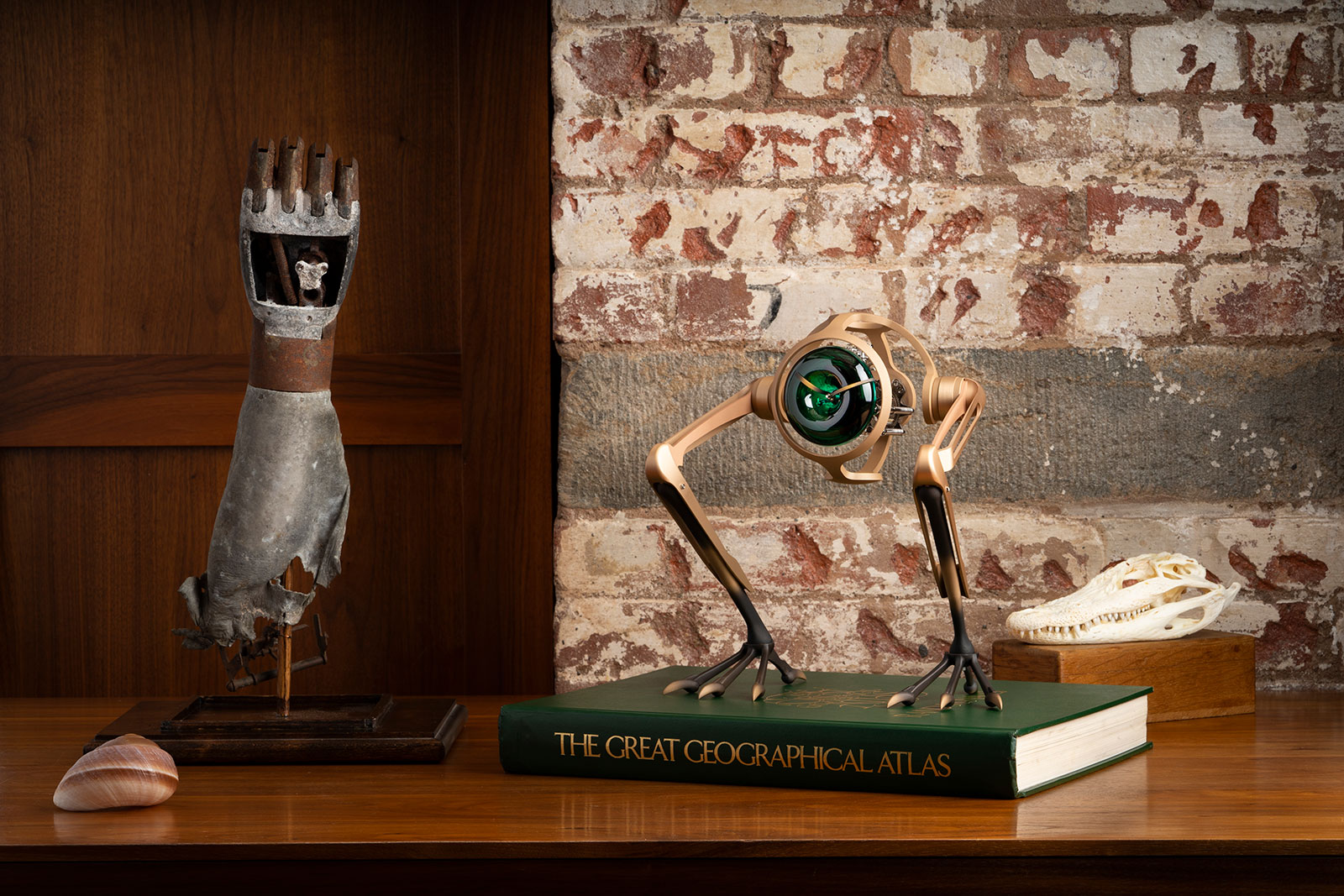 Massena Lab was founded by watch industry veteran William Rohr – who is better known by the pseudonym William Massena – in 2018, with the purpose of collaborating with notable independent watchmakers, and perhaps one day make its own watches.

Having made its debut with Habring2 , Massena Lab has just announced the T-Rex Bronze, a 15-piece variant of the quirky MB&F table clock launched last year. Best described as a hand-blown Murano glass eyeball inside a bronze socket with legs, the T-Rex is made by L’Epee 1839, who is also responsible for all of MB&F’s other clocks.

The T-Rex is an offbeat, statement piece for the desk, but powered by old-school mechanics – a key-wound, eight-day movement made by L’Epee 1839, a clockmaker founded in, well, 1839. That blend of contemporary creative and classic mechanics makes it cool. 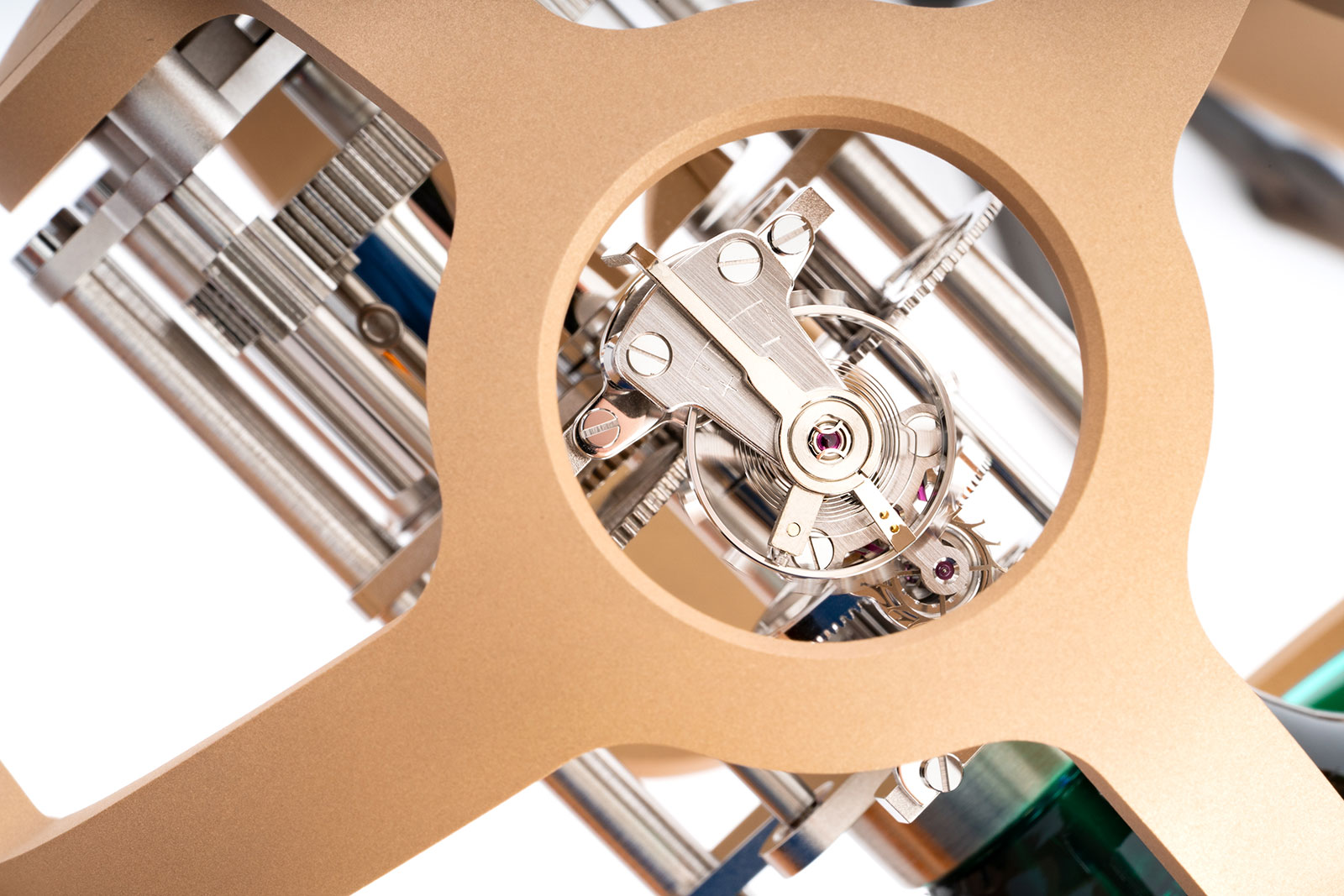 But the Massena Lab edition is a departure from the usual MB&F clock style, which is dominated by metallic silver or black, resulting in a highly mechanical look. The Massena Lab T-Rex replaces the steel of the original version for frosted bronze and “aged” feet, giving the clock a striking, steampunk aesthetic. 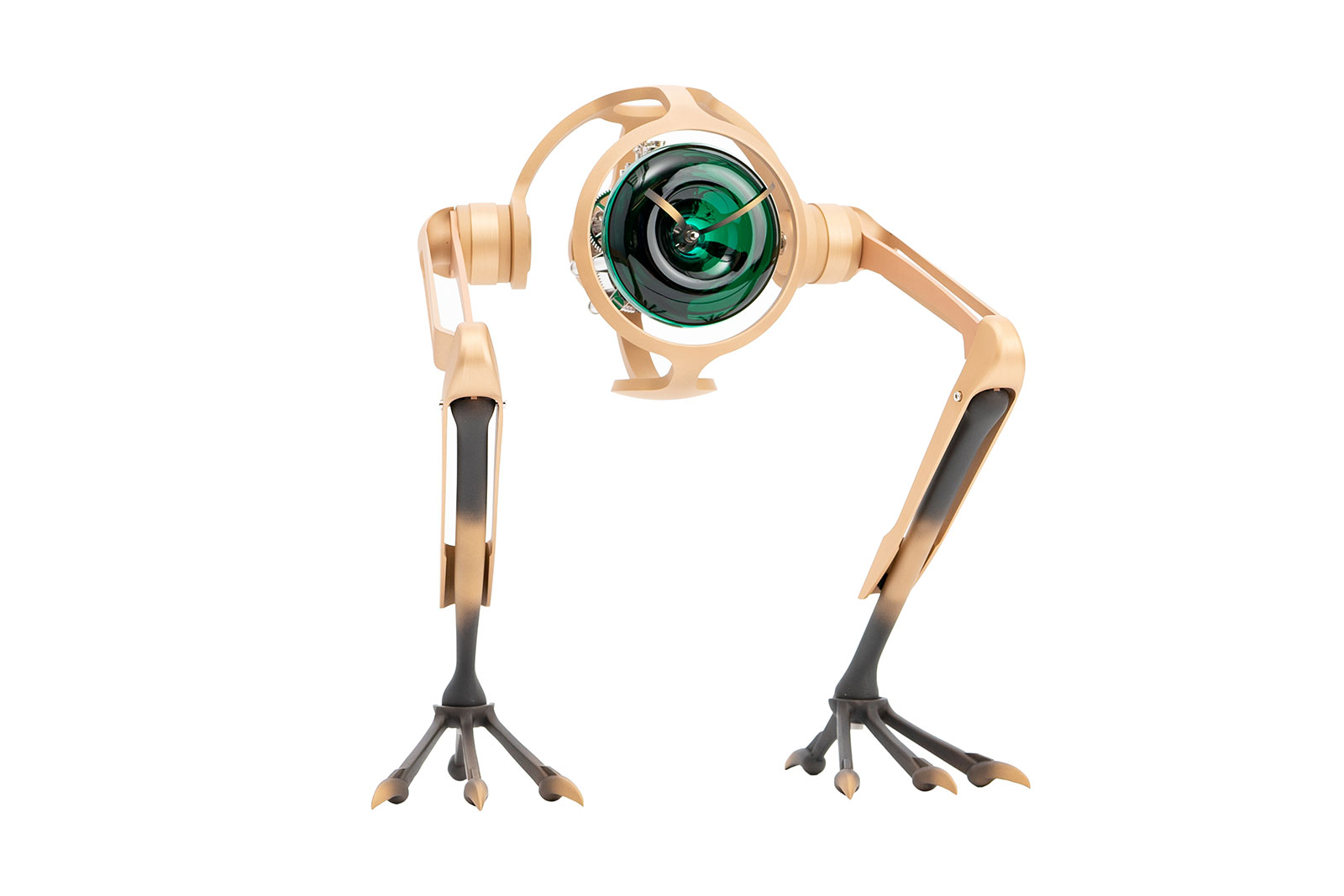 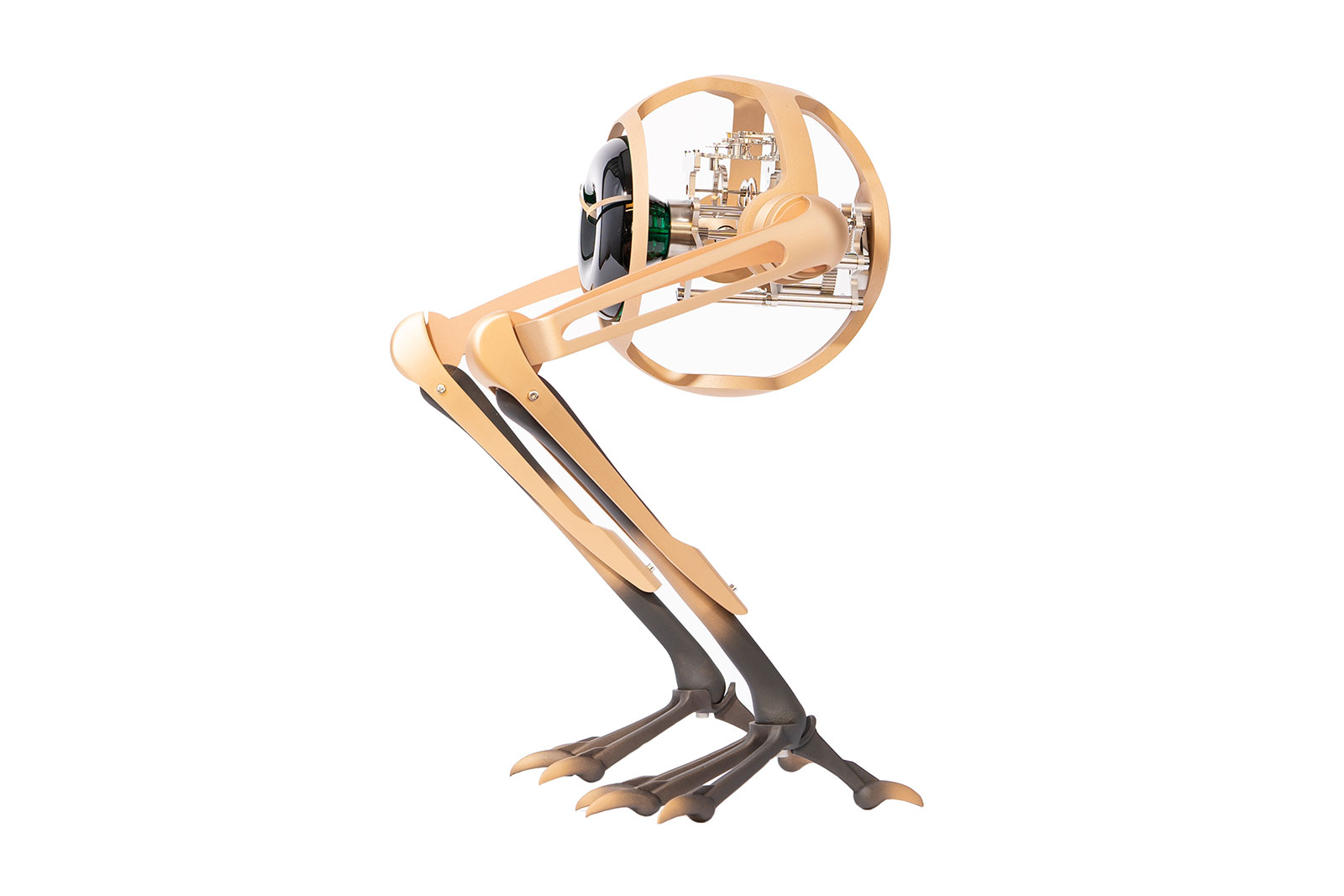 Standing a little under 27 cm high, the T-Rex weighs about 2 kg. According to MB&F founder Maximilian Büsser, the form was inspired by a bipedal Christmas ornament on his desk. Freelance watch designer Maximilian Maertens then created the clock, relying on images of an actual Tyrannosaurus Rex to design the clock’s legs.

The frame and legs are made entirely of bronze, with the legs having been treated by to create a dark brown patina that’s unique to each specimen. A protective layer over the bronze, including the legs, renders the finish permanent, preventing the oxidisation that forms on untreated bronze. 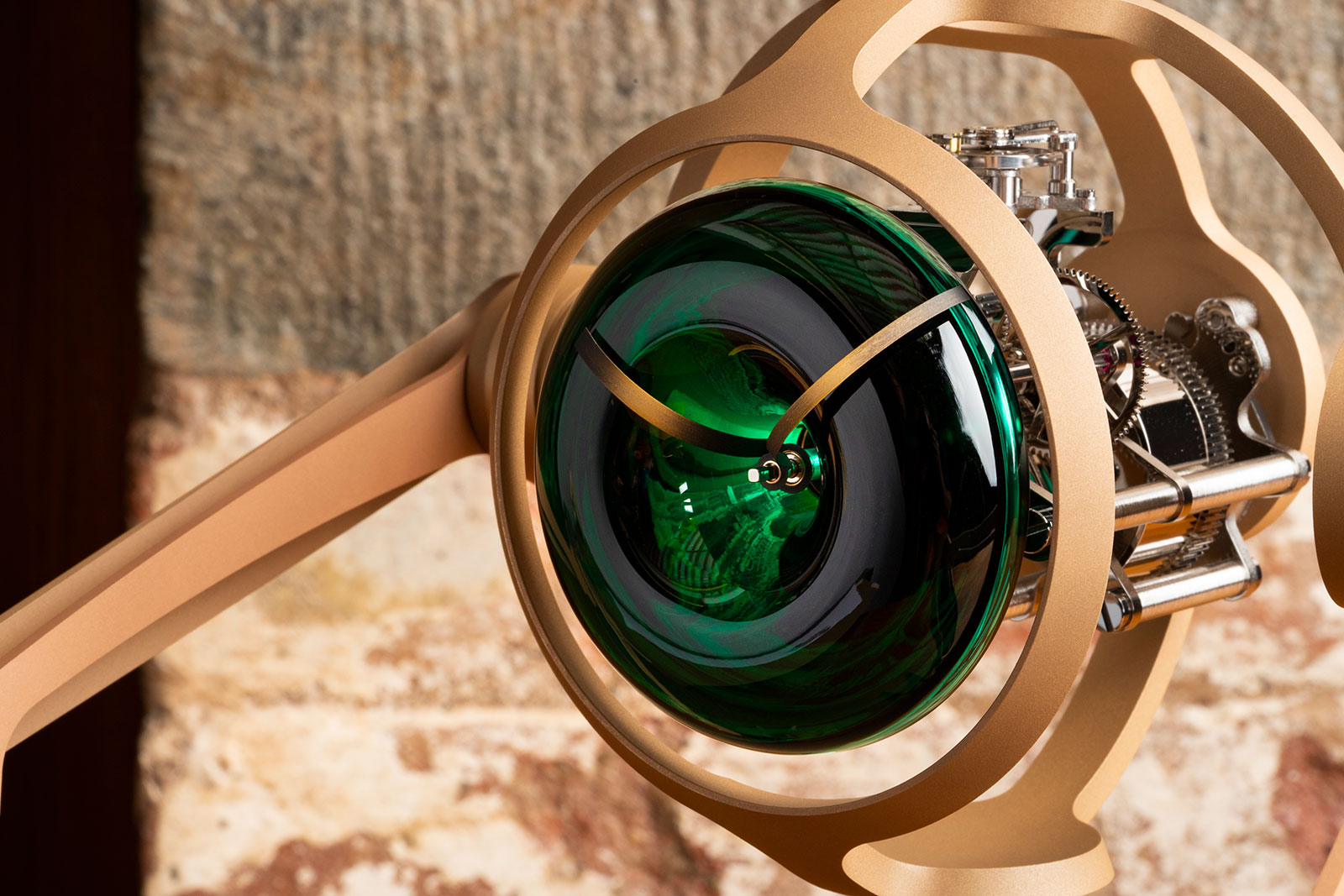 The “face” of the clock is a dome of dark green Murano glass, with a pair of curved hands that stretch over the dome. Right behind is the exposed movement wound via a key that goes into a socket in the back. The same key also sets the time, but via a socket on the axis for the hands. 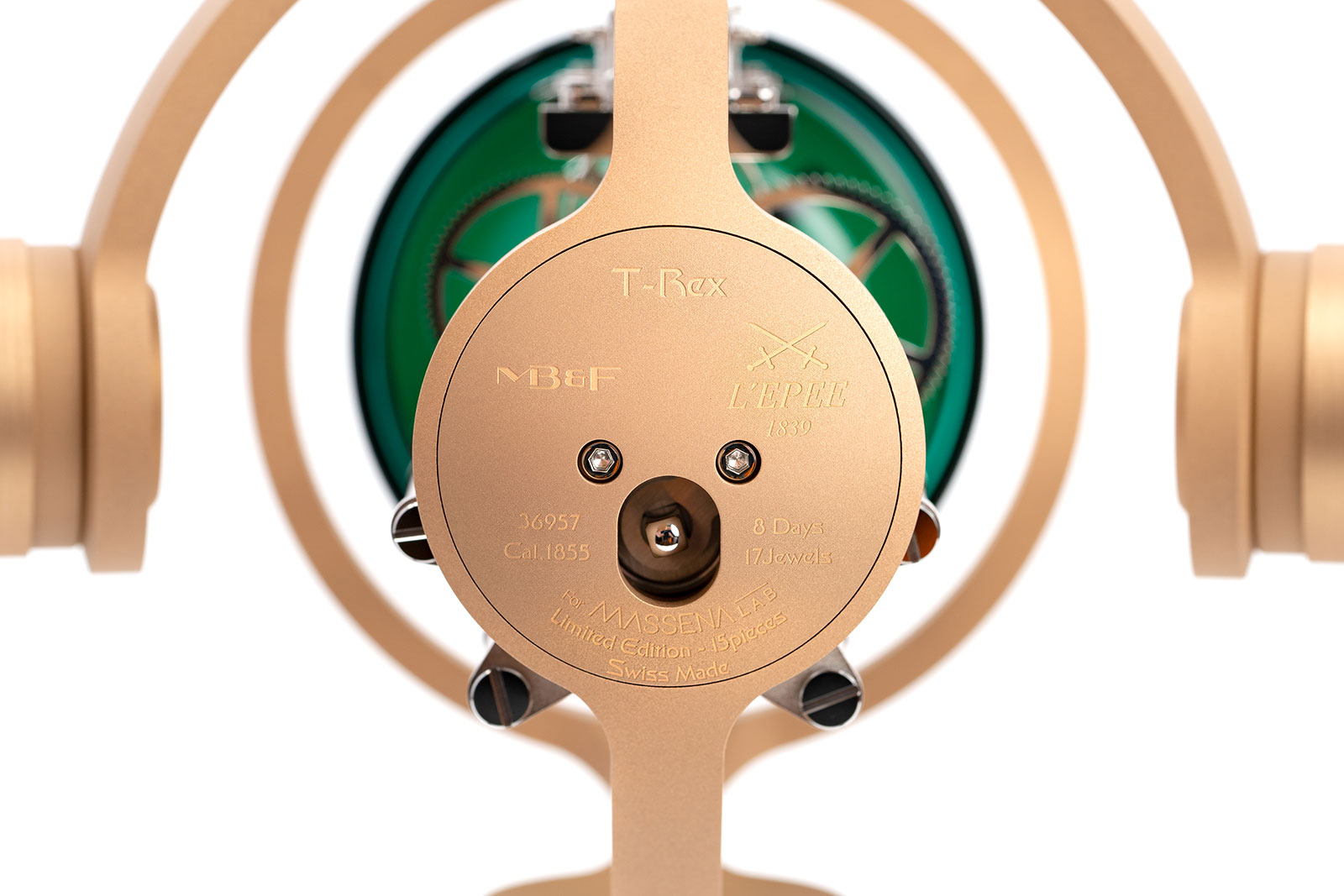 Limited edition: 15 pieces
Availability: Direct from Massena Lab, or at Hodinkee and Watches of Switzerland
Price: US$27,000