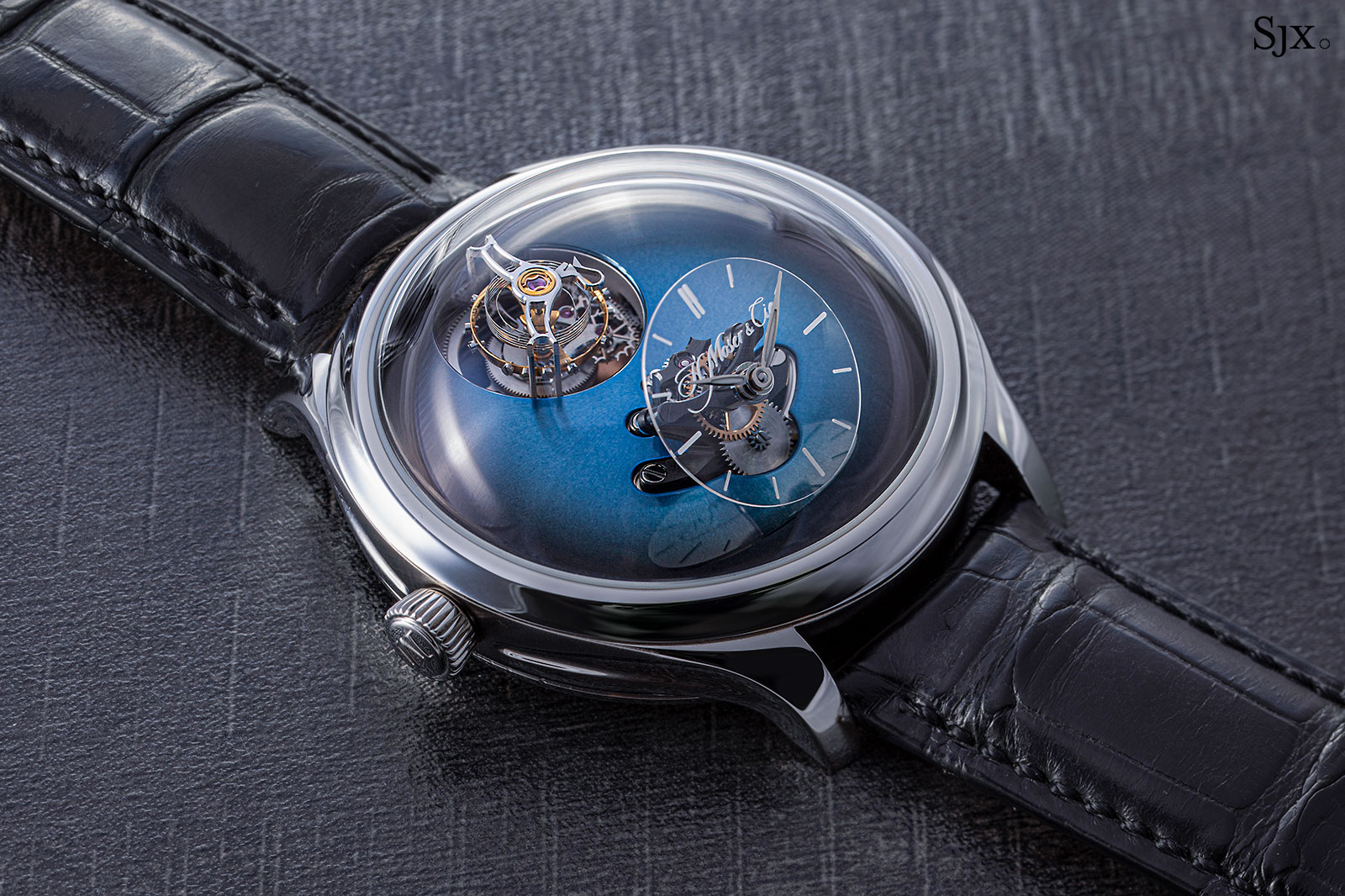 Long rumoured and much anticipated, the tie-up between MB&F and H. Moser & Cie. is here. Moser applied its sensibilities to the MB&F LM101, while MB&F revamped its Moser Endeavour Tourbillon.

The result is the H. Moser × MB&F Endeavour Cylindrical Tourbillon, which is more than a new, smoky paint job. It is indeed a Moser tourbillon enhanced with MB&F design, but the redesign goes beyond the styling. An indirect going train was added to reposition the time display, and more importantly, the tourbillon has been reconstructed to feature a cylindrical hairspring, which is surprisingly cool in action. 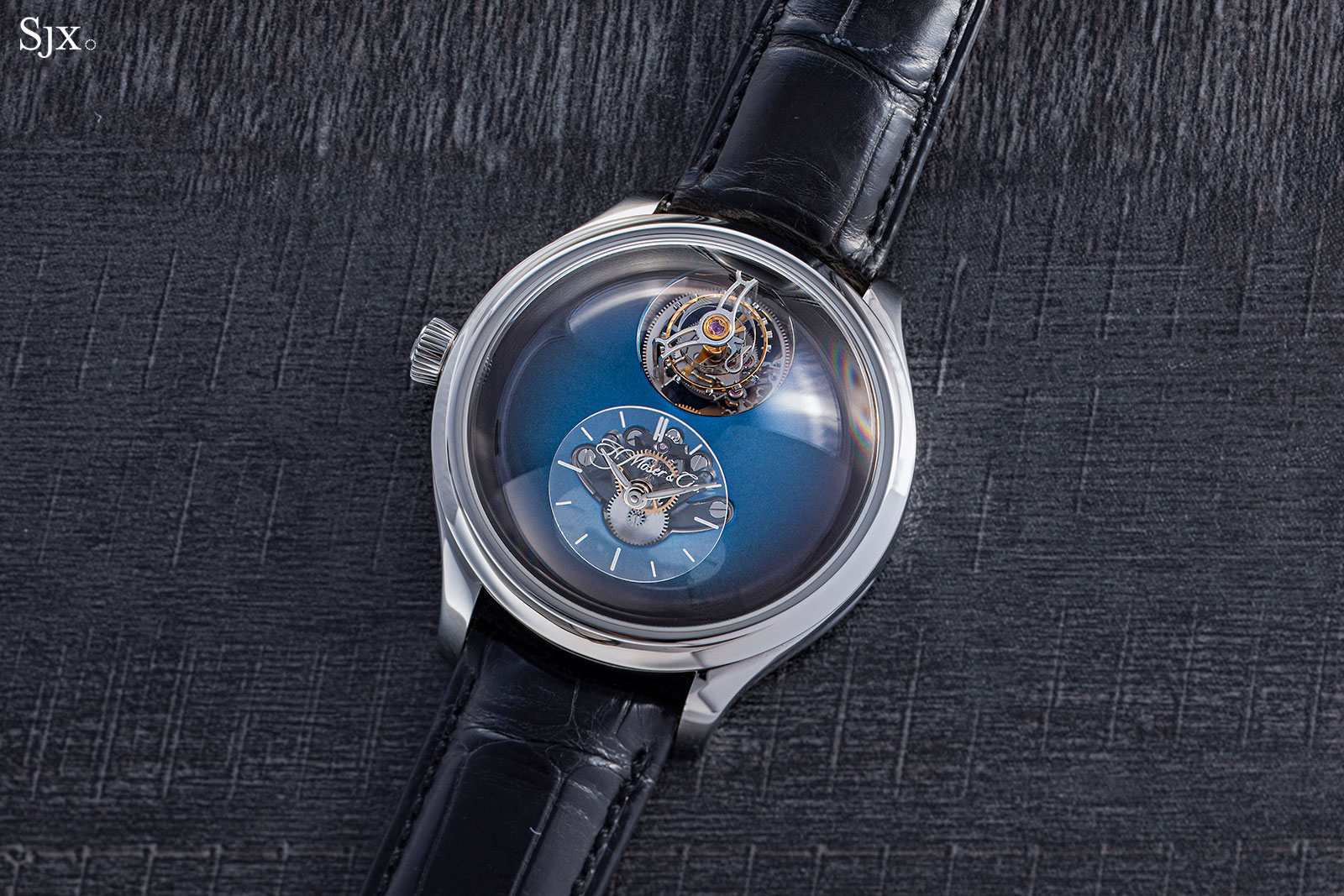 When I found out about the Moser and MB&F collaboration some months ago, I expected it to be a wristwatch with a fumé dial and MB&F-inspired detailing – and it is. At a distance, it is reminiscent of the recent MB&F LM Thunderdome Triple-Axis Tourbillon, which is substantially more complicated, but also substantially more expensive.

Up close, the details reveal it is a Moser. Some details, like the fumé dial, are obvious, while others, like the curved hairspring stud holder and two-tone balance wheel, are more subtle.

The watch is not as predictable as the MB&F x Moser formula might imply. Despite sticking to Moser’s minimalist leanings, the face manages to be thoroughly three-dimensional, though legibility is so-so. Most importantly, it boasts a compelling tourbillon – that is really impressive in motion – while being less expensive than the typical watch with fancy tourbillon.

The only drawback is the position of the crown. A necessity due to the base movement – which was originally a movement with the tourbillon at six o’clock – the destro crown is just odd. The five variants of the Endeavour Cylindrical Tourbillon

The case is a largish 42 mm in diameter, though it doesn’t feel quite as big as the number sounds. With the enormous crystal, the total height is 19.5 mm, but the case and bezel are only 13 mm high, giving it a relatively thin profile visually. And because the case is steel, the watch is also light and easy to wear.

Finished neatly and competently, the case is the typical Moser design, with the same unusual detail that manages to make a round case slightly more interesting. The sides of the lugs are concave and polished, contrasting against the brushed flanks of the case. But the lugs are longer and narrower than usual, giving the case a more streamlined profile. 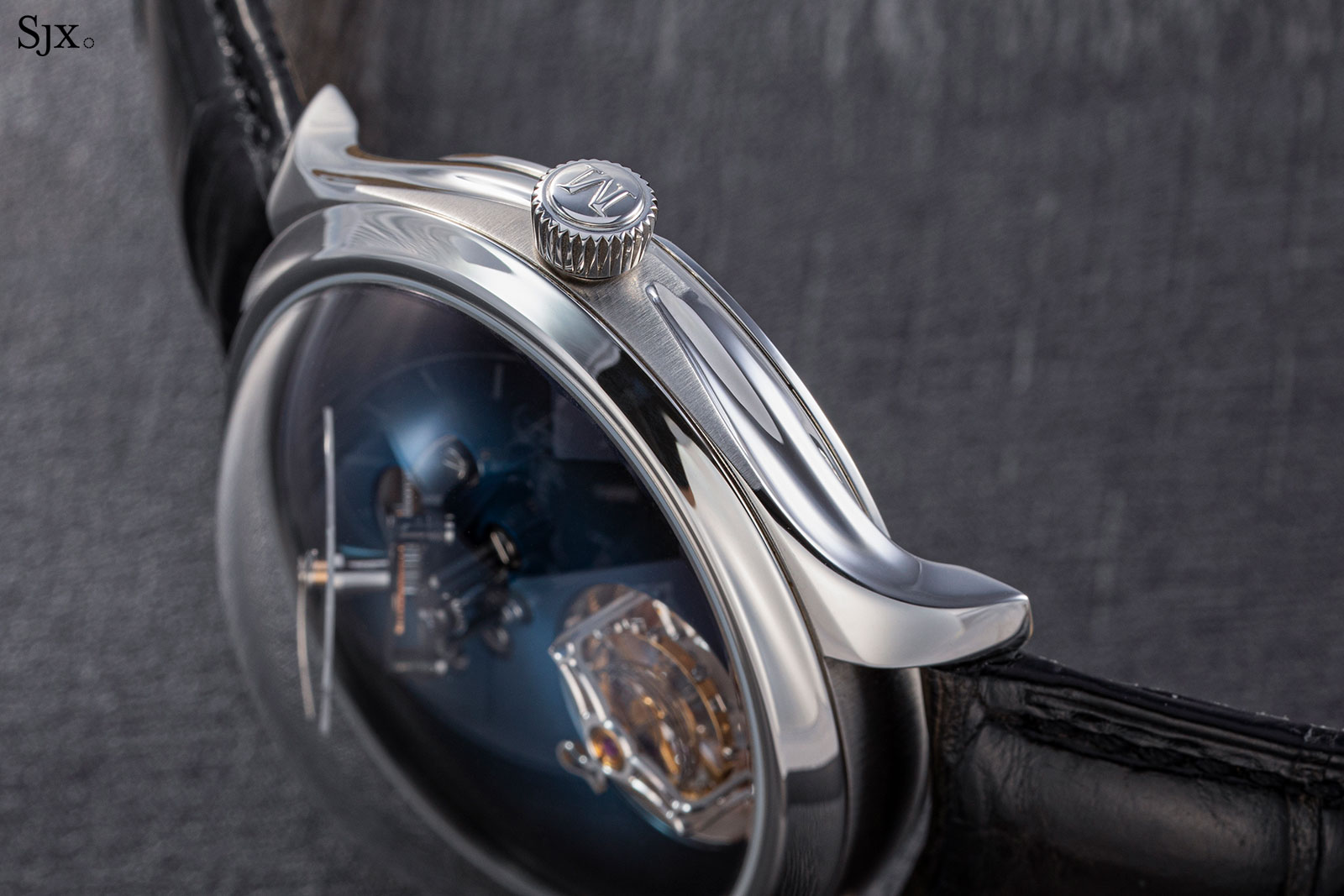 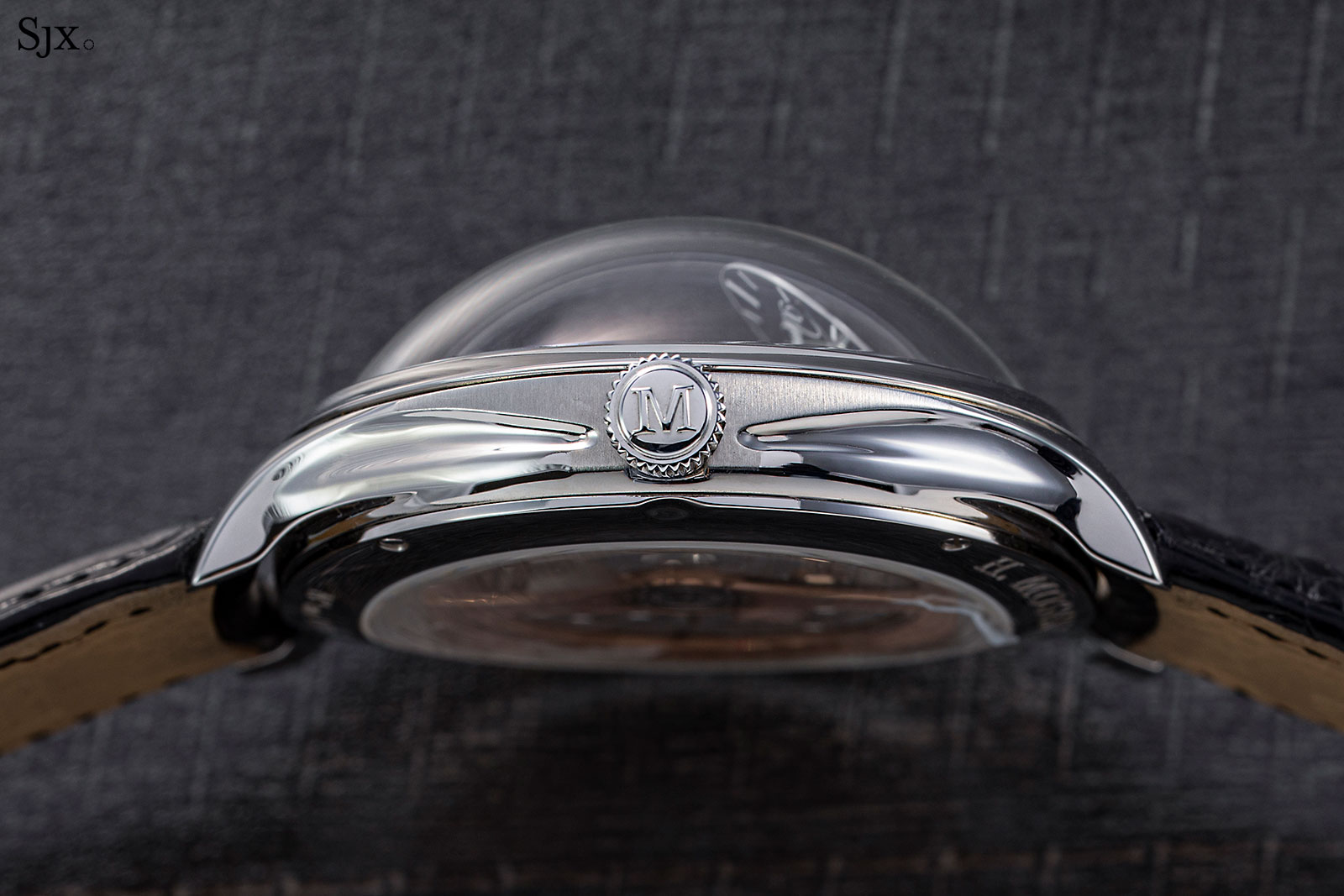 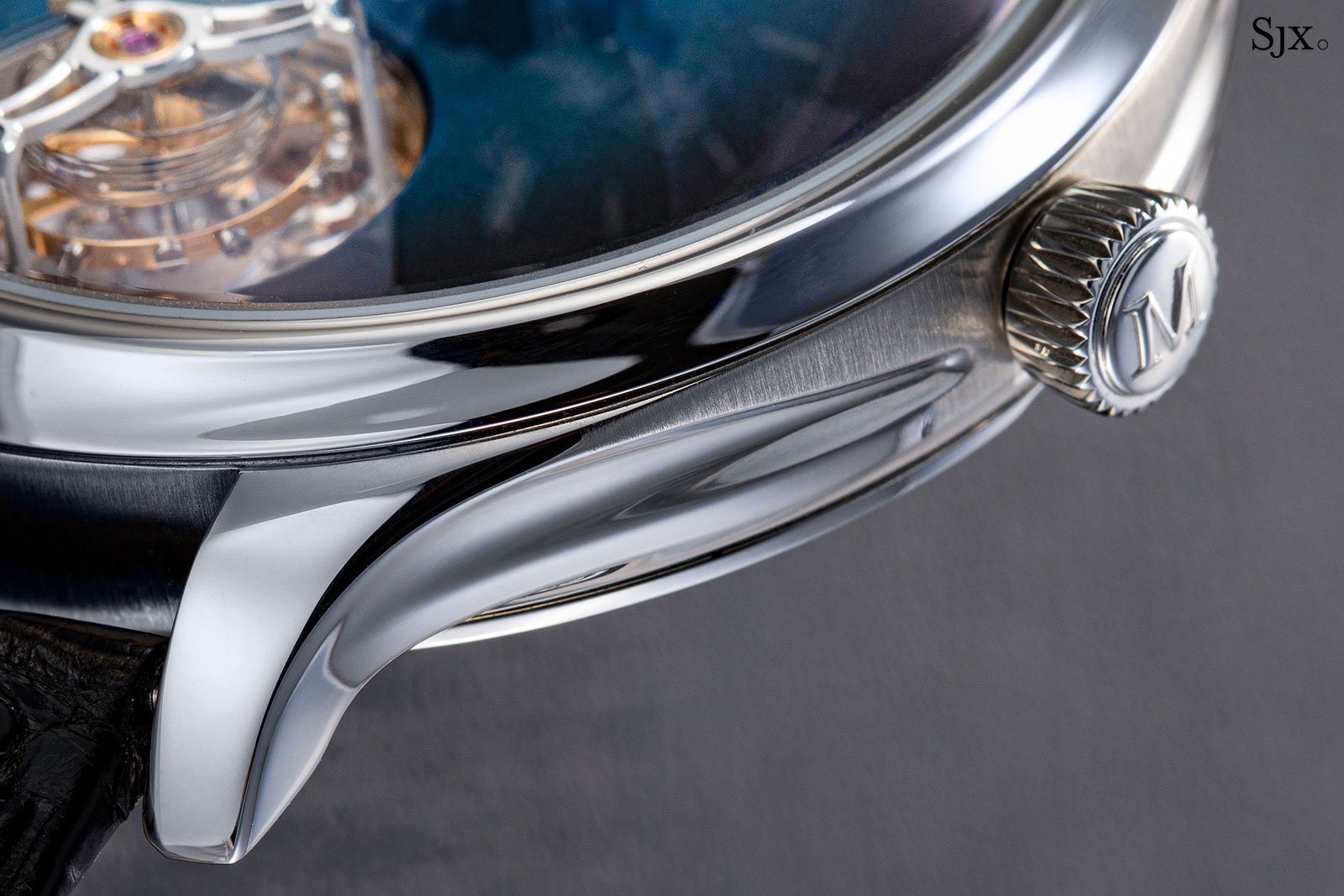 Reading the time, however, is usually a challenge, because the sub-dial for the time is both small and transparent. In contrast, the expansive main dial is hard to miss. It’s striking and available in four colours, all executed in Moser’s likeable fumé finish with a graduated colour that darkens outwards. But legibility isn’t really the point of such a watch. Design is, and in that respect, the crown position is odd. While a left-handed crown is acceptable in military-inspired watches for various historical reasons, it looks odd here and is only justified because of the base movement, making it feel like a bit of a compromise. 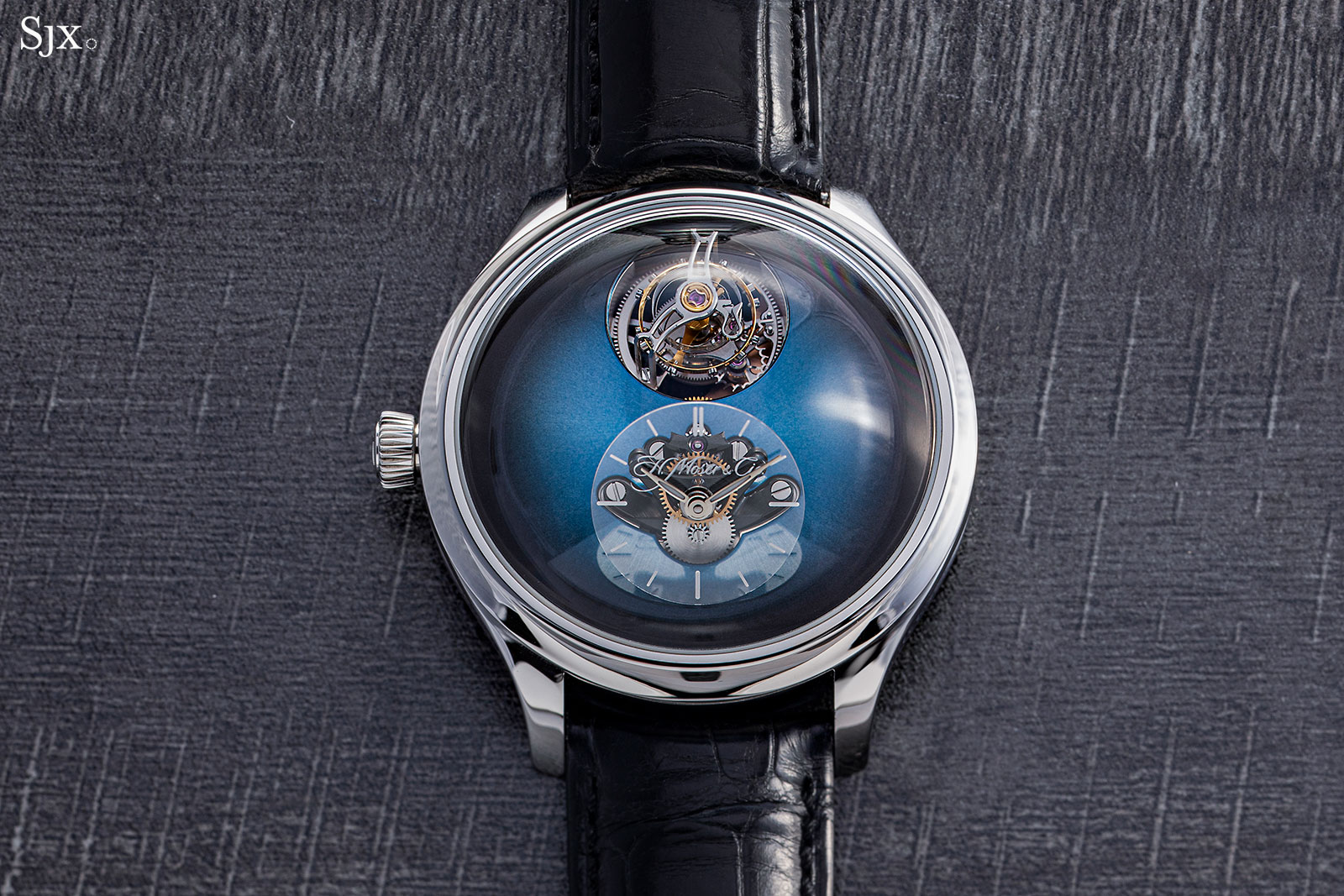 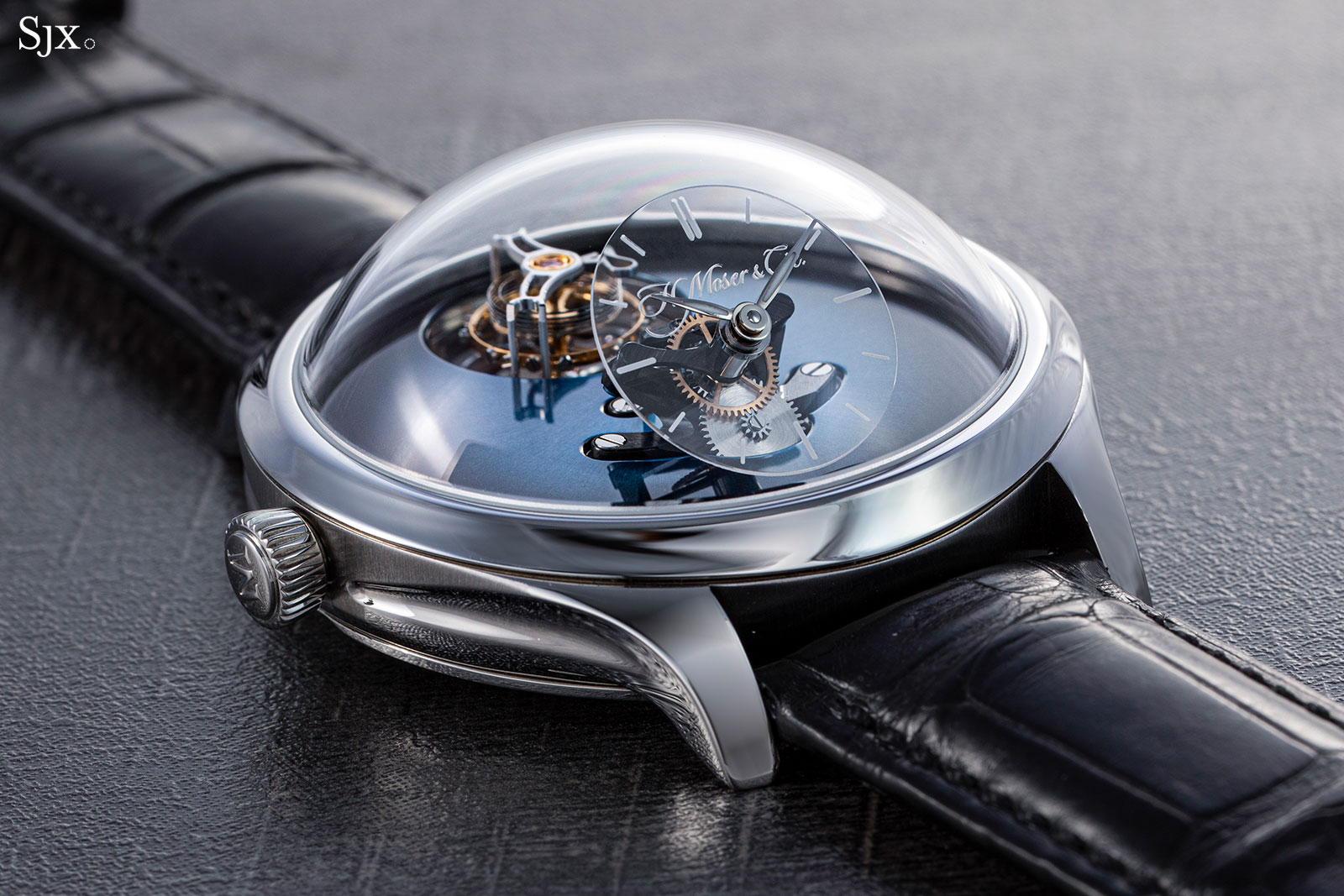 The crown is where it is because of the movement.

Under the large crystal and smoked dial is the HMC 810, which is derived from Moser’s standard tourbillon movement found in the standard Endeavour Tourbillon. The movement had to be rotated 180 degrees in order to have the time display at six and the tourbillon at 12, explaining the placement of the crown. 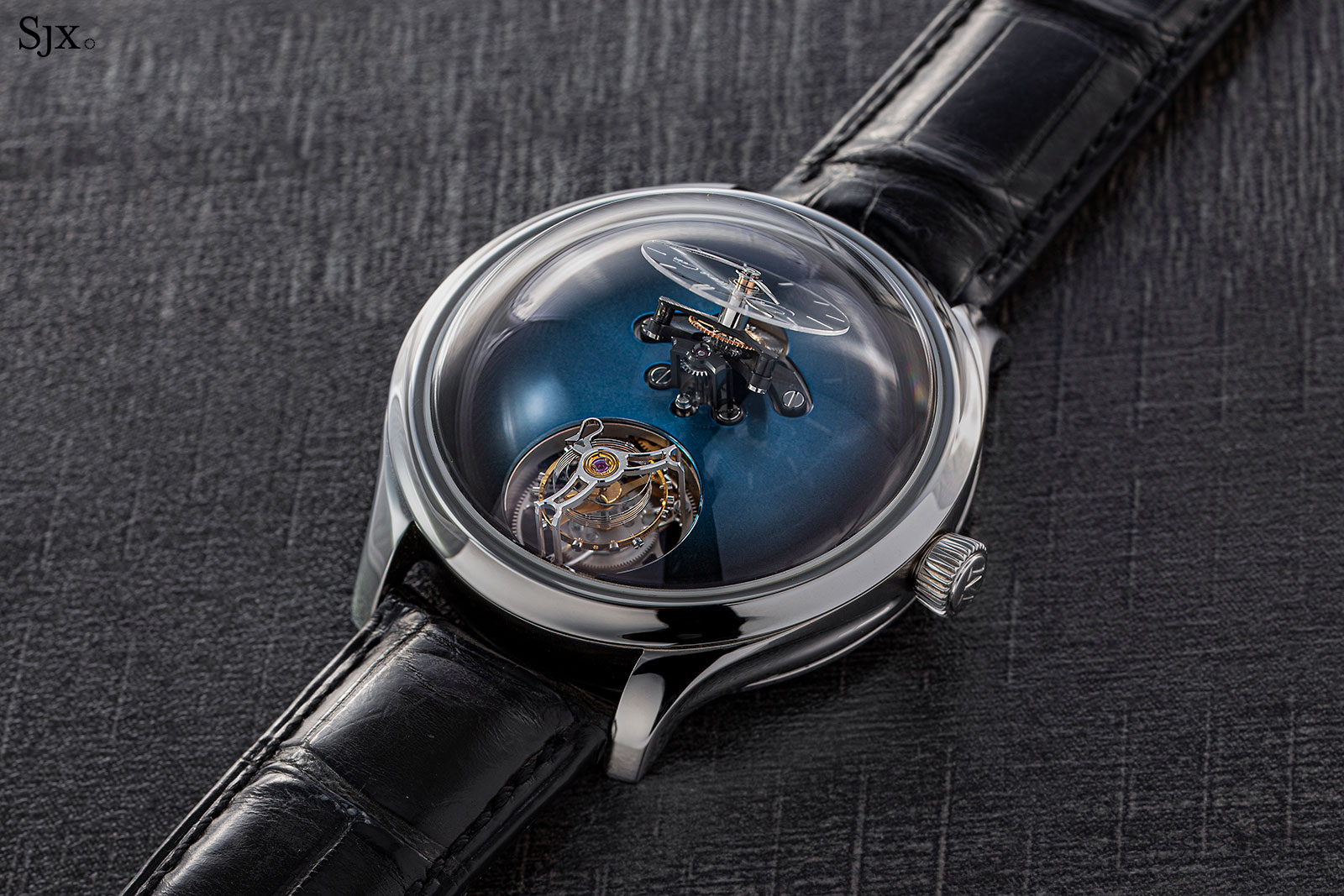 From the back, both movements look identical, because all the the changes are on the front. One is the additional going train that shifts the hands outward and upward, allowing for the off-centre, satellite-dish display. Despite the secondary going train for the hands, setting the time via the crown feels pretty much the same as on a standard watch, without any excessive play, which is a good thing, naturally. More interesting visually, but pretty straightforward technically, is the revamped tourbillon. Retaining the same wide “V” shape on top, the carriage has been extended vertically to accommodate the tall, cylindrical hairspring with overcoils at both ends.

The movement is in-house, right down to the all-important hairspring. Like all Moser hairsprings, the cylindrical example found in the tourbillon is made by Precision Engineering, Moser’s sister company that is a significant supplier of hairsprings, particularly to independent brands. On the tourbillon cage: the curved hairspring stud carrier designed by Andreas Strehler, the independent watchmaker who worked with Moser in the early years of the company

Invented by English watchmaker John Arnold in the late 18th century, the cylindrical hairsprings was mostly found in marine chronometers of old, because it expands and contracts, or “breathes”, in an almost-perfectly concentric manner. As a result, a cylindrical hairspring is isochronous, with a period of oscillation that is constant, regardless of amplitude. Put simply, the time taken by the balance to complete one back-and-forth motion is identical, regardless of the angle travelled by the balance, meaning the oscillation of the balance stays constant even as the power reserve runs down.

Beyond the historical and technical details, the cylindrical hairspring looks cool. And it is highly visible from all sides, because there’s no upper tourbillon bridge, and the arms of the cage are narrow. The visual appeal of the tourbillon is probably the highest amongst tourbillons within this price category. 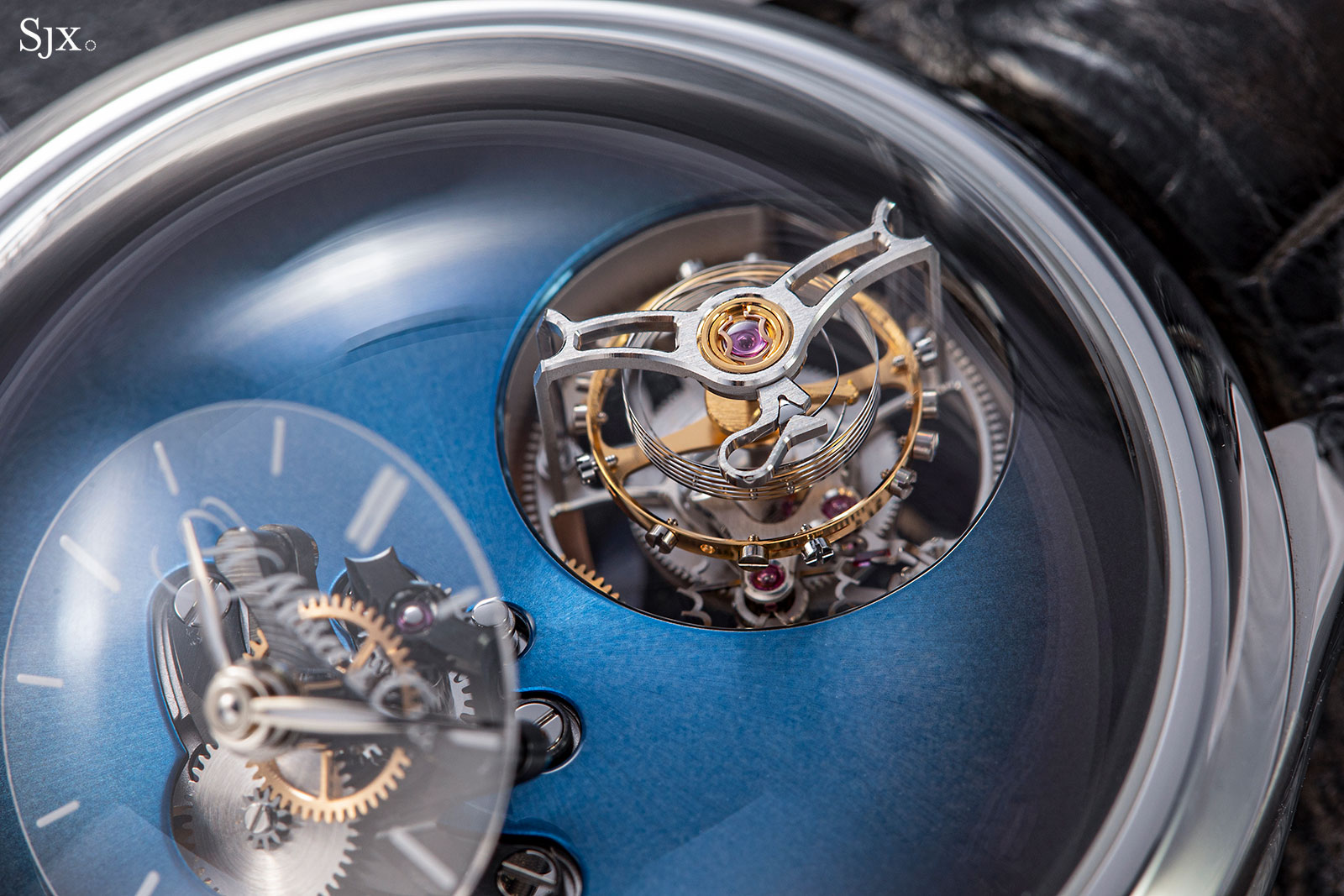 The movement finishing is very much like Moser’s other watches – appealing, concise, and sharply executed by machine. The tourbillon cage, for instance, has wide, polished bevels with faint machining marks, indicating the bevelling was done with a milling machine. Overall, the decoration is smartly done and appropriate for a complicated watch in this price category. The Endeavour Cylindrical Tourbillon is sharply focused on what it does well – namely a single-axis tourbillon that still manages to be three-dimensional and interesting. Add to that the smoked dial and the result is a striking watch.

The focus also allows it to be reasonably priced as such watches go. With a retail of just under US$80,000, it is not an inexpensive watch, but in the realm of exotic tourbillons it is highly competitive, and one of the most affordable in fact.

Correction June 9, 2020: The hairspring stud carrier is not produced by Uhrteil, as was stated in an earlier version of the article.