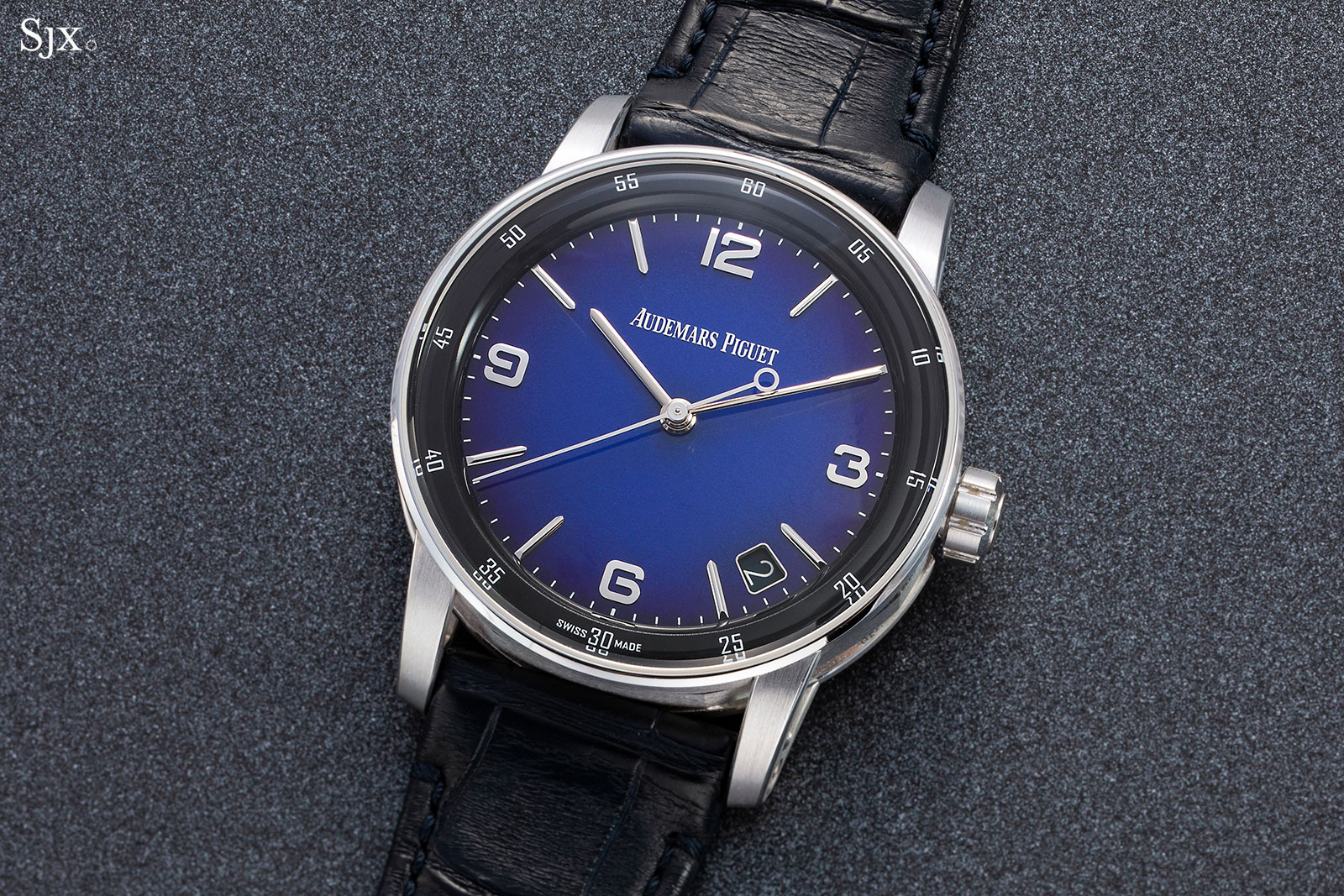 When Audemars Piguet launched the Code 11.59 last year, the best looking of the collection were the two watches with smoked enamel dials, which were the minute repeater and flying tourbillon. The base models, on the other hand, were plain and looked a bit flat.

But as proof that dial colours and shading are as important as design, the Code 11.59 Bolshoi Limited Edition is the three-hand base model, but with a smoked blue enamel dial – and it is a good looking watch, with the downside of a substantial price premium for the enamel dial.

Launched in November 2019 to mark the 10th anniversary of Audemars Piguet’s sponsorship of the Bolshoi Theatre in Moscow, the parent organisation of the world-famous Bolshoi Ballet, the Code 11.59 Bolshoi edition was a limited edition of 99 pieces. And it’s the only base-model Code 11.59 with an enamel (or smoked-finish) dial to date, though that might change in the future. 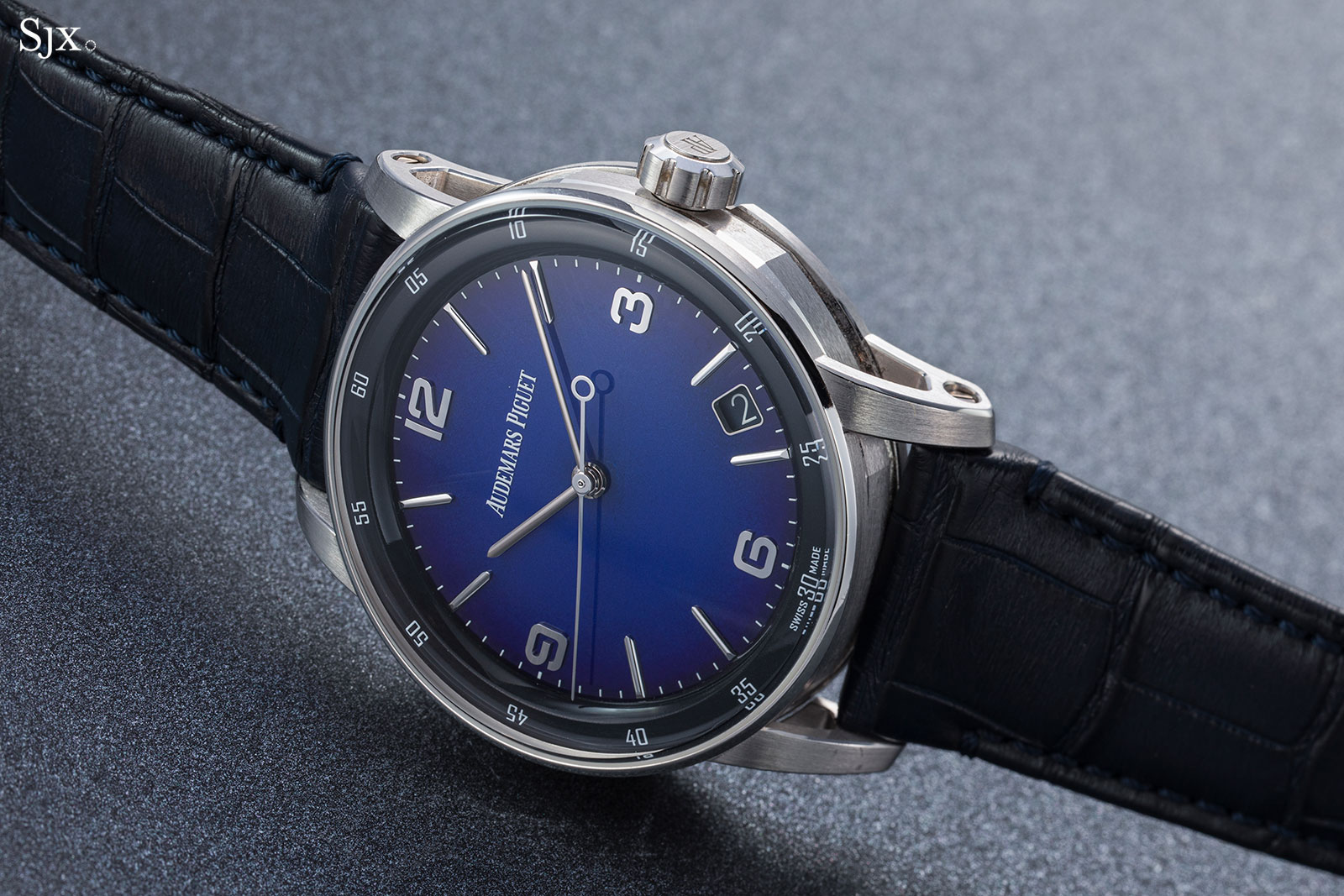 The Bolshoi edition is surprisingly attractive, even though only a single element has changed. Though it keeps the design exactly the same, the Bolshoi edition fixes the bland looks of the original simply but effectively with a fired enamel dial.

While the smoked finish is not new – H. Moser & Cie. does it all the time and now MB&F does too – the dial of the Bolshoi edition is fired enamel, which is doubtlessly difficult to produce and tangibly impressive. 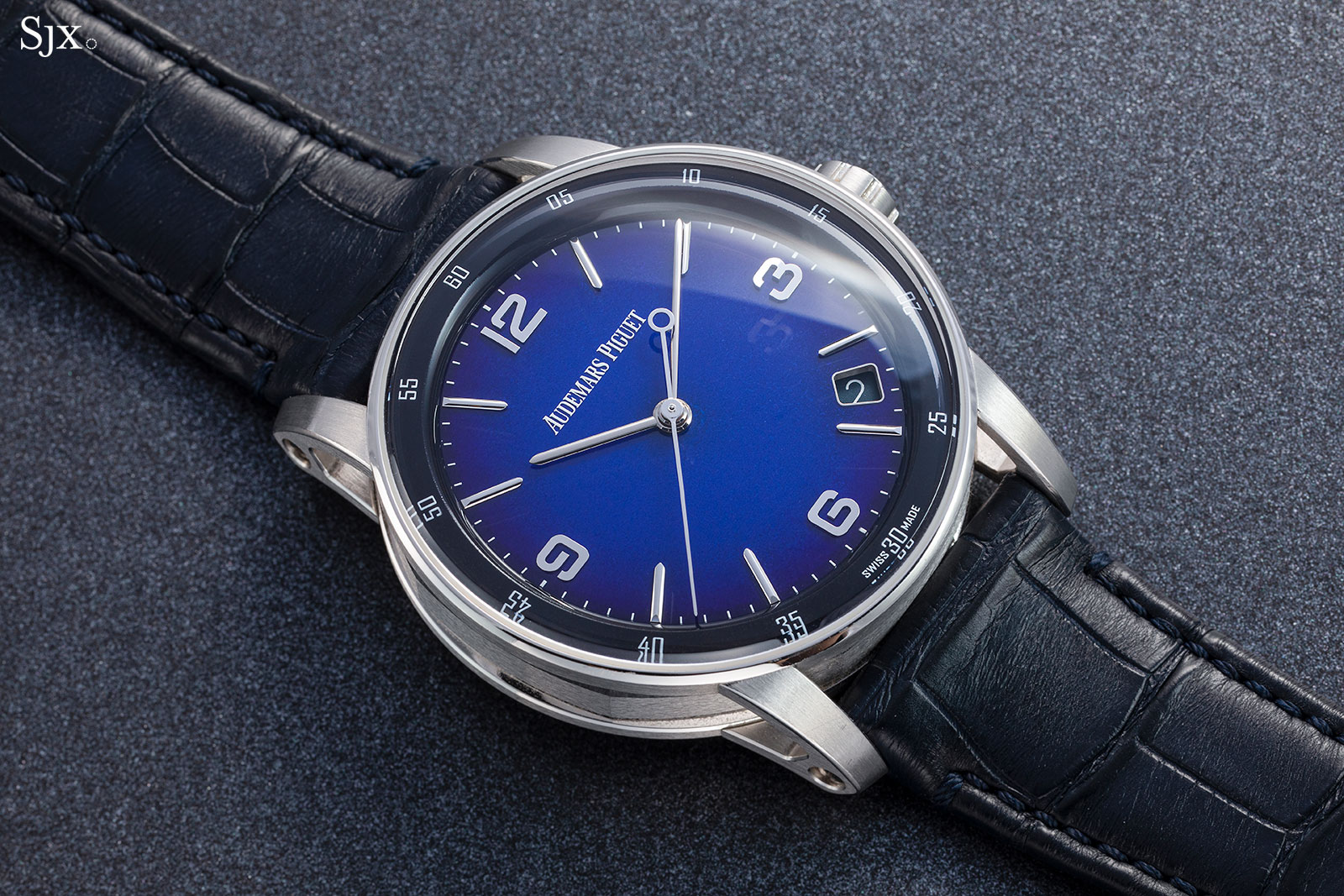 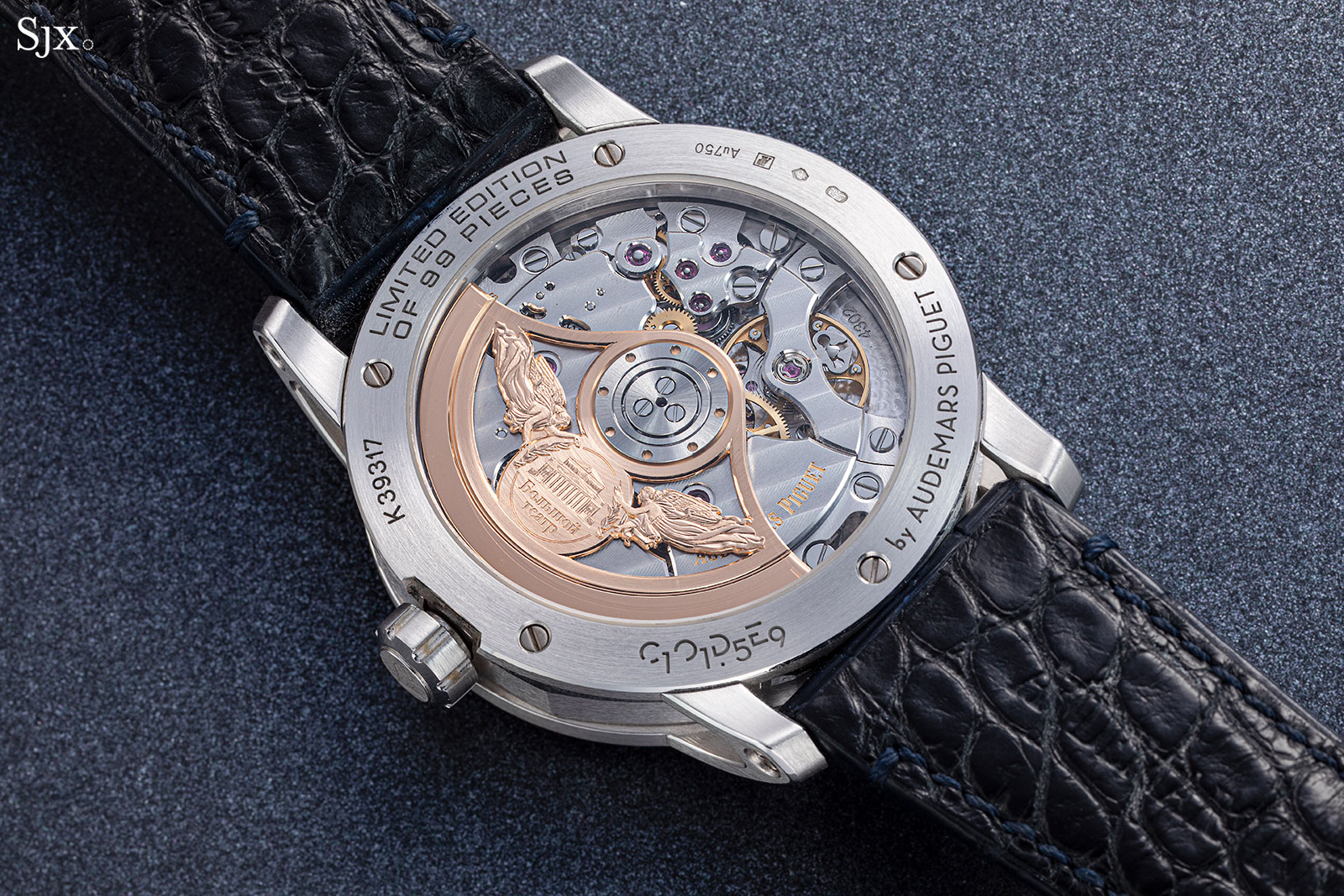 Because everything else remains the same as the standard edition, the Bolshoi edition also has the same strengths and weaknesses, like a too-chunky case but a sharply-executed, in-house movement.

But the Bolshoi edition is too expensive compared to the standard model. The price hike for the enamel dial (and the hand-engraved rotor) is almost 55%, or just under US$15,000. Even by AP’s lofty pricing conventions that is a lot.

With the same case as the standard version, the Bolshoi edition looks and feels identical on the wrist. Though the watch isn’t overly large at 41 mm by 10.7 mm, it feels a bit bigger than it measures. At the same time, it is also feels solid in the hand.

The sapphire crystal is curved on two planes – something Audemars Piguet often cites as a key feature of the watch – that creates an interesting but not noteworthy optical effect. Fortunately, the crystal is coated with an antireflective coating, so the curvature doesn’t affect legibility at all. 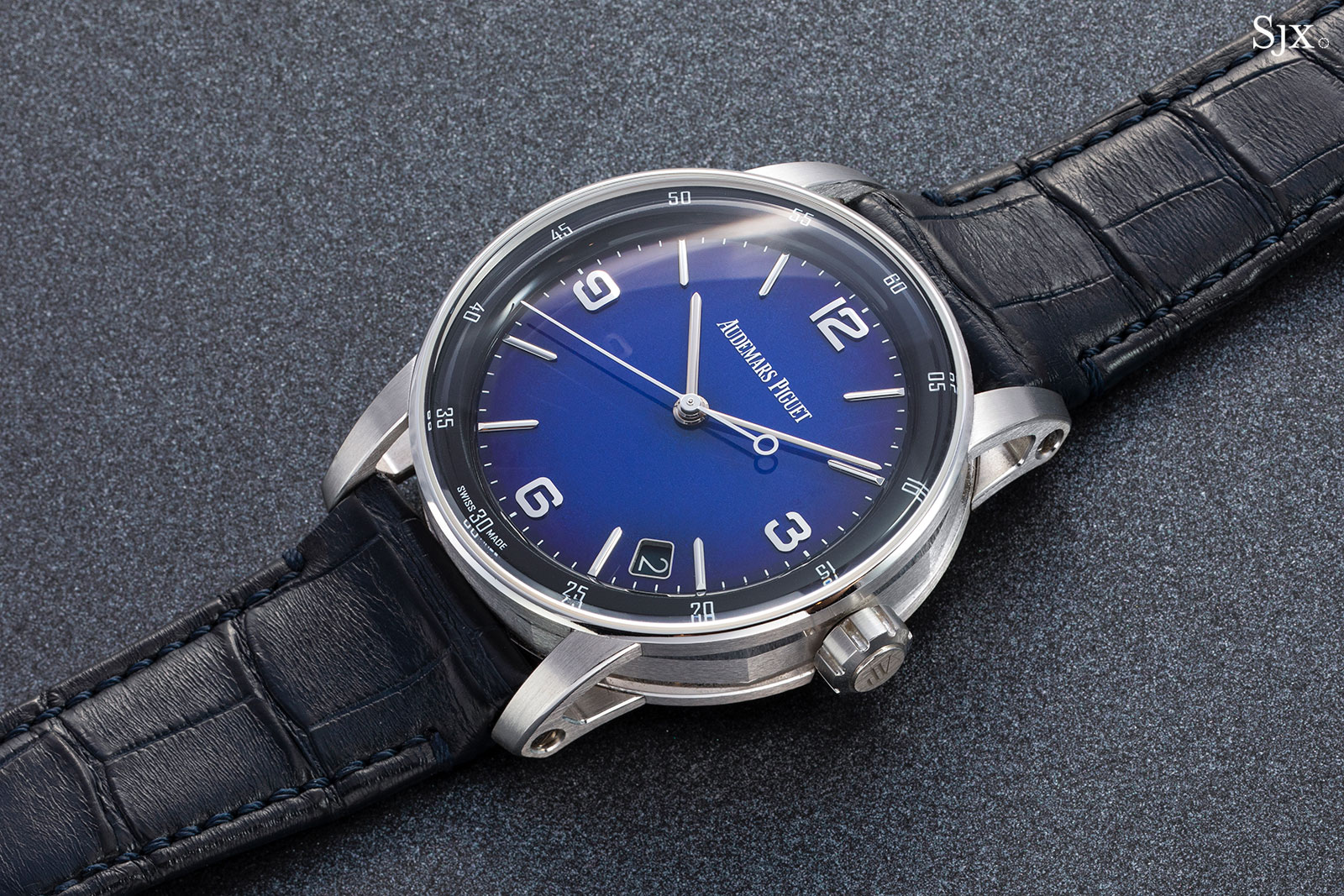 At arm’s length, what does stand out is the case finishing. The numerous polished bevels along the various edges mean the case catches the light at many angles, making the quality of finishing obvious. That is a rare quality in a conventionally-shaped round watch.

Simultaneously, the complicated case construction means the nooks and crannies accumulate dust and grime swiftly – which you also notice when it’s on the wrist.

The dial is a splendid piece of craftsmanship. It has the same look that other brands usually execute with lacquer, but instead in fired enamel.

A rich, compelling blue at the centre, the dial darks towards the edges, with an even graduation of tone around the dial. Such an effect is achieved not with darker enamel, but a slightly thicker layer of enamel at the edges.

The raised flange for the minute numerals is black lacquered, rather than enamel, but the colour matches the dial well, resulting in an almost-seamless transition from dial to flange. 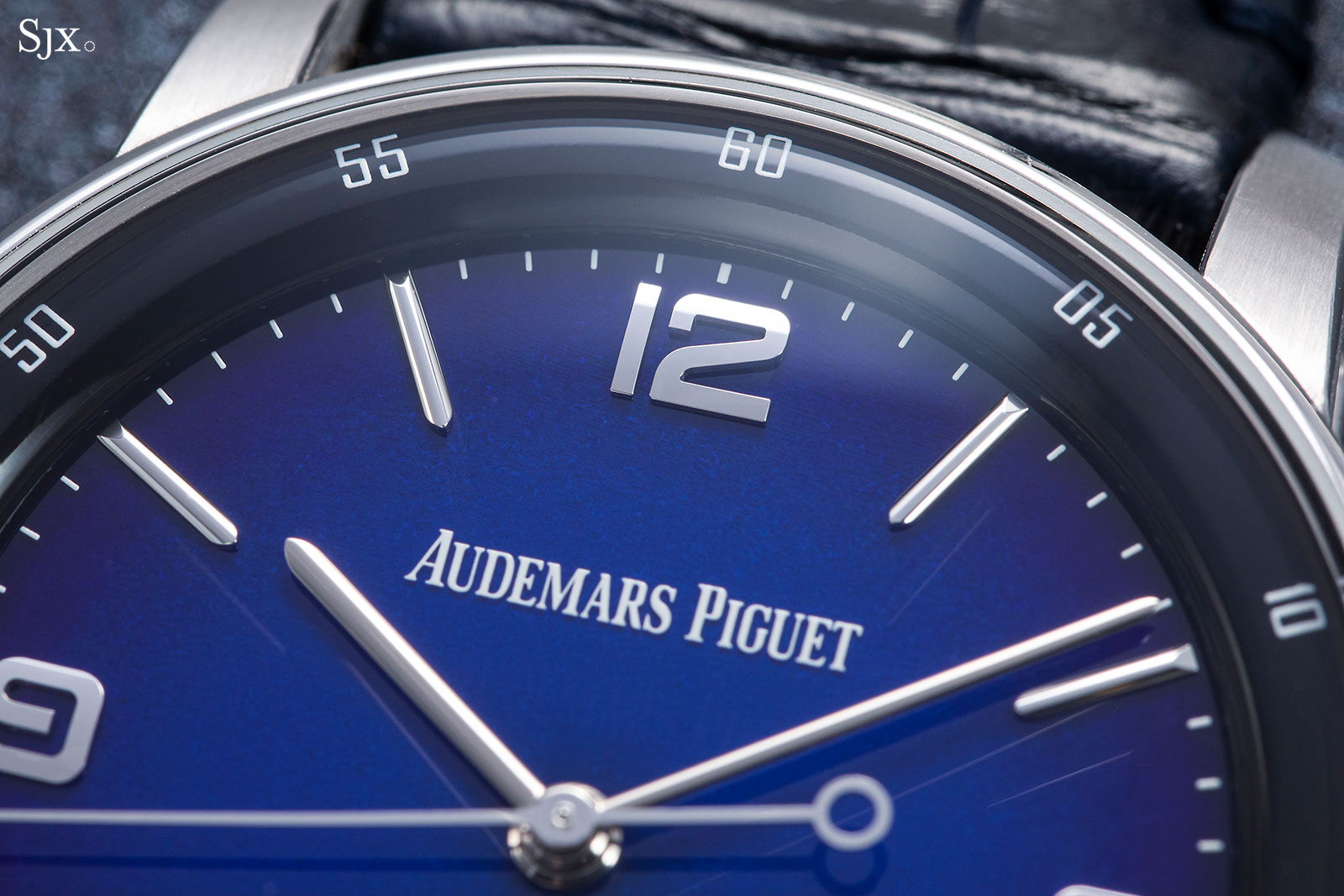 Examined at up close, the surface of the dial is smooth and reveals only tiny, subtle imperfections that are inevitable in enamel, but hardly obvious here. The quality is especially obvious when compared to other similar smoked enamel dials, like on the recent Montblanc 1858 split-seconds chronograph, which has a less-pronounced graduation of colour, along with noticeable dark spots in the surface.

Add to that the applied hour markers in solid white gold, as well as the neatly-framed date, and the result is a dial that’s exceptionally well done. It’s also worth noting that both the minute track and Audemars Piguet logo are in enamel print, doing away with a metal-deposit logo appliqué that’s a hallmark of the standard model As emphasised during the launch of the Code 11.59, the case is complex, finely finished, and one of the crucial elements of the Code 11.59. That is all true, but much of the case quality isn’t apparently unless examined up close.

The case is essentially a sandwich, with a round bezel and back containing an octagonal case middle. The lugs are skeletonised and attached only to the bezel; they barely touch the case back. The construction allows for significant fine finishing of the case, including polished bevels on the inner edges of the skeletonised lugs, polished countersinks for the lugs screws (which have octagonal heads), as well as polished top and bottom edges for the octagonal case middle. And all the polished edges sit next to brushed surfaces, separated by a sharply defined border between the two.

All of that is impressive – in fact, the quality of finishing is on par with a Royal Oak – but excessive for a round case, since much of the detail will go unnoticed, for two reasons. One is the fact that the case looks like a simple round case at a glance, and also because the Code 11.59 received so much flak when it was launched. That is unfortunate.

The downside of the case construction is obvious when you examine it up close – it traps dirt easily, and is difficult to clean. Some of the dirt looks like it can only be removed by disassembling the case and tossing the parts into an ultrasonic cleaner. From a strategic and technical perspective, the Code 11.59 was notable for being the first models to feature the latest-generation Audemars Piguet movements – the cal. 4302 for the three-hander with date, and the cal. 4400 for the chronograph.

Made on a newly-set up production line, the two movements have the same basic architecture, and will no doubt underpin the Audemars Piguet model range in time to come (while its ladies’ watch will probably rely on Vaucher movements). 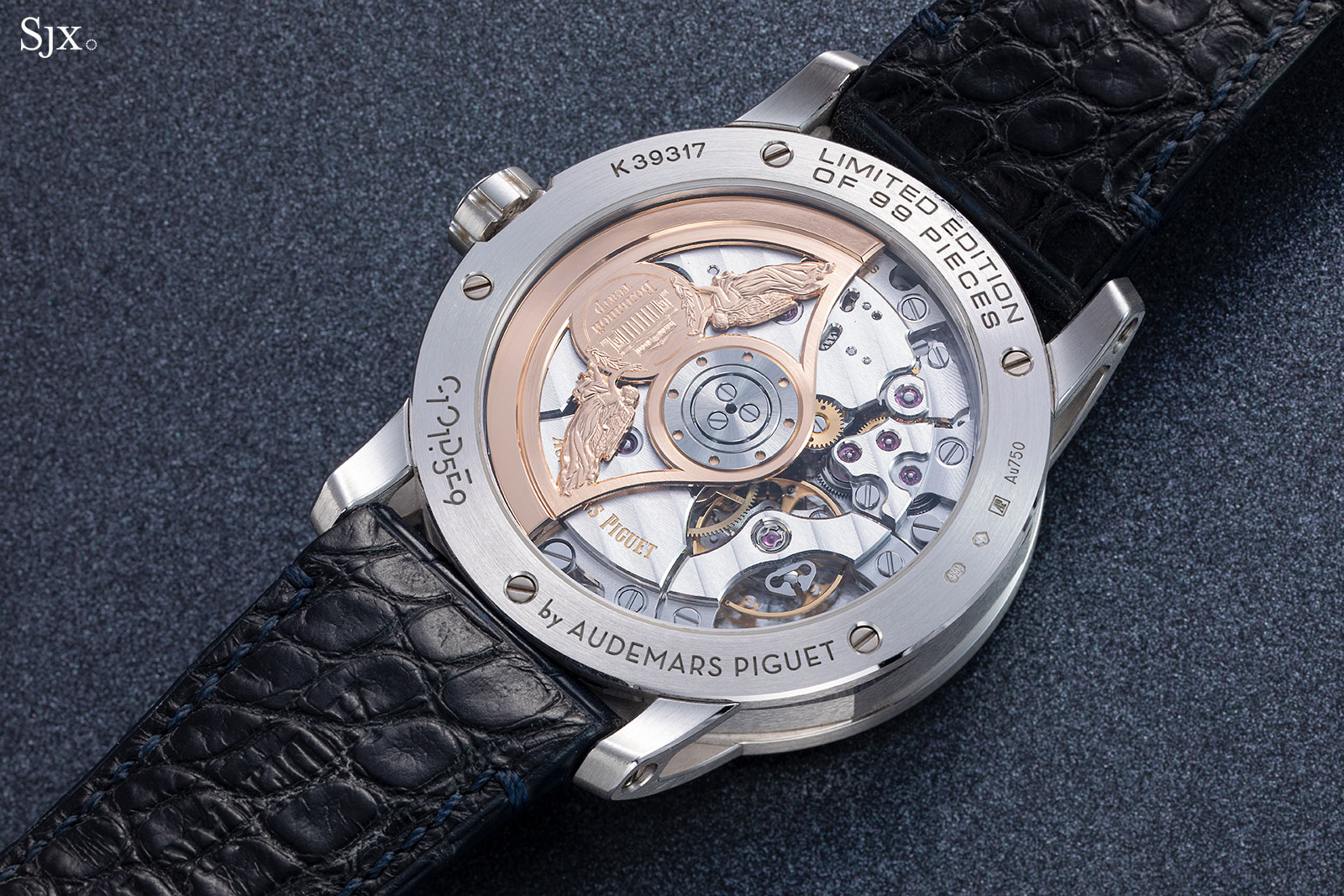 The cal. 4302 with a Bolshoi-emblem rotor

The Bolshoi edition is powered by the cal. 4302, a large movement with a sophisticated construction that was no doubt conceived to be a high-end, workhorse calibre for men’s watches.

Both the scale and elaborate construction can be discerned from the details of the movement, which are all typical of a movement designed for stable timekeeping. 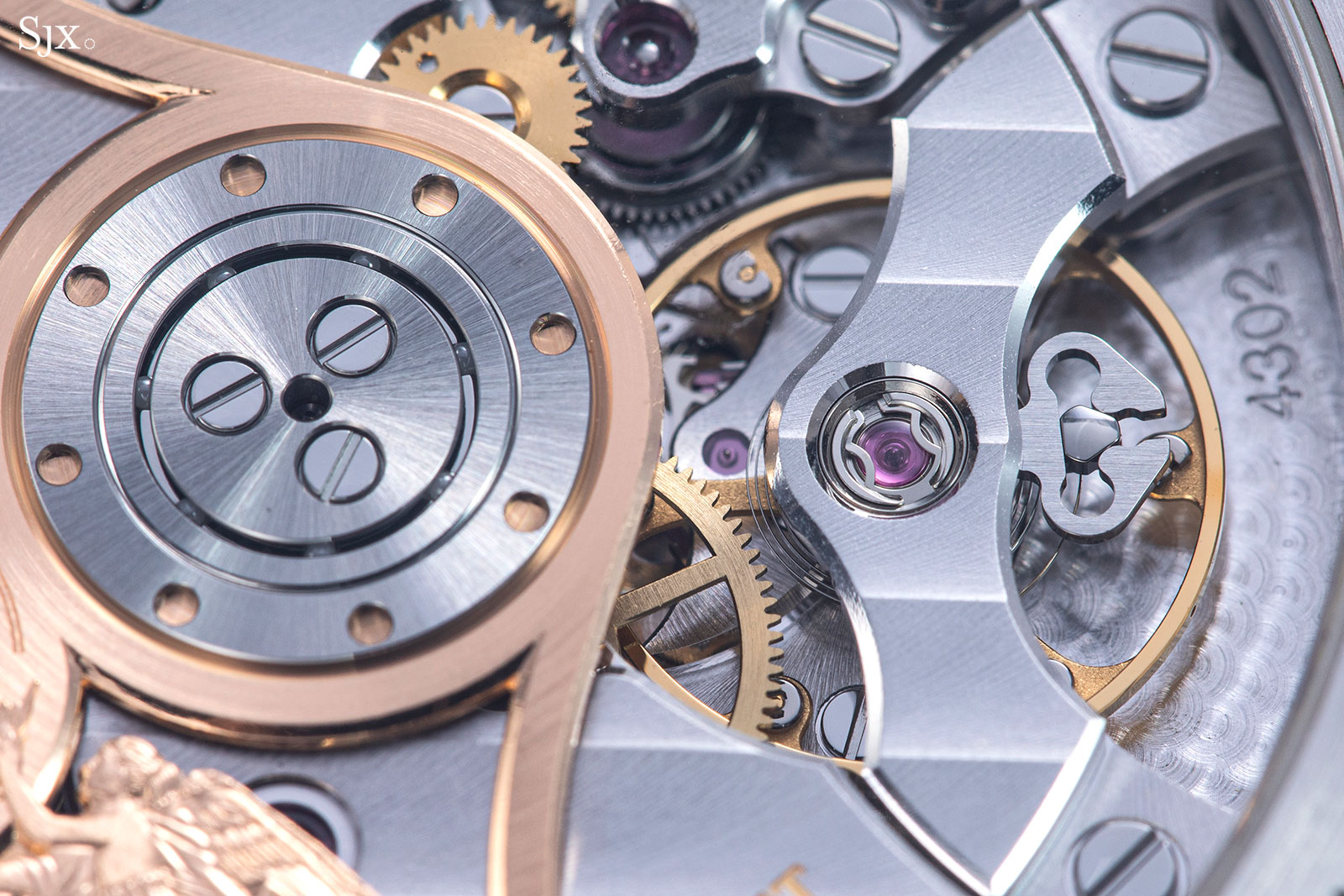 The balance wheel is large and free-sprung, with an unusual pincer-shaped hairspring stud carrier. For stability, the balance is secured by a wide balance bridge, instead of a more conventional balance cock 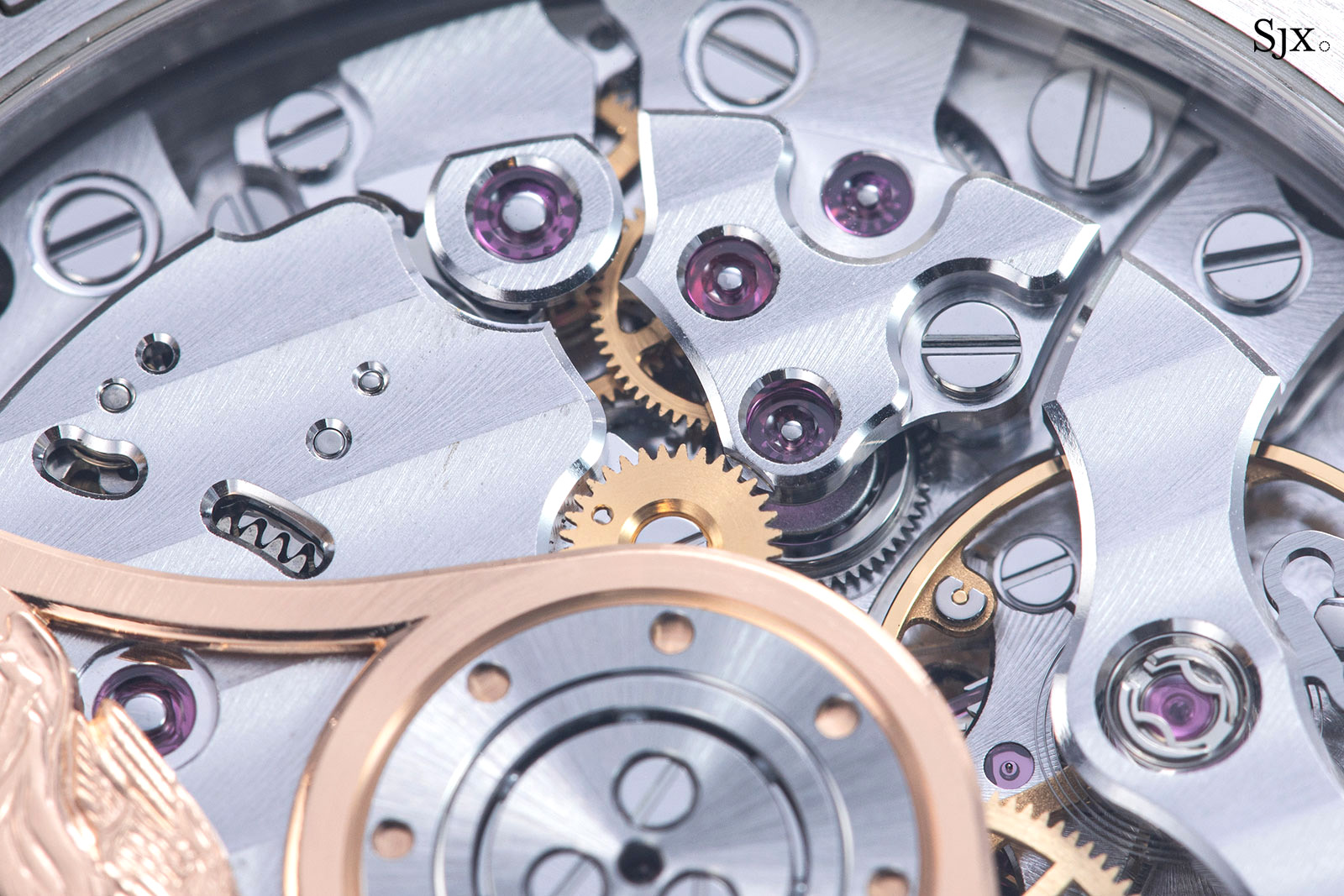 To go with the large balance wheel, the movement has one barrel, but large enough to give it a 70-hour power reserve and wound by a gold rotor via reverser gears 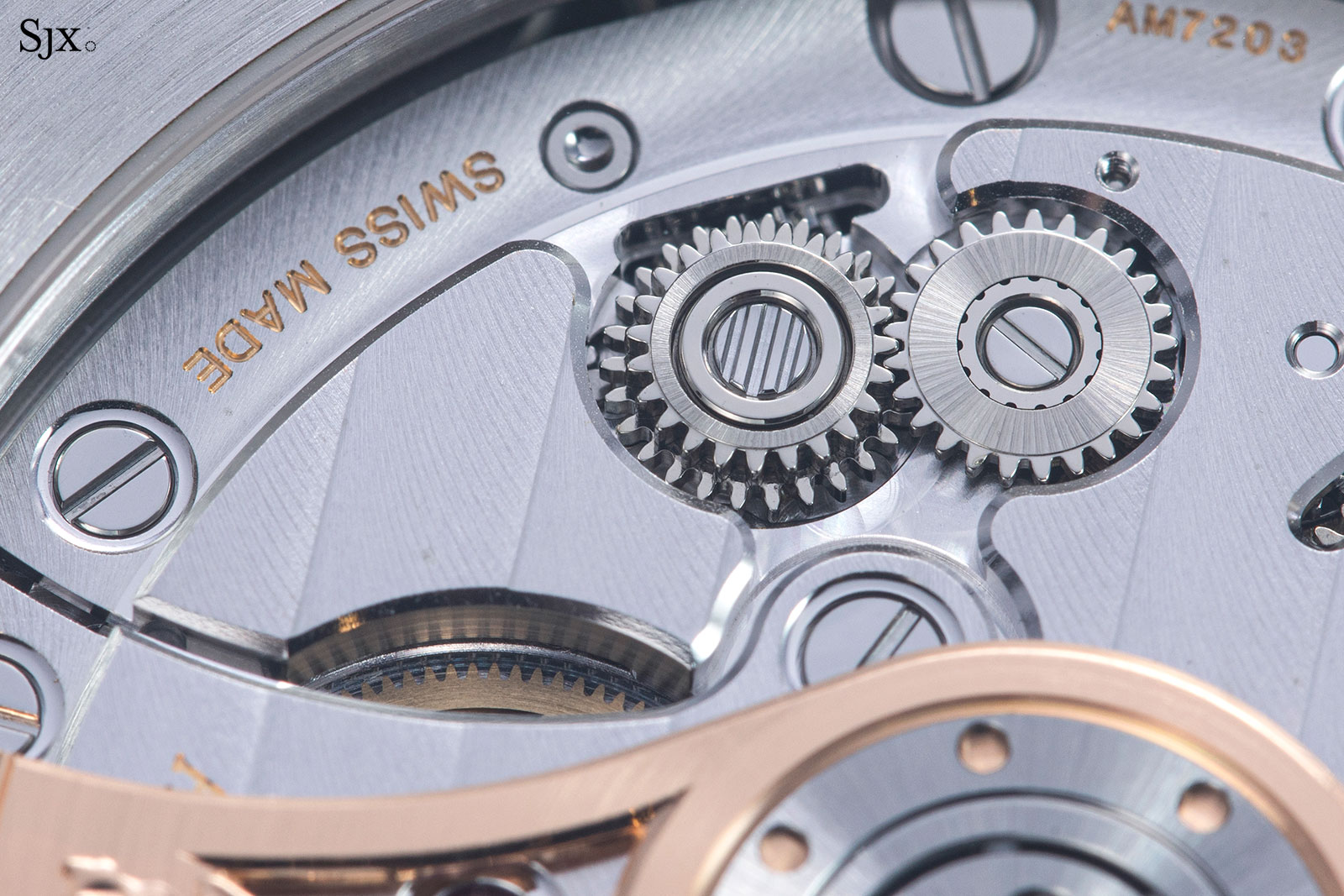 The gears of the keyless works for winding and setting

Visually, the movement is typical of Audemars Piguet. The decoration is clean, sharp, and a mix of machine- and hand-applied finishing.

Another element of the decoration that stands out is the perlage on the base plate. Positioned neatly and evenly, the individual spots is unusually small and fine relative to the size of the movement, which means it takes more time to apply compared to larger spots. The 22k gold rotor is unique to the Bolshoi edition 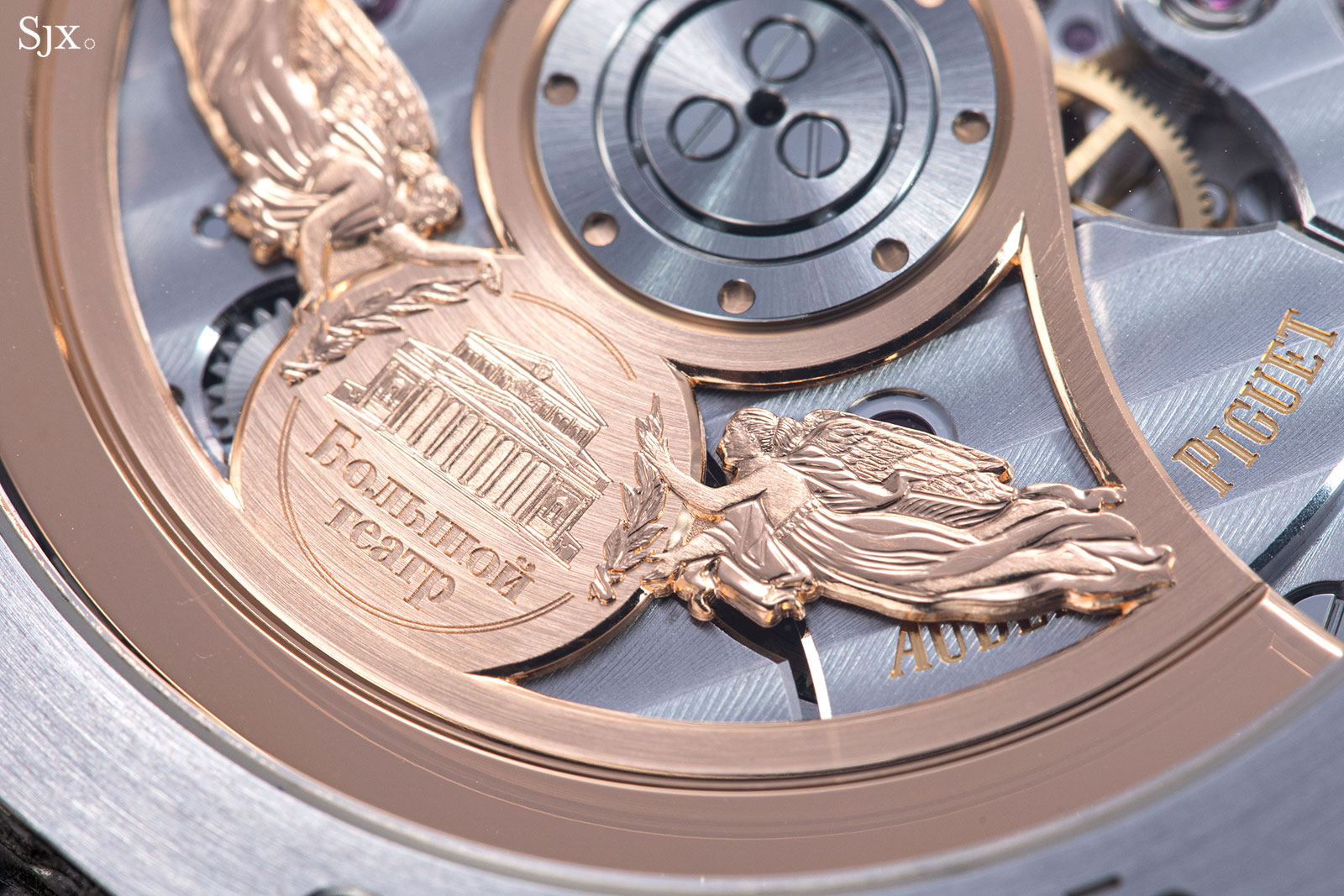 While the standard rotor features coat of arms of the Audemars and Piguet families, the rotor here features the Bolshoi logo with hand-engraved details and hand-finished bevelling 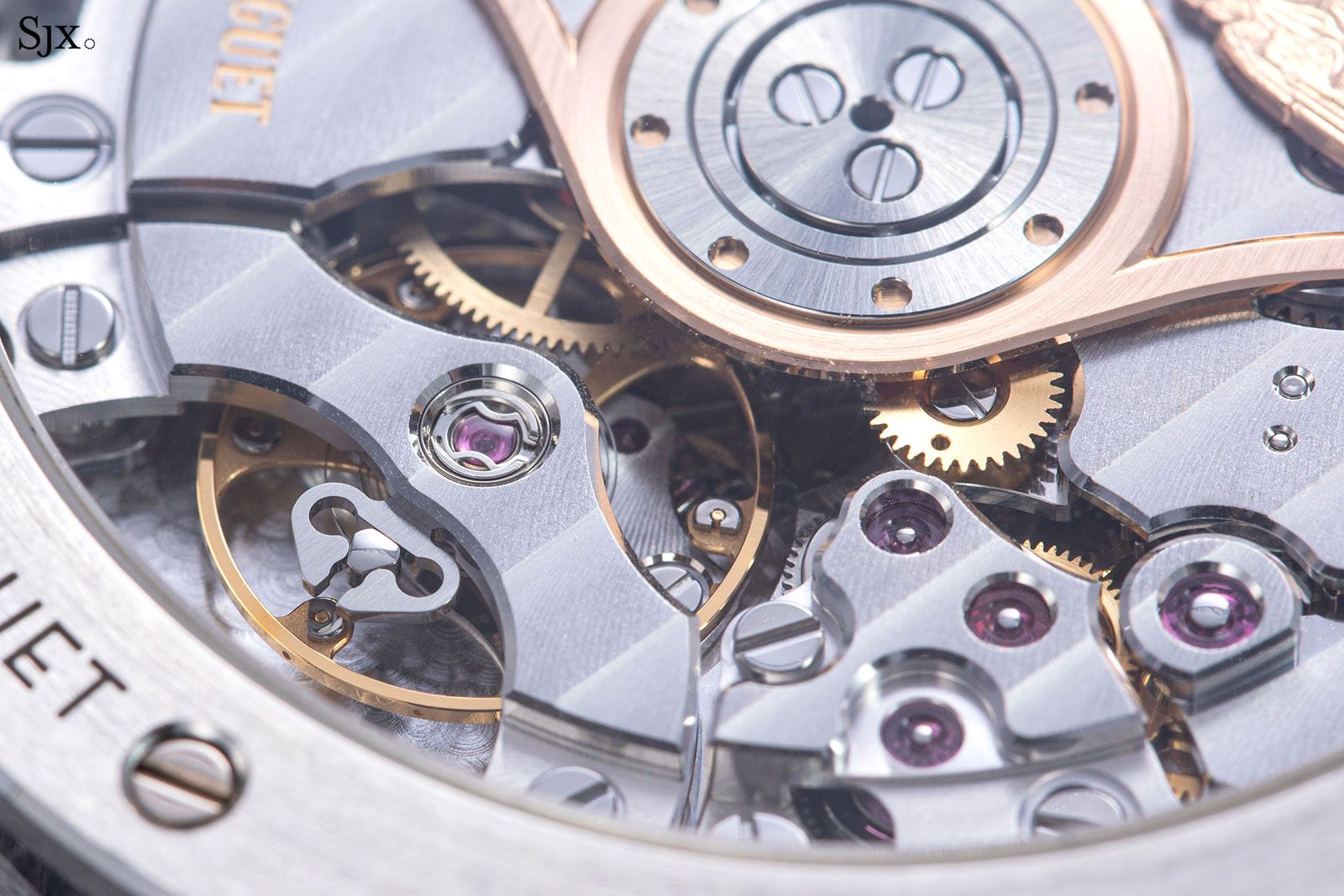 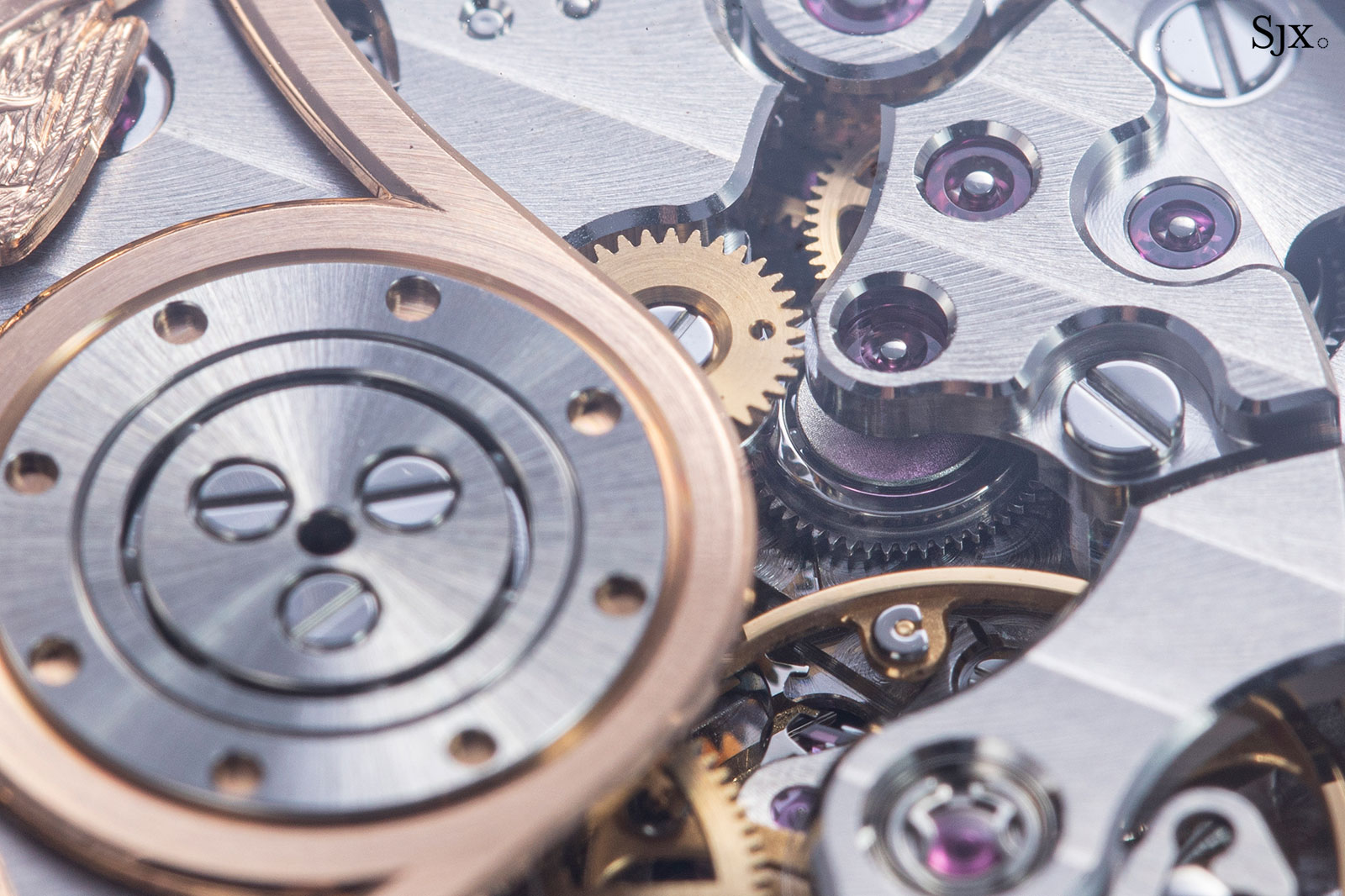 The gears for the winding mechanism

Though cleanly designed, the Bolshoi edition is striking and also more modern than the versions of the Code 11.59 automatic. It is a good-looking watch from all angles, and the dial is beautifully done.

But the Bolshoi edition is extremely expensive for what it is. The extra cost of the enamel dial (and also the hand-engraved rotor) is vast, or US$14,500 to be exact. The Bolshoi edition retails for US$41,300, while the standard version costs US$26,800.

Even though the dial quality is superb, the price is difficult to justify. But word has it that Audemars Piguet will be installing smoked lacquer dials on the Code 11.59 in time to come, which means the same look as the enamel dial for much less money. That will be far easier to justify, and well worth it.