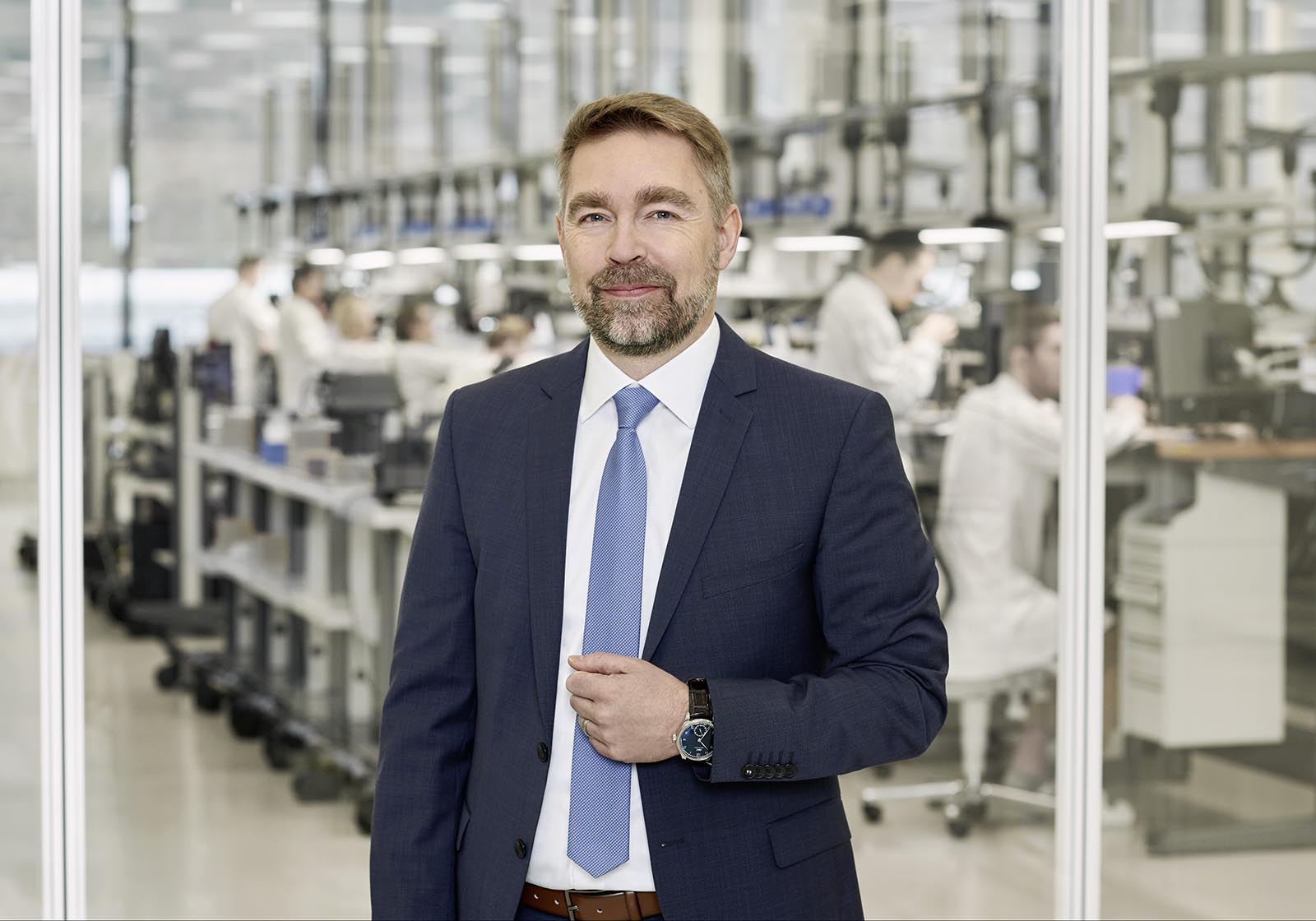 A watchmaker who also trained as an engineer, Stefan Ihnen has been leading IWC’s movement development since 2006, continuing the brand’s long-established tradition of concise and practical movements. This year Mr Ihnen and his team rolled out new movements in a trio of Portugieser models – the Yacht Club Moon and Tide, Tourbillon Retrograde Chronograph, and Monopusher Chronograph – all built according to a philosophy that mixes technical accompaniment with practicality.

Since the 1980s, IWC’s movements have been characterised by a pragmatic approach, making a virtue of constructing the most complex mechanisms in a simple, robust manner. The philosophy gave birth to many of the brand’s hallmark complications such as the Da Vinci perpetual calendar and the Il Destriero Scafusia, both complicated but powered by the Valjoux 7750. 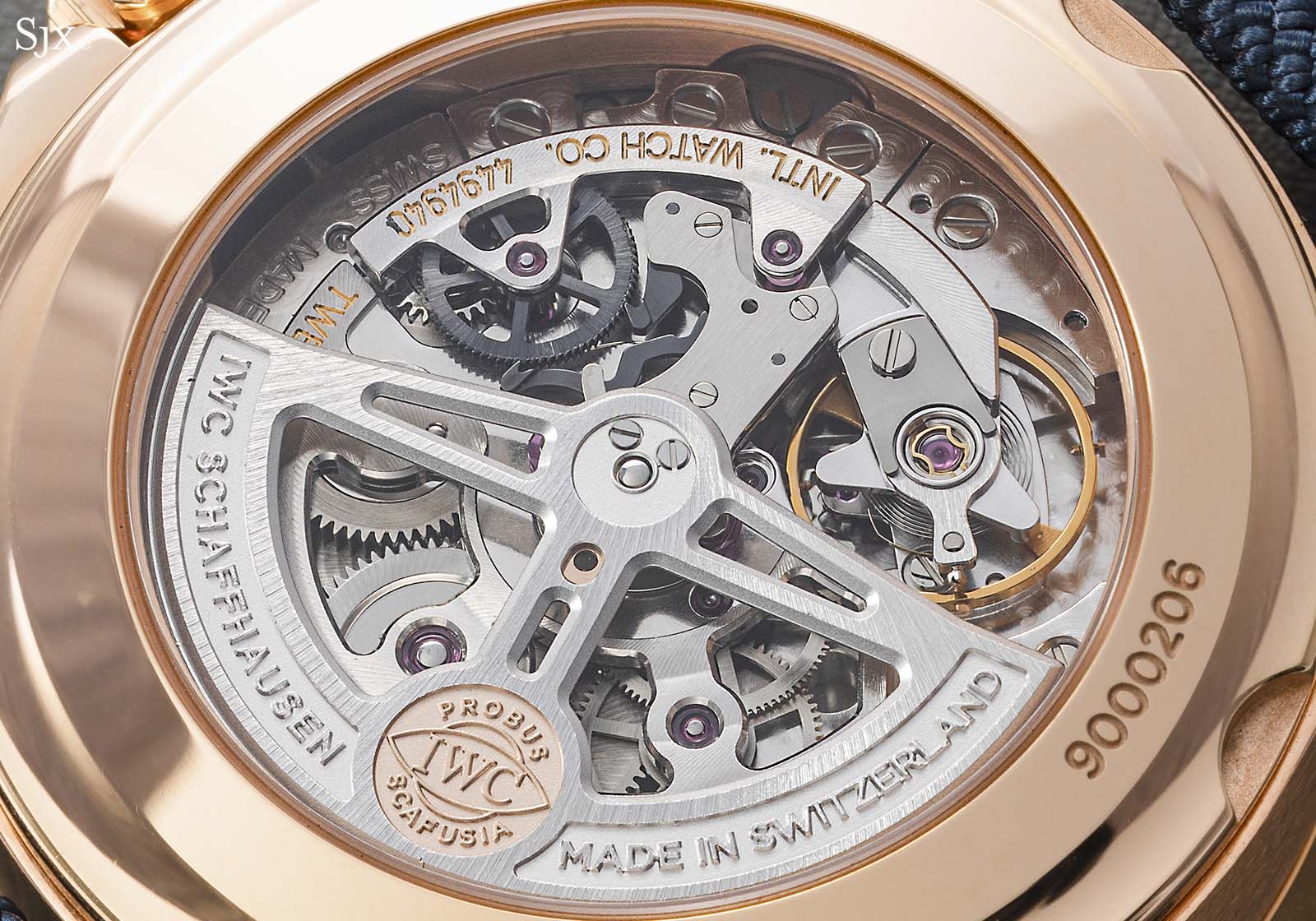 The cal. 82835 in the new Portugieser Yacht Club Moon & Tide

And in the year 2000, the brand debuted the cal. 5000, an extra-large automatic movement with a seven-day power reserve and Pellaton winding mechanism, marking the start IWC’s modern generation of in-house movements. Twenty years on, IWC boasts an extensive range of proprietary calibres of 10 movement families. Beyond the solid and impressive foundations, the movements sometimes incorporate esoteric complications, ranging from a constant force tourbillon, and the a newly-introduced tide complication.

Mr Ihnen is the perfect person to shed light on these movements. Formally the Associate Director of Technics, Mr Ihnen joined the brand in 2002 as a development engineer. In a phone interview, Mr Ihnen offers some insights on the trio of interesting and complicated movements unveiled at Watches & Wonders 2020, illustrating IWC’s unique approach to movement construction – and also offering some hints as to the future use of silicon escapement parts.

Can you tell us about the decision to introduce a hand-wound, mono-pusher chronograph, given many of your movements tend to focus on more practical and modern solutions?

You’re absolutely right – a mono-pusher is a very historic complication.

We already have the calibre 69000 and 89000 – two automatic chronographs which are more suited to our Pilot’s and Portugieser chronographs. But we are a chronograph brand so we thought it will be good to also have a hand-wound monopusher movement.

But instead of developing it with a very historic construction, we did a modern one, with an eight-day power reserve, modern escapement of 4 Hz, 60-minute counter, so the movement fits what IWC stands for. 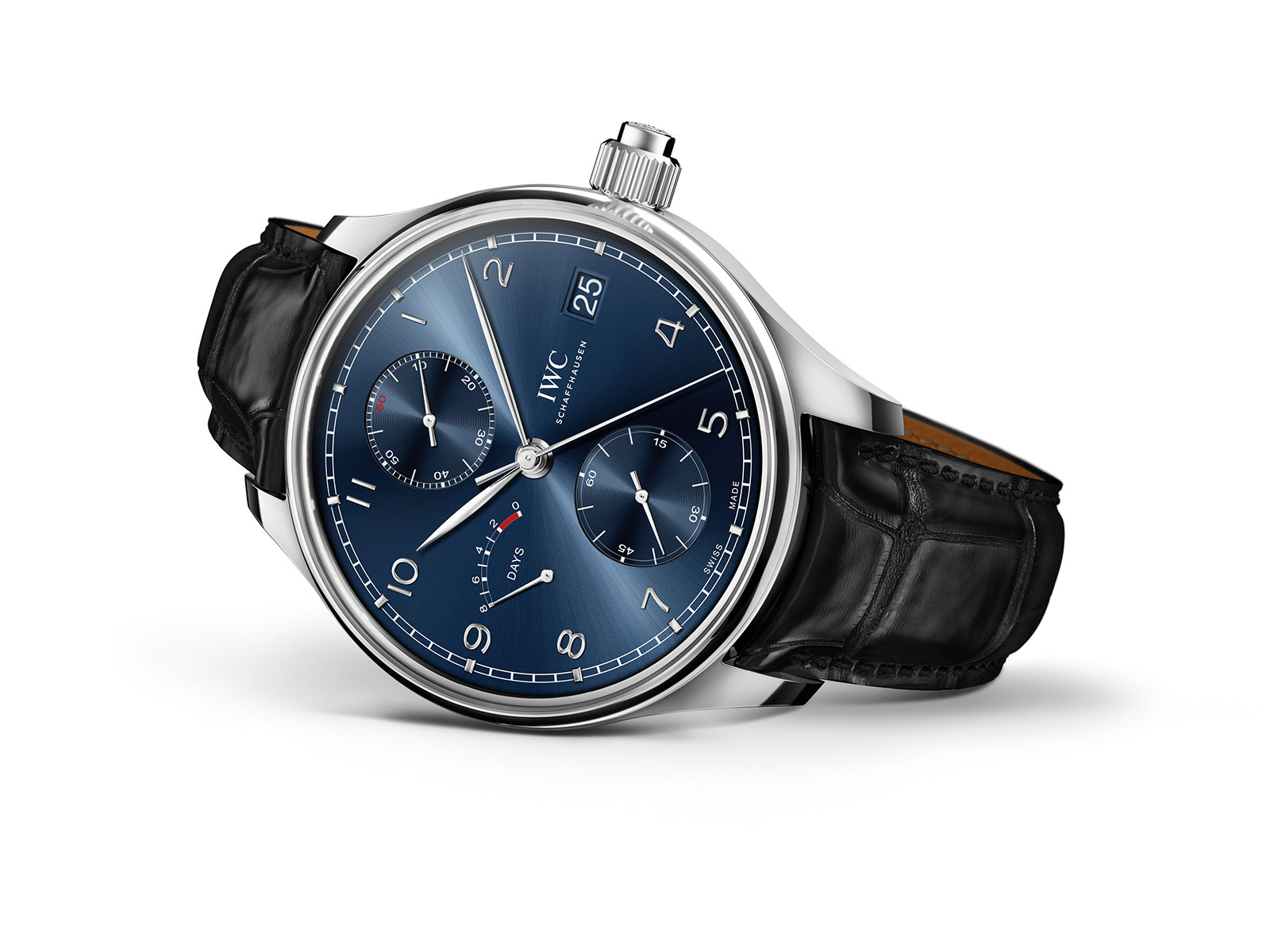 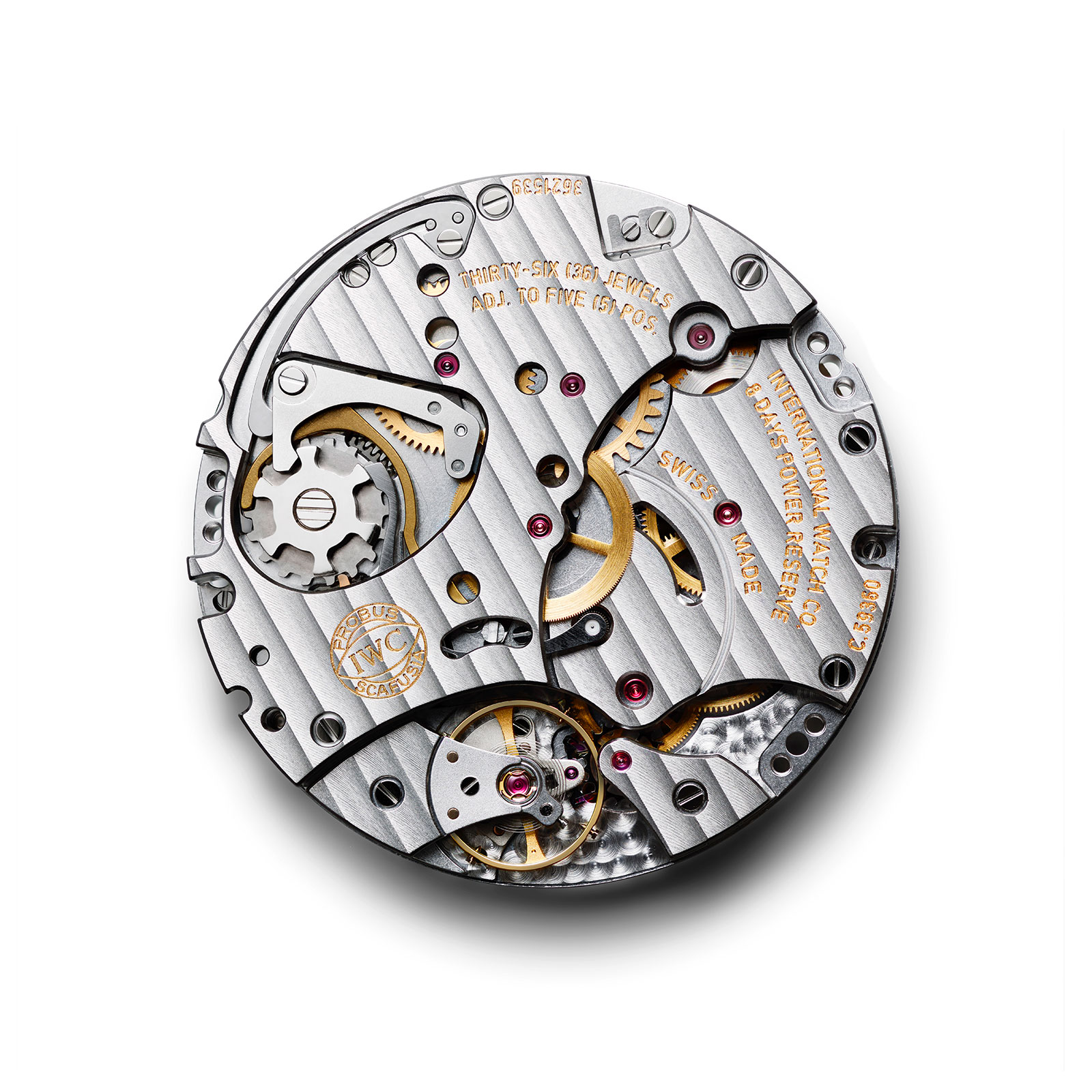 The cal. 59360 with a compact chronograph mechanism

In the original version of the movement introduced in 2015, the intermediate minute-counter wheel was a skeletonised, LIGA fabrication. Why was it replaced by a regular wheel?

We used a LIGA skeletonised wheel in the prototype but eventually we changed it to a nickel wheel, which is more robust. During the development, we saw that the wheel is quite heavy and the mono-pusher itself has quite long hands so we tried to reduce its weight with this special shape, but it went on to the market with a nickel execution. 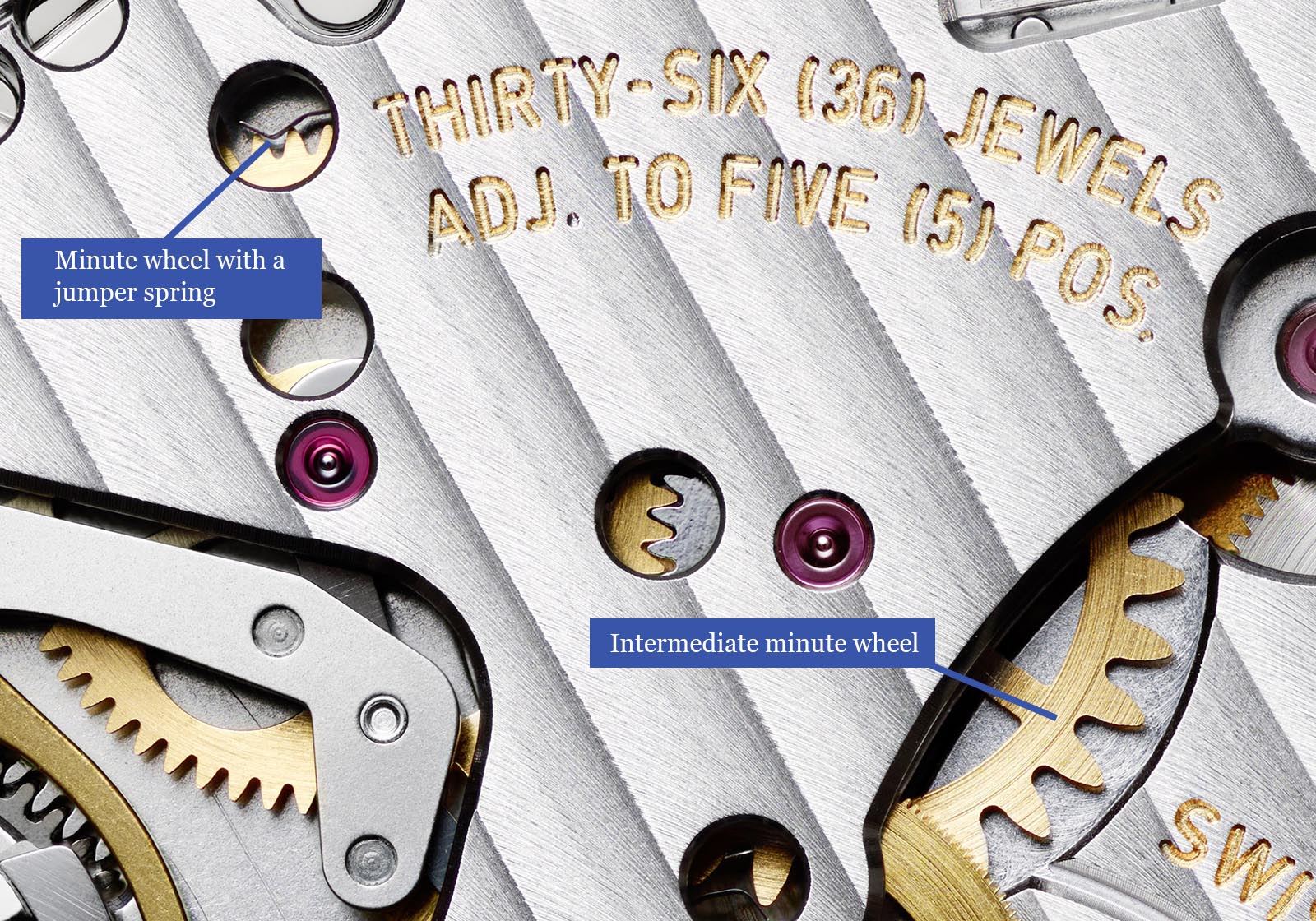 You have also used a LIGA-skeletonised escapement in movements like the cal. 69355 in the new Portugieser Chronograph. Are LIGA-fabricated components produced in-house [by Valfleurier]?

No, we are working together with different partners such as Mimotec to produce these LIGA components. There are also activities at the group level of Richemont that we are a part of.

What changes have you made to the monopusher movement since 2015?

We made some small optimisations to improve robustness. For instance, we have longer pins for the oscillating pinion, and a spring in a different material – just small modifications. The rest is really the same mono-pusher we introduced in the Portofino.

The movement has two pins on the reset hammer. Is it to stabilise the rocking hammer at the tip of the lever?

You’re absolutely correct but usually we don’t see these pins because they are on the underside. They block the hammer from turning around backwards, but gives the hammer the freedom of self-alignment upon contact with the heart cam when it is performing the zero reset. 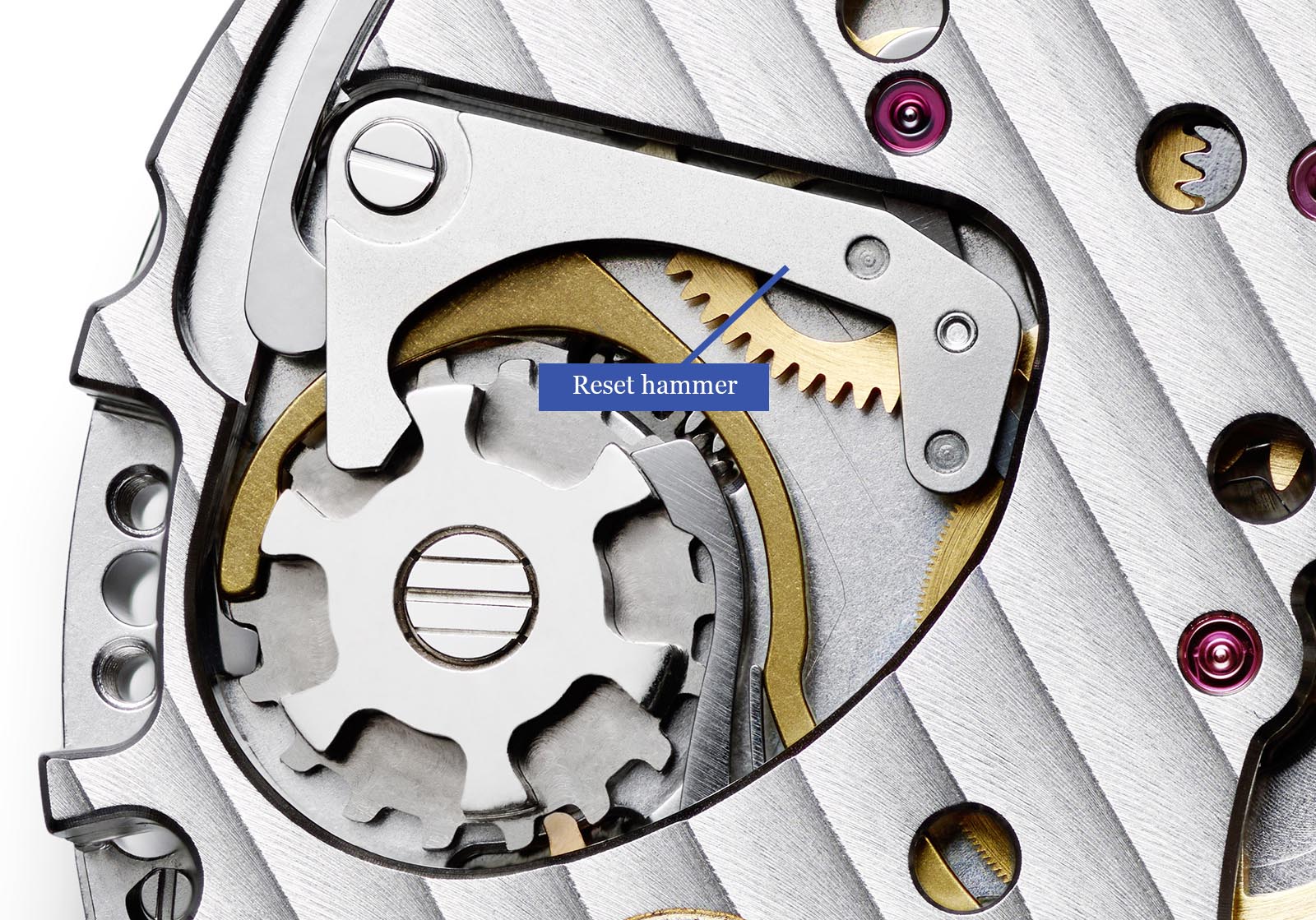 You presented a new complication in the Portugieser Moon and Tide this year. Can you tell us why you decided on such a niche complication?

You’re right, it’s niche but it is a complication that fits very well in our Portugieser line because the tide indicator is about sailing and navigation. And we could also very nicely combine our signature double moon phase with the Neap and Spring tides indicator, so for us it was quite interesting to have such a talking piece in our Portugieser collection. 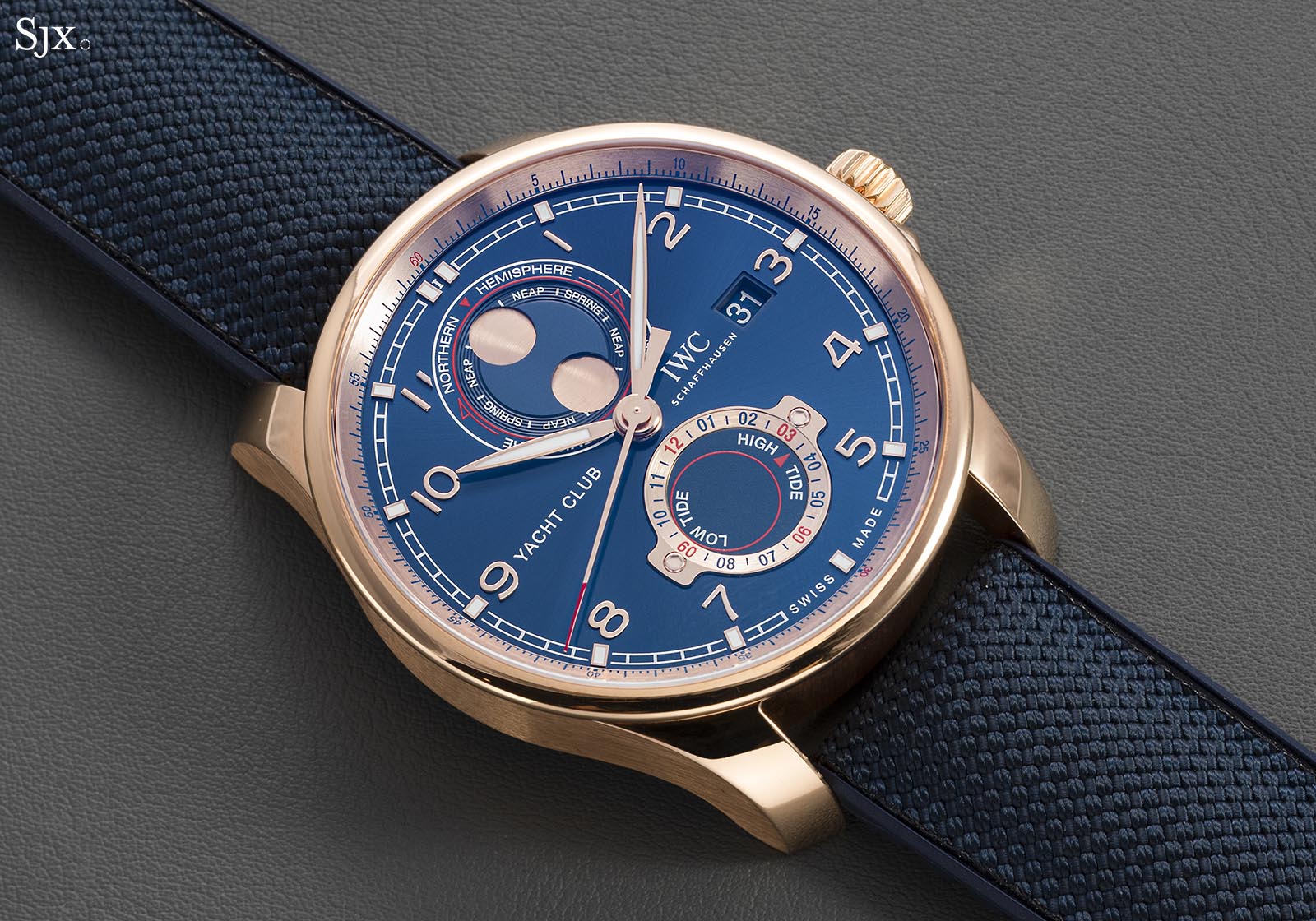 How is the tide display adjusted?

The tide indicator is independent from the time display so the tide indicator can be set counter-clockwise in the first crown position. And you will need port information for the tide – location of your sailboat and harbour – and you’ll also need to know the tide of the exact location, and then you can set your tide. Then the tide display will be correct going forward. But it is only for this particular position and this particular harbour.

So, the hour hand is geared to the sub dial disc?

Yes. In fact, for convenience, you can reference the next high tide during setting. For example, if we know the next high tide is 4 pm, first set the time to 4 pm, then set the high tide to 4 pm as well. The setting is then complete – after that, you can adjust back to the current time and the tide mechanism will still be correctly calibrated.

But to know that a high tide is coming at 4 pm, you will need a schedule and calendar for the position you are at. Usually, it is fixed on a harbour or port which can be referenced. This allows us to set the tide complication without explicitly knowing the position of the moon. 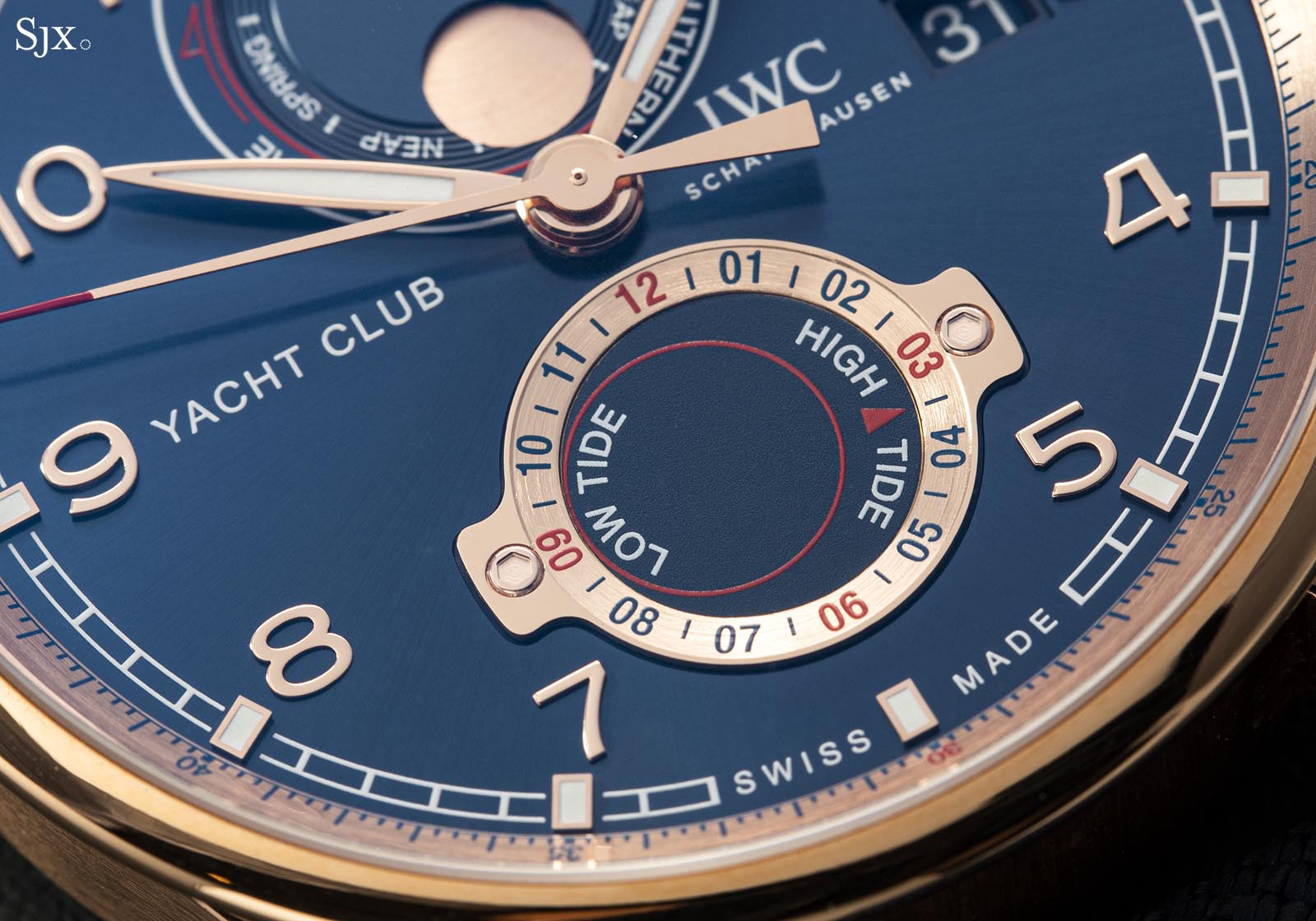 A 12-hour scale with a rotating disc that indicates the high and low tides. A time of 10.10 on this watch indicates on the tide sub-dial that it is low tide

One of the more unusual aspects of the Tourbillon Retrograde Chronograph is the flying tourbillon. It has a more elaborate hacking mechanism compared to other brands such as Lange and Montblanc. Is this solution more precise?

There are only a few brands with this mechanism, and we have all patented our solutions. Our solution is quite good because with the two arms, we ensure that one of them is touching the balance wheel directly, because we don’t want one arm to stop the cage alone. Of course, the tourbillon will also stop when one arm touches only the cage, but then the balance wheel would still move, and that is not good as it could cause some damage and problems with the lubrication, or even push it to the wrong position.

So that’s the reason why we have two arms. Both of them can reach the balance wheel, or if one arm touches the cage and the other the balance wheel, it will also work. From my perspective, it is very precise, robust and independent. We set it in place and it works as compared to other mechanisms that work with long springs, which can move and have to be adjusted very precisely by the watchmaker. 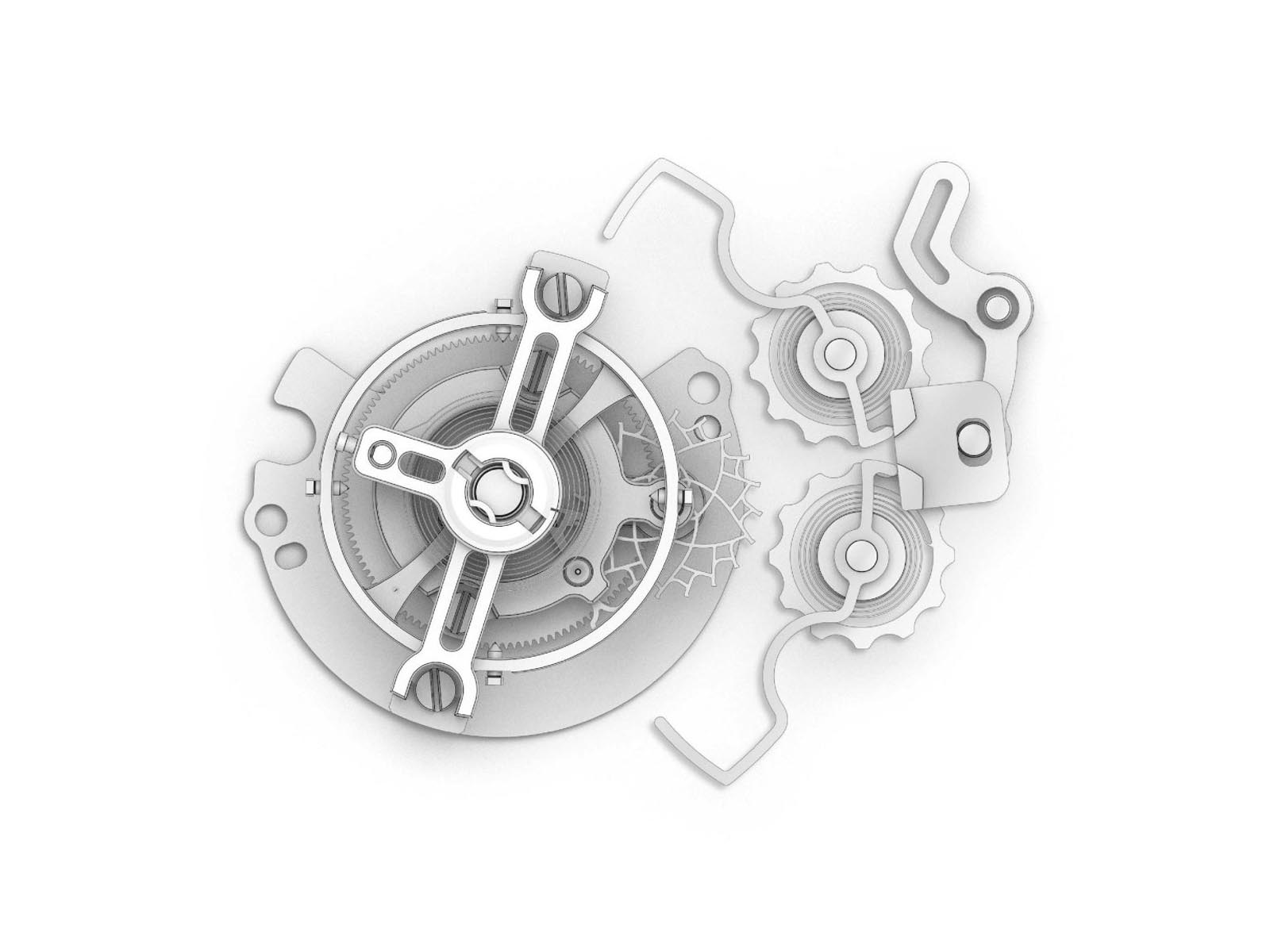 The movement also has a diamond-coated silicon escapement. What are your thoughts on this material so far? And who made the escapement parts?

I can’t tell you who made it, but it was quite a long development and is exclusive to us. We still have a development contract with this supplier, and I think we will keep this for the next year or so. It has worked very well. We used it in the tourbillon because it has a lot of advantages especially with weight savings, temperature sensitivity, anti-magnetism, friction. Last year, IWC introduced the 32000-caliber family, which incorporated silicon escapements for the first time in entry-level movements. How far do you intend to take the use of silicon?

The caliber 32000 was designed from the ground up to incorporate a silicon escapement. To implement silicon parts across existing calibres is not so easy because the material has a big influence on the energy balance within the movement. We are still testing these kinds of things, and to be honest, we are being very careful when introducing them in our movements. It has to work 100% because we have to ensure it will never compromise our quality and precision.

A Look at the First Ever Monopusher Chronograph from IWC (Review, Original Photos & Pricing)