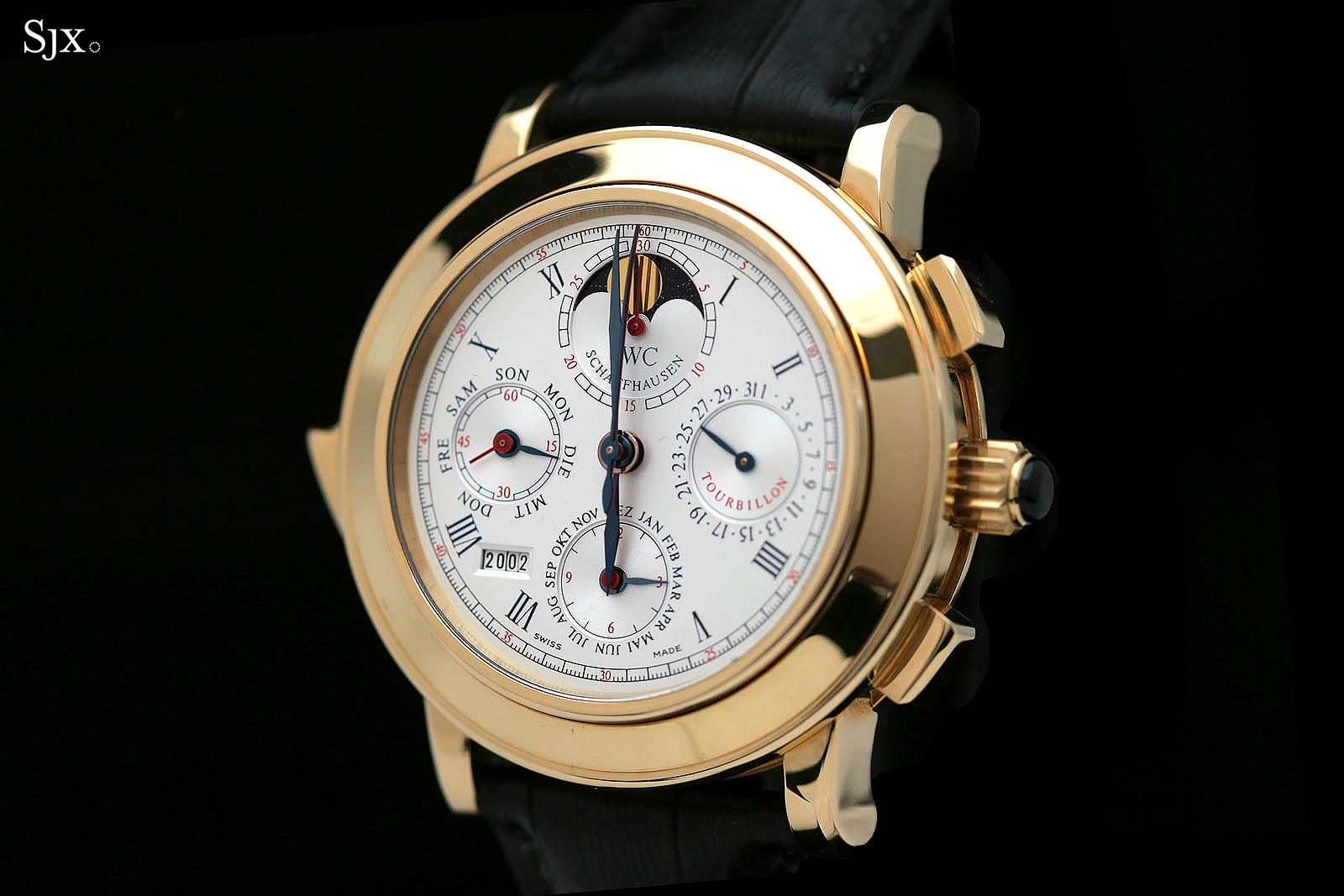 At the time of its launch in 1993, the IWC Il Destriero Scafusia – Latin for “The Warhorse from Schaffhausen” – was touted as the most complicated wristwatch in the world.

But it had competition, being one of several remarkable grand complication watches that emerged at the end of the 1980s and early 1990s, as the Swiss watch industry began its remarkable recovery after emerging battered from the Quartz Crisis. 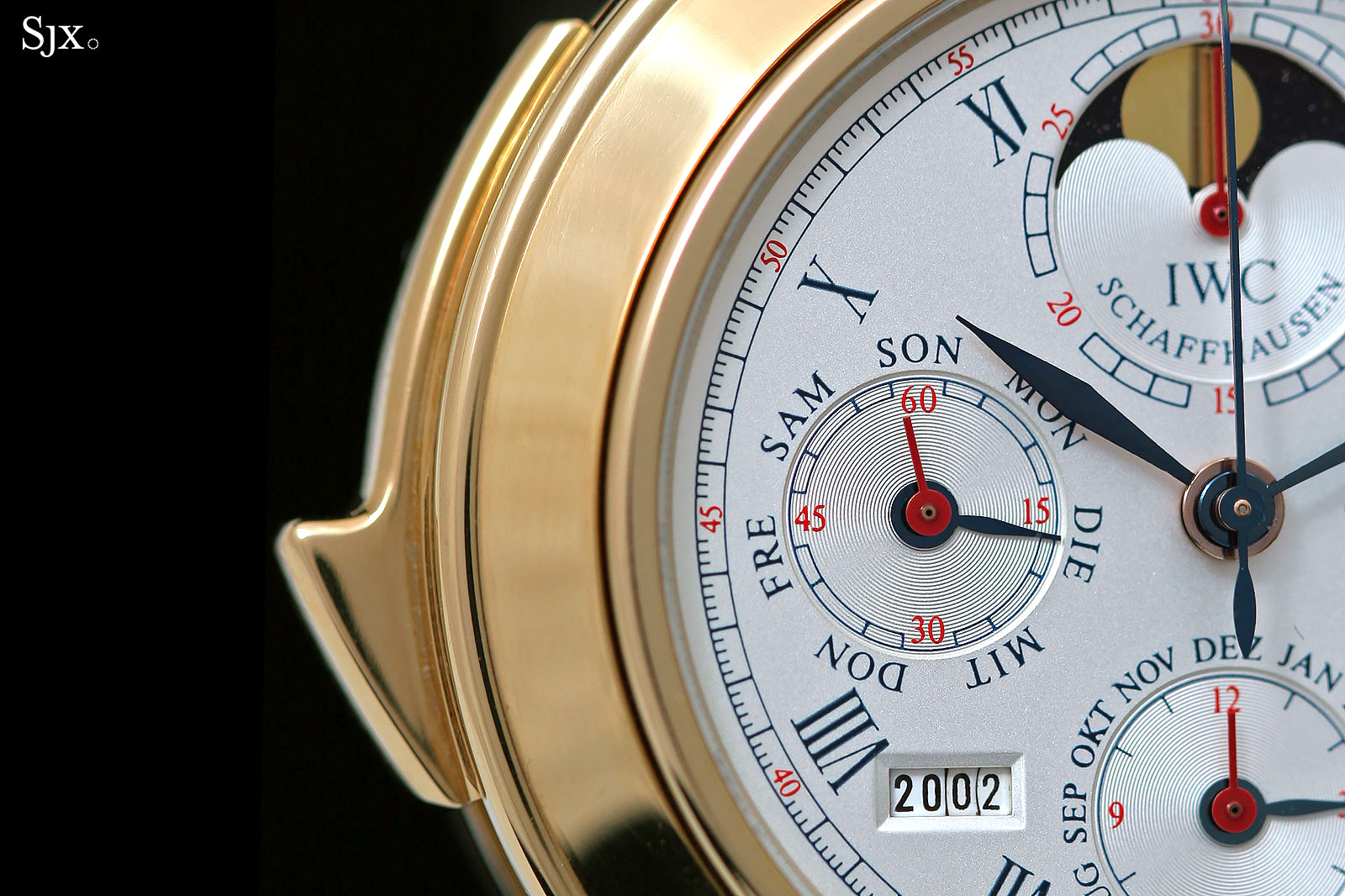 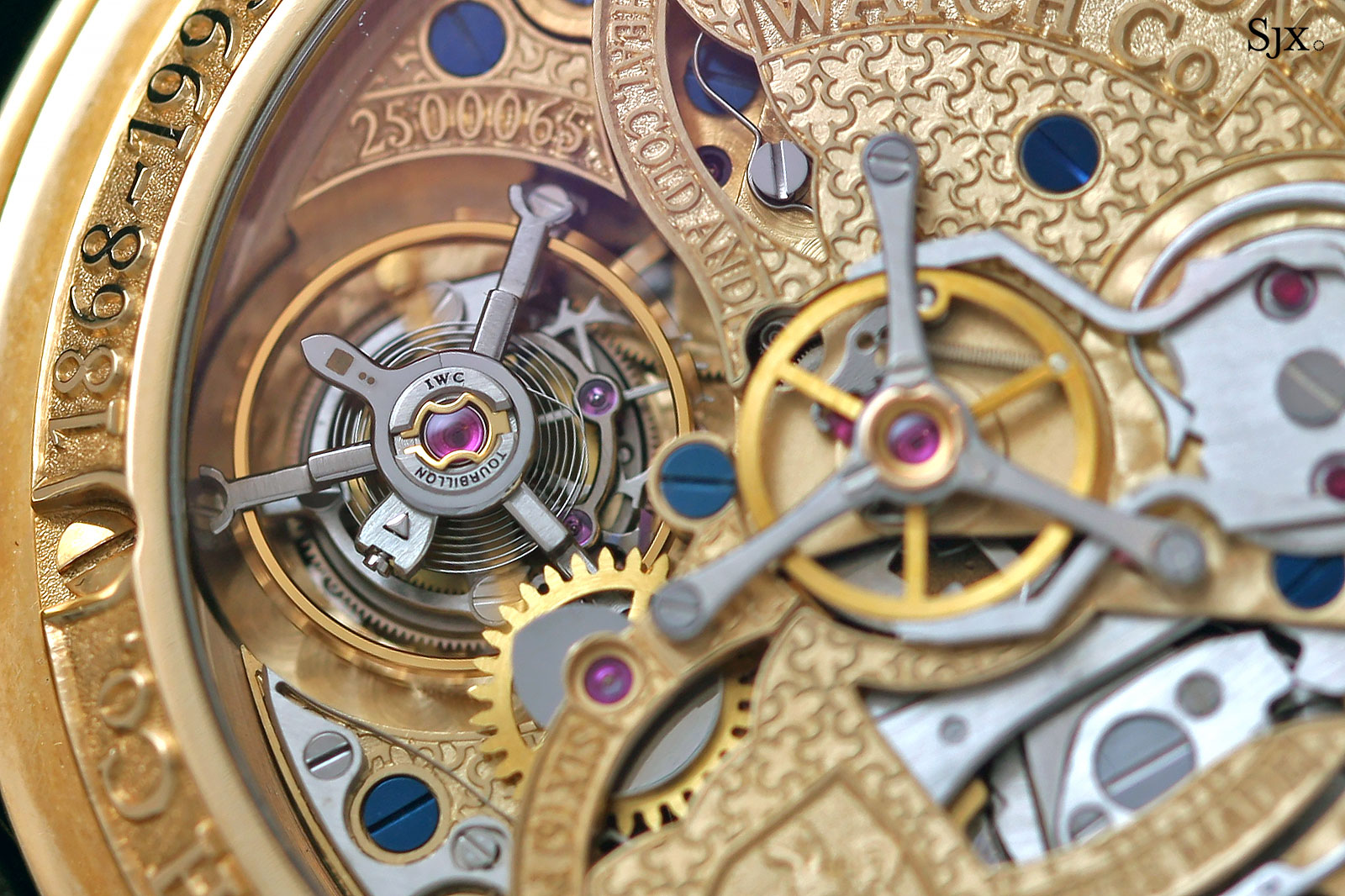 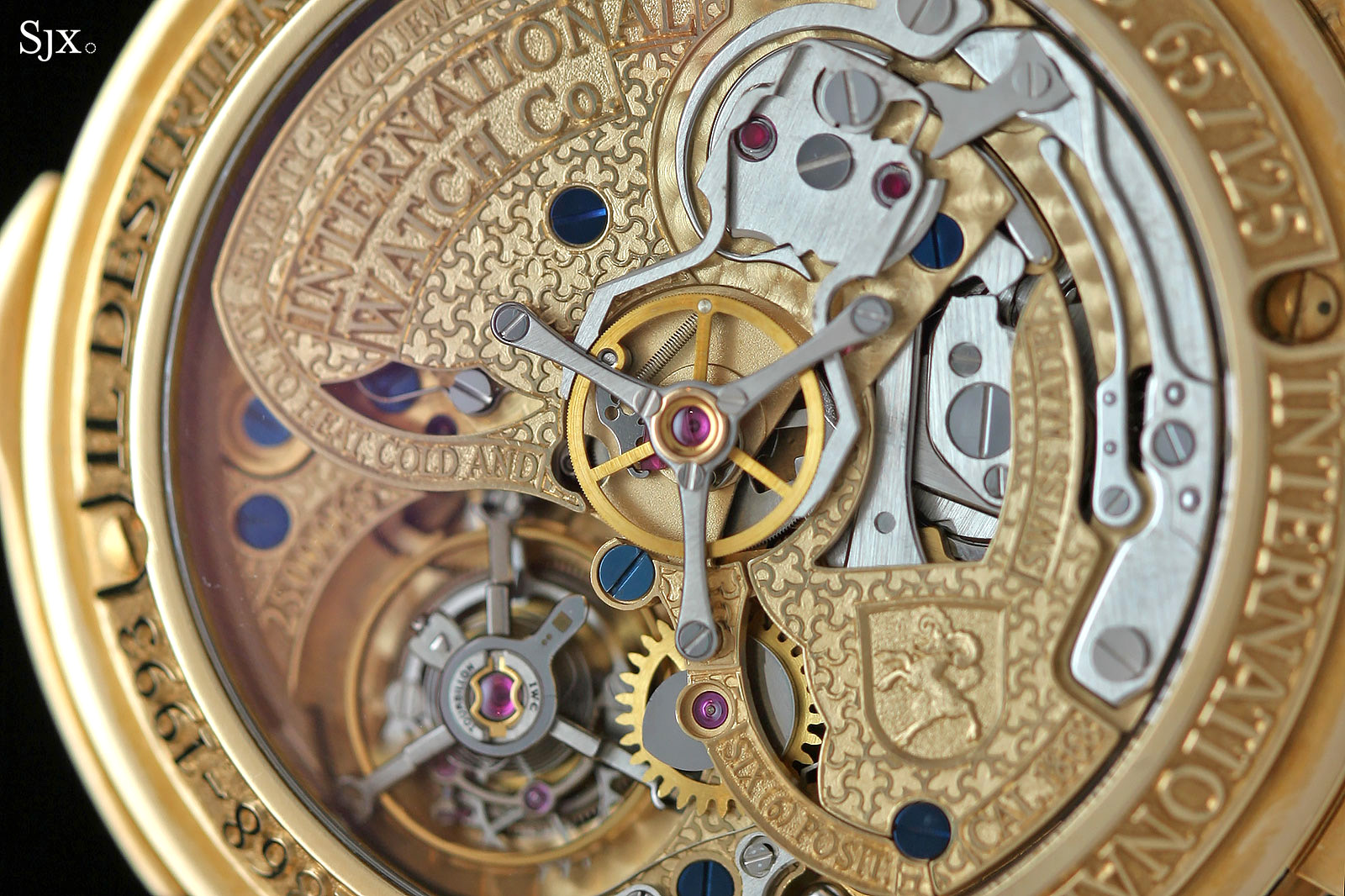 The grand complication race began in began in 1989 when Patek Philippe unveiled the Calibre 89 to mark its 150th anniversary. Boasting 33 complications and barely portable, the massive Calibre 89 was made in a limited edition of four: one in each of the three colours of gold, as well as platinum.

Two years later Blancpain debuted the 1735, an extremely ambitious watch six years in the making and one that never seems to have quite been finished even now – anecdotal evidence suggests the 1735 remains too complex to be reliable, even compared to other grand complications. And then in 1992 Audemars Piguet unveiled the Triple Complication in a distinctive teardrop-lug case, and later upgraded it by adding a split-seconds chronograph complication, and christening it the Jules Audemars Grande Complication. 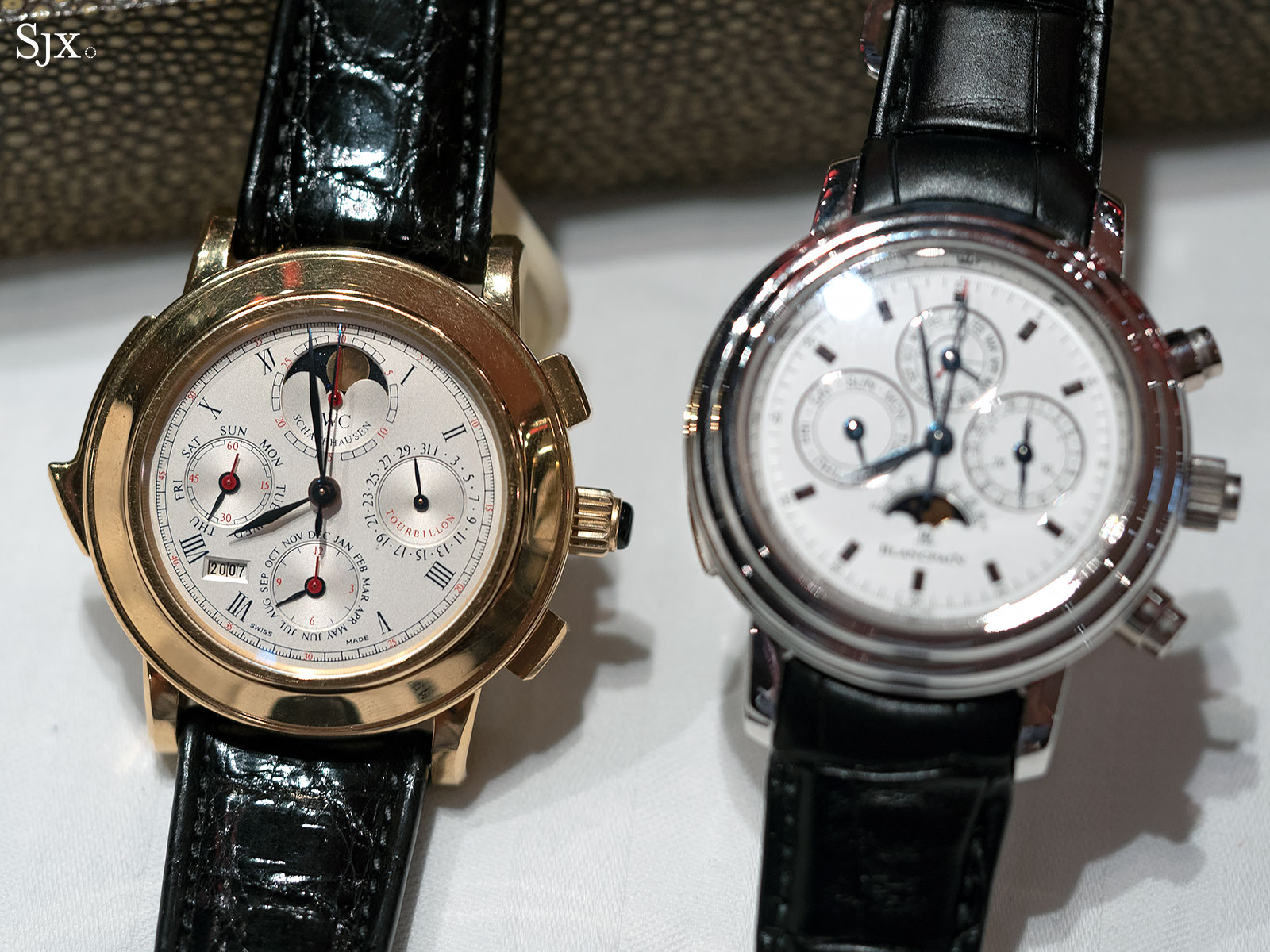 An Il Destriero Scafusia (left) and a Blancpain 1735, captured at Antiquorum in late 2019 when both were offered for sale in the same auction

Around at the same time, Franck Muller, then still a pioneer independent watchmaker, made it an annual ritual to launch a première mondiale, or “world premiere”. Each annual edition was a multi-complication wristwatch that was reputedly the first time the particular combination of complications had been put together. These “world premieres” allowed Mr Muller to bestow upon himself the title “Master of Complications”.

The last of the era’s grand complications was the magnificent Il Destriero Scafusia, presented in 1993 for the 125th anniversary of International Watch Co.

The most complicated watch ever made by IWC – it arguably retains the title today, depending on how complications are counted – the Destriero Scafusia was powered by the hand-wound cal. 18680, which combined a rattrapante chronograph, flying tourbillon, perpetual calendar with four-digit year display, and minute repeater. 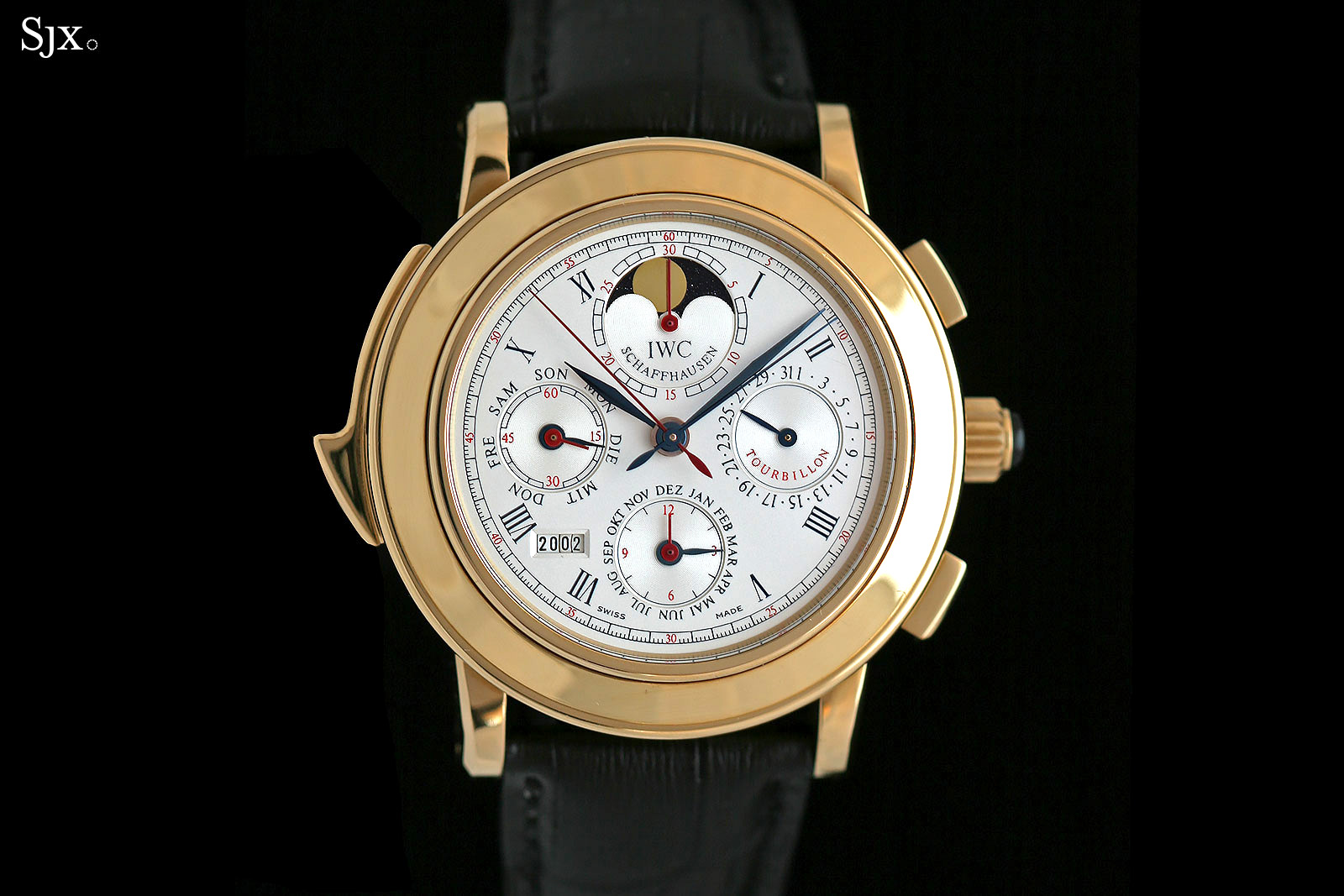 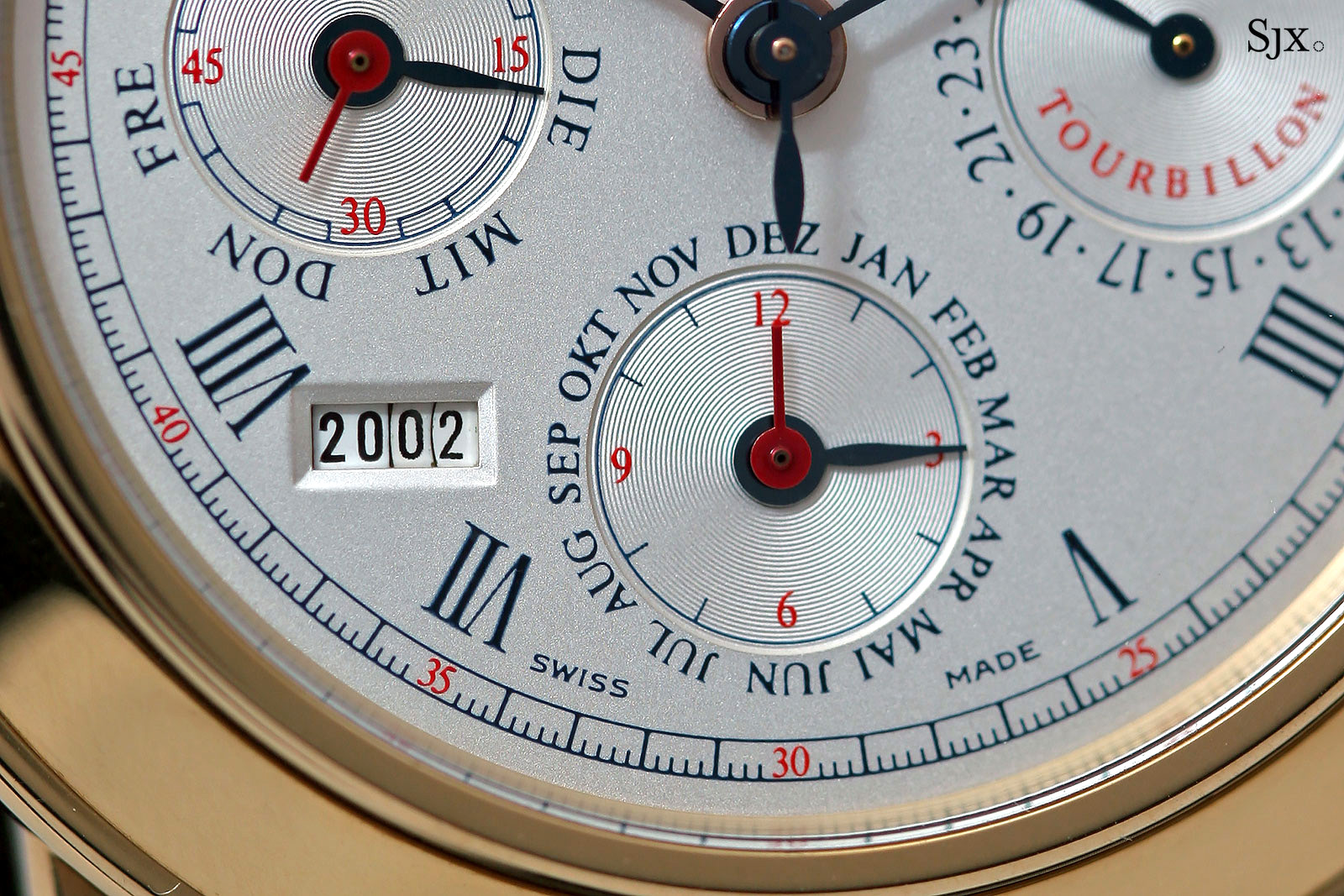 The cal. 18680 is all the more incredible because it is built using the basic architecture of the ETA Valjoux 7750, using elements of the gear train and chronograph mechanism of the 7750. But the humble underpinnings of the movement are barely discernible.

Gilded and finished in a striking relief motif, the three-quarter plate leaves space for the proprietary flying tourbillon with a titanium cage that was designed by Richard Habring. And over the bridges is the patented, simplified split-seconds mechanism that was also an invention of Mr Habring. 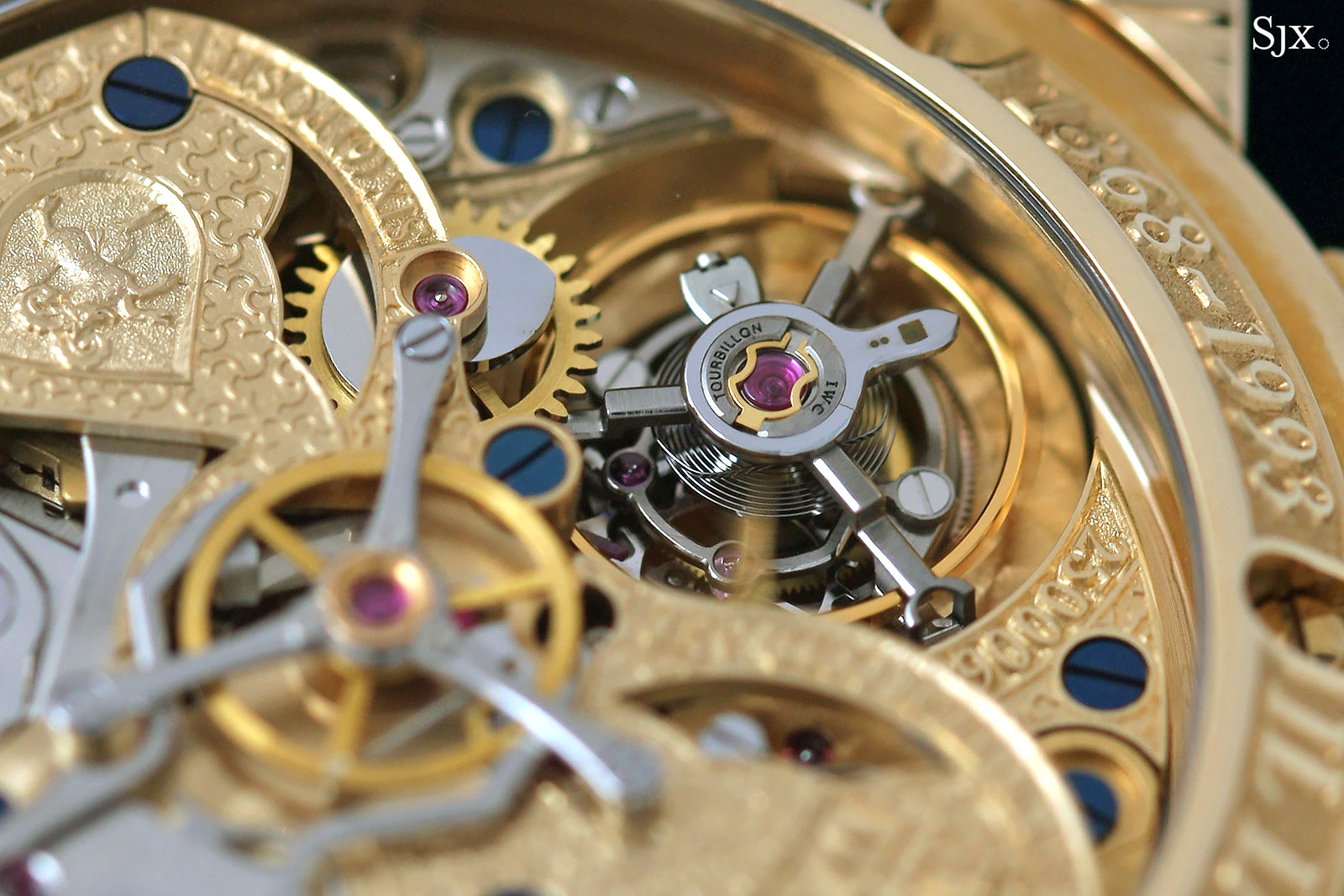 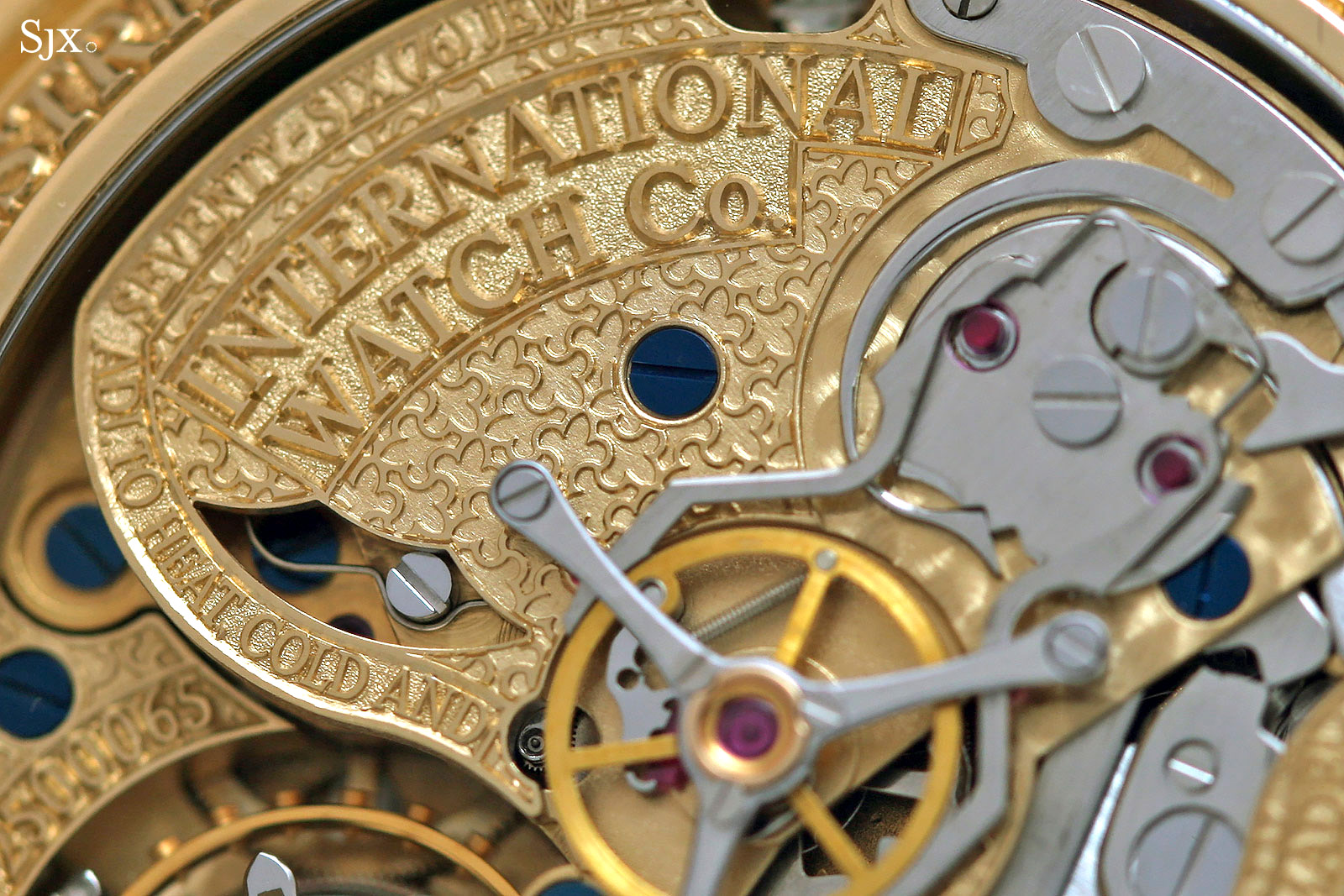 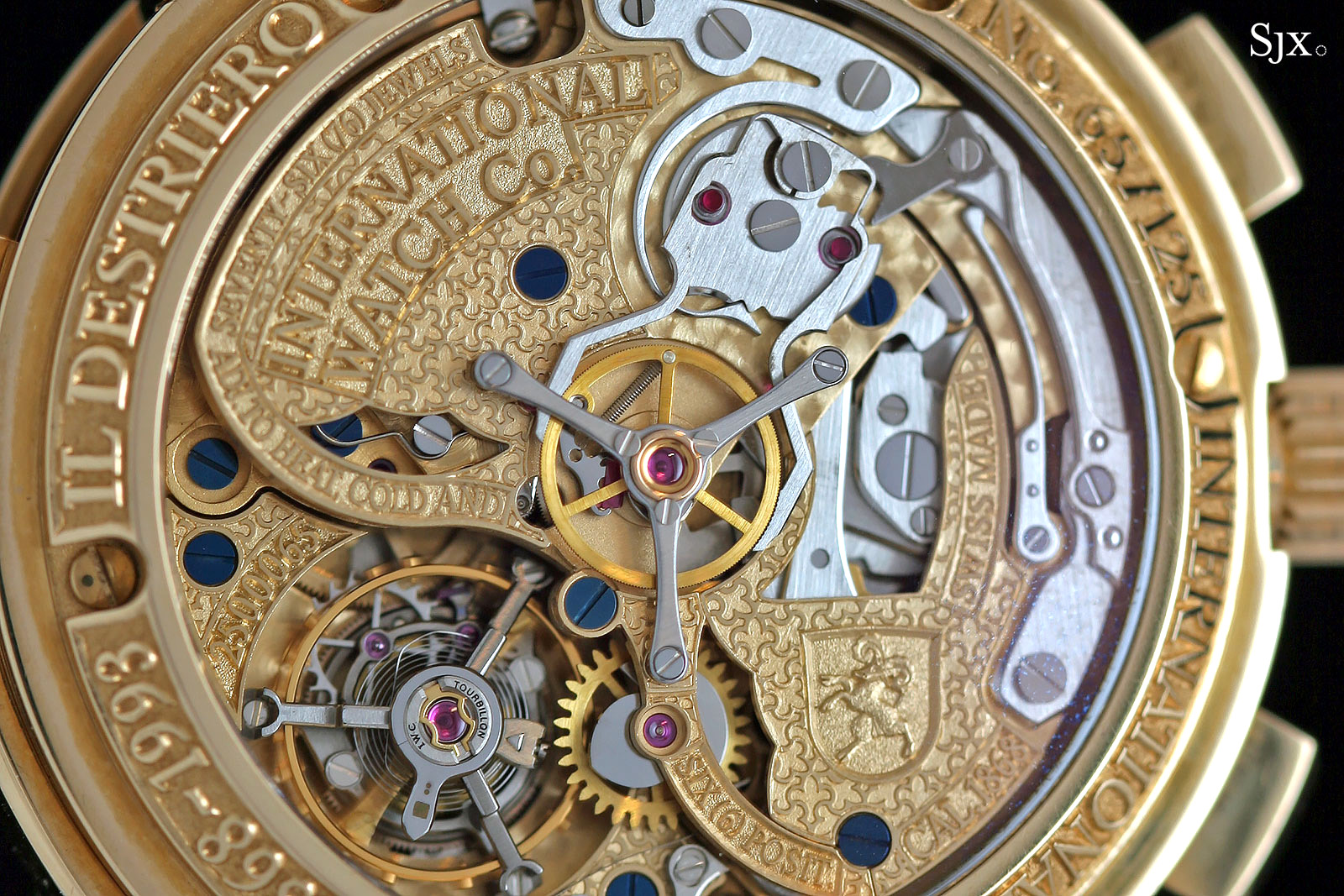 The case back also features unusual relief text, and is believed to have inspired the same style of back on the later A. Lange & Söhne Double Split

Yet the Destriero Scafusia is an exceptionally impressive watch, managing to be both highly complex, yet practical in its approach to innovation. All the complications within were conceived with the goal of making traditional mechanisms simpler and more robust, and ironically all put into an ultra-complicated watch. The solid engineering of the Destriero Scafusia is illustrated by the continued reliability of the examples that emerge on the secondary market now; they still work well. 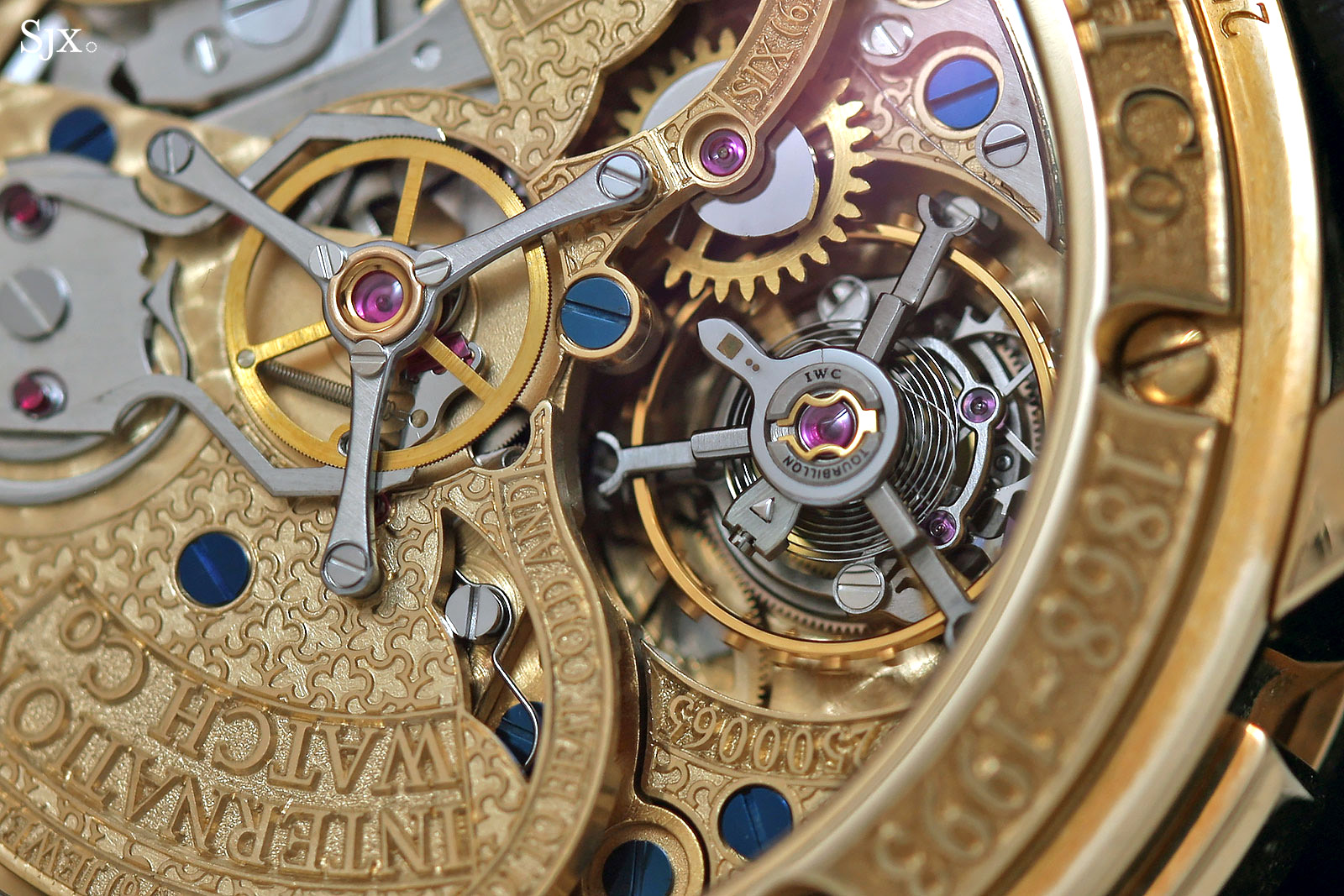 From a historical perspective, the watch is significant for IWC, being a compendium of its modern-day innovation in complications. The movement neatly encapsulates the last threes decades of IWC’s technical developments, containing almost all of the complications that the brand continues to use today, ranging from rattrapante to the perpetual calendar. In fact, the only notable IWC complication that’s missing from the Destriero Scafusia is the Pellaton winding mechanism. A hundred and twenty-five examples of the Destriero Scafusia were made, mostly in yellow gold with silver dials and some in platinum, but also several unique pieces with black dials or gem-set cases.

The last of them was delivered in 1999; it was around then that I saw the watch for the first time, sitting in the accompanying large wooden box with a marquetry lid depicting Schaffhausen in the 19th century. I was impressed then, and I still am each time I see the watch again.