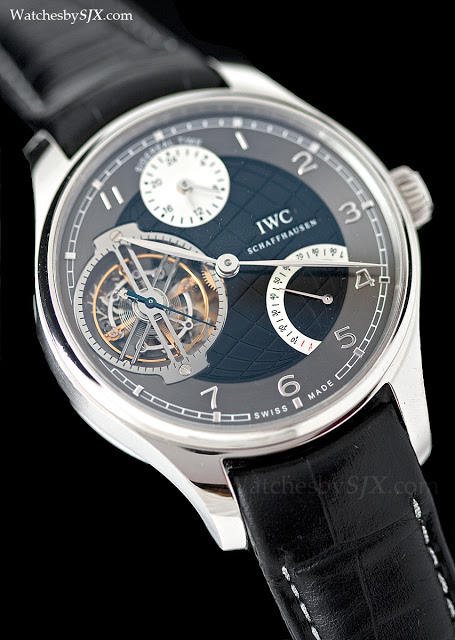 Developed in-house by IWC with help from Jean-Francois Mojon of Chronode, the Sidérale Scafusia costs that much because of several complications (the Il Destriero Scafusia of 1993 may or may not be more complicated). Firstly, it displays sidereal time in the 12 o’clock sub-dial.

Sidereal time is the time based on the Earth’s rotation around a fixed star so it differs from the solar-based 24 hour day. Our conventional solar day, which is 24 hours long, is about four minutes longer than a sidereal day. The sidereal time display on the Sidérale Scafusia has an error of 11.5 seconds a year. But subsequently as the mainspring winds down the constant force mechanism kicks in and the tourbillon moves in one seconds increments, becoming effectively a dead seconds. Over on the back is the star chart display. This will be the night sky from a location of the owner’s choosing. Because the back crystal is polarised, it appears grey during the day and blue after dark. Also on the back is the perpetual calendar display, which is on the perimeter of the star chart. It is not a full calendar however, it has a leap year indicator as well as the day of the day display (out of 365 days).

In addition, the two outer 24-hour scales on the back indicate sunrise and sunset times, for both summer and winter time, as well as solar and sidereal time. All of that means this is a very large watch. It measures 46 mm wide and a hefty 17.5 mm high. Because this watch is sold on order, it is fully customisable. In addition to the star chart, the owner can also specify the dial, case, strap and many other options.

While is this a technically impressive timepiece, I wonder if this brute force approach of piling as many complications into a watch is still as relevant as it was when the Il Destriero Scafusia was unveiled. In addition, while technically accomplished, this watch lacks the engineering simplicity and ingenuity that characterised earlier IWC complications, like the condensed rattrapante mechanism for example. Nevertheless those are personal observations, the fundamental achievements of this watch are obvious.