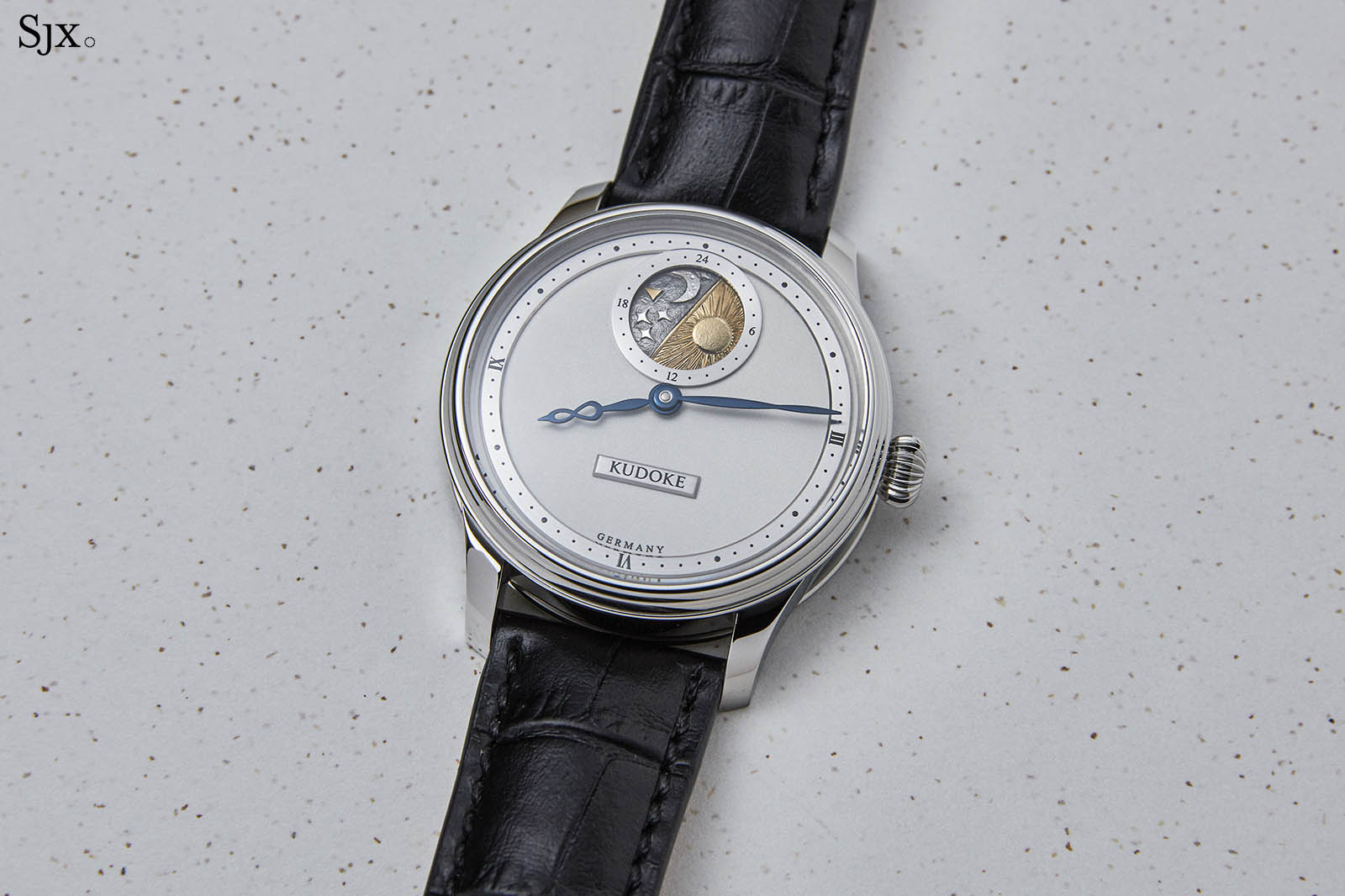 Two years ago, German independent watchmaker Stefan Kudoke announced his first proprietary movement, the Kaliber 1, which was developed in collaboration with Habring2. A year later, the movement has made its debut in a pair of classically-styled watches – the Kudoke 1 and Kudoke 2. Both models mark a stark departure from his earlier watches both in terms of design and price.

Based in a small town east of Dresden, Kudoke was best known extravagantly engraved, skeletonised  timepieces, often powered by a Unitas-based movement (which meant they were all relatively large). But the latest Kudoke watches are far more understated, as well as attractively priced, starting at just over US$7,900.

In fact, these watches present a compelling proposition, offering an unusual level of hand-decoration for its price bracket, save for a handful of other small independents, such as D. Dornblüth & Sohn. 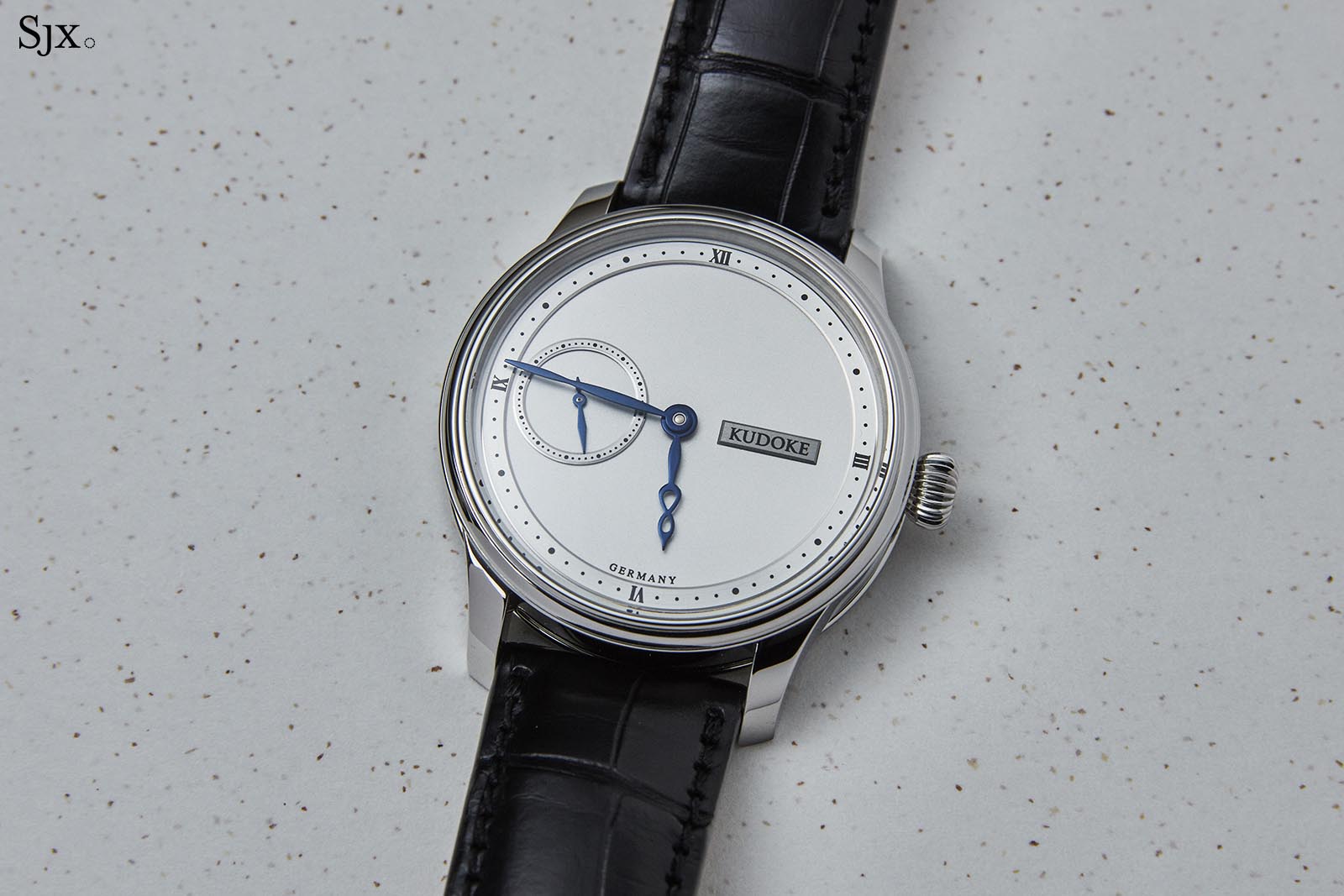 The Kudoke 1 is a well-designed watch showing the hours, minutes and seconds, while the Kudoke 2 replaces the seconds with a wonderfully engraved day and night indicator.

Both watches are compact and thin enough to wear comfortably, though not quite so thin as to be true formal watches. Instead they feel like elegant everyday watches with discreet, appealing details in the hands, dial and movement. 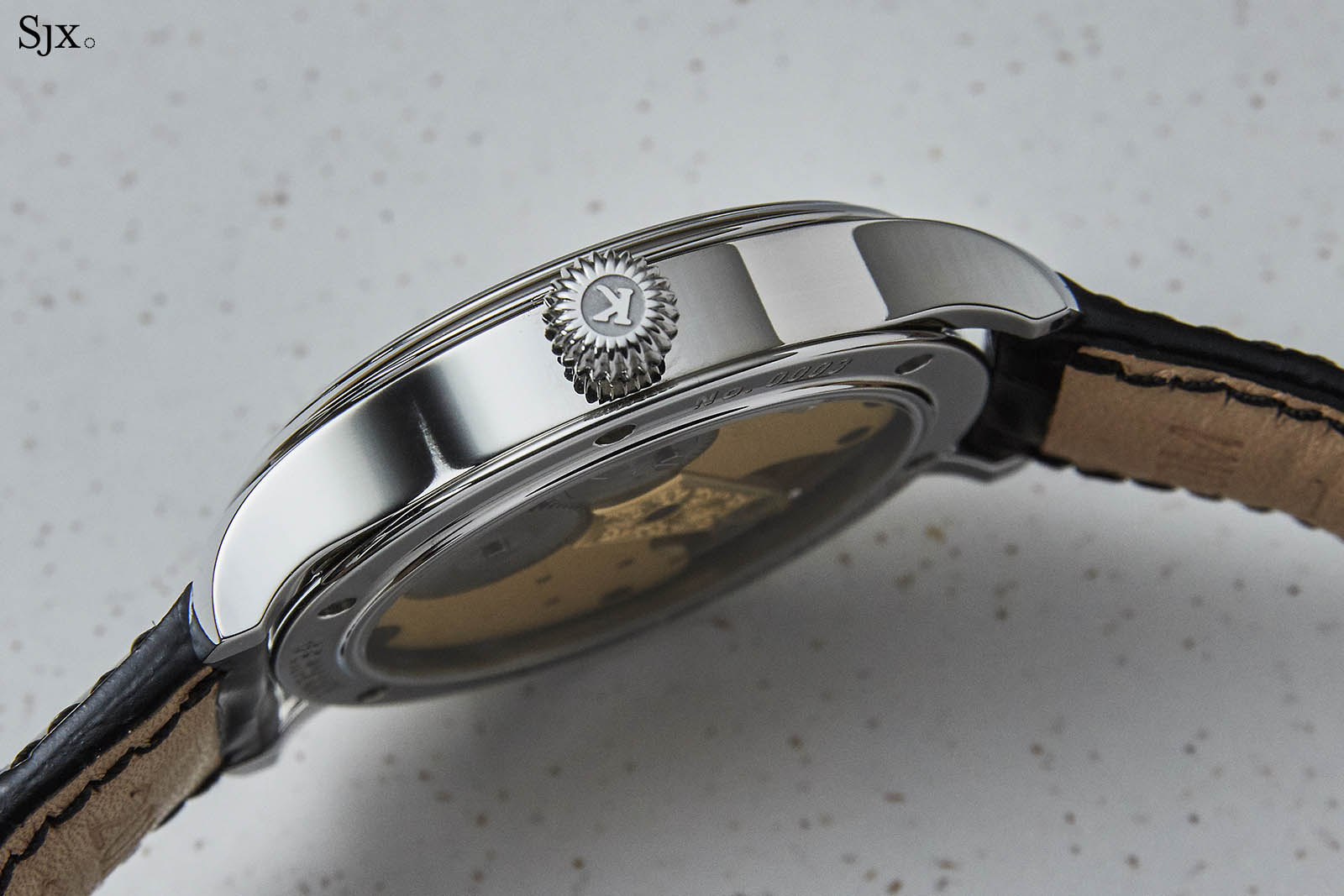 The two have the same steel case that’s 39 mm wide, but differ slightly in thickness due to the addition of the domed day and night indicator in the Kudoke 2. The thickness is accomplished by varying the height of the bezel, while retaining the same case middle and back, making the increased height imperceptible except when both are laid side by side.

The case is simple and effective – it’s entirely polished front and back – but not elaborate; the key features of the watch inside the case. 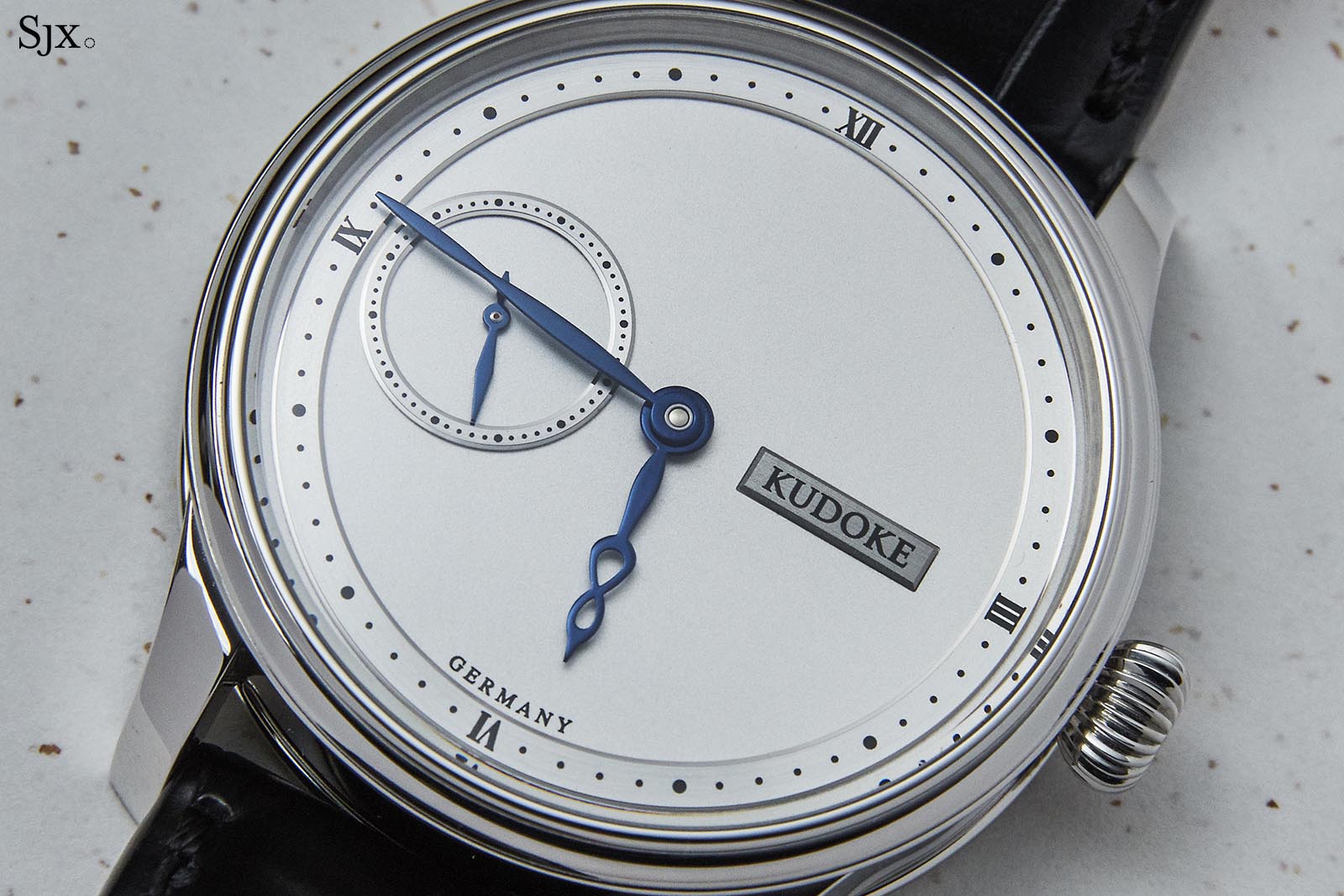 Because the Kaliber 1 relies on the gear train architecture of the Valjoux 7750 chronograph movement (thanks to its Habring2 roots), the small seconds on the Kudoke 1 is located at nine o’clock, with a nameplate on the opposite side of the dial for balance.

The overall design of the dial is elegant and simple but with a couple of distinctive details such as the narrow, raised chapter ring for the minute track, but most importantly: the unusually-shaped blued steel hands. Though fairly simple in form, the hour hand is surprisingly original; its tip shaped like the infinity symbol, a detail that adds life to an otherwise sedate dial.

Though the rest of the dial is simple in dial, the details are well-executed. While the dial surface has fined, frosted surface, the chapter ring for the hours and minutes are brushed, as is the nameplate, which has bevelled edges. 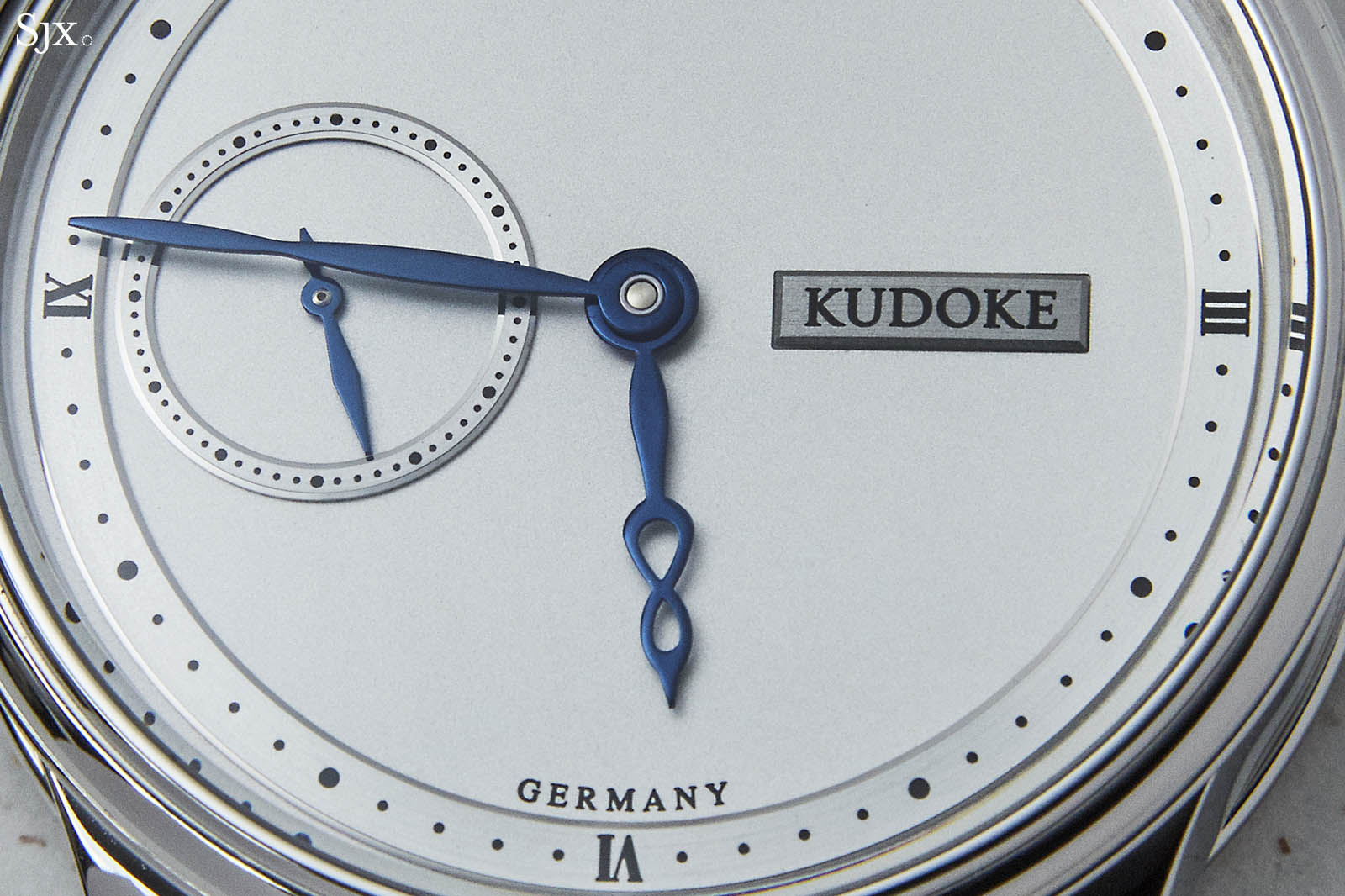 Even more appealing is the Kudoke 2, because it offers a small slice of brand’s signature – Stefan Kudoke’s artistic hand-engraving.

Measuring 10.7 mm high, the watch dispenses with the seconds and instead adds a day and night indicator at 12 o’clock, creating a perfectly symmetrical dial. 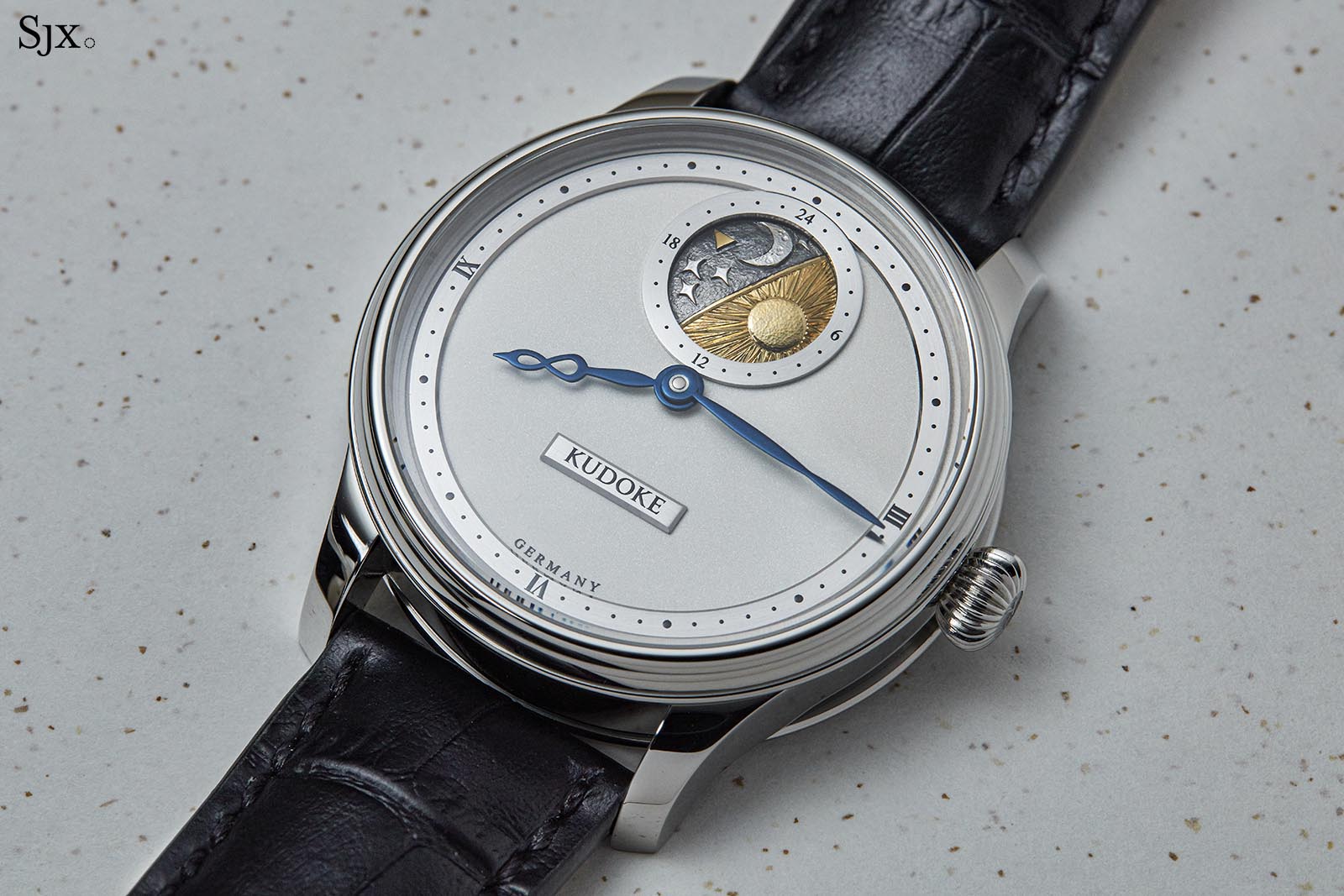 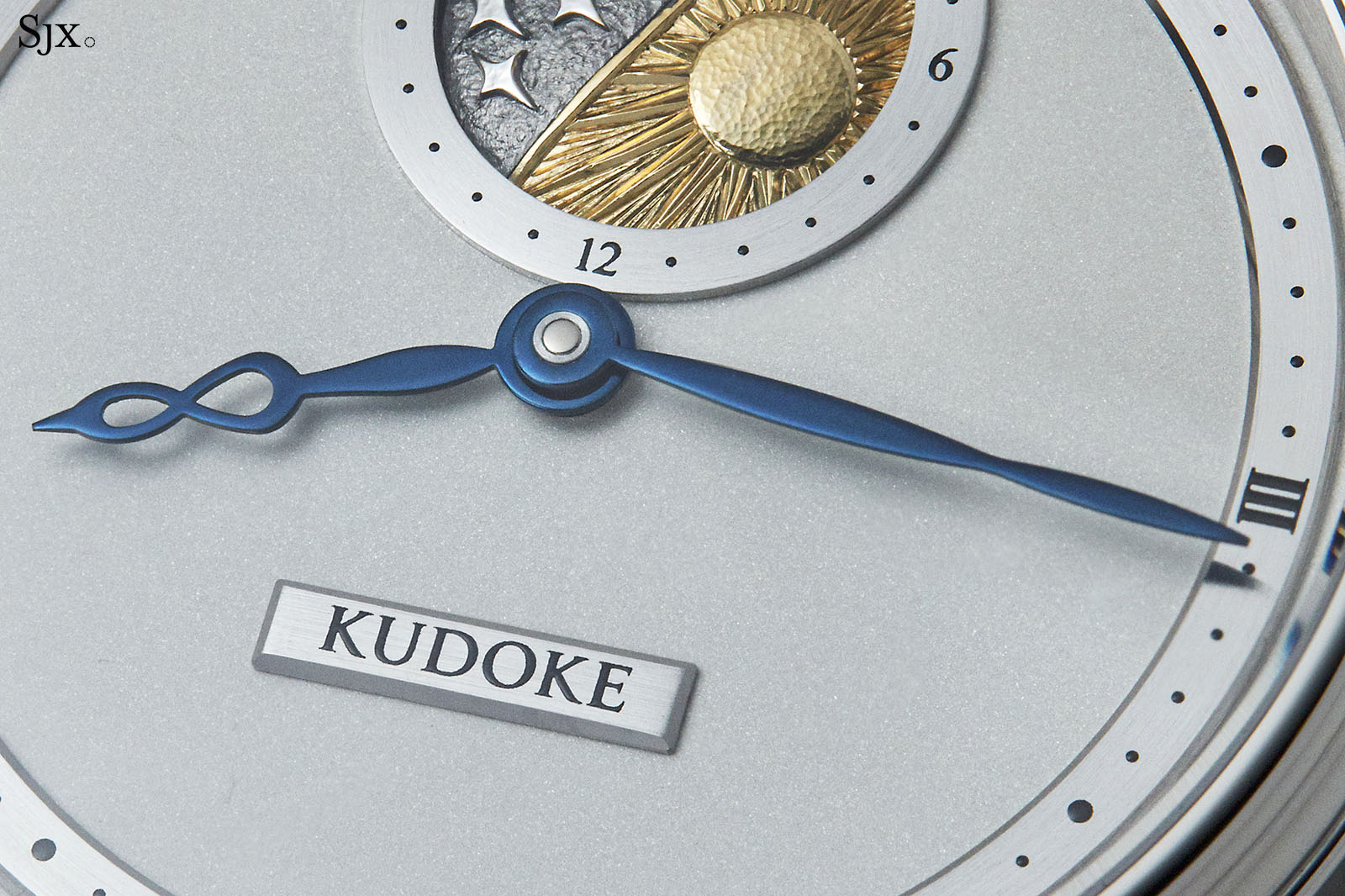 Making one revolution a day in sync with the hour hand, the 24-hour disc is hand-engraved and electroplated in three colours – gold for daytime, as well as white and black rhodium for the night.

The gilded half depicts the sun finished with a hand-hammered surface, radiating beams of light, while the rhodium-plated half represents the night, with the moon and stars engraved in relief, with a few craters hammered onto the moon for good measure. And golden triangle on the 24-hour disc indicates the hour of the day on a brushed, rhodium-plated hour ring.

The dial makes use of two types of numbers: the main chapter ring for the time has Roman numerals at the quarters, while the 24-hour ring has Arabic numerals. That mix of numerals, along with the stock typography used for the numerals, are the only bits of the design that could be improved. 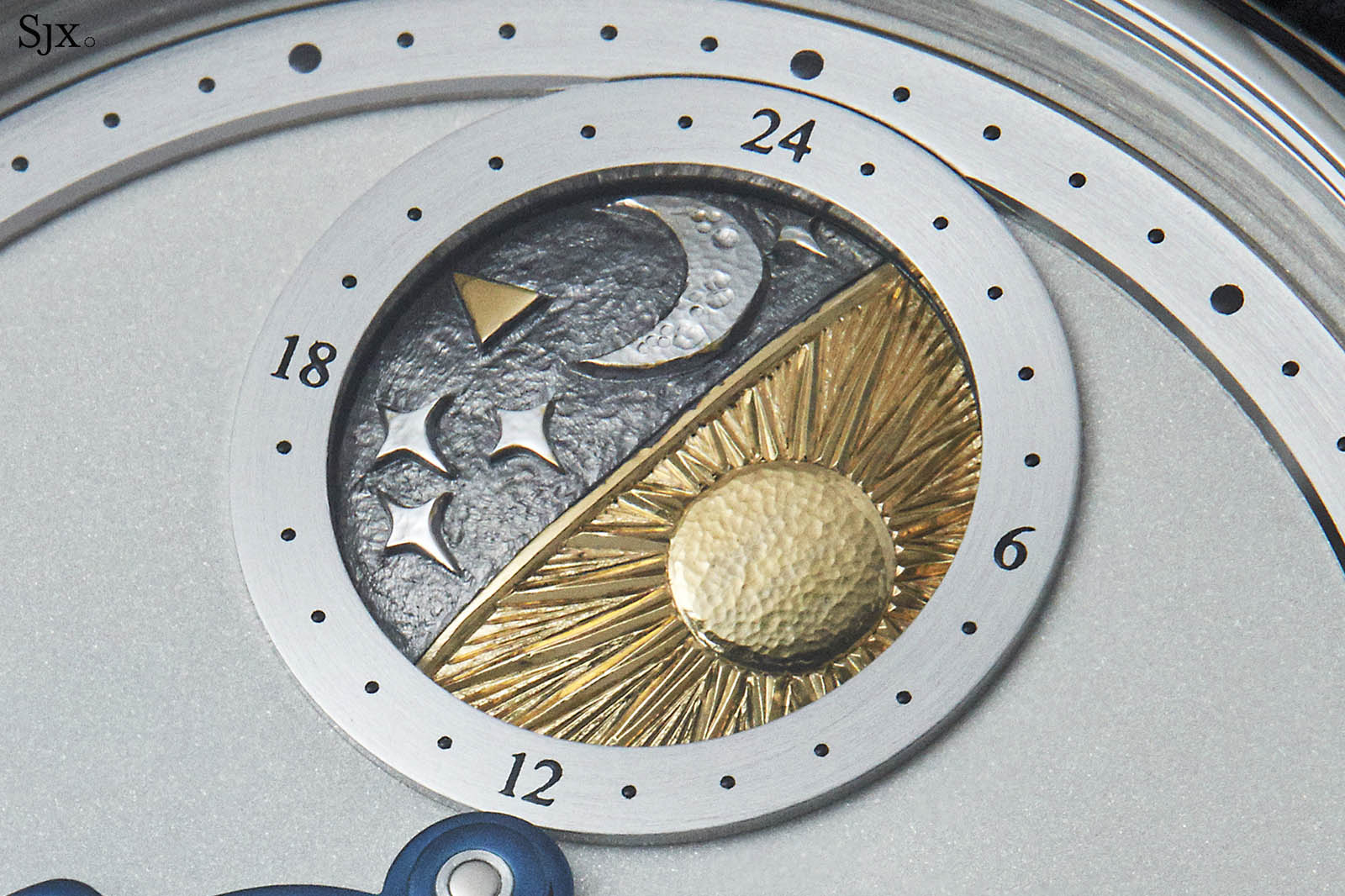 Both watches are powered by the hand-wound Kaliber 1 that was developed with the help of Habring2, which also produces many of the components, but finished and assembled by Kudoke.

The hand-wound caliber was inspired by 19th century English pocket watch movements, hence the distinctive style of frosted, gilt bridges and a large, engraved balance cock in the middle of the movement. 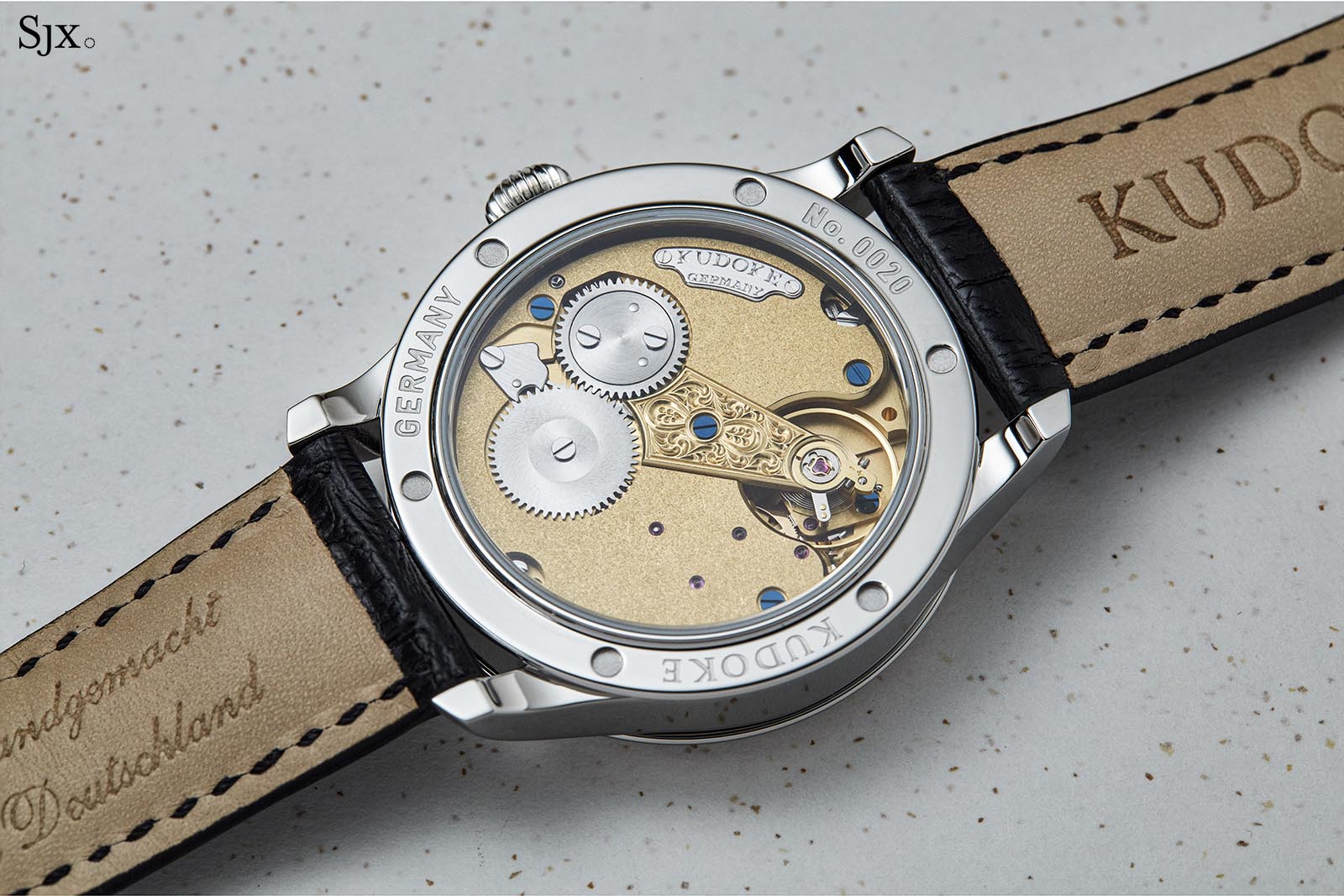 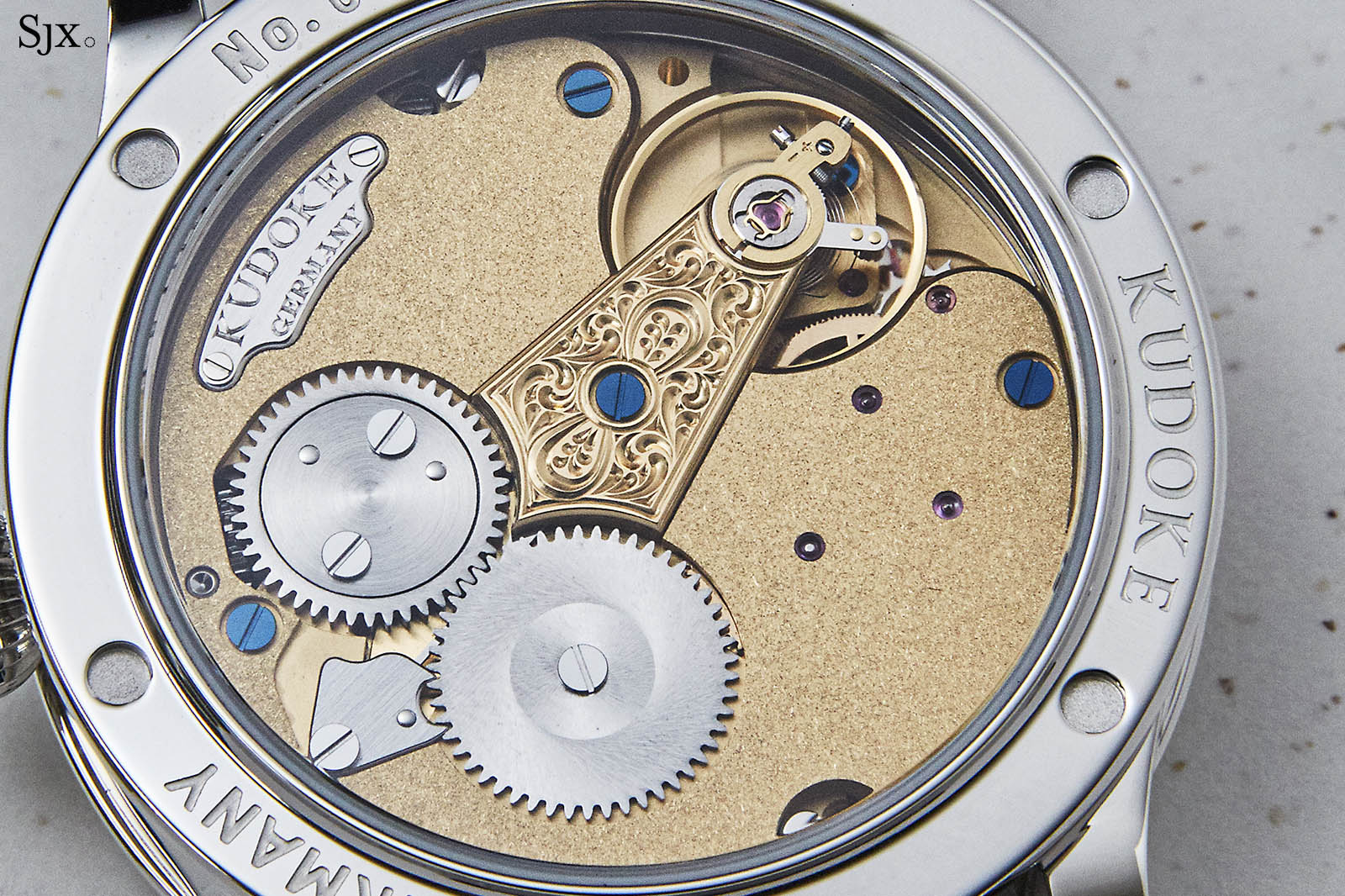 The most distinctive aspect of the movement is the oversized, elaborately decorated balance cock. It is covered in floral engraving, which has a subtle infinity symbol incorporated into the motif. A gilt full bridge covers all the moving parts, save for the crown wheel and ratchet wheel – which also form an figure-of-eight infinity symbol – creating a pleasing, symmetrical movement layout.

While the balance cock is engraved with a skilled hand wielding a burin, the fine frosted finish is achieved through what Kudoke describes as abrasive reaming, where a mix of oil and abrasives are brushed across the bridge in a circular motion.

The only bit of the movement that looks out of place against the old-school finishing and design is the regulator index and smooth balance wheel, both of which are reliable but unfancy modern components. 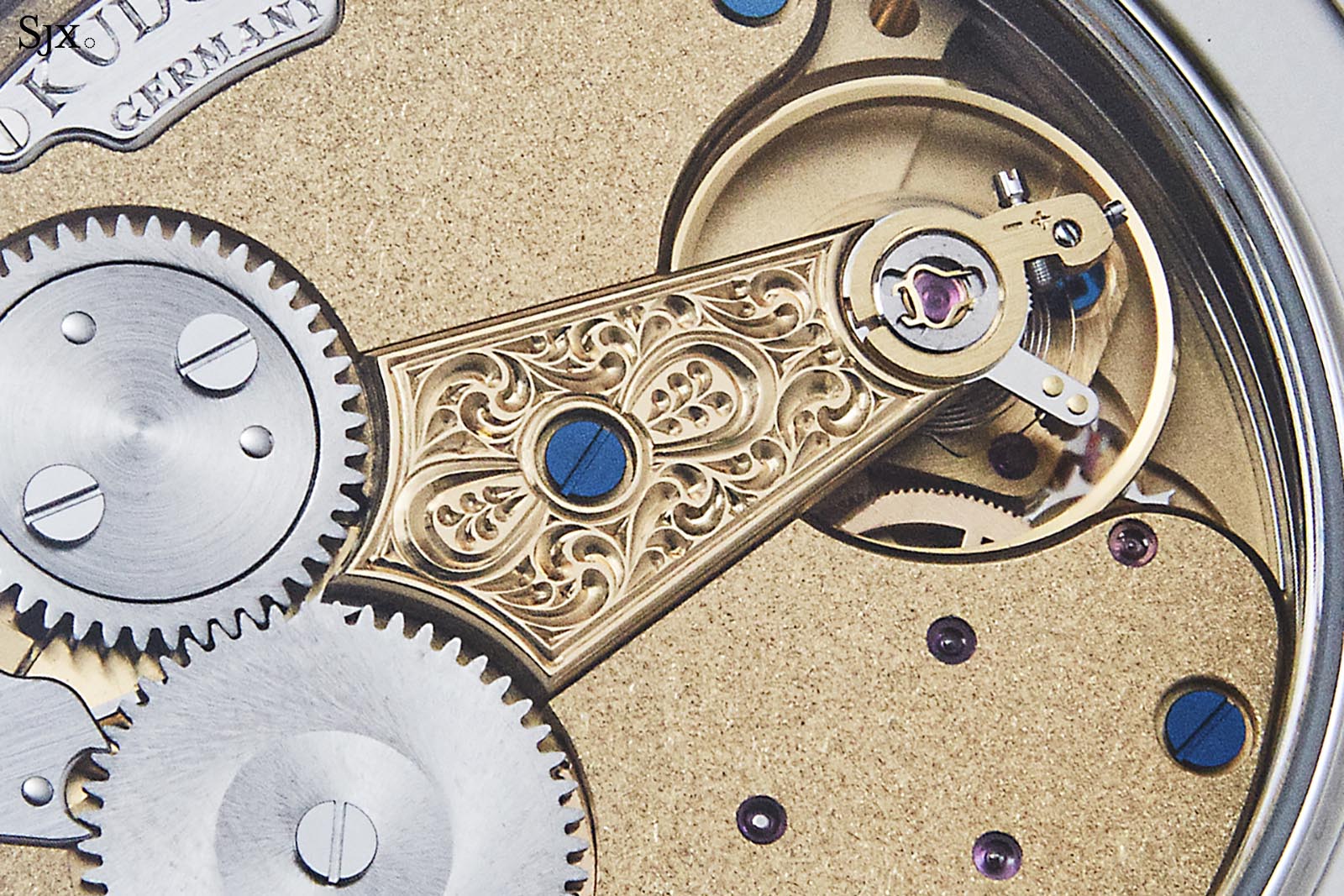 Being based on the architecture of the Valjoux 7750, the position of key components in the Kaliber 1 is identical. The barrel sits at seven o’clock, with four tiny jewels for the wheels of the going train and escape wheel, ending with the balance at two o’clock. However, it is important to note that the Kaliber 1 (and by extension the Habring2 movements it is derived from), is a proprietary movement developed by Habring2  with its own, unique components that are not made by ETA.

Both the Kudoke 1 and Kudoke 2 are extremely appealing and well-designed both inside and out. On top of that, they offer a level of handwork that is uncommon at this price point. And though the movement architecture of the Kaliber 1 based on a Valjoux 7750, it has been modified, reproduced and finished to a highly respectable degree.

While both models are attractive, the Kudoke 2 is more compelling, and worth the 20% or so extra because it is more unusual mechanically, while also incorporating the hand-engraving that Kudoke is known for.