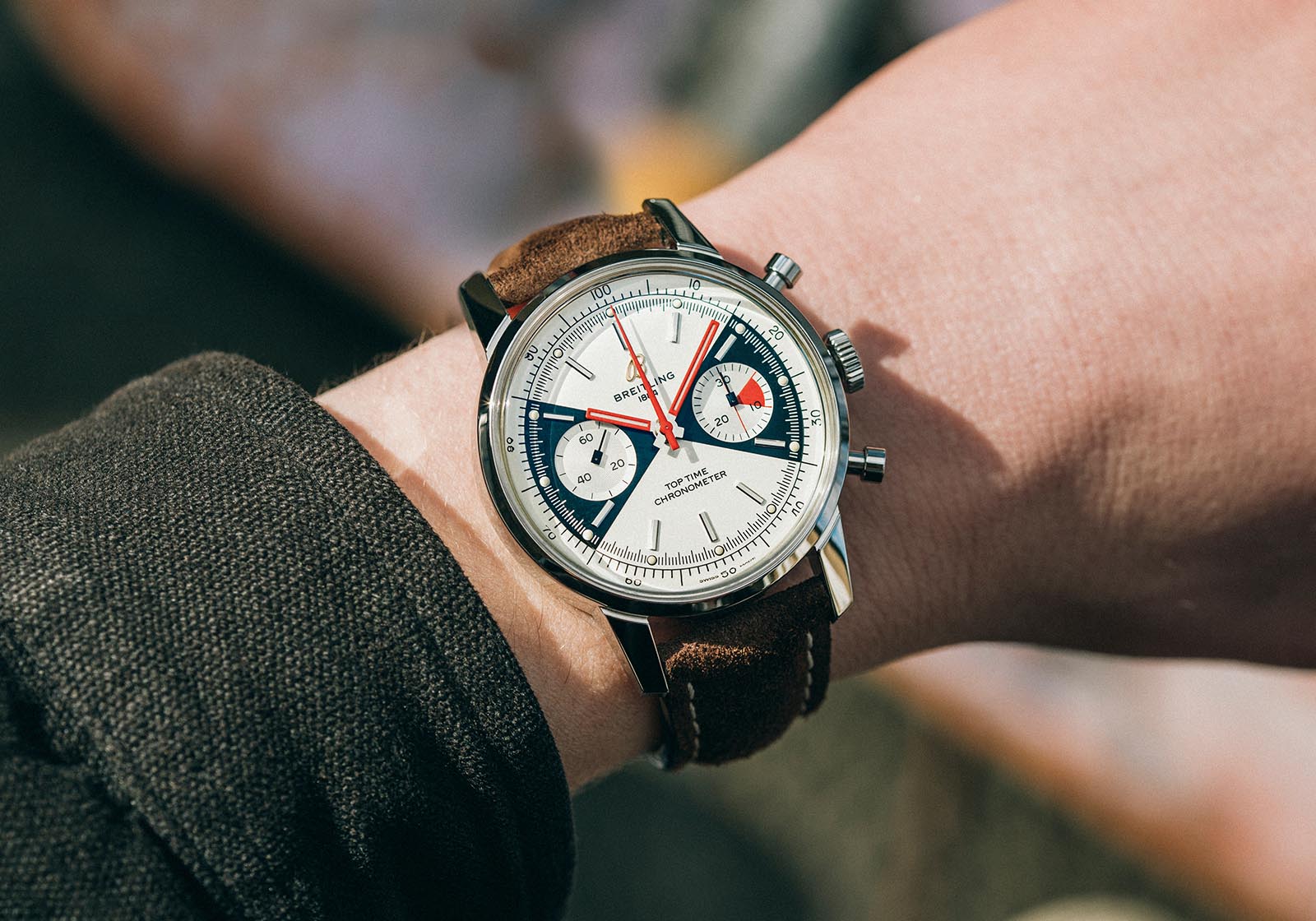 Following the faithful and well-received Navitimer 806 and AVI Ref. 765 1953 re-editions – both very much instruments for pilots back in the day – Breitling has now recreated a distinctly different watch from the archives – the Top Time “Zorro”. And while the new Top Time takes its cues from the past, it will be sold entirely online via Breitling’s website, at least initially.

Produced from the 1960s to the 1970s, the Top Time was Breitling’s simpler and more affordable line of chronographs designed to appeal to younger buyers – which is also the rationale behind the new remake. Unlike the Chronomat or Navitimer, which were mostly no-nonsense tools equipped with slide-rule bezels for pilots to do in-flight navigation, the Top Time did away with the slide-rule bezel and relied on a more generic style emblematic of the era. 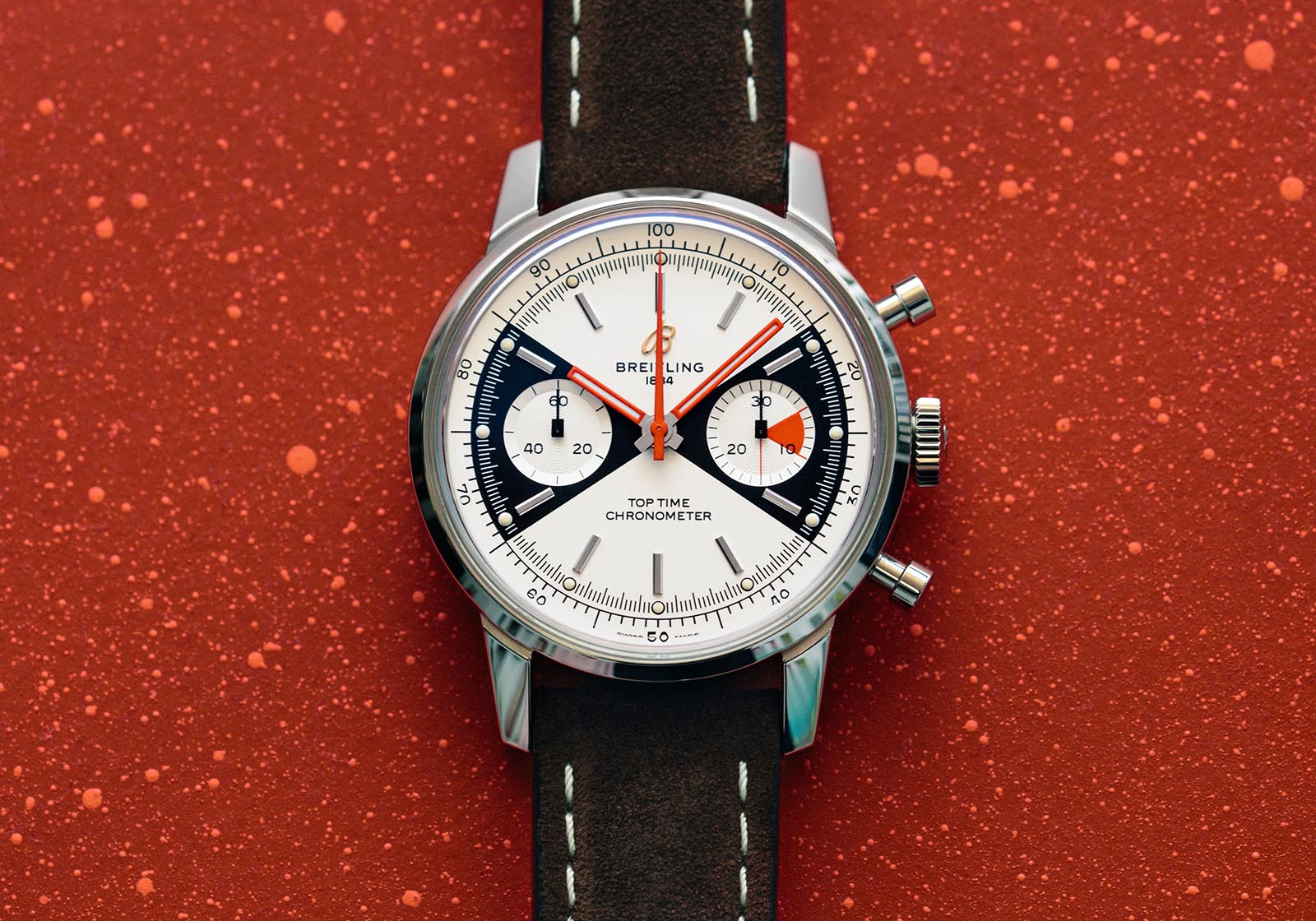 Despite being an entry-level mode, the original Top Time had a starring appearance on the big screen: a Top Time ref. 2002, with a “reverse panda” dial and a fictional Geiger counter, was worn by Sean Connery in Thunderball. The very watch worn in the movie sold for £103,875 at Christie’s in 2013, not long after surfacing at a car boot sale where it was purchased for £25.

While the “panda” or “reverse panda” variants are arguably the iconic versions of the Top Time, the new remake is modelled on the more unusual Top Time ref. 2003 equipped with a gold-plated case and “Zorro” dial (or the ref. 2001 with the same dial and a solid 18k gold case). 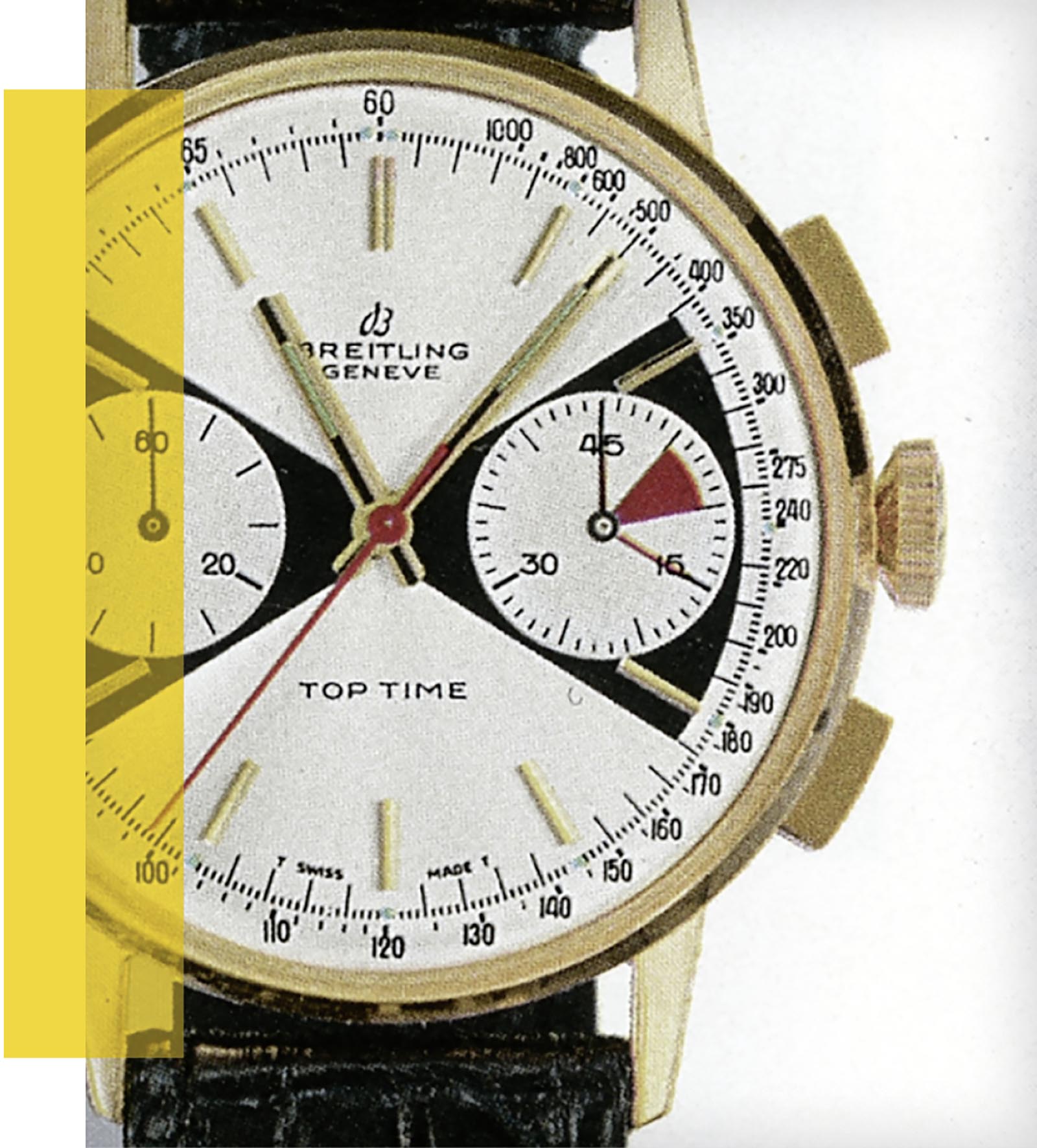 Unlike the Navitimer 806 and the AVI Ref. 765 re-editions that were straight-up reproductions down to the smallest detail, the new Top Time is a mix-and-match of various vintage Top Time references, combined with a few tweaks.

The most distinctive aspect of the new watch is the unusual “Zorro” dial, which embodies the experimental spirit of watch design in the decade before the Quartz Crisis. 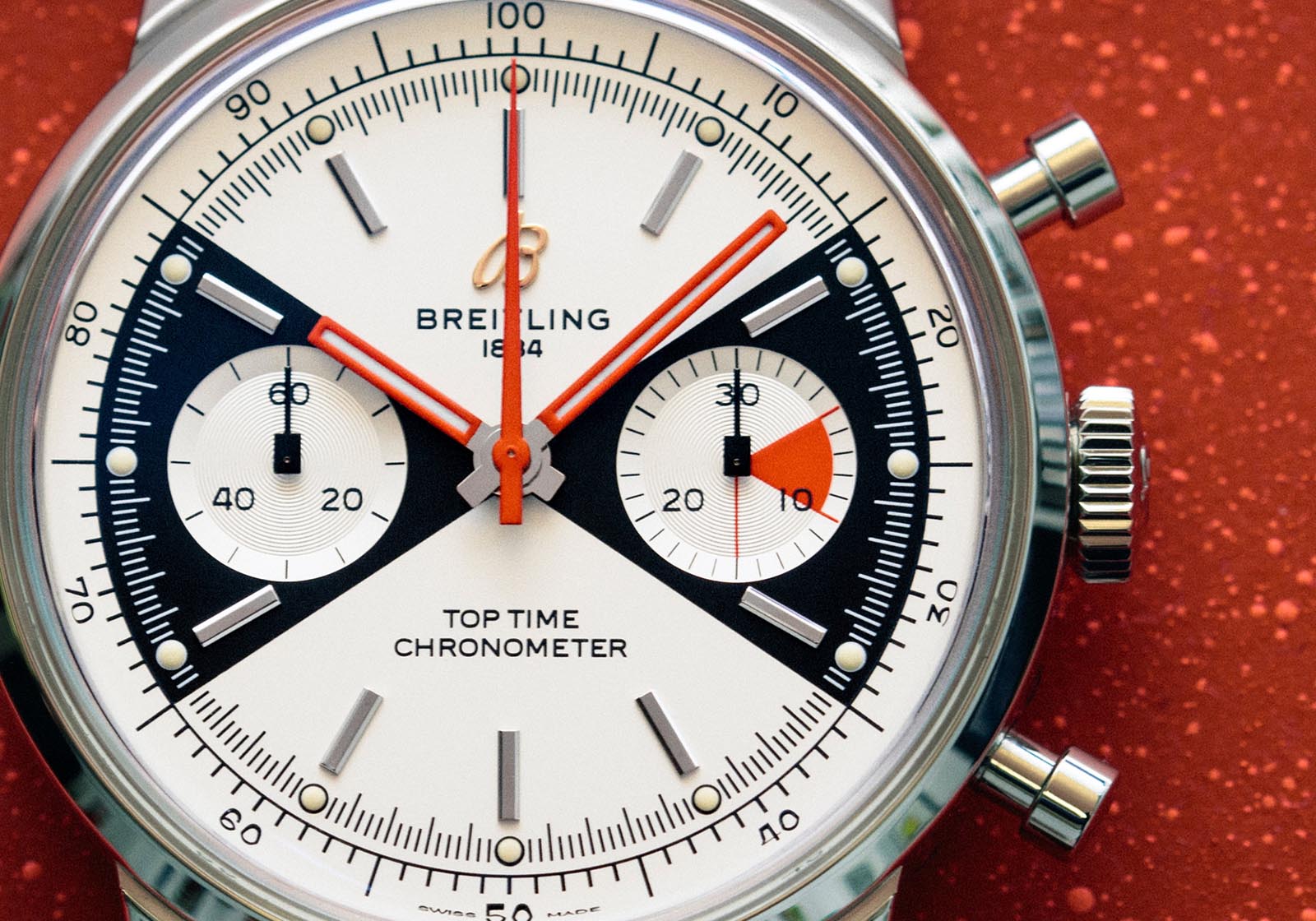 With luminous hands and lume plots

Named after the black bands framing the chronograph registers that bring to mind Zorro’s half-face mask, the dial is found only on the gold-plated or solid-gold versions of the vintage Top Time. In fact, the “Zorro” dial is more commonly found on the Breitling Sprint, another line of entry-level chronographs the brand produced in the 1960s.

The remake adopts the “Zorro” dial, but with a few changes. One is the decimal scale, instead of a tachymeter scale. And the other are the bright red central hands. 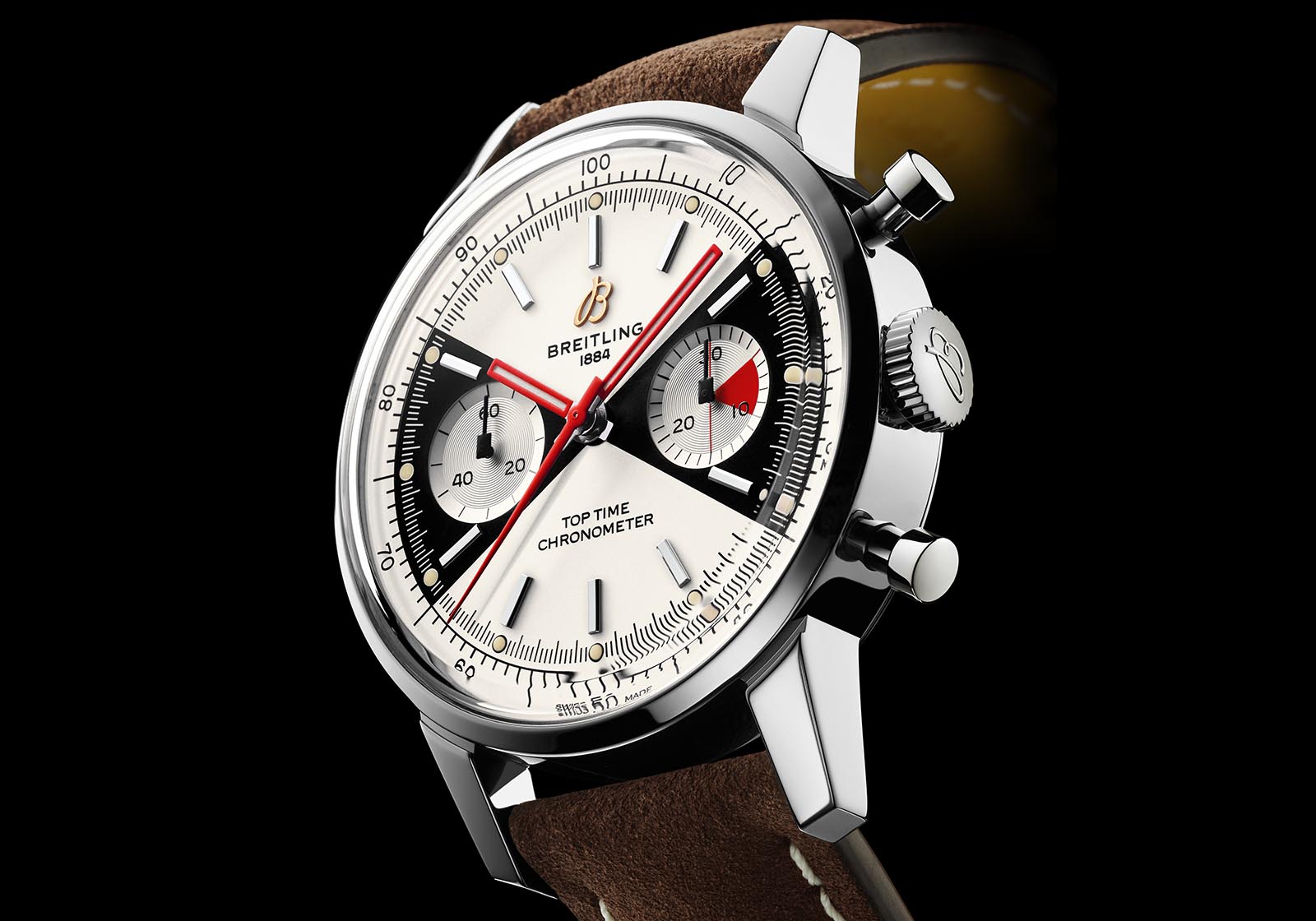 Though the dial is derived from the gold-plated vintage model, the case of the remake is in steel. As a result, it reproduces the look of the vintage model in steel and remains true to the original, with the same polished finish, slim bezel, and angular lugs.

And like most remakes, it is larger, being 41 mm instead of the original’s 35 mm. 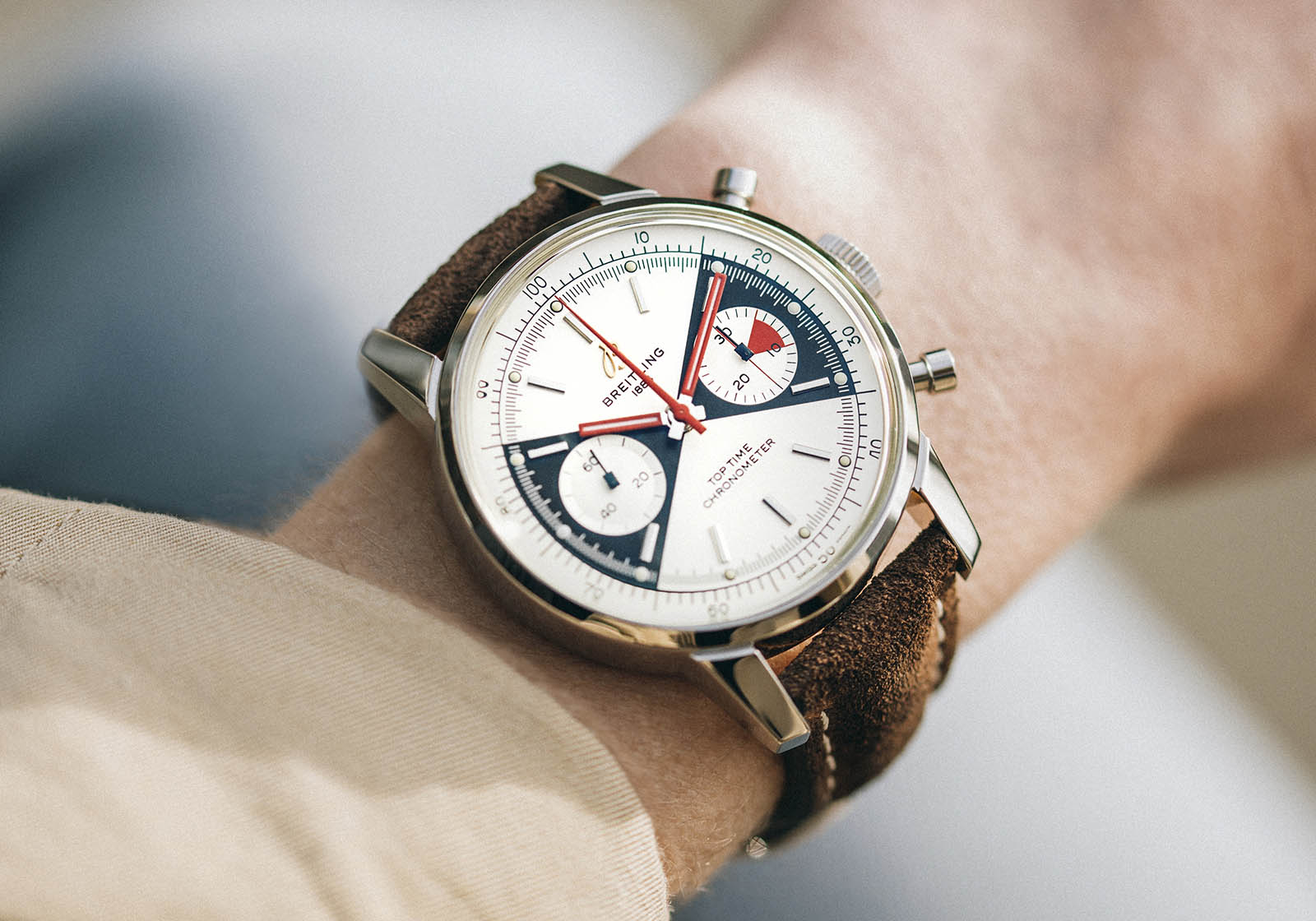 The vintage Top Time was powered by a hand-wound Valjoux 7733, but the remake naturally relies on a newer calibre, though produced by the same company (or more specifically, its successor). It’s equipped with the COSC-certified automatic Calibre 23, which is actually the cost-effective and robust ETA Valjoux 7753 (basically an Valjoux 7750 sans hour counter and date).

Lastly, the Top Time remake is also distinguished its digital “passport”. It’s the first Breitling wristwatch that utilises blockchain technology (the same thing that underpins cryptocurrencies like Bitcoin) to verify and guarantee its authenticity as well as track ownership and servicing. All of that information is secured in its “passport”, which was built together with Parisian tech start-up Arianee.

Fittingly, the watch will be available only on Breitling’s website for now, and then at its boutiques upon request later in the year. 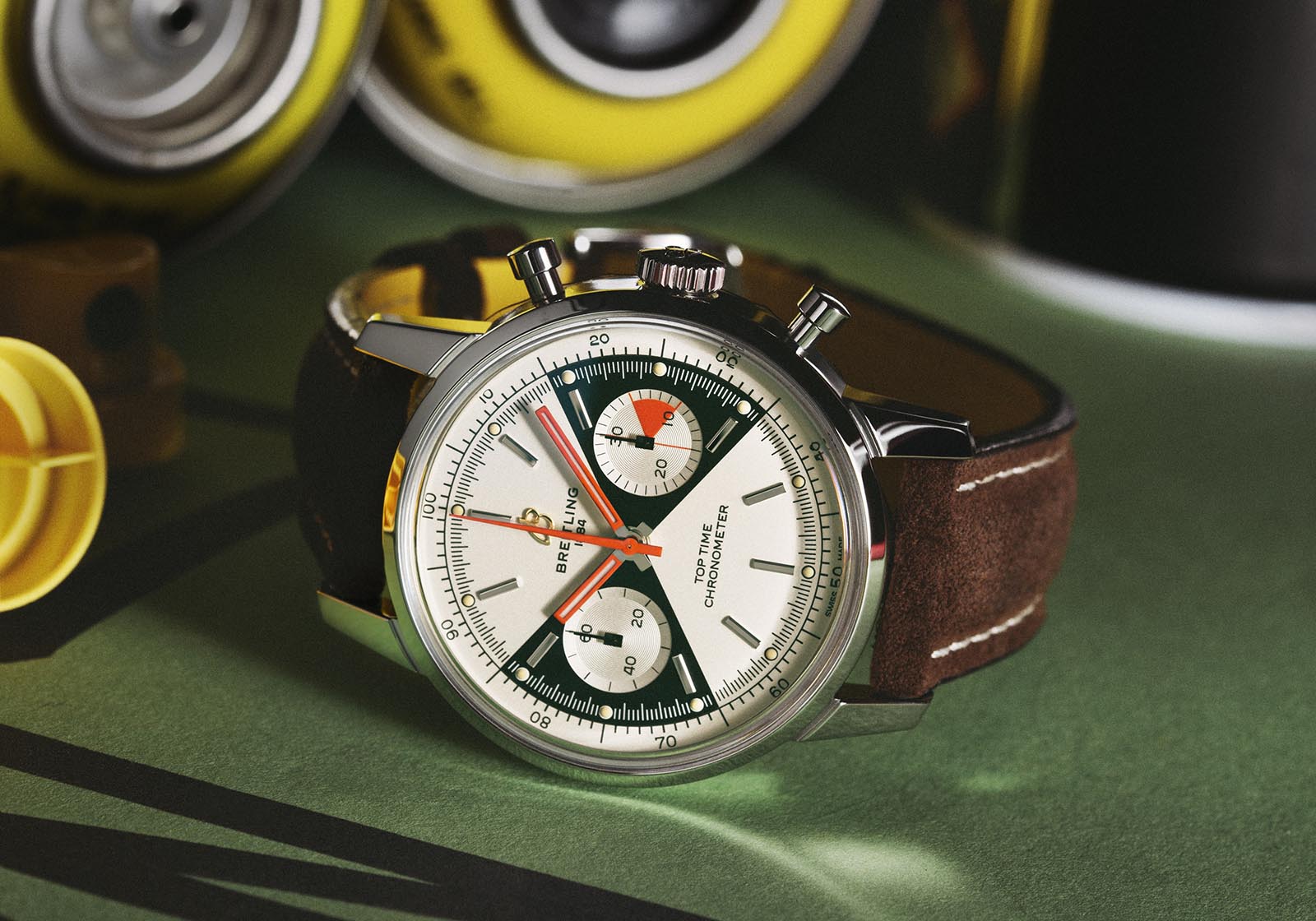