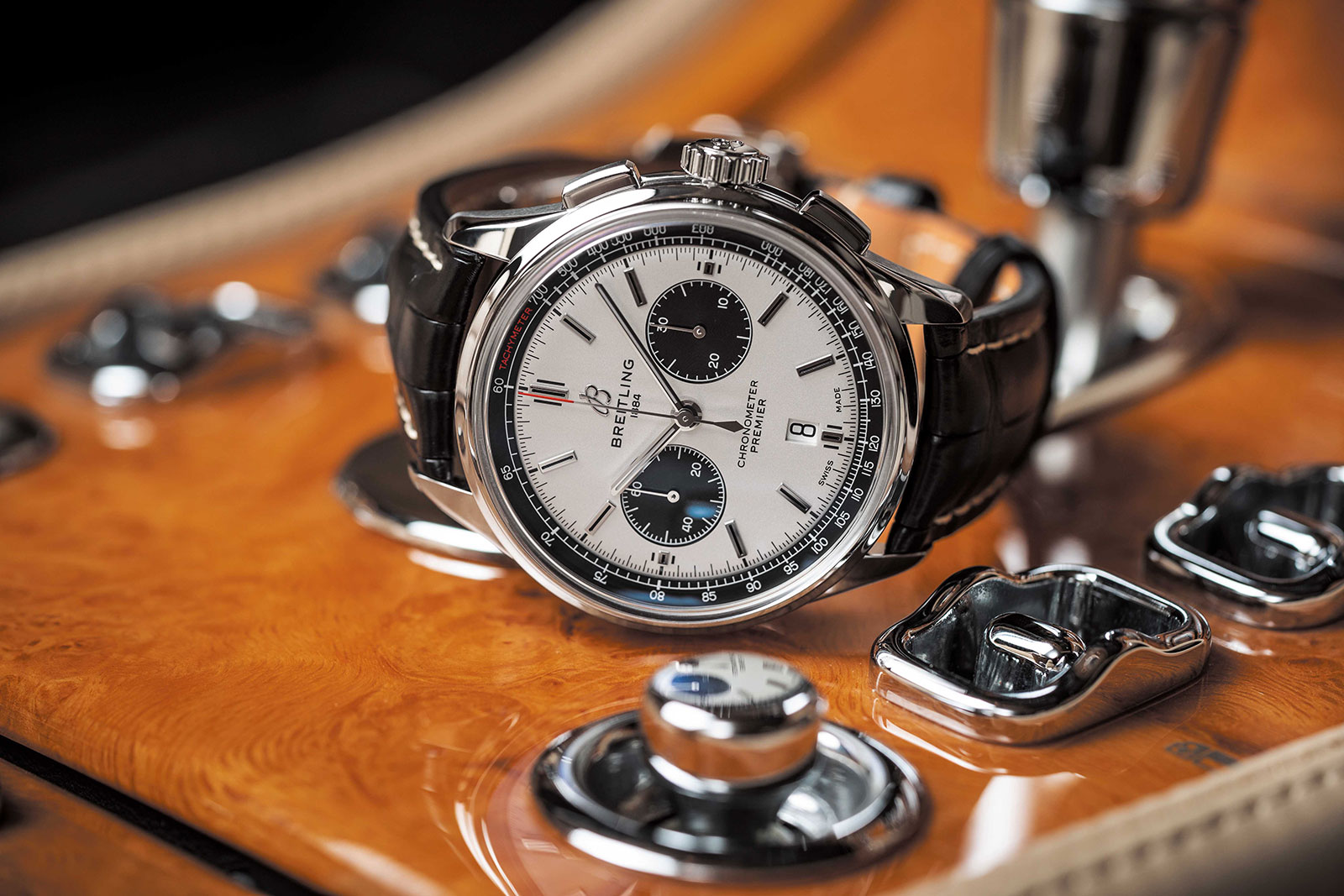 Historically a simpler chronograph than the better known Navitimer or Chronomat, the Breitling Premier is the latest collection to debut under the aegis of chief executive Georges Kern, who is remaking the brand from top to bottom, most notably by moving away from oversized, extremely shiny wristwatches with fussily designed dials.

Conceived as Breitling’s “elegant” watch, the modern day Premier takes its cues from the namesake original of the 1940s, which gives it a sleeker, cleaner aesthetic than the average Breitling. And it’s also worth pointing out that the most recent iteration of the Premier from the late 1990s that had cursive Arabic numerals has been sensibly forgotten. While the new Premier line made up of four models – plus a new Breitling for Bentley chronograph – all share a few key features. To start with, the range is characterised by moderately sized cases – the largest is a 42mm chronograph – bevelled lugs, alternating brushed and polished surfaces on the case, as well as lengthwise fluting on the flanks of the case. Domed sapphire crystals with antireflective coating are also common to all models.

The Premier dials are two-part, with a separate, sloped flange for either the minute track or tachymetre. Hands and hour markers are baton-shaped. And while the movements across the line differ, all are COSC-certified chronometers. The Premier is a full line-up of watches, with all models available with a variety of metallic finish dials in sedate colours: black, grey, dark blue, and silver. Various strap options are also on offer, including a new take on Breitling’s signature slanted-link Pilot bracelet, which now has narrower, longer links for a slightly more formal look. The range starts with the Premier Automatic 40, a 40mm, time-0nly automatic powered by the Breitling Calibre 37, which is actually a variant of the ETA 2892. Identical in size is the Premier Automatic Day & Date 40, which has the calendar in windows. Inside is the Breitling Calibre 45, which is derived from the ETA 2824. And the top of the line model is the Premier B01 Chronograph 42, which is equipped with the in-house Breitling B01 movement. Besides the “bi-compax” layout of the chronograph, another feature that indicates it’s an in-house movement are the contrast colour sub-dials. A slightly more upscale version is the Premier B01 Chronograph 42 Bentley British Racing Green. It’s perhaps the most sedate Bentley wristwatch Breitling has ever made in the 16-year span of the brand’s collaboration. The Bentley edition has two distinguishing features. One being the dial, which is a dark green with black registers, and the other a pearled steel plate bearing the carmaker’s name screwed on the case side. The rest of the watch is identical to the standard Premier B01. The new Premier collection reaches retailers and boutiques October 2018. Prices are as follows for the base models fitted with a calfskin strap:

Crocodile straps are an additional US$200, while a folding clasp is extra US$250. And a matching steel bracelet is US$750.