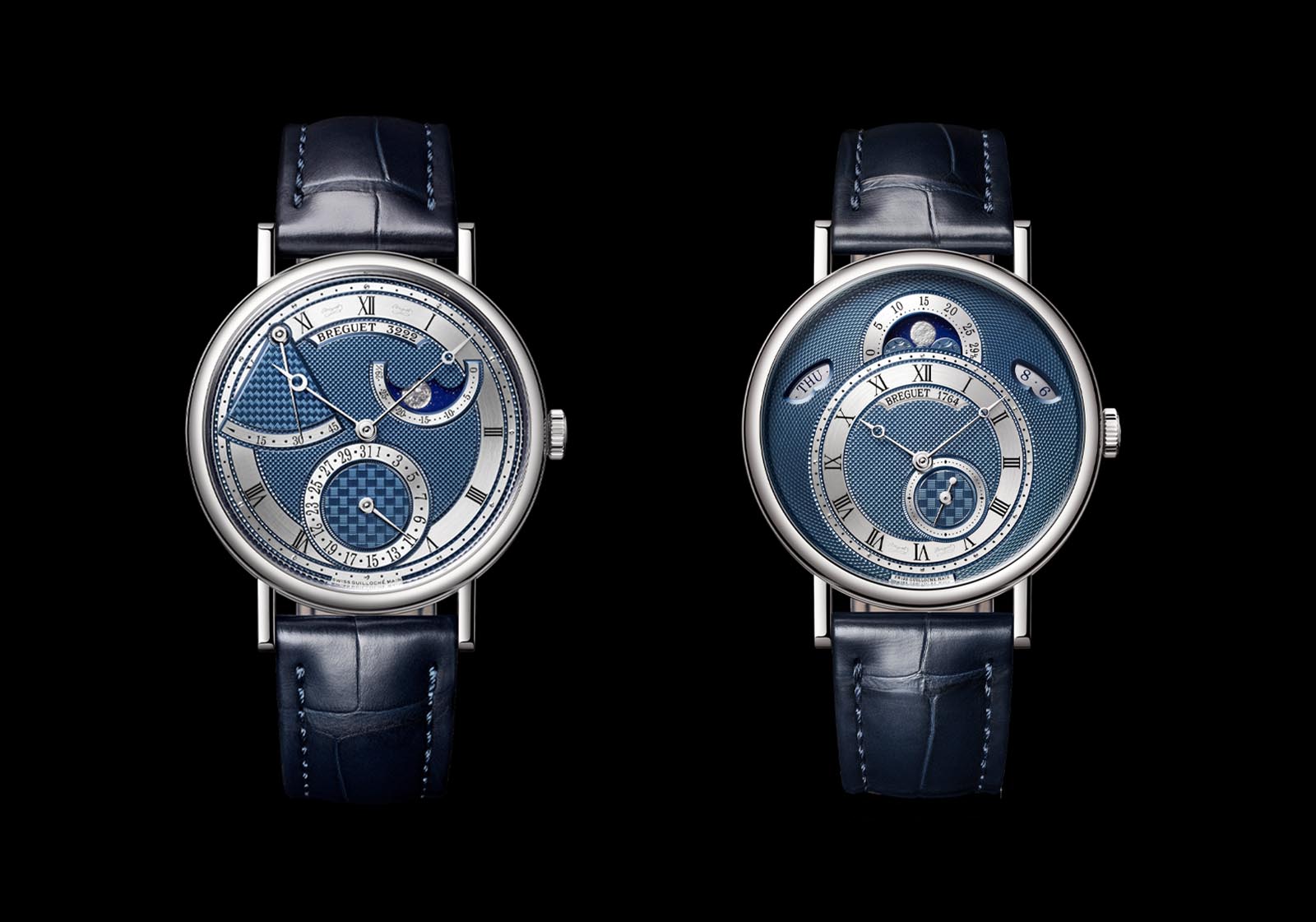 Perhaps the quintessential modern Breguet watches, having been in the line-up for decades, the Classique 7137 and Classique 7337 have elegant proportions and classical dials that showcase the exacting art of traditional engine-turning.

And they have just been face-lifted, retaining the traditional look while getting sleeker engine-turning and a streamlined moon phase. Though the changes are slight, the watches differ significantly in look and feel from the initial versions.

Unusually, the new dial is also offered in dark blue (with a white gold case), historically an uncommon colour for Breguet. The other combination is the conventional rose gold with a silver dial. Both models feature a slim, 39 mm case with straight lugs and a reeded case band. 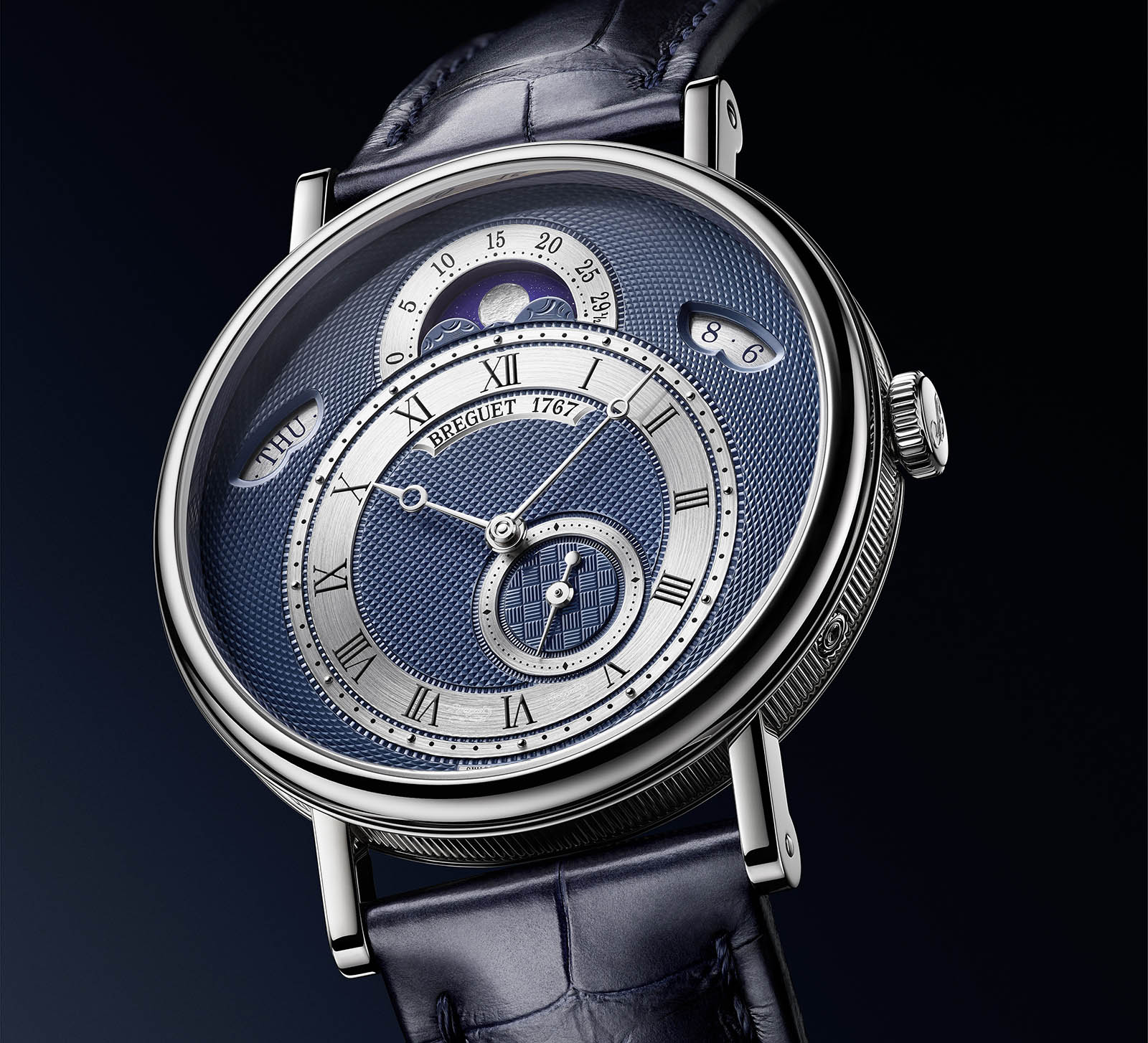 Mechanically, they are identical to the earlier generation versions. The movements of both watches vary in height and calendar complications, but they share the same ultra-thin cal. 502.3 as the base. The Classique 7337 in pink gold with a silver dial

Before going on to the details of the two, it’s worth a quick look at their history.

The two models are descended from the refs. 3137 and 3337 respectively, both watches designed by the independent watchmaker Daniel Roth when he helped create the modern Breguet identity in the late 1970s. Mr Roth, in turn, was inspired by important, 19th century Breguet pocket watches; he successfully translated Breguet’s glorious past into the modern era.

Being small watches by modern standards, the two were replaced by the Classique 7137 and Classique 7337 in 2014 and 2009 respectively.

As with many Breguet wristwatches, the Classique 7137 features a dial that was adapted from a historically-important pocket watch – the Perpétuelle no. 5. One of Breguet’s rare self-winding watches, hence the “perpetual” moniker, the no. 5 featured a toc, or dumb, quarter repeater where the time is struck by a hammer against the inside of the case rather than on gongs, producing a muffled sound.

The Perpetuelle watches – there were a handful made – were important enough that the company recruited master watchmaker Michel Parmigiani to build a series of approximate replicas in the 1990s, and today Breguet itself produces an exact replica in limited numbers. 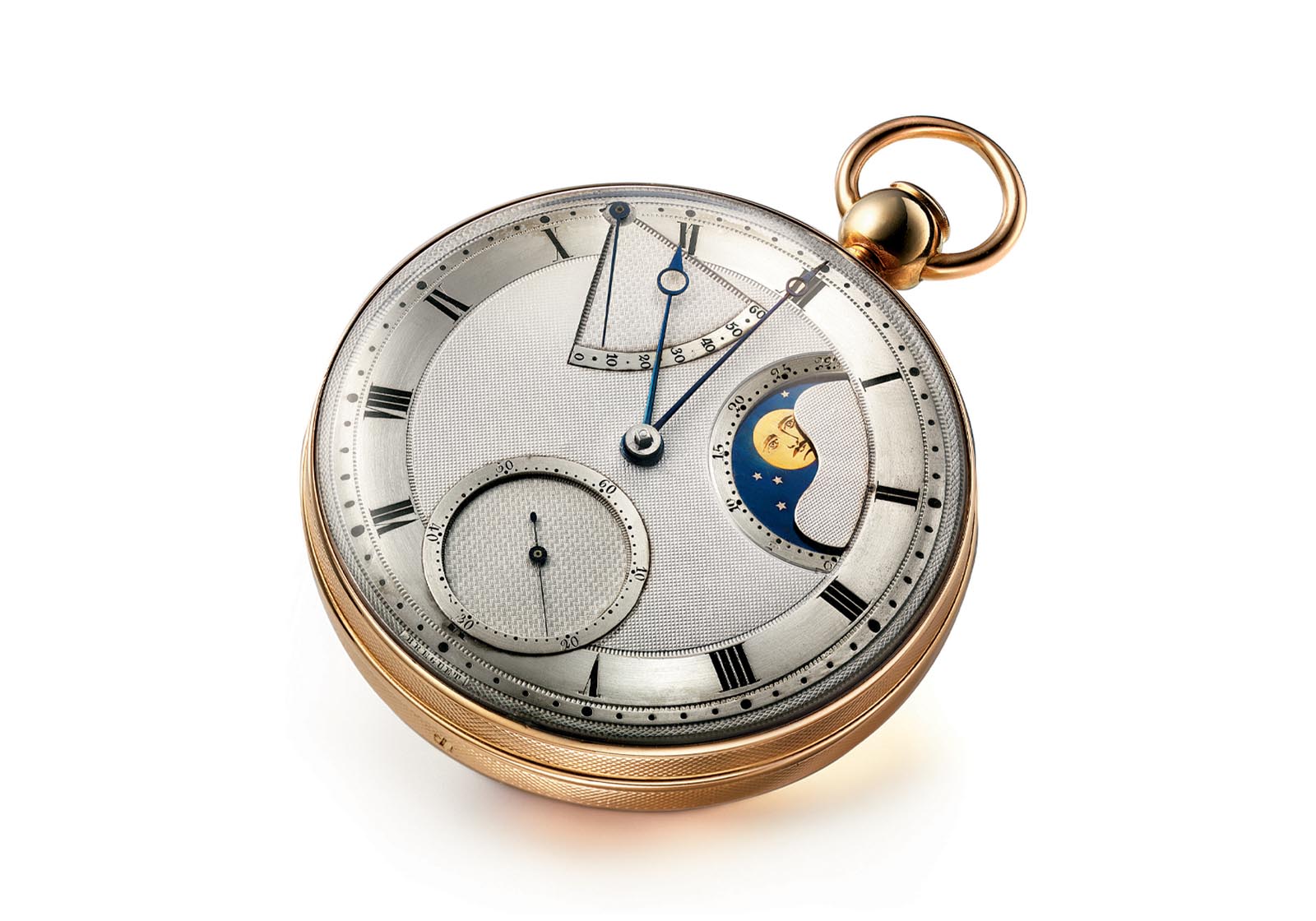 The Classique 7137 adopts the asymmetrical yet balanced dial of the Perpetuelle no. 5. Though not exactly identical, the Classique 7137 is close enough it is as classically beautiful as the pocket watch. The Classique 7137 in white gold with a blue dial

The dial, made of solid gold, is finished with guilloche executed with a hand-operated rose engine as well as a straight-line engine, while the chapter rings and scales are finished with concentric brushing.

Just as on the first generation 7137, the dial guilloche is in three distinct patterns – panier maillé, or basket weave, for the power reserve indicator; damier, or checkerboard, for the date display; and clous de Paris, or hobnail, for the rest of the dial. But in contrast to the first generation that combined three starkly-different patterns, including a radial floral motif, the patterns on the new watch model blends together harmoniously. 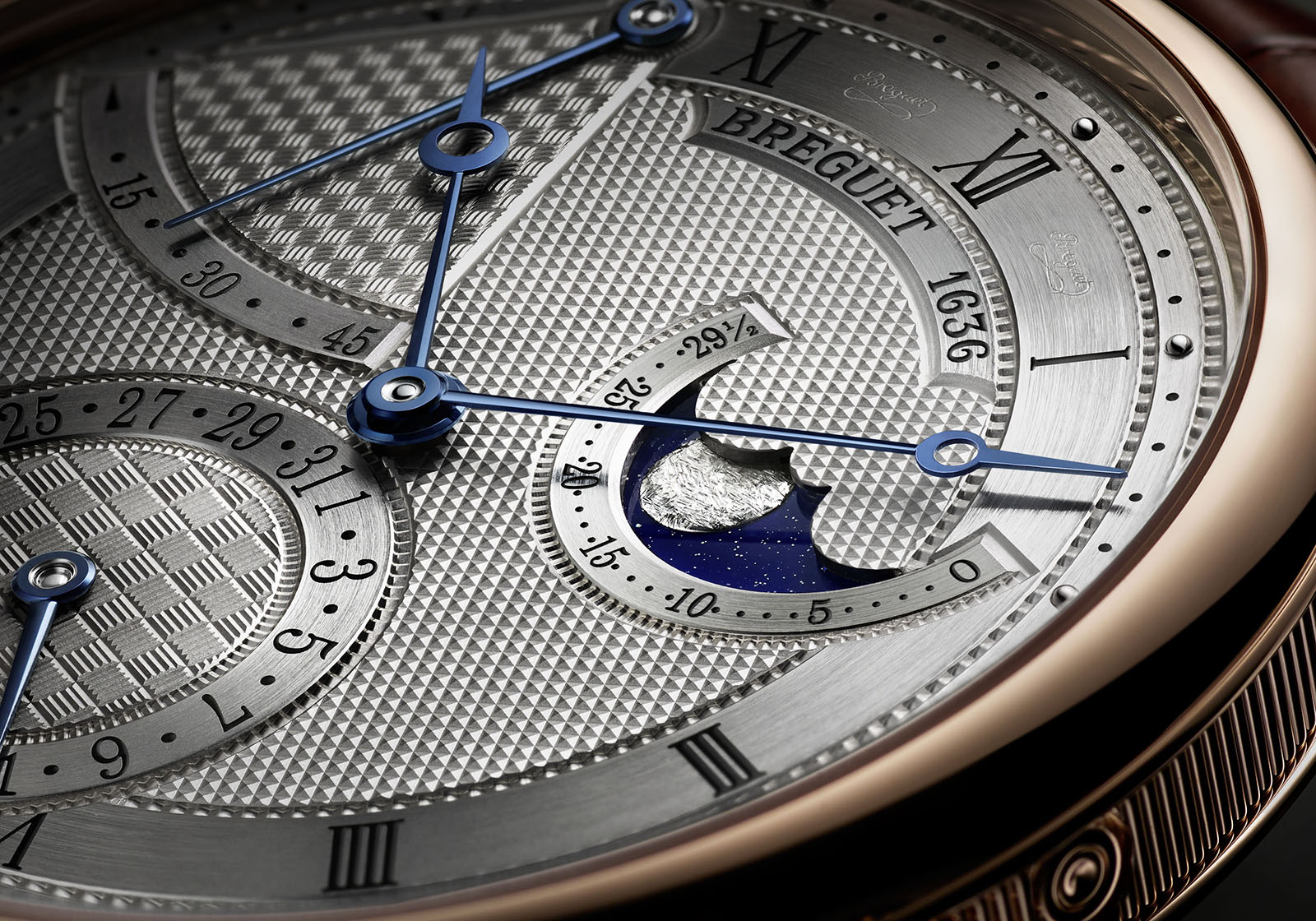 In addition to the revamped engine-turning, another major update is the moon phase display. It now features a lacquered disc inset with a solid gold moon that’s engraved to resemble the real lunar surface, replacing the traditional, man-in-the-moon motif of the first generation.

In terms of proportions and mechanics, the watch remains unchanged across generations. The case retains the same slim profile that’s just 8.65 mm high. 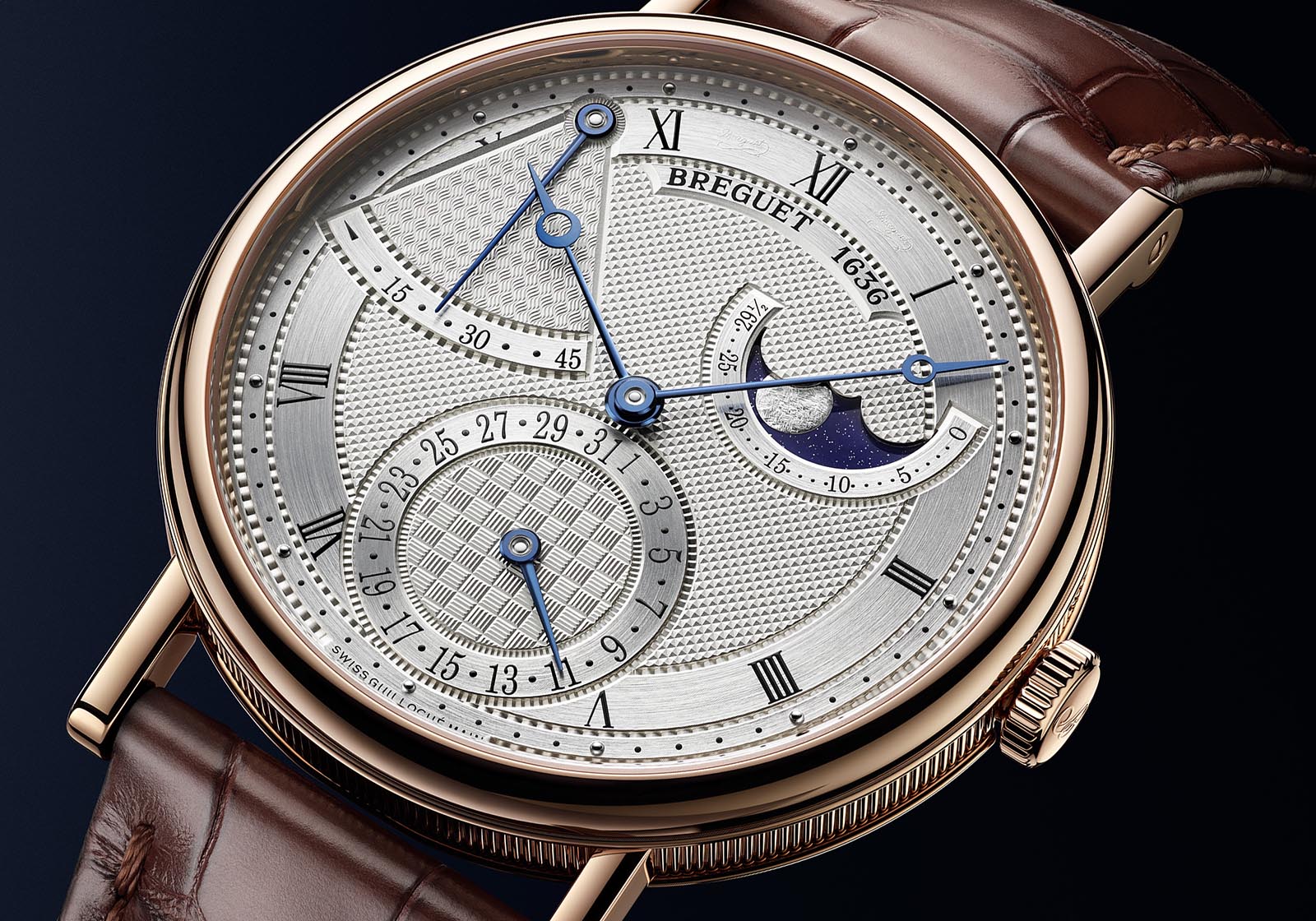 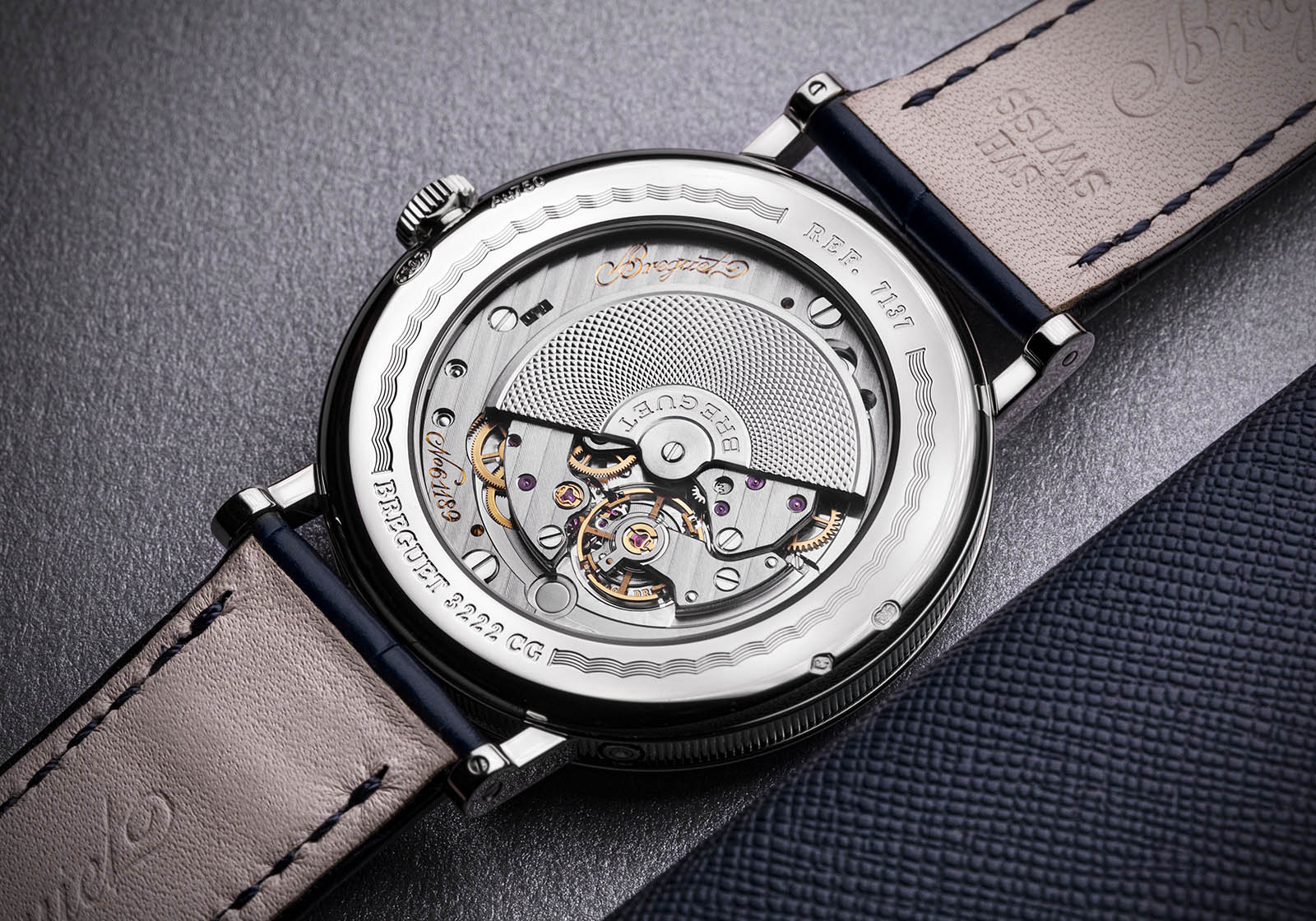 While it has been substantially upgraded over the years to include a free-sprung balance as well as a silicon lever and hairspring, the cal. 502 still retains its distinctive architecture, namely an off-centre, solid-gold rotor that occupies three-quarters of the movement plate as well as an open barrel, all in the name of thinness. The white-gold rotor engine-turned with a barleycorn motif

Like its sibling, the Classique 7337 was derived from an important, original Breguet pocket watch – the quarter-repeating watch no. 3833 featuring a calendar and moon phase. Notably, the no. 3833 was one of Breguet’s garde temps timepieces, built to be a precision chronometer.

The dial layout of the Classique 7337 is a faithful reproduction of the no. 3833, channeling the feel of the original without being an exact remake. The hour and minutes are indicated in a large sub-dial with an off-centered small seconds. At 12 o’clock is the moon phase, which is flanked by a day and date display. The Classique 7337 in pink gold

The 7337 has received the same makeover as the 7137, again dispensing with the contrasting guilloche. The dial is finished with a trio of guilloche – grain d’orge, or barleycorn on the periphery; clous de Paris for the hours and minutes sub-dial; and damier for the seconds.

And like on the new 7137, the moon phase disc features a lacquered sky with a gold moon, instead of the moon with a face. 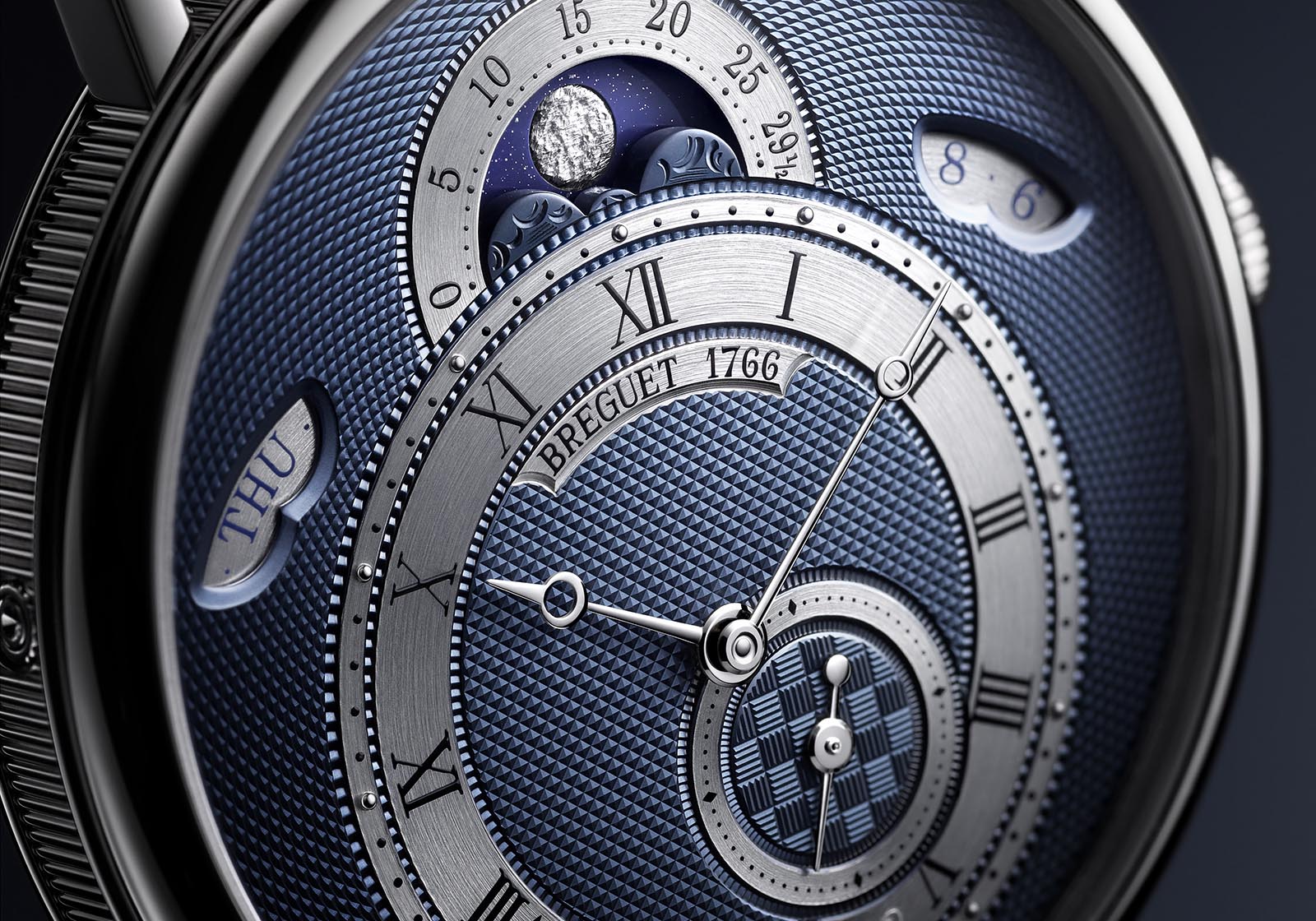 Hand-guilloche dial executed with a rose and straight-line engine