Backed by Chopard and taking the name of a noted 18th century French watchmaker, Ferdinand Berthoud made its debut in 2015 with the Chronomètre FB 1. Though unusual in style with an octagonal case, the FB 1 boasts an impressively constructed movement developed and manufactured by the same facility responsible for Chopard’s top-of-the-line L.U.C calibres; the project was the brainchild of Chopard co-president Karl-Friedrich Scheufele.

At its core the FB 1 is an elaborate – and delightfully anachronistic – tribute to 18th century marine chronometers inside and out. The subject of four patents, the unusual calibre is very much antiquarian horology; it is constructed with pillar-style architecture and contains a chain-and-fusée, feeler-and-cone power reserve mechanism, and a large tourbillon with central seconds.

Since the debut of the FB 1, there have been as many as ten subsequent variations – which is probably too many but it doesn’t diminish from the intrinsic, technical qualities of the watch – with one of the most recent being the Chronomètre FB 1 “Oeuvre d’Or” launched last year.

Mechanically identical to the other iterations, the Oeuvre d’Or is distinguished by extra decoration, namely an engraved and grained gold dial as well as gold movement bridges engraved with a repeating pyramid motif.

A tribute to marine chronometry

Modern day Berthoud watches are inspired by the works of its 18th century namesake who was a Swiss watchmaker based in Paris. Along with his arch-rival Pierre Le Roy, Ferdinand Berthoud (1727-1807) played an instrumental role in the development of marine chronometers, landing him the post of clockmaker to the navy and subsequently, horologist to the King of France. 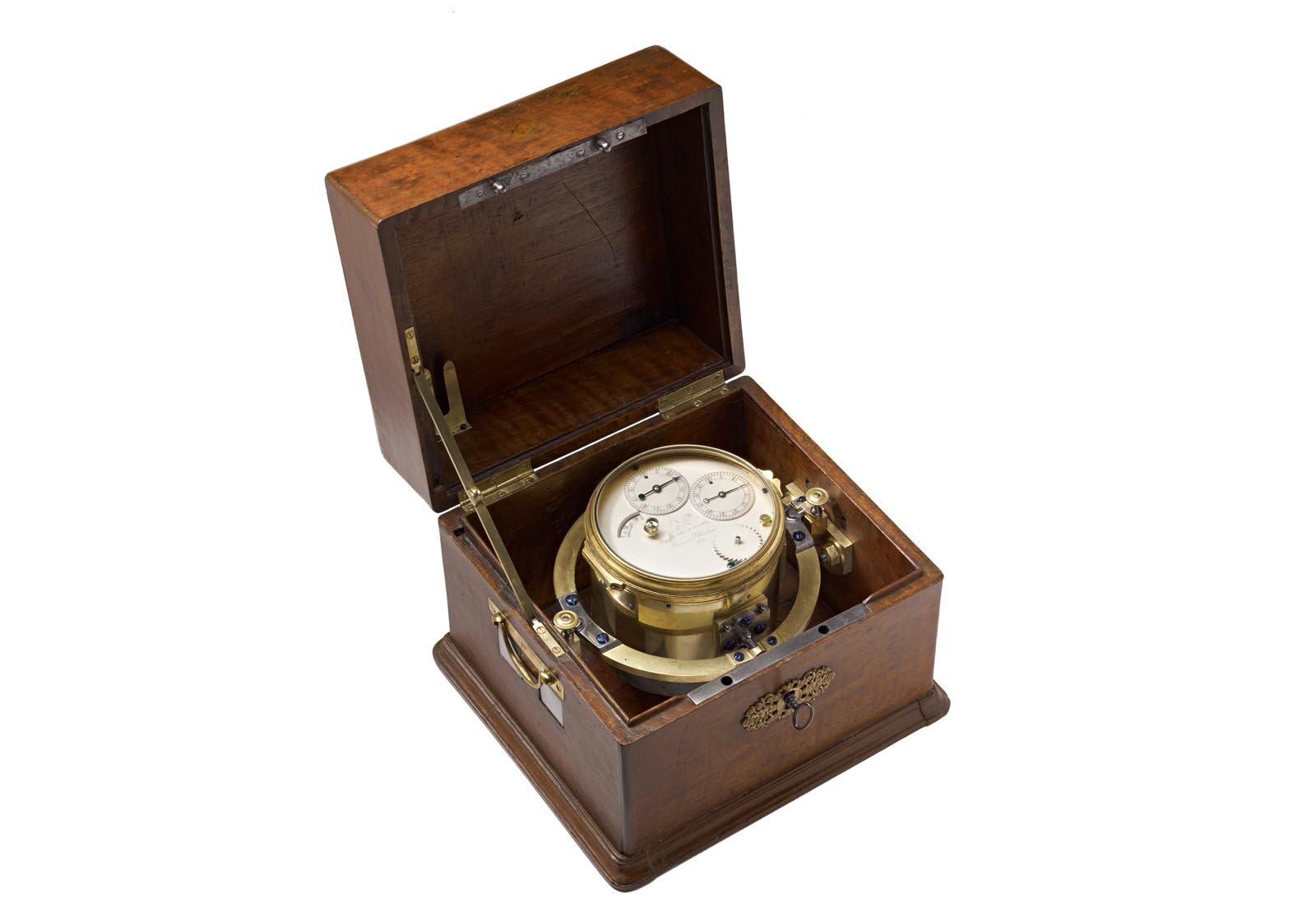 While John Harrison’s portable timekeepers – the most successful being the H4 with a verge escapement – no doubt laid the foundations of the marine chronometer, it was Berthoud and Le Roy who managed to build high-precision chronometers in meaningful numbers, with the latter having invented the detent escapement, which became the predominant escapement type in marine chronometers.

Much like many great watchmakers of his time, Berthoud’s accomplishments and inventions were diverse. Amongst other things, he was the first watchmaker to incorporate double balance wheels in a single movement.

Available in either rose or white gold, the FB 1 Oeuvre d’Or is a large 44 mm. And the unconventional case accentuates its perceived size because it stands out on the wrist.

But surprisingly, the watch isn’t as large as it looks or measures. Unlike conventional cases, the strap is attached within the case, rather than without via protruding lugs; this is done to maintain the unbroken outline of an octagon.

And at just 13 mm high, it is also surprisingly slim and elegant for a watch that contains various notoriously space-consuming mechanisms.

The cases in both metals are predominantly polished with a contrasting brushed, central lug. But unlike the original rose-gold model that had a contrasting, brushed black ceramic centre lug that blends into the black strap, the Oeuvre d’Or version has its inter-lug in the same metal as the case, which gives it a much more pronounced profile, creating a clear visual distinction from the strap.

One feature the rose gold Oeuvre d’Or shares with all the other version are the four sapphire panels in its flanks that provide a peek at crucial features of the movement, including the fusée and chain as well as the cone and feeler.

The white gold Oeuvre d’Or, on the other hand, features baguette-cut diamonds set into its case flanks – an appealingly discrete method of integrating a substantial number of diamonds into the case.

View of the barrel with the chain wrapped around it

The rose-gold version has its dial in the same material as the case, while the white-gold version is paired with a high-contrast, yellow-gold dial.

As such, the dial is more prominent on the white-gold watch, while the octagonal form appears more pronounced on the rose gold variant.

While different in colour, both dials have a frosted finish with engraved text, an element drawn from a Ferdinand Berthoud original, the astronomical pocket watch no. 3.

The dial text summarises the watch and brand’s hometown, reading “Ferdinand Berthoud – Chronométre – Val-de-Travers – Suisse,” followed by the individual limited-edition number as well as “Haut” and “Bas”, or “high” and “low”, for the power reserve

An elongated aperture down the centre of the dial reveals the tourbillon wheel as well as a seconds wheel that drives the central seconds hand directly.

The tourbillon wheel below, and the seconds wheel just above it

The most fascinating aspect of the FB 1 is the movement, which is exceptionally elaborate and old fashioned in construction, while also being extremely well decorated. Despite the brand being a subsidiary of a large company better known for its jewellery and gem-set watches, the FB 1 movement is the sort of no-expense-spared calibre one would instead expect from a madcap independent watchmaker.

To start with, it is constructed like an 18th and 19th century timepiece, with pillar-type architecture that was also typical of marine chronometers.

Essentially two large plates held together by pillars and sandwiching the moving parts, the roomy pillar construction was a practical solution in marine timekeepers as the parts were larger than in pocket or wristwatches. The pillar construction is almost extinct in modern watchmaking, save for Ferdinand Berthoud and another revived 19th century name, Moritz Grossmann of Germany.

Similarly, the bridges of the FB 1 movement are secured to the base plate with six titanium pillars, with all of its moving parts enclosed in between.

Notably, while prior versions the FB 1 had sapphire bridges or German silver bridges with a straight-grained finish, the Oeuvre d’Or is more precious – the bridges are 18k rose gold and hand-engraved with a repeating pyramid pattern.

Visually, the movement consists of three circles arranged in a triangle, separated by three bridges. The barrel and fusée are located at the top of the movement, and the oversized tourbillon sits below. All of these components are unusually large, explaining the size of the case.

The fusée and chain is a primitive form of constant force mechanism that dates back to the 15th century.

Like a remontoir, it equalises the uneven force of the mainspring as it unwinds, ensuring the precision of the watch as long as it is running. The mainspring barrel is wound by a fusée, a cone that sits on the arbor with a linked chain coiled around it and the barrel. 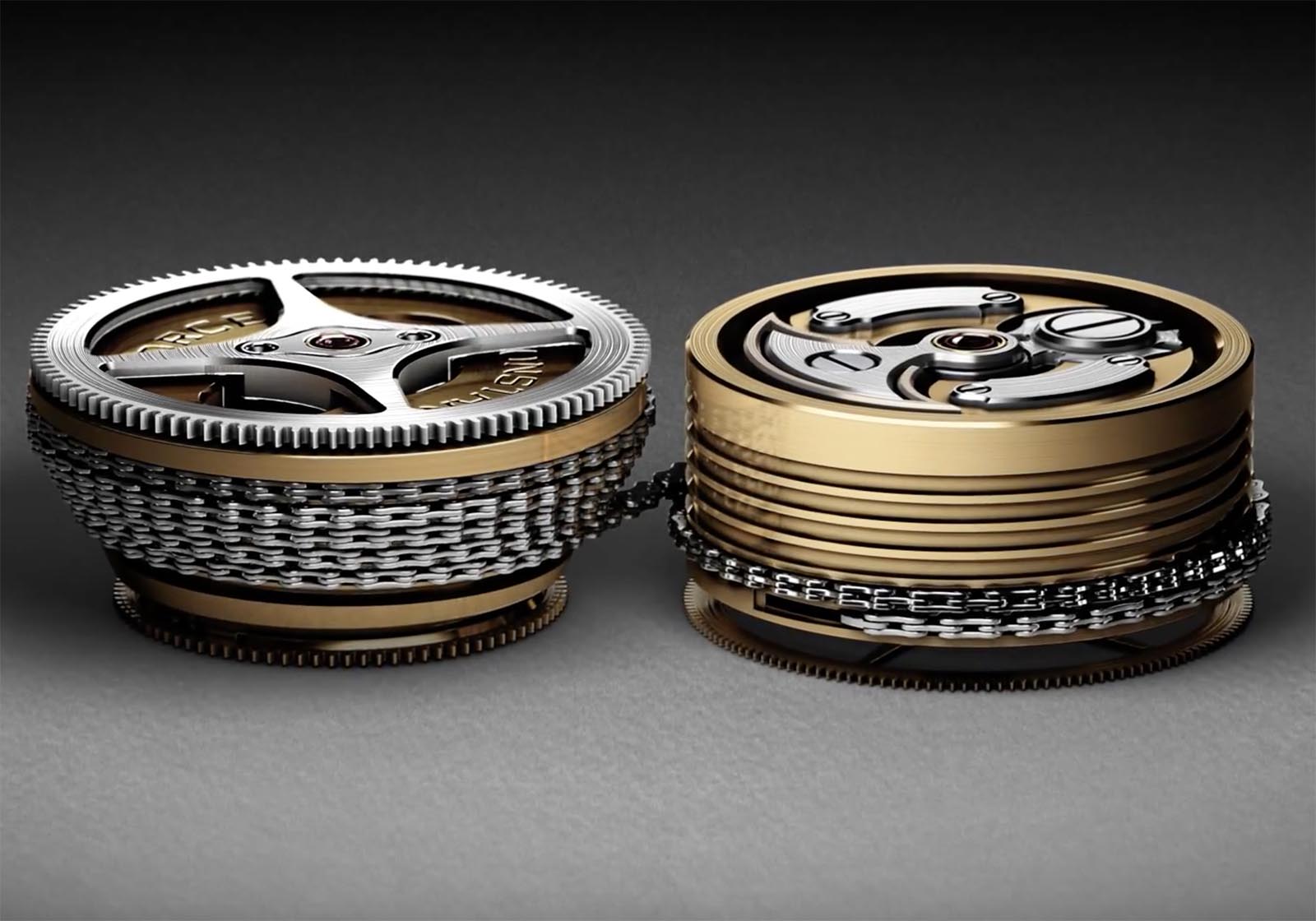 The fusée on the left and barrel on the right

In contrast to the standard fusée where the chain wraps about the barrel and the fusée in one direction, the FB 1 features a reverse fusee where the chain makes a figure “8” as it wraps around the two components.

In addition, the FB 1 movement employs a “hanging” or “floating” construction for the fusee, which was granted a patent. This helps reduce the height of the movement as the fusee is secured to the base plate only on one side, without an upper bridge on the other.

But as with all watches with a fusée and chain – the fusee occupies a generous amount of space – the movement offers a relatively short 53-hour power reserve since the barrel is necessarily compact.

Not only does it take up much of the real estate inside the watch, the fusée and chain mechanism is also notably complicated.

The barrel and the fusée are linked by a 28.5 cm long chain comprising 474 links, which contributes to a high part count of 1116 components. Mounted on the barrel cover is a stopwork Maltese cross that limits how much the chain wraps around the fusee at full wind, and also limits the mainspring from being too tightly wound.

Visible on the fusée cone are the differential planetary gears for the purpose of maintaining power while winding. This is necessary in a fusée mechanism because the movement stops when it is being wound as the fusée rotates in one direction during winding and in the reverse direction when the watch is running.

Another complex bit of the movement, however, is almost all hidden. Sitting below the barrel and hidden below the bridge is a cone and feeler mechanism for the power reserve, an old school feature that George Daniels himself was fond of.

As opposed to the more common differential system that relies on a planetary gear, this features a cone with a ruby-tipped feeler arm. The cone is driven up and down by a screw linked to the barrel – a system which itself acts as a differential gear system. It is accompanied by a spring-loaded feeler arm that measures the motion of the cone and transmits the state of wind to the power reserve hand.

The cone and feeler are somewhere underneath

The easiest bit of the movement to comprehend is the tourbillon cage, held in place by an arrow-shaped bridge and containing a free-sprung balance running at 3 Hz.

The cage has a traditional three-arm construction which ensures that its weight is evenly distributed. And it also features two gold weights across from the escapement for poising – to balance out the weight of the escapement.

Given all of the effort put into the construction, it is practically a given that the decoration is equally accomplished.

The movement is strikingly finished with different surface decorations and many sharp outward angles on bridges and assorted steel parts.

Take for instance the barrel and its associated parts, ordinarily a straightforward bit of a movement. Here the steel stopwork and Maltese cross are elaborately decorated with a brushed finish on their top surfaces, which contrasts against the gilt-frosted finish on the barrel itself. The edges of the steel parts are also polished and bevelled, with two sharp inward angles on the bridge for the stopwork.

Similarly well executed is the three-armed tourbillon carriage that is slim and gracefully shaped with its centre forming a stylised triangle with pointed edges. Ditto for the tourbillon cock that is brushed on top, and outlined by polished bevels that include two inward corners and one sharp outward point.

The FB 1 is COSC-certified, but the certification feels redundant. It is obvious that the brand is all about timekeeping – achieved through methods that are elaborate to the extreme and superfluous with modern technology. The appeal of the watch lies in its masterful execution and adaptation of old-school methods.

Though the combination of a fusée and chain with the tourbillon is not new – close equivalents are the Richard Lange Tourbillon “Pour le Mérite” and the Breguet Tradition 7047 – the FB 1 differs completely in terms of execution, construction and design.

Regardless of the iteration, the FB 1 is technically accomplished – though you have to like the unconventional case shape to truly appreciate it. The beautiful architecture and finishing of the movement almost transcends its dial-side aesthetics and pursuit of chronometry.

But with that said, in contrast to all earlier iterations, which had a more modern, industrial look, the Oeuvre d’Or, especially in pink gold, is one of the most striking and harmonious versions.

The Oeuvre d’Or does cost a small fortune – the pink gold is about US$260,000 – but compared to rivals the price is reasonable. It does more for about the same cost.

And relative to the resources that have been put into developing the movement – which is produced on a minuscule scale – the price tag is more than fair.

Jazzed up with sapphire bridges inside and a titanium case.