When it comes to finely-finished, time-only movements, the ultimate Seiko offerings are the Credor Eichi II and Grand Seiko Spring Drive 20th Anniversary. The Japanese equivalent of watches like the Akrivia Chronometre Contemporain and Philippe Dufour Simplicity, the pair are the work of the Micro Artist Studio and finished to the same magnificent level, broadly speaking. (The Grand Seiko 8 Day is of the same quality, but it is a much larger and more complex watch.)

Because the movements, the 7R14 in the Eichi II and 9R02 in Grand Seiko SBGZ001 and SBGZ003, are fundamentally identical, comparing the finer details of the two – an enlightened, obsessive nitpicking – makes for some interesting conclusions.

The sampled are both finished examples that were purchased in stores, and not prototypes, so both are representative of their respective model and movement. Though both were made in the Seiko-Epson’s Micro Artist Studio, probably by the very same craftsmen, the Eichi II was produced in 2015, while the Grand Seiko SBGZ001 dates to 2019, which is the year of its launch, and is the property of Mark Cho, founder of menswear retailer The Armoury.

Both movements share the same architecture and layout, with the key functional difference being the power reserve, in both duration and display. The Eichi II’s 7R14 has a single barrel and a 60-hour power reserve, indicated on a fan-shaped scale, while the Grand Seiko 9R02 has twin, stacked barrels for a power reserve of 84 hours shown on a circular indicator.

And as a side note: despite the difference in the mainsprings, both share the same Torque Return System originally devised for the first-generation Eichi. When it is almost fully wound, and as a result produces producing more energy than is needed to run the watch, the system recycles the excess energy by using it to rewind the mainspring.

That aside, the movements are fundamentally identical, and as a result, they look similar. Nearly all of the important components – including the barrels, screws for the bridges, end stones for the fly wheel – are in the same position across the two movements.

Both calibres are Spring Drive, so they are distinctly more high tech than the typical high horology watch movement. A patented Seiko invention, Spring Drive is a mechanical movement combined with a hybrid regulator – a mechanical flywheel regulated by an electronic brain. As a result, both movements run within a second a day.

But ingenious as it is, Spring Drive is neither new nor rare. It was invented in 1977, made its market debut in 1999, and is now widely used in a variety of watches, ranging from the inexpensive to the top-of-the-line creations from the Micro Artist Studio.

As a result, it is not the tech within each movement that is compelling. Instead, what makes them truly special is the finishing, which is easily equal to the very best in Swiss watchmaking. In fact, mastery of traditional decorative techniques was one of the factors behind the establishment of the Micro Artist Studio in 2000.

Intriguingly, while the decoration of both movements is comparable in style and technique – they are made in the same workshop – the finer details differ between the two.

One of the more obvious differences between the two movements are the barrels. Both are a similar open-worked decoration of a stylised bellflower, an official symbol of Shiojiri, the town in Nagano prefecture that is home to the facility that contains the Micro Artist Studio. For that reason, a stylised bellflower is also the logo of the Micro Artist Studio, which is found on both movements. 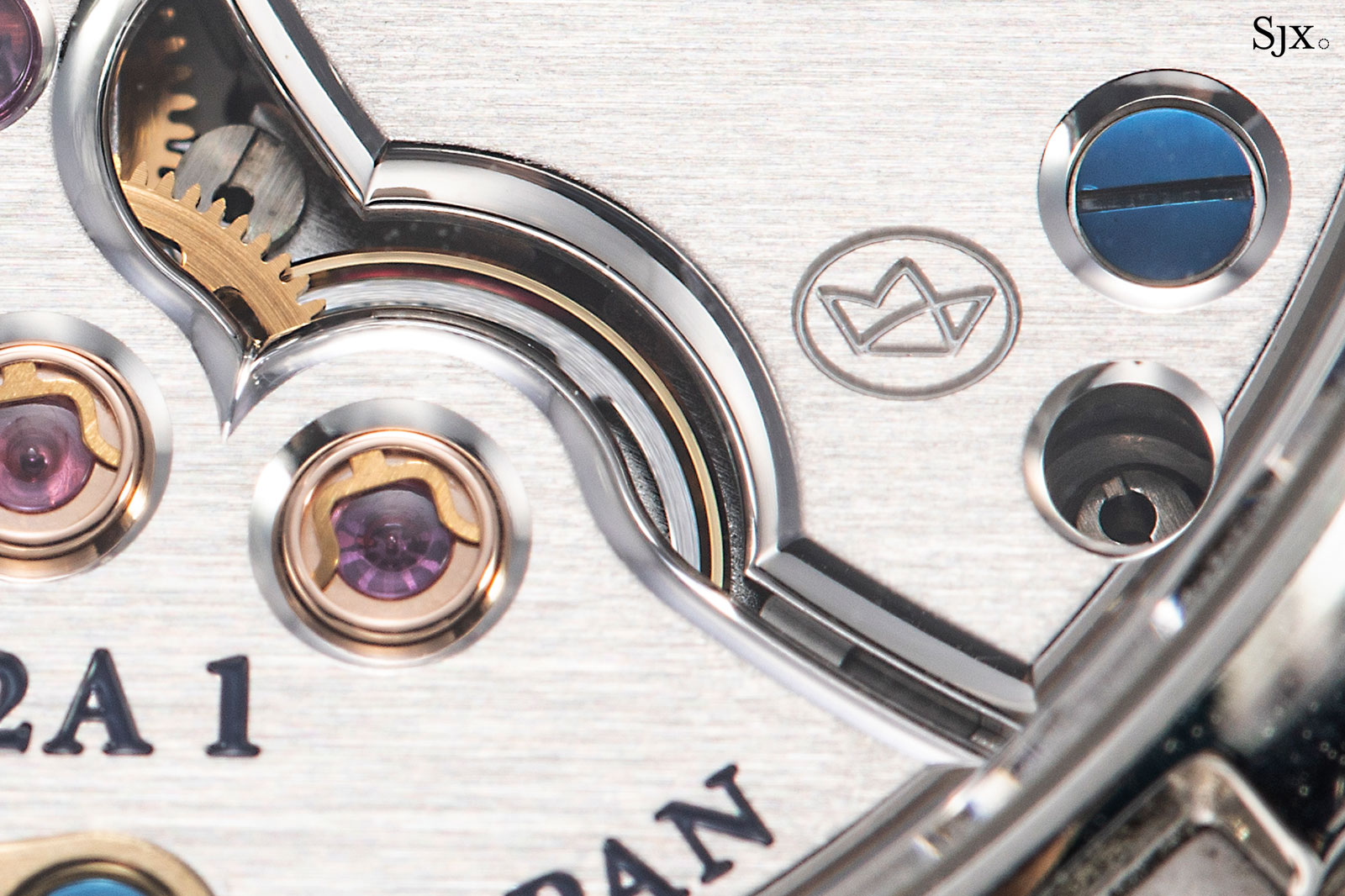 The bellflower emblem of the Micro Artist Studio

The polished bevels on the edges of the bellflower motif are wider and rounder on the Grand Seiko 9R02 movement, which also has a polished, bowl-shaped countersink for its barrel screw. And the bevelling on the barrel of the 9R02 is perfect, while that on the 7R14 reveals minuscule striations.

The open-worked barrel of the 7R14 in the Eichi II

And the same in the Grand Seiko 9R02

And because the Grand Seiko 9R02 has twin, stacked mainsprings, its barrel is notably higher than that of the 7R14. In fact, while the barrel of the 7R14 sits almost flush with the bridges, the barrel in the 9R02 rises above the bridges.

The height of the barrel in the 9R02 allows its outer edge to boast a generous, rounded bevel that is mirror finished, an extravagant detail on a component that is usually plainly finished.

Additionally, the tiny section of the base plate that’s visible on both movements, located in between the barrel and the case back, is marginally better finished on the 9R02, sporting a polished bevel that is wider and more rounded.

7R14; the visible section of the base plate is located at the top-centre of the image

Both movements have bridges of rhodium-plated brass, by and large the standard for mechanical watches. The bridges are superficially similar, with a fine straight graining on the top surfaces and lustrous polished bevels along all the edges – the house style of the Micro Artist Studio. But there are obvious aesthetic differences in the design of the decoration, and less obvious ones in the execution.

Most prominent is the aesthetic flourish incorporated into the Grand Seiko 9R02. The pair of end stones with shock absorber springs – symboling the eyes of a frog looking at the Moon according to Seiko lore – are highlighted by a deep and acute inward angle, often considered one of the distinguishing features of a truly high-end, hand-finished movement. Of all the improvements found in the 9R02 versus the 7R14, this is arguably the most substantial.

And the 9R02 with the inward angle

Up close, it becomes obvious that the finishing on the Grand Seiko 9R02 was even designed to to be slightly more elaborate even on an extremely subtle level.

That can be discerned from the bevelling of the bridges: they are more fully rounded on the 9R02, which also boasts more concavity in the bowl-shaped countersinks. So minute are the differences that they are barely noticeable, and only given away by the way light and shadow reflect on the polished bevels or countersinks.

But even though the decoration of the 9R02 might have been designed to be more elaborate, the execution is cleaner, neater, and more consistent on the 7R14.

The edge separating the polished bevels from the straight-grained top surface, for instance, is sharply defined on the 7R14, but slightly fuzzy on the 9R02. And the same goes for the border separating the countersinks and straight graining.

A well-defined border on the 7R14

It is obvious that the 9R02 has been designed to have more elaborate decoration, as it should, since the Grand Seiko SBGZ003 costs about 5% more than the Eichi II. But while the 9R02 is better finished in many respects, there are also details that are better executed in the 7R14.

Short of having been at the bench during production, the specific reasons behind the differences is impossible to determine, or if they are actually within acceptable tolerances. In fact, the divergence between the two is small enough that it is probably within the acceptable range of variation.

Still, one can speculate. A likely explanation is simply the intrinsic nature of hand finishing, which inevitably leads to slight inconsistencies. A less kind explanation could be the increased output of the Micro Artist Studio stemming from the commercial success of its artisan timepieces.

But that is nitpicking. Whatever the minor differences are, the 7R14 and 9R02 are clearly amongst the best-finished movements on the market today. They are so good that both movements are unquestionably in the same class as the Voutilainen cal. 28, Akrivia RR-01, and of course the Dufour Simplicity.