Released in 2014 to critical and commercial success, Interstellar tells the story of a Joseph Cooper, an astronaut recruited to save humanity by travelling through wormholes to seek new, habitable worlds. He’s played by Matthew McConaughey, while Jessica Chastain takes the role of Murphy, his daughter. A key scene in the film has Cooper communicating across space and time with Murphy via the seconds hand of her wristwatch, which jumps in Morse code.

The wristwatch prop was a custom Hamilton, but it took the brand five years to take advantage of the big screen opportunity – though Hamilton did recruit the movie’s production designer to create a sci-fi wristwatch – with the Khaki Field Murph finally launching last year.

Though based on the standard Khaki Field Auto 42 mm, the Murph edition is notably different. To start with, it has a retro look with faux-vintage luminous markings and cathedral hands.

And perhaps more importantly for the aficionado, the Murph has no date function; in fact, it is the only automatic model in the Khaki Field line without a date (the other models sans date are all hand-wind). In short, the Murph is a good-looking, military-style watch for relatively little money.

The dial of the Murph is surprisingly well conceived for an inexpensive watch. The layout is balanced and well proportioned, with both hands being just the right length.

Because the Super-Luminova used is a dark parchment, the dial has strong vintage aspirations that don’t quite match the case, but the overall look remains attractive.

More tellingly, the slightly retro typography for the numerals is well suited to the design – the numerals for the minute track use a serif font, while the hour markers have an open “6” and “9”. That indicates a strong attention to detail, surprising given this watch is not a remake of a specific vintage watch, but a new design conceived for the movie.

The only detail that references the movie is a subtle and clever addition to the seconds hand: tiny lines and dots in Super-Luminova on the seconds hand that spell out “Eureka” in Morse code.

At 42 mm wide and 11 mm in diameter, the case is large but feels a bit bigger than it is. That’s because the dial is fairly wide, the bezel narrow, and the case thin relative to the diameter.

But the size is well suited to the design; the watch looks and feels like an slightly oversized, military-inspired timepiece on the wrist, which is it.

In terms of quality that case holds no surprises. It is of similar fit and finish to other watches in this price category, meaning simply constructed and finished but robust and functional.

The same can be said for the movement, but it is revealed all in all its glory through a display back. Unfortunately there’s not much to see, although the movement is well equipped for an entry-level watch.

Hamilton labels it the H-10, though it is actually an ETA C07.111. Part of the C07 family of movements that ETA sells only to its sister companies within the Swatch Group, the C07.111 is a heavily upgraded ETA 2824 that is also used by Tissot and Certina as the Powermatic 80.

Amongst the most obvious improvements is the 80-hour power reserve, compared to just 38 hours in the basic ETA 2824. That’s achieved in part by reducing the frequency of the balance to 3 Hz (the standard 2824 runs at 4 Hz), and also installing a synthetic escapement that has the pallet fork and escape wheel made of a hard plastic that is self-lubricating.

Notably, the movement also has a patented, free-sprung balance wheel that has two weights on its rim for regulation, a feature usually associated with high-end movements but here designed to be easy to operate and adjust with a specialised tool.

While the H-10 specs are admirable in a watch under US$1,000, no effort has been made to dress up the movement. So what you see through the porthole is raw and industrial. In short, it’s a substantial amount of tech for the money, but not so much beauty.

Interstellar backstory aside, the Khaki Field Murph Auto is a solid watch that is good value. It is also fairly priced in relation to other affordable watches: it’s a step up from a Tissot in terms of fit and finish, not as well done as a basic Longines, and priced exactly in between the two.

Availability: From Hamilton boutiques and retailers
Price: US$995, or 1,390 Singapore dollars

The great-value military reissue just got even better.

A fascinating video on Hamilton in its heyday 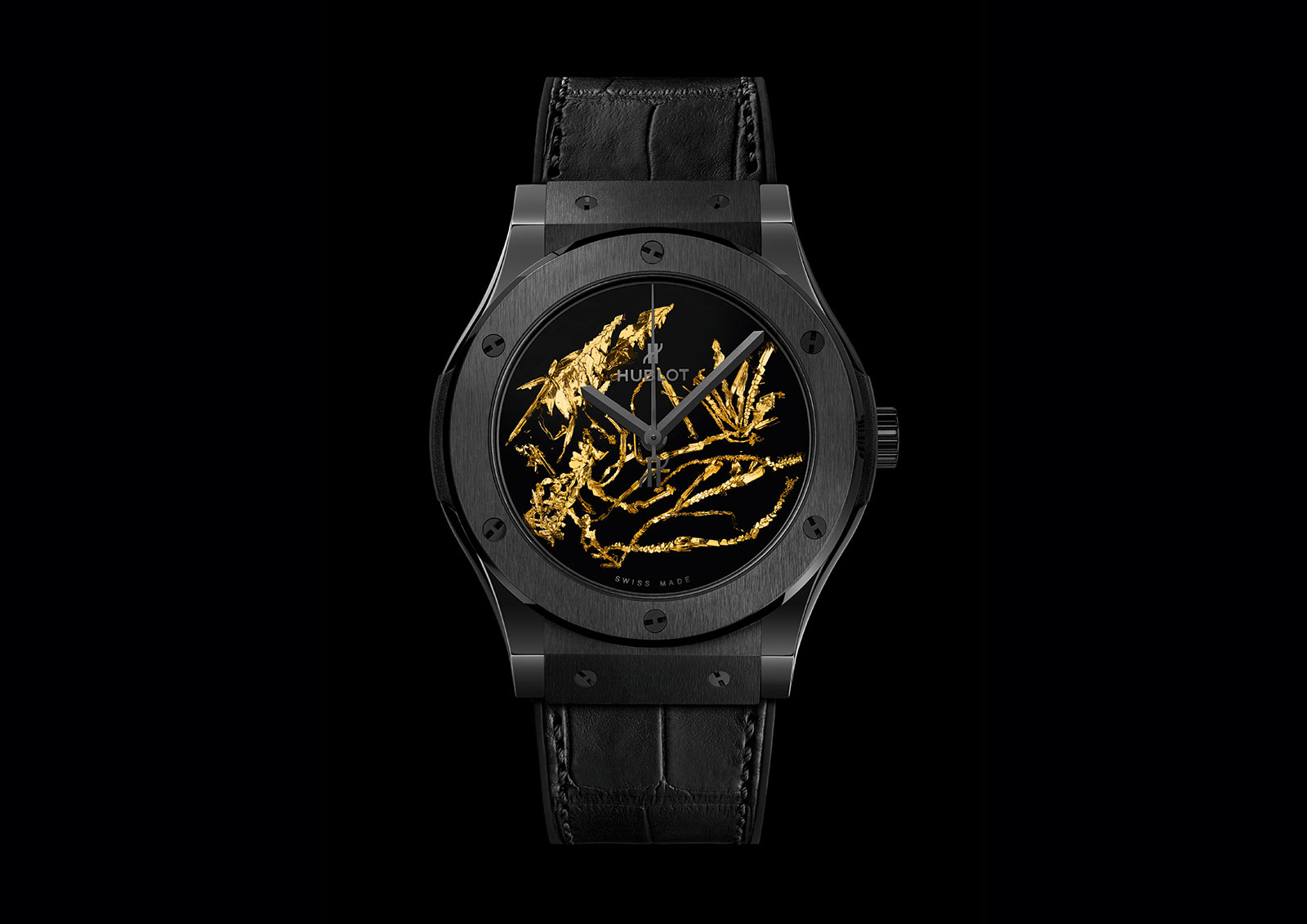 As a brand known for oversized and aggressively technical watches, Hublot’s latest creation is unusually delicate and intricate. The Classic Fusion Gold Crystal is an all-black wristwatch with a striking gold-patterned dial that has surprising beauty on a small scale.

Reminiscent of fossilised plants, the motif on the dial is actually solid gold, formed by vaporising the precious metal, revisiting an idea Hublot first mooted in 2017 with the experimental Gold Crystal watch that relied on gold from rivers around Geneva.

According to Hublot, the technique to create the decoration was developed in-house and starts with a tiny amount of pure, 24-carat gold. The metal is heated to its melting point, and then heated some more, creating a vapour-like stream of gold. 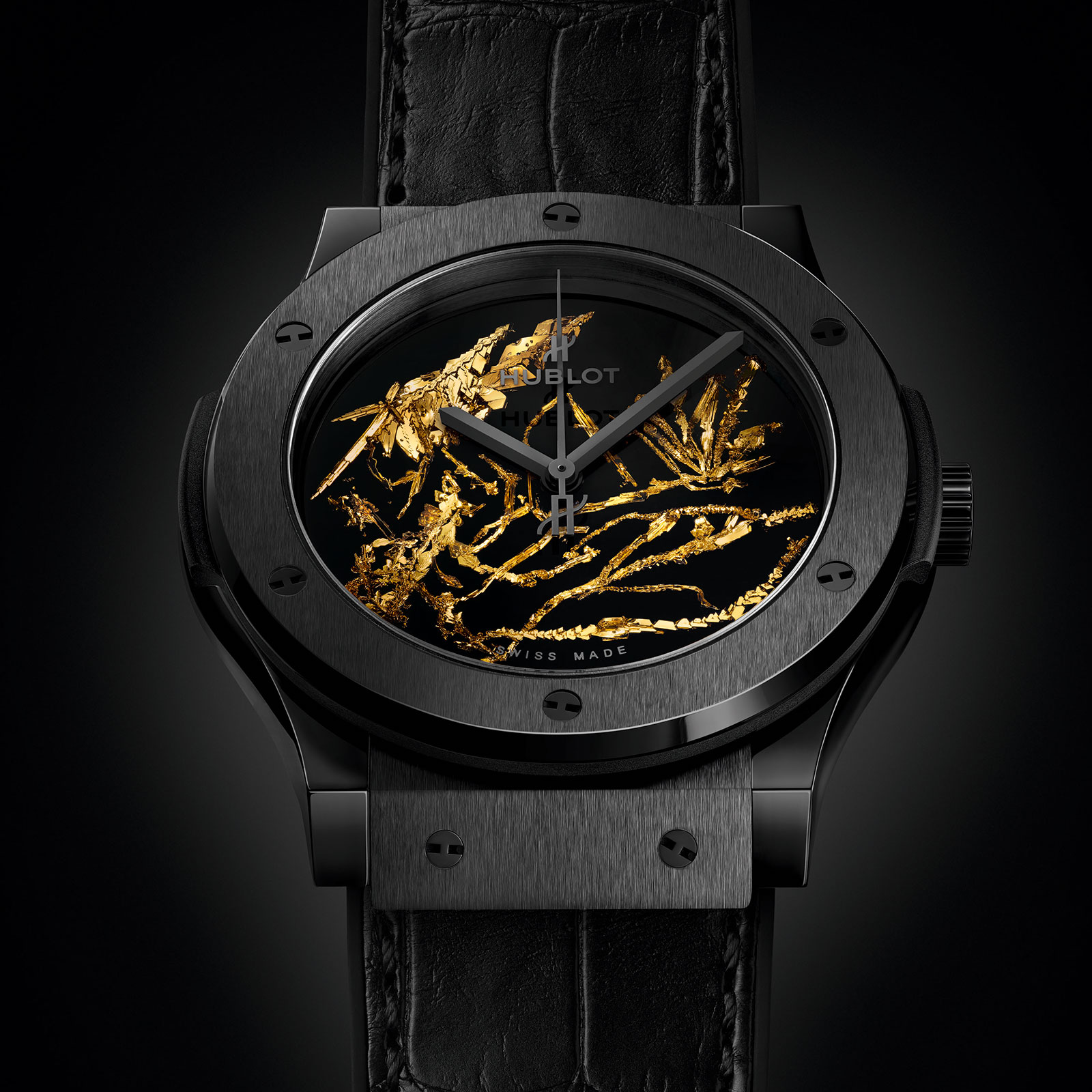 The tiny gold particles are then channelled to a cold metal plate, causing them to cool instantaneously, which form what Hublot terms “gold crystals”. These tiny pieces of gold are them sorted for size and shape, with only 20% suited for use on a watch dial, according to Hublot. 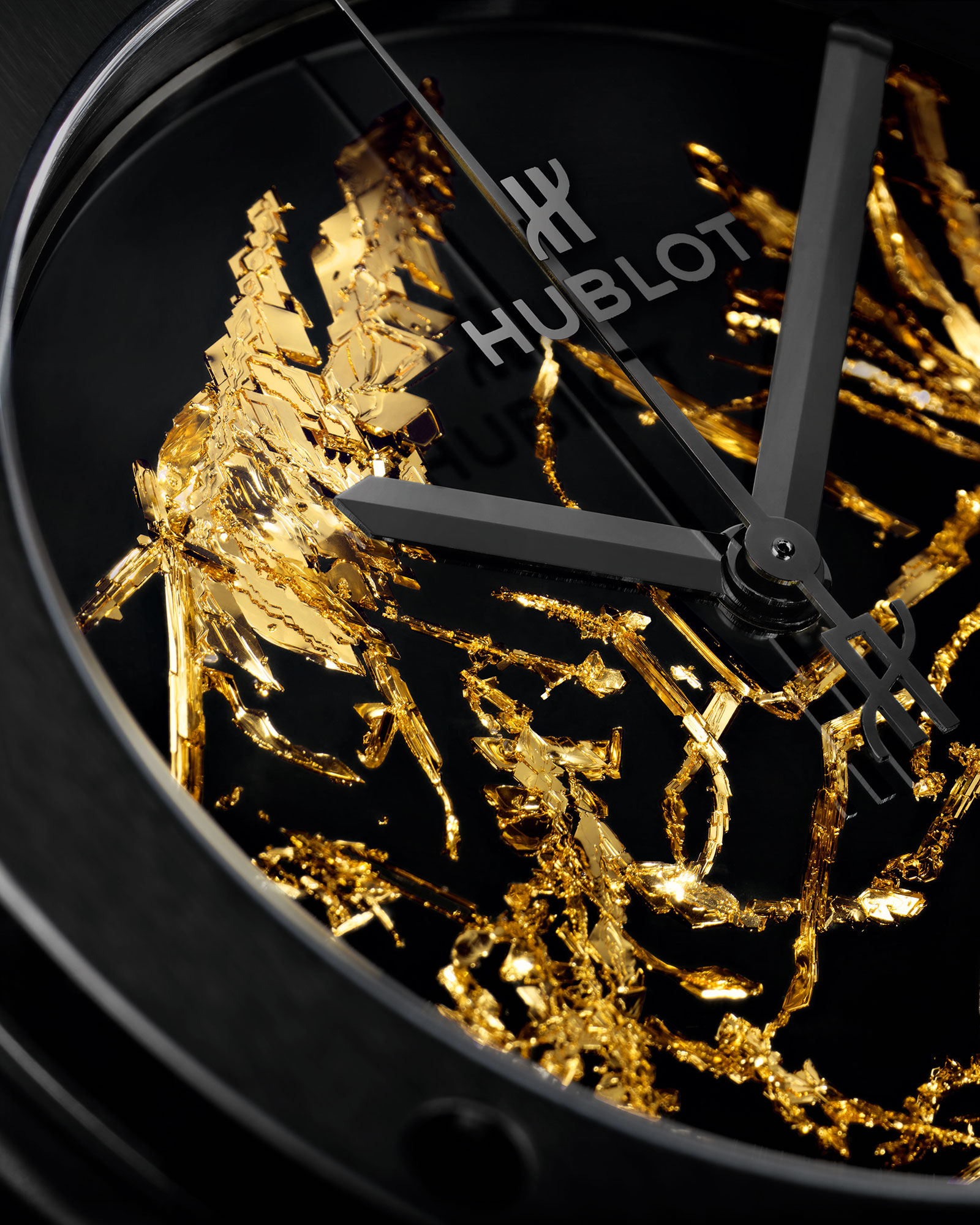 The resulting pieces are then arranged by hand on a black dial, which is then covered with a transparent lacquer – in a vacuum so as to prevent bubbles forming – and then baked in an oven to set the lacquer. 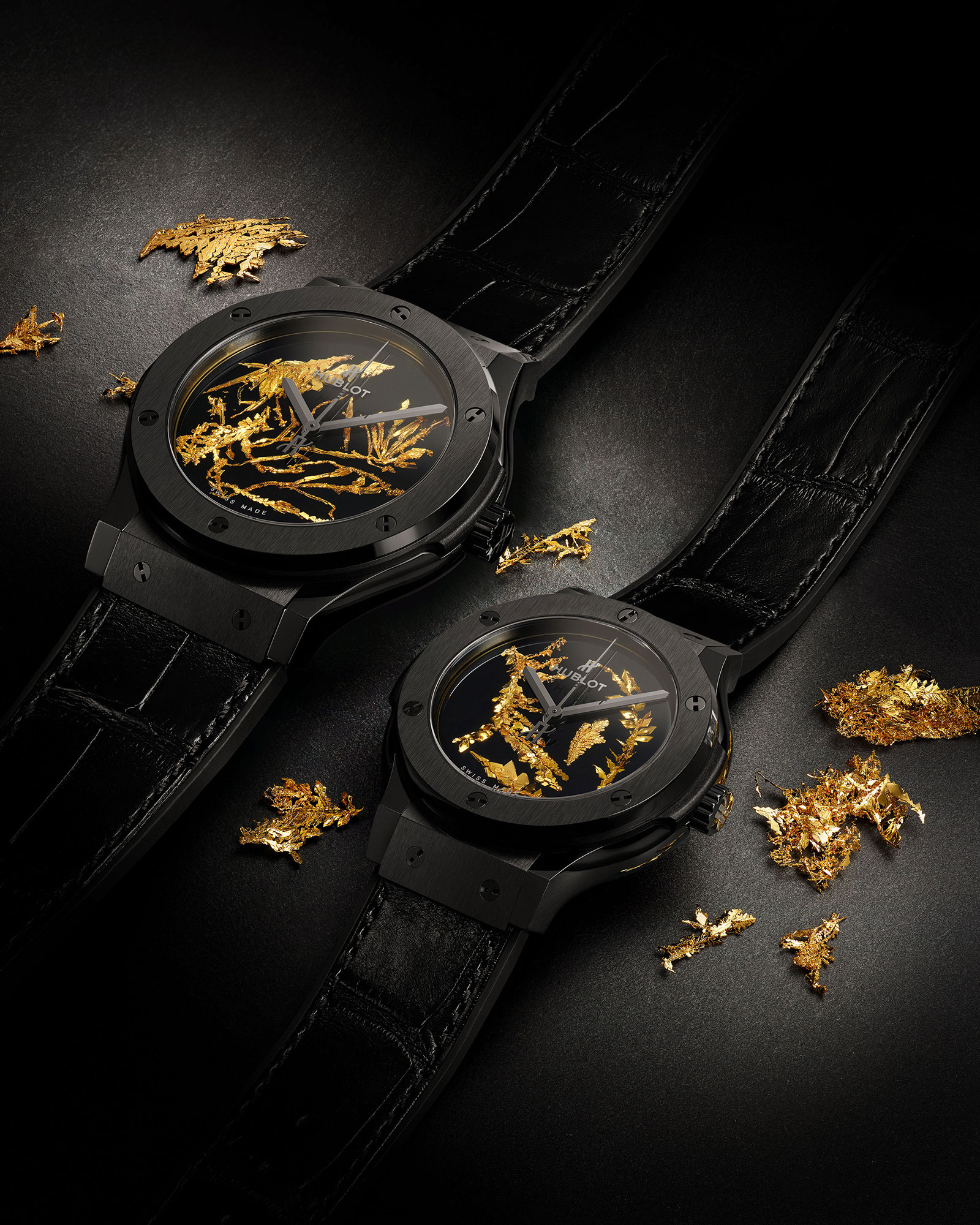 The rest of the watch is basically a monochromatic canvas for the gold crystal decor. It’s a stock Classic Fusion in black ceramic – the case, bezel, and back are black ceramic, while the screws are black-coated titanium. Available in two sizes, 38 mm and 45 mm, the watch is powered by the HUB1112, an automatic movement that’s a rebadged Sellita SW300-1.

Berluti Venezia Scritto leather on the dial and strap.