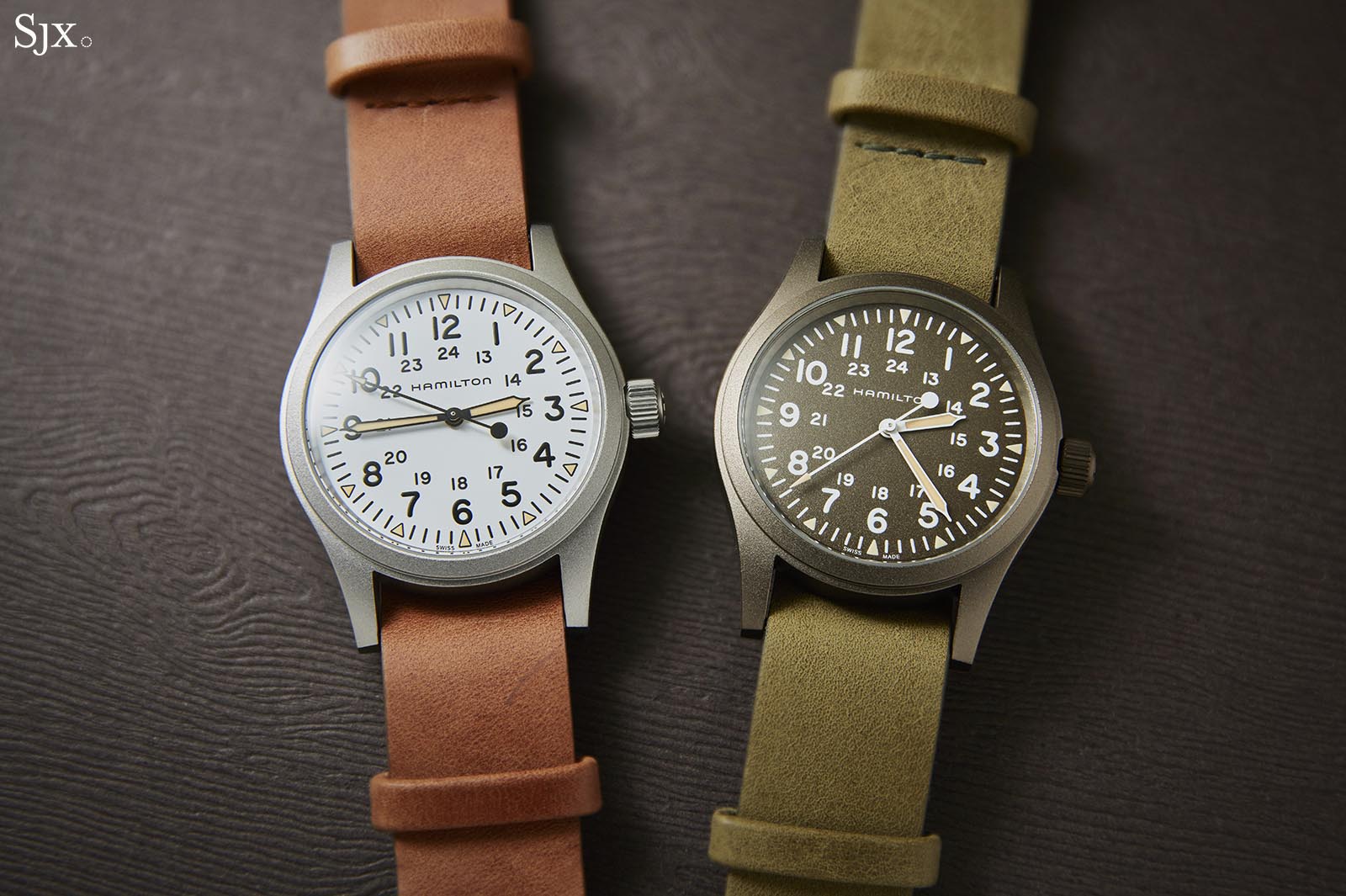 In late 2017, Hamilton hit a home run with an outstanding vintage-inspired watch for under US$500 – the Khaki Field Mechanical. It was modelled on a no-frills watch issued to the US army personnel during the Vietnam War. This year, the brand expanded the collection to include three new iterations powered by an upgraded movement.

Faithful to the original mil-spec watch, the Khaki Field Mechanical is the first model in over two decades to be powered by a hand-wound movement. Not only is it one of the most affordable Swiss-made hand-wound watches on the market, it also makes no concessions design-wise; the watch has a true-to-original dial without a date, a compact, 38mm case, and now, a new movement with an extended power reserve. 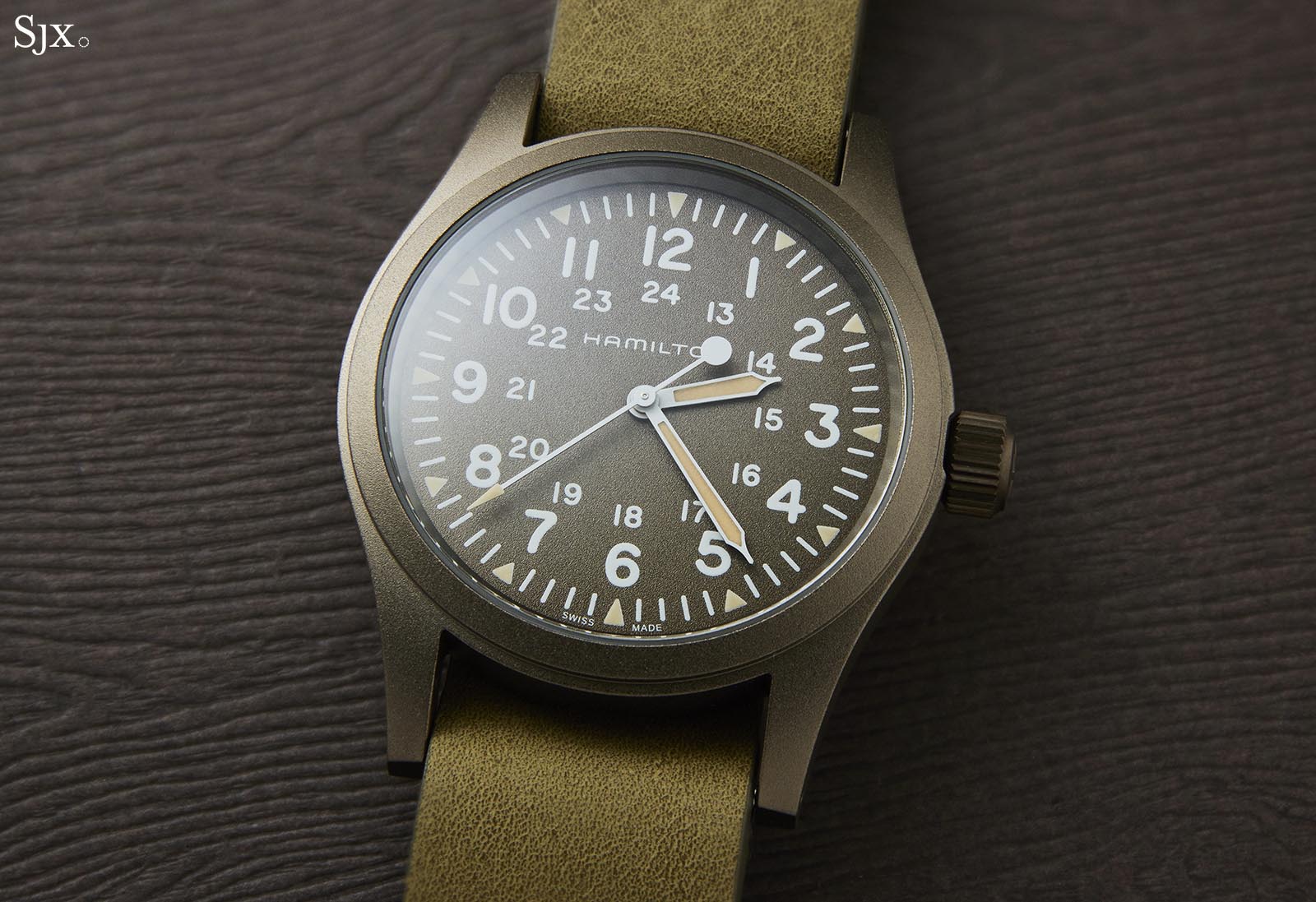 As with last year’s model, the new Khaki Field Mechanical is inspired by a watch produced for the US military from 1969 to the 1980s. Officially known as the FAPD 5101 or Type 1 Navigator, it was also nicknamed the “GI” after American troops,  and was notable for its hacking function, where the seconds hand stops when the crown is pulled out.

Several other American watchmakers produced the FAPD 5101 for the American forces, including Benrus, Westclox, Belforte, and Timex. Made to be cheap and expendable, they were produced with either plastic or metal cases.

The FAPD 5101 had a sterile black dial with triangle hour markers, along with 12- and 24-hour scales – a look that conformed to the MIL-W-46374 standard set forth by the US Department of Defence in 1964; that specification, in turn, evolved from the MIL-W-3818B of 1962. Subsequently, many improvements and tweaks were made but the basic design persisted. Up until the advent of quartz watches, they typically had a hand-wound, 17-jewel, centre seconds movement with a hacking function.

Both case types have a sandblasted matte finish and are topped by sapphire crystals. The diameter is 38mm, an agreeable, even small size today but is comparatively large to the tiny and unobtrusive originals. 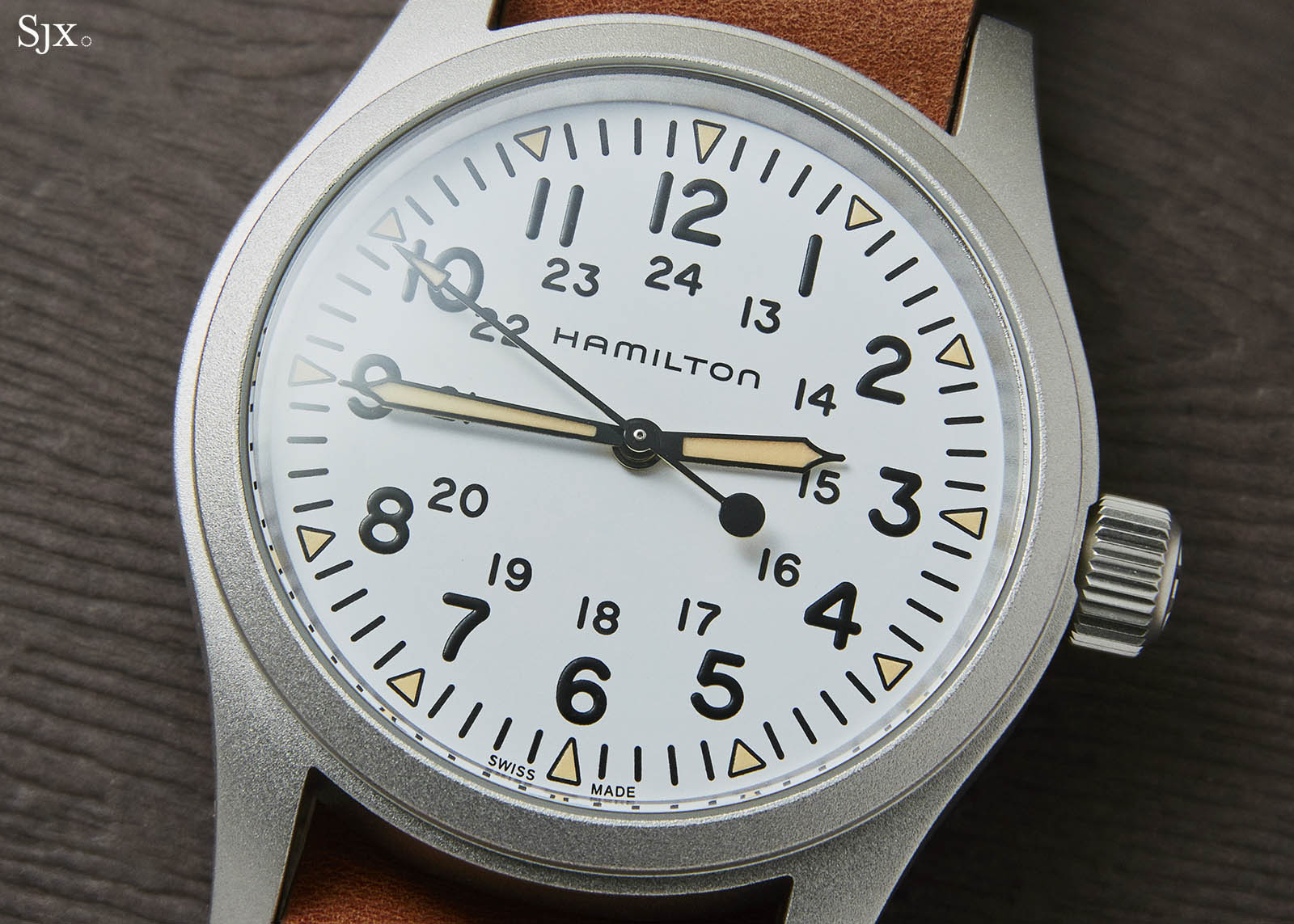 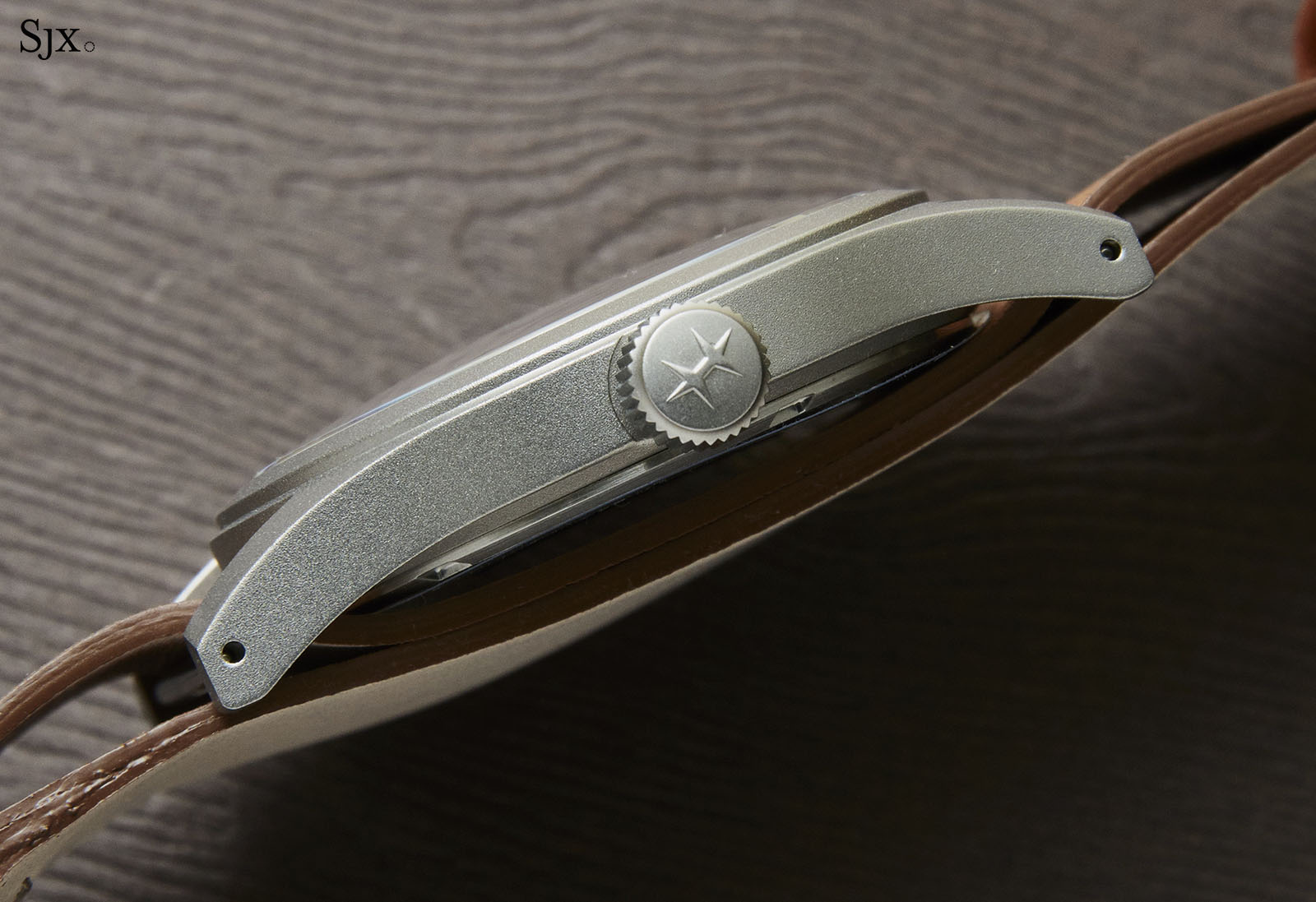 The dials of the new watches remain identical to the earlier version, featuring twin hour tracks and triangular markers. The hands and triangle markers are coated with sand-coloured Super-Luminova, which presents a rather unusual combination on the white dial as retro remakes are rarely executed with white dials. 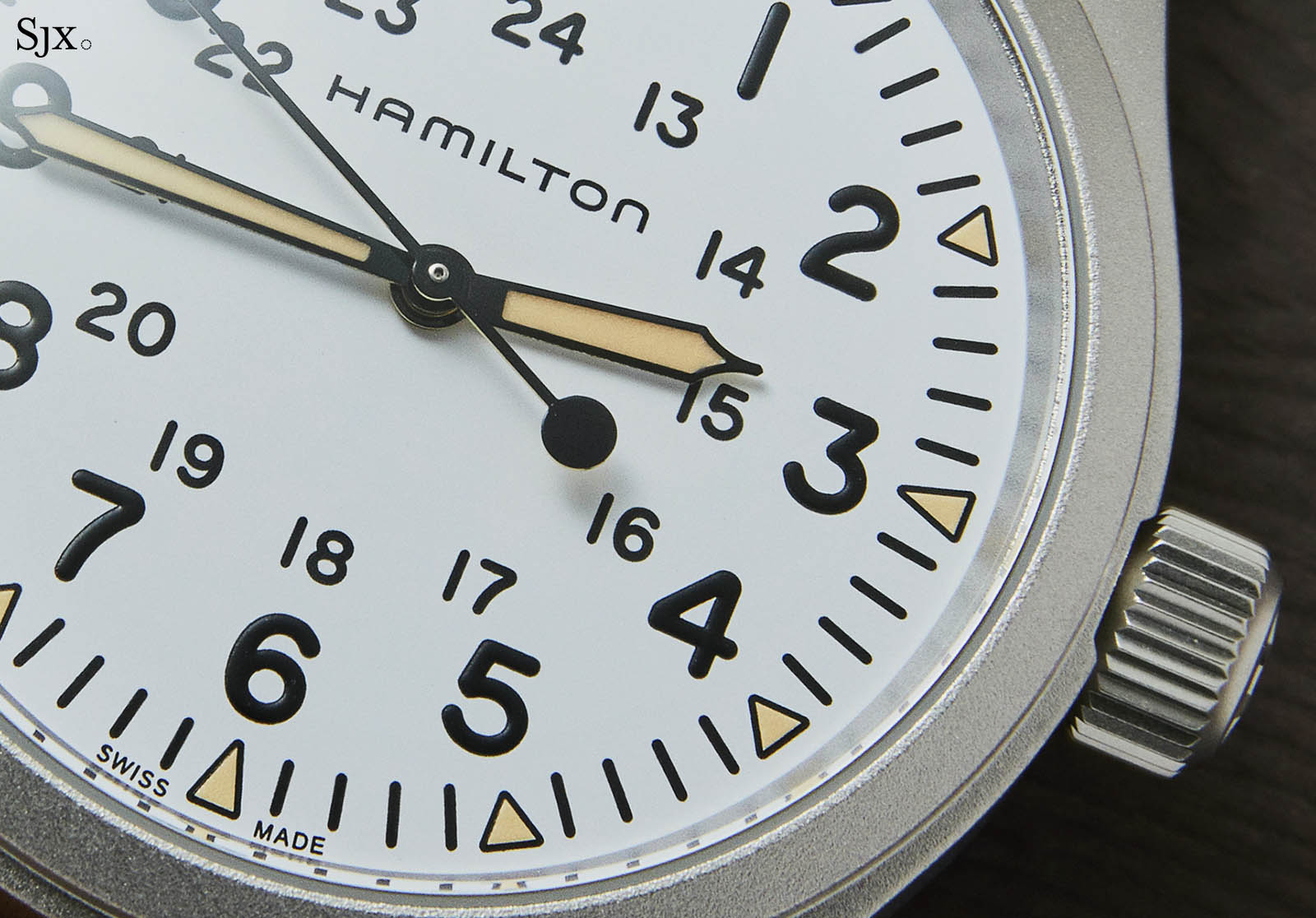 The most attractive version is undeniably the one with the green PVD-coated case as it offers a less technical, and consequently less common look. In fact, it brings to mind aged bronze, but with a stable, unchanging appearance that forgoes the dramatic oxidisation of bronze. 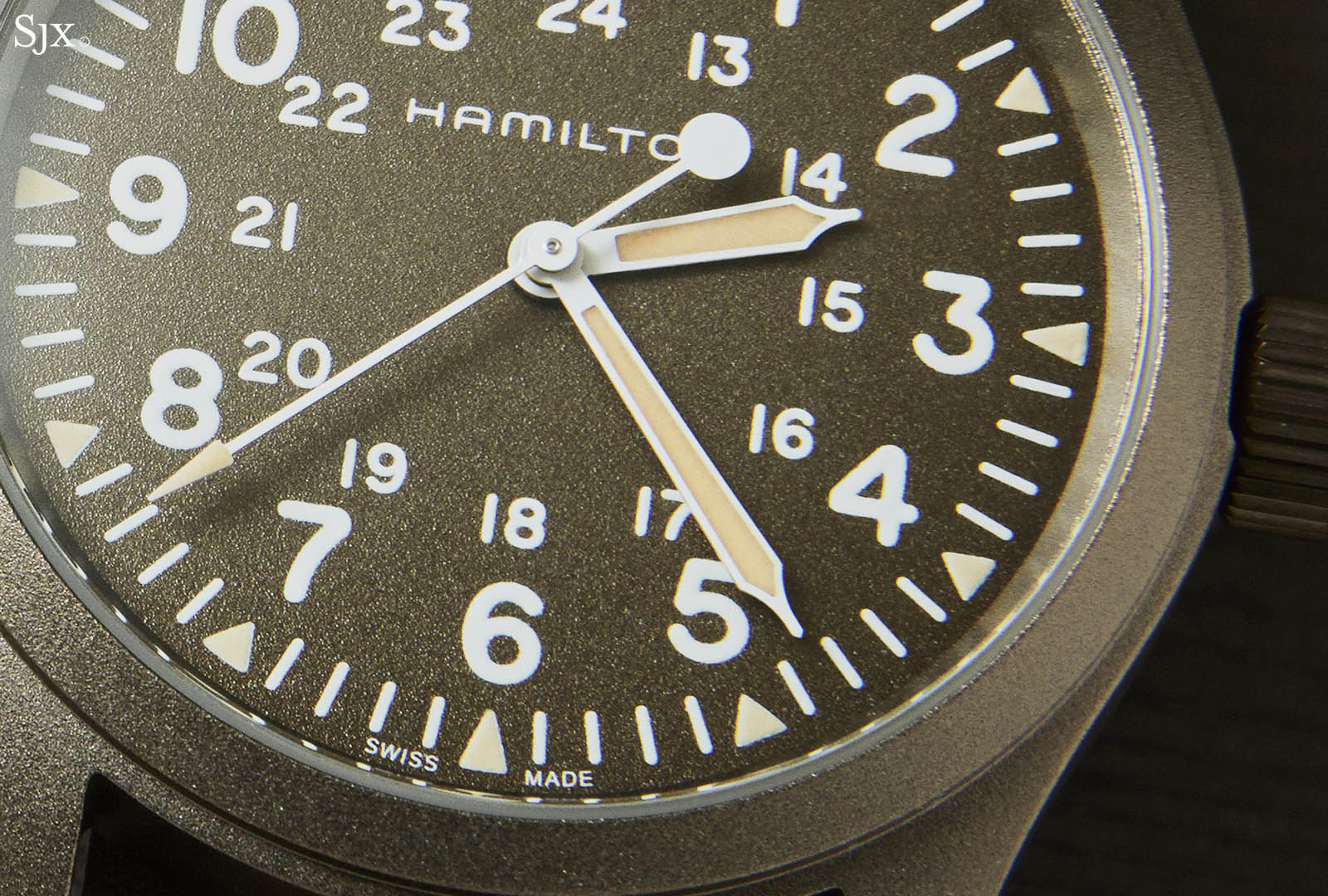 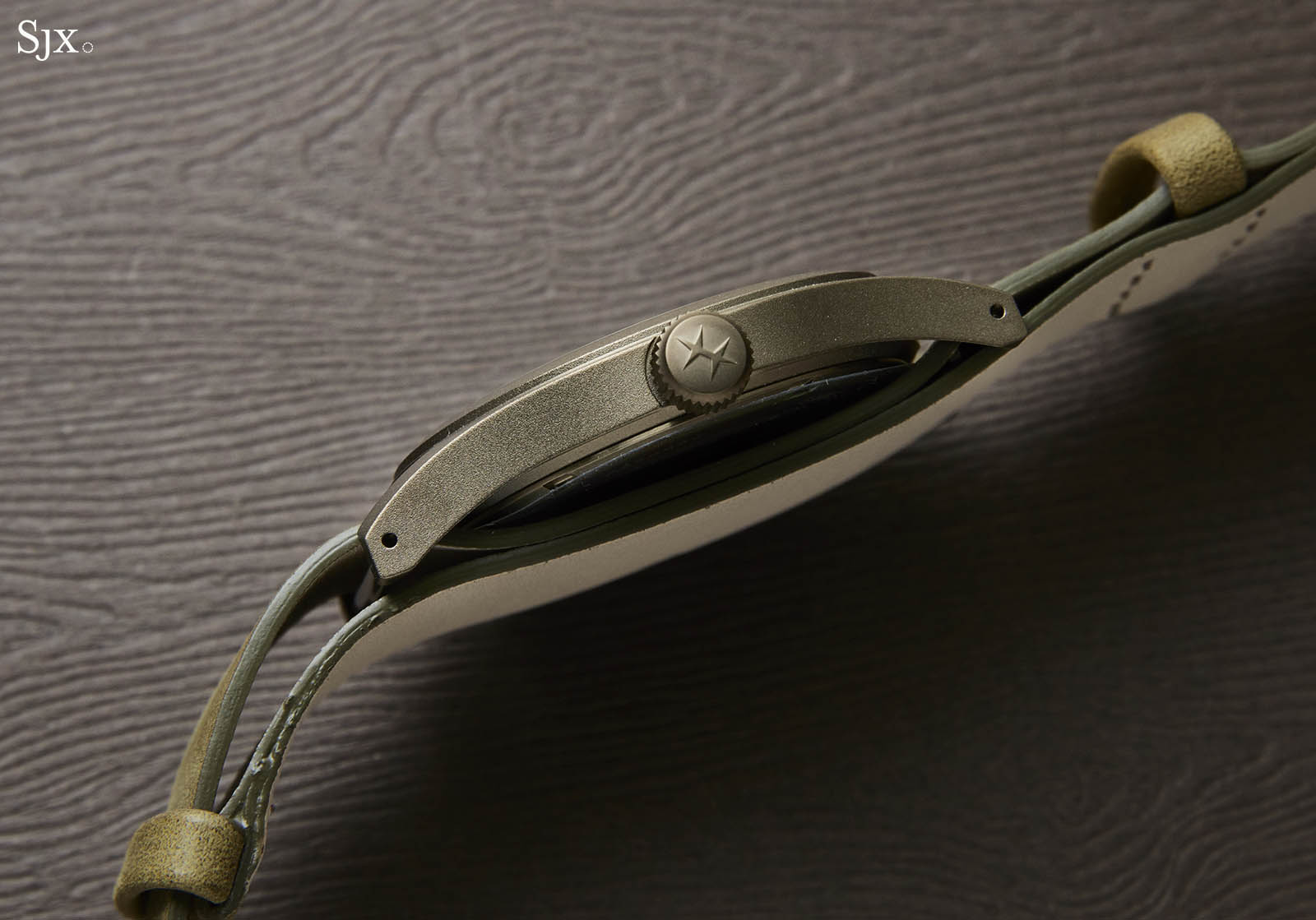 But the major improvement lies under the hood. While the 2018 models were powered by a stock ETA 2801-2 with a 42-hour power reserve, the latest edition is powered by the cal. H-50 – a movement that first made its appearance in the extra-large Khaki Field Mechanical 50mm last year.

Made exclusively for Hamilton by ETA, the H-50 is essentially the same movement but with an upgraded 80-hour power reserve.

That was accomplished by reducing the consumption of energy, while enlarging the power source. The frequency of the balance, for instance, was slowed from 4Hz to 3Hz, or from 28,800 beats per hour (bph) to 21,600bph. And the core of the barrel arbor was reduced, which enabled the mainspring to be lengthened, thereby increasing the power reserve.

It is also worth noting that Hamilton is one of the few brands that is producing an affordable, hand-wound watch on a large scale.

The Khaki Field Mechanical is an extremely compelling reissue in terms of not just aesthetics and dimensions, but also the build quality and specs, which are almost unrivalled in its price segment, at least for a “Swiss made” watch.

Strap: NATO or leather strap for the white and black dials, and only NATO for the green dial.

The Hamilton Khaki Field Mechanical 38mm is already available in stores worldwide. Prices are as follows: