The upcoming Phillips New York auction includes an unusual watch: the Monaco Piece d’Art, a one-off vintage watch restored and hand-finished by TAG Heuer that’s being sold to benefit a charity in the city.

Created to mark the 50th anniversary of the iconic square-case chronograph, the Monaco Piece d’Art started out as a ordinary example of the Monaco ref. 1133B – also known as the “Steve McQueen” after the actor wore one in the 1971 film Le Mans – one of several specimens in TAG Heuer’s own museum.

The Monaco ref. 1133B was powered by the Calibre 11 Chronomatic, one of the first automatic chronograph movements ever launched; the Chronomatic made its debut in 1969, the same year as the Zenith Primero and Seiko cal. 6139. Though important in the history of watchmaking, the Chronomatic movement was functional and fuss-free. 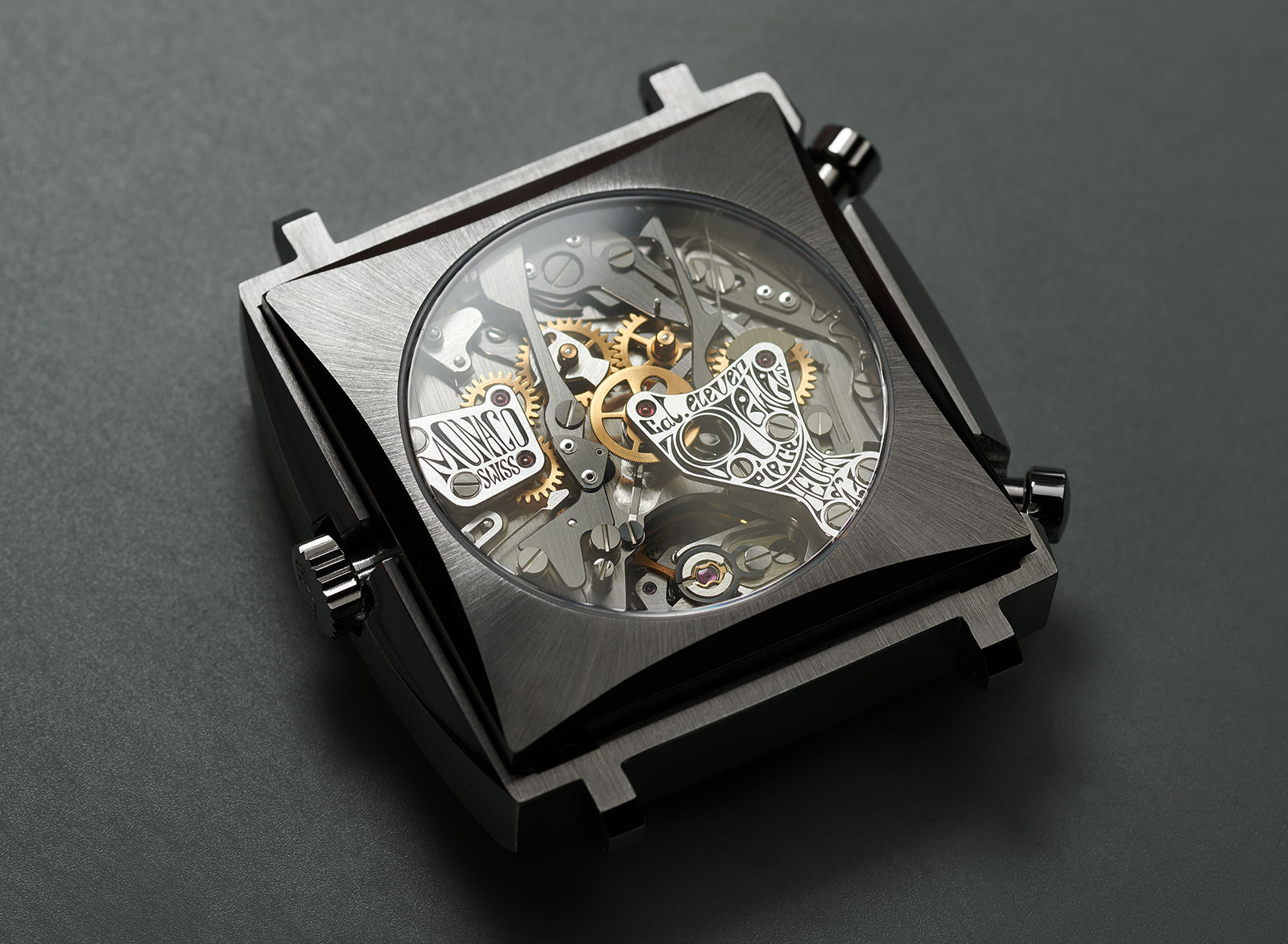 So TAG Heuer decided to change that. The movement inside the Monaco Piece d’Art was taken apart and then carefully decorated, part by part, by a four-person team of watchmakers over three months. The steel levers and springs of the chronograph mechanism were straight grained and bevelled, screws heads were flat polished, gears were given circular graining, and so on. Even the countersinks for the jewels and screws were polished. 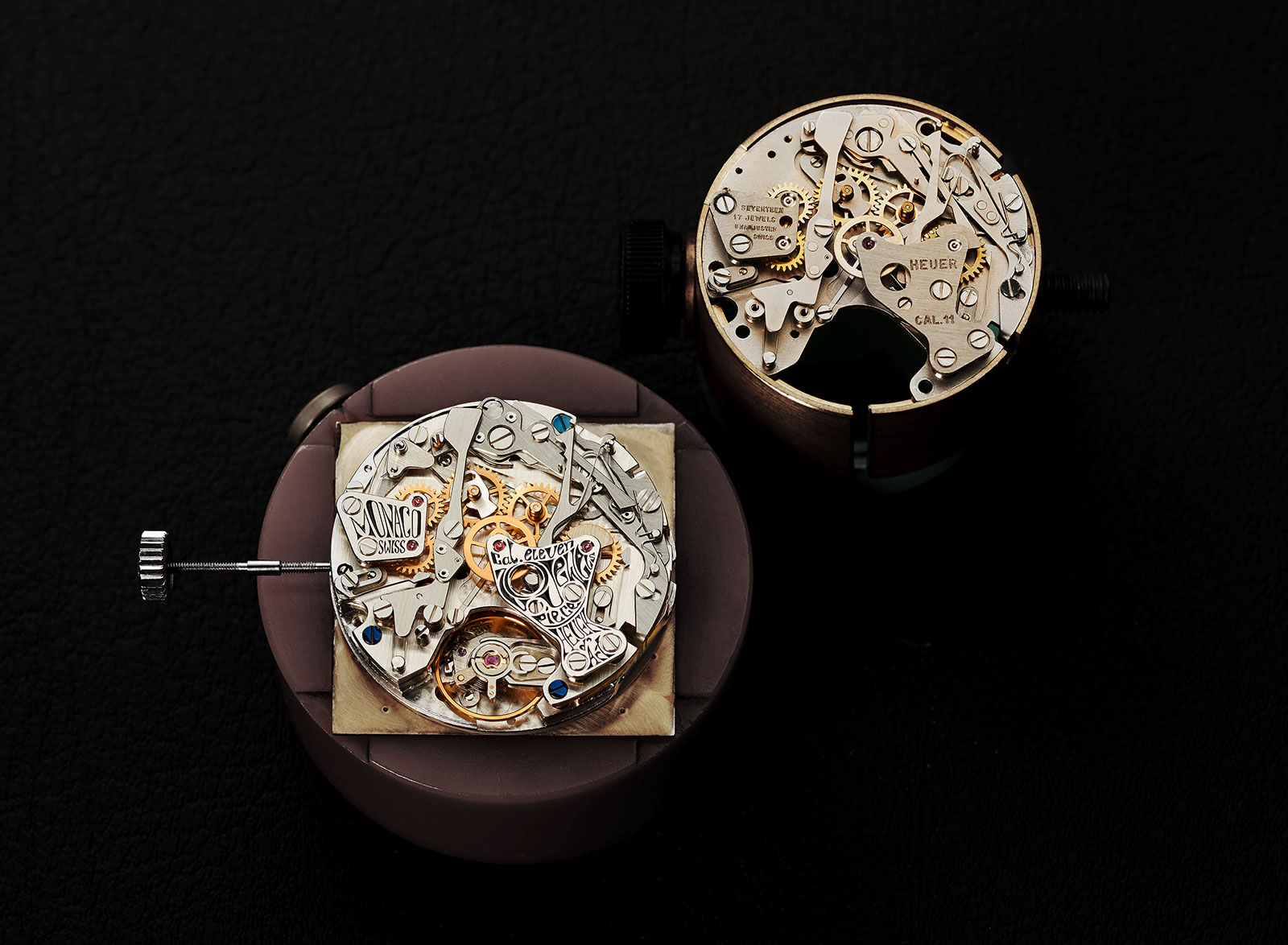 The refinished movement inside the Monaco Piece d’Art (left), with an original Calibre 11 Chronomatic

But the reworking of the movement was not merely aesthetic. The jewel count was raised by three, because three wear-resistant ruby bearings were installed in the chronograph mechanism to replace metal bearings, which will extend the serviceability of the movement over the coming decades. 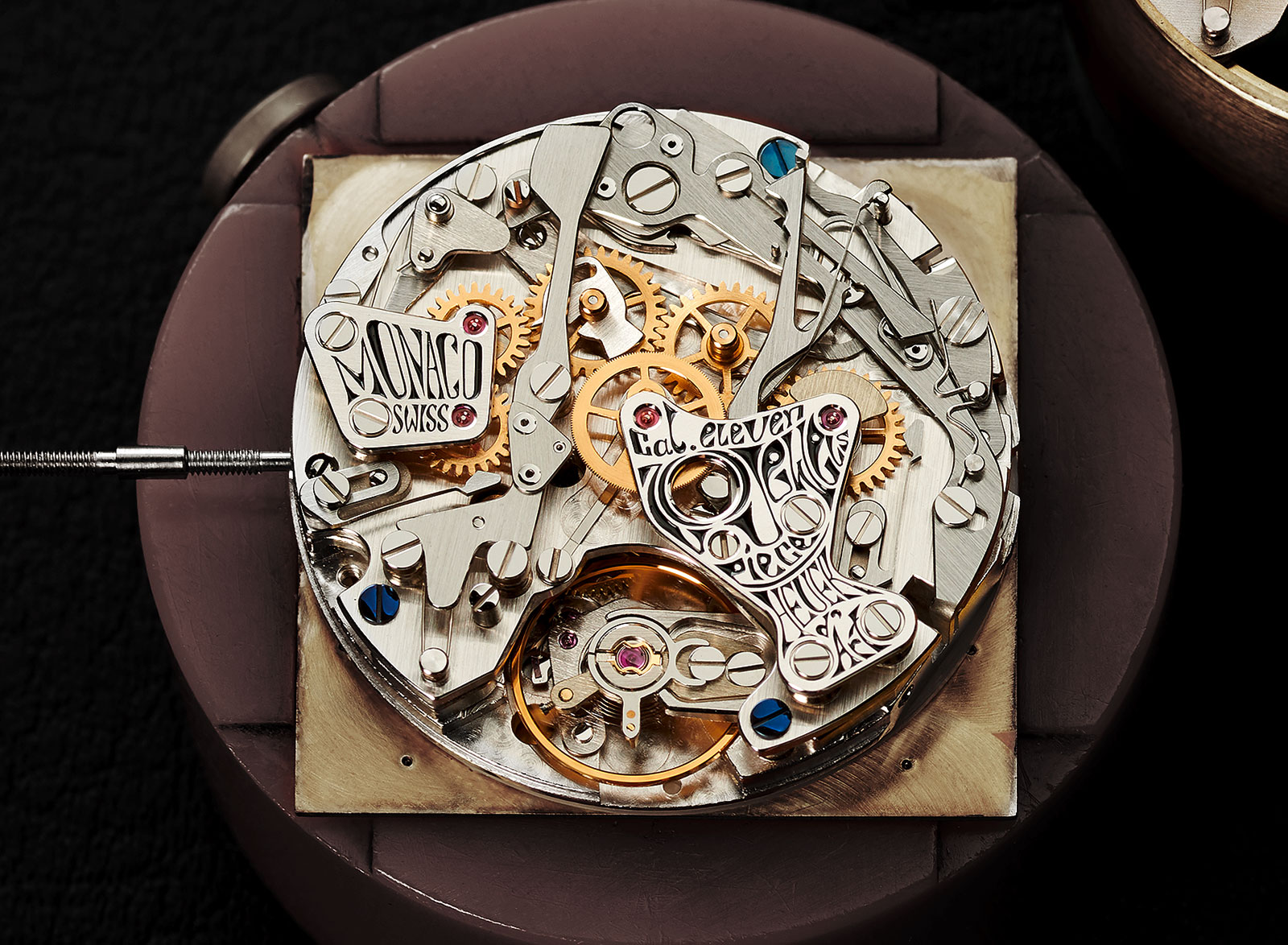 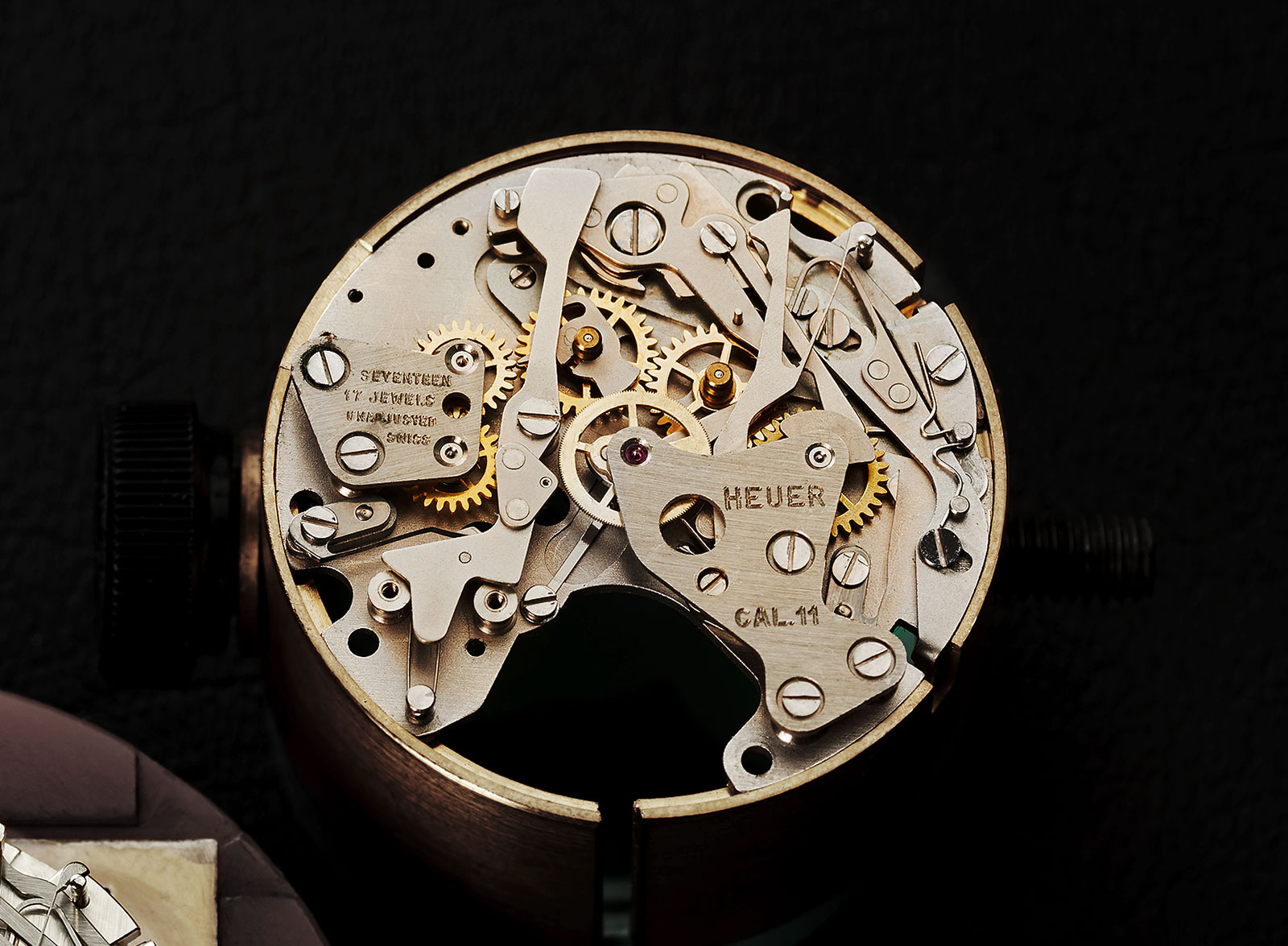 The chronograph mechanism of the Calibre 11 Chronomatic, removed from the base movement

And the chronograph bridges were replaced with newly made bridges that are significantly thicker, in order to accommodate the elegant, Art Nouveau-style engraving that was done by hand and then filled with black lacquer.

Despite all the decoration done to the movement, the Calibre 11 inside the Monaco Piece d’Art retains its original, industrial character. The wire springs of the chronograph mechanism, for instance, are still there. 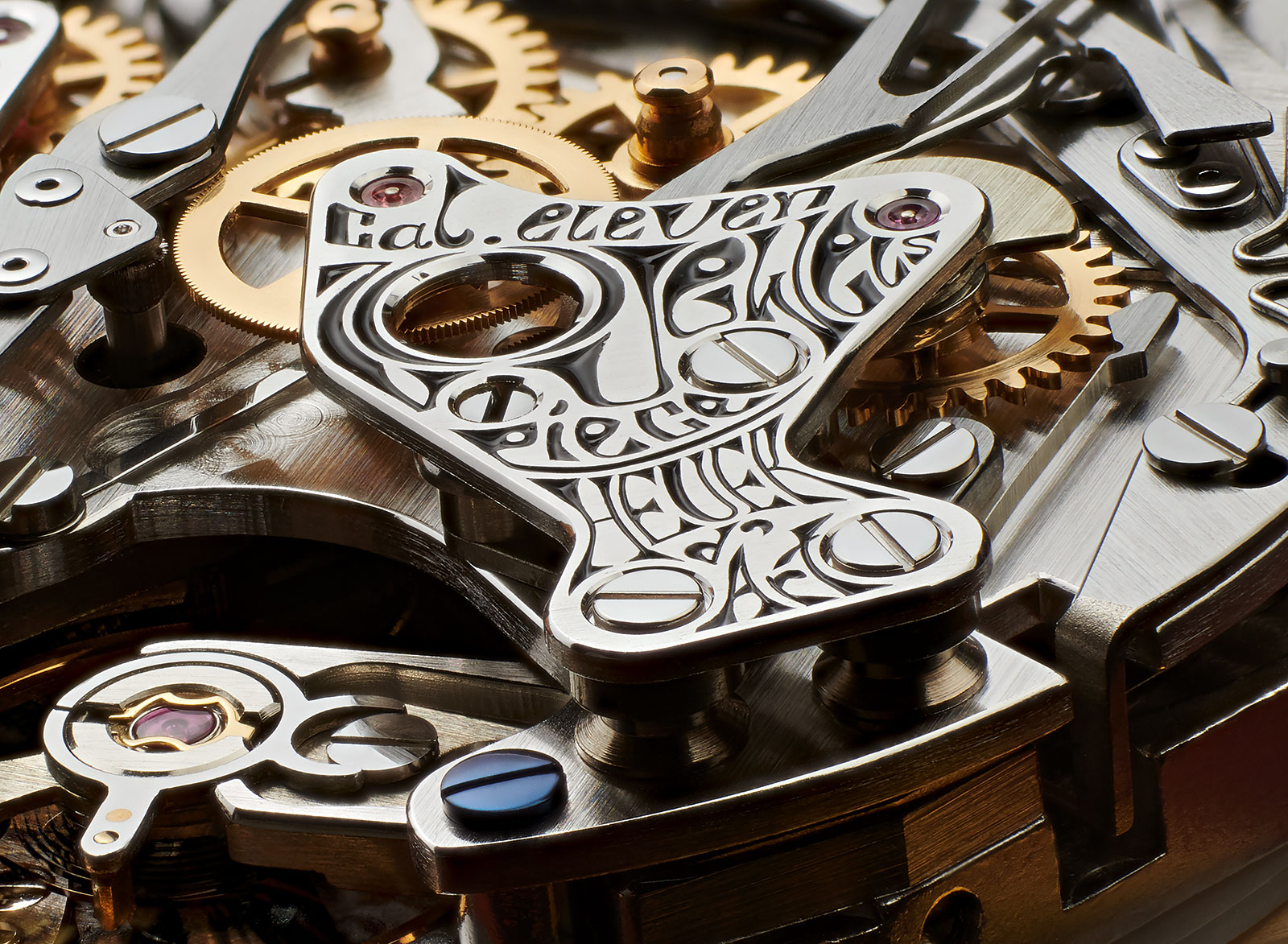 In order to show off all of the work done to the movement, a porthole was cut into the case back and fitted with a sapphire crystal; the crystal on the front is the original acrylic. Nothing was lost in this process, as the steel disc that came out of the case back will be included with the watch. 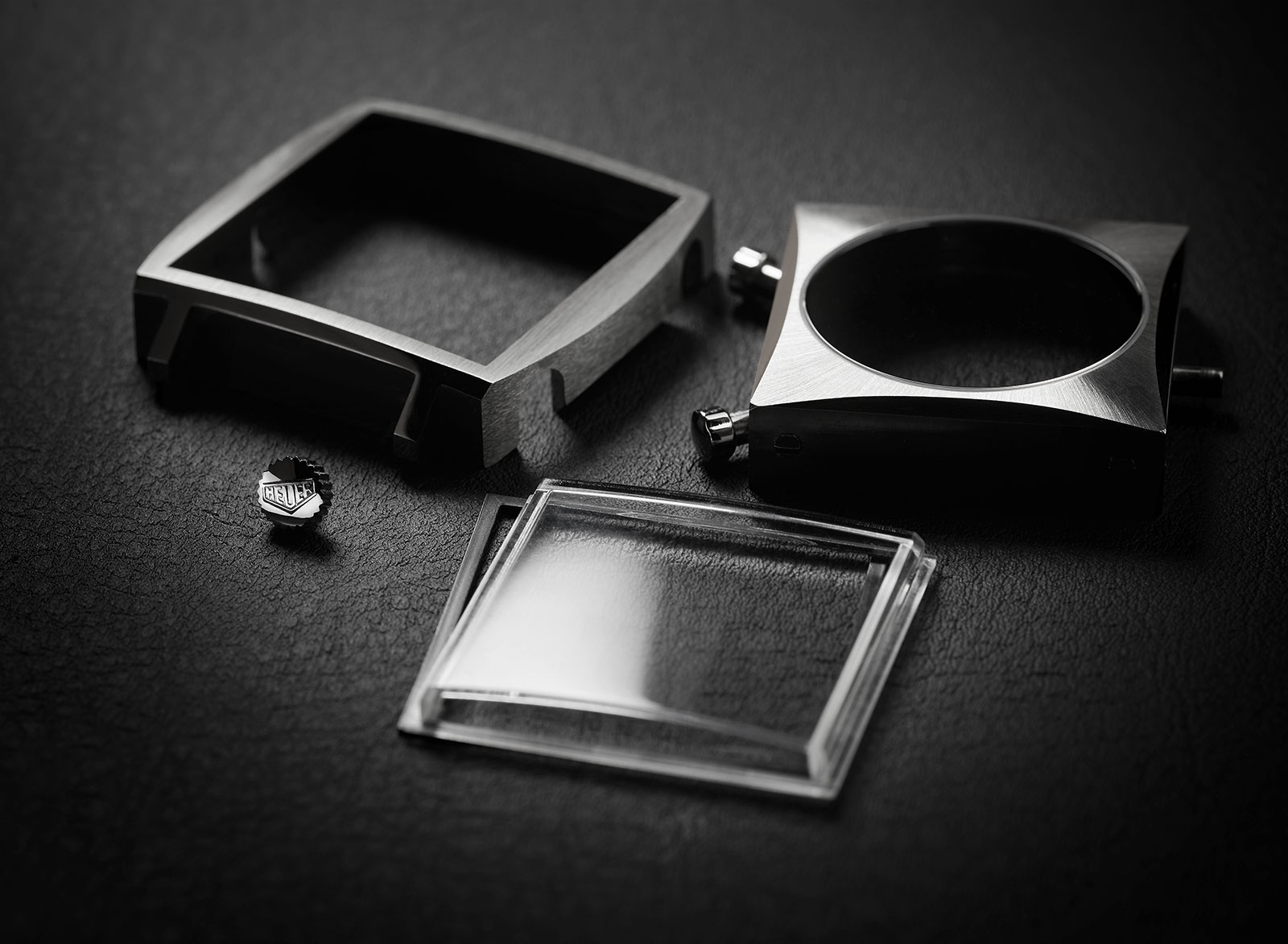 The rest of the watch is pretty much stock – right down to the tritium on the dial and hands – save for a discreet detail: the date disc has been replaced with one that has the date numerals in red, instead of the original black. From the front, this is the only element that separates the Monaco Piece d’Art from a standard watch. 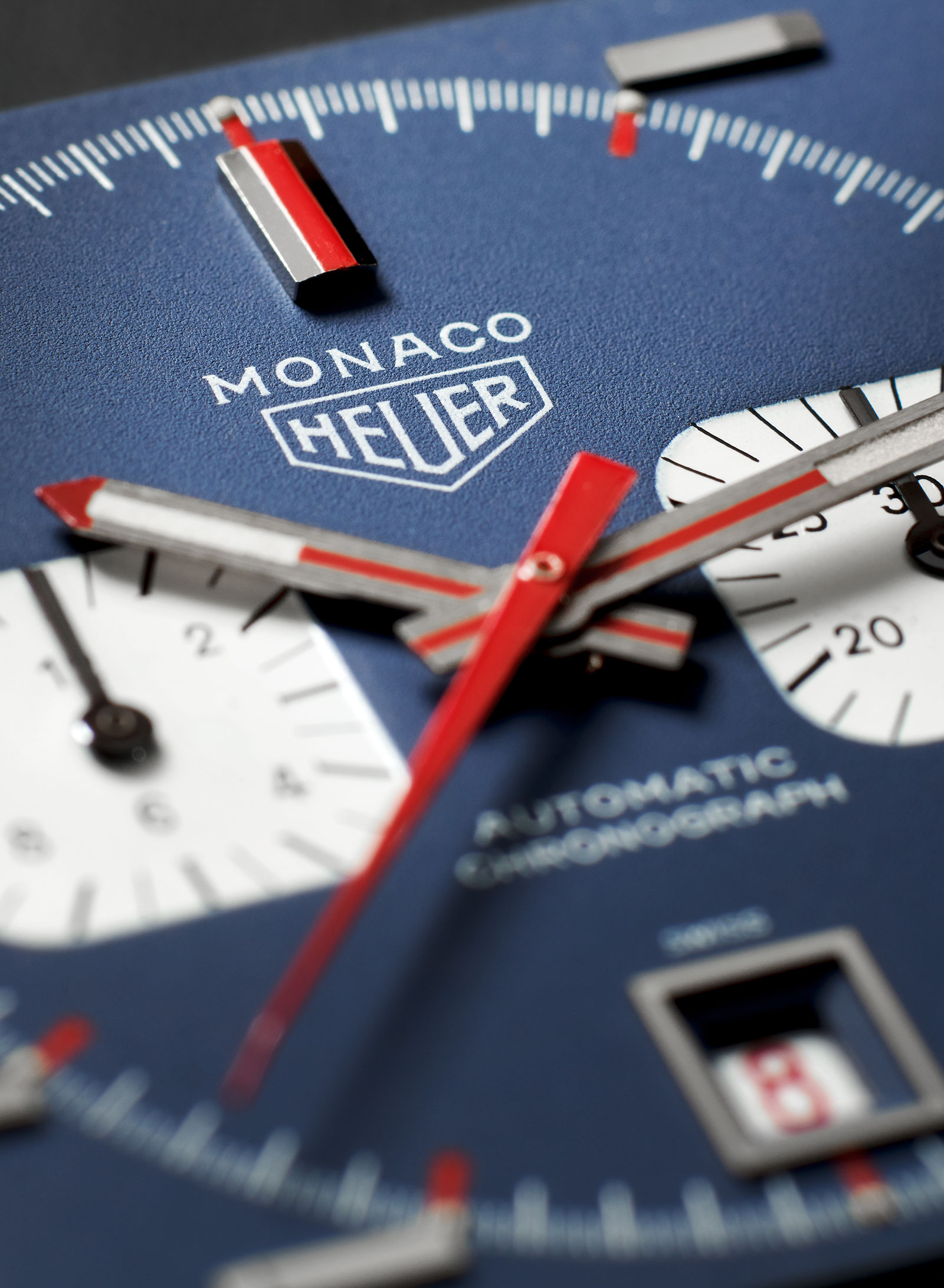 The Monaco Piece d’Art will be delivered in a custom-made box that reproduces the look of Heuer boxes of the 1970s, except it is made of wood and finished in red lacquer. It is also accompanied by the original papers, literally – a vintage Monaco leaflet is included. Other accessories include a drawing by Julie Kraulis, an artist who draws highly detailed portraits of watches in pencil, and a copy of the book dedicated to the Monaco, Paradoxical Superstar, signed by Jack Heuer, the honorary chairman of TAG Heuer.

The Monaco Piece d’Art will be sold at Phillips’ Game Changers auction on December 10, 2019. All proceeds will go to United Way of New York City to fund its ReadNYC campaign that promotes literacy amongst children. For more, visit Phillips.com.

Hands-On With The TAG Heuer Monaco Calibre 11 Chronograph, An Affordable Remake Of The 1133B "Steve McQueen"

At Baselworld 2015 TAG Heuer introduced the Monaco Calibre 11 once again. It's a remake of the vintage Monaco ref. 1133B "Steve McQueen" but priced a third less than the model it replaces.