Over the last couple of years, H. Moser & Cie has become well-known for its playful jabs at the industry’s foibles – see exhibit one – as well as its provocatively pared back “concept” watches that are completely devoid of indications and logos. But its latest release, the Pioneer Perpetual Calendar MD “Raspberry”, is a return to its roots – a visual revamp of its ingenious perpetual calendar with the added flourish of a gorgeous burgundy fume dial.

The perpetual calendar was the watch that made collectors sit up and take notice of Moser when the name was revived in 2005. With a minimalist, sensible display and ingenious mechanics, it was developed with the help of Andreas Strehler, an independent watchmaker who often builds complications for other brands.

Though it has been around for over a decade now, it remains one of the most advanced perpetual calendars both in terms of function and practicality. The “Raspberry” is a variant of the perpetual calendar sports watch first launched two years ago.

The case is stainless steel, and like most Moser watches, is substantially sized, measuring 42.8mm wide but a relatively slim 11.3mm in height, excluding the domed crystal. Like the rest of the Pioneer line, the case is characterised by pronounced concave flanks finished in fine, vertical fluting.

It features a slim, polished bezel and hence a wider face, which makes the watch appear bigger than it actually is.

But big or small, the dial is eye-catching, to say the least. Bright enough it almost jumps off the wrist, the dial is a striking shade of red executed in Moser’s signature graduated finish that radially brushed and darkens towards the edges.

The dial has been significantly redesigned compared to the earlier generation of the Pioneer perpetual calendar, hence the model name, which is short for “month-date”. Instead of the usual central arrow that indicates the month with the hour indices, the dial now features a month aperture next to the big date window at three o’clock. This takes up more space on the dial than the tiny arrow of before, but the dial colour makes the windows a secondary visual element so it doesn’t matter much.

Even with the additional window, the dial is still sublimely succinct. And it is arguably this configuration that emphasises the unique, tangible qualities of Moser’s perpetual calendar as it gives the wearer the satisfaction of witnessing the instantaneous jump of the calendar discs.

And the two windows give the dial a pronounced horizontal symmetry, with all the indicators now sitting in a line from nine to three o’clock. The symmetry is enhanced by the fact that the dial forgoes the tapered markers of the earlier model, replacing them with small luminous dots on the flange.

Two elements of the dial, however, can be improved. One are the frames for the calendar windows; they are too wide, with edges that aren’t sharply defined enough.

The second is more subjective: the silvered hands make for great legibility against the red dial, but feel starkly out of place. Blackened hands would probably blend in better, since they match the calendar discs and flange.

The Moser perpetual calendar is a brilliantly conceived mechanism that comes after the IWC Da Vinci and Ulysse Nardin Perpetual Ludwig in the evolutionary ladder of perpetual calendars, essentially combining the best of both worlds, and then some.

As pioneered by the Da Vinci in 1985, all indications in the Moser perpetual calendar are perfectly synchronised and can be advanced via a single crown, albeit only forwards; if the calendar is set past the current day, the wearer has to wait for the date to catch up. And like the Perpetual Ludwig of 1996, it relies on gears instead of levers and springs, solving the shortcoming of the Da Vinci, as the calendar can be adjusted both forwards and backwards.

But while the Perpetual Ludwig has a non-instantaneous, or “dragging”, date, meaning at the end of a 30-day month, the date jumps to “31” at about 9:00pm, before progressing to “1” at midnight, the Moser movement boasts a  “flash calendar”.

Essentially an instantaneous calendar display, it facilitates instant date changes regardless of the number of days in the month. This mechanism relies on two discs for the date, arranged one over the other and operating in a relay. The top date disc bears the date numerals “1” to “15” followed by an aperture, through which the bottom disc with “16” to “31” can be read.

In the second half of the month, the top disc is stationary as the bottom disc advances. At the end of the month, the top disc makes a single jump to the first day of the following month, instead of the several jumps needed if only one date disc was used. This also allows the date display to be unusually large. This set-up, however, means that the date numerals in the latter half of the month are noticeably deeper in the window than the those in the first half.

Today, other examples of instantaneous perpetual calendars include the Lange 1 Tourbillon Perpetual Calendar, the Patek Philippe ref. 5207P, and the F.P. Journe Quantième Perpétuel – all of which cost a lot more than the Moser.

More importantly, Moser’s perpetual calendar completely rethinks the design of a perpetual calendar, distilling the display into a solution that is astonishingly simple, elegant, and rigorously functional. There is neither a moon phase nor day of the week, just the month and date.

And the final, important but rarely used calendar indicator has been relegated to the back. The leap year indicator is incorporated on the barrel bridge, taking the form of a star-shaped wheel.

The movement boasts a seven-day power reserve achieved with the use of double barrels. It also incorporates a Straumann hairspring with a Breguet overcoil made by Precision Engineering, Moser’s sister company.

And the movement also features the trademark modular escapement found in most high-end Moser movements. It improves service turnaround as the module is swapped for a freshly lubricated and regulated module during an overhaul.

The finishing of the cal. 808 is largely mechanically executed but nevertheless beautiful – clean and above par for the price. It features Moser’s signature double-stripes, straight graining and large screwed gold chatons.

The bevels of the bridges and the moustache-shaped balance cock are wide and sharp as they are precision-milled by CNC, explaining some of the minute machining marks on the bevels. And the movement looks good also because it is large: at 34mm in diameter, the movement fills the case as it should.

Regardless of the iteration, Moser’s perpetual calendar is a significant milestone in the development of the complication, being one of the most advanced and unique, both in terms of construction and design.

At 39,900 Swiss francs, or about US$40,000, the Pioneer Perpetual Calendar MD in steel is also one of the most affordable – by some margin – instantaneous perpetual calendars on the market.

And if the “Raspberry” dial is too much, the other version of the Pioneer Perpetual Calendar MD has a dark blue fume dial with more conventional hour markers. Moser offers the same movement inside its more classical Endeavour case, also in steel, for about the same price. 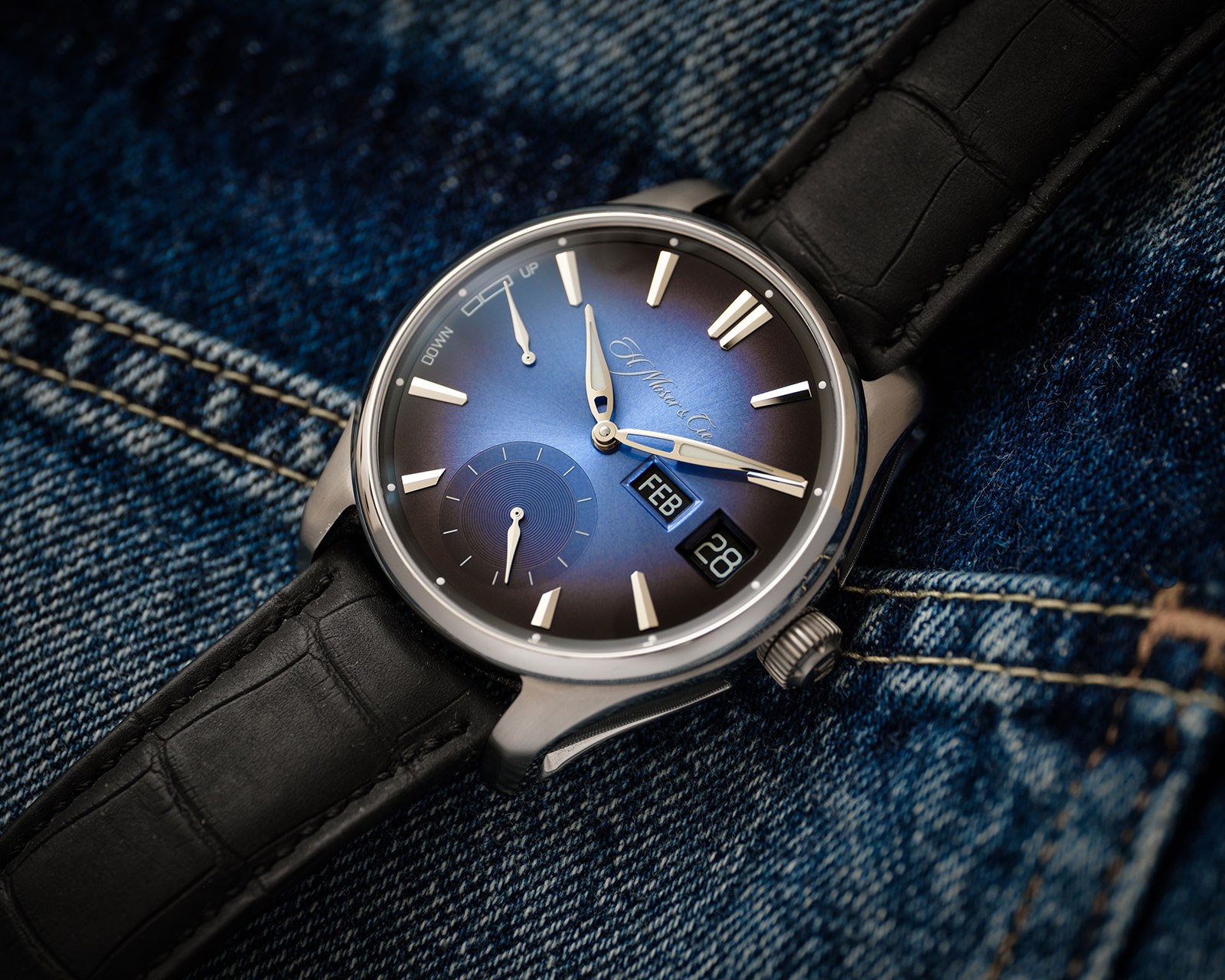 The Pioneer Perpetual Calendar MD “Raspberry” in steel (ref. 3808-1200) is limited to 50 pieces, and is already available at H. Moser & Cie. retailers.

Correction September 3, 2019: The hand-wound HMC 808 caliber is not fitted with a double hairspring, but a regular one with a Breguet overcoil.