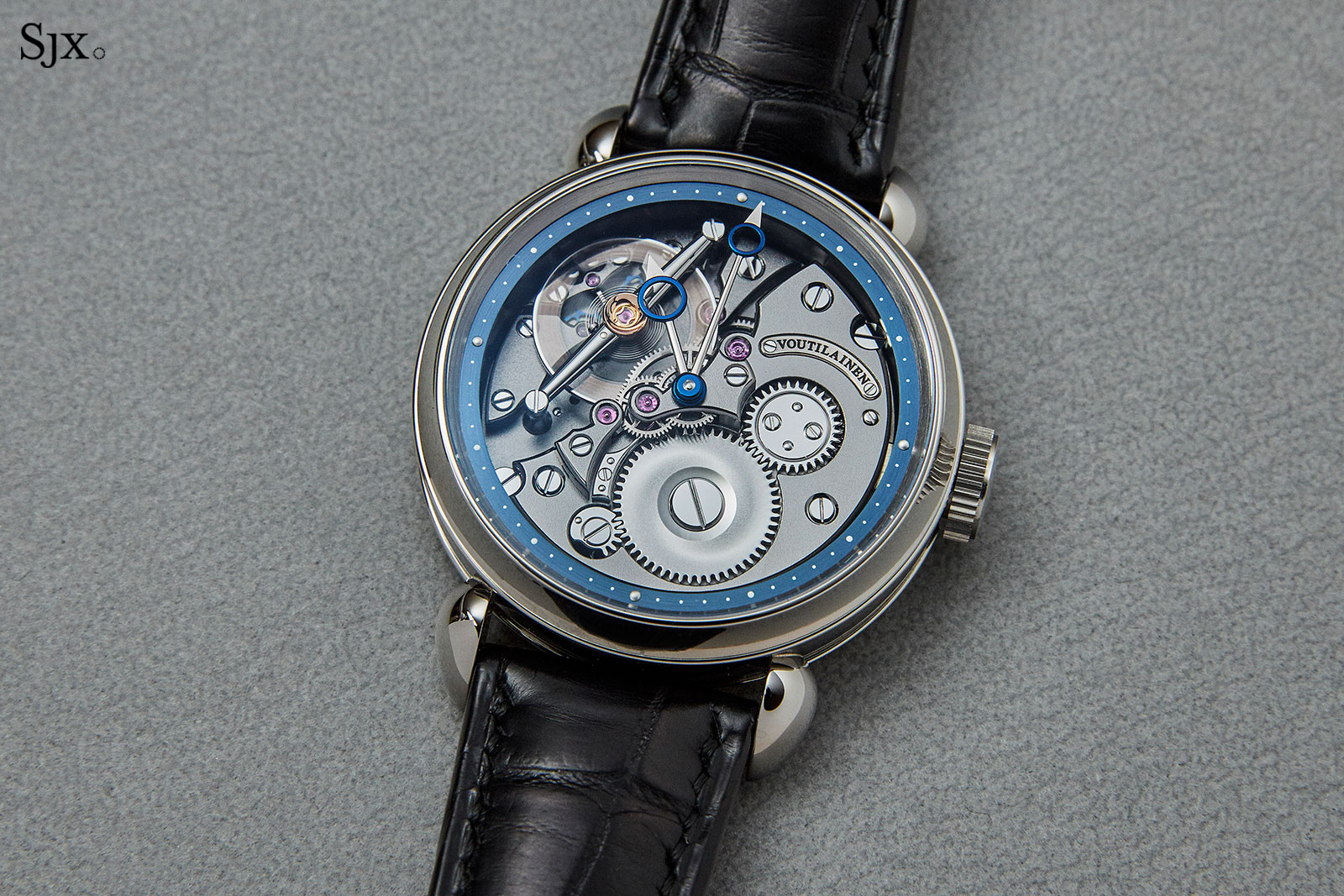 Voutilainen’s signature watch is the Vingt-8, powered by the cal. 28, which is time-only but impressively constructed and beautifully finished. So earlier this year Voutilainen flipped the movement, inverting the calibre to have the interesting bits on the front, and relegating the base plate to the back.

The result is the 28TI – short for “titanium inverse” – a watch that has all the trademark elements of a Voutilainen, gorgeous detailing and refined decoration, but is as over the top as a classical watch can be.

Inverted movements are not new, they can occasionally be found in antique pocket watches, and over the last two decades they have gradually become fashionable in modern watchmaking. The pioneer in the current era is the Breguet La Tradition, though strictly speaking it is not an inverted movement since it was constructed from the ground up to look like a 19th century souscription pocket watch.

Actually inverted is the Glashütte Original PanoInverse, and more recently, the Moritz Grossmann Backpage. But none of the other brands making such movements do so to the same quality as Voutilainen, making the 28TI unique in its class. 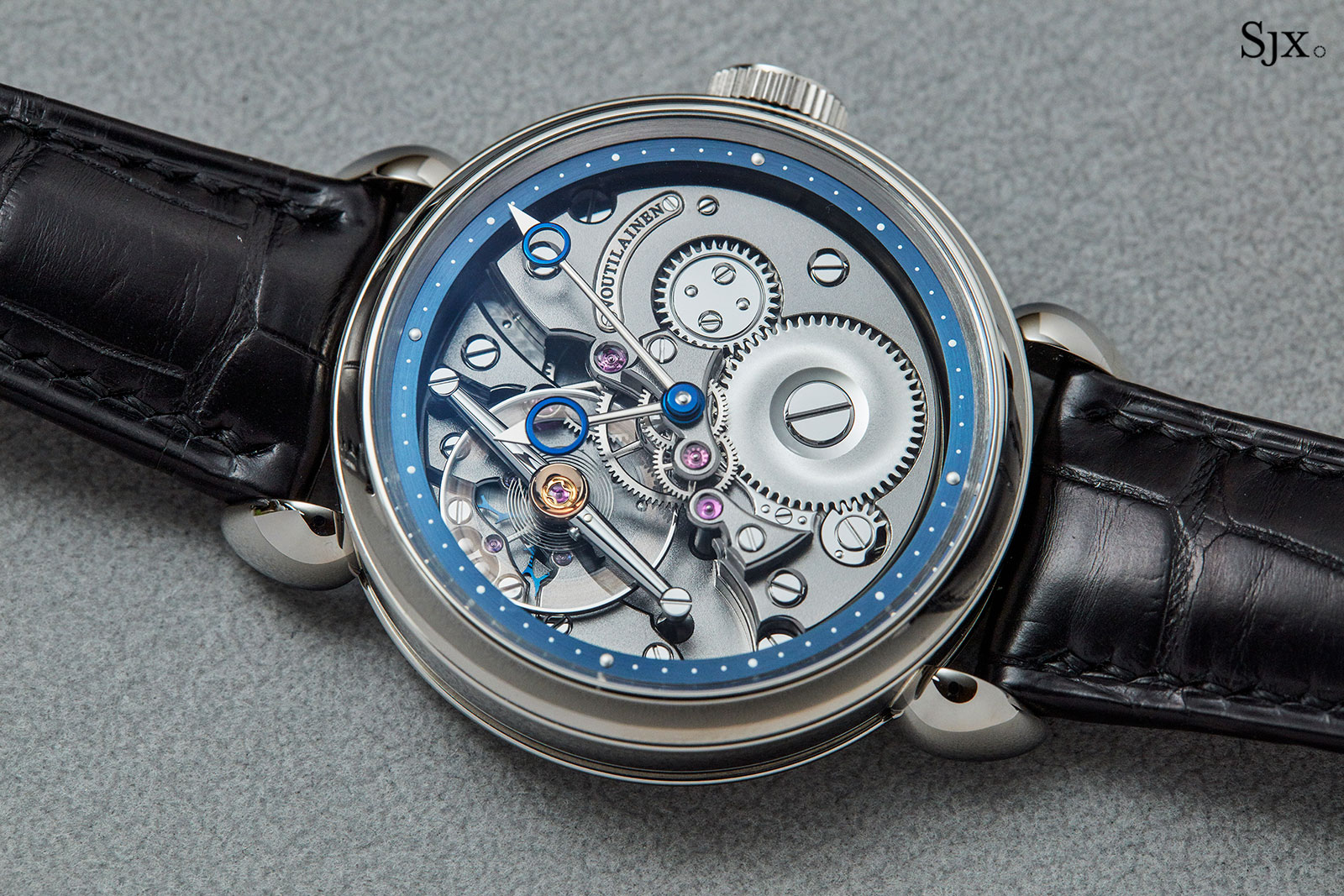 Mechanically the 28TI is largely similar to the standard cal. 28, with some changes in the construction for the flipped display. Additional gearing is required to drive the hands in the opposite direction, while also allowing for hand-setting via the crown.

The changes start with a series of gears that replace the canon pinion, which carries the hands in a conventional watch. The new series of gears are also linked to the keyless works so that the crown can adjust the hands. 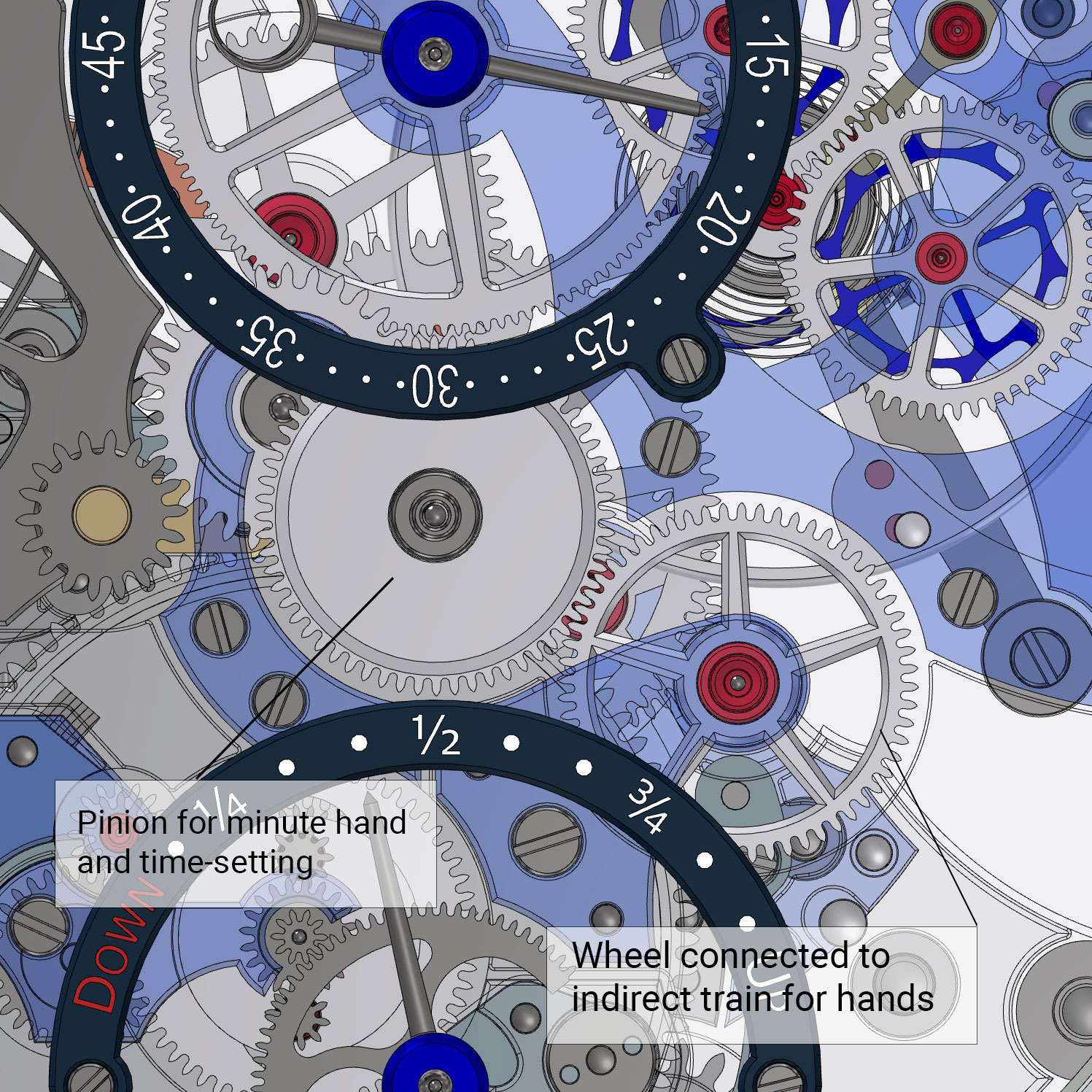 A closeup of the movement seen from the back of the 28TI. Diagram – Voutilainen

These gears terminate in a wheel that’s linked via a long shaft – long enough it extends through the entire height of the movement – to a pinion on the front of the watch. This pinion in turn is linked to another series of gears, visible on the front under a raised bridge, which drive the hands; the same bridge also carries the hands.

Since the movement is essentially a conventional cal. 28 that’s been flipped over, the hands are actually travelling in the inverse direction as compared to a standard watch. The series of gears visible on the front also serve to reverse the direction of the hands, so that they travel clockwise on the dial of the 28TI.

All of the extra gears – essentially an indirect wheel train – mean that a tension spring is needed in order to prevent stuttering or “floating” of the minute hand. 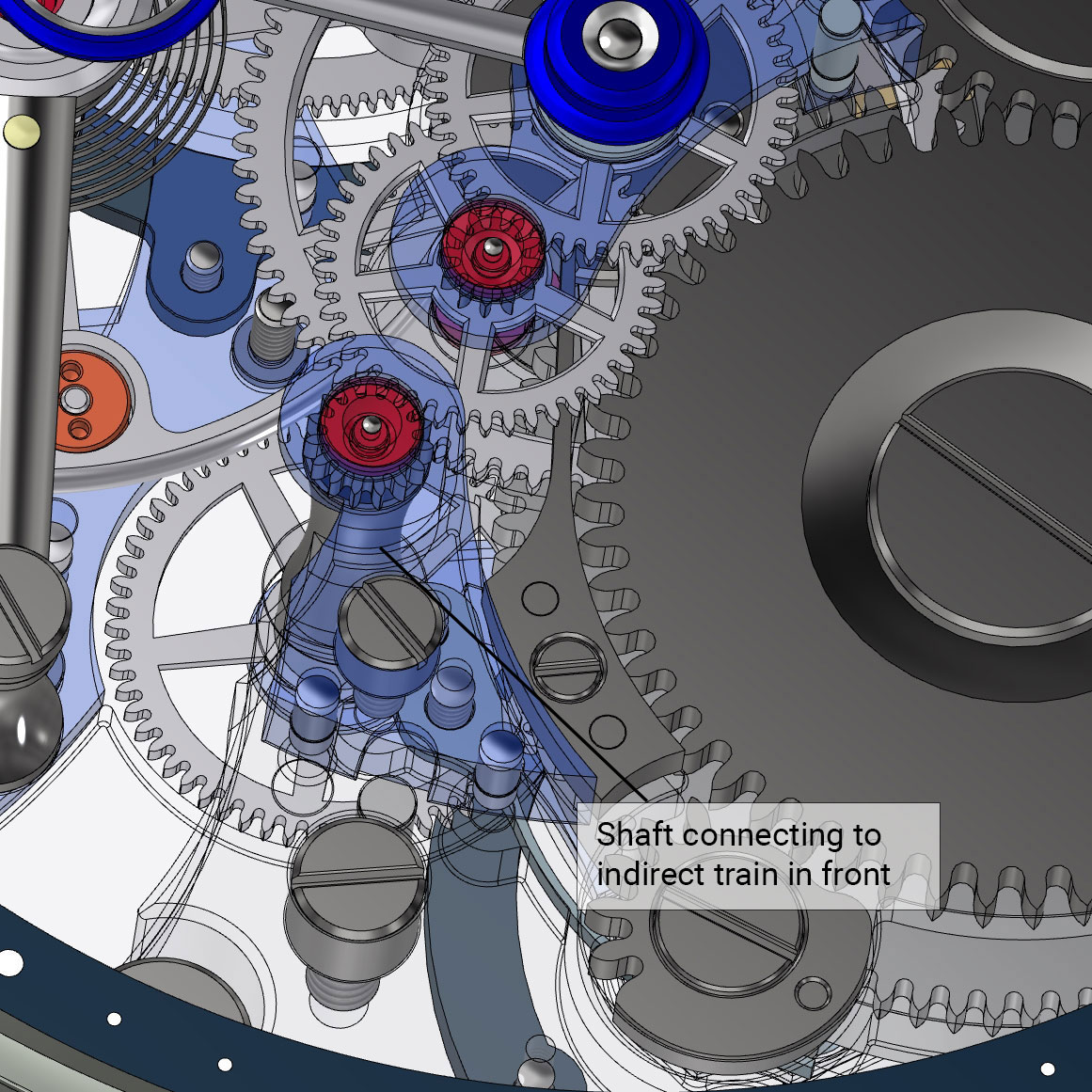 The wheel train on the front. Diagram – Voutilainen 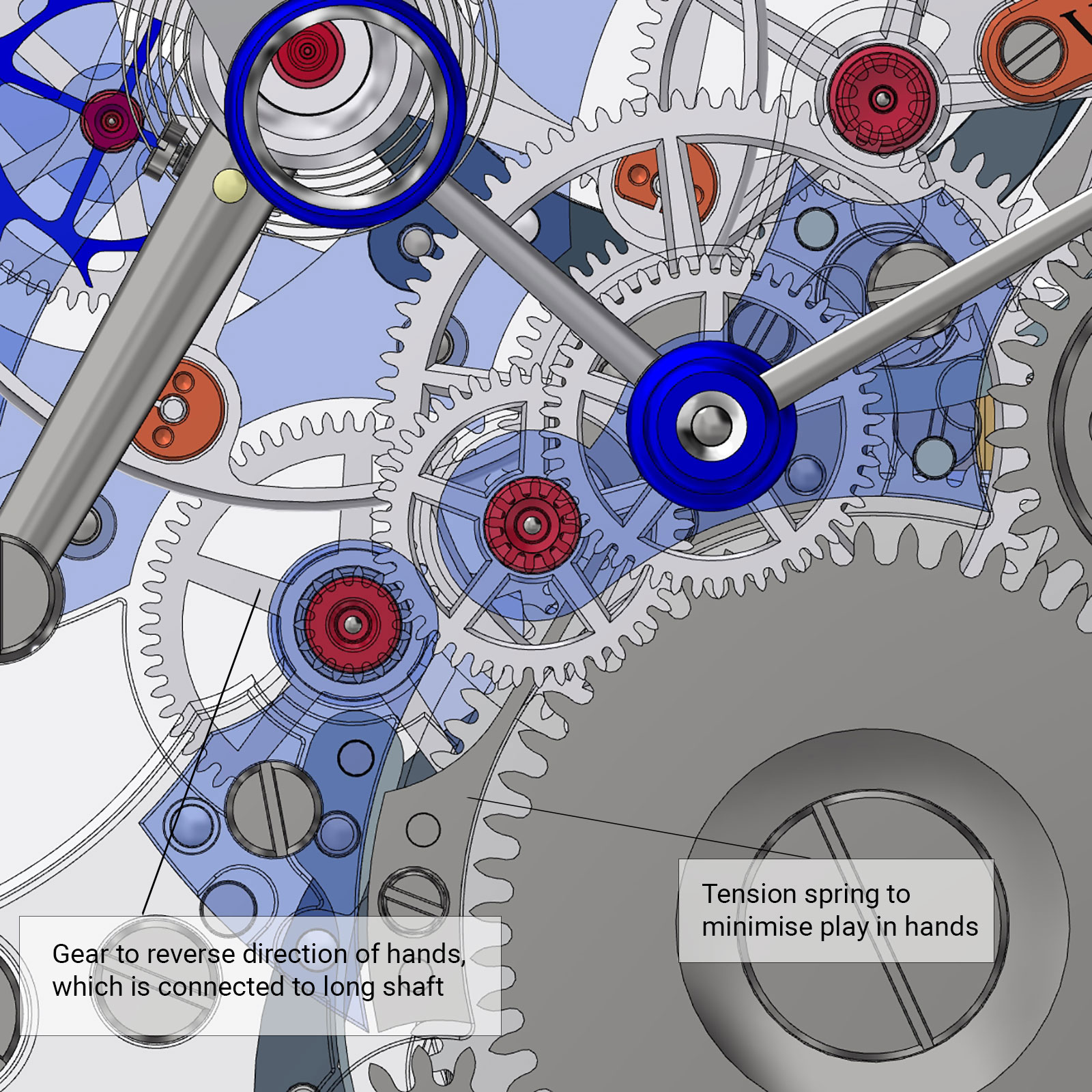 The front wheel train from another angle. Diagram – Voutilainen 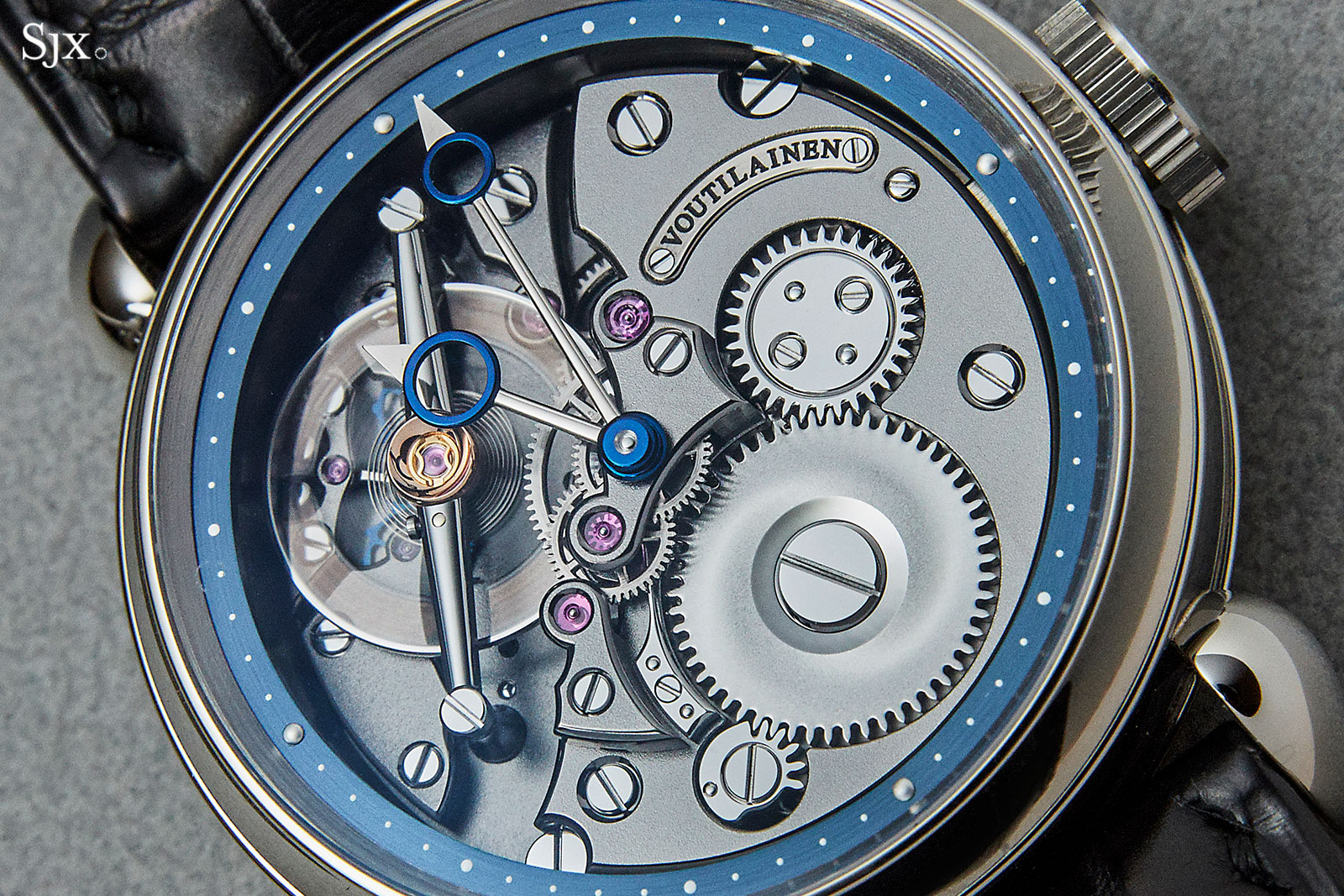 Everything is perfectly executed in fit and finish, but the indirect gear train is a bolt-on addition rather than an integral part of the movement. That is true mechanically, and also visually – the bridge for the indirect train sits on top of the barrel bridge. The approach is simpler than designing an inverted movement from scratch – the idea is a little inelegant – but everything is executed to the highest degree. 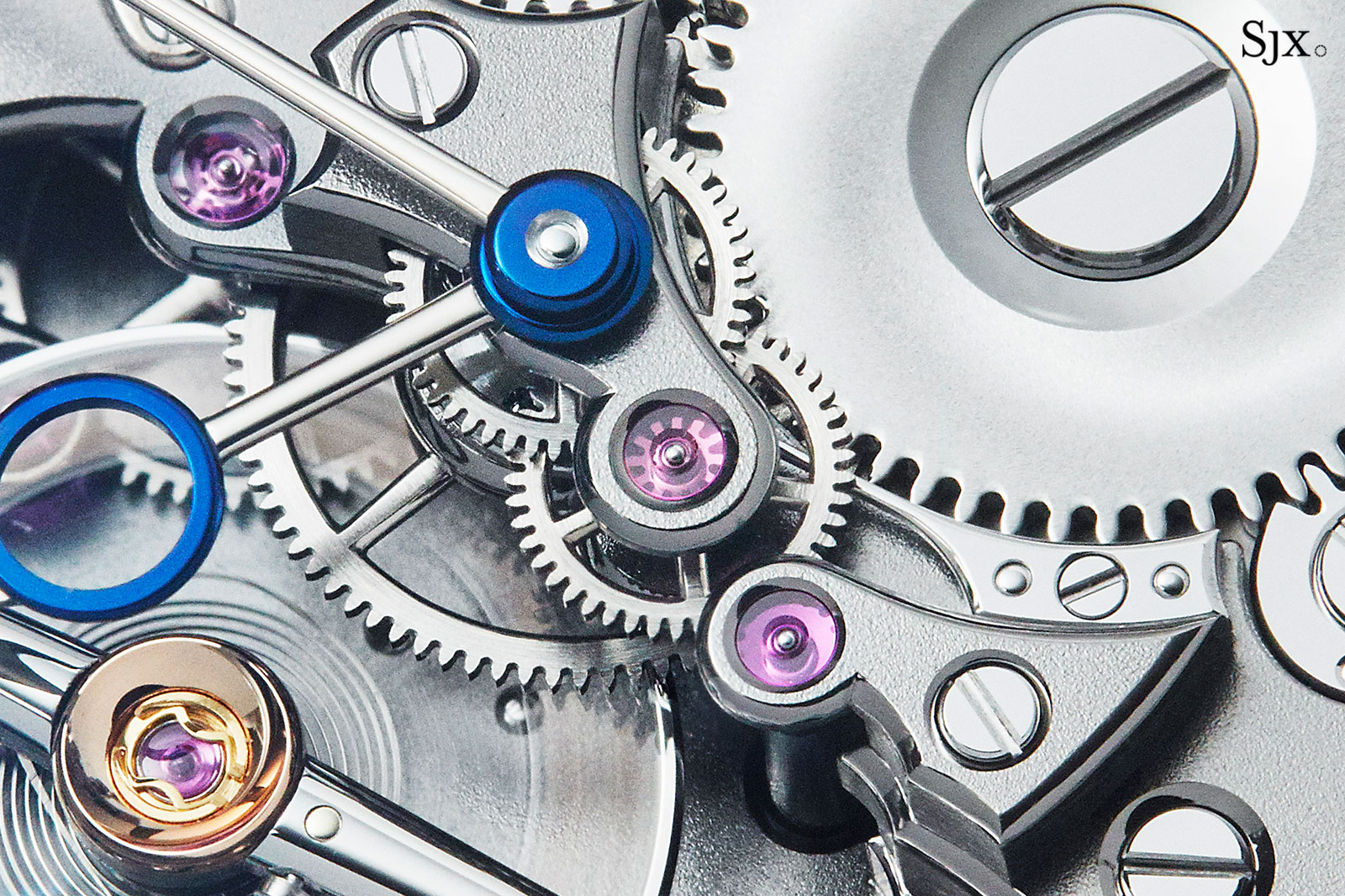 Conceptual nitpicking aside, the view from the front is a impressive, from a distance and up close. The highlight, as it is on any cal. 28, is the bridge for the oversized balance wheel. It’s long, rounded, and mirror-polished, and just looks good. 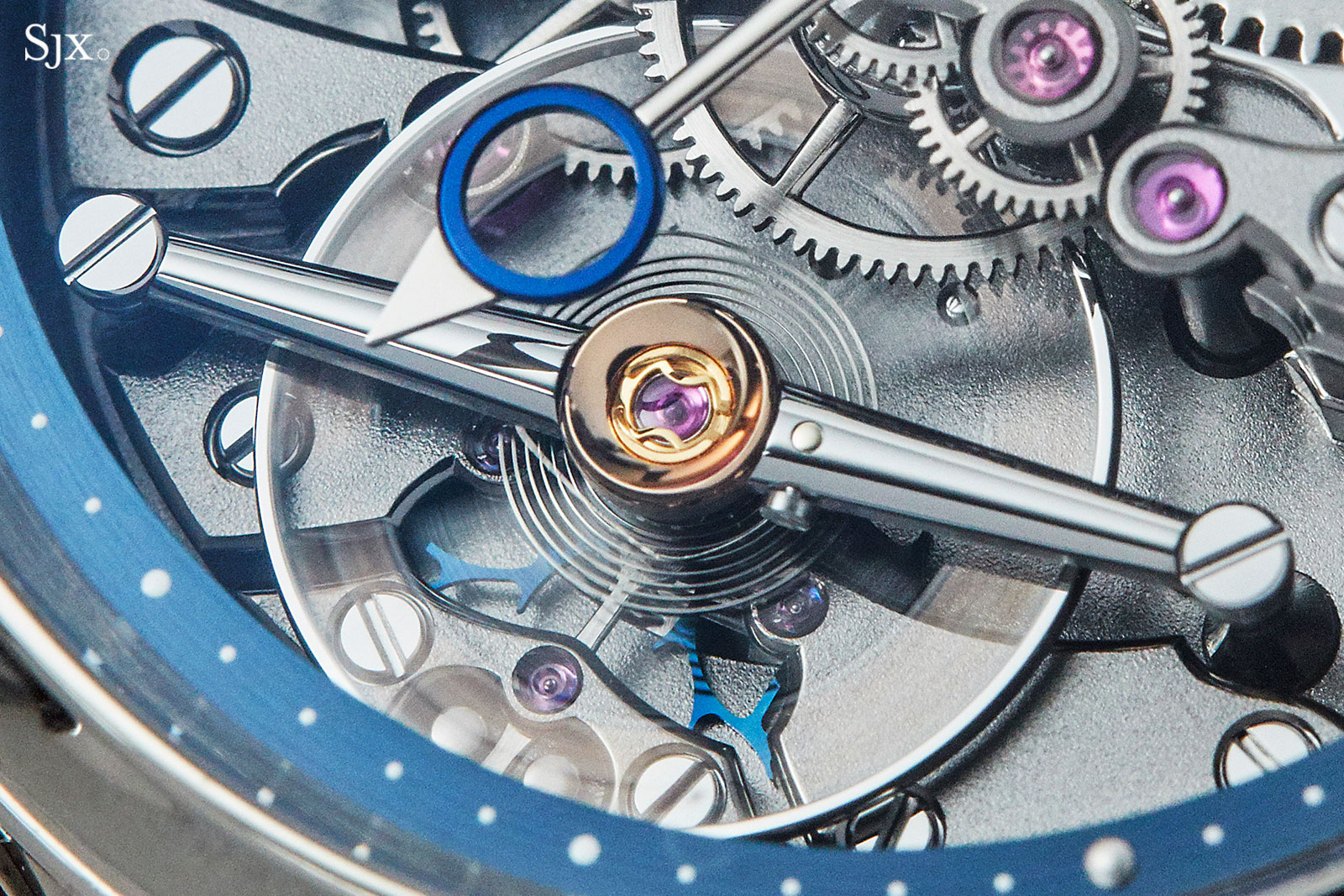 All the details within the movement are dealt with properly, right down to the polished countersinks for screws and jewels, as well as the chamfered spokes of the gears. If there’s one element that could be improved, it is the edge that separates the polished, bevelled edges of the bridges from the frosted top surfaces; on some bridges it is uneven. 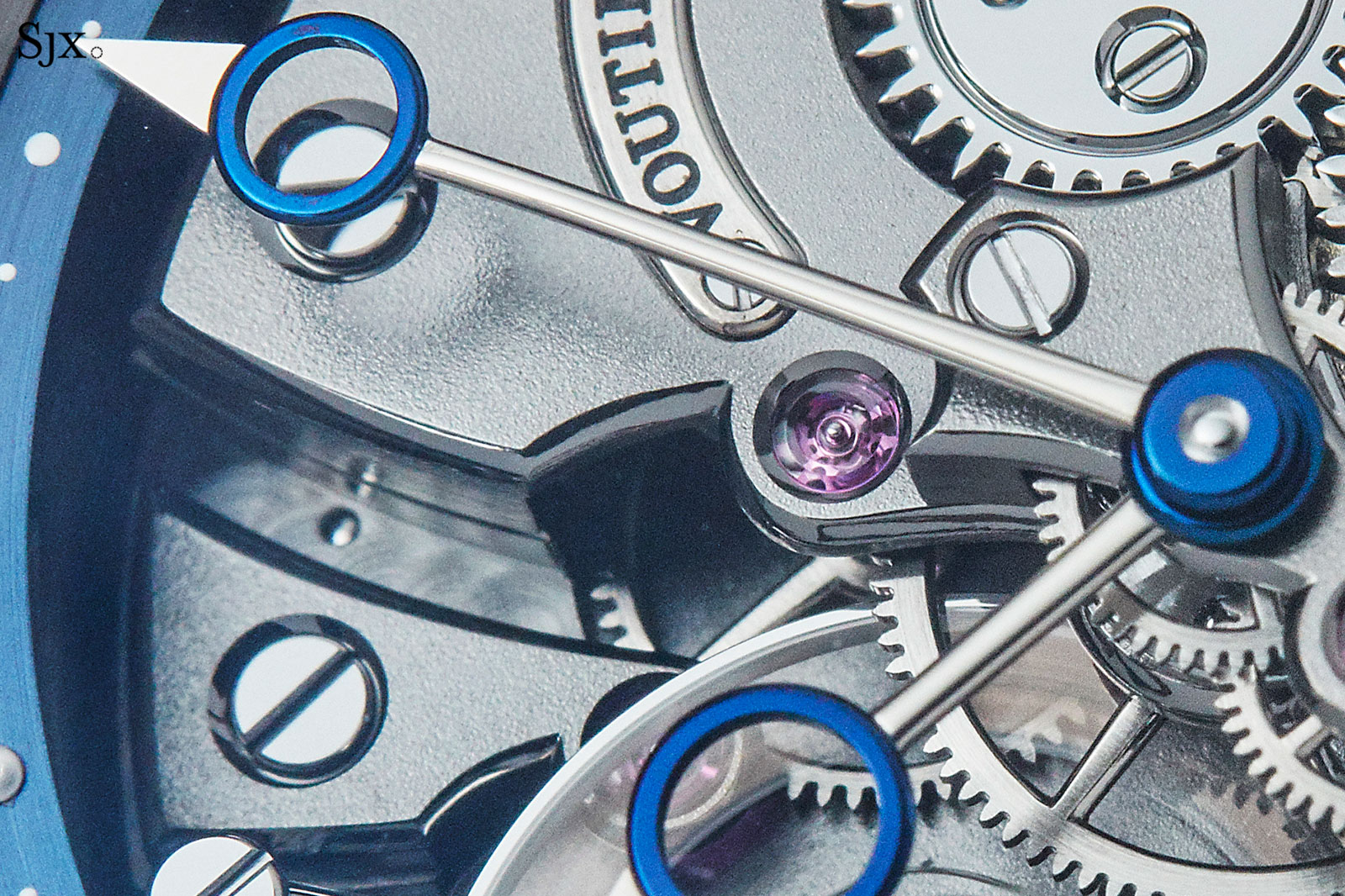 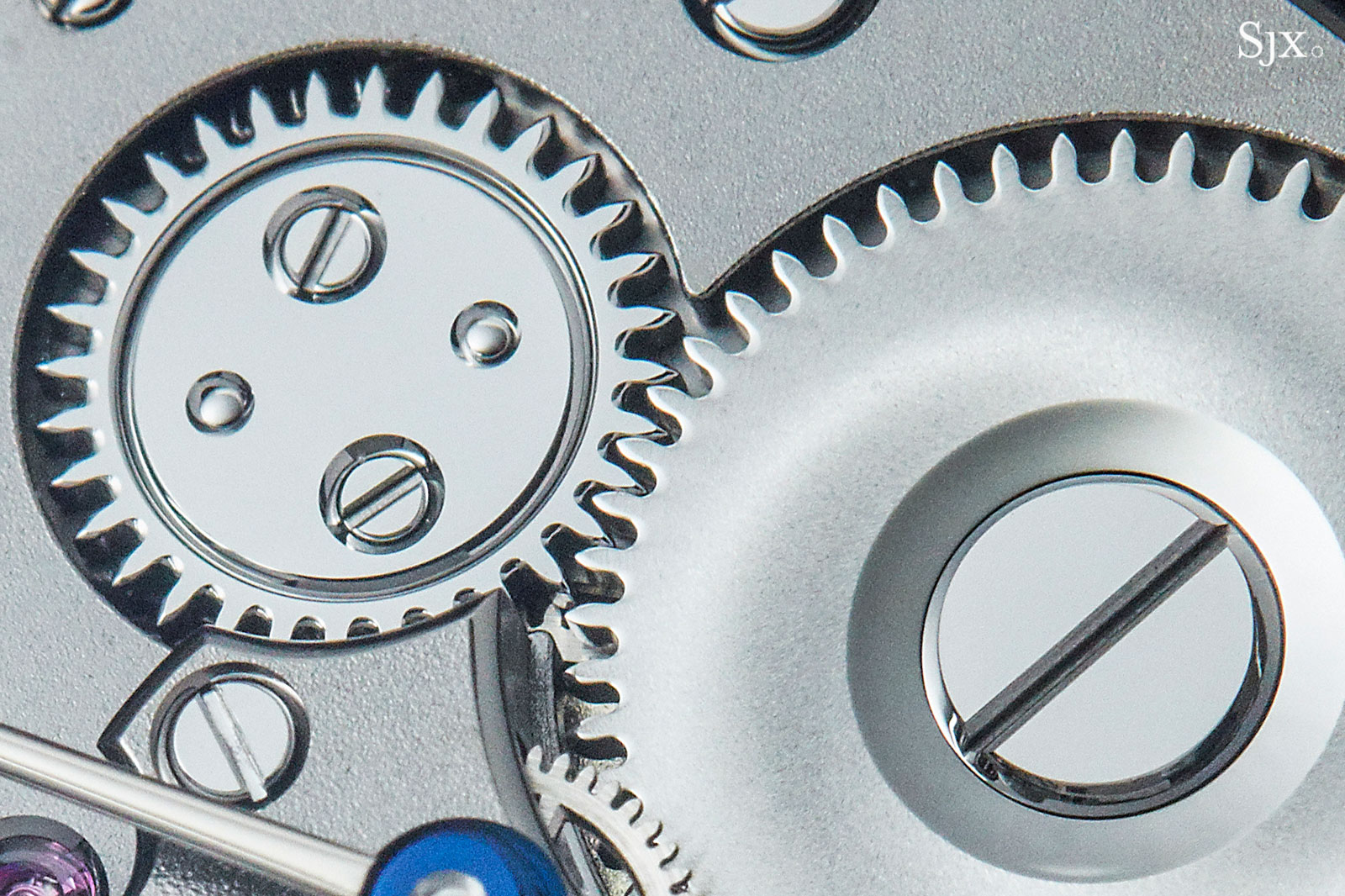 The polished teeth on the barrel ratchet and crown wheels

Thicker but not really

Unsurprisingly, the indirect gear train raises the height of the movement, so the 28TI is the same diameter as the standard Vingt-8, but significantly thicker. It’s 13.4mm high, compared to 11.5mm for the stock model. 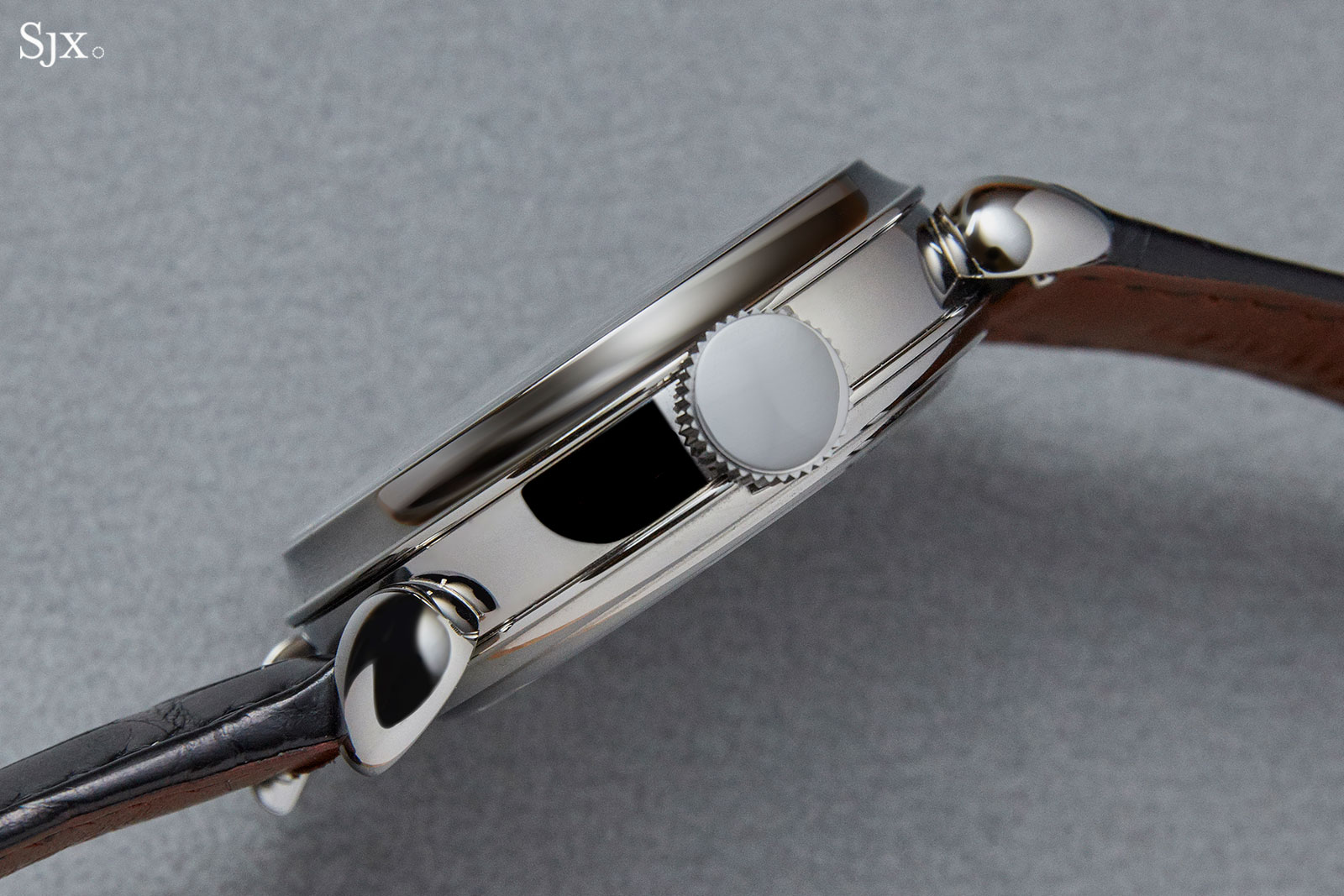 But the case middle and back remain the same, and the increase is accommodated by a thicker bezel, which is also concave instead of the usual convex, reducing its apparent height. Consequently, the extra 1.9mm is not perceptible in the metal. On the wrist the 28TI feels much like a standard Vingt-8, although the open dial does make it appear slightly larger. 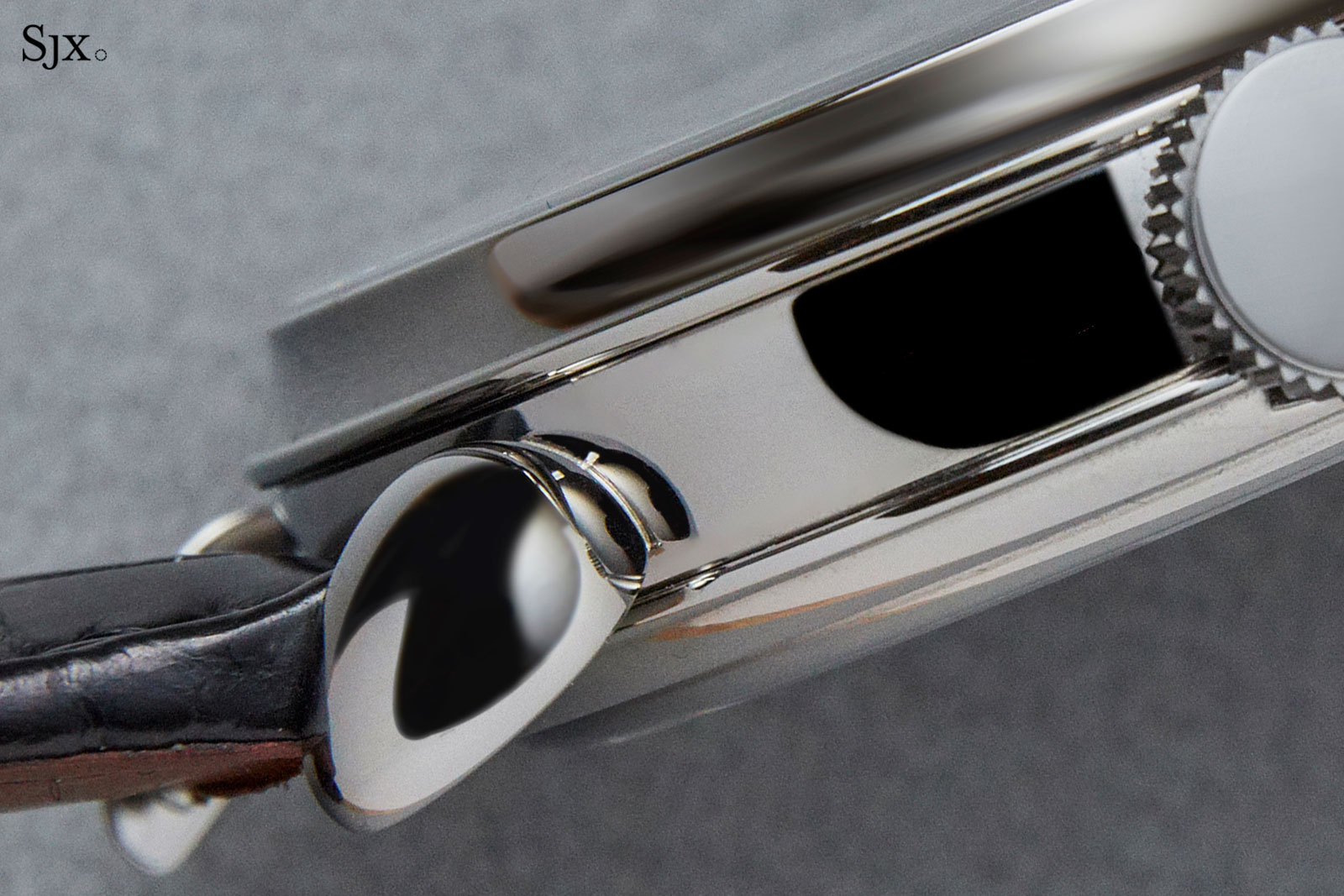 On the other side

The view from the back is necessarily simpler, since the movement has been inverted. Everything on the back is usually what’s on the front of a standard Vingt-8, but vertically flipped so the seconds is at 12 o’clock, and the power reserve is at six. 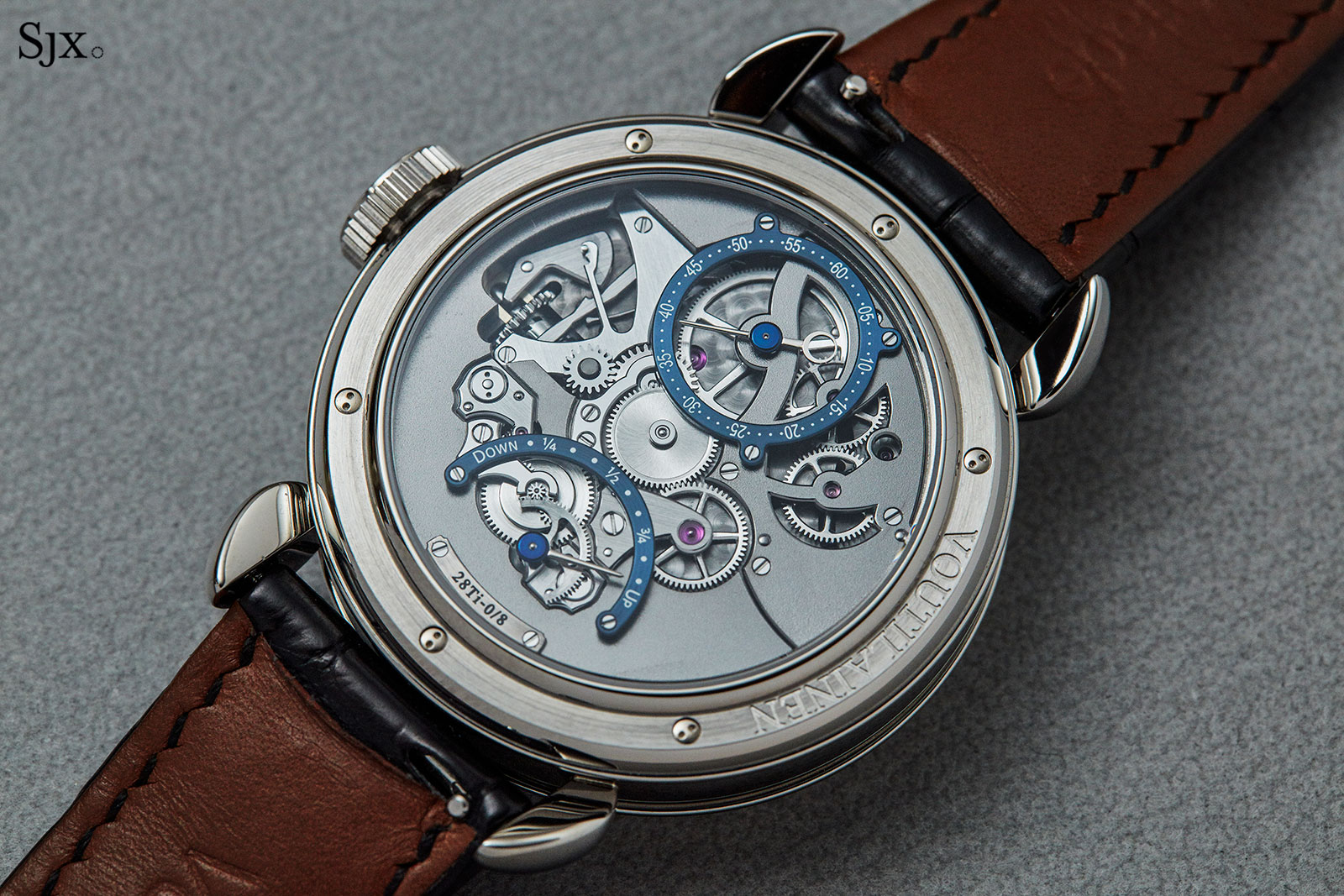 But as it is on the front, everything is attended to with care. It illustrates the quality of finishing at Voutilainen; Kari Voutilainen states that the visible finishing here is identical to the hidden finishing of the under-dial mechanics on a standard cal. 28.

The 28TI movement does have a few extra flourishes, namely the open-worked bridges for the seconds and power reserve, which gives the movement a mechanical look that’s not usually found in a Voutilainen watch. 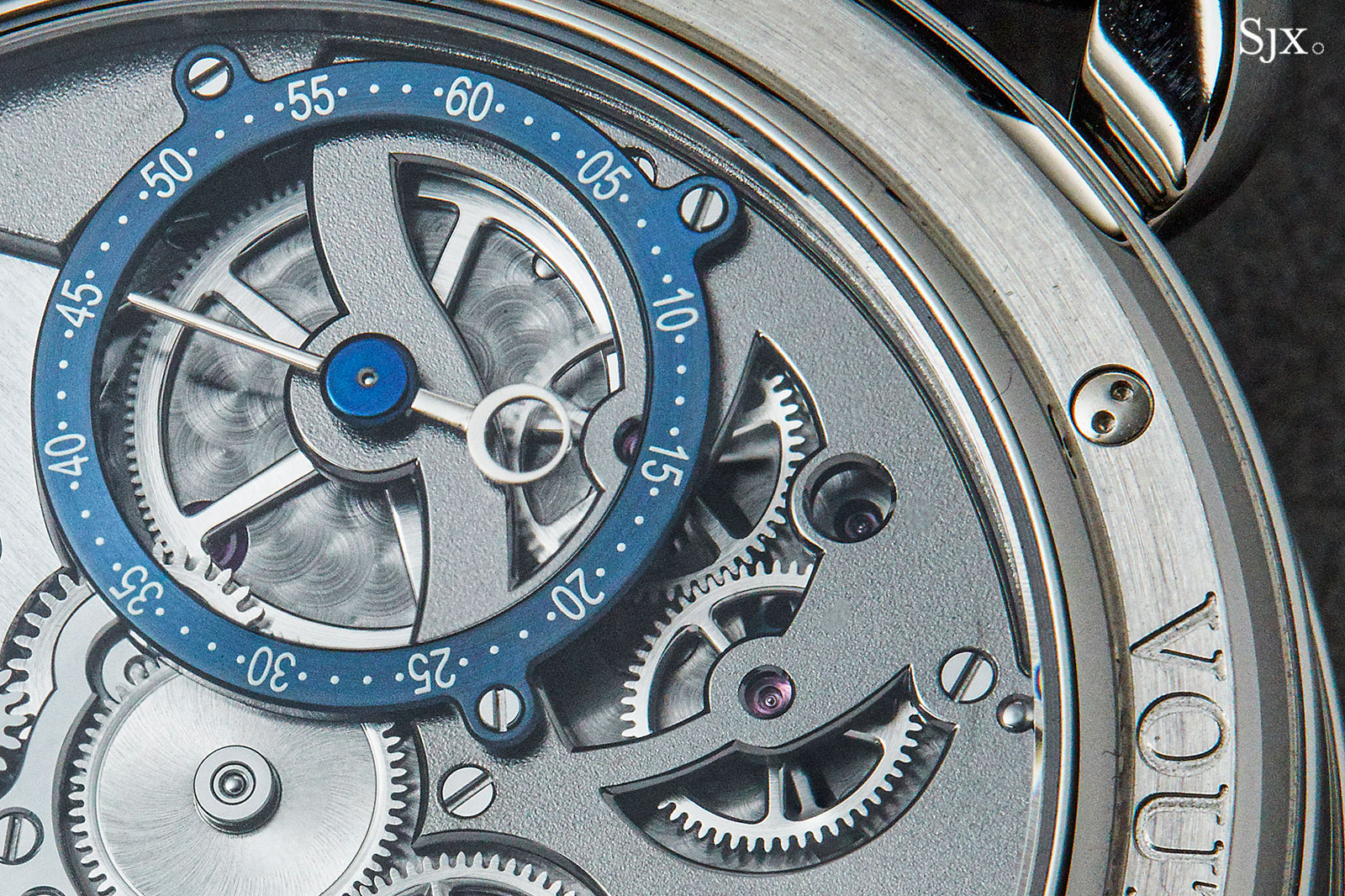 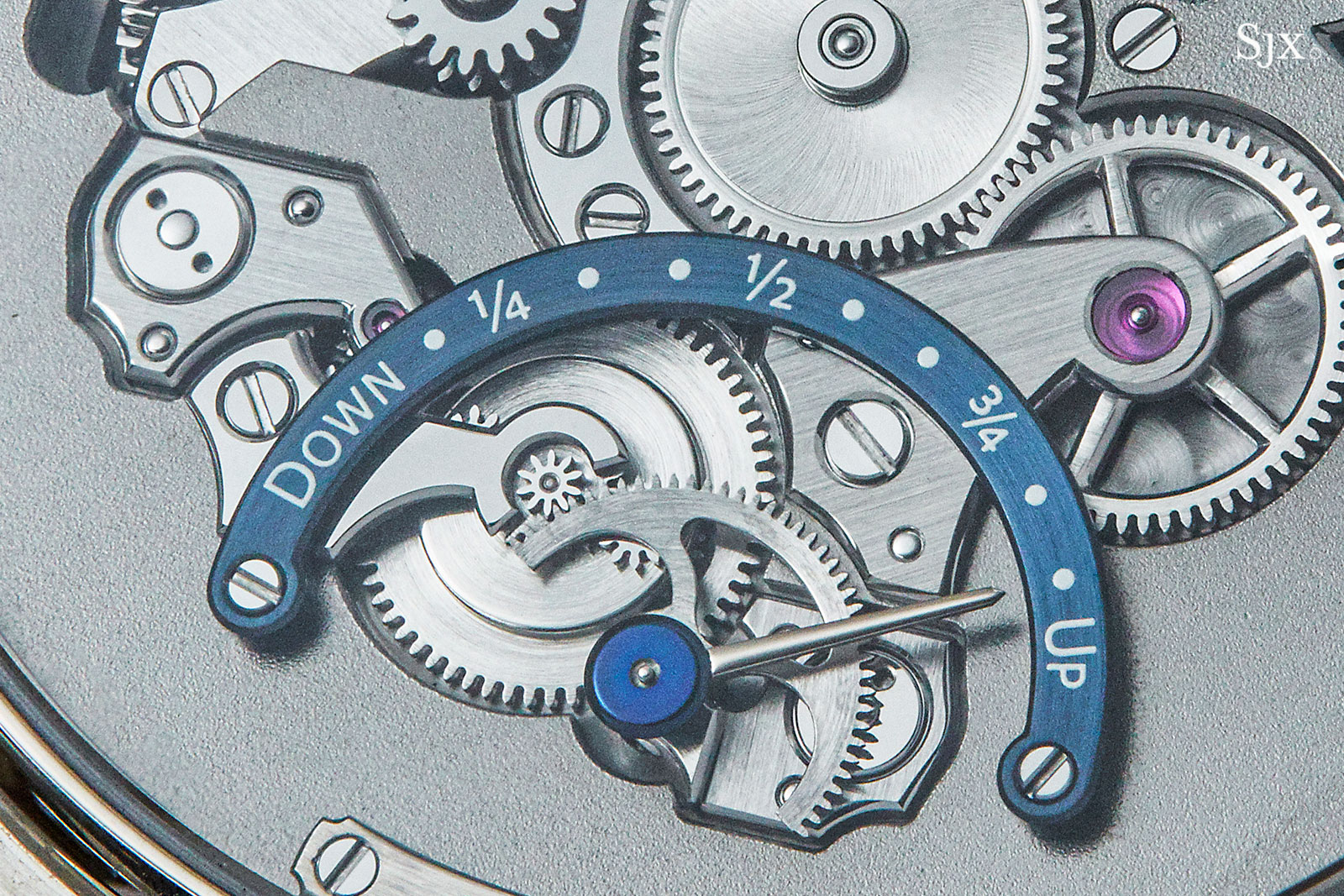 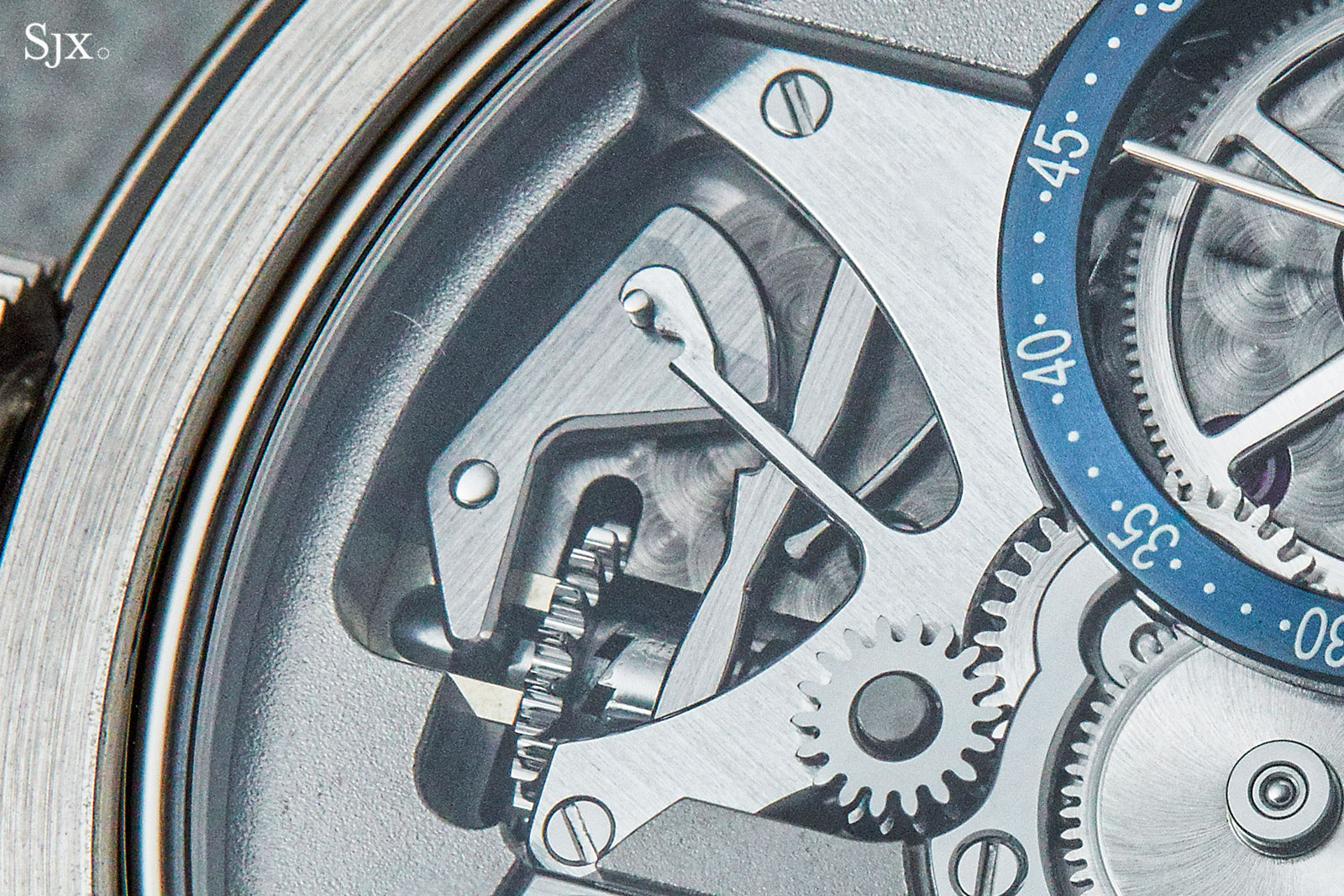 The keyless works that are both robust and refined 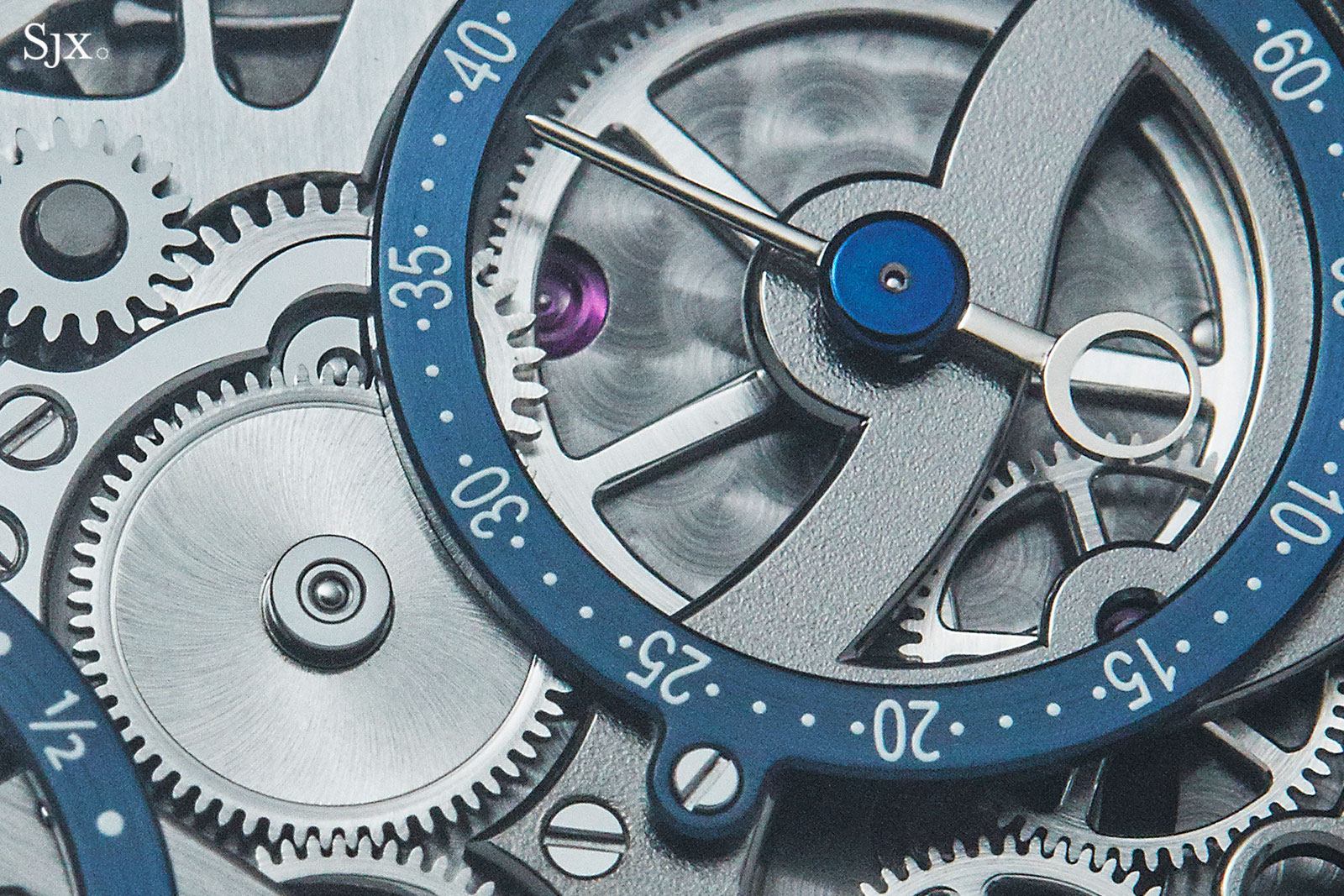 The 28TI demonstrates how far Mr Voutilainen has taken the vertical integration of his production, which indicates his talents not just as a watchmaker but also an entrepreneur.

The titanium case is made in-house by Voutilainen, or more specifically one of its group companies, Voutilainen & Cattin. Though this watch has no dial, the chapter rings on the front and back are made by Comblémine, a versatile specialist that produces guilloche and enamel dials and is yet another of the Voutilainen enterprises. 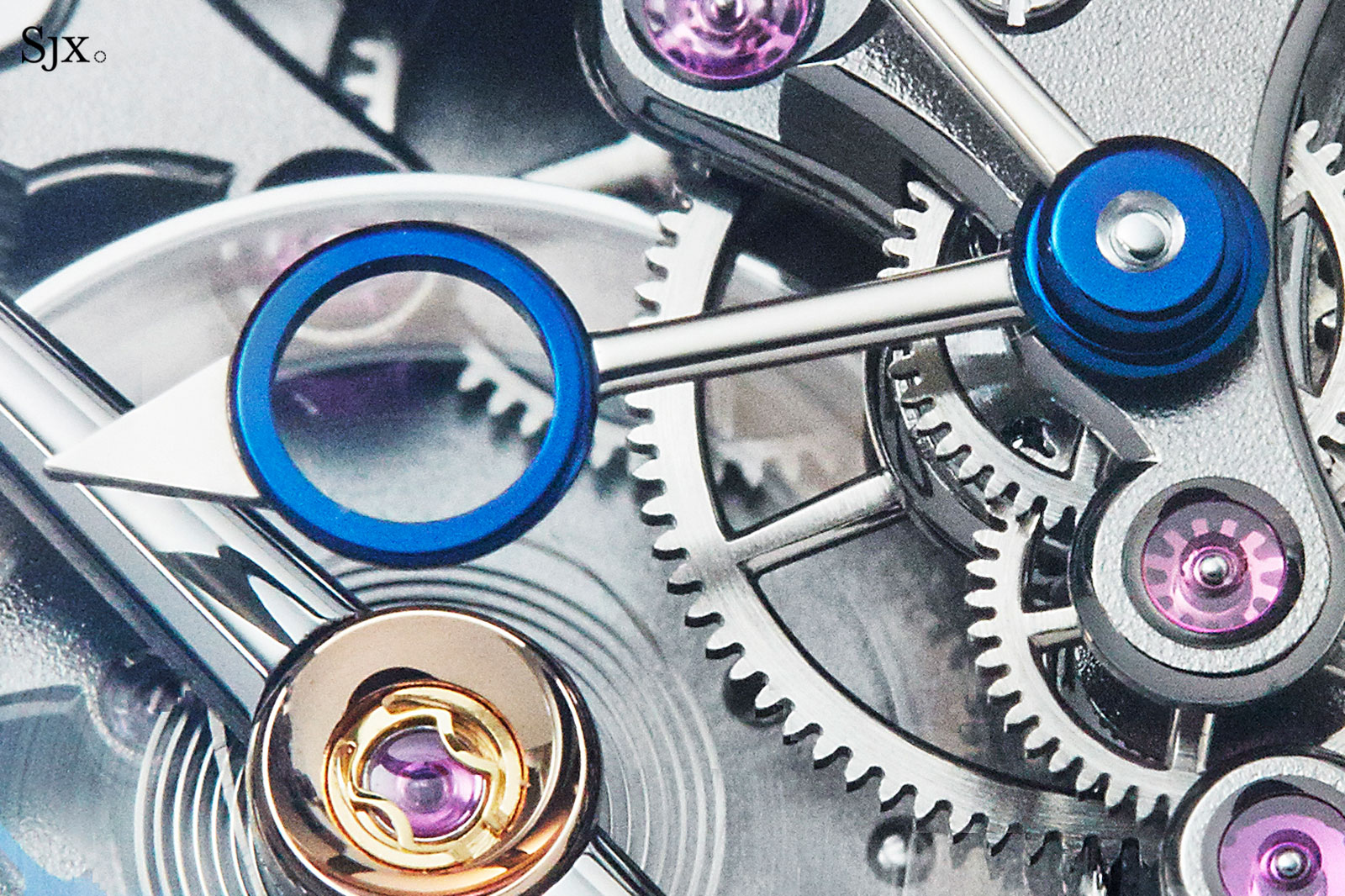 Well executed as it is, the 28TI tries too hard to be different, at least for my taste. That being said, for someone who finds the standard Vingt-8 boring, then this is the ideal – the same quality with more flamboyant design.

Although the 28TI in titanium, as pictured here, has already sold out, there are more iterations to come, as is the norm for Voutilainen. Expect it in different case materials, and also varied movement finishes.

Movement: Cal. 28 inverted
Functions: Hours and minutes on the front, seconds and power reserve on the back
Winding: Hand-wound

The Voutilainen 28TI as pictured is a limited edition of eight, priced at 86,000 Swiss francs.

It’ll also be available in platinum, priced at 98,000 francs, and the dense, grey-blue metal tantalum, which will be the most expensive at 118,000 francs.