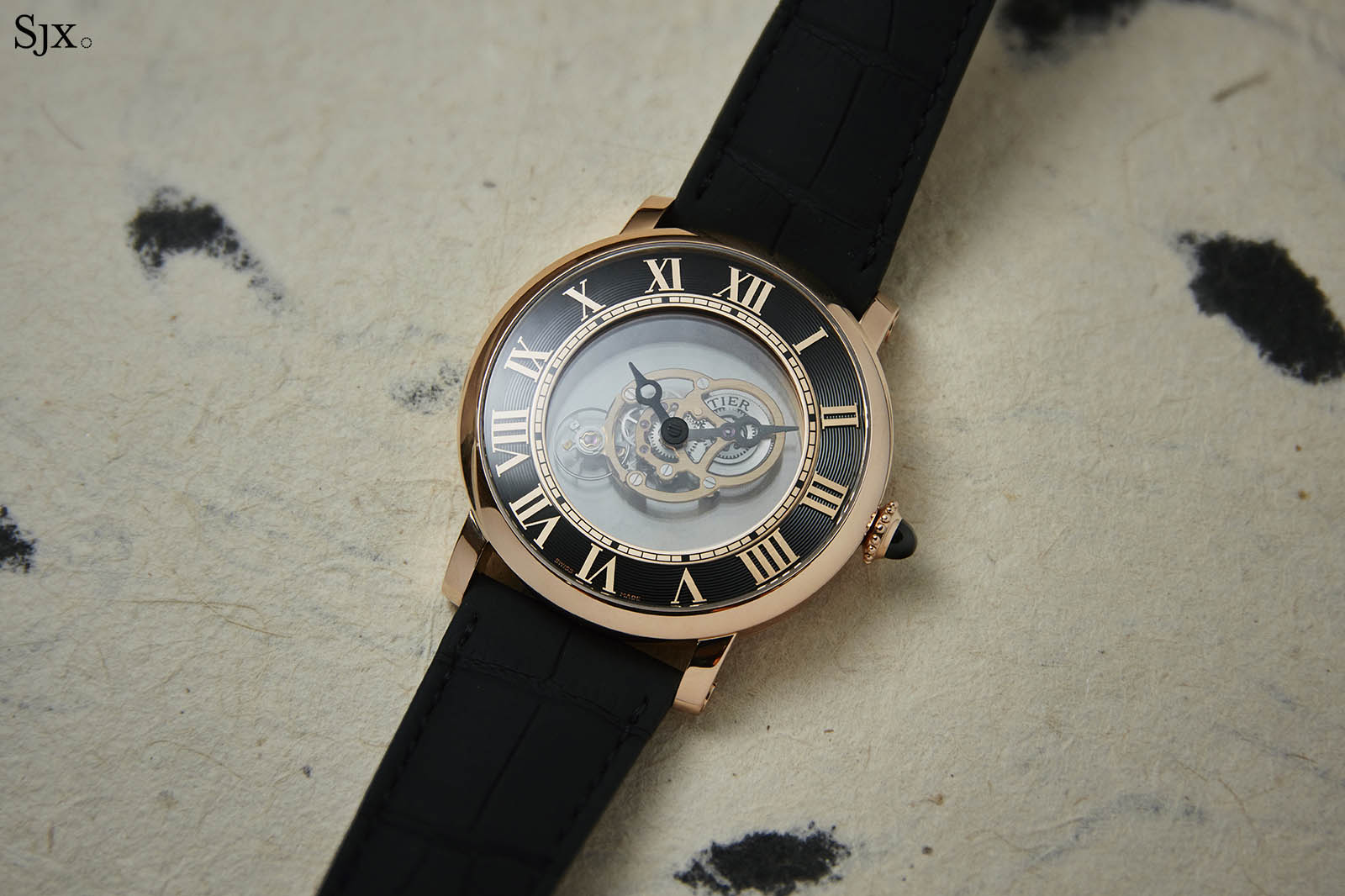 In 2016, Cartier unveiled one of the most dramatic examples of an orbital regulator – the Astromysterieux – in which the entire movement was suspended in the oculus of the watch dial, mysteriously unencumbered by any visible support. The Astromysterieux sits in the same class of exotic regulators as the Ulysse Nardin Freak, Piaget Tourbillon Relatif, and Jean Dunand Tourbillon Orbital – and unsurprisingly, three of the four were conceived by the same watchmaker.

Previously only available in palladium, the brand has now introduced a striking pink gold version with a black guilloche chapter ring. The dimensions of the watch remain unchanged – 43.5mm in diameter with a thickness of just 12mm, making it one of the thinnest, most elegant watches with such an unusual regulator. 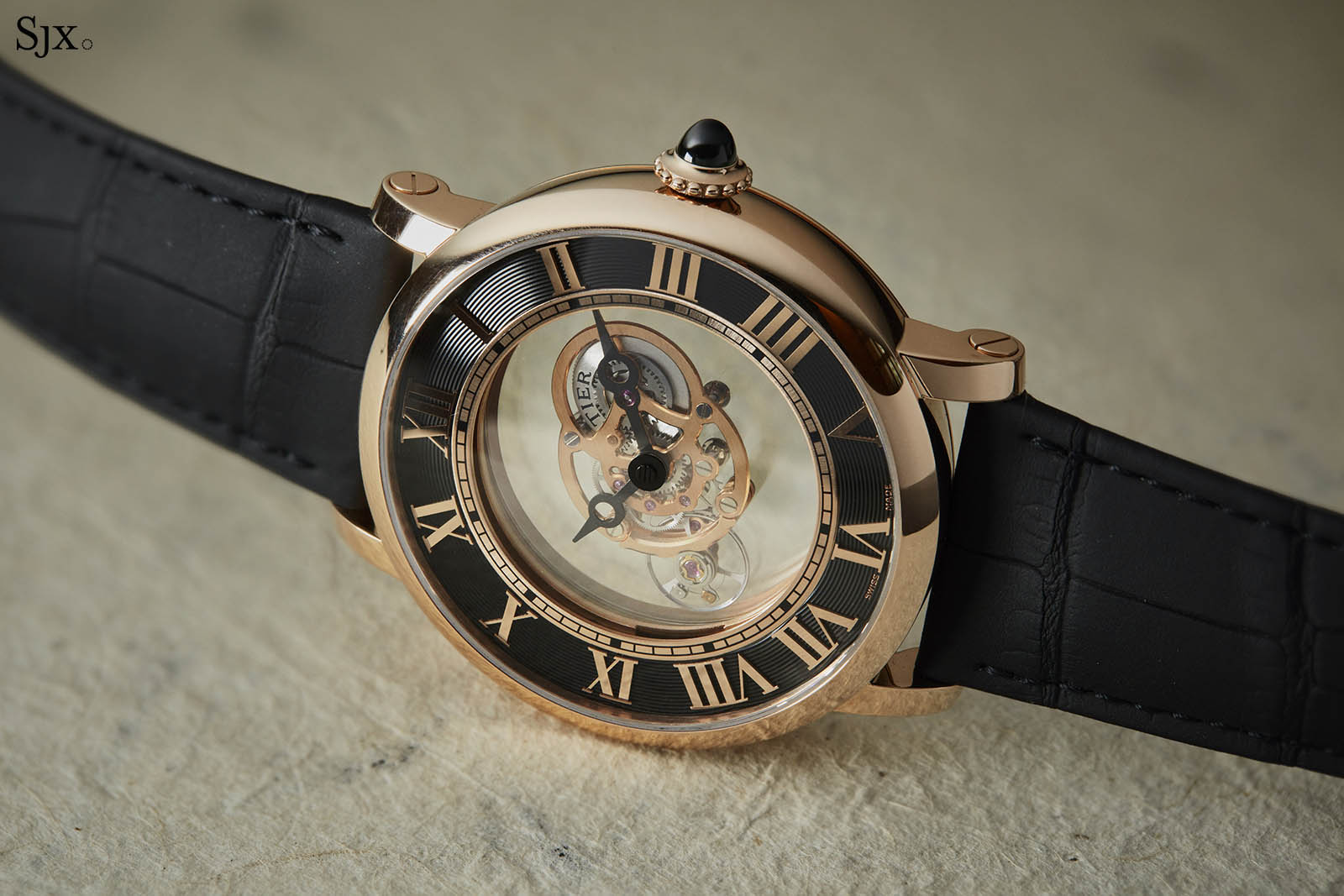 But the true brilliance of the watch lies in the ingenious cal. 9462 MC, for which three patents were filed.

The secret to the floating, mysterious movement is in the invisible gearing that is hidden behind the chapter ring. The movement is essentially baguette-shaped, with the minute hand fixed to the barrel bridge, and completes a full rotation on the dial in an hour.

The basic idea of a tourbillon is to install the escapement in a mechanically driven platform in order to create a single, average rate in all vertical positions – in short, to average out gravitational errors.

But in the modern era of luxury watchmaking, the tourbillon, more than anything, aims to offer a visual spectacle. A handful of watches that have squared that visual effect, most commonly by incorporating additional axes of rotation into the tourbillon.

While a classical tourbillon rotates on its own axis, usually making a full rotation every 60 seconds, watchmakers have found more theatrical ways of presenting the tourbillon.

The first and arguably more common iteration puts the cage in orbit around the central axis of the watch, creating hence a double or triple (or bi-axial and tri-axial) tourbillon. Recent examples of orbital tourbillons include the Jacob & Co. Astronomia and the Antoine Preziuso Chronometer Tourbillon of Tourbillons. The second iteration puts the entire movement in orbit, creating a central tourbillon, which in rare cases is also combined with a traditional tourbillon such as the Ulysse Nardin Freak Diavolo.

Both of which were the product of what surely must be one of the most creative horological minds of our time – Carole Forestier-Kasapi, a virtuoso movement designer who stimulated the birth of the Freak and also designed the Piaget Tourbillon Relatif. She continued to explore the concept of moving escapements with her work with Cartier where she designed the Astrotourbillon and subsequently the Mysterious Double Tourbillon.

In the Astrotourbillon, the escapement and balance are mounted on the extreme tip of a carrousel tourbillon cage that revolves around the central axis of the dial once a minute. The balance thus acts as the seconds hand of the watch.

The Mysterious Double Tourbillon, on the other hand, operates on the same principle as Cartier’s original mystery clocks in which a sapphire disc is fitted with a toothed rim that meshes with the gears of the movement. The tourbillon cage makes one revolution per minute while the sapphire disc, on which the cage is mounted, rotates once every five minutes, hence there are two axes.

The Astromysterieux, however, takes things to a different level in terms of conception, execution and effect. It is, much like the Freak, a central carrousel tourbillon as the movement is, in effect, the minute hand. 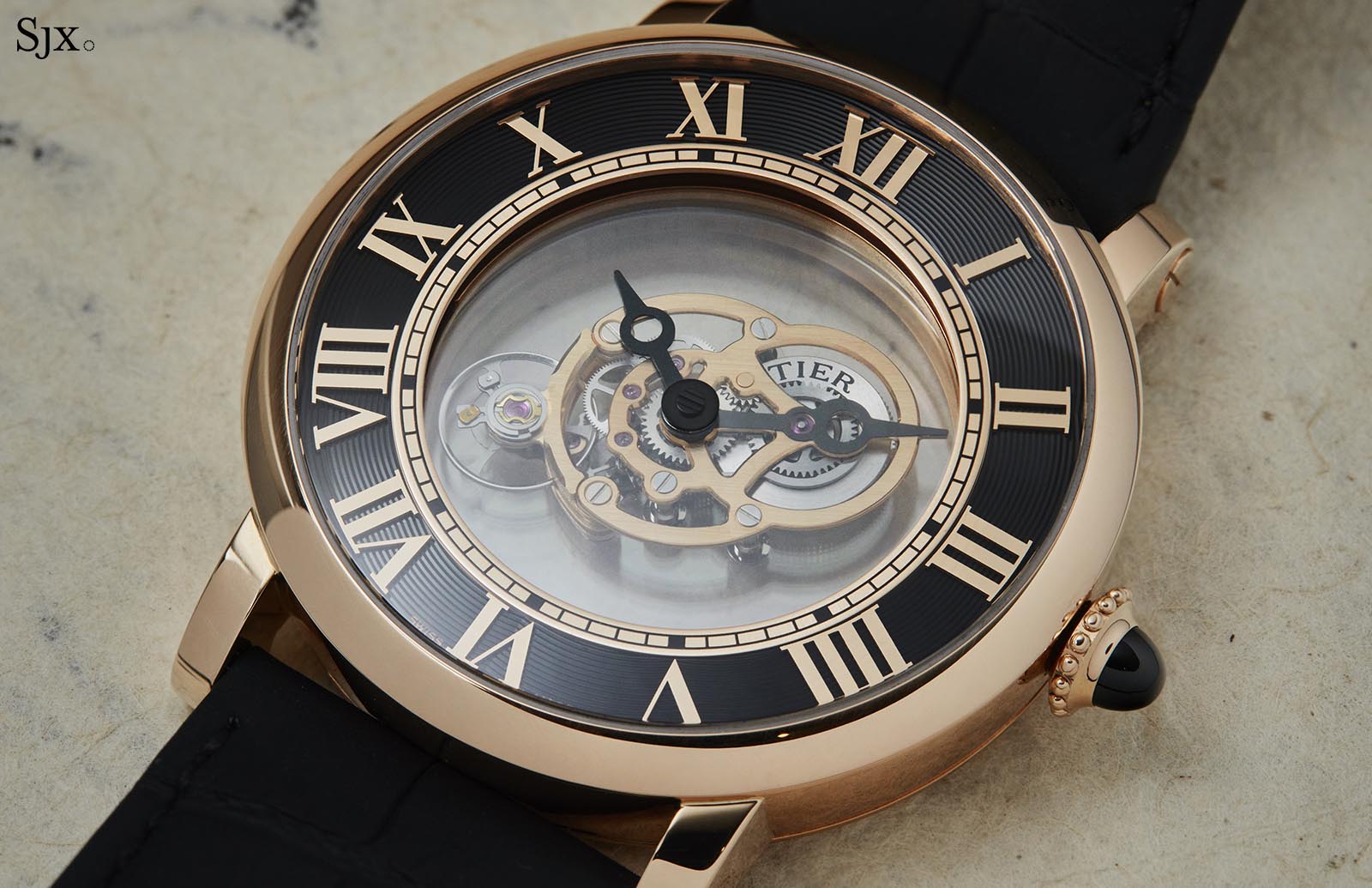 However, unlike the Freak where an enormous mainspring, which forms the base of the movement and occupies the caseback, is required to ensure sufficient power to drive the time display, the entire movement here, including the mainspring barrel revolves on an axis point and completes one rotation every hour, making it the first of its kind. As such, it required a completely different configuration. 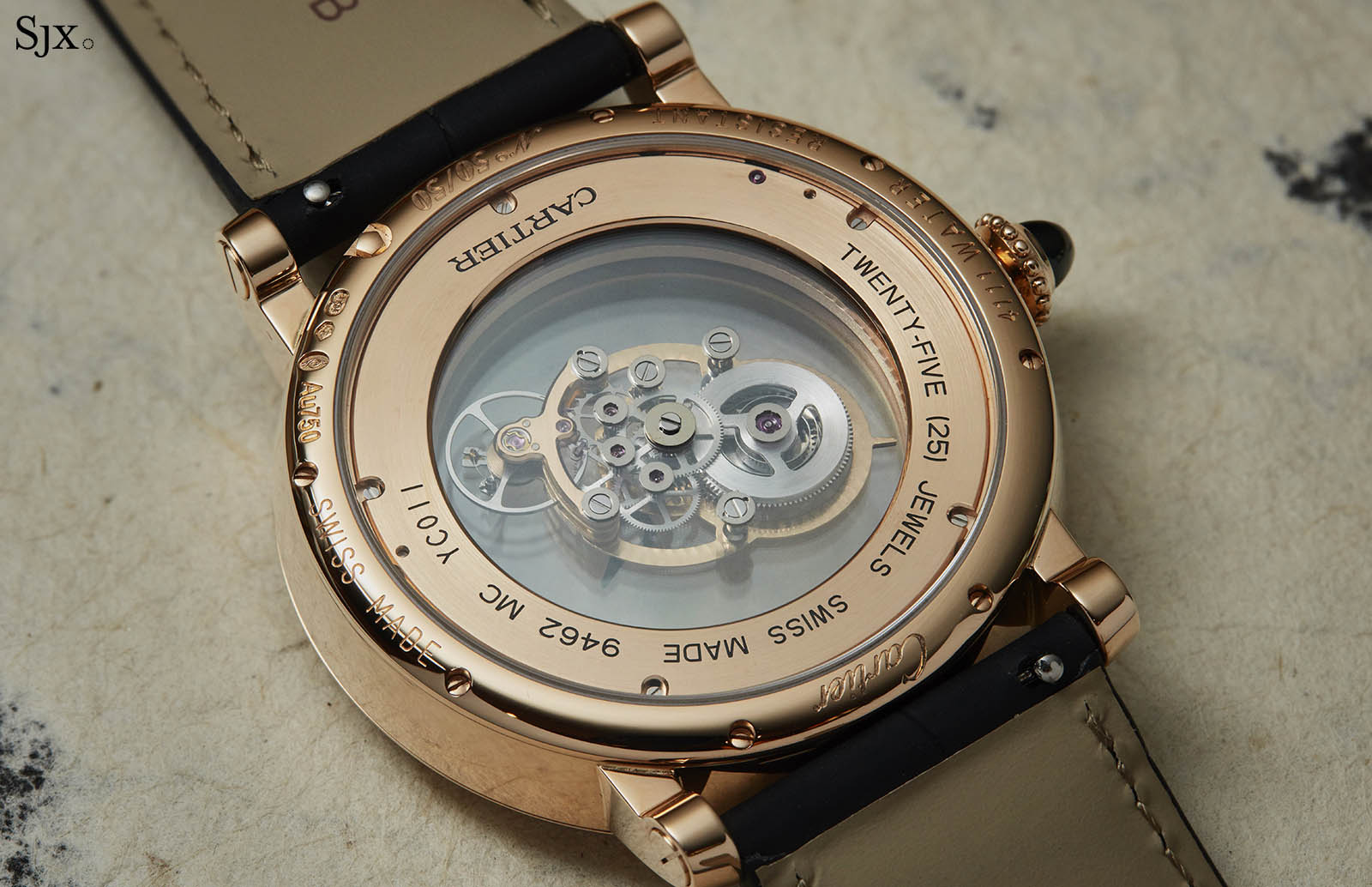 The entire movement is suspended and supported by a structure made up of four stacked sapphire discs, each for the hours, minutes, winding system, as well as time-setting respectively.

The hour hand is mounted on the top disc while the rest of the movement – the gear train, the barrel, the escapement and the balance wheel along with the minute hand fixed atop the bridge – are fitted on the second disc. Then the third disc is driven by a unique winding mechanism with a floating pinion that facilitates two crown functions. 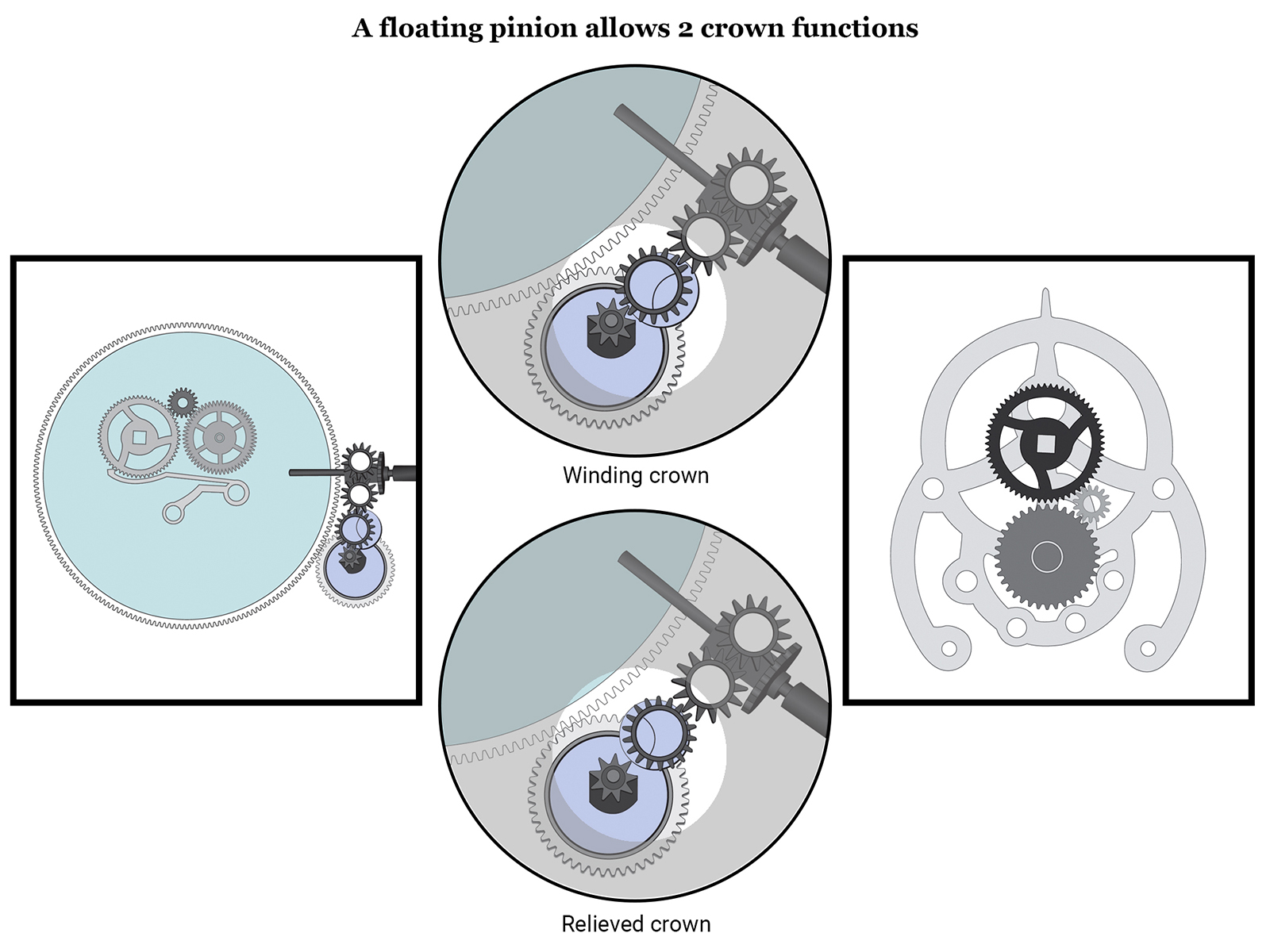 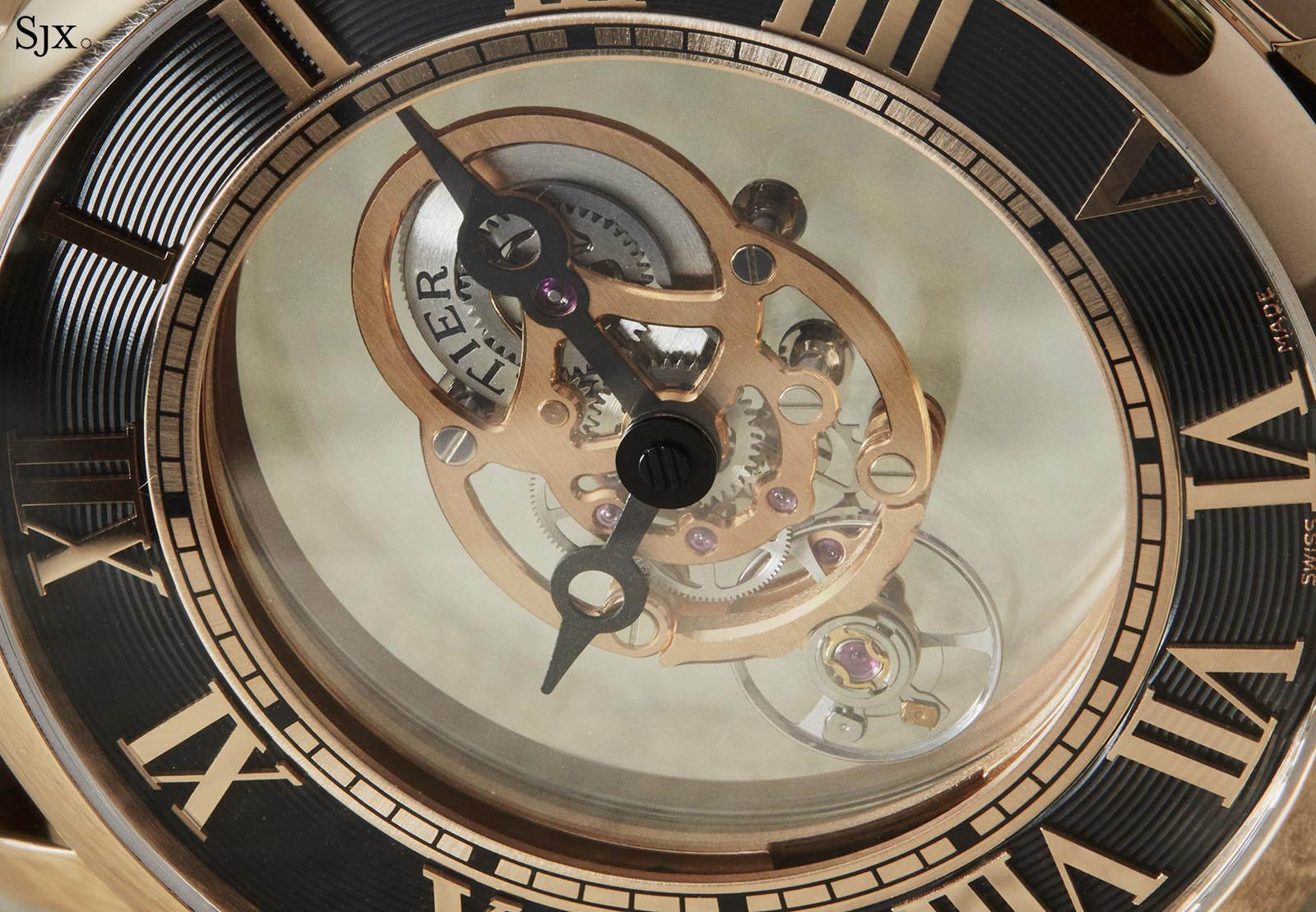 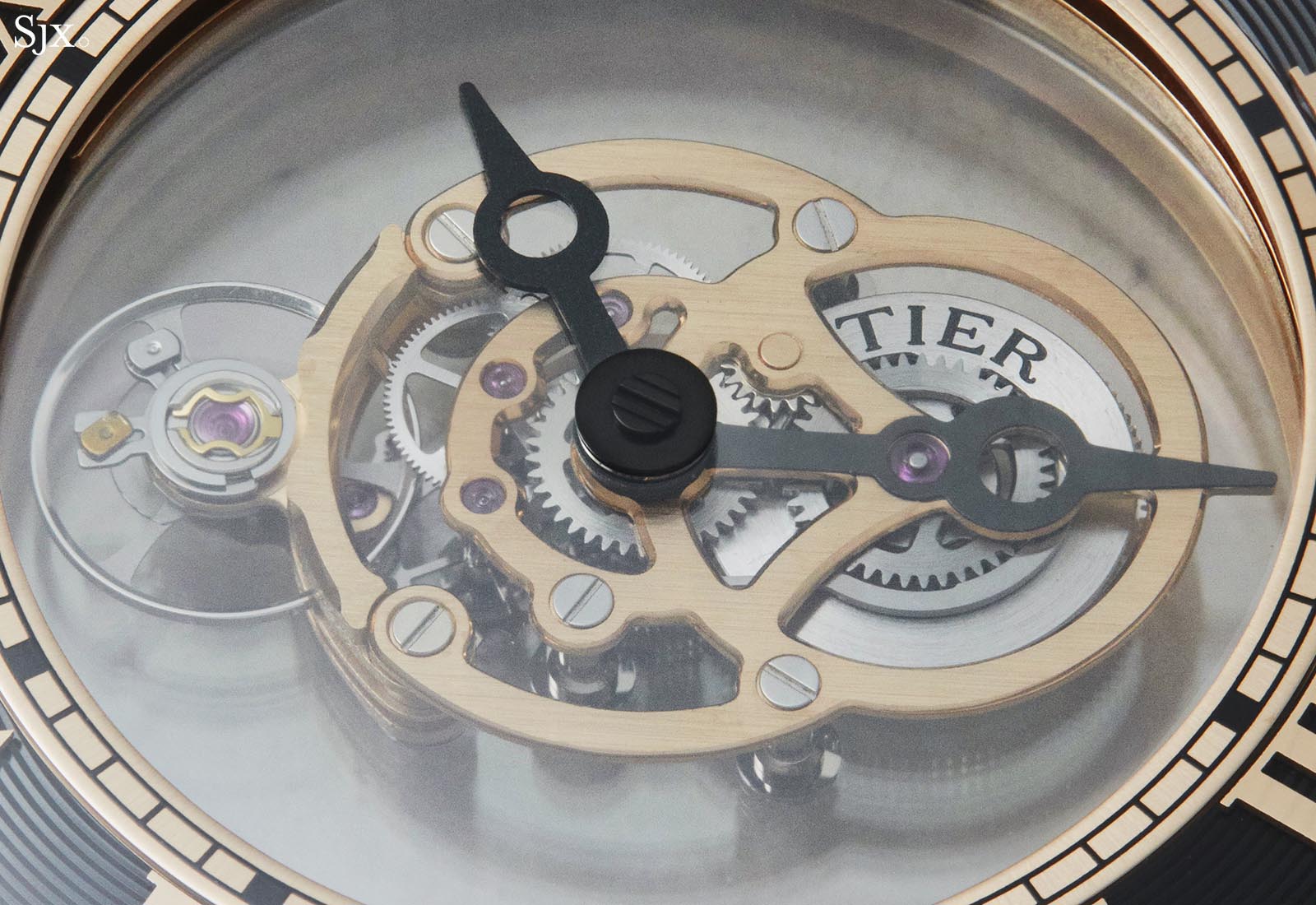 The crown automatically engages the third disc when it is turned for winding. But once released, a floating pinion disengages with the winding disc to protect the movement from damage. When the crown is wound, the third disc meshes with the gears on the second disc, which holds the mainspring barrel.

Further in, the fourth disc, which is located at the base of the movement, serves a dual role. A fixed center wheel is mounted on the fourth disc to act as the tourbillon rotation point when the watch is operating normally.

But once the crown is pulled out, it engages the time-setting system, which is the subject of a second patent. It allows the entire movement to be rotated including the fixed wheel, without simply driving the first and second disc around the fixed wheel. In other words, it rotates in synch with the movement. 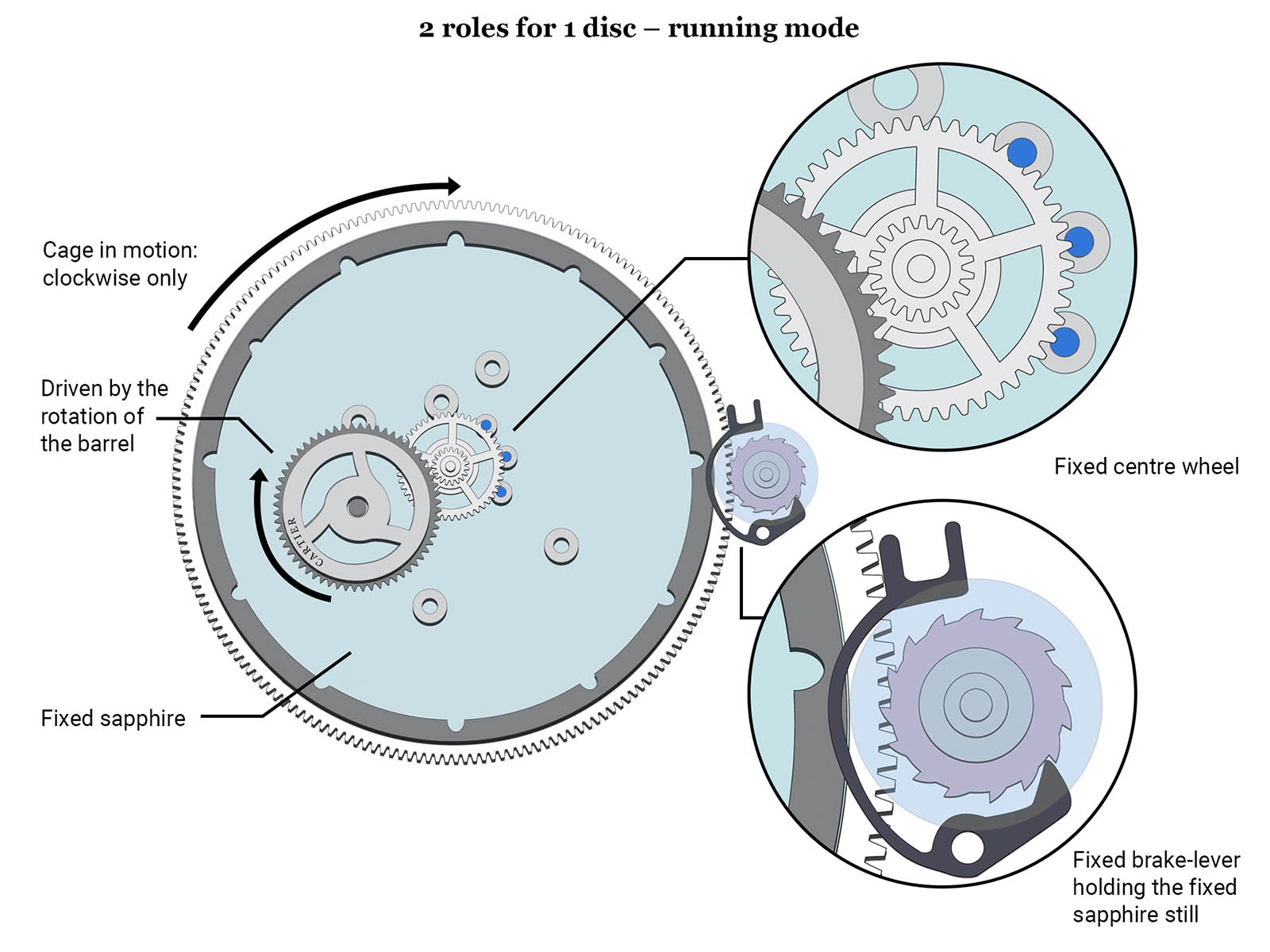 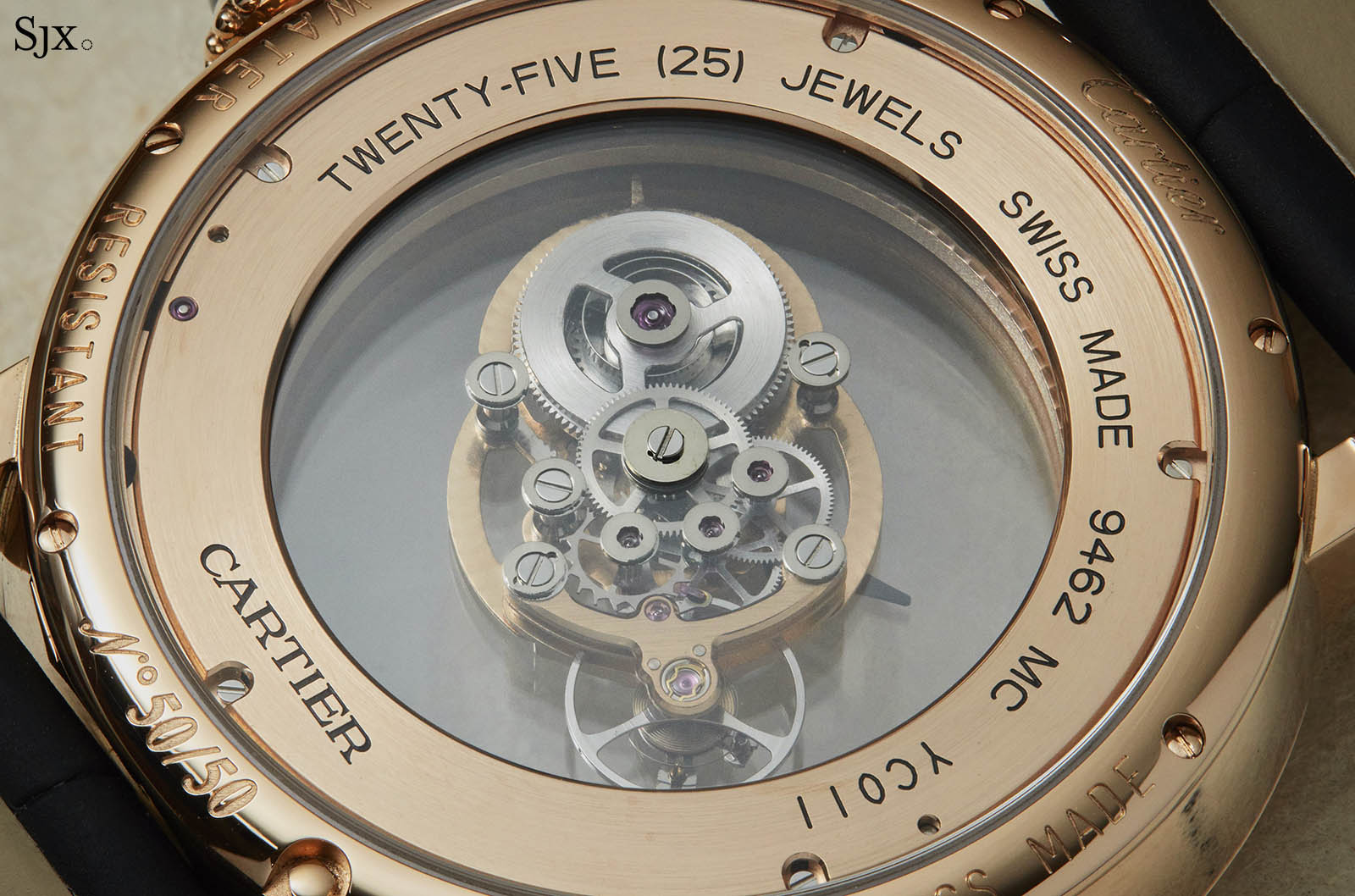 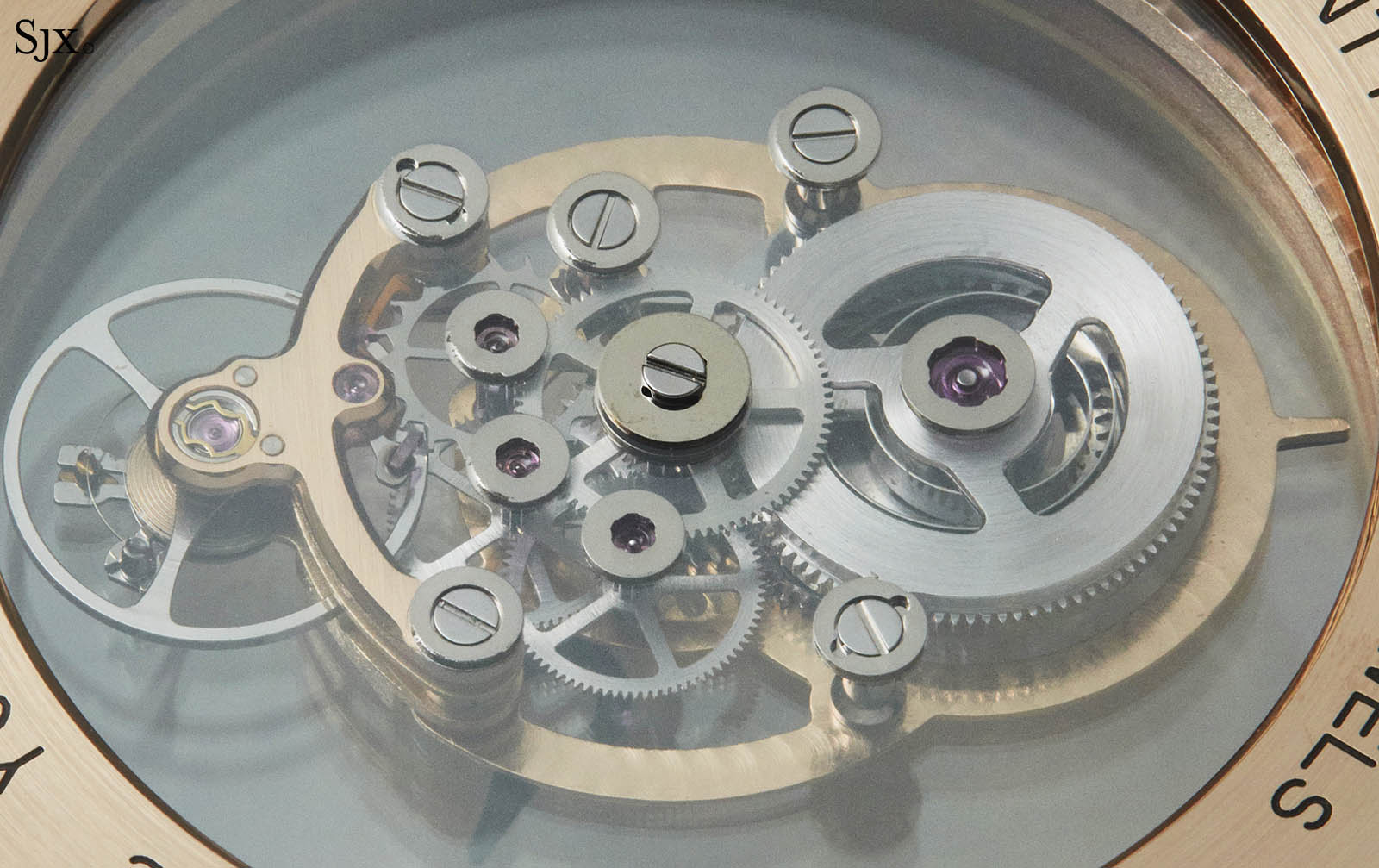 When the crown is pushed back in and the fourth disc is secured into position, the mainspring unwinds and thus continuing the rotation of the movement around the fixed wheel.

All of the above would not be possible if not for a specially designed lever, for which another patent was filed. This lever blocks the fourth disc during the normal operations of the watch. When the crown is pulled out to the time-setting position, the lever releases the fourth disc, consequently freeing the rotating tourbillon cage on which the minutes wheel is mounted, and so allowing the time to be adjusted. 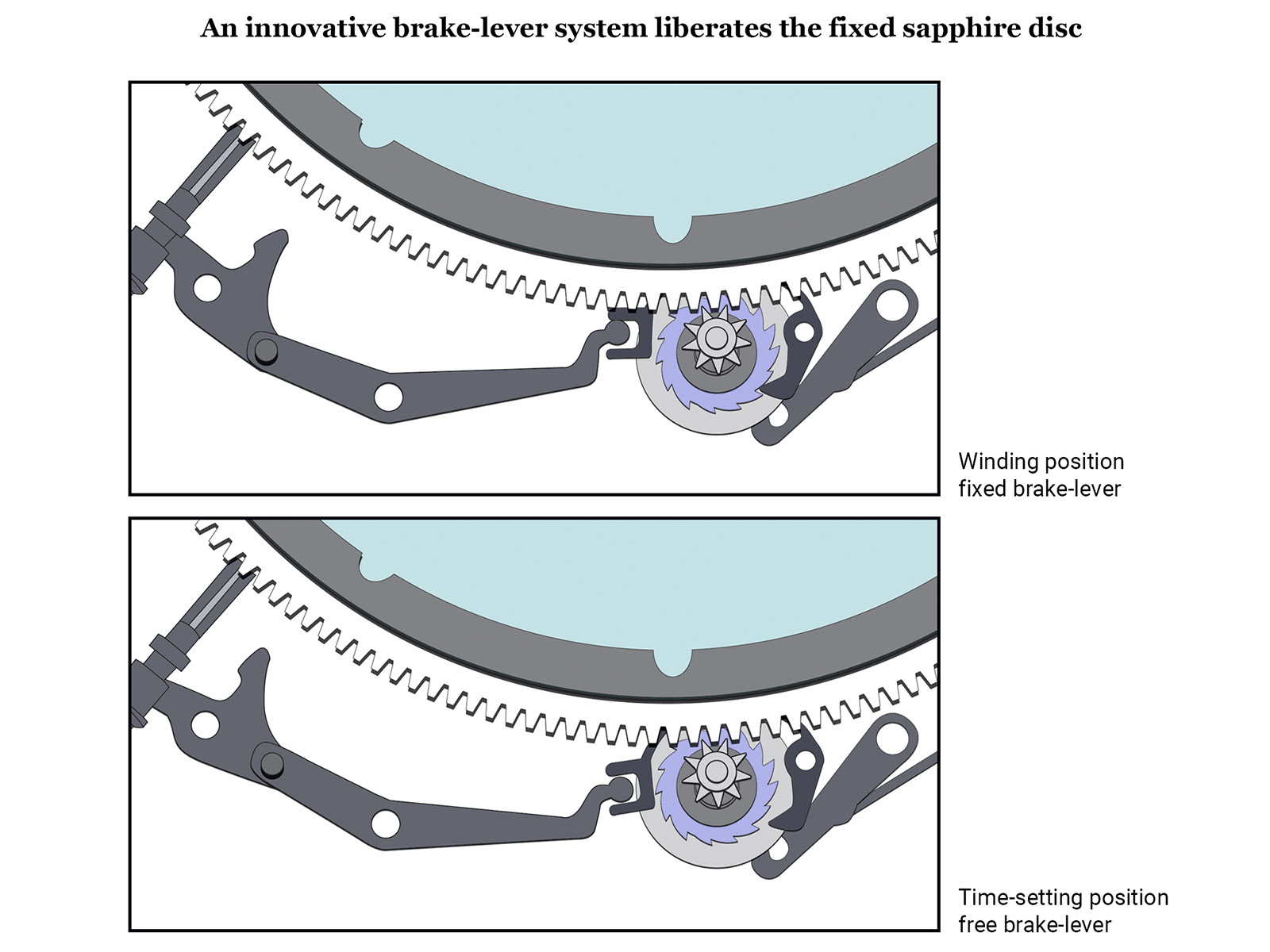 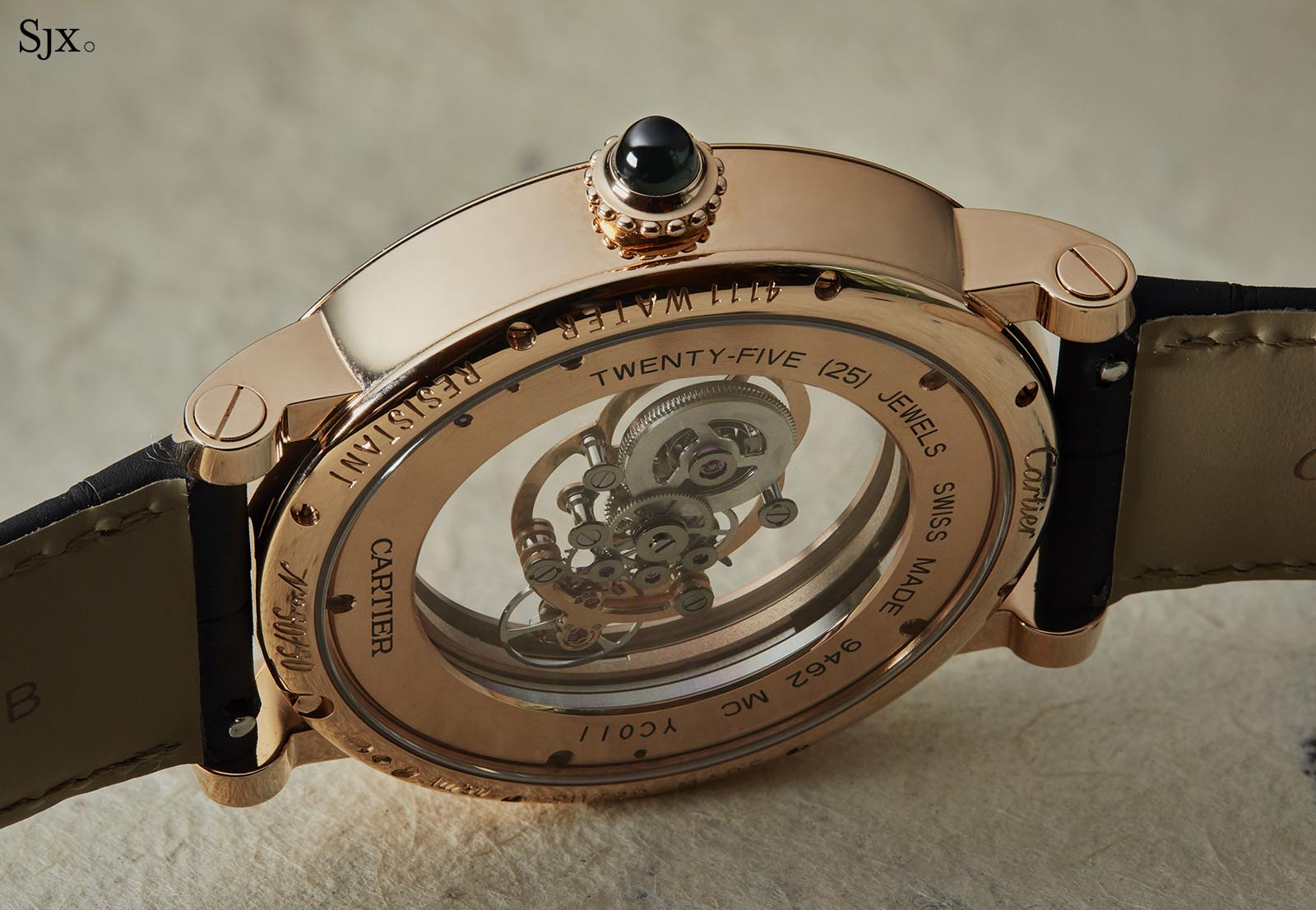 The cal. 9462 MC is made up of 408 parts, including 188 ball-bearings and 25 jewels. A shock-absorbing system attached to the rotating cage was designed, protecting it against exernal impacts while the watch is being worn.

Most watches with orbital escapements tend to result in aesthetically charged, ultra-progressive designs by virtue of their mechanical dynamism. But the Astromysterieux remains one of the only exceptions, as its complexity, in turn, results in a beguiling simplicity. In short, it is this conceptual refinement that sets it apart in an already elusive genre.

The Rotonde de Cartier Astromysterieux in pink gold is a limited edition of 50 pieces and is priced at 167,000 Swiss francs, or 232,000 Singapore dollars.