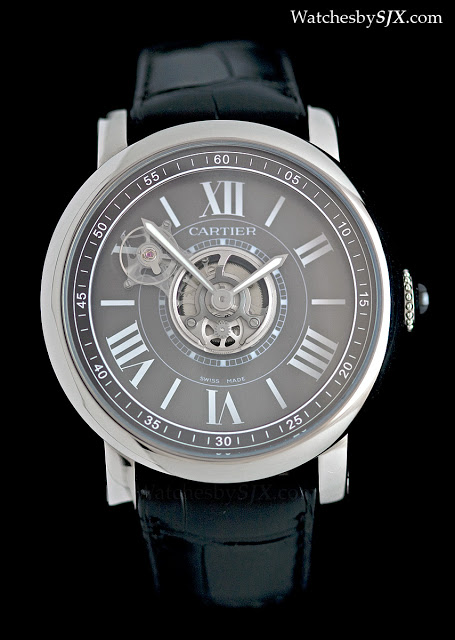 Using the innovations developed for the ID One concept watch, the Astrotourbillon Carbon Crystal is the first production timepiece from Cartier equipped with a lubrication-free escapement. In 2009 Cartier unveiled the ID One, the first timepiece in its ID series of concept watches which experiment with technologies that might be the future of watchmaking. The ID One was entirely lubrication- and regulation-free thanks to the use of materials new to watchmaking, but it was a concept watch and never commercialised.  Some of the innovative materials, however, used in the ID One have made their way into the Astrotourbillon Carbon Crystal. The result is the first, and so far only, production Cartier timepiece with a lubrication free escapement. Launched last year, the Astotourbillon Carbon Crystal is only just being delivered.

Both the escape wheel and pallet fork are lubrication free, thanks to the hardness of diamond, which has a Vickness hardness of about 10,000 (sapphire crystal on the other hand is about 2300). That hardness gives the functional surfaces of the pallet fork and escape wheel a coefficient of friction of 0.04, which is about a quarter of the value for these components in steel. That same property means that the tourbillon bridge has no jewels, since the pivots can sit in apertures formed directly in the carbon crystal bridge. And the pivots are tungsten carbide inside ADLC-coated steel tubes, which are self-lubricating.

The intricate form of the carbon crystal bridge is possible due to the Deep Reactive-Ion Etching (DRIE) process used to etch the bridge as well as the escape wheel and pallet fork. This process results in tolerances of a micron, meaning that all the carbon crystal parts are perfectly formed.

Consequently, not only is the escapement lubrication-free, every tooth of the escape wheel is perfectly formed and requires no finishing. Likewise the pallet fork is one piece, avoiding errors in alignment which can happen with conventional anchors with ruby pallets.

The Astrotourbillon Carbon Crystal is only dipping a toe in the water, being the first production watch with these novel materials. The rest of the movement, including the balance wheel and hairspring, is conventional. That means the balance wheel needs poising and the gear train needs lubrication, as with a regular watch.

But the Astrotourbillon Carbon Crystal points the way to the future of watchmaking at Cartier, as more of the practical innovations from the ID series make their way into production timepieces.