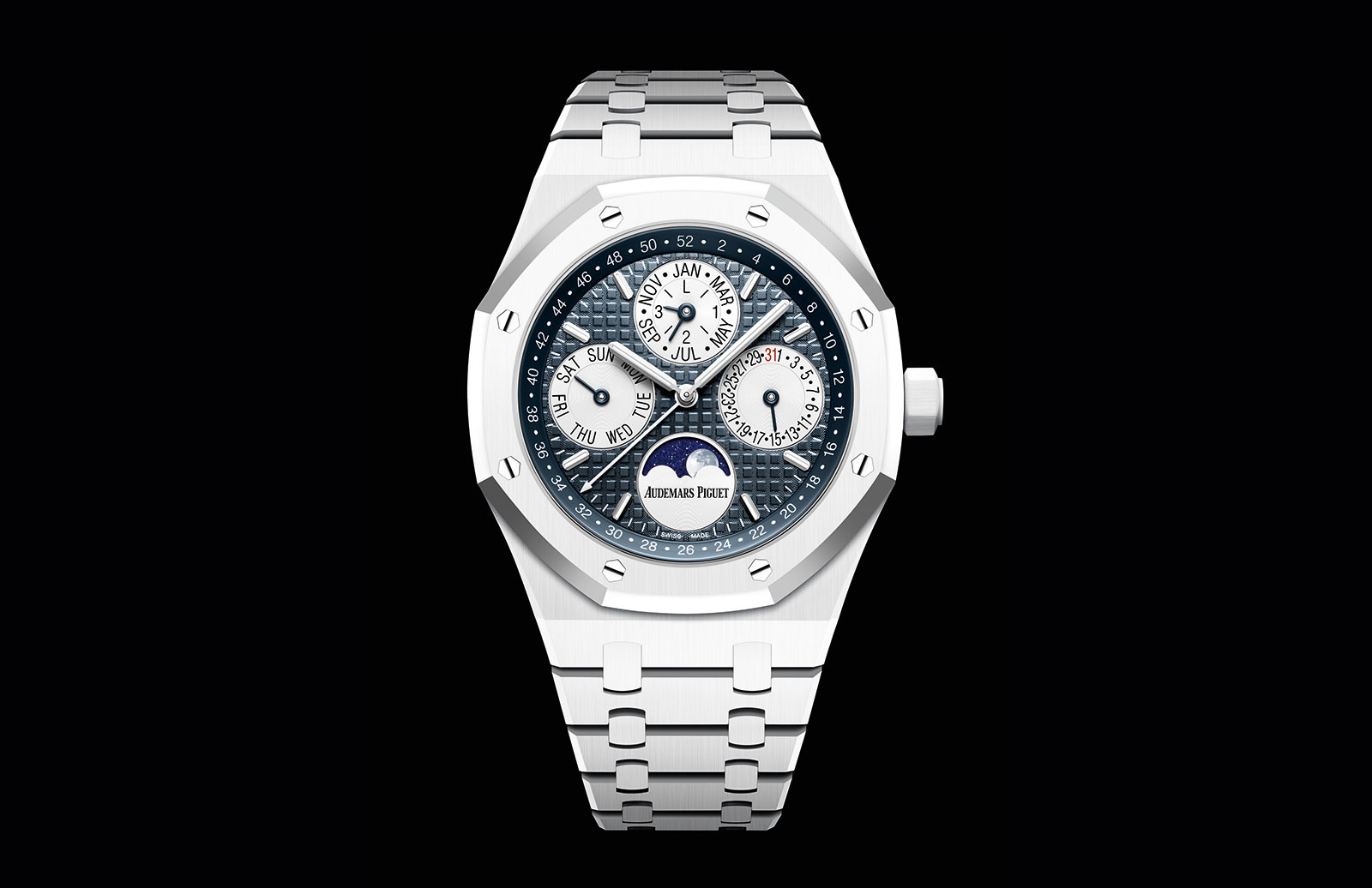 One of the worst kept secrets at Audemars Piguet this year is also one of its most anticipated new launches: the Royal Oak Perpetual Calendar in white ceramic.

As it was with the Royal Oak perpetual in black ceramic unveiled in 2017, the new watch has both its case and bracelet in ceramic that’s been finished exactly as it is on the metal versions of the model. So the top surfaces of the white ceramic are brushed, while the bevelled edges are mirror polished. 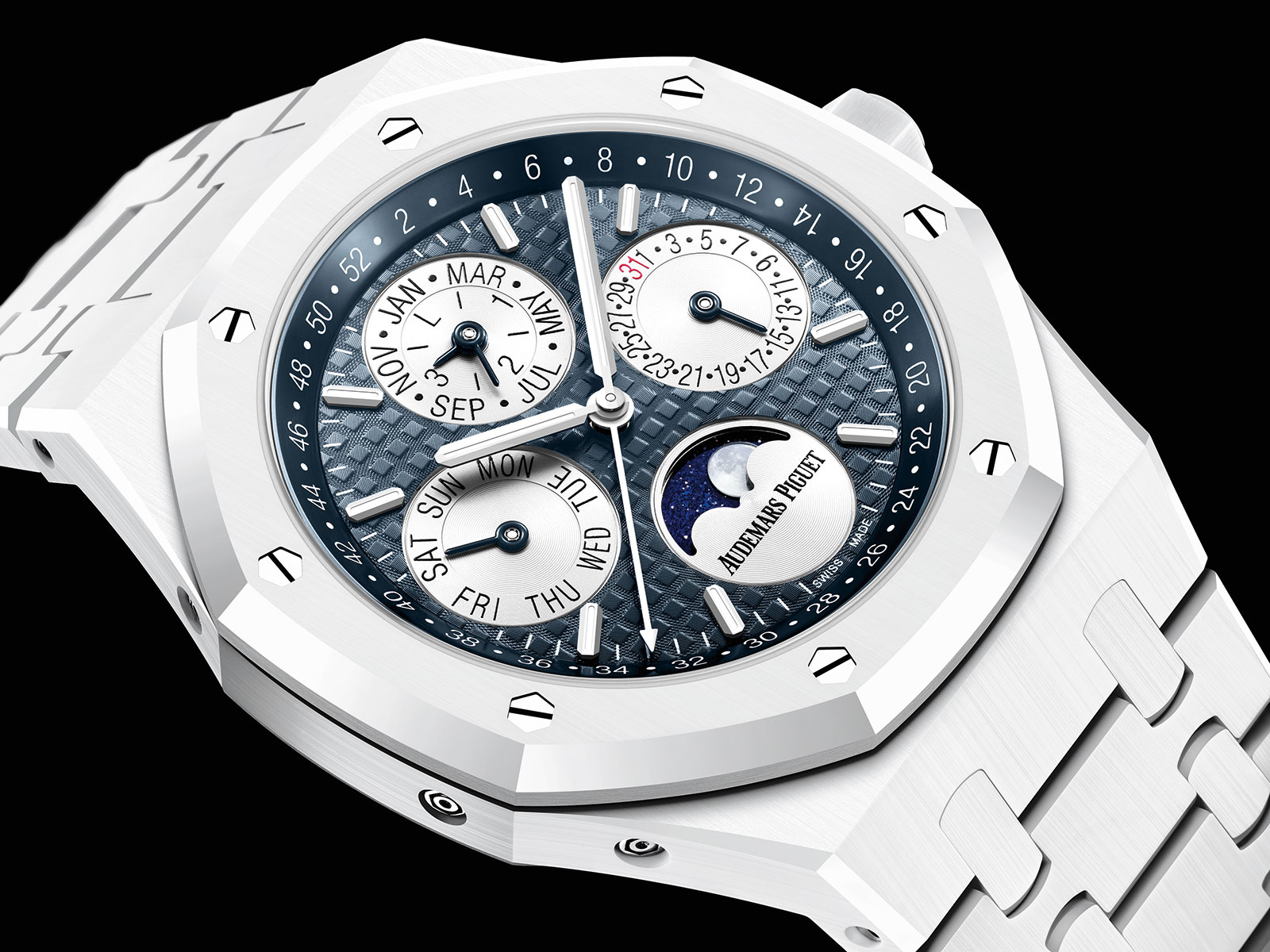 Because of the structure of material, the white ceramic is not quite pure white, but a faintly pearlescent shade. The ceramic case is 41mm in diameter and 9.5mm high, exactly the same as the steel or gold versions of the watch.

The white ceramic is paired with a dark blue dial decorated with the Royal Oak’s trademark tapisserie guilloche that is essentially a miniature chequerboard pattern. The sub-dials are silver, while the hands are made of 18k white gold. 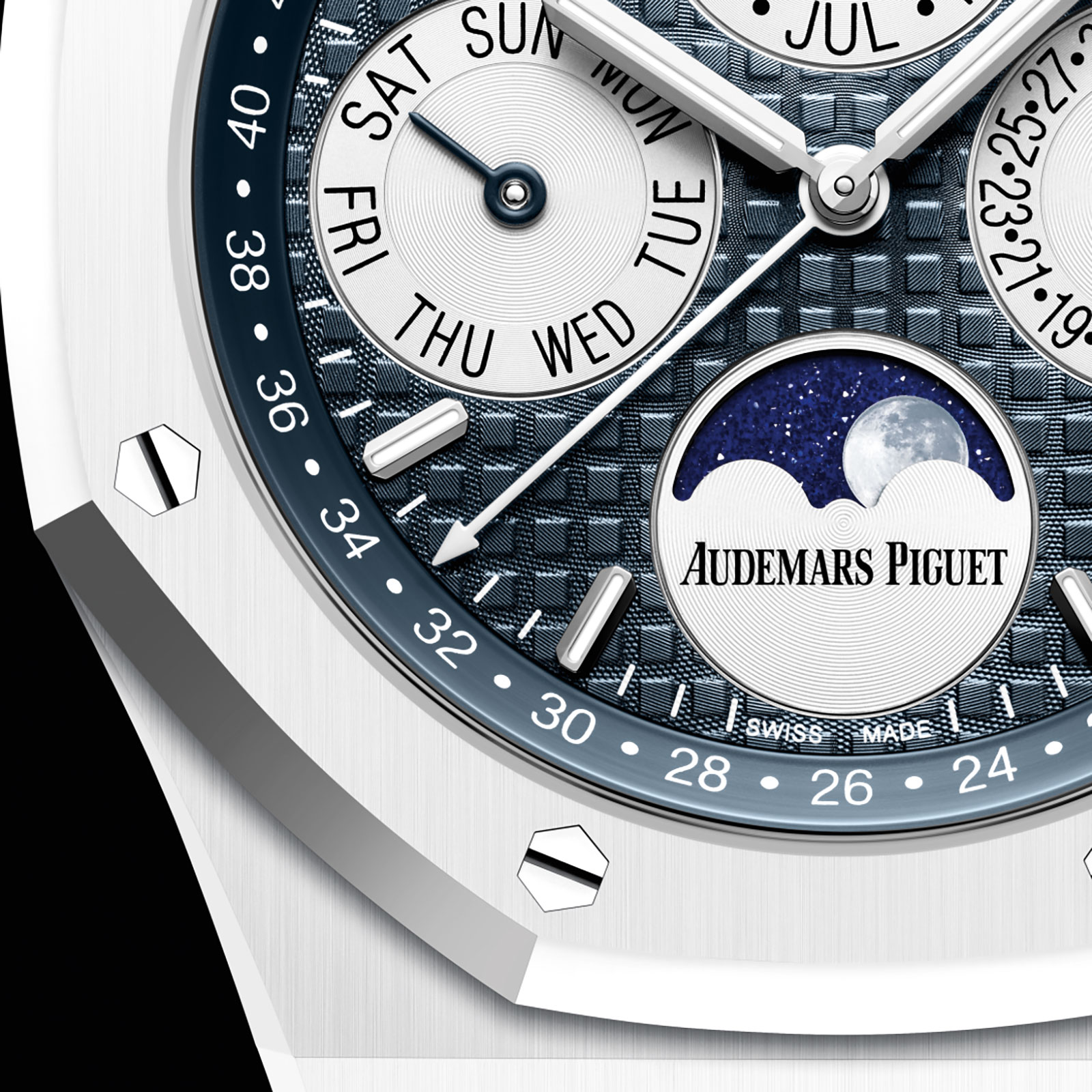 Mechanically the watch is identical to the standard Royal Oak Perpetual Calendar. It’s powered by the cal. 5134, which is the extra-thin automatic cal. 2120 topped with a perpetual calendar module. The calendar is unusual in having a week of the year display, indicated by a central hand along a track on the periphery of the dial. 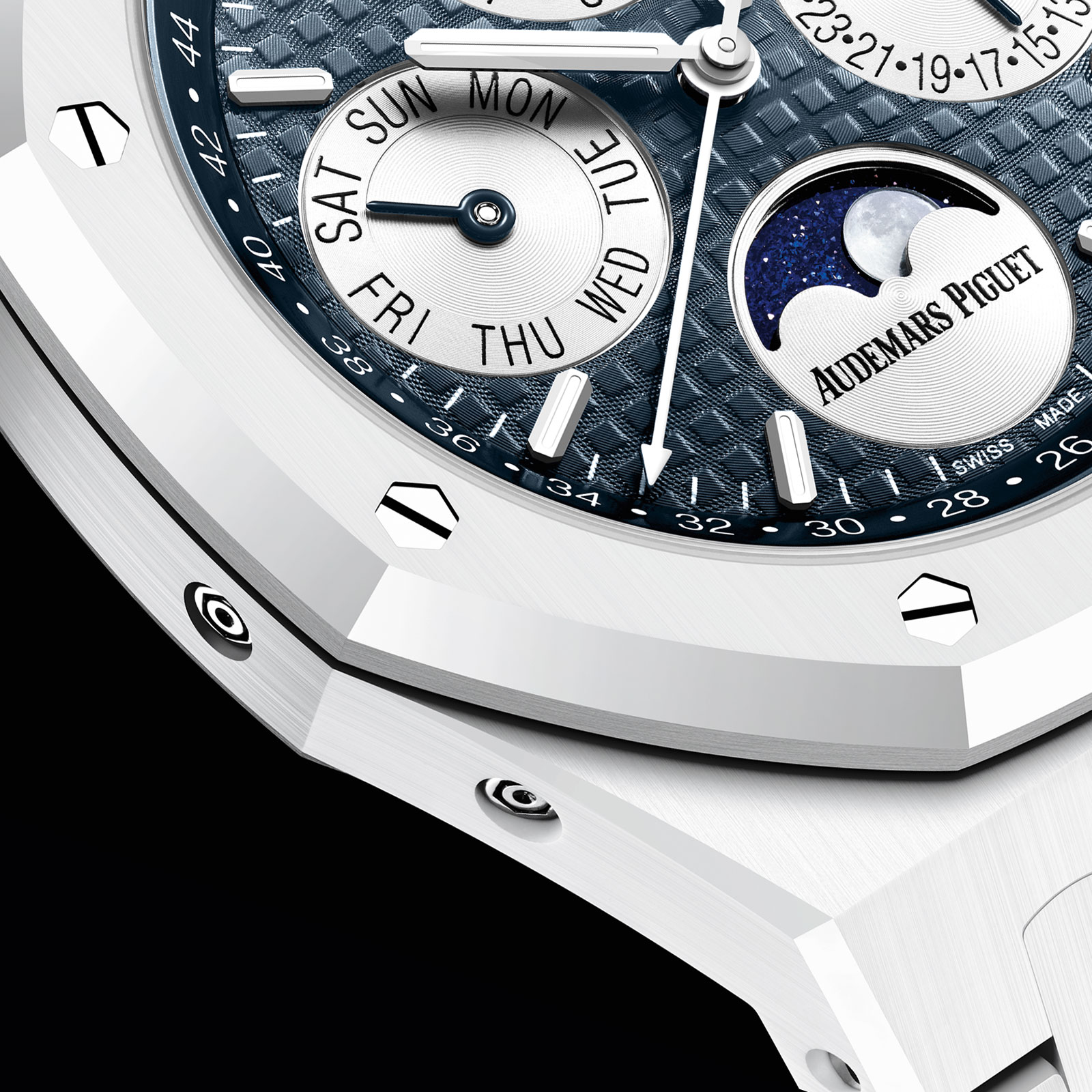 Though now produced in-house by Audemars Piguet, the cal. 2120 was originally the Jaeger-LeCoultre cal. 920, a super-slim, self-winding movement launched in 1967. JLC originally supplied the movement to Audemars Piguet, Patek Philippe and Vacheron Constantin, and it is best known for being found in both the original luxury sports watches, the Royal Oak ref. 5402 of 1972 and Nautilus ref. 3700 of 1976.

Word has it that Audemars Piguet will unveil another desirable watch powered by the same calibre later in the year, so stay tuned. 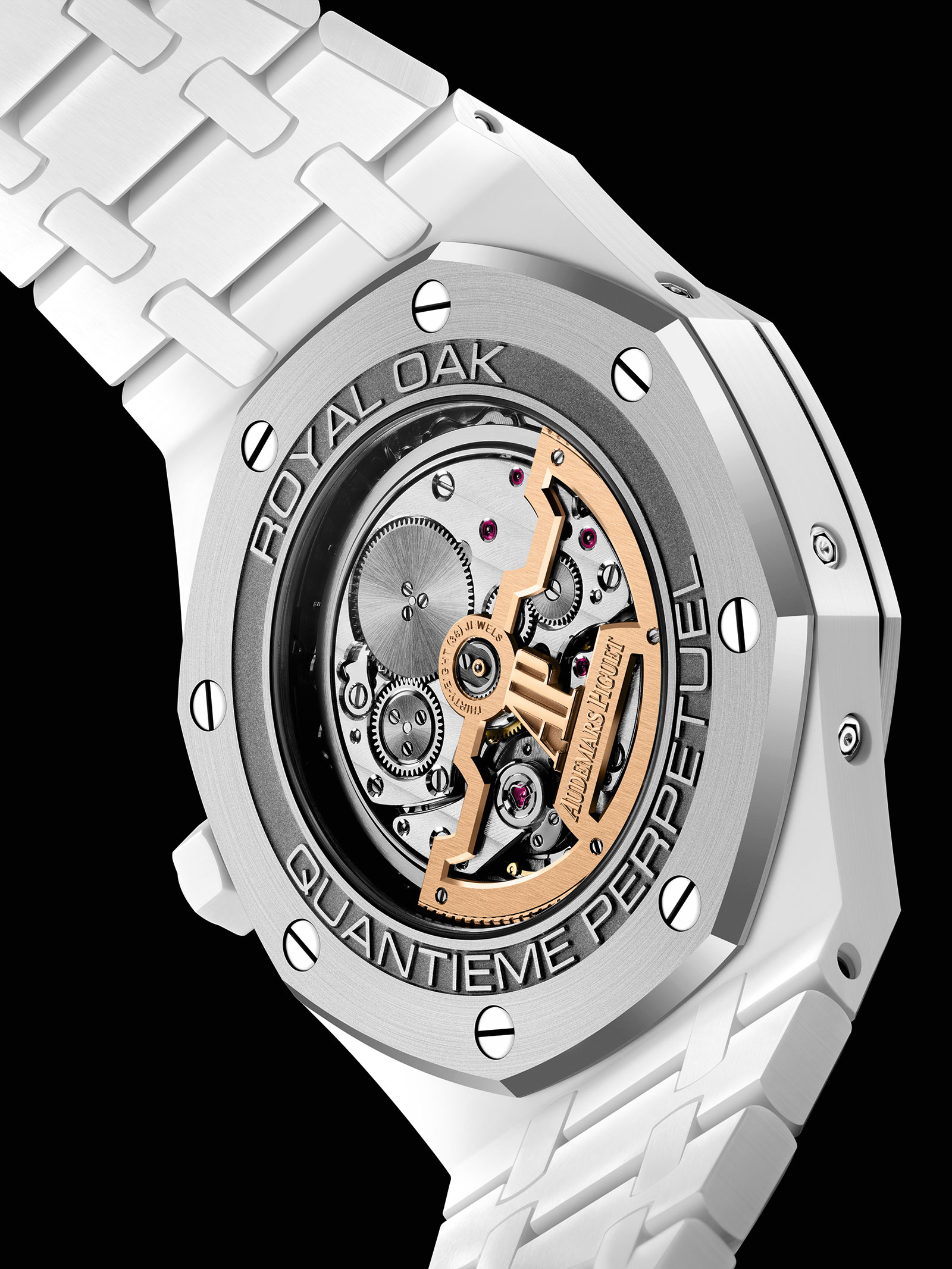