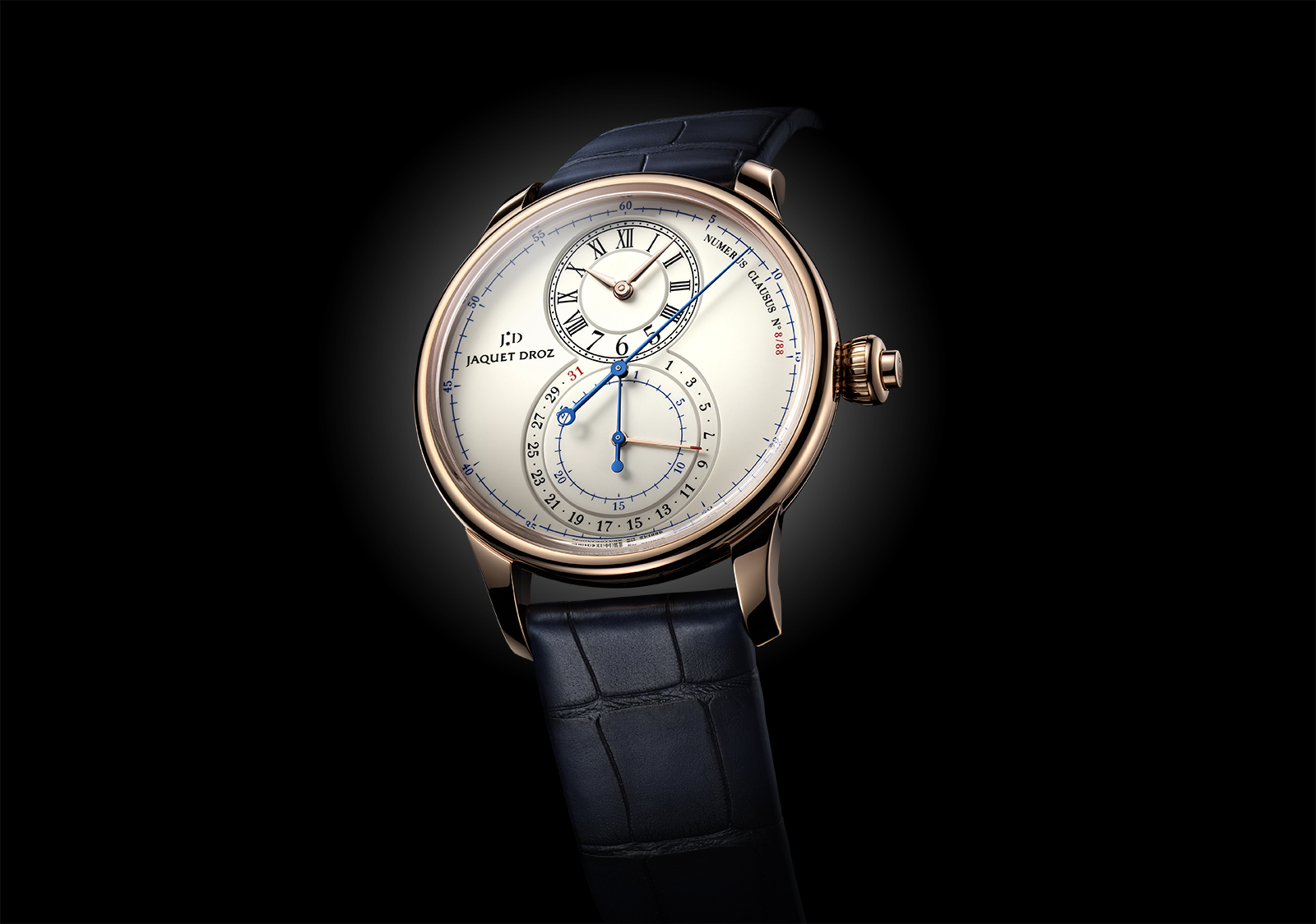 In addition to its delicately decorated and mechanically fascinating automatons, another hallmark of Jaquet Droz is the Grande Seconde, a wristwatch featuring an extra-large seconds counter based on a 19th-century pocket watch. While originally a time-only watch, the Grande Seconde has grown to incorporate various complications, including a deadbeat seconds, and now, a monopusher chronograph.

The brand recently took the covers off the Grande Seconde Chronograph, adapting the counters of a stopwatch to fit the signature aesthetic of the model, creating a surprisingly minimalist chronograph.

The collection is made of four watches – three regular production models in steel, plus a limited edition of 88 pieces in red gold with an ivory grand feu enamel dial. 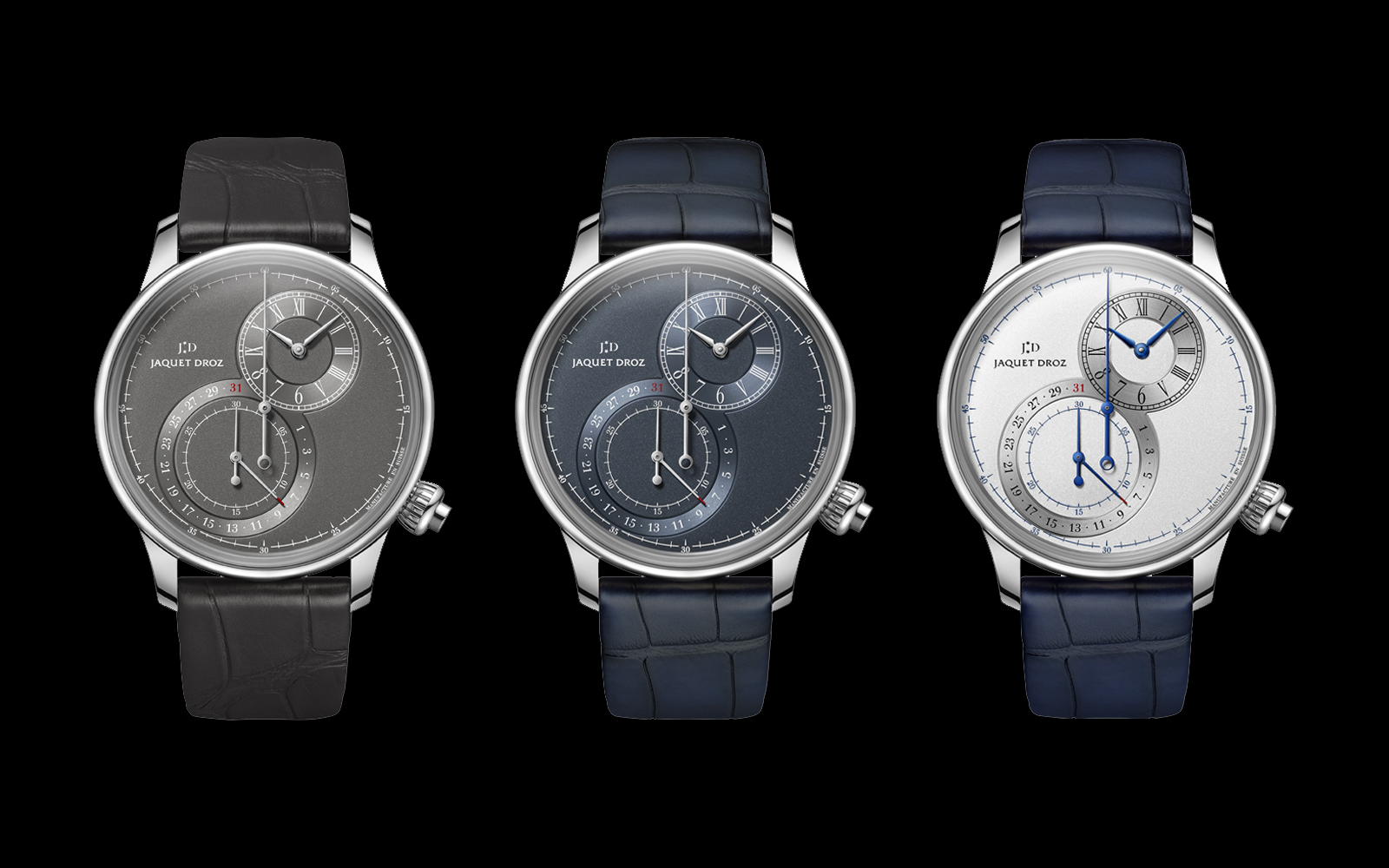 Each features trademark Grande Seconde figure-of-eight dial, but with the lower sub-dial dedicated to a co-axial sub-dial that combines the 30-minute resister and retrograde date.

All four models are 43mm in diameter and powered by the same movement, the cal. 26M5R.

It’s an automatic, single-button calibre with a column wheel and vertical clutch for the chronograph, as well as a silicon balance spring. And like most chronograph movements used by Jaquet Droz (and Blancpain), the calibre is based on the Frederic Piguet 1185 that’s now made by Blancpain, but substantially customised for Jaquet Droz. 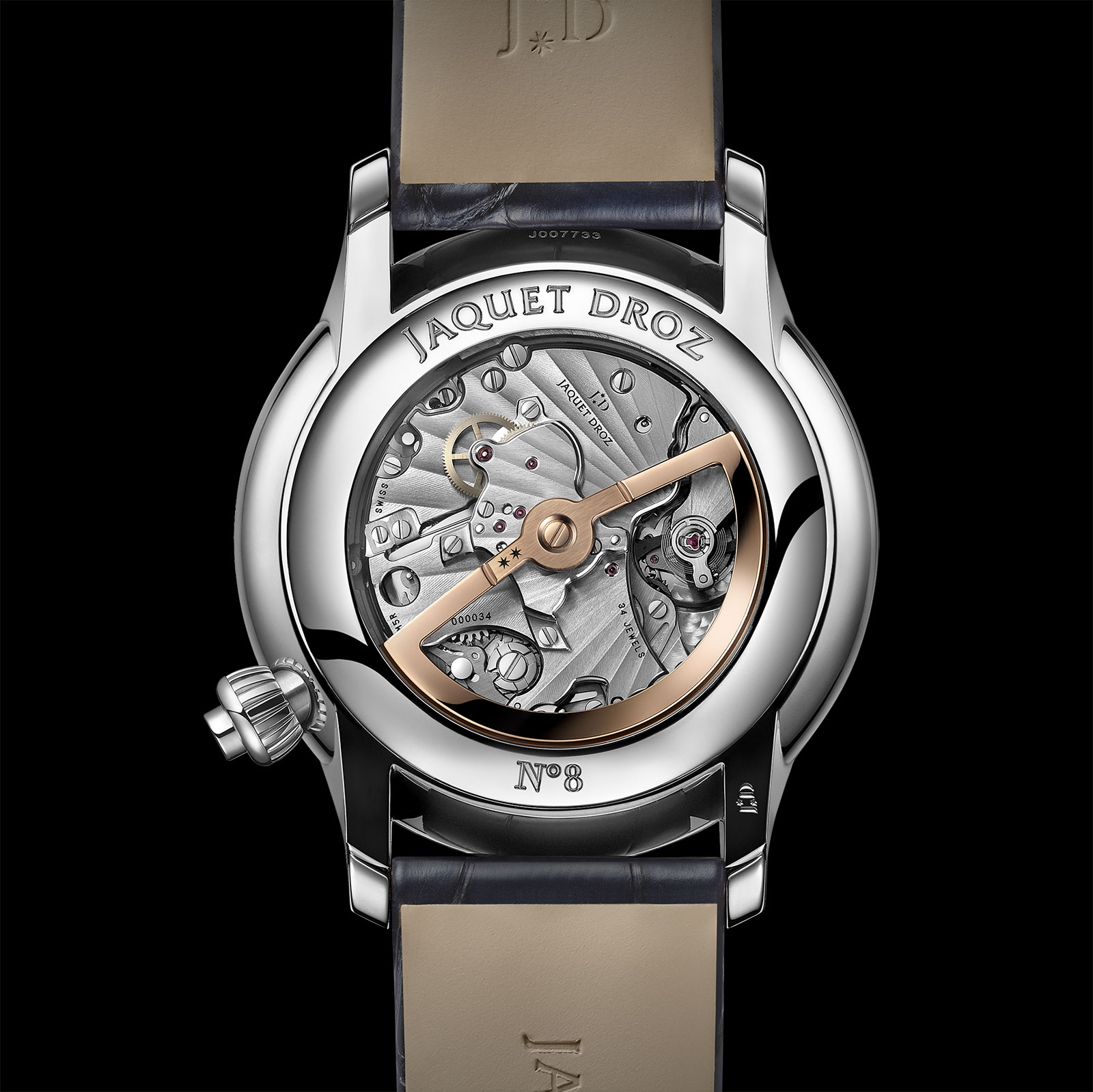 The movement runs on a single barrel and has a power reserve of 40 hours. It’s fitted with a skeletonised, 18k red gold rotor.

Apart from the case material and dials, the models are differentiated by a twist, literally.

The steel Grande Seconde Chronograph has off-centre sub-dials, with the movement having been rotated 45 degrees clockwise, putting the crown at four o’clock and leaving the watch interestingly asymmetrical.

Jaquet Droz has done similar for a handful of Grande Seconde limited editions in the past, but never on a complicated model. 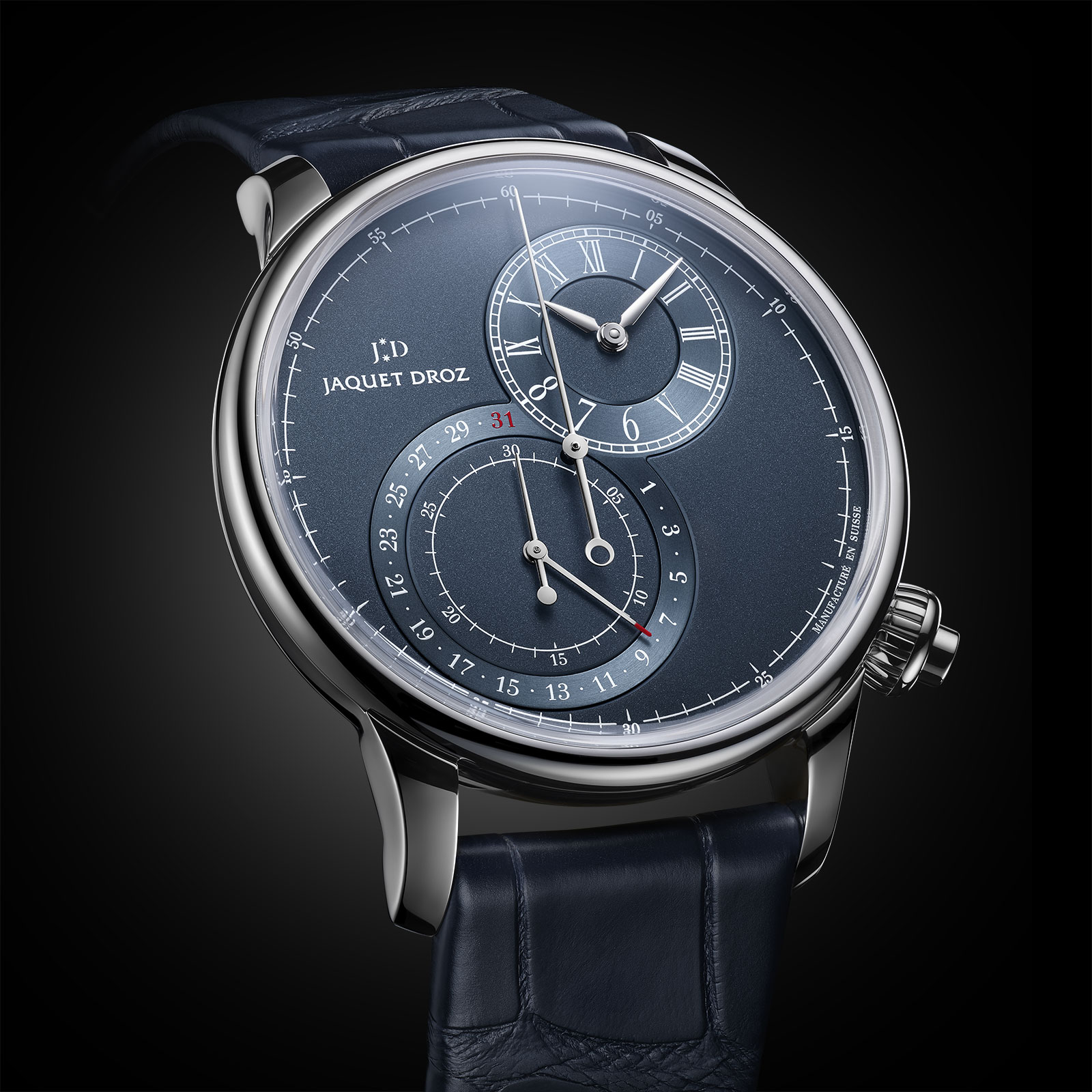 The date indicator is differentiated from the elapsed minutes on the sub-dial by way of a red tip. It’s a subtle touch that echoes with the red “31” on the date track.

Functional colour coding is also applied to the limited edition in red gold, and the steel model with a silver dial. On those two models, the colours of the scales dictate their purpose – blue for chronograph, and black for time and date. 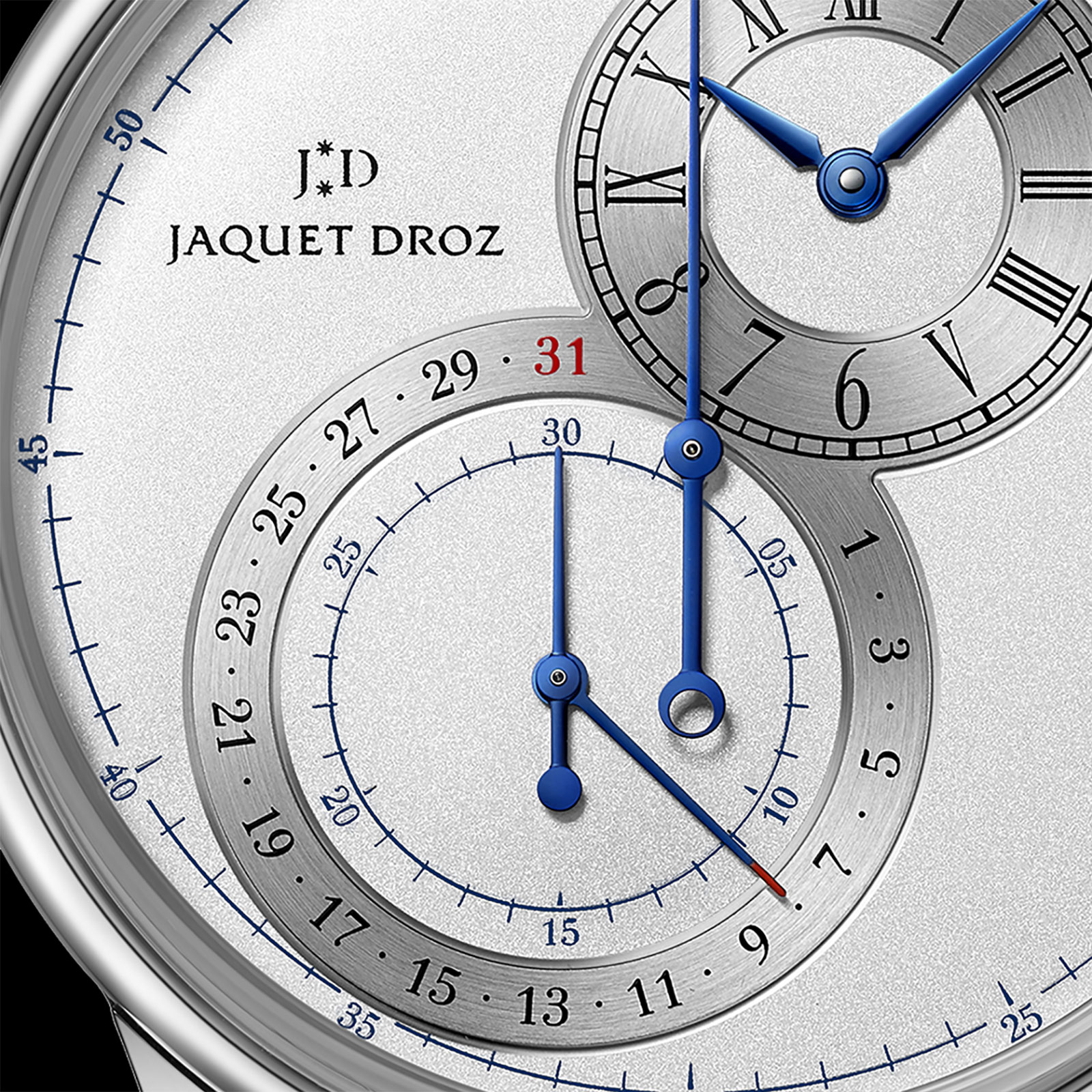 This isn’t the case unfortunately for the other steel models, which instead have the dial print uniformly done in silver, presumably for visual consistency. The symmetrical enamel dial on the gold model is a nod to the historical Grande Seconde, just like the other classic-leaning watches in the collection that take more literal inspiration from the original pocket watch. 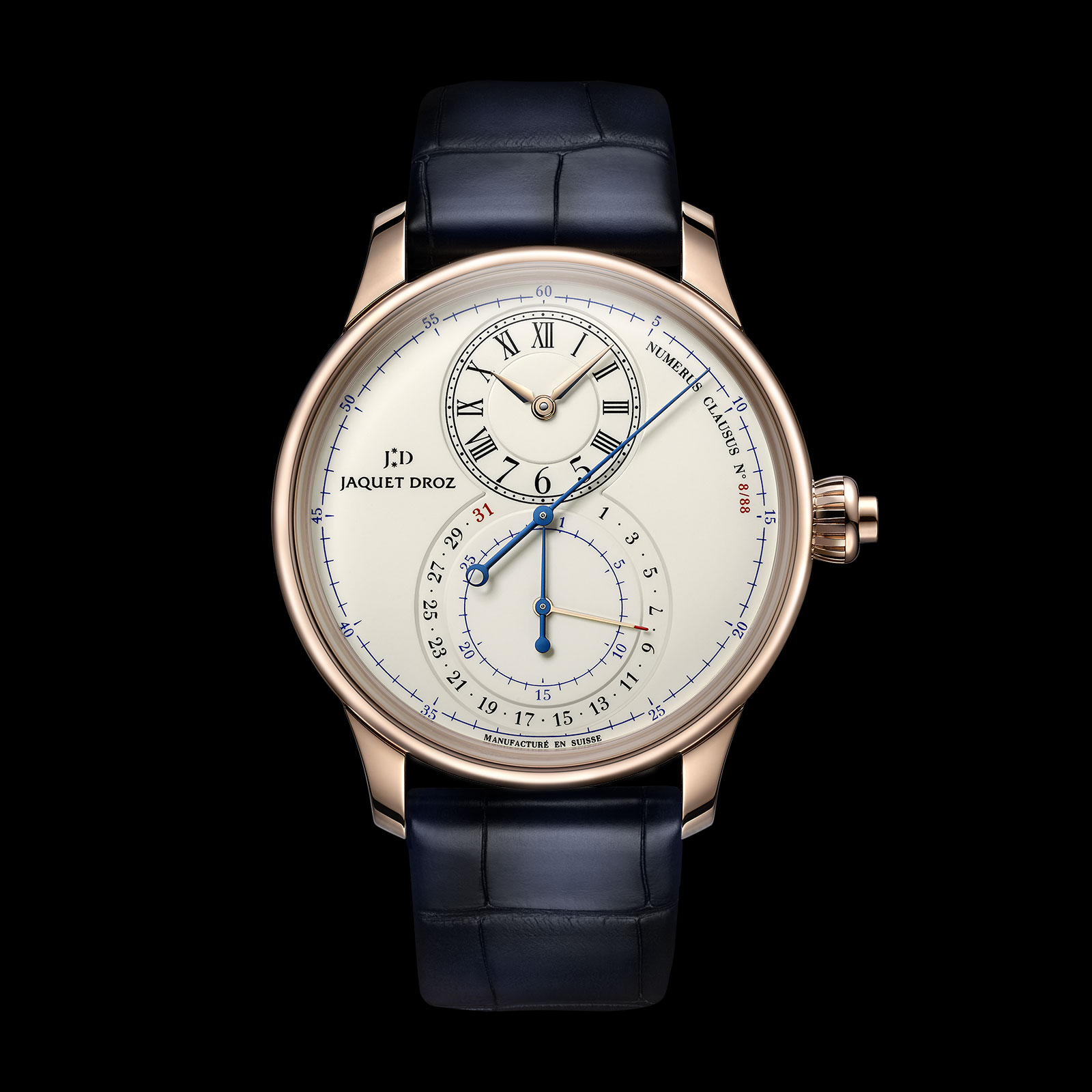 The dial of the Grande Seconde Chronograph in gold is made of several pieces of ivory fired enamel. Both sub-dials are recessed, with their centres being a separate piece that is raised, giving the dial depth.

All lettering on the dial is done the old school way: made of enamel executed via the petite feu technique, basically enamel print baked in an oven. 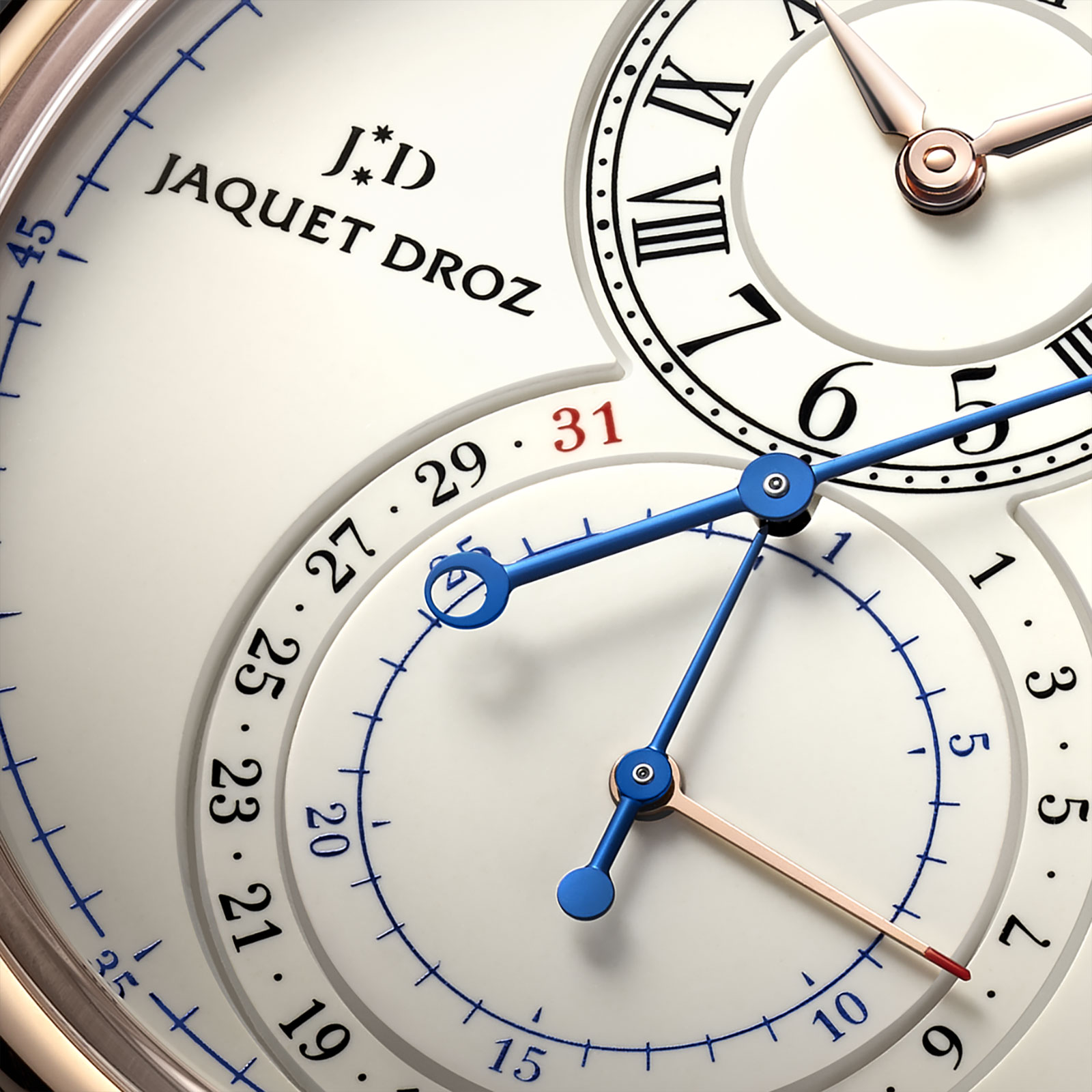