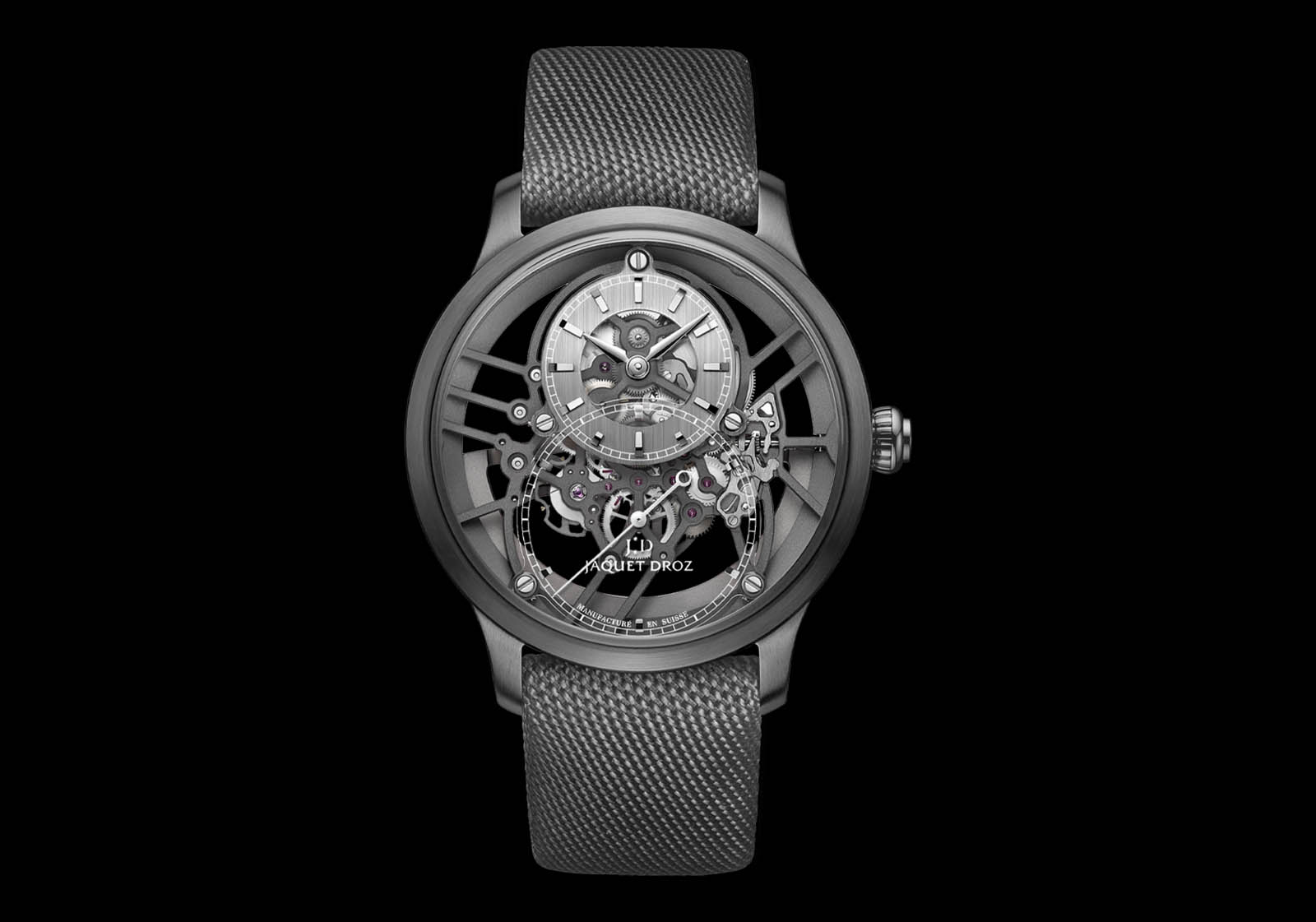 A contemporary take on the brand’s iconic watch – itself based on a 18th century pocket watch – the Jaquet Droz Grande Seconde Skelet-One Plasma Ceramic is a sleek and modern open-worked wristwatch, now in a new, high-tech case material.

Originally available in ordinary ceramic, the watch has now been given a case of “plasma ceramic”, an unusual material that’s best described as a ceramic that resembles metal.

The material begins are white ceramic that’s treated with a plasma gas, essentially ionised gas created at 20,000°C. The process of plasma carburising transforms the surface layer of the white ceramic into a metal oxide, giving the ceramic a grey, metallic finish while retaining all of the desirable properties of ceramic including hardness, low density and scratch resistance. Though plasma ceramic has been a hallmark of the Swatch Group and its many brands, including Rado, Omega and Blancpain, it is being used for the first time by Jaquet Droz. 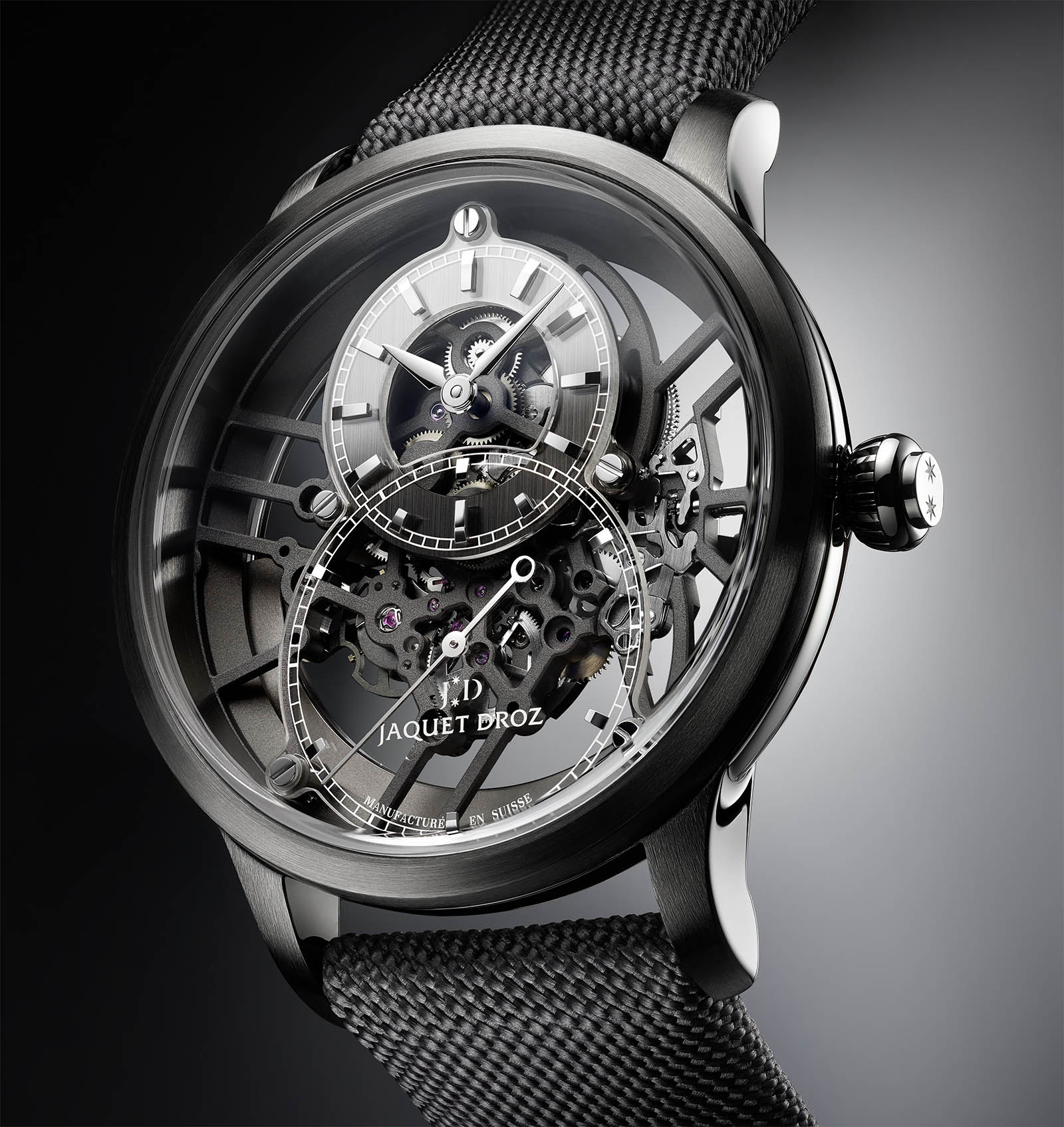 The case measures 41.5 mm across and 12.48 mm high, making it a tad larger than its gold counterparts, which is typically the case for ceramic cases due to the necessities of construction in an ultra-hard, but potentially brittle, material. Unusually for ceramic that is typically mirror-polished all round, the case is finished with contrasting surfaces – the bezel and top surfaces of the lugs are brushed while the case band has a polished finish.

A clear sapphire disc forms the Grande Seconde dial, with the hours and minutes chapter ring on top, and the outsized seconds at the bottom. Interestingly, the sapphire disc is secured to the main plate by screws that are all perfectly aligned with the hour and minute markers. That’s because the screws are actually bolts secured by screws on the inverse side, because sapphire crystal is too fragile to be tensioned with screws.

The movement is the self-winding cal. 2663 SQ with double barrels that offer a 68-hour power reserve. Though it is based on a Frederic Piguet caliber, the movement has been significantly modified technically, and further customised for Jaquet Droz. The technical upgrades include a silicon hairspring and pallet fork, along with a decorative, solid gold rotor.

For the Skelet-One, the bridges and base plate that have been skeletonised in a modern, geometric manner, and then finished with frosting on the top surfaces and straight-graining on the undersides. More importantly, the movement has been customised for the large watch case: the base plate and bridges have been enlarged to fill the case without the need for a movement ring. This results in an incredibly airy look with wide openings surrounding the moving parts. 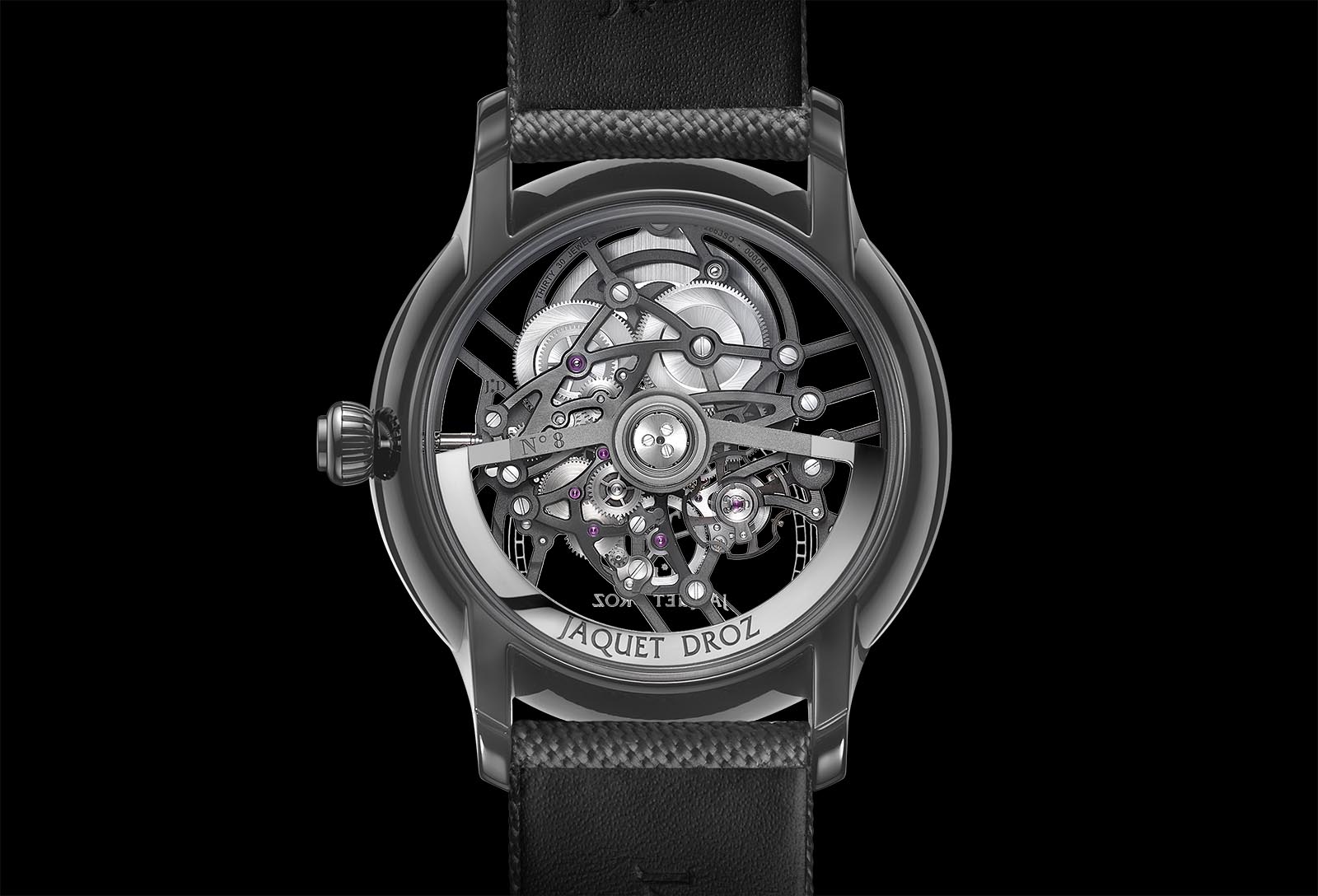