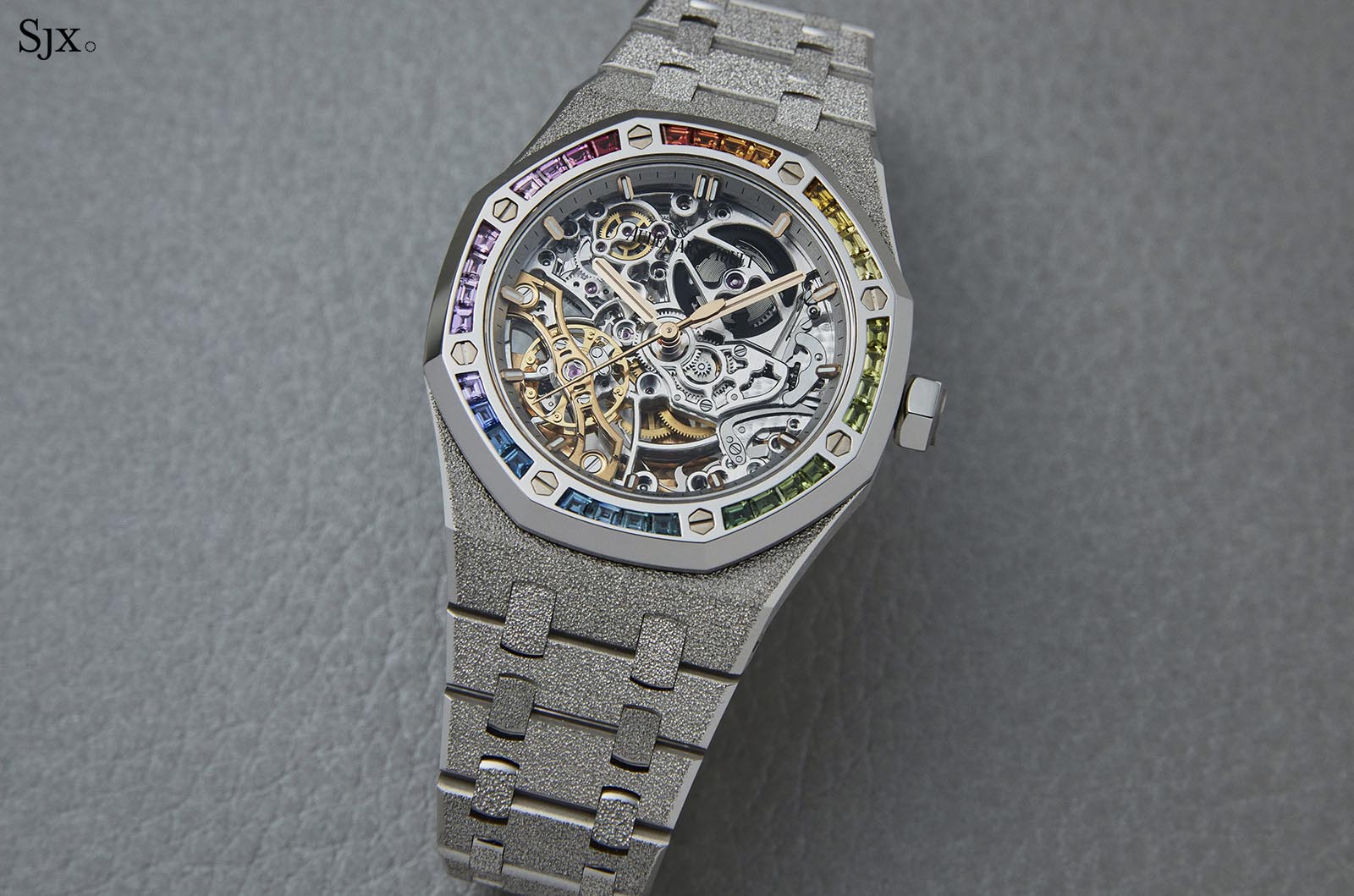 Of all the watches presented by Audemars Piguet at SIHH this year (which included the much maligned Code 11.59), the Royal Oak Frosted Gold Double Balance Wheel Openworked was the glaring standout, not only for its rainbow razzmatazz, but its other striking attributes – the greatest hits of AP combined in one watch.

Essentially a flamboyant, female version of the sought-after Royal Oak Double Balance for men, this has an 18k white gold case and bracelet finished with the “frosted” finish developed by Florentine jeweller Carolina Bucci, an uber-fashionable “rainbow” bezel with coloured sapphires, and a skeleton, double balance wheel movement. It’s one of the most exotic yet salient versions of the Royal Oak of recent times, but it is a ladies’ watch.

The case is 37mm wide, enough for a watch that already packs quite a visual punch. It is 10mm in height, a hair thicker than usual due to the additional balance wheel, giving it a pretty chunky feel. 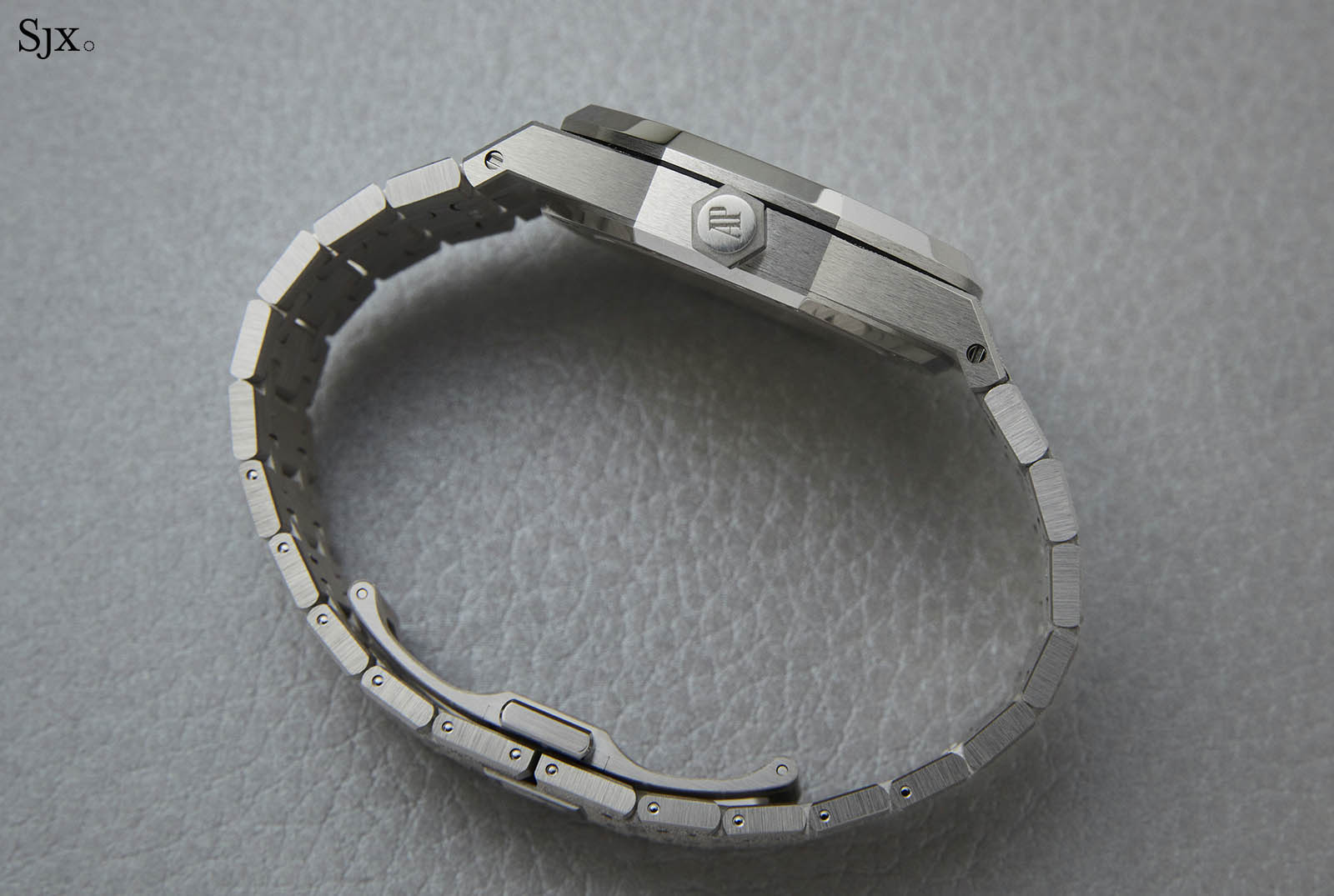 Both the case and bracelet have a hammered finish inspired by a decorative technique of Florentine jewellery that creates a glittery, granular surface that is almost gem-like. Known as the Florentine finish, the process uses a diamond-tipped tool to repeatedly batter the gold surface. 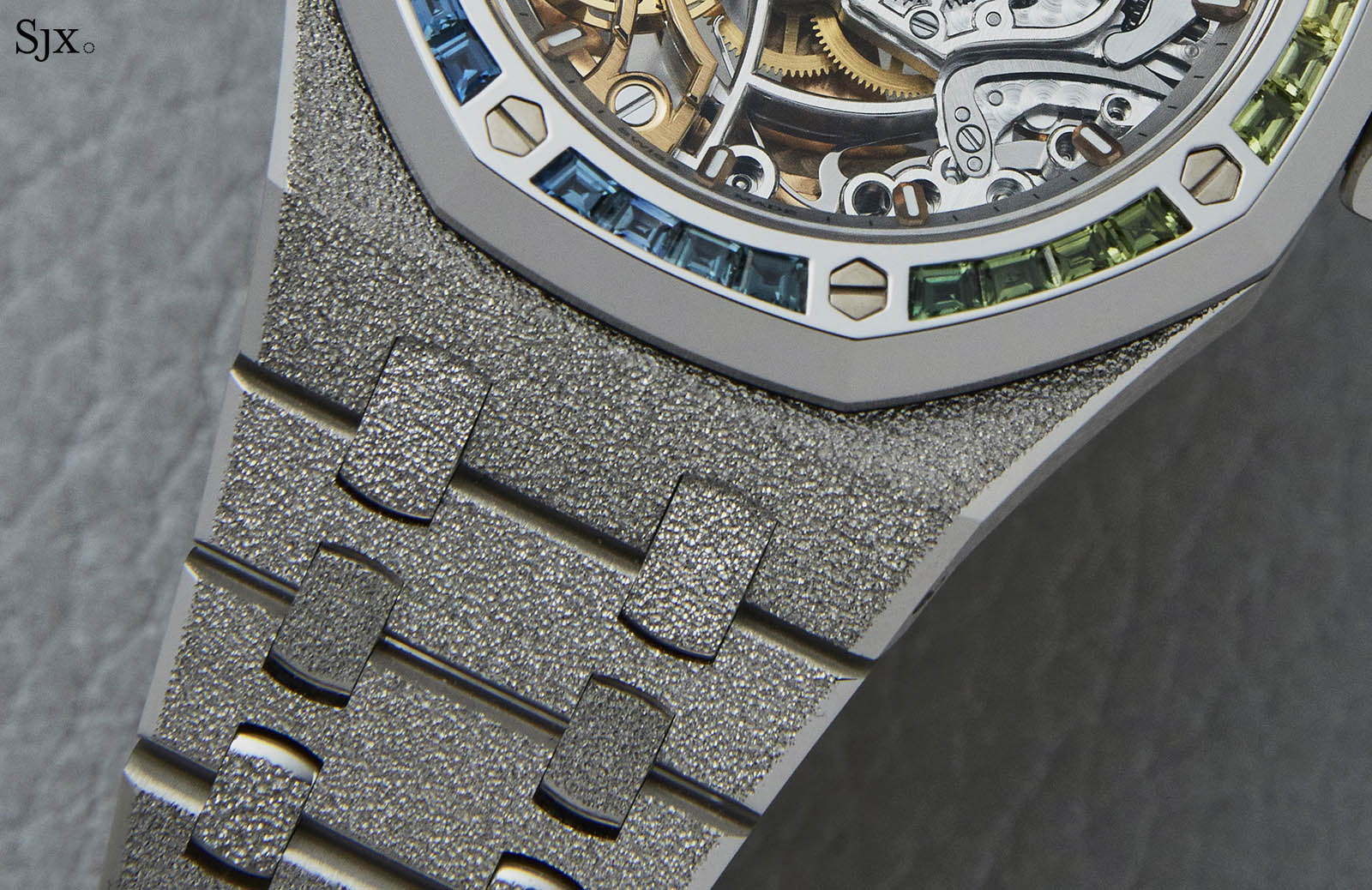 To maintain a crisp finish and edge on each surface, the finishing is applied by hand to each exterior component one at a time, making it most laborious to finish the bracelet.

And even though the frosted finish takes centrestage, the case and bracelet retain the traditional fine detailing of the Royal Oak, including the mirror polished bevels on all edges as well as the finely grained brushing on the flanks.

The watch is made even more striking by the “rainbow” bezel that is set with 32 multi-colored, baguette-cut sapphires totalling 2.24 carats. The sapphires are appropriately modest in size, adding intensity and depth to the design of the signature octagonal bezel rather than take away. 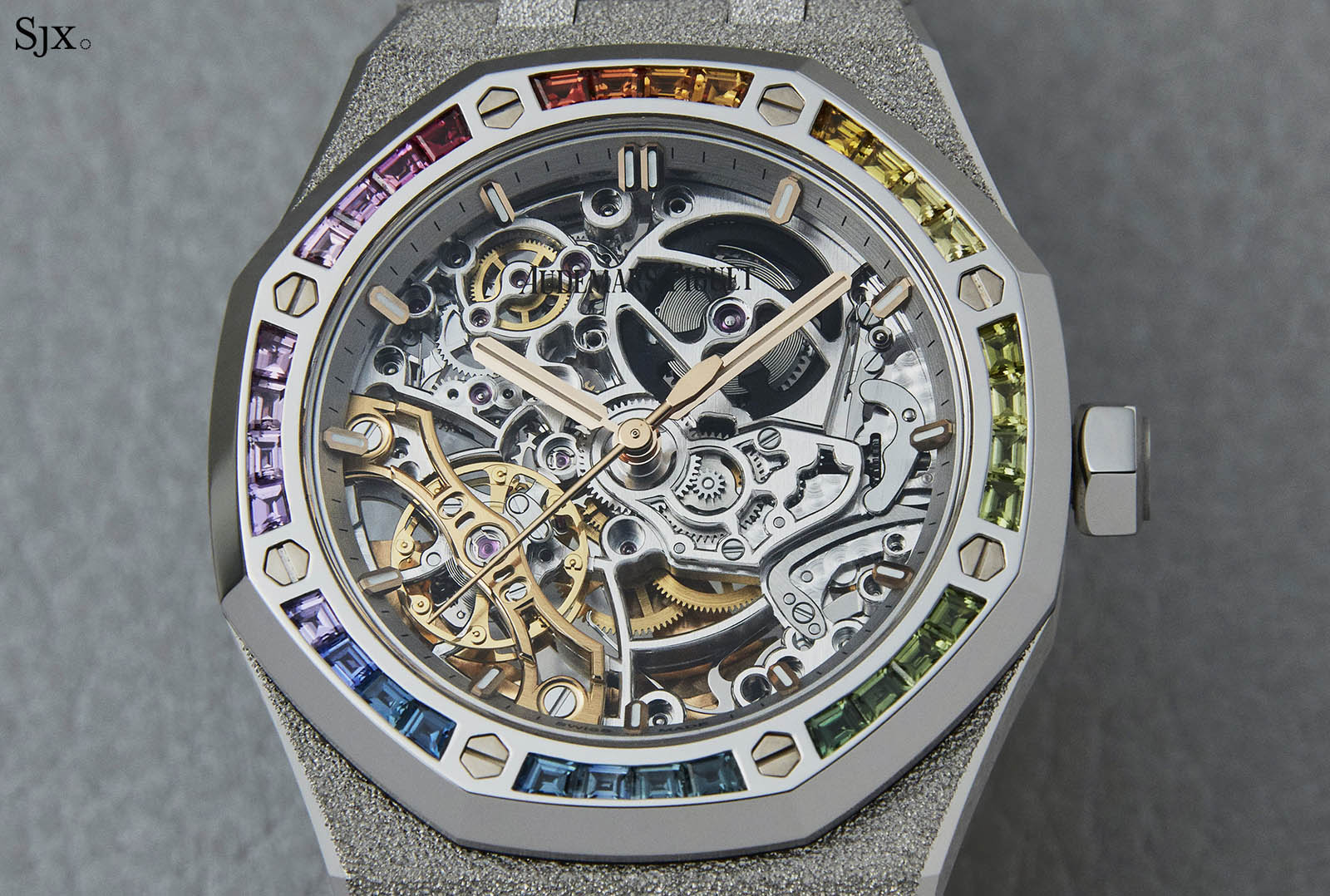 They form a clockwise colour gradient that begins with a coral at 12 o’clock and ends with reddish pink at 11.

Most rainbow bezels do not go beyond a reddish pink, as actual dark red sapphires would be classified as rubies, which are hence rarer and consequently more expensive. An example of one that does have red sapphires is the Hublot Unico Sapphire Rainbow.

That being said, it is worth noting that majority of coloured sapphires used to decorate watches are heat treated to enhance their colour. 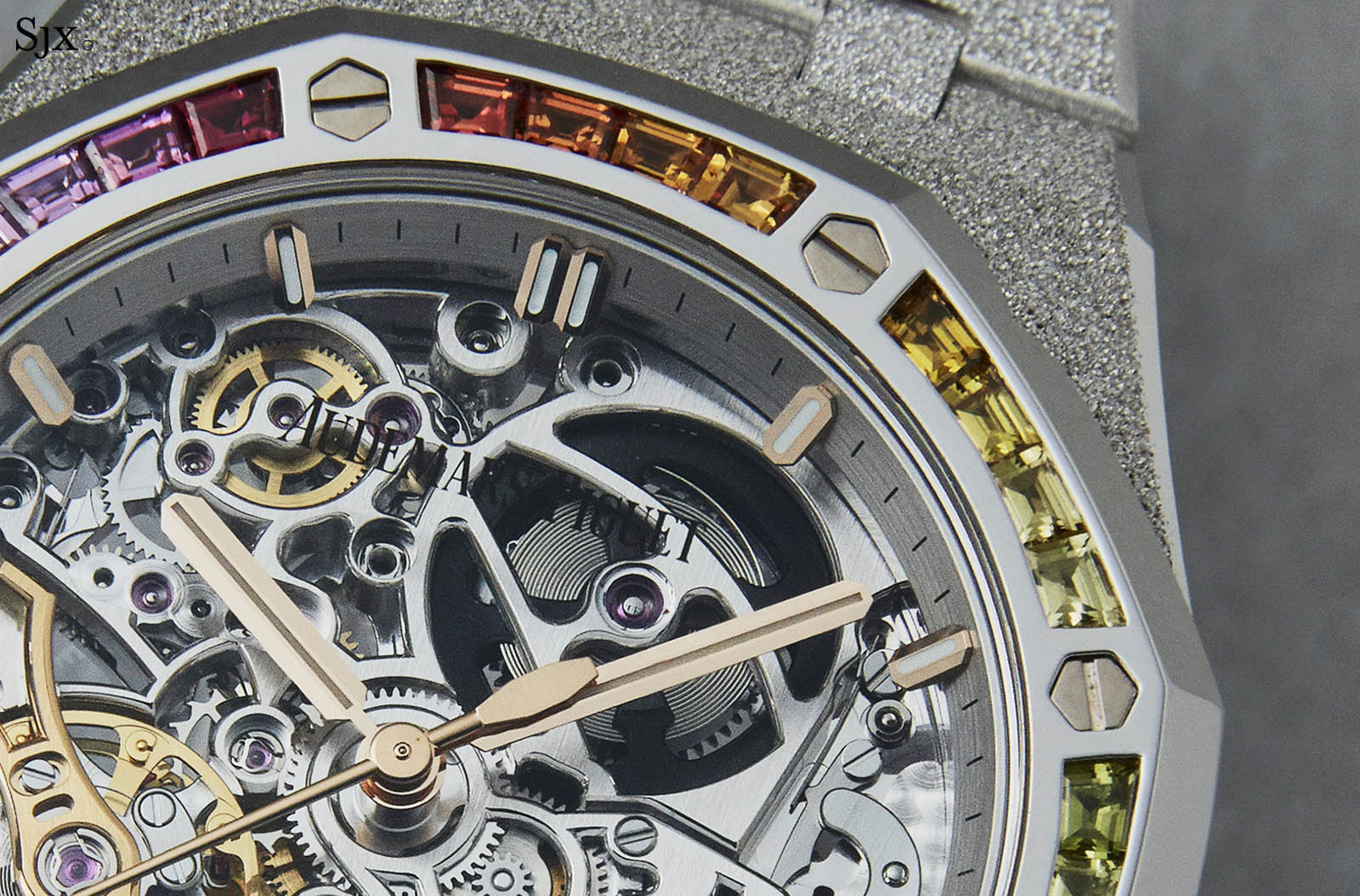 But the real kicker in the watch is the in-house, automatic cal. 3132 that is essentially the brand’s workhorse cal. 3120 with the incorporation of a double balance.

Not only does it showcase artful, contemporary skeletonisation, but the movement also features one of the most unusual configurations of the double balance concept.

The double balance wheel here is not to be confused with dual regulator watches by Philippe Dufour, F.P. Journe and MB&F that primarily meant to tackle the problem of positional errors in the balance.

First introduced in 2016, Audemars Piguet’s patented configuration is meant to improve rotational inertia, with both balance wheels co-axial and beating in sync. So it does not require a differential to average out the rate of both balances as both have a single rate. 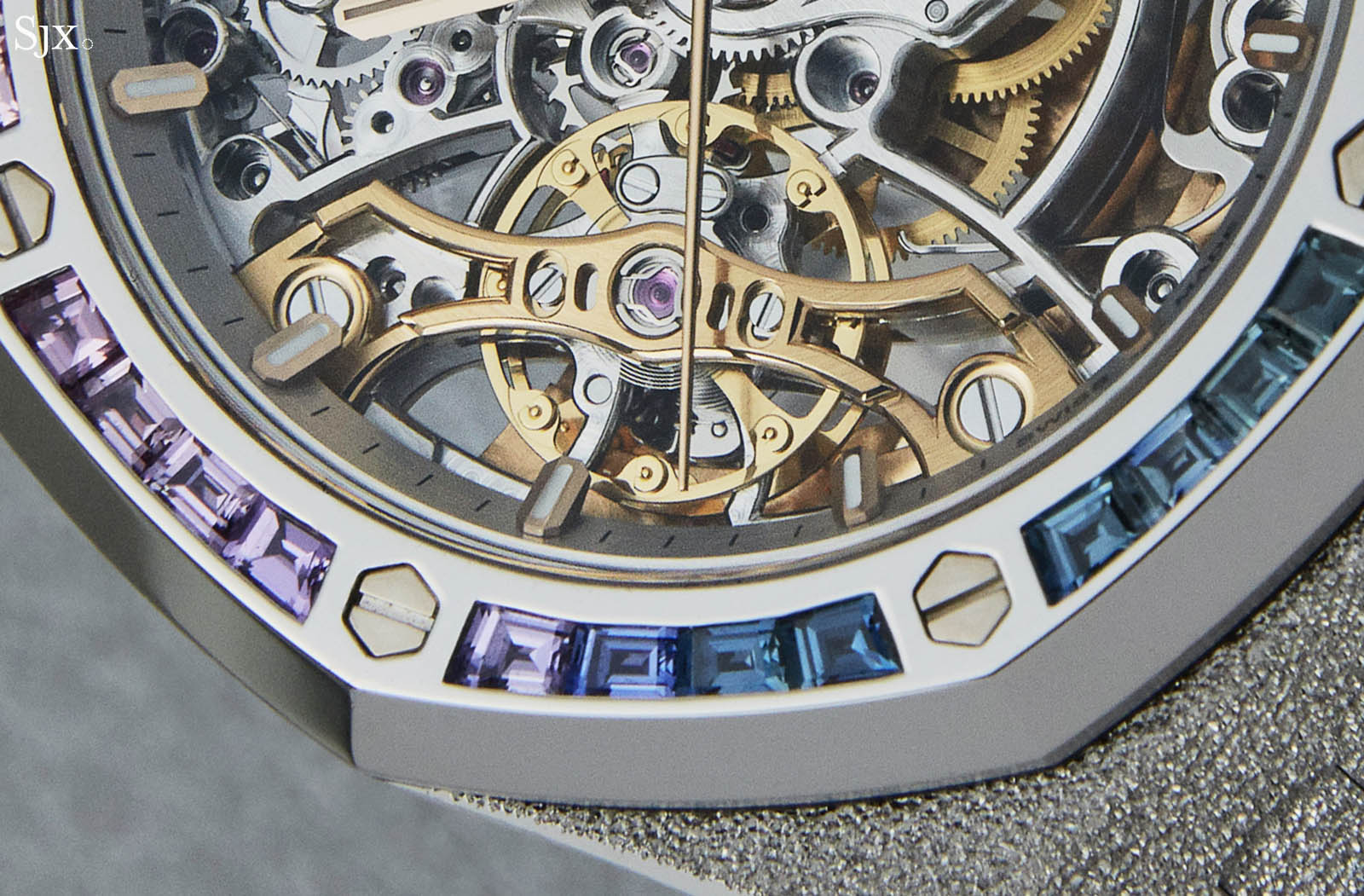 Each balance wheel has its own hairspring and is are mounted on the same balance staff, sharing the same axis of rotation. Both balance wheels are free sprung, and adjusted with eight weights on their rims.

The benefit of having two balance wheels is greater mass, which in turn increases the inertia of the oscillator. That makes its rotation more stable and less likely to be affected by shock as compared to a single balance wheel.

In addition, having one flat hairspring for each balance pinned in the opposite manner to the other means that the concentricity of the combined hairsprings is improved, keeping the centre of gravity of the balance wheels more, well, centred. 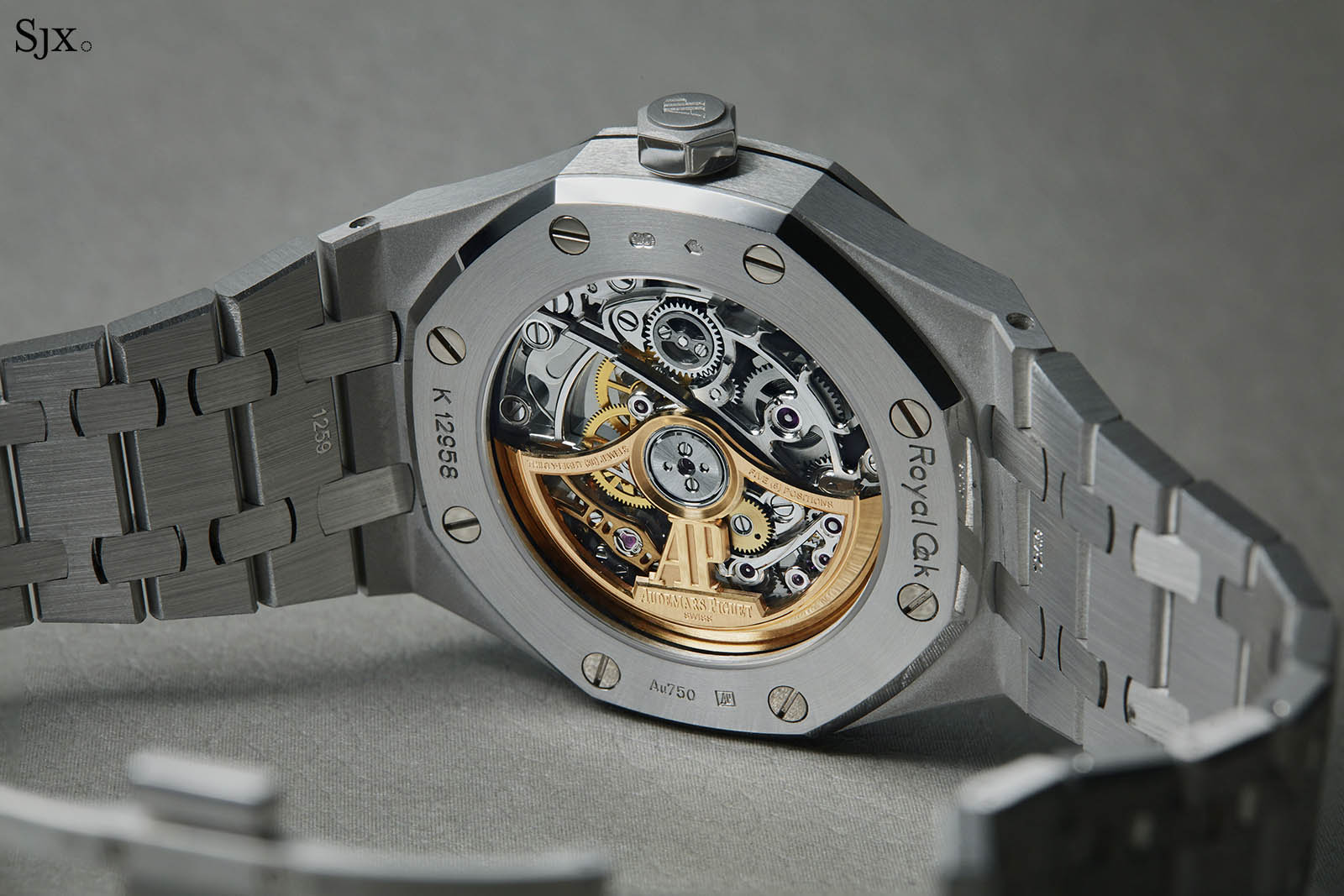 The double balance wheels are highlighted by a solid gold balance bridge, while the rest of the bridges are rhodium-toned. As with modern day AP skeleton movements, the bridges have been open-worked in a clean and geometric manner, eschewing the flowery decoration found on earlier generations of skeleton watches. The lines and airiness of the open-worked bridges are emphasised by their clean, straight grained surfaces and prominent, polished bevels. 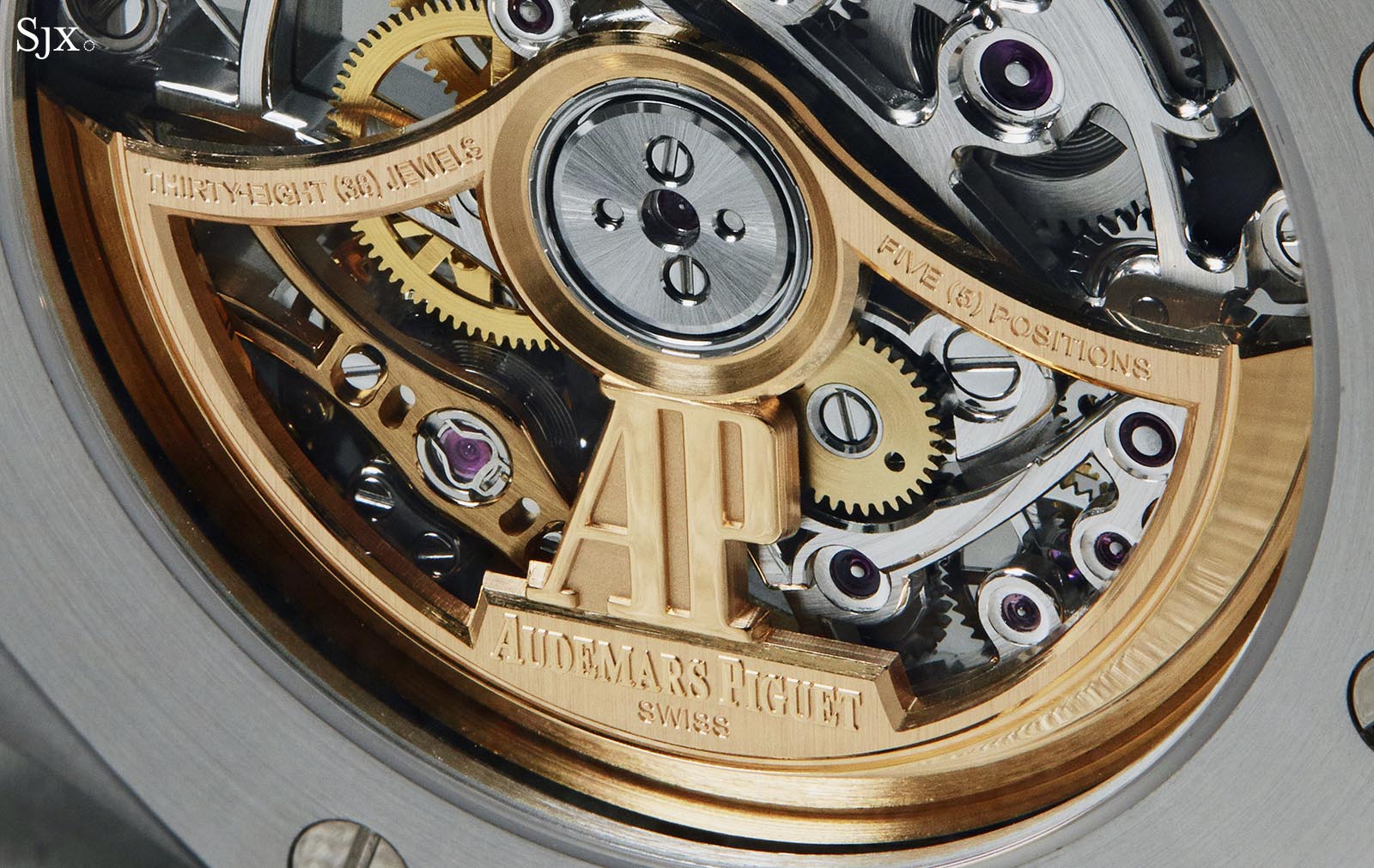 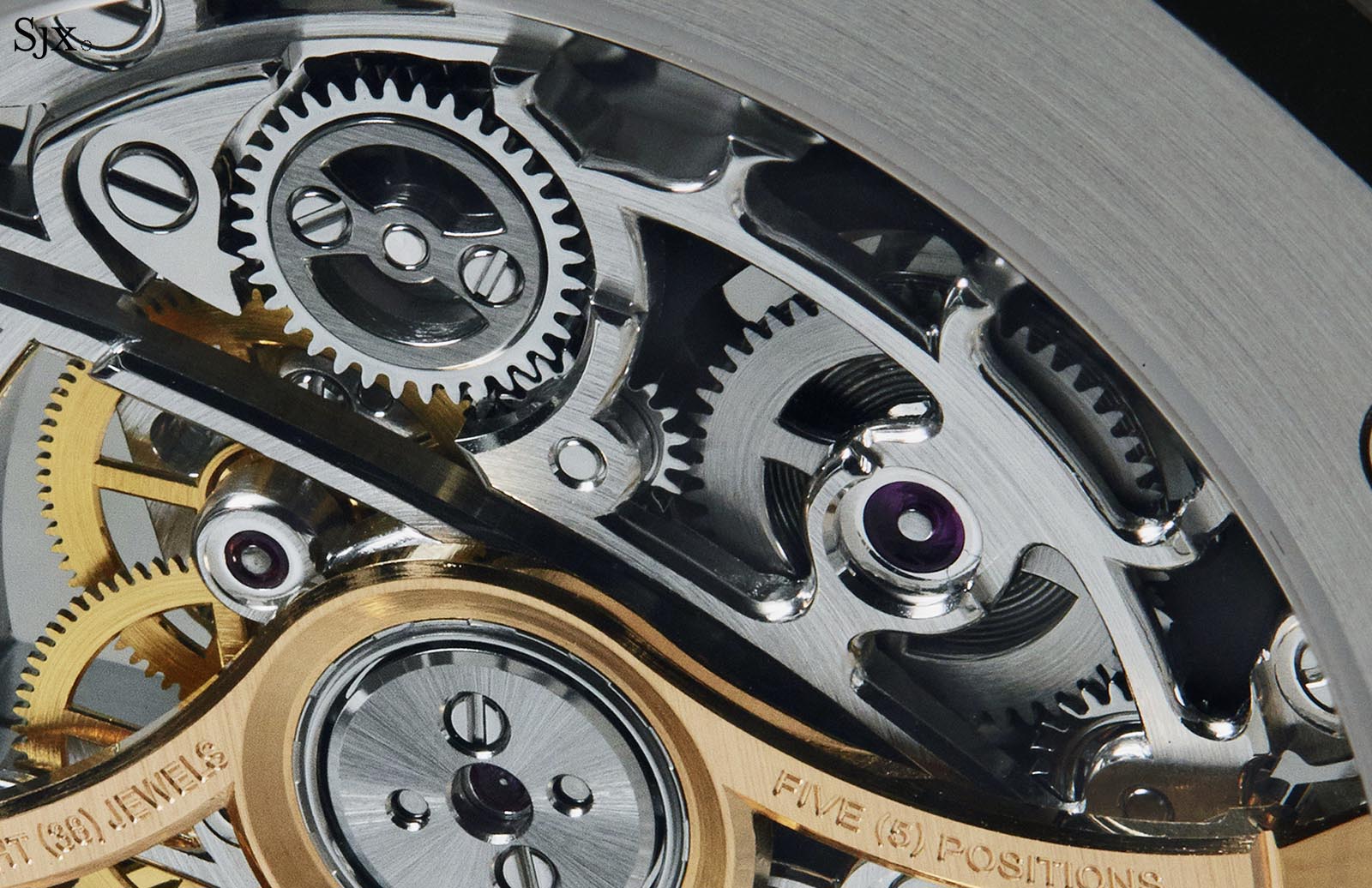 The movement has a 45-hour power reserve, compared to 60 hours in the standard cal. 3120 that has only a single balance wheel. Previously only available in a men’s Royal Oak with 41mm case, the cal. 3132 is actually a fairly small movement that’s only 26.6mm wide, and thus fits better in a smaller case.

Rainbow bezel watches have proliferated since Rolex scored a smash hit with its Daytona “Rainbow”. There are enough rainbow watches around that it feels like the fad is nearing the peak.

But the Frosted Gold Royal Oak Double Balance Wheel Openworked “Rainbow” stands out for three key reasons: it has an exotic case finish that enhances the traditionally intricate octagonal case, one of the most unusual and interesting innovations in timekeeping and, above all, it remains – visibly – a Royal Oak.