A watch that combines the famous octagonal case with an innovative movement, the Royal Oak Double Balance Wheel Openworked is unquestionably the most technically interesting time-only Audemars Piguet (AP) Royal Oak. And then there’s this bejewelled version that’s certainly a lot more extravagant, but at the same time shows off the details and finishing of the movement better.

This watch is the ultimate black-tie watch – time-only and eminently classical in size at just 37 mm. In fact, it’s quite a bit smaller than the 41 mm standard model, making it a discreet fit under a cuff that will probably be secured by diamond-set cufflinks. It’s also dressed up with a glossy crocodile strap and a lot of generously sized, baguette-cut diamonds – a technically-inclined watch that takes its bling seriously. 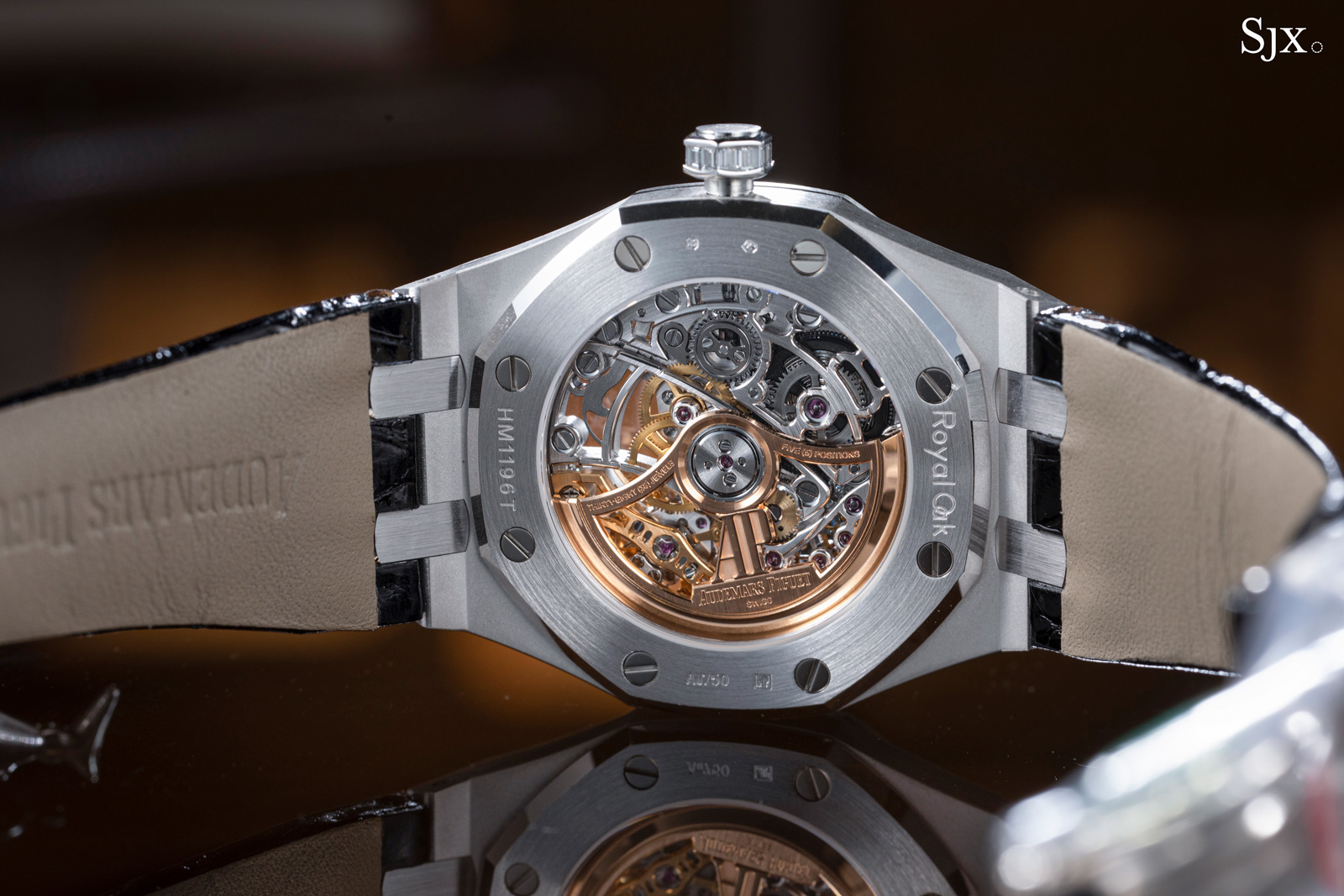 But this is not just another octagonal watch with diamonds. The movement relies on a novel technical concept for better timekeeping, but its technical merits are usually overlooked because it is installed inside a “hot” watch.

And this particular version of the movement is more attractively executed here than on the standard models. Because movement here is plated in silvery rhodium – no doubt to match the dazzling whiteness of the diamonds – it’s more appealing than on the non-jewelled versions that have a dark grey ruthenium finish that’s almost black. While the finishing of the two is essentially identical, the dark finish obscures much of the movement’s details, while this has a bright finish that reveals the finishing well. One of the adjustable mass balance wheels

The cal. 3132 takes a maximalist approach to chronometry with two hairsprings, each with its own balance wheel. It’s essentially a skeletonised version of the workhorse cal. 3120, with the addition of the twin balance wheels.

A conventional flat hairspring is pinned at its two ends, meaning that the coils of the spring expand and contract slightly off centre. When the movement is vertical, the problem is exacerbated due to gravity, which pulls the hairspring downwards and even more off centre. AP’s elevates the concept with twin balance wheels – one for each hairspring. Though each balance is conventional, weighing the same as the standard balance, there are now two of them, which means the cumulative mass is double. This essentially doubles the inertia of the regulator, resulting in more stable timekeeping, even in the face of shocks that disturb the balances. 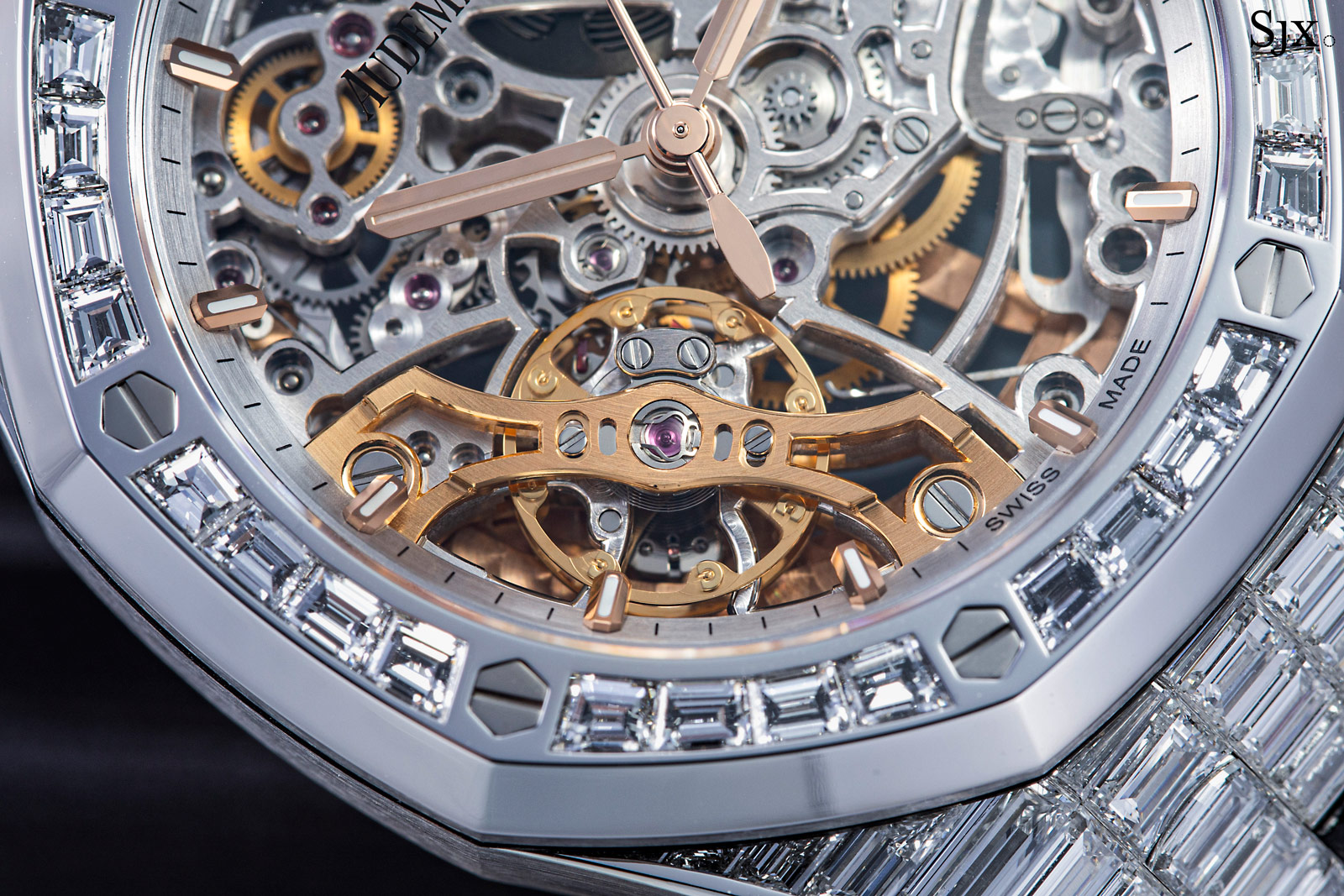 The second balance wheel that’s visible from the back

But the added weight means more energy is required to keep the watch running, which is why the power reserve drops, from 60 hours in the standard cal. 3120 with a single balance wheel, to 45 hours here. Though it’s a decline of a third, 45 hours is sufficient. 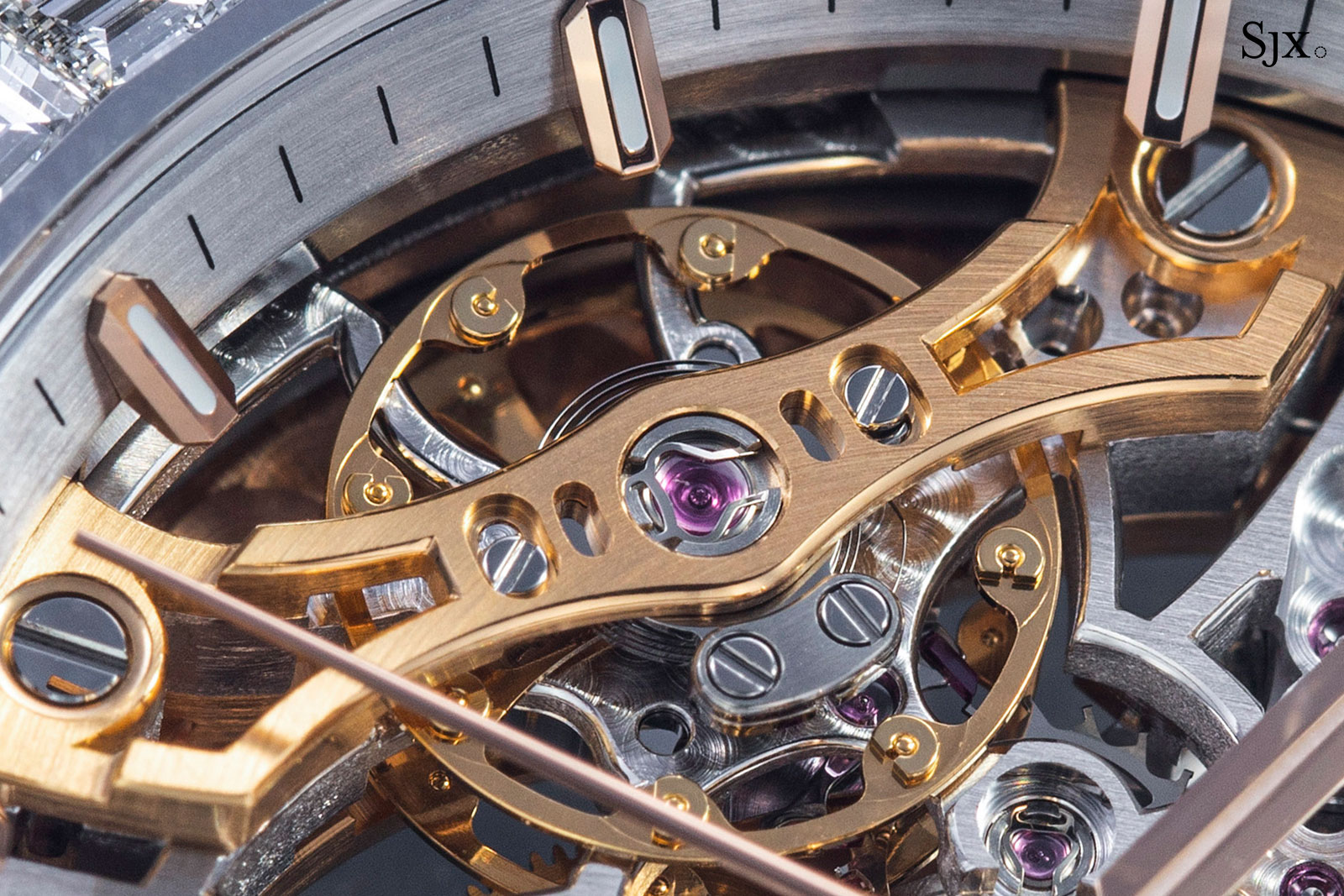 The solid gold full bridge for the balance on the dial To make sure the upgrade is prominent, the balances are secured on both sides by a pair of solid red-gold bridges. This is exactly as it’s done on the standard model, but I would have preferred white gold bridges for the balance on this watch, which would better suit the colours of the diamonds and movement. 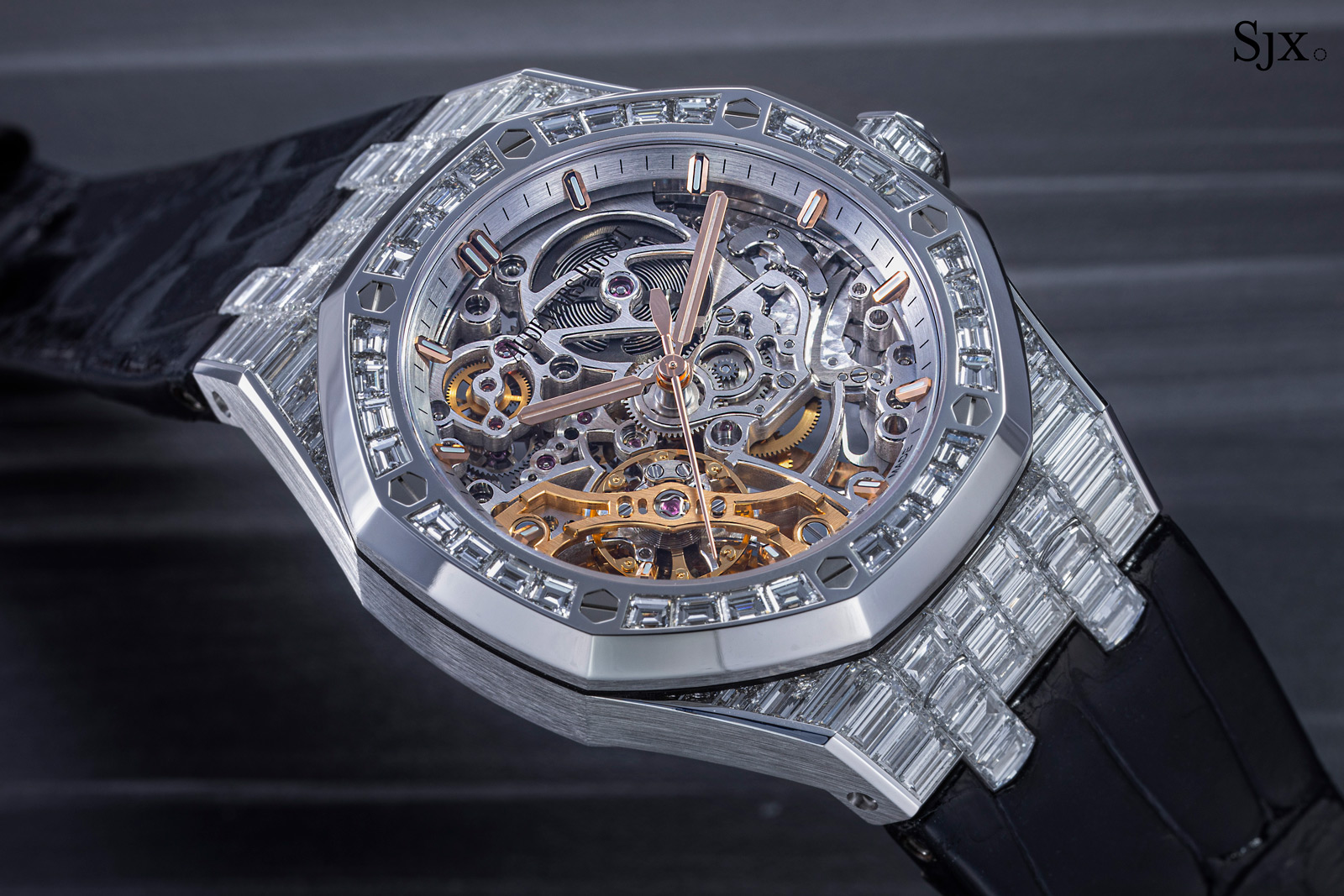 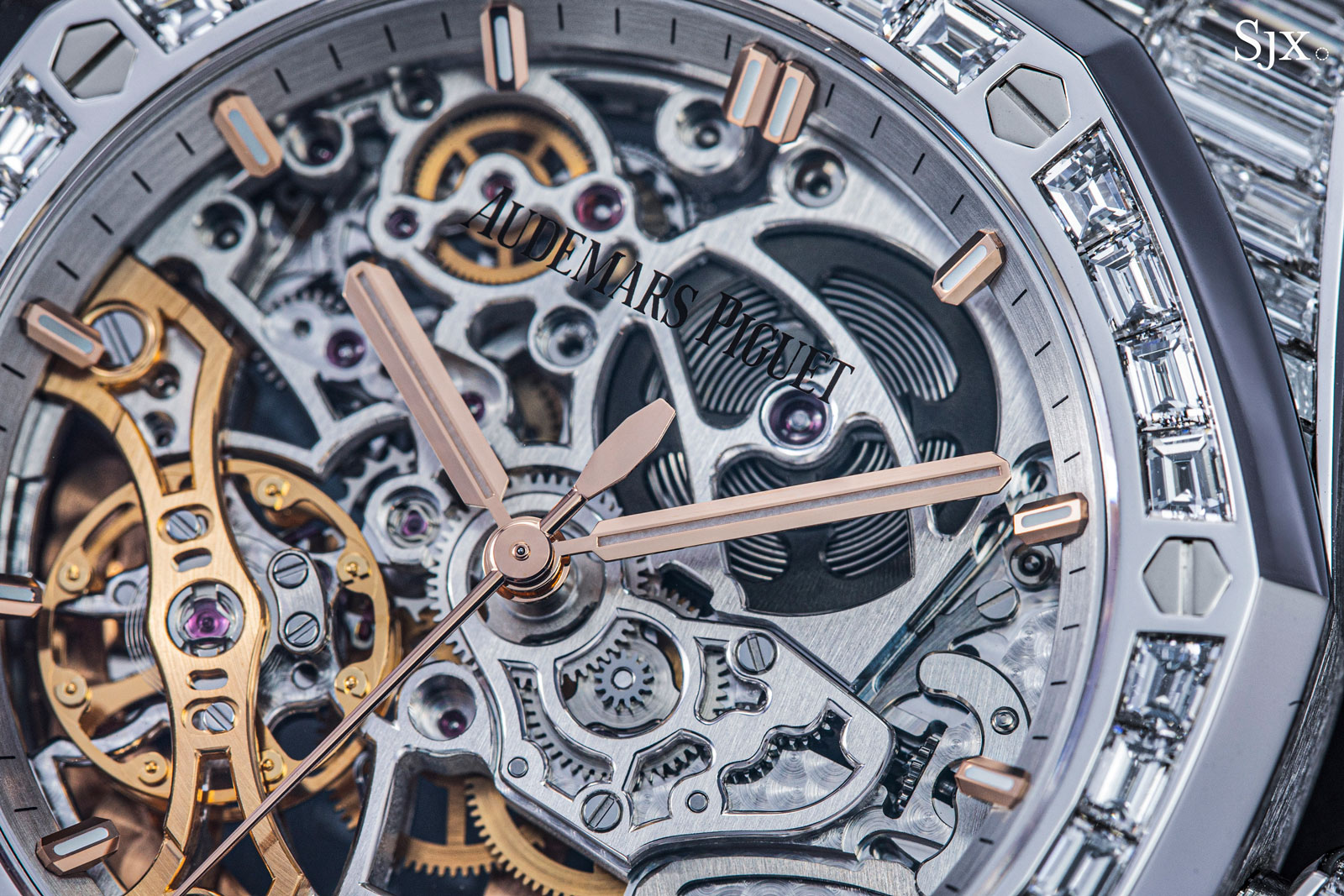 The movement is identical to that on the standard model, which means excellent. But the bevels and graining are more apparent here, because of the light colours of the finish. That’s true on both the front and the back. 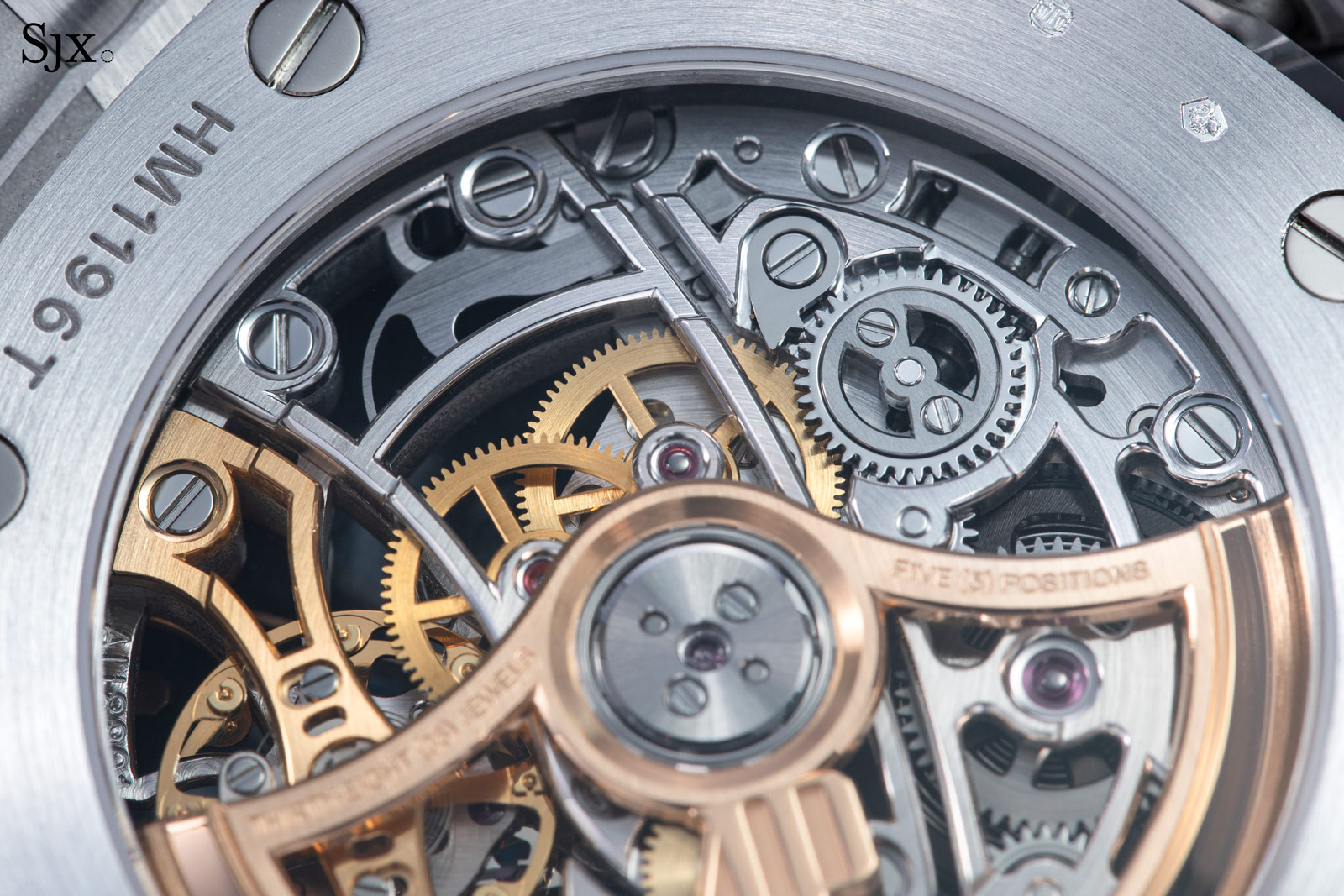 Maybe because the watch is relatively small compared to the typical Royal Oak, the flange for the minute track and hours is sloped, while the hour markers are inclined even more steeply. That creates a bit of an amphitheatre effect that frames the movement well. 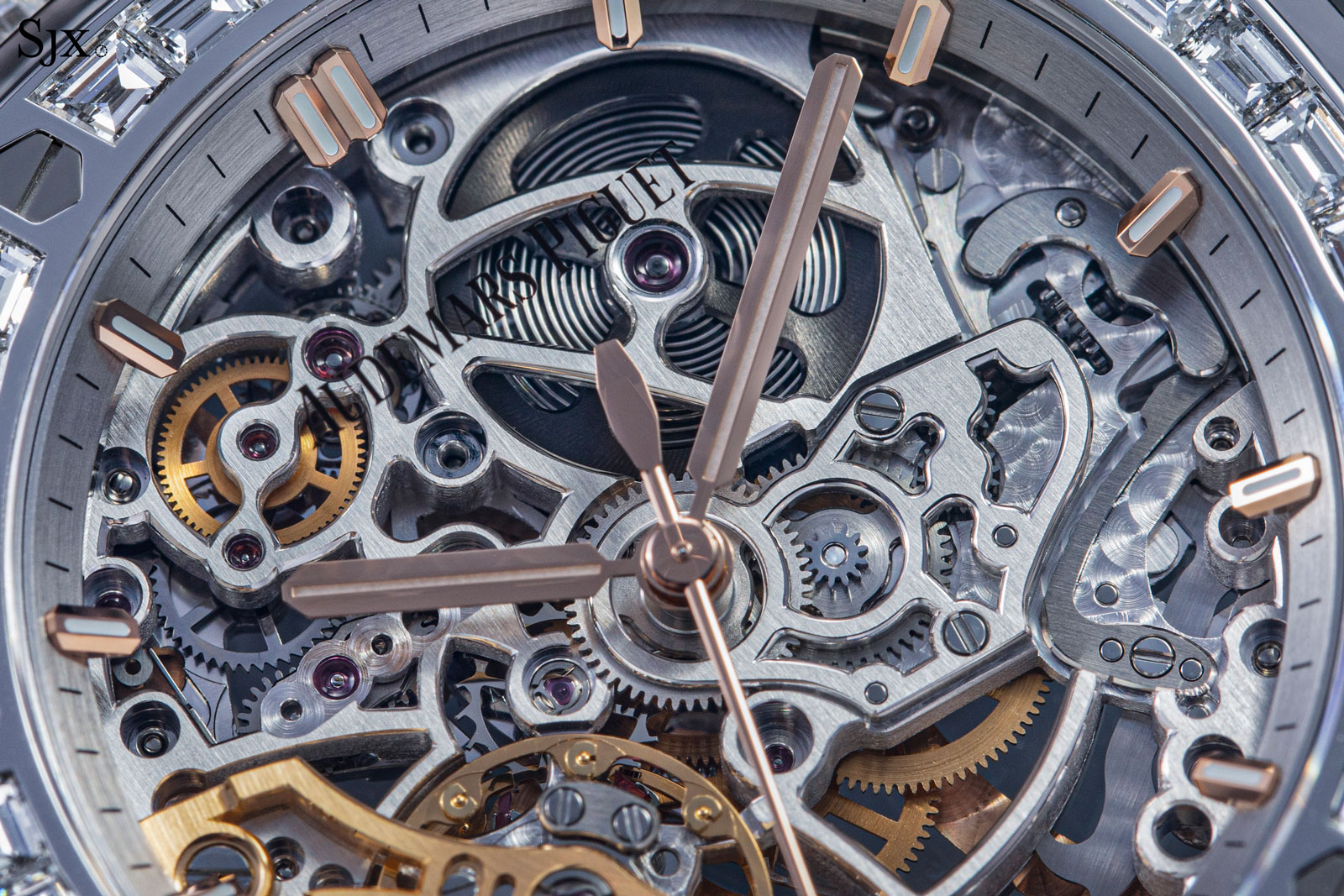 The skeletonisation is clean in style, with the bridges rhodium-plated, brushed on the top, and outlined by wide, polished bevels 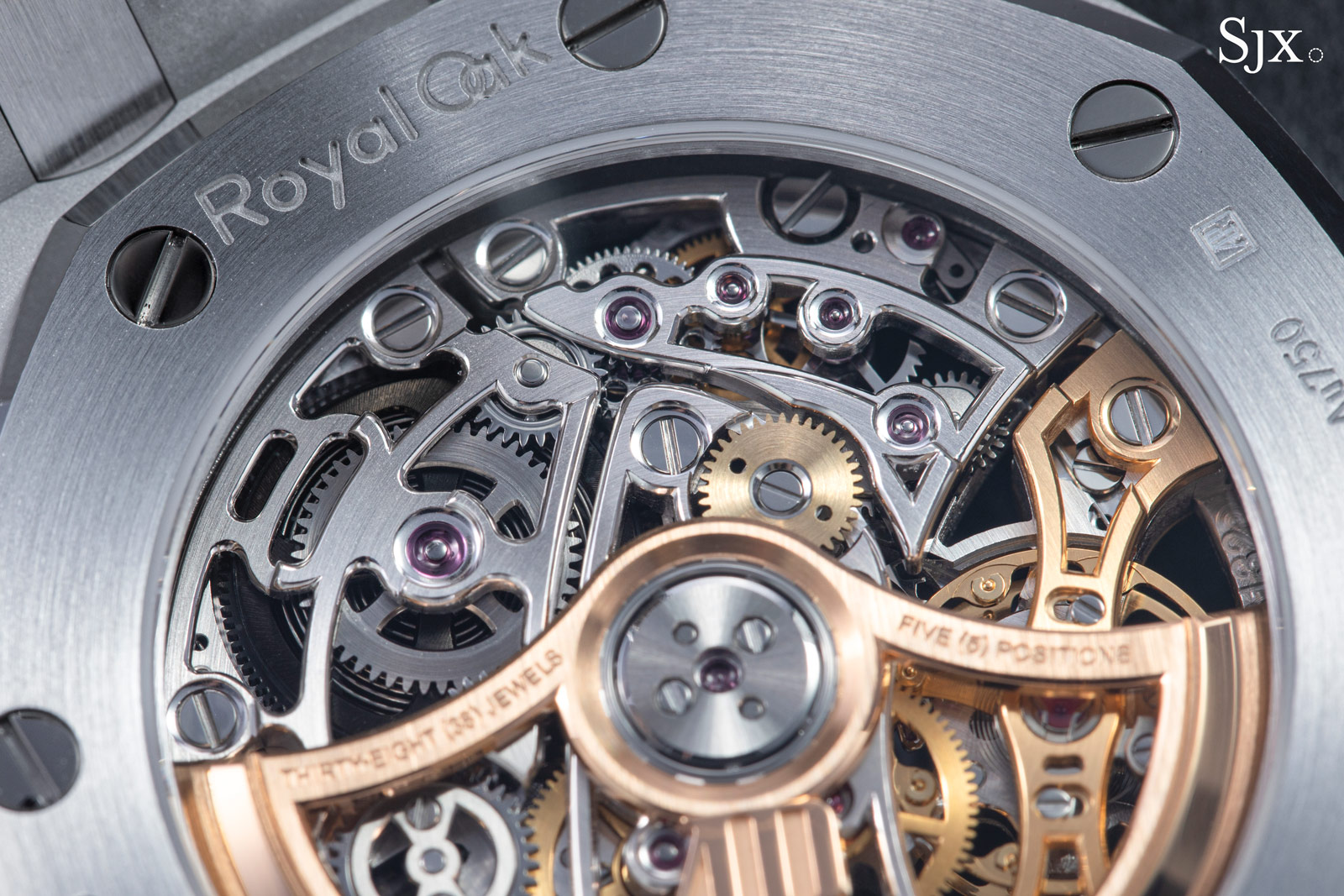 Because of the intricacy of the open-working, the bridges incorporate several sharp, inward angles within the bevelled edges. Not all of the inward angles are sharp corners, but there are enough to illustrate the quality of finishing. 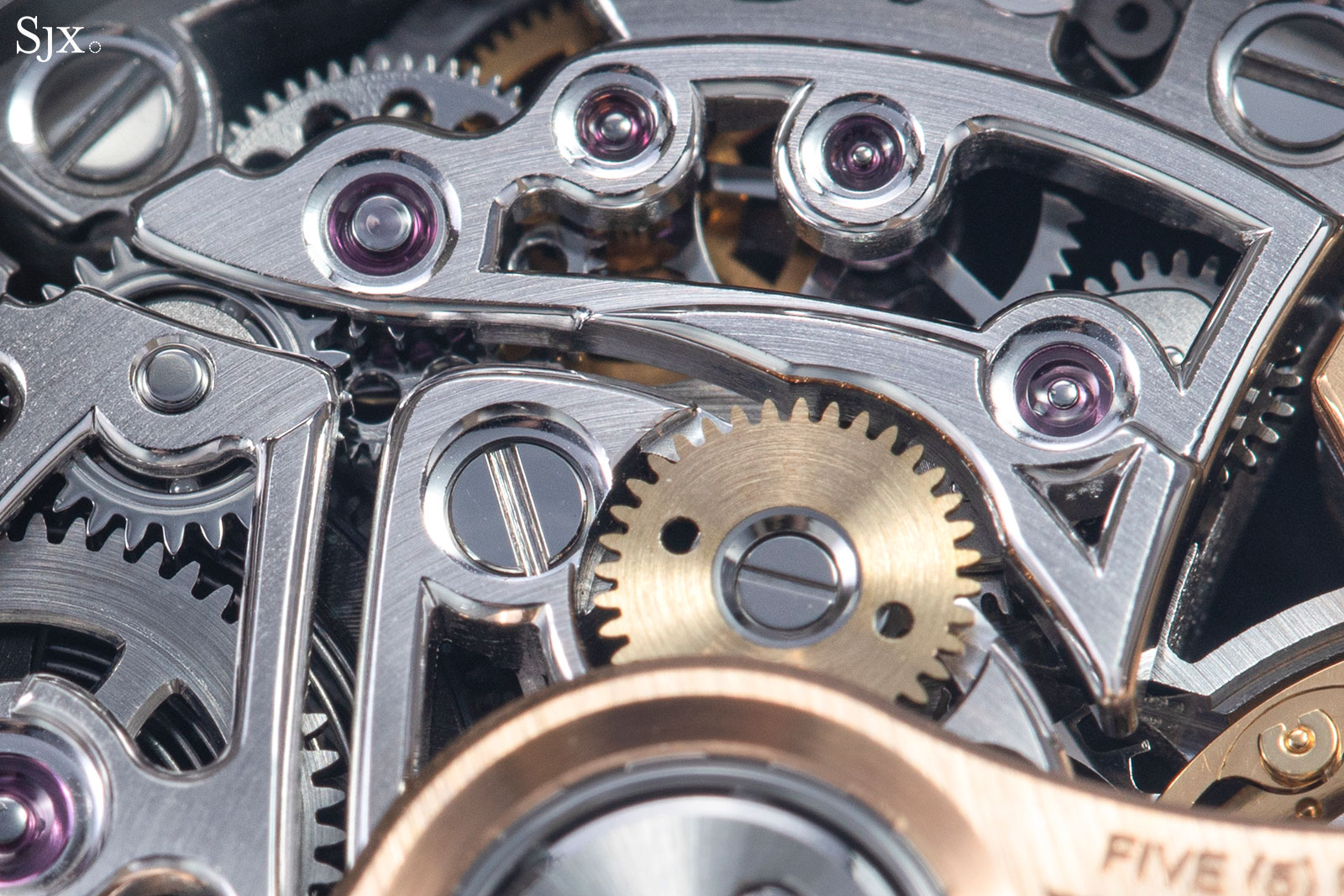 The bridge for the automatic winding wheels has eight sharp inward corners on its bevelling, despite its size

The case is 18k white gold, and set with baguette-cut diamonds on the front of both the case and bezel, as well as the crown. It’s just 37 mm, but it looks and feels lightly larger than it is.

The case does, however, feel a bit tall relative to the diameter. That is due in part to the thickness of the movement, but also the slightly higher bezel that is necessary in order to accommodate the diamonds. 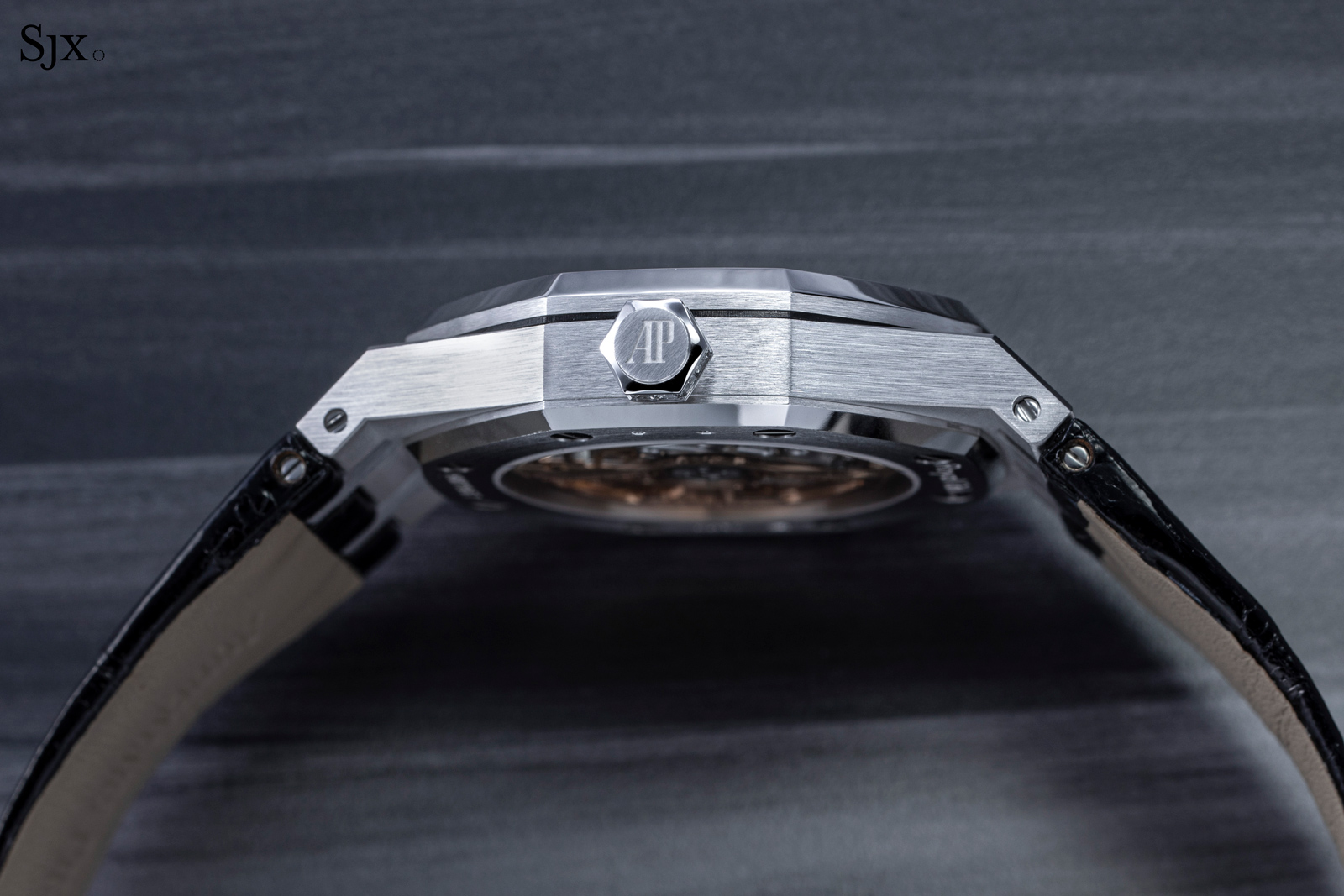 At first glance, the case looks naked because the sides are not set with diamonds. But that actually makes sense, just because this is a Royal Oak. Leaving some metal visible means a key characteristic of the Royal Oak is visible, which is the impressive case finishing. Here the brushed case flanks sit beside the polished bevels on the edge of the case, with a sharply defined border between the two. 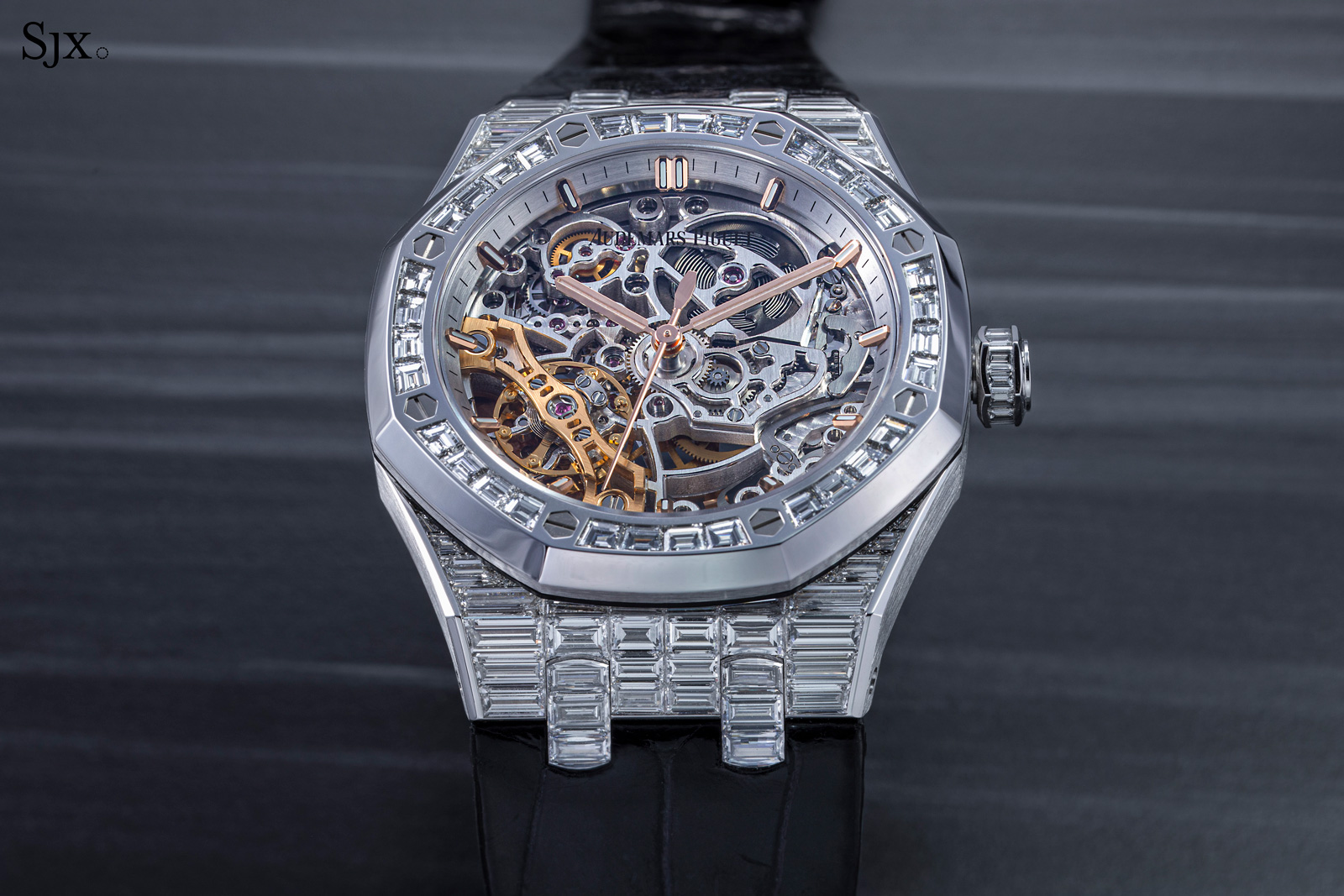 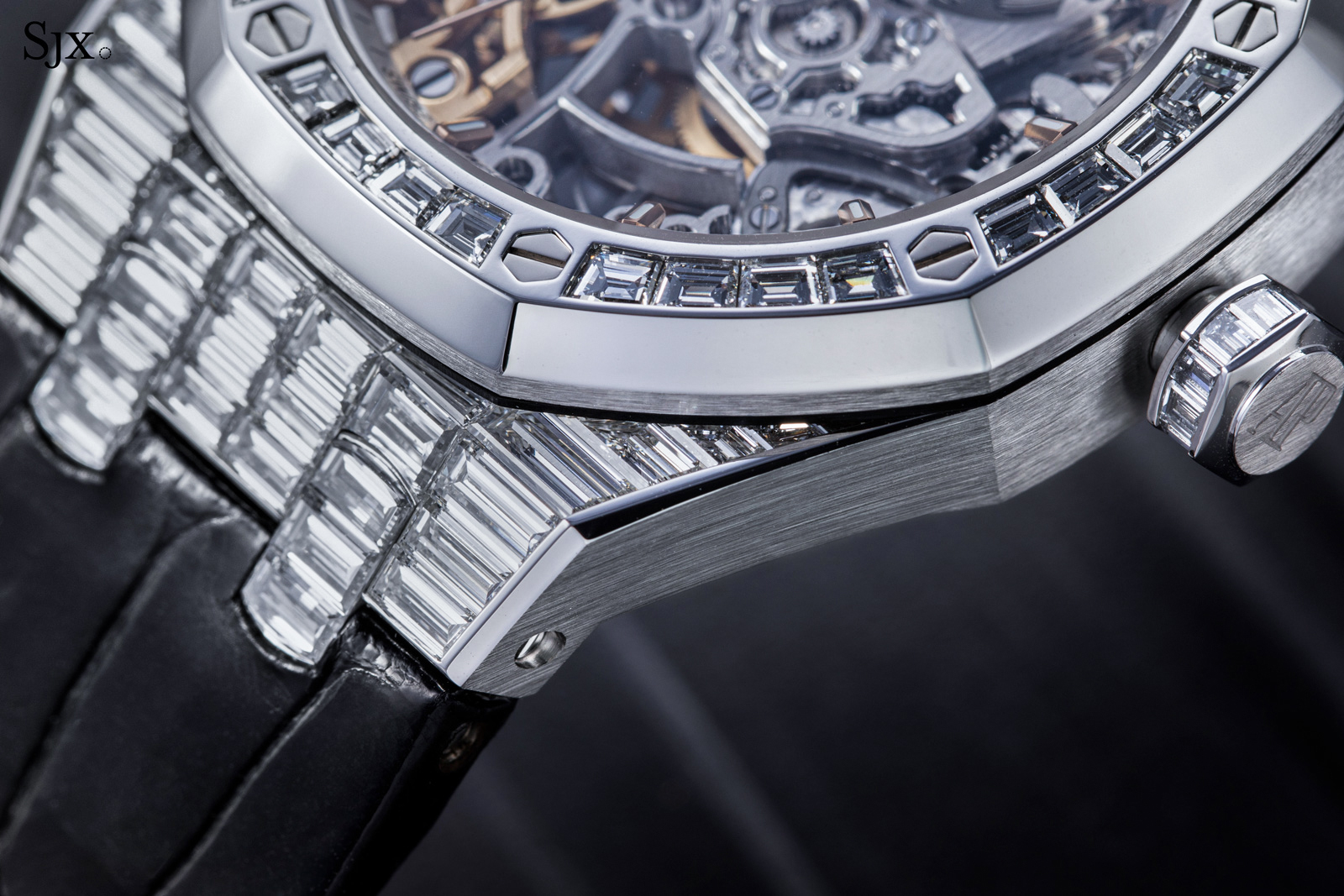 The diamond-set Double Balance Wheel is a watch for an occasion. Best described as extravagant-black tie, it is bold, but also elegant. And the movement is technically credible, making it a serious watch with a high dose of bling.

Limited Edition: No, but limited production
Availability: Only at boutiques
Price: On request