Having left behind the no-expense-spared focus on highly complicated movements, Cartier is returning to men’s watches in its signature case designs. The opening salvo was the warmly received Tank Cintrée launched at SIHH 2018, which has now become part of an entirely new collection, Cartier Privé.

Cartier Privé is a nod to Collection Privée Cartier Paris (CPCP), a line of high-end mechanical watches produced for a decade starting in 1998. CPCP was discontinued because of modest sales, but its absence seems to have made collectors’ hearts grow fonder. Certain CPCP models have since earned themselves a small fan base.

The CPCP line also included the tonneau, or barrel, a design that made its original debut in 1906. That makes the tonneau the second-oldest Cartier case design after the square Santos of 1904.

The Cartier Privé Tonneau Large Model is an extra-large, time-only watch modelled on the CPCP tonneau refs. 2802 H and 2803 H of 2005.

Like the Tank Cintree launched earlier in 2018, the large tonneau has a radial brushed finish on the dial, with raised Romain numerals and blued steel Breguet hands.

Inside is the 1917 MC, a small, in-house calibre developed primarily for ladies watches that fits the limited space within the barrel-shaped case. It is hand-wound with a 38-hour power reserve that

It’s available in platinum (ref. WGTN0005) as a 100-piece limited edition – with the trademark ruby cabochon on the crown – or in 18k pink gold (ref. WGTN0006) as part of the regular collection.

The Cartier Privé Tonneau Skeleton Dual Time is slightly larger, and inspired by the Tonneau Double Fuseau of the 1990s. While the original was powered by two separate movements, the Skeleton Dual Time boasts the in-house 9919 MC, which has a 60-hour power reserve.

The 9919 MC is a single movement, meaning one barrel, wheel train and regulator, that has twin, independent time displays. But the movement is also curved, which means the barrel ratchet and gear train wheels mesh at a slight angle.

The crown at two o’clock is for winding and setting, while the crown at four o’clock is actually a pusher that advances the second time zone on the lower dial in one-hour steps. 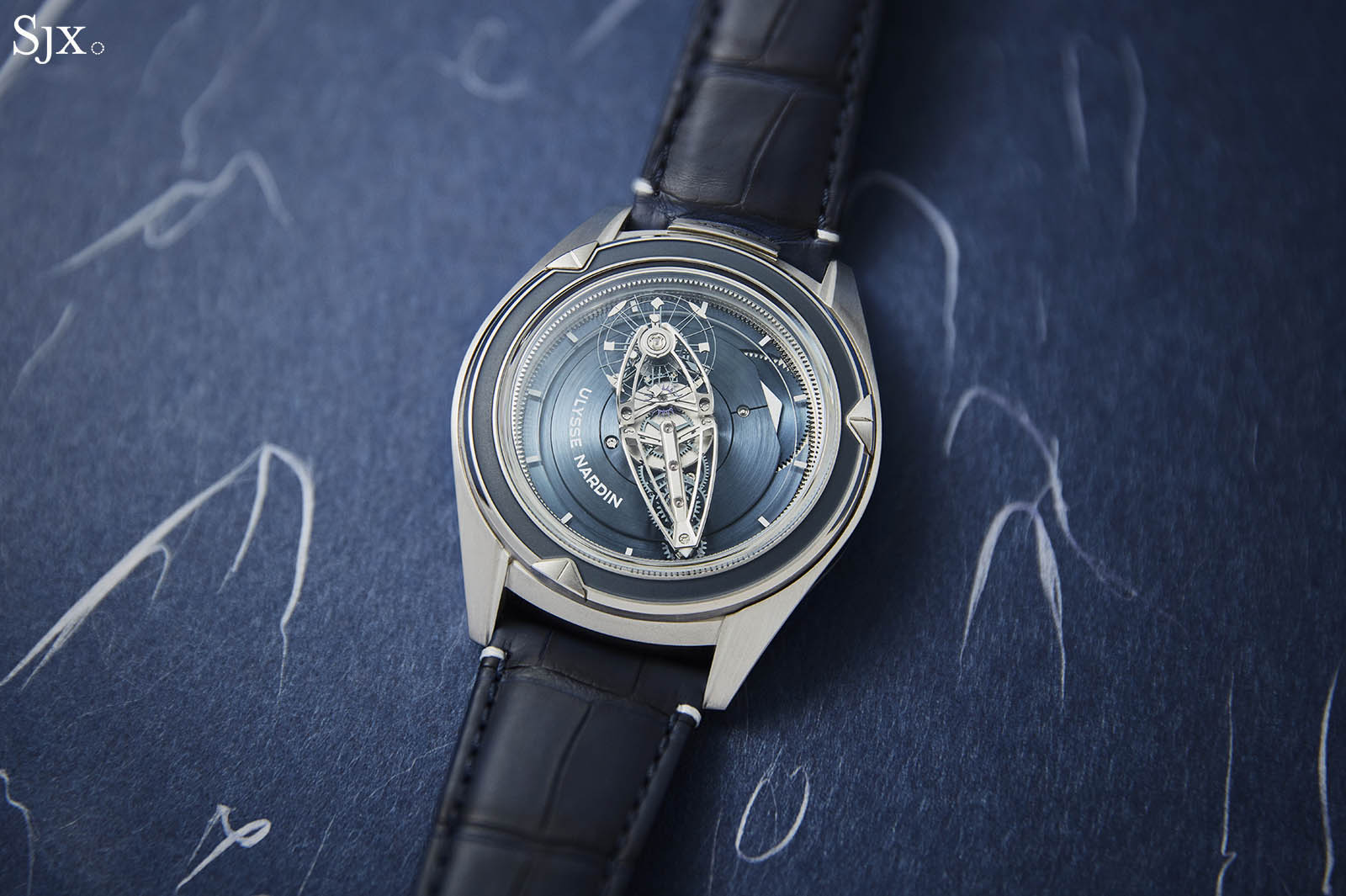 When Ulysse Nardin unveiled the Freak InnoVision 2 last year, the concept watch was the most cutting edge iteration of brand’s signature complication ever, the most radical Freak to date.

Despite boasting 10 innovations, including the friction-free Dual Constant Escapement and the ultra-efficient “Grinder” automatic winding system, the InnoVision 2 was a concept watch, destined to never reach a client’s wrist. The Freak of the future

The Freak Vision is a much needed update to Ulysse Nardin’s most important modern day wristwatch. And it also serves as a reminder that the original Freak was, in fact, a precursor to the exotic independent watchmaking of today.

When the first Freak made its debut in 2001, the flying-carousel wristwatch was unbelievably radical and cutting edge, hence the outlandish name.

The movement conceived by a stellar cast, starting with Carole Forestier, who imagined the tourbillon regulator, or more accurately a carousel, as an entirely new way of displaying time. Her concept of having a rotating movement surrounded by a giant mainspring won her the Prix Abraham-Louis Breguet in 1997, an award sponsored by Breguet to mark the 250th annivesary of Abraham-Louis Breguet’s birth. The inimitable Rolf Schnyder, then the owner of Ulysse Nardin, was so enamoured by Ms Forestier’s idea that he bought the patent. He handed it over to Ludwig Oechslin to refine and realise; Mr Oechslin notably put the mainspring under the movement instead of around it.

Now better known for having founded quirky independent watchmaker ochs und junior, Mr Oechslin was then the technical genius who realised most of the ambitions of the late Mr Schnyder, a remarkable entrepreneur who made his fortune making quartz movement in Asia.

But Mr Schnyder dreamt of more than a watch with a fancy movement, he wanted to bring watchmaking into the 21st century.  Thanks to Mr Schnyder, the Freak was the first wristwatch to incorporate silicon parts in the movement, a seemingly pedestrian achievement with the proliferation of silicon today but earthshaking at the time.

But that was 17 years ago, and 17 years later the Freak needs an update to remain as radical as it once was. And so the baton has been handed to the Freak Vision.

On the cutting edge

The original Freak had neither hands nor a dial, but instead a baguette-shaped movement that rotated once per hour and doubled as the minute hand. The movement sat on top of the dial, itself mounted on a huge coiled mainspring that occupied almost the entire case, giving it a one-week power reserve.

More importantly, the Freak boasted a Dual Direct escapement based on Abraham-Louis Breguet’s natural escapement, or échappement naturel, which had two escape wheels that meshed with each other but ran irregularly, due to play between the gear teeth that were inevitable given the manufacturing tolerances in the 19th century.

Consequently Breguet never implemented his invention widely, but the natural escapement has been the inspiration for latter day watchmakers as diverse as Voutilainen, Laurent Ferrier and Derek Pratt. The second generation double escape wheels in the original Freak The Ulysse Nardin Dual Direct escapement solved Breguet’s tolerance problem by replacing traditional metal parts with precisely formed silicon components produced via deep reactive ion etching (DRIE). Not only were silicon, or silicium, parts exactly the right shape, the material promised a watch movement that would maintain its rate across a range of temperatures, and being impervious to magnetic fields while requiring infrequent servicing.

Thanks to pioneering partnerships with the Swiss Center for Electronics and Microtechnology (CSEM) and micro-engineering outfit Mimotec, Ulysse Nardin was able to bring silicon components to market well in advance of industry titans like Rolex, Omega and Patek Philippe (which also funded CSEM). In short, the Freak ushered in the age of silicon in horology.

Since then, Ulysse Nardin has introduced numerous further refinements and innovations in silicon. The first hairsprings etched from synthetic diamond via DRIE were unveiled, followed by an updated Dual Direct Escapement boosted to run at 4Hz in 2005.

The updated escapement wheels had 18 teeth each, compared to the five in the first generation version, for greater stability. And DIAMonSIL, silicon coated in synthetic diamond, was introduced in 2007.

But despite all these developments, all Freak watches remained quaintly hand-wound, with the mainspring wound by a somewhat unwieldy notched case back.

An exercise in practicality

While taking into account all of that grand history, the Freak Vision combines both the best of Ulysse Nardin’s latest innovations as well as an eye towards wearability.

In a marked departure from tradition, the cal. UN-250 in the Freak Vision boasts the Grinder self-winding mechanism, making it the first automatic Freak. The Grinder involves a complex assembly of ball bearings, springs and reduction gears, which according to the brand, makes it twice as efficient as a conventional automatic winding mechanism. Like the large sail winches nicknamed “grinders” that are found on racing yachts, the Grinder mechanism relies on a reducing gear to wind the mainspring barrel more efficiently. But the key innovation of Grinder is a flexible, open-worked frame with four arms that connects the peripheral rotor to the winding wheel for the barrel. A cross section of the Grinder mechanism. Image – Ulysse Nardin

Each rotation of the oscillating mass causes one of the four arms on the frame to turn the winding wheel, somewhat like a IWC Pellaton winding mechanism on steroids. The four arms offer exceptional efficiency, twice as efficient as conventional automatic mechanisms ascending to Ulysse Nardin. That significantly reduces the need for hand-winding, though it remains available by turning the notched case back. While the InnoVision 2 was equipped with the experimental Dual Constant Escapement – a silicon-based constant force escapement with twin escape wheels – the Freak Vision instead incorporates the tried and tested Ulysse Nardin Anchor escapement first unveiled in 2014. The Dual Constant Escapement inside the InnoVision 2

It is also constant force and made mostly of silicon, but utilises only a single escapement wheel. Both escapements are conceptually similar to Girard-Perregaux’s Constant Force in the sense that they use the elasticity of silicon to provide constant force.

The Anchor Escapement consists of a circular silicon frame that holds the lever in place. Instead of a pivot, two perpendicular, buckled blades of silicon on both sides of the frame converge at the pivot point of the lever. The buckled blades flex between fixed ends, ensuring a very precise and constant transmission of energy between the escape wheel and the balance regardless of the torque from the mainspring. Furthermore, the movement also incorporates a new balance wheel that is lightweight and high performance. Already lightweight in silicon, the balance wheel also gets rid of the traditional gold regulating weights, replacing them with nickel inertia blocks that are lighter, increasing its efficiency and the movement’s power reserve. In addition, the balance is also fitted with self-regulating silicon micro-blades that use air resistance to stabilise its amplitude and increase accuracy.

Notably, unlike earlier Freaks, the cal. UN-250 features a gear train made of silicon – meaning all of the wheels are silicon – which minimises energy loss due to friction, since silicon is almost friction-free, thus enhancing power transmission. While the Freak Vision tells time with the traditional baguette-shaped movement that rotates once per hour, the silicon gear train is held in place by a pair of skeletonised, delta-shaped central bridges that were inspired by the hull of a boat, giving the movement a lighter, trimmer look.

It also gives the movement a more elegant feel, despite its obvious high-tech nature, while making for a clearer and more legible design.

The colour palette of the movement is also restrained, with the main plate being a metallic blue, while the open-worked bridges in the centre finished in frosted rhodium. All of the jewels are also clear, instead of the conventional red, which accentuates the clean styling of the movement. But technical advancements aside, the Freak Vision is tangibly a leaner and cleaner watch. In short, it is significantly more wearable.

Measuring 45mm wide, the case has short lugs and no crown, giving it a smaller footprint than cases with similar diameters. Its made of platinum, something that’s apparent in its weight, and fitted with a thin bezel made of titanium with a blue rubber insert and three titanium riders for time-setting. The rubber bezel insert has become a trademark of the Freak watch case, although inexpensive nature of rubber feels incongruous with a top of the line, high-tech wristwatch. The case back is titanium to help keep its lightweight, while the crystal is a domed, “box-type” sapphire that enables the Freak Vision to accommodate the height of the movement while having a thinner case band, and consequently a slimmer profile on the wrist.

Priced just shy of US$100,000, the Freak Vision is without a doubt the most advanced Freak to date. But it is also moderately priced; in other words, there were less interesting Freak models that cost more.