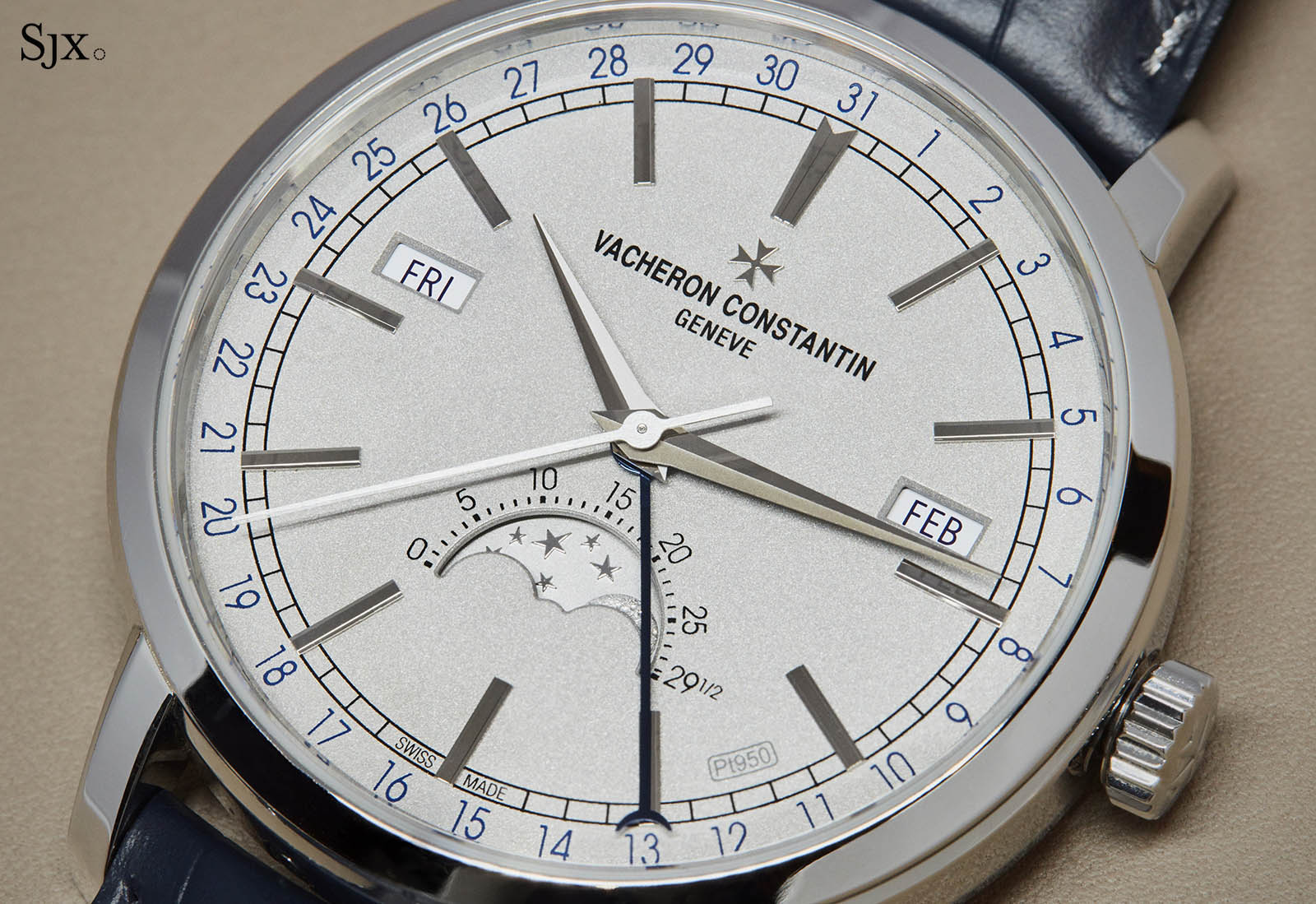 Over the past year, Vacheron Constantin has revived, in earnest, a classic mid-century complication – the triple calendar. The brand’s triple calendar offerings now range from the FiftySix to the retro Historiques 1942 and 1948, and most recently, the all-platinum Traditionnelle Complete Calendar.

While the first Vacheron Constantin calendar wristwatches can be traced back to the 1920s, the 1940s and 1950s were the golden age of the complication that indicates the day, date and month, and occasionally the moon phase. CEP means the watch gets the full platinum treatment, which in this case means the case, dial, moon phase disc, buckle, and even platinum and silk thread for the strap.

The CEP watches all share a signature feature: the distinctive frosted, silvery dial bearing a small but prominent “Pt950” hallmark between four and five o’clock. While the dial is platinum, the hands and hour markers are 18k white gold.

But perhaps what marks the dial out as truly special is the moon phase disc in platinum, with the crater-dotted moon and stars in relief. The calendar display is traditional, with the date track on the periphery of the dial, indicated by a central pointer, while the day and month are located in separate apertures. But instead of having a pair of in-line apertures located just below 12 o’clock as is common, the apertures are each on two extremes of the dial, which in consequence appears cleaner. Another signature feature of the CEP line is its muted colour palette, thanks to the liberal use of platinum. It’s mated with the date track in blue, while the date pointer is blued steel. The rest of the dial markings are a discreet black, making overall legibility good.

Its understated, yet striking, monochromatic colours give the Complete Calendar CEP a distinct modern feel, in contrast to the brand’s other triple calendar watches that are vintage-inclined.

Also in platinum, the “Etagé” case features straight, angular lugs and a screw-down back with a fluted rim. It’s 41mm in diameter and 10.72mm high, giving it relatively elegant proportions. But the use of platinum makes it as hefty as such a watch can be.

Mechanically the CEP calendar is identical to the standard model, being powered by the cal. 2460 QCL, which is the brand’s top-tier self-winding movement with a calendar module on top. The movement runs at 4Hz and has a 40-hour power reserve. One of its characteristic features is the attractively constructed hack seconds mechanism that sits just adjacent to the balance wheel. The hack seconds mechanism visible to the left of the balance

The calendar mechanism is straightforward, built to run on 31-day months. So it must be manually corrected at the end of every month with less than 31 days, unlike an annual or perpetual calendar that can take into account months of different lengths.

Advancing the display to the first of the following month is thus done five times a year at the end of February, April, June, September and November. The moon phase, on the other hand, will deviate by a day after 122.5 years, which is the de facto standard in modern watchmaking.

Notably, the movement is the only aspect of the watch that lacks a platinum alloy addition; a winding rotor in platinum would have been logical but it is nonetheless in 22k gold and appealingly engine-turned. Like all mechanical Vacheron Constantin movements, the cal. 2460 QCL bears the Poincon de Geneve, or Geneva Seal, a hallmark of decorative and functional quality administered by the canton of Geneva. That means the movement is appealingly decorated, albeit optimised for production in series and at scale. A particularly attractive detail is the use of varying and suitably sized perlage for the different sections of the base plate.