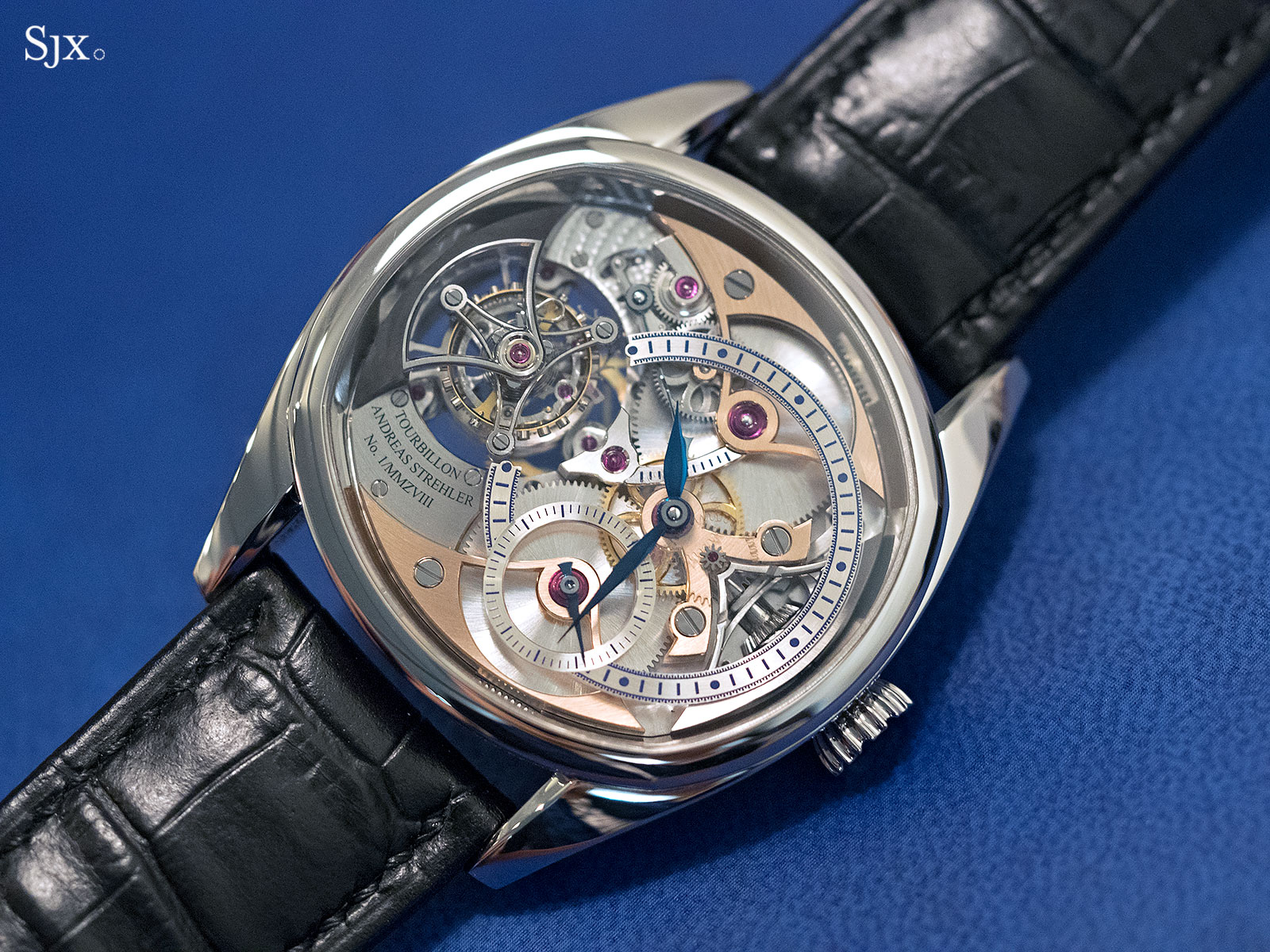 Andreas Strehler is an independent watchmaker whose past work has been inventive and replete with lyrical details, qualities that are tangible in the Trans-Axial Tourbillon. Its key feature is the remontoir d’égalité that sits on the same axis as the tourbillon, hence the name.

Though the watch is Mr Strehler’s first tourbillon, its fundamental concept is not a new one. The Trans-Axial Tourbillon features a tourbillon regulator with a constant force mechanism, in this case a remontoir d’égalité, a tiny spring that winds up and discharges every second, providing an identical amount of energy to the escapement each time. Other watchmakers have done the same, most famously Francois-Paul Journe with his signature tourbillon.

Mr Strehler has constructed his movement in an unusual manner, both visually and technically. That’s accomplished despite the fact that the movement combines complications he has used in other watches, like the remontoir from the Sauterelle, as well as the base movement found in the Papillon d’Or wristwatch introduced three years ago.

There is a lot to take in with the movement, on a scale both large and small. It is symmetrical, front and back, with a repeating motif of rounded and arched forms on the bridges and wheels. Two large barrels – which total 78 hours in power reserve – occupy most of the top and bottom halves of the movement, while the tourbillon regulator sits at nine o’clock. 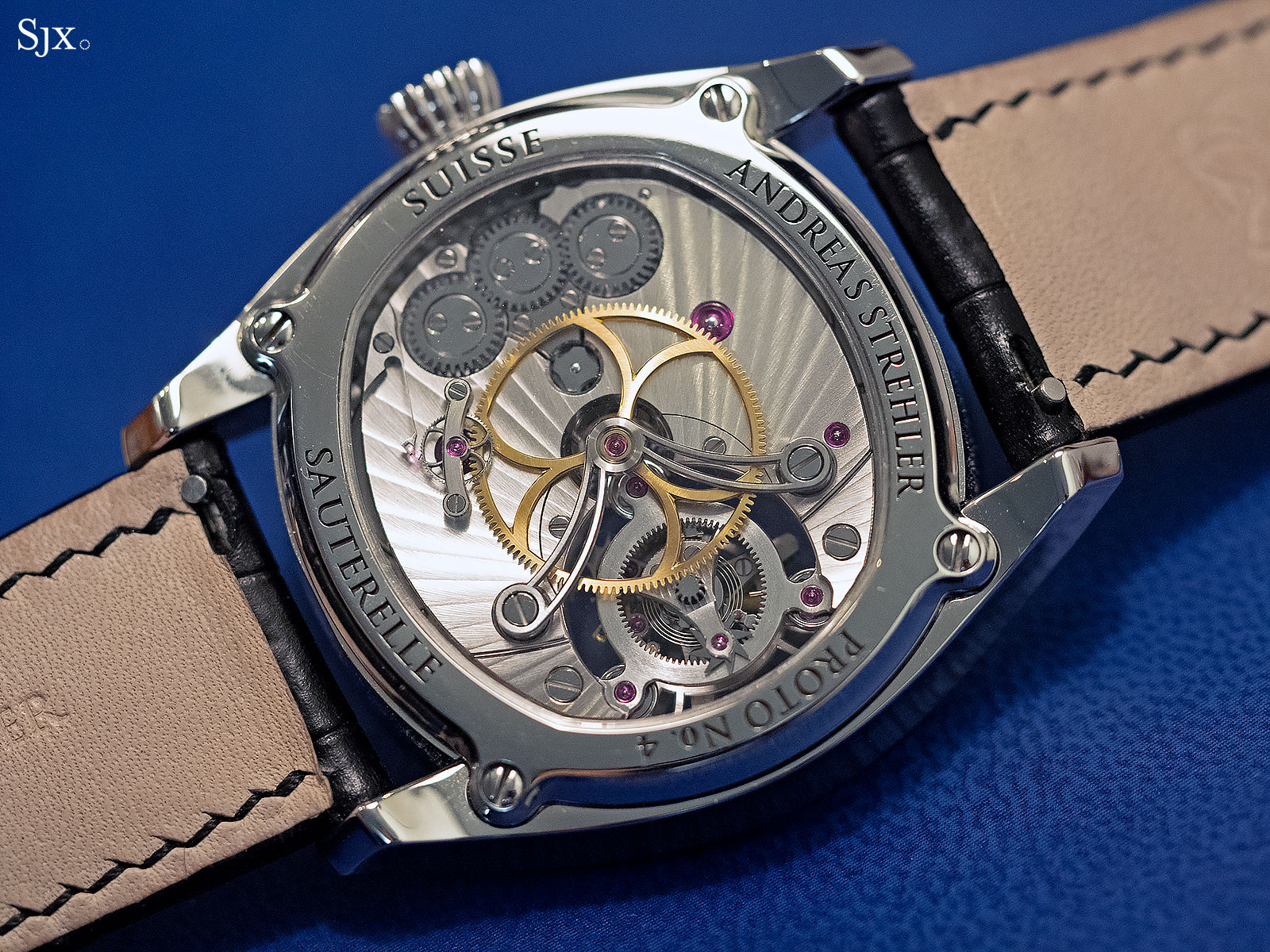 Pictured is a prototype, hence the “Sauterelle” case back.

Three large 18k rose gold bridges take pride of place in front. In fact, Mr Strehler used clear sapphire wheels that are almost invisible to drive the hands, so as not to obscure one of the gold bridges. Almost as invisible is the power reserve display, one driven by a small differential no less, that points to a scale just adjacent to the canon pinion of the hour and minute hands. 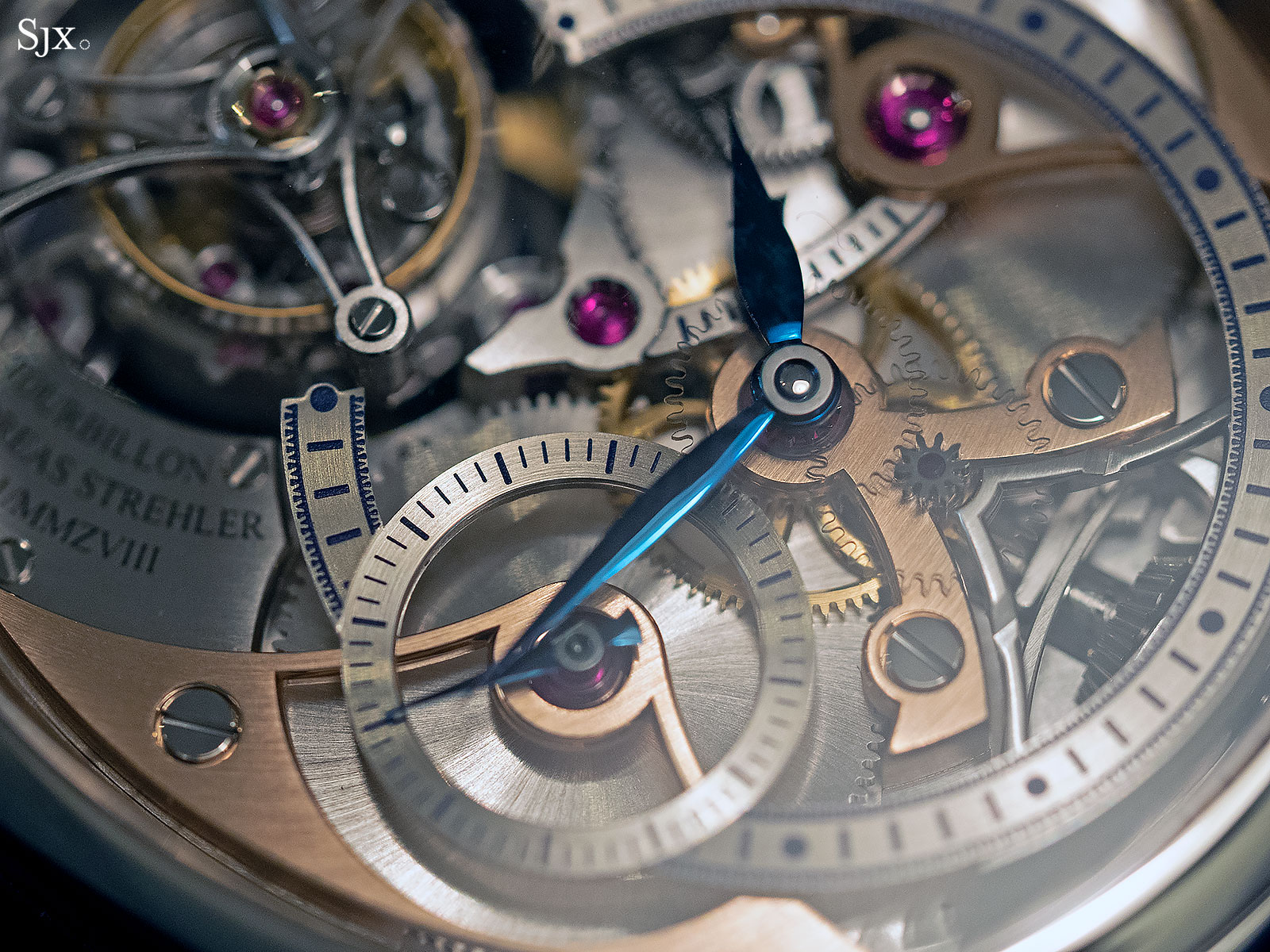 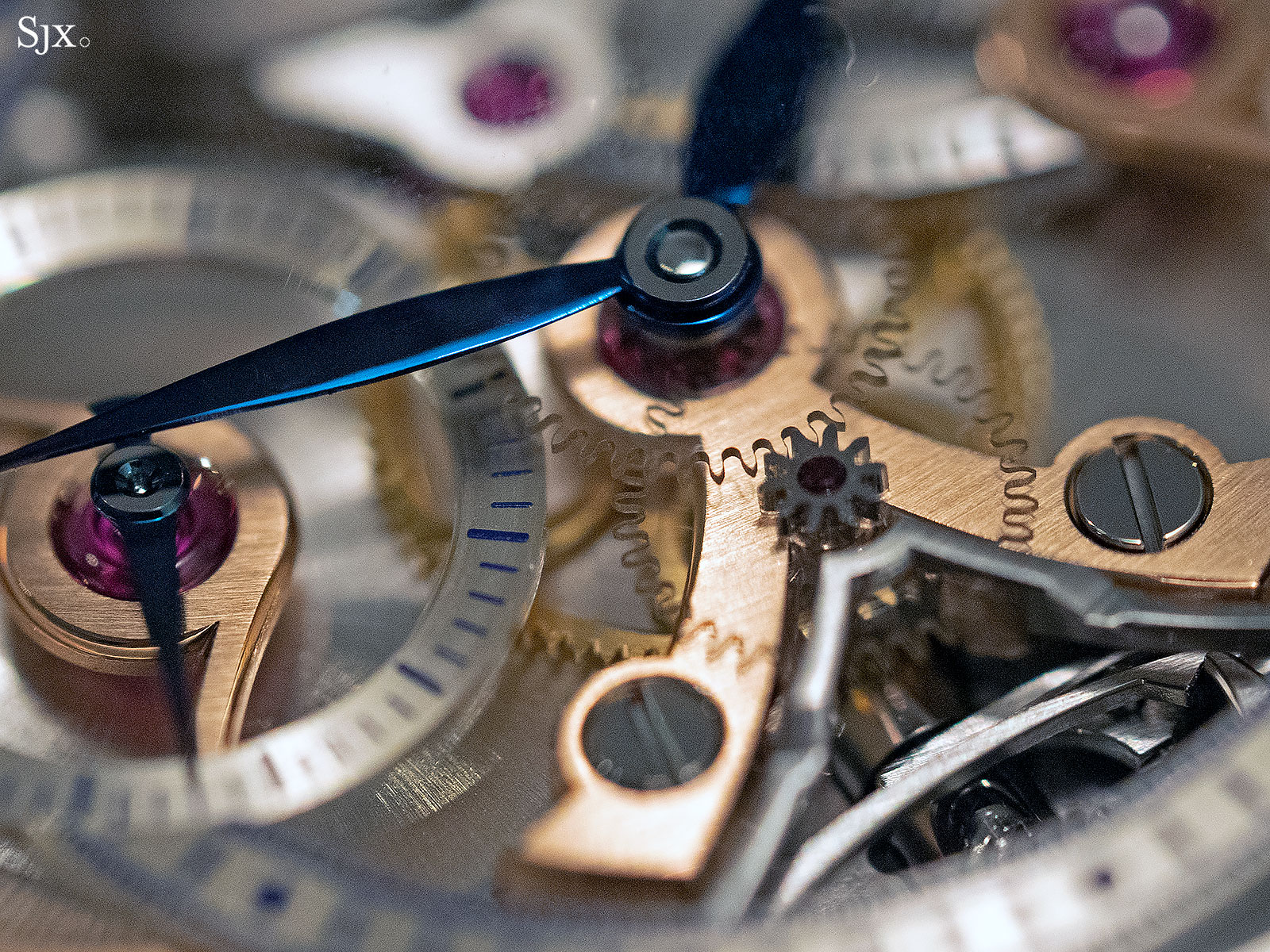 More apparent is the high level of finishing found on every component of the movement. While not quite as lavish as the fanatical decoration found on a Philippe Dufour, the finishing is neat, careful and refined, reminiscent of Romain Gauthier and A. Lange & Söhne. 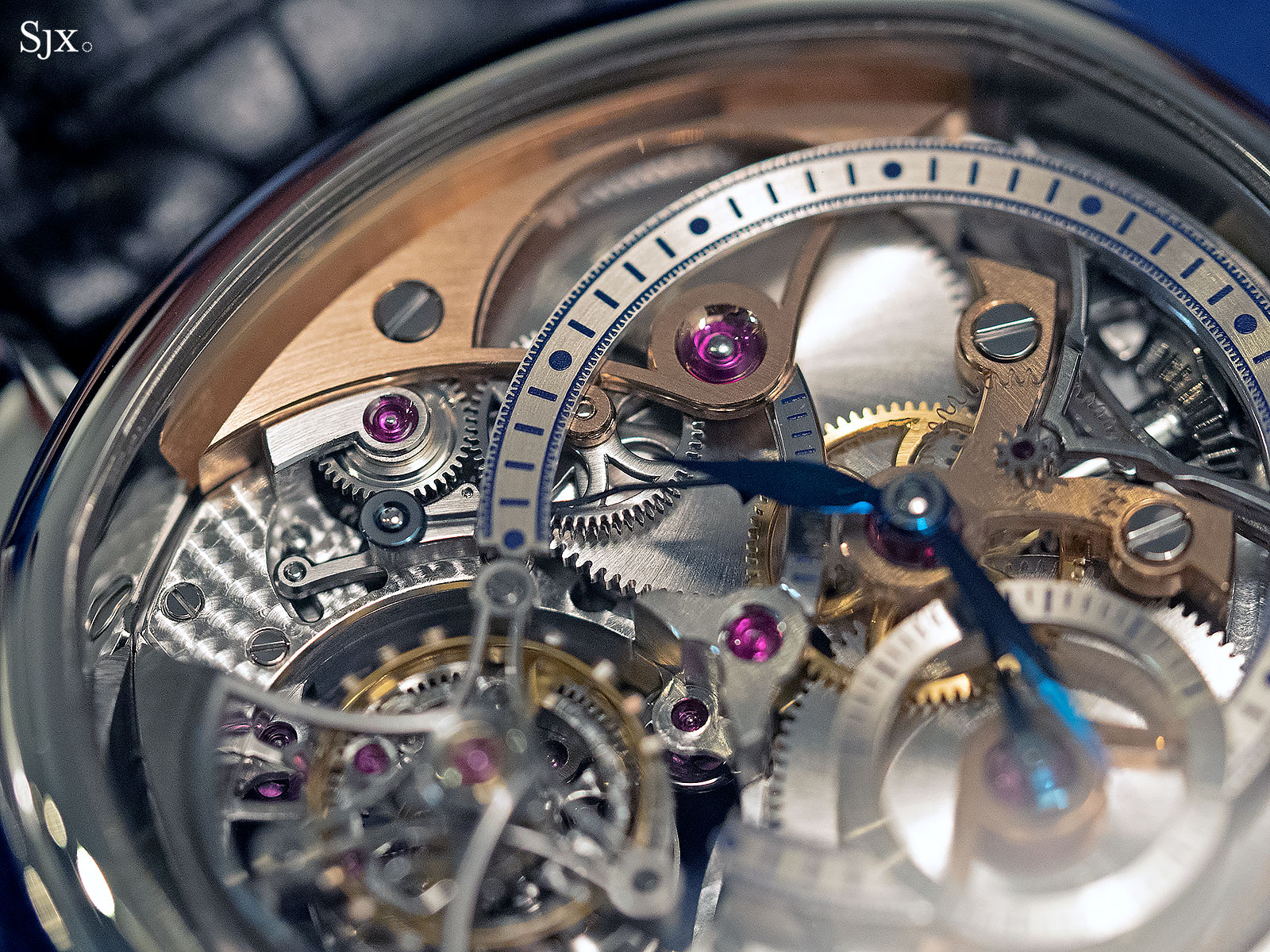 And of course there’s the elegantly effective constant force mechanism. The tiny spring of the remontoir d’égalité sits under the tourbillon, on the same axis. Energy from the two mainsprings, which unwind in parallel, is transmitted via an oversized, gilded wheel to the constant force mechanism. It relies on a “pallet arm”, essentially a lever with a ruby pallet at its end, that blocks one tooth of the star wheel momentarily, releasing it as the pallet arm moves forwards. As the tooth is released, the star wheel turns by one step, winding the remontoir spring. 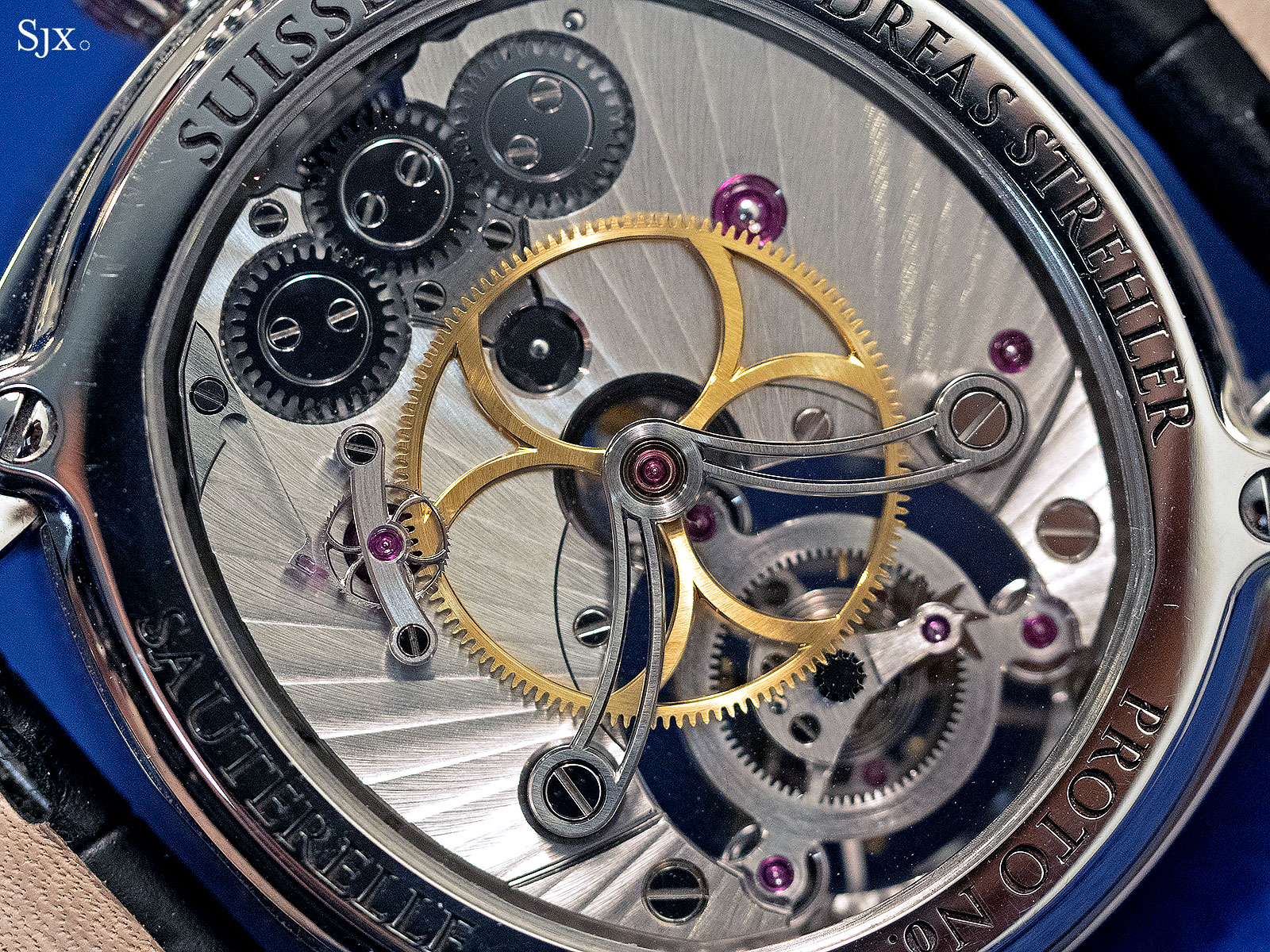 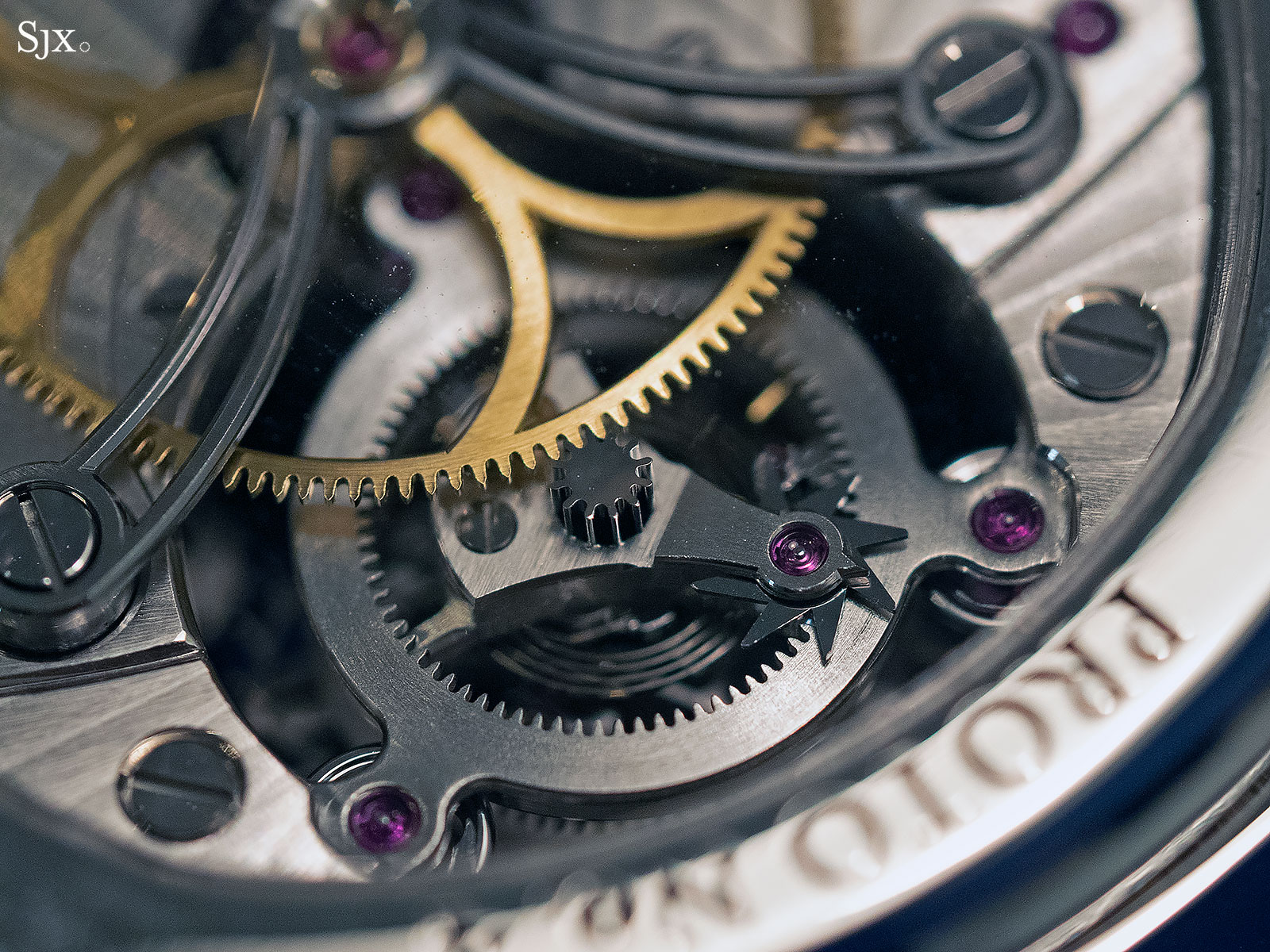 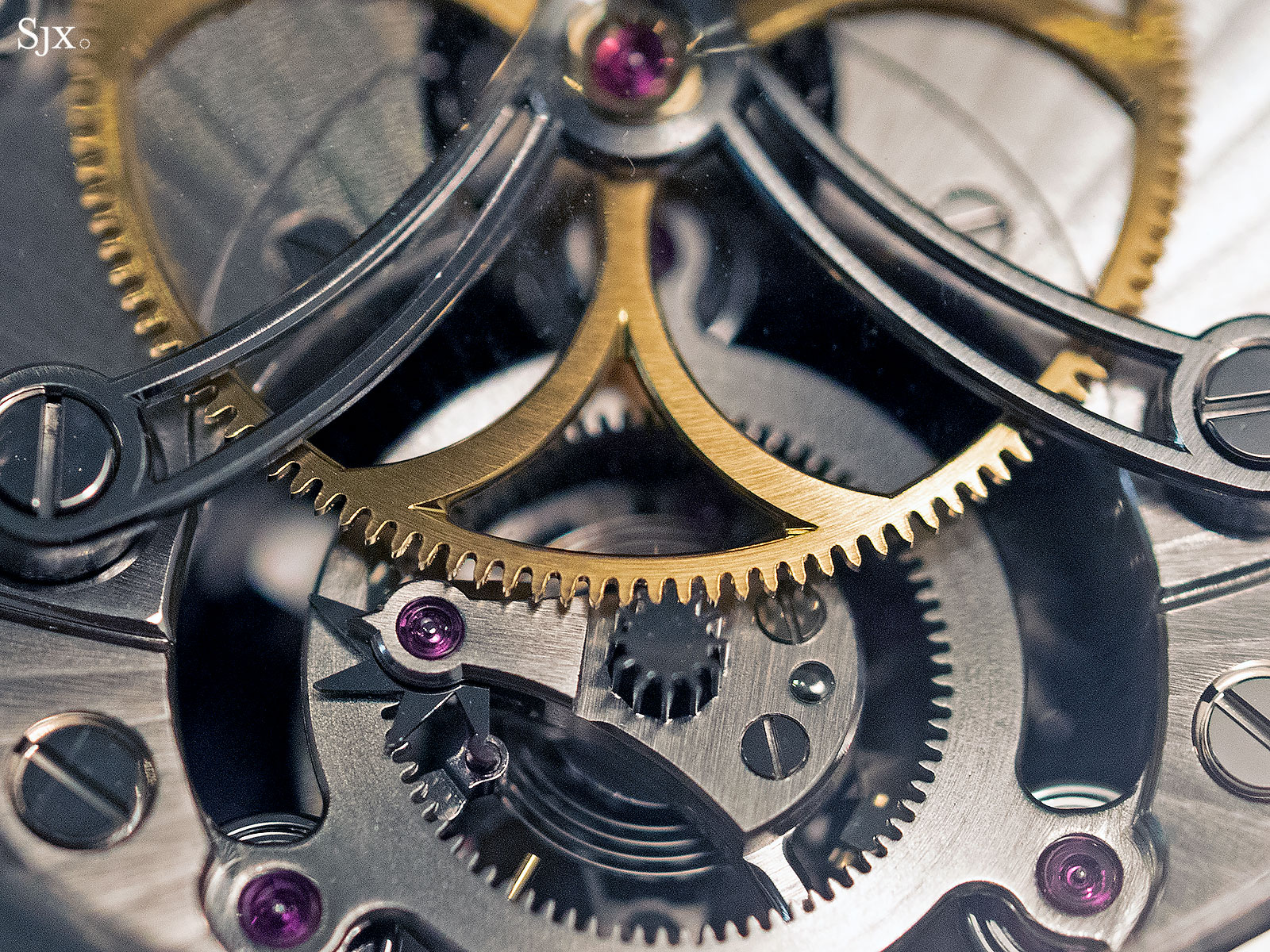 While the remontoir d’égalité is not new, having made its debut in the Sauterelle, the tourbillon is, though it might look familiar to some.

There’s a hint of H. Moser & Cie. in the tourbillon cage, due to Mr Strehler’s heavy involvement in developing Moser’s early calibres, most notably the concise perpetual calendar. Amongst Mr Strehler’s inventions is the “Dragon Lever” that “adjusts the banking of the anchor”. That distinctive feature is found both in the Trans-Axial Tourbillon and in some of Moser’s movements. 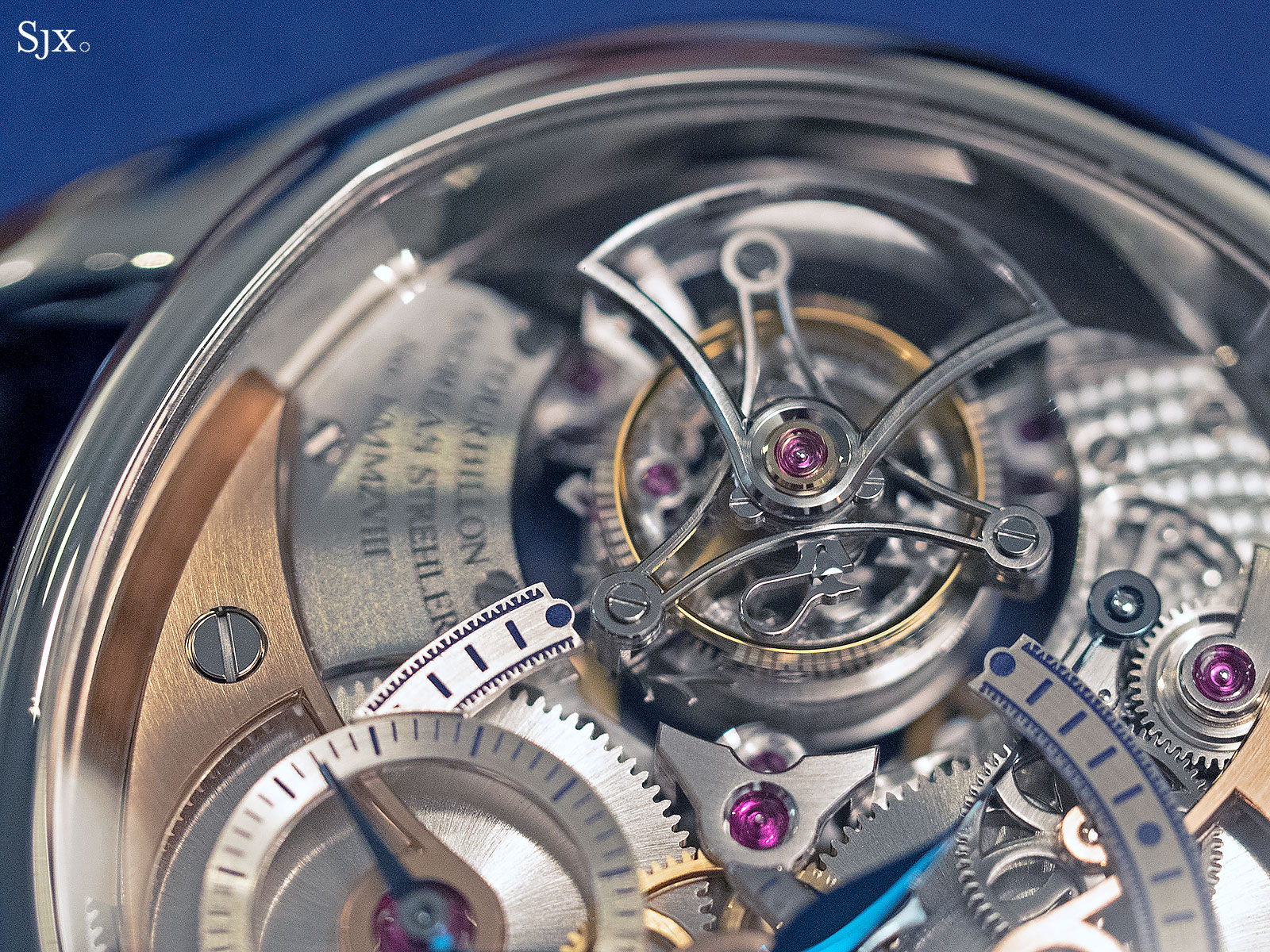 Ironically, though many of the finer elements of the Trans-Axial Tourbillon are intricate and refined, the watch itself is fairly large. The case is the elongated cushion form that’s Mr Strehler’s signature, and it’s 41mm in diameter. It sits as large as an oblong 41mm watch would on the wrist, with colours and detail that make it stand out immediately. 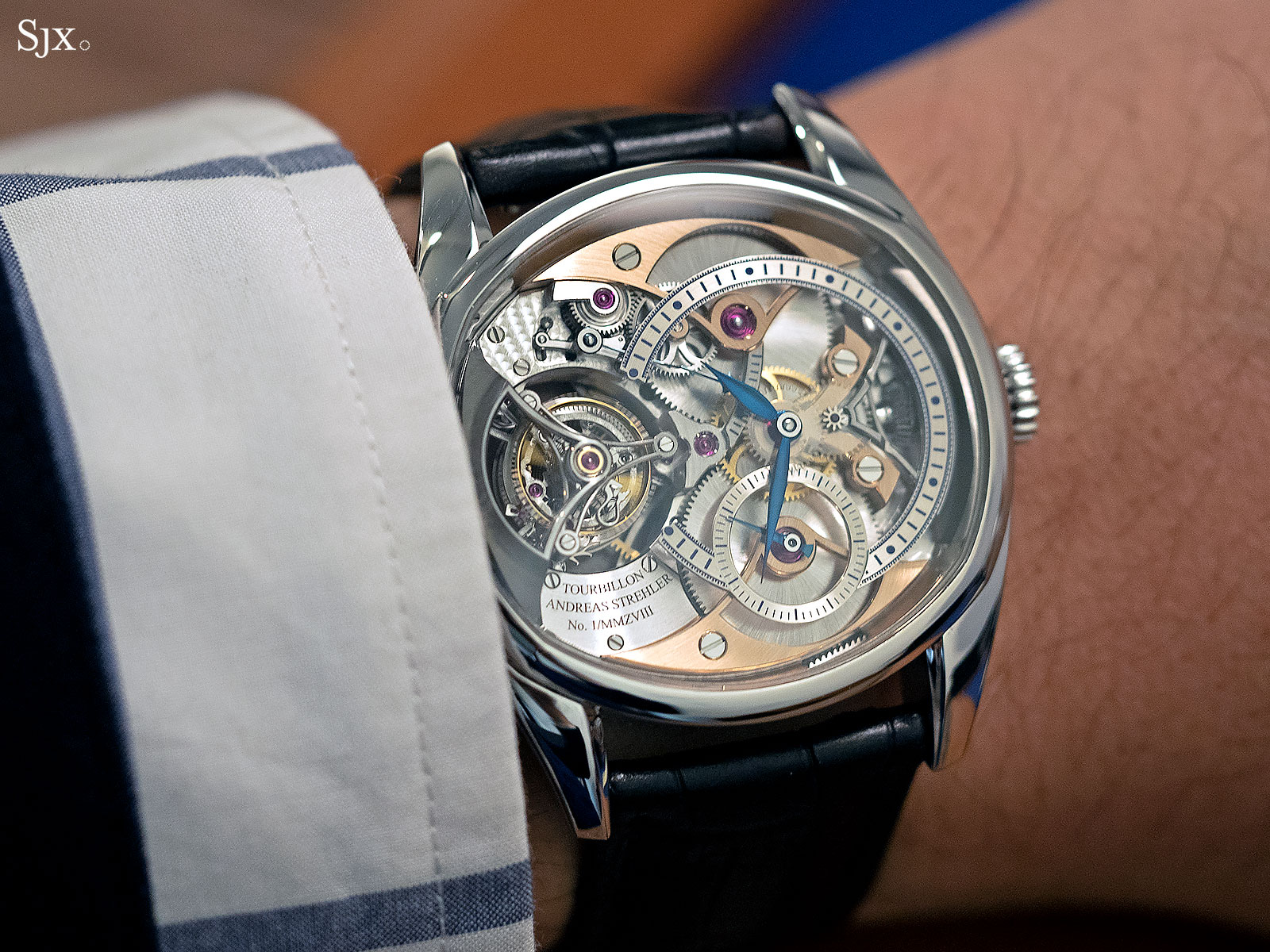