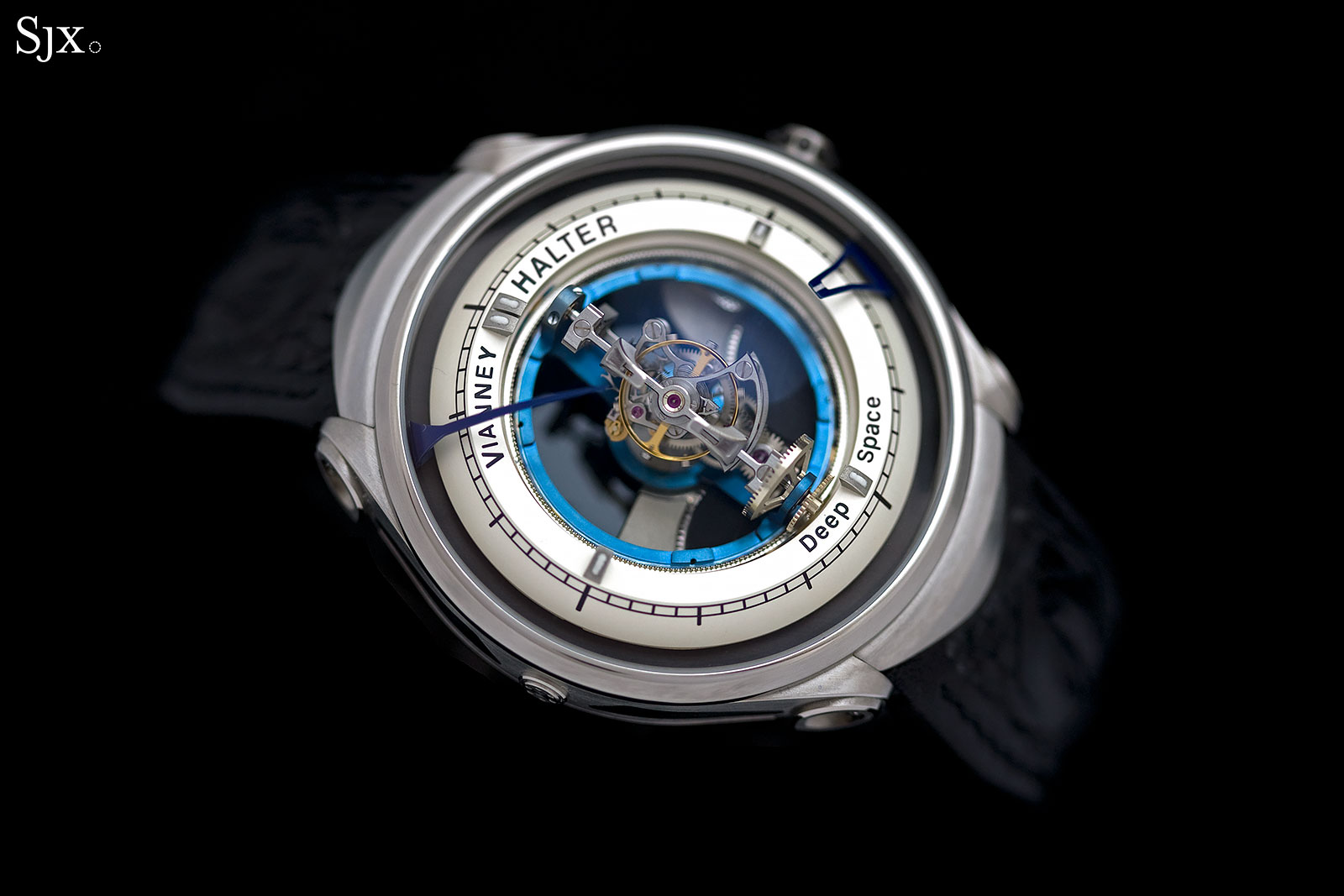 Vianney’s seminal watch was the Antiqua perpetual calendar of 1998, the first watch of a series that in his signature steampunk style, heavily reminiscent of Jules Verne. But now Vianney has turned the page and stepped into the future with the Deep Space Tourbillon.

Resembling a space station – notably Deep Space Nine of Star Trek – the Deep Space Tourbillon has three carriages. The innermost cage makes one revolution in 40 seconds, the second in six minutes, and the largest and outermost takes 30 minutes to complete one revolution. Here’s a video clip of it in action.

Under an enormous domed sapphire crystal is the equally large tourbillon, in an opening right in the centre of the watch, with the barrels partially visible below. Surrounding the tourbillon is the chapter ring for the minute track, and on the periphery are a pair of curved, blued steel hands, with the larger one indicating the hours. Being so large, the tourbillon cage is impressive. Other triple axis tourbillons, like the JLC Gyrotourbillon or Greubel Forsey Double Tourbillon, are not nearly as engaging because they are smaller. The watch pictured is a prototype so the finishing is not complete, but even on the final production piece the movement finishing for the Deep Space Tourbillon is unlikely to be as elaborate as that of the competition since that is not traditionally Vianney’s forte. Vianney’s earlier creations had incredibly detailed cases and dials that are arguably unparalleled in independent watchmaking. As it is the Deep Space Tourbillon does not equal the Antiqua and its brethren in terms of case and dial work, though the final product might be different. There are almost zero visual reminders of the steampunk style of the Antiqua, save for the crown, which is reminiscent of the rivets used for the Antiqua and family. Though the watch is large at 46 mm in diameter, it feels and looks smaller, making it easily wearable. And because the case is titanium, it weighs only 90 g. The VH 113 movement is manually wound, with a 55 hour power reserve. Delivery will start in the second quarter of 2014, with a retail price of CHF190,000 without tax in Switzerland, and S$291,000 including 7% tax in Singapore. Enjoy the rest of the photos below. – SJX