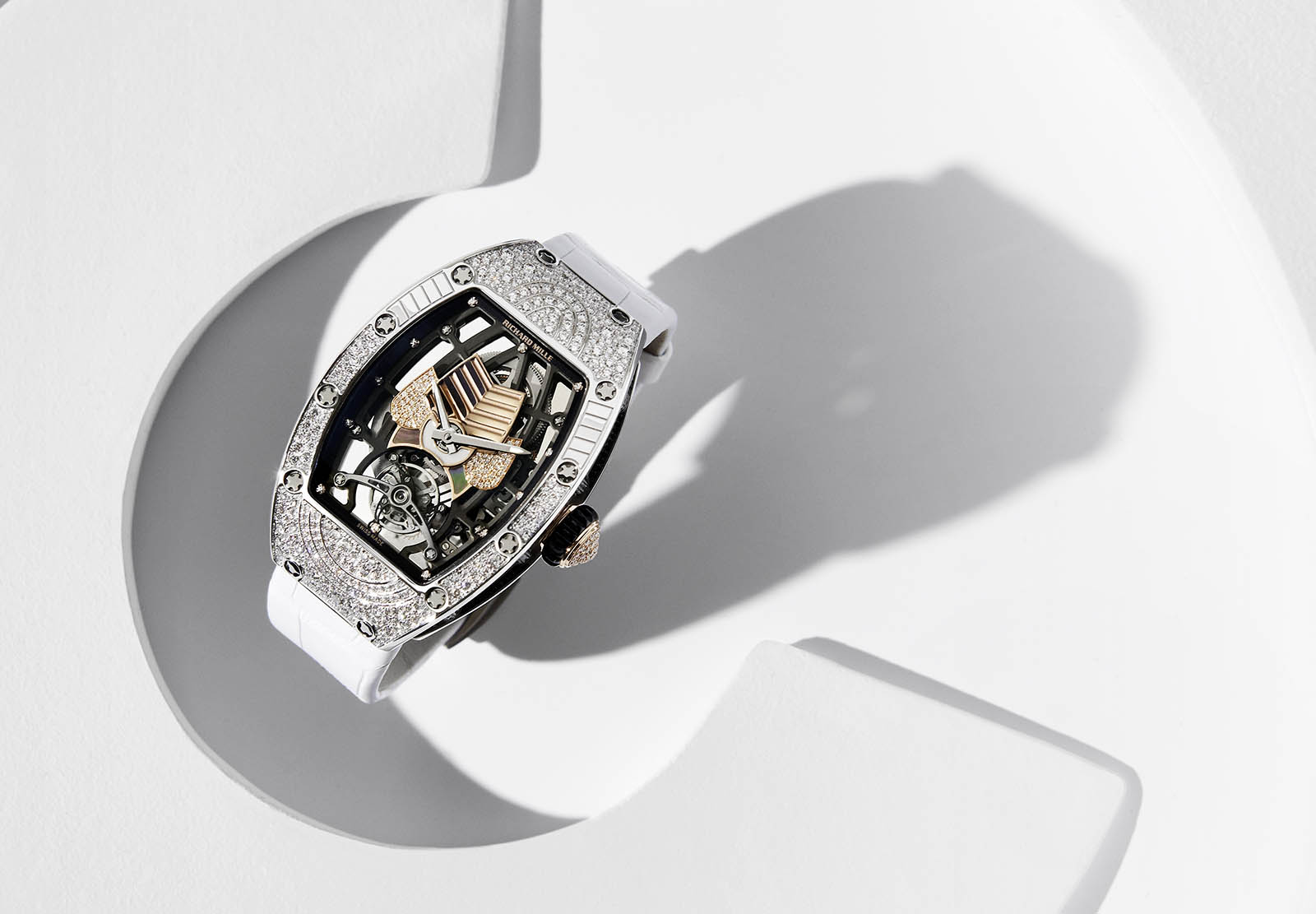 Women’s watches have been crucial to Richard Mille, having been amongst the first to enter the segment with highly technical styling in the form of the RM 007 back in 2005. The new RM71-01 Automatic Tourbillon Talisman marks the pinnacle of the range.

While the ladies’ watches of Richard Mille have been met with great success in the past, they were always designed by men. A heady yet nuanced timepiece, the RM71-01 is the first Richard Mille watch designed by a woman – Cécile, daughter of Dominique Guenat, Mr Mille’s business partner. Now the Ladies’ Collection Director at Richard Mille, Ms Guenat in 2015 in the brand’s jewellery department, after a spell at a British jeweller, creating collections for couture houses. Ms Guenat’s creation is inspired by Art Deco and tribal art, explaining the geometric motifs on the case and dial. The case decoration is the result of a two-step process: the motif is first stamped and then adorned with snow- or grain-set diamonds. The banded motif is echoed in engraving on the case back.

The complex dial plate is made of red gold and measures a mere 0.9 mm in height. It’s inlaid by hand with mother-of-pearl, onyx and diamonds, creating a beautiful interplay of lines and textures intended to evoke tribal artefacts and tiaras. But the RM71-01 is not just a jewelled timepiece, it also marks the debut of Richard Mille’s first in-house automatic tourbillon movement, the cal. CRMT1. With bridges and baseplate made of titanium, the skeletonised movement weighs a mere 8g.

Like many Richard Mille calibres, it’s equipped with a “variable-geometry” rotor, that can be adjusted to wind at a rate suited to the wearer’s physical activity. Despite being just 6.2mm high, the CRMT1 withstands shocks up to 5000G. The caliber offers a 50-hour power reserve. The RM71-01 is available in 10 different dial and case designs, each limited to 10 pieces. While they all share similar styling, they vary in the number, shape and size of the precious stones. All are also available with newly developed ostrich or embossed grained leather straps with black Velcro closures. A luxury watch fair that takes place in Geneva every January, the Salon International de la Haute Horlogerie (SIHH) will return in 2019 with minor tweaks.

While the fair was historically a five-day affair from Monday to Friday, in 2019 it will only run for four days till Thursday, from January 14 to 17, but with extended opening hours from 8:30am to 8:00pm.

And on Sunday, January 13, a day before the exhibition officially opens, select clients will be invited by participating brands for a preview of the new watches.

A sensible decision given the paucity of trade visitors on Fridays, the shortened fair will have its public day on Thursday. On that day the general public can buy tickets to enter the fair, which will stay open till 10pm. Tickets cost SFr70 in 2018, and that’s expected to stay the same next year.

The number of exhibiting brands stays at 35, though with one departure and one addition. Jeweller Van Cleef & Arpels (VC&A) will no longer show its wares, unsurprising given the bulk of its business is jewellery rather than watches, unlike Cartier where over a third of sales comes from timepieces. Taking VC&A’s place is Bovet, the brand best known for wristwatches styled like pocket watches.

And the independent brands at the Carré des Horlogers are: