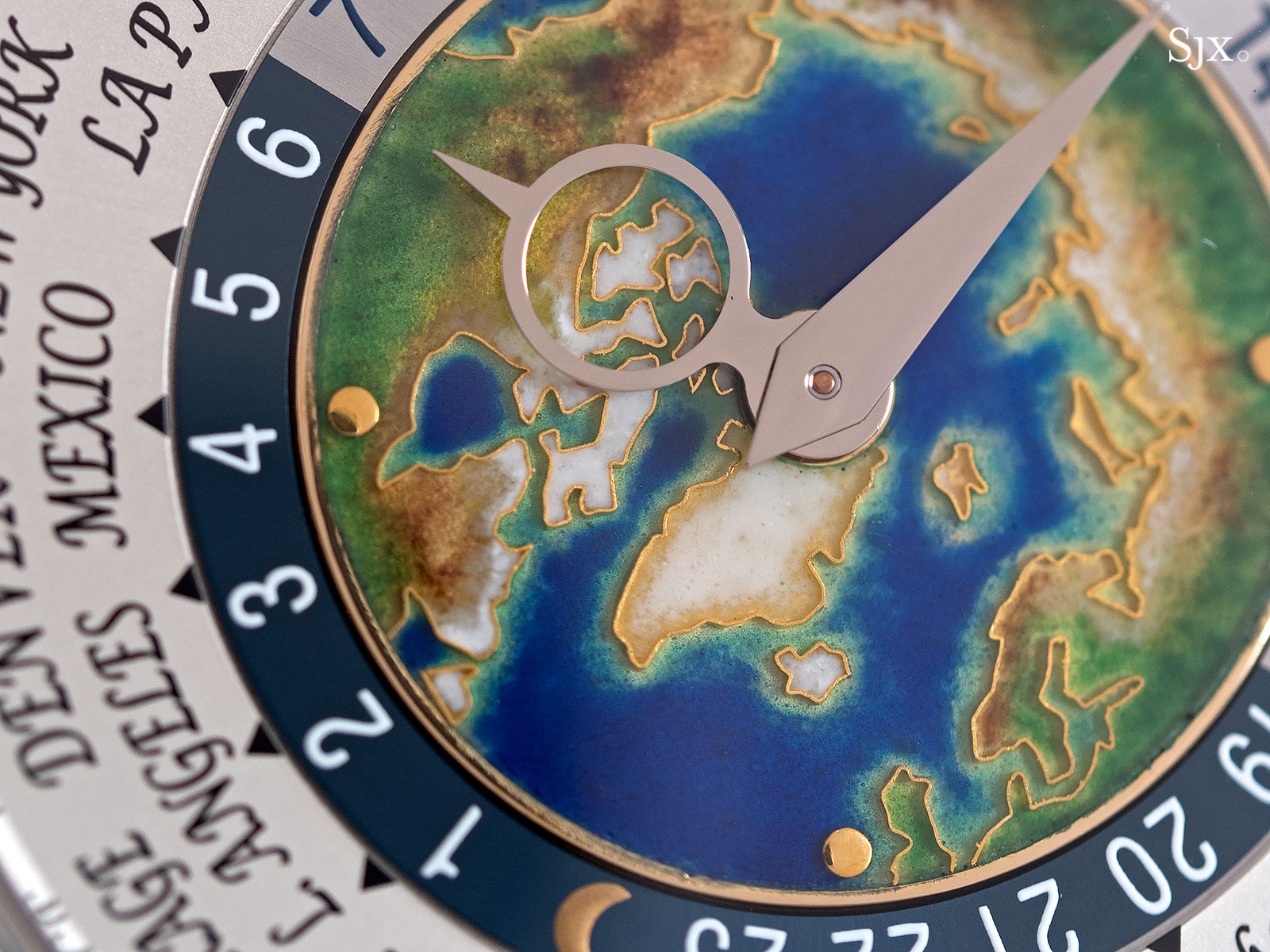 Once available in rose, yellow and white gold, the Patek Philippe World Time watch with cloisonné dial is now only available in platinum, with a platinum bracelet to match. The platinum World Time a lot of watch and probably the most tangibly appealing of the various iterations of the model.

Size-wise it’s identical to the gold models, at 39.5mm wide, but its stock configuration is with a platinum bracelet. In contrast, the gold versions were mostly sold with leather straps, with gold bracelets only available as special orders.

The World Time in platinum is solid and dense in the way only platinum watches are, with the weight enhanced by the “brick” style bracelet (which is generally the standard bracelet for complicated men’s watches, even those made for Eric Clapton).

Surely double the weight of the gold models on a strap, the platinum World Time is reassuringly a lot of watch. In fact, the 5131/1P feels like a uber-luxe travel watch, the sort of timepiece for the passenger for whom first class is a downgrade from Netjets. It’s a good feel. But the case has the same design as the gold models, which means both “Patek Philippe” and “Geneve” are engraved on the bezel. The engravings aren’t obvious, but they feel slightly out of place on a expensive watch. Like all platinum case Patek Philippe watches it has a diamond set into the case band at six, with a cut-out on the end link to accommodate the gemstone.

The cloisonné dial centre depicts a world map as seen from the North Pole, which is essentially the Northern Hemisphere. Executed in browns, green and blue, the map is stylised with intricately shaped gold wire forming the coasts of Canada and Russia. The muted colours of the cloisonné matches the whiteness of the case and bracelet well. The colours of the continents, however, cast a halo into the blue of the sea, perhaps to represent the shallower waters around the coasts. This wasn’t the case for the yellow gold World Time, or the vintage cloisonné World Times, though it was on the white and rose gold models. The rest of the dial is identical to the gold ref. 5131s, with the cities track and 24-hour ring on separate discs, both finished with the same radial brushing but finished in different colours. It’s not the most straightforward or legible style of travel watch, but it is certainly the most romantic. The Louis Cottier-style world time for some reason conveys a bygone age of travel, think steamships and railroads, more than the GMT-style. Like all other Patek Philippe World Times, this is powered by the cal. 240 HU, a micro-rotor automatic with a world time, or heure universelle, module on top.

But perhaps of more interest to potential buyers of the watch is that fact that the platinum World Time might just be the last of the ref. 5131s. The guilloche dial World Times having been replaced by the ref. 5230, and the new Minute Repeater with World Time ref. 5531R sports a different case and dial style. If it is a last hurrah, the ref. 5131 is going out, slowly, in style.