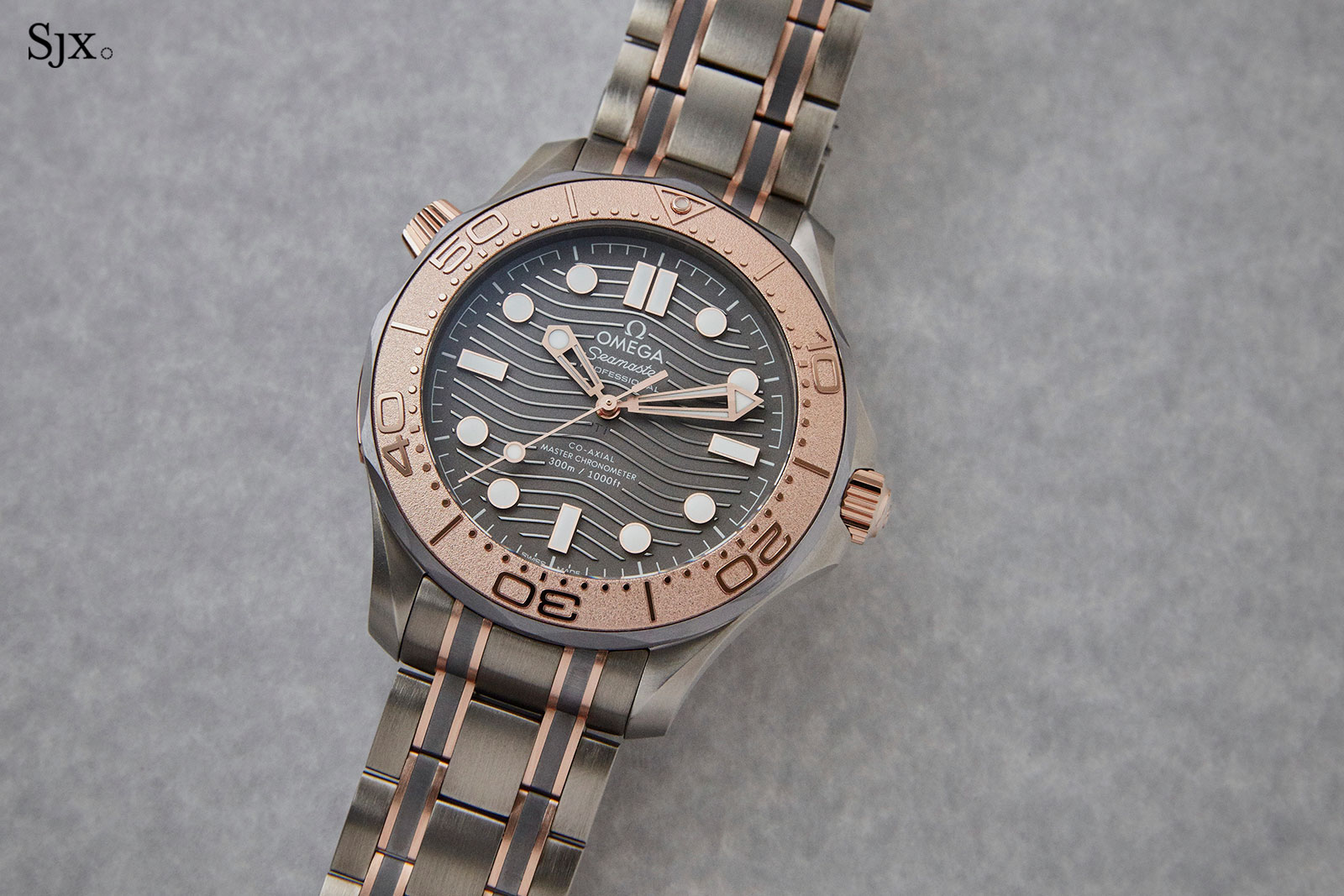 Omega rebooted a classic of the 1990s at Baselworld 2018, reintroducing the Seamaster Diver 300m, preserving the look while upgrading the materials and tech.

The original Seamaster Diver 300m was famous during that decade because Pierce Brosnan wore one in his four outings as James Bond. But Mr Bond’s watch was the steel-and-blue base model, handsome but not notable.

Most interesting was the Seamaster Diver 300m Chronograph in titanium, tantalum and rose gold (ref. 2296.80.00), one of the first, perhaps the second ever, wristwatch to use exotic tantalum (Audemars Piguet got there first in the 1980s). It was unveiled during Jean-Claude Biver’s tenure as chief of Omega, and perhaps the original “fusion” watch.

The new Seamaster Diver 300m limited edition is inspired by that esoteric original that never sold well, being over twice the price of the steel base model.

Today it’s 42mm in diameter and 13.56mm high, good proportions that are large enough for a sports watch but not overly so. Unlike the original that had a dark blue dial, the new Seamaster Diver is more restrained, with the dial being a muted grey. Consequently, the two-tone combination doesn’t jump out quite as much as on a typical mixed metal watch.

The bulk of the watch is titanium, with the bezel and centre twin links of the bracelet in tantalum. The two metals are easier to differentiate: titanium is grey with a hint of yellow while tantalum is darker with a bluish tinge. A hard metal with a high boiling point, tantalum’s more exotic applications include nuclear reactors and missiles. While the raw material is not expensive as gold or platinum is, tantalum is more difficult to machine, explaining why tantalum watches cost several orders of magnitude more.

Even though it’s a simple watch, telling only the time and without even a date (though the ordinary models do have a date display), the Seamaster Diver has a significant quantity of innovation inside. The gold bits of the watch are 18k Sedna gold, Omega’s proprietary alloy that’s fade resistant, unlike ordinary rose gold that tends to lose its rosiness over time due to the chloride in the atmosphere and water.

The hour markers and hands are also 18k Sedna gold, while the dial is titanium and laser engraved with a wave pattern, a nod to the original of the 1990s, which had a stamped wave guilloche.

Unlike the ordinary versions of the Seamaster Diver, the tantalum and titanium edition has the waves in relief, standing raised and in contrast to the dark, frosted surface of the dial. Inside is the cal. 8806 with a 55-hour power reserve that runs at an unusual 25,200 beats per hour (but is now widespread amongst Swatch Group brands that utilises ETA technology). It’s a Master Co-Axial movement, which means it has George Daniels’ lubrication-free co-axial escapement, as well as a METAS certification.

Administered by Switzerland’s meteorological and standards body, METAS tests the functions of a watch thoroughly, including the 15,000 Gauss magnetism resistance of the movement. That industry-leading magnetism resistance is thanks to patented alloys used for the escapement, as well as an Si14 silicon hairspring. Notably, the movement can be seen through the display back, which screws down in perfect alignment with the logo horizontal across the top. The secret is the Naiad Lock case back, which attaches to the case with a bayonet lock, rather than a conventional threaded rim.

The final element unique to the limited edition is an 18k Sedna gold plate screwed to the side of the case that’s engraved with the serial number. But like the original of the 1990s, the new Seamaster Diver with tantalum accents costs more than twice the entry-level model in steel, which is a hefty premium.

007 gets yet another limited edition wristwatch, now inspired by his military rank. 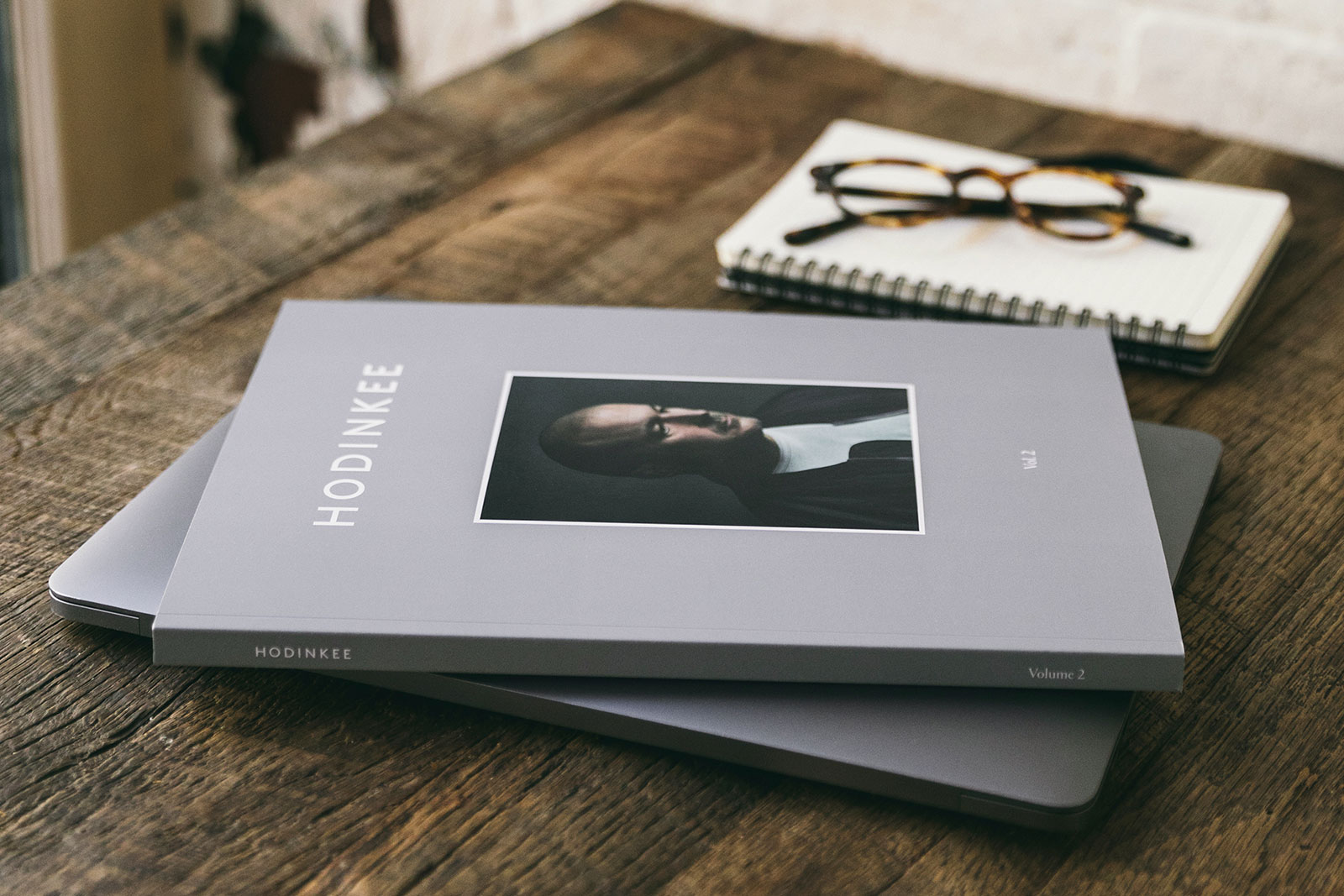 The second instalment of Hodinkee magazine, the paper venture by arguably the world’s most successful watch blog, features a pensive Sir Jonathan Ive on its cover.

Inside is a wide-ranging,  16-page story that includes an interview with Apple’s chief design officer, a visit to the computer maker’s monumental headquarters in Cupertino, and an enlightening look at the development of the Apple Watch. Given that Mr Ive is probably the world’s most important designer from a commercial perspective, the interview is quite a coup. Intriguing tidbits include Mr Ive’s first Speedmaster (bought in Hong Kong in 1992), the fact that the late Steve Jobs never wore a watch, and a refusal to comment on the number of 18k gold Apple Watches were sold (or not).

The story also identifies the seven experts Apple consulted for its watch, including several well known in horology: author Dominique Flechon, and Grégory Gardinetti, once the archivist at the Musée International d’Horlogerie (MIH) in La Chaux-de-Fonds. Like its predecessor, Volume 2 also covers a diversity of topics outside watchmaking, including a history of the 1970s BMW M1 and a huge collection of vintage Leica. But it also delves deep in Hodinkee’s specialty, vintage timepieces, detailing Hodinkee founder Benjamin Clymer’s love for Universal Geneve chronographs.

The magazine is available direct from Hodinkee, at American Express Centurion Lounges as well as select newsstands and hotels.