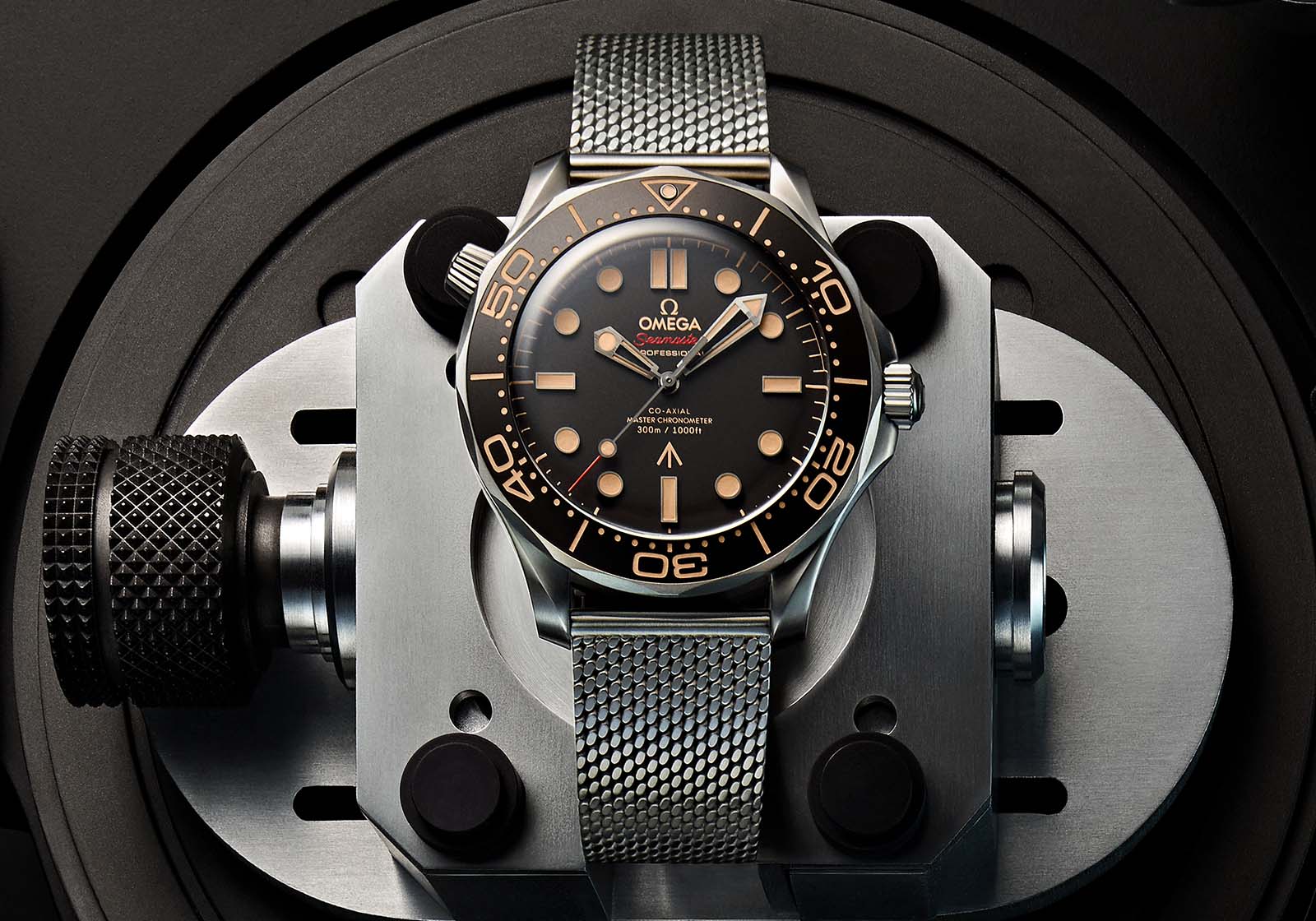 Omega has just revealed the watch that will be strapped to the wrist of 007 in No Time To Die, Daniel Craig’s fifth movie playing James Bond that will open in April 2020. Developed with the actor’s input – he apparently likes vintage watches – the Seamaster Diver 300M 007 draws inspiration from vintage British military-issue watches, while offering modern functionality with a lightweight titanium case and high-spec movement. And unlike the James Bond editions to date – of which there are many – this is part of the regular collection.

“When working with Omega, we decided that a lightweight watch would be key for a military man like 007,” says Mr Craig, quoted in the announcement for the watch, “I also suggested some vintage touches and colour to give the watch a unique edge.” 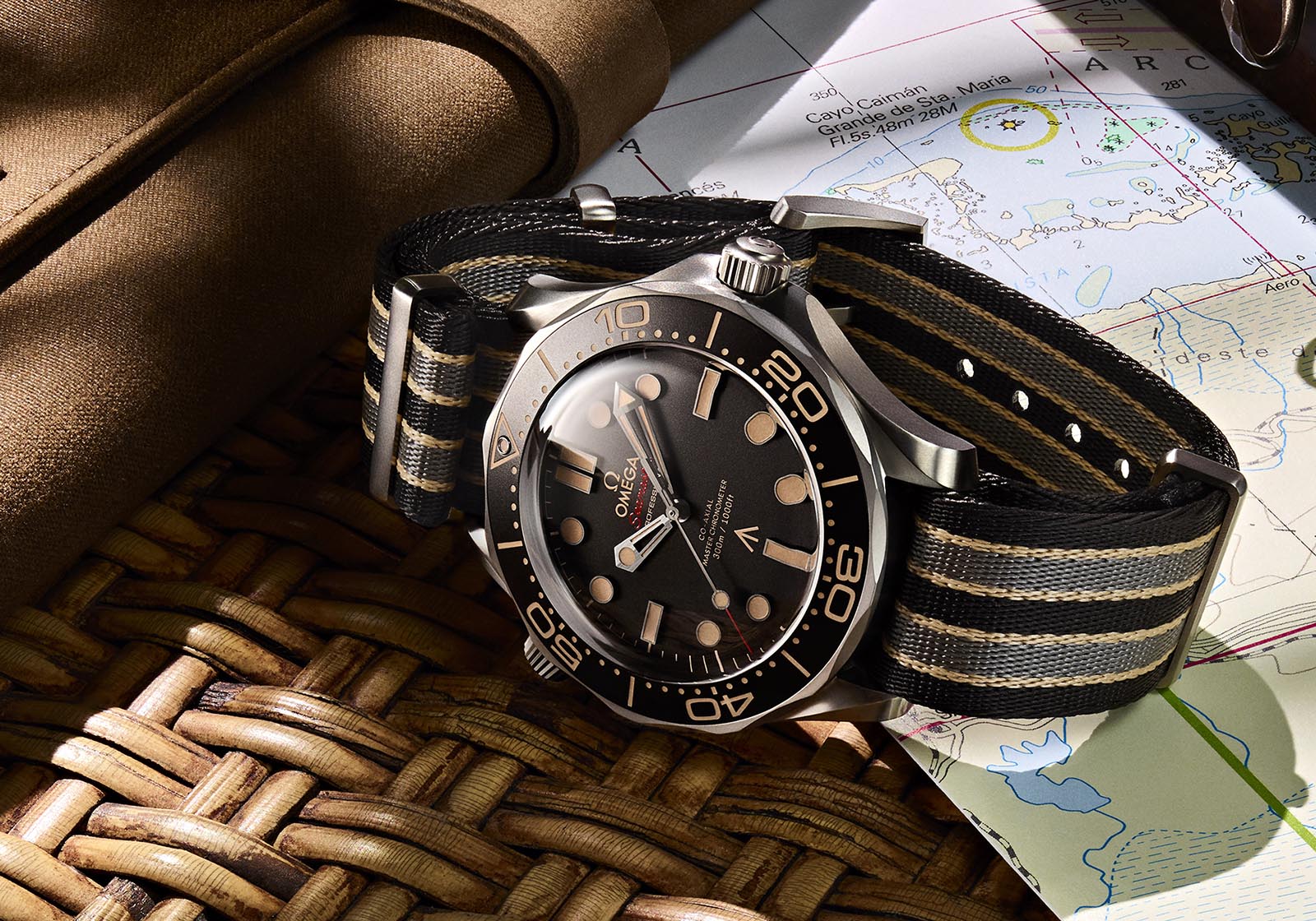 Worn on a mesh bracelet in the film but also available on a NATO strap, the watch is a 42mm Seamaster Diver 300M that’s entirely in titanium, bracelet included. But the styling goes all out – to the extreme – in being faux vintage.

The dial and bezel insert are made of anodised aluminium in a dark brown to replicate the “tropical” look of vintage watches. According to Omega, the aluminium parts will fade over time – albeit over decades rather than years – for a bona fide tropical look. And the hands, numerals and indices are filled with eggshell-coloured Super-Luminova to mimic the appearance of radium “lume” on vintage watches. 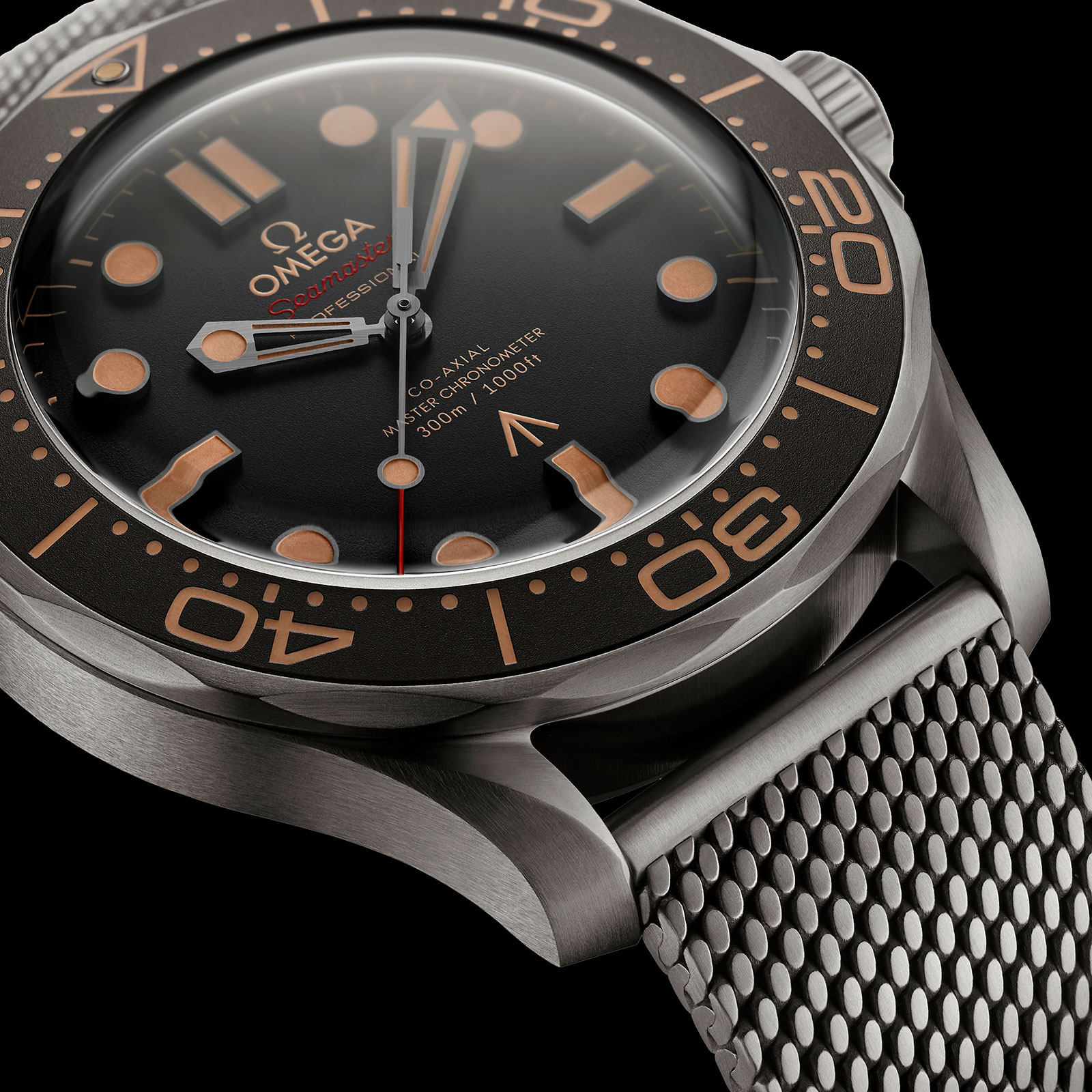 Military issue and proud of it

And somewhat ironically for a watch designed for a covert agent, it is generously marked as armed forces property.

At six o’clock on the dial is a broad arrow, historically used to indicate property of the British government, and in recent times equipment belonging to the Ministry of Defence. 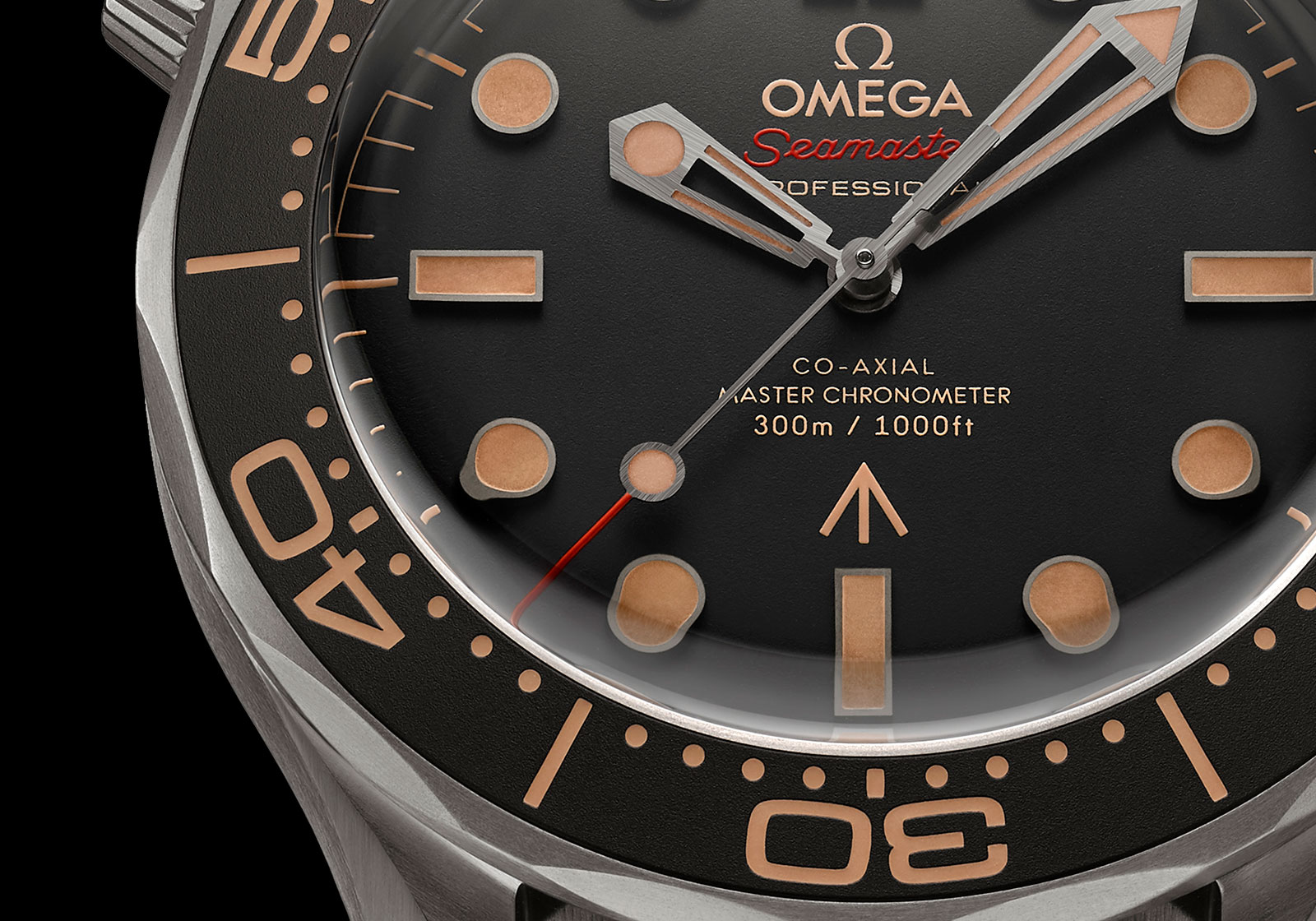 And the broad arrow is also found on the case back, along with a set of numbers like those found on the backs of vintage British military-issue watches, including the Omega Seamaster 300 of the 1960s.

Most of the markings are actually identical to those found on the vintage originals. “0552” indicates the British navy – James Bond is a commander in the Royal Navy – while “923-7697” refers to a diver’s watch, and “A” means the watch has a screw-down crown.

The rest has been tweaked for its current purpose: “007” is obvious, and “62” refers to the year that the first James Bond film, Dr No, was released. On a vintage military-issue watch, the serial number of the watch would take the place of “007”, while the year of issue would replace “62”. 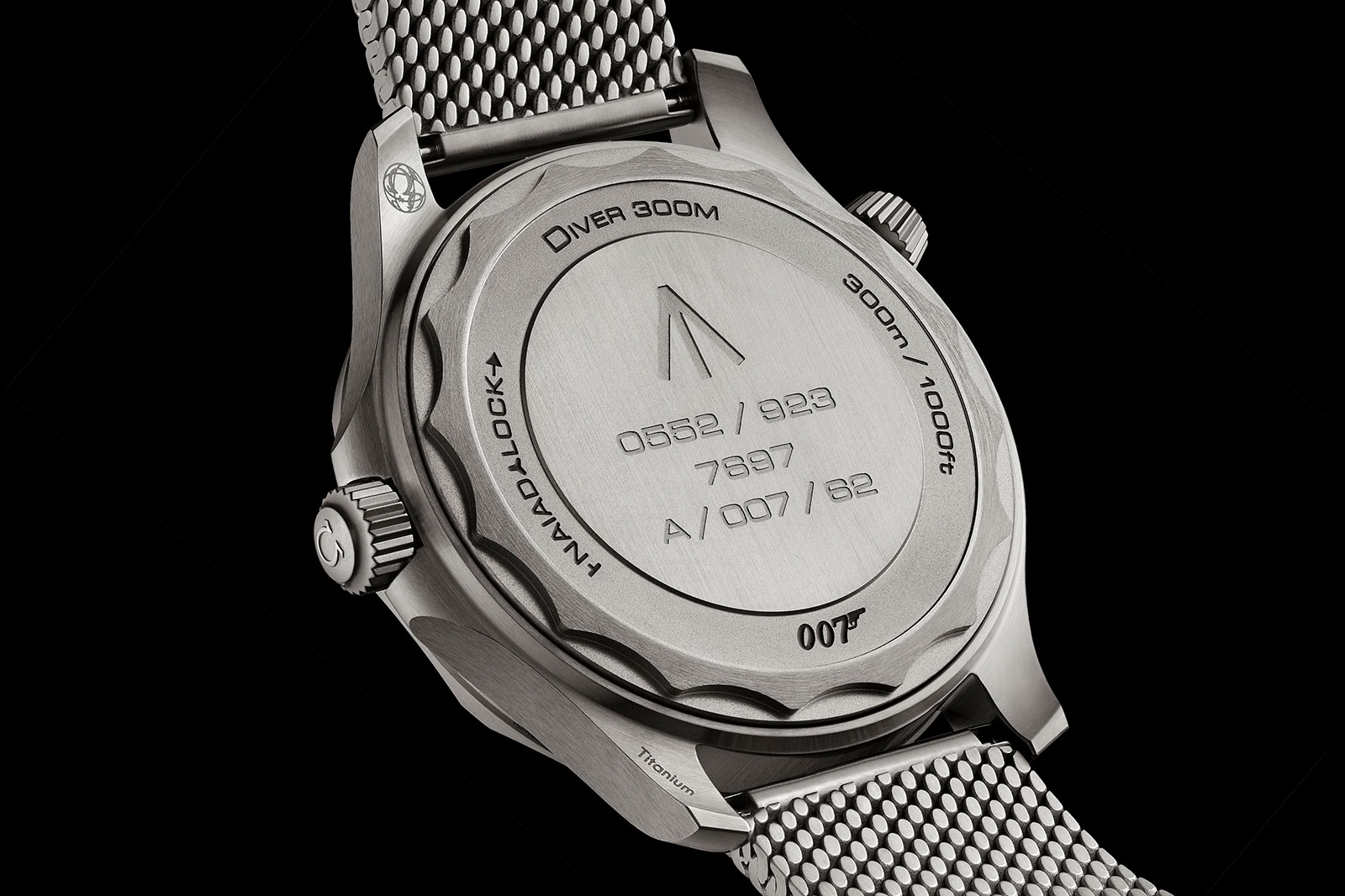 Because the case back has a bayonet-lock seal, which Omega refers to as Naiad Lock, it screws down in a fixed, vertical position, ensuring the text will always be the right way up.

Under the back is the automatic Co-Axial Master Chronometer 8806 with a rhodium-plated rotor. It is equipped with a free-sprung balance wheel and a silicon hairspring. Crucially, various parts of the co-axial escapement are made from proprietary alloys that boost magnetism resistance to over 15,000 Gauss. 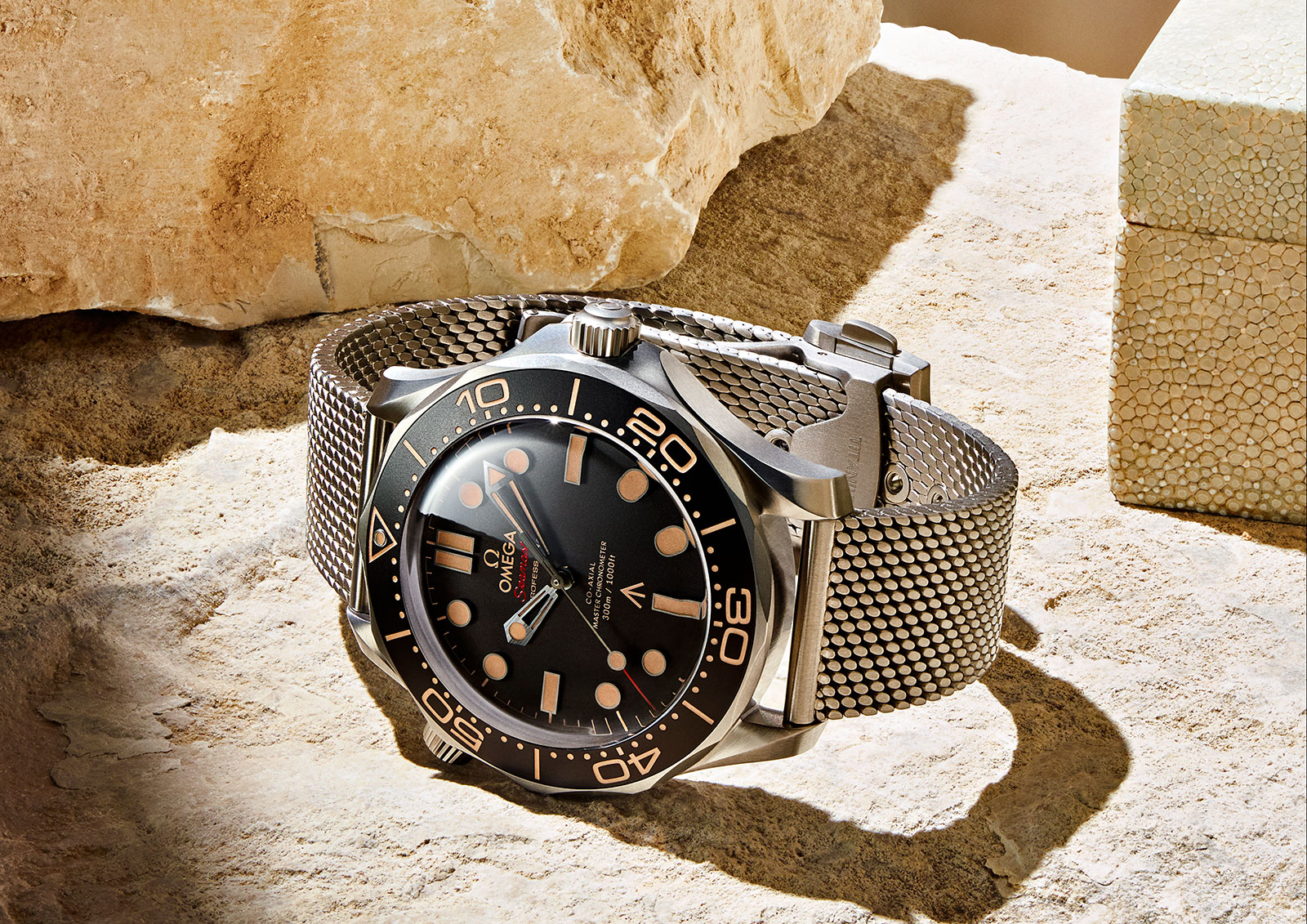 The mesh bracelet is fitted to a folding clasp that can be adjusted via the holes in the bracelet, as on a leather strap

Limited edition: No
Availability: At boutiques and retailers from February 2020
Price: US$9,200 on mesh bracelet, or $8,100 on a NATO strap

A pair in steel and in gold.