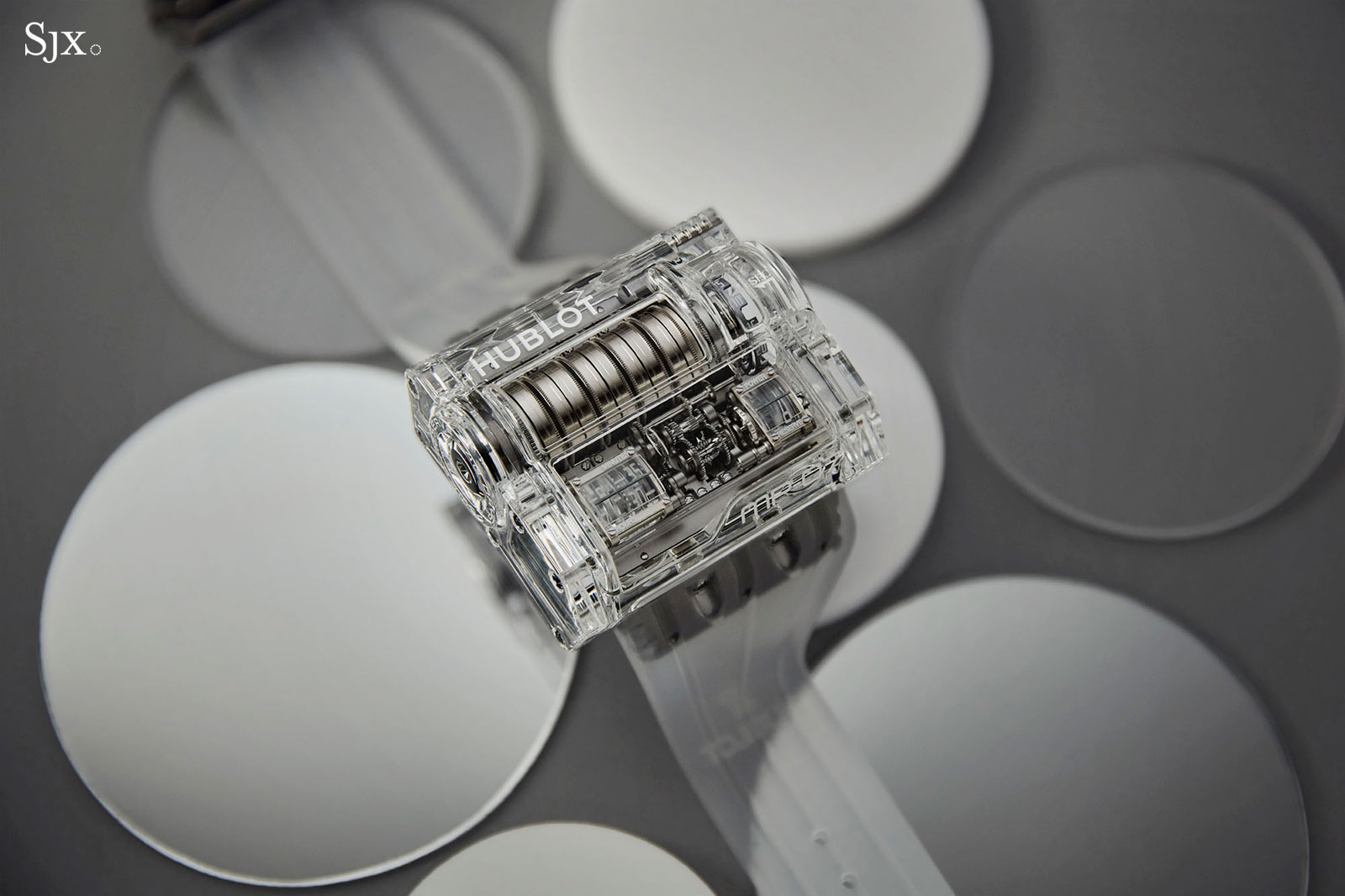 Hublot is best known for its brash and brightly coloured watches that are often boosted by celebrity tie-ups, but the watchmaker also maintains a strong technical development team. It’s led by Matthias Buttet, who once led the defunct complications specialist BNB Concept. Now his talents are dedicated to Hublot’s cause (and to a lesser extent its sister brands TAG Heuer and Zenith), which means some exceptionally exotic mechanical creations, like the MP-07 40 Days Power Reserve.

The MP-07 is a variant of the MP-05 LaFerrari – which has a 50-day power reserve and 11 barrels – and takes a similar approach to movement construction. Nine stacked barrels that unwind in series give the watch a 40 day power reserve, or 960 hours. Unlike most long power reserve movements that utilise a single large mainspring and a constant force mechanism (like a remontoir), the MP-07 takes what is almost a brute force approach, explaining why the time-only movement has some 487 parts. Barrels seen from the front… and from the back.

Not only does it have more barrels than an ordinary wristwatch, each of its nine barrels is larger than a conventional barrel. In fact, each barrel in the MP-07 delivers almost twice as much as energy as a mainspring in a regular watch. Unsurprisingly, the watch can’t be wound in the conventional manner, since that would take eons. Instead it requires a handheld, electric drill-like device that plugs into a socket on the side of the case, winding the barrels directly. On the back: the socket for setting the time

The nine barrels means the movement has to manage a large amount of energy, but not an outrageous quantity, since each barrel unwinds one after the other. That accomplished with a complex and convoluted gear train, visually the most impressive aspect of the watch. Most of the real estate inside the case is occupied by the barrels, leaving the display relatively small. The mechanically logical decision to integrate the time display into the gear train means the hours and minute are indicated on rotating drums on the bottom left corner of the watch. The power reserve display sits on the opposite corner. Legibility is not a particular strength of the MP-07. The MP-07 also includes Mr Buttet’s signature vertical tourbillon, mounted on the same axis as the nine barrels. It’s visible, and slightly magnified, inside a porthole on the right flank of the watch. With everything else that is going on with the MP-07, the flying tourbillon seems also superfluous. While the MP-05 LaFerrari was modelled on a Ferrari engine block (and shaped like a snake’s head), the MP-07 is massive and oblong, looking almost like a prop from a 1970s sci-fi flick. The case is 51mm wide and at 24mm high, almost half as much in height.

The original MP-07 was delivered in a black-coated titanium case, which accentuated its size and chunkiness. Hublot subsequently unveiled a version in a clear sapphire crystal case, albeit with black-coated movement components. This version pictured here is a “Special Edition”, actually a limited edition of just two watches, that is sleekly monochromatic in silver, white and clear sapphire. The case is polished, clear sapphire, made up of four primary pieces bolted together with Hublot’s “H” head screws. Of all the MP-07 variations it has the greatest visual lightness, though it remains the same size, making it large and hard to miss on the wrist. While the MP-07 is at the extreme opposite end of the spectrum from traditional high horology – pedants will point out the tourbillon has a flat, rather than overcoil, hairspring – it really is mechanically impressive. More significantly, the MP-07 (and its cousins like the MP-05) has significantly more substantive horological content than many of its peers in its particular niche of watchmaking.

The MP-07 Sapphire 40 Days Power Reserve Special Edition is a limited edition of just two watches, priced at just under US$500,000. In Singapore it retails for S$677,300 including 7% tax.

Correction April 10, 2018: The socket for winding the barrels is on the side of the case, and not the back as previously stated.