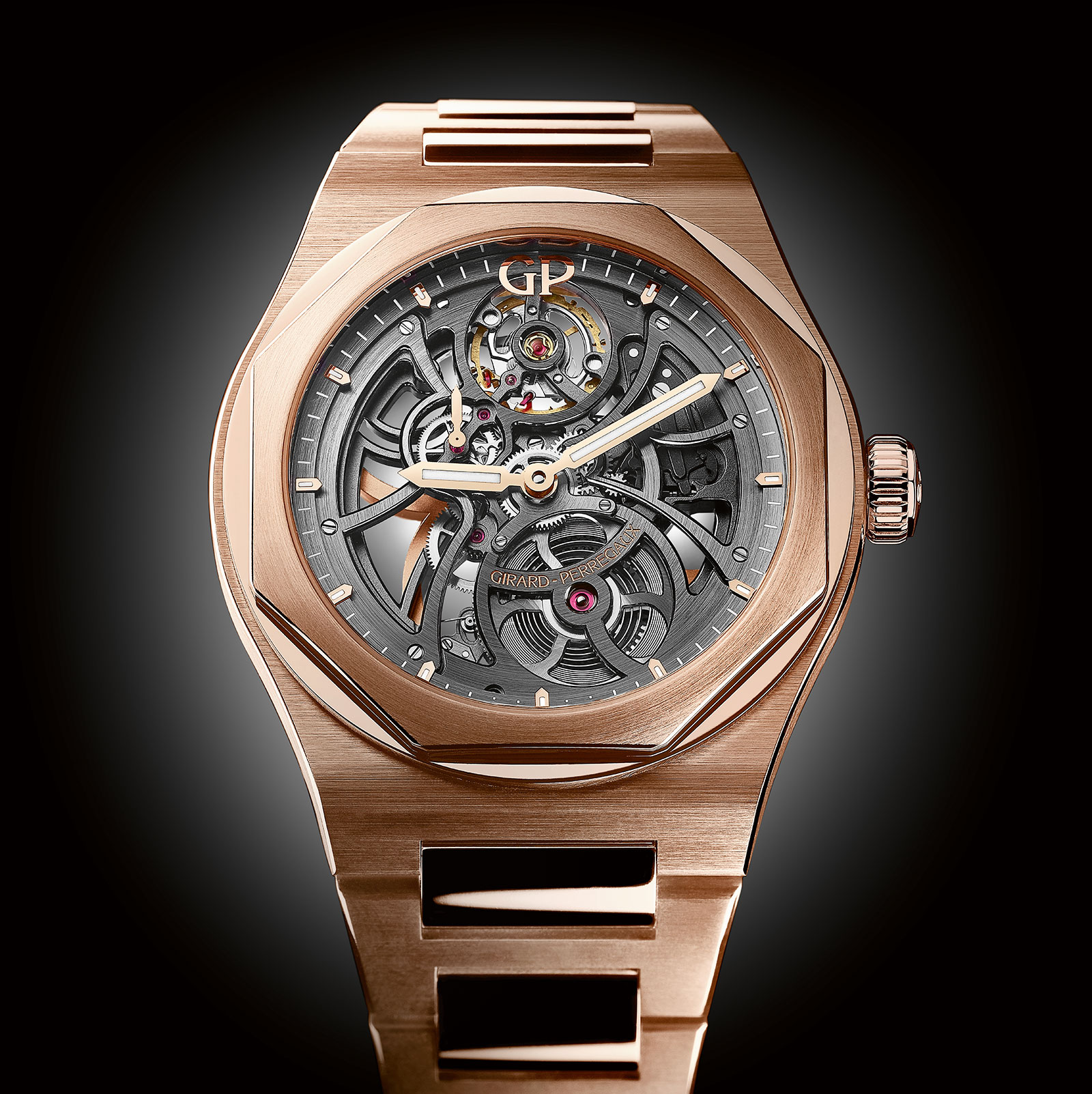 Girard-Perregaux revived the Laureato at SIHH 2017, bringing back a design conceived in the 1970s.

Joining the line-up unveiled earlier in the year is the Laureato Skeleton that’s equipped with the same calibre GP01800-0006 found in last year’s 1966 Skeleton. Self-winding and thin at 5.4mm high, the movement has its bridges and base plate skeletonised in geometric shapes, then finished with a dark grey plating. It’s a modern look well suited to the Laureato case. The case is available in steel or pink gold, both 42mm in diameter and 10.88mm high. The steel model is rated to 100m, while the pink gold version is water-resistant to 50m. In line with expectations, Richemont’s results for the year to March 31, 2017, are down on the previous year, sending its shares down 5% at the end of trading.

Sales at the owner of brands like Cartier, IWC and Panerai fell 4%, largely due to weakness in its watch division as well as buy-backs of watch inventory from retailers, which cut sales by €278m.

Much of the sales decline was due to continuing weakness in its wholesale channels (third-party retailers and distributors mainly of watches), with wholesale revenue falling 14%.

Sales at Richemont’s own boutiques, on the other hand, grew 4%, though the group still closed 38 boutiques during the year.

Geographically, the United States and China did well, while Europe and Hong Kong fare poorly in comparison.

In terms of divisions, jewellery continued to do well, while the watch business (which mainly relies on wholesale) saw sales fall 11%. Operating profit in the division fell 57%.

Diversity at the top

Continuing the management overhaul that controlling shareholder Johann Rupert started in January, which included promoting a women to run Piaget, almost half of the Richemont board is retiring.

While Richemont’s board is currently overwhelmingly white and male (and includes a Lord and a Duke), the proposed directors are a more varied group with skills that indicate where Richemont is going.

More unusually the incoming group includes a pair of technology executives. One is Briton Clay Brendish, founder of software services outfit Admiral plc, which was sold in 2000 for over £1 billion.

The other is Indian-born Nikesh Arora, the former Google executive who is best known for a brief, one-year stint as the number two man at Japanese tech giant Softbank, which nonetheless netted him about US$200m in compensation.

Also up for election to the board are two women, which will triple the female representation on the board. The first is Dr Keyu Jin, a Harvard educated Chinese economist who’s now on the faculty at the London School of Economics and Political Science (LSE). Amongst her specialities is the Chinese economy. Notably, the 33-year old is the only child of Jin Liqun, currently President of the Asian Infrastructure Investment Bank (AIIB) and a former Vice Minister of Finance in China.

Alongside Dr Jin is Dr Vesna Nevistic, formerly a senior banker at Goldman Sachs and UBS, and now an independent consultant on corporate restructuring and strategy. At UBS Dr Nevistic was part of the team that helped put the bank back on track after the financial crisis.

The full announcement can be seen here.