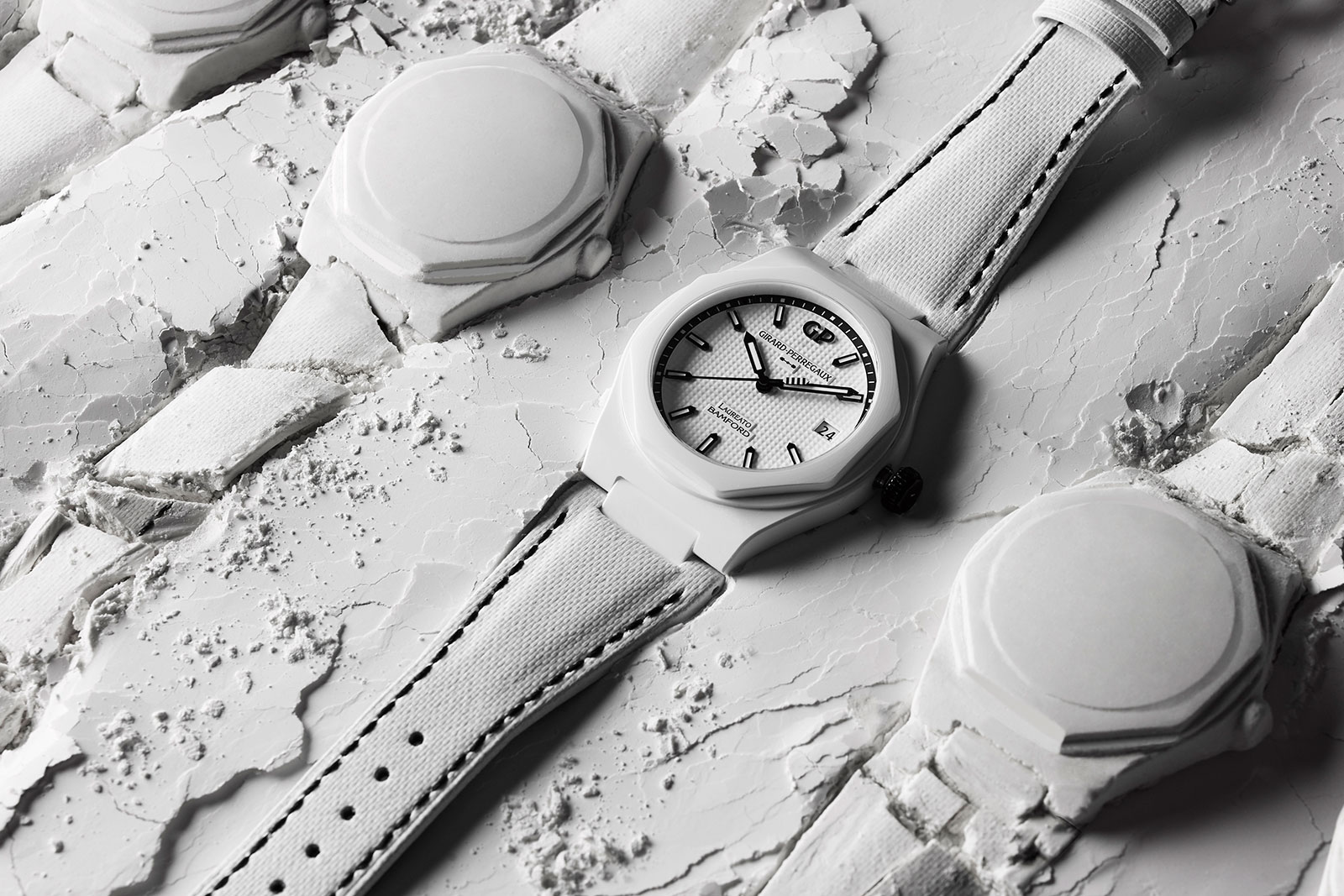 One of the earliest entrants in the luxury-sports watches segment, the Girard-Perragaux Laureato made its debut in 1975. But the model did not remain in production consistently, and only recently enjoyed a revival with a relaunch in 2017.

With its relaunch, the Laureato line up now includes complications like the tourbillon, exotic case materials like sapphire, and onyx stone dials. The latest is perhaps the most striking version to date: the Laureato Ghost that was designed in collaboration with Bamford Watch Department (BWD) and rendered entirely in white ceramic. 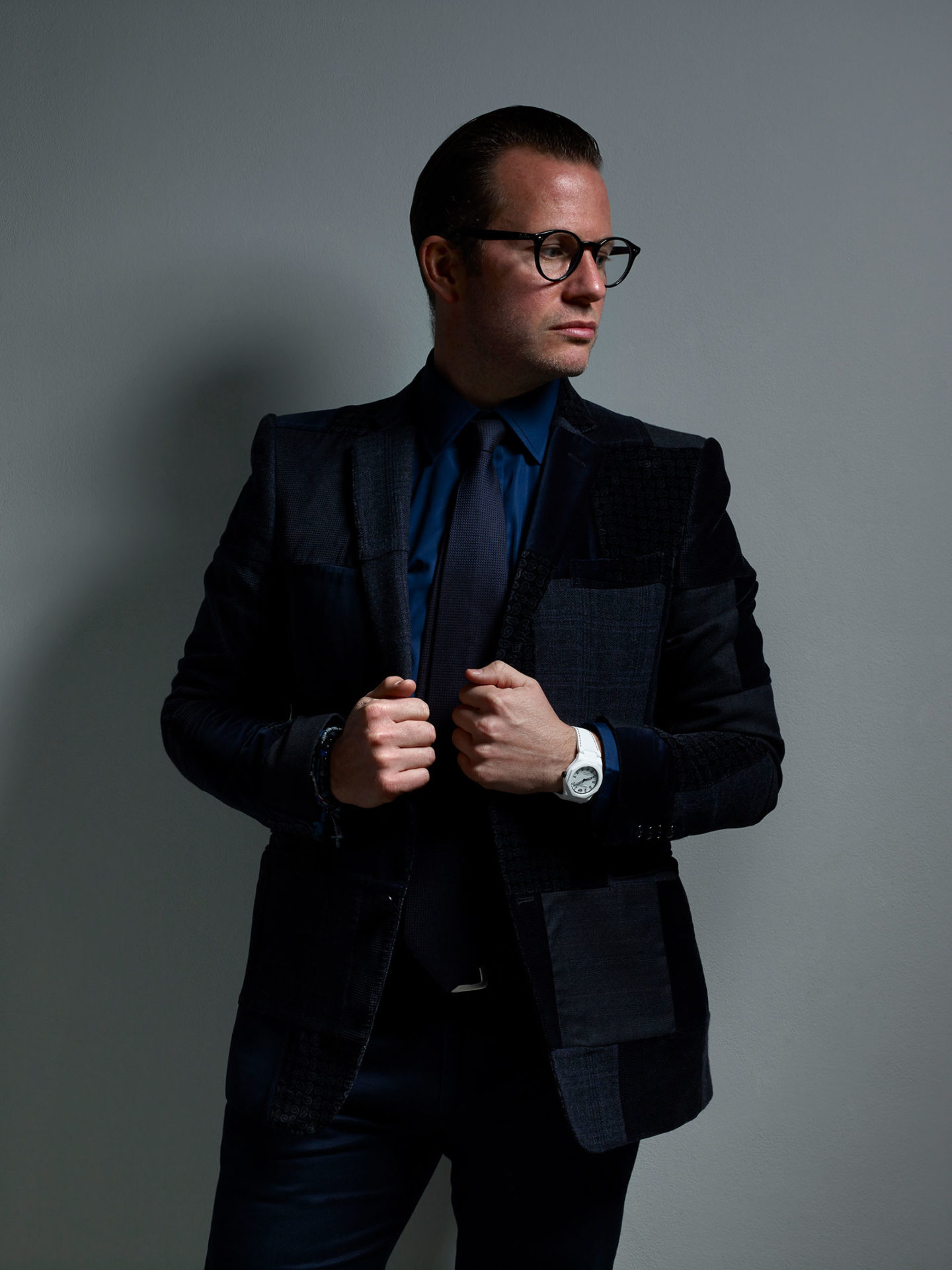 George Bamford with the Laureato Ghost

Founded by George Bamford, the fashion and watch entrepreneur who’s the son of construction-equipment tycoon Sir Anthony Bamford, BWD started out as an after-market customiser of Rolex watches and swiftly became one of the preeminent brands in that niche.

But BWD has since evolved into an officially-endorsed customiser (albeit not by Rolex), having received the stamp of approval from various watchmakers, most notably from the brands owned by LVMH, namely TAG Heuer and Zenith. The Laureato Ghost is the first collaboration between BWD and Girard-Perregaux (GP), having been rolled out for the 45th anniversary of the Laureato, explaining the small, 45-piece run.

Named Ghost because of its singular colour palette, the watch is attractive in its simplicity. BWD’s house style is often characterised by an all-black finish, making the all-white Laureato Ghost unusual. But the Ghost still retains the clean, high-contrast look that is found in most BWD designs – and instantly evokes the Stormtroopers of Star Wars.

The result of the collaboration is a good-looking watch with a strong aesthetic that brings to mind a photographic negative. And though white ceramic is not new in watchmaking, the material is still fairly uncommon in high-end sports watches, especially those with integrated bracelets. 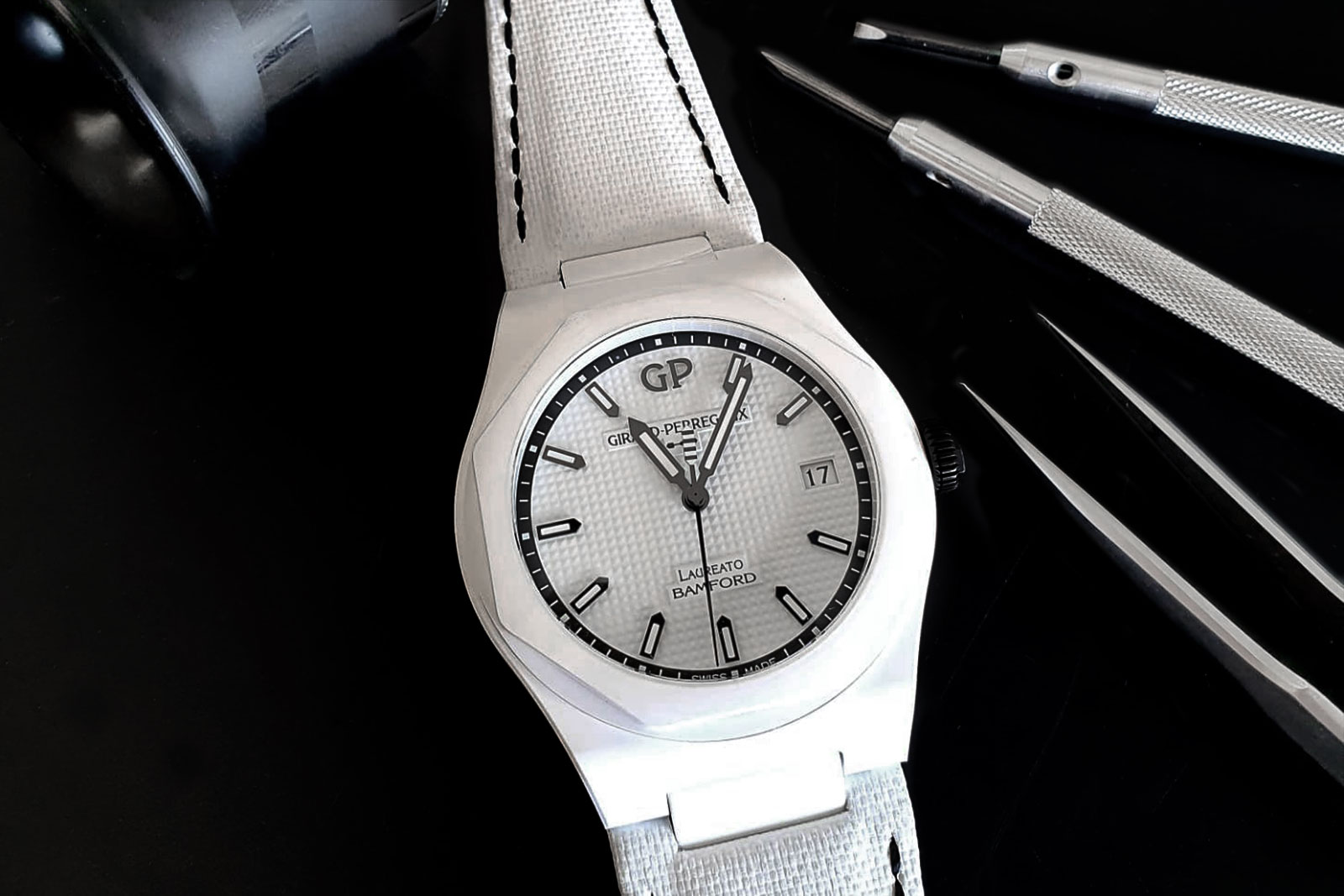 While the white ceramic case is a first for BWD, it isn’t new for GP, which unveiled an all-white ceramic Laureato in 2018, albeit as a ladies’ watch.

Notably, the Ghost is a mid-size Laureato with a 38 mm case, which would make it more wearable and subtle, or at least as subtle as an all-white watch can be. Light colours typically make a watch appear larger, and the largest 42 mm size probably looks over the top entirely in white.

And the Laureato Ghost is priced at US$16,100 on a bracelet, and US$2,200 less on a strap – although the bracelet version is unquestionably the one to get. That’s substantially less than what a Nautilus or Royal Oak costs, but in the same ballpark as watches like the Chopard Alpine Eagle, which is sensible positioning. Given the materials, in-house movement, the ask is reasonable as such things go. 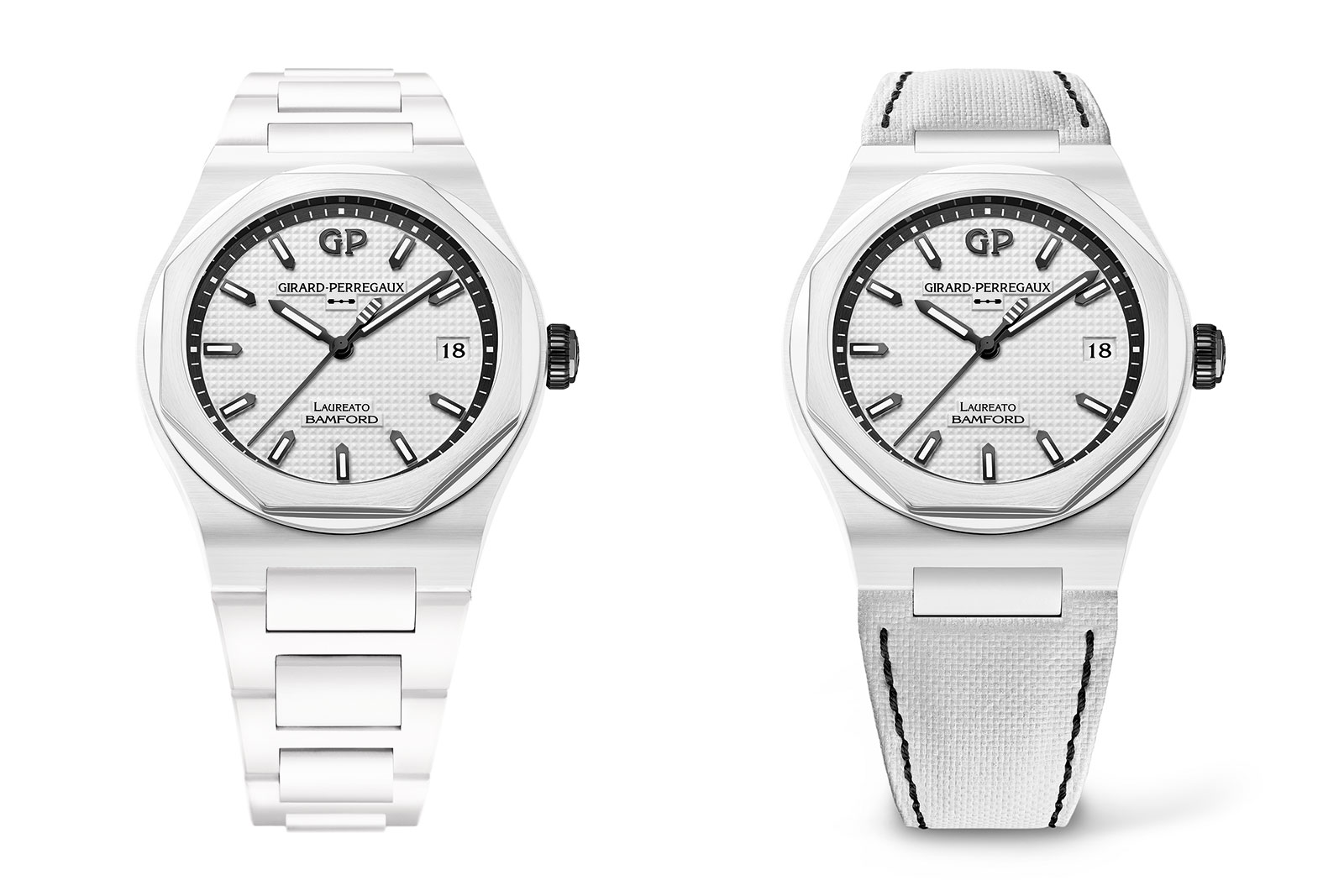 The dial retains the usual layout and finish of the Laureato – a Clous de Paris, or hobnail, patterned surface, but with “Bamford” replacing the usual “Automatic” label above six o’clock, which actually looks better.

It’s done in a starkly contrasting black and white – the hands, indices, and minute track are a flat black, giving it excellent legibility. And the counterweight of the seconds hand is finished with quirky zebra stripes, perhaps the only whimsical detail of the watch. 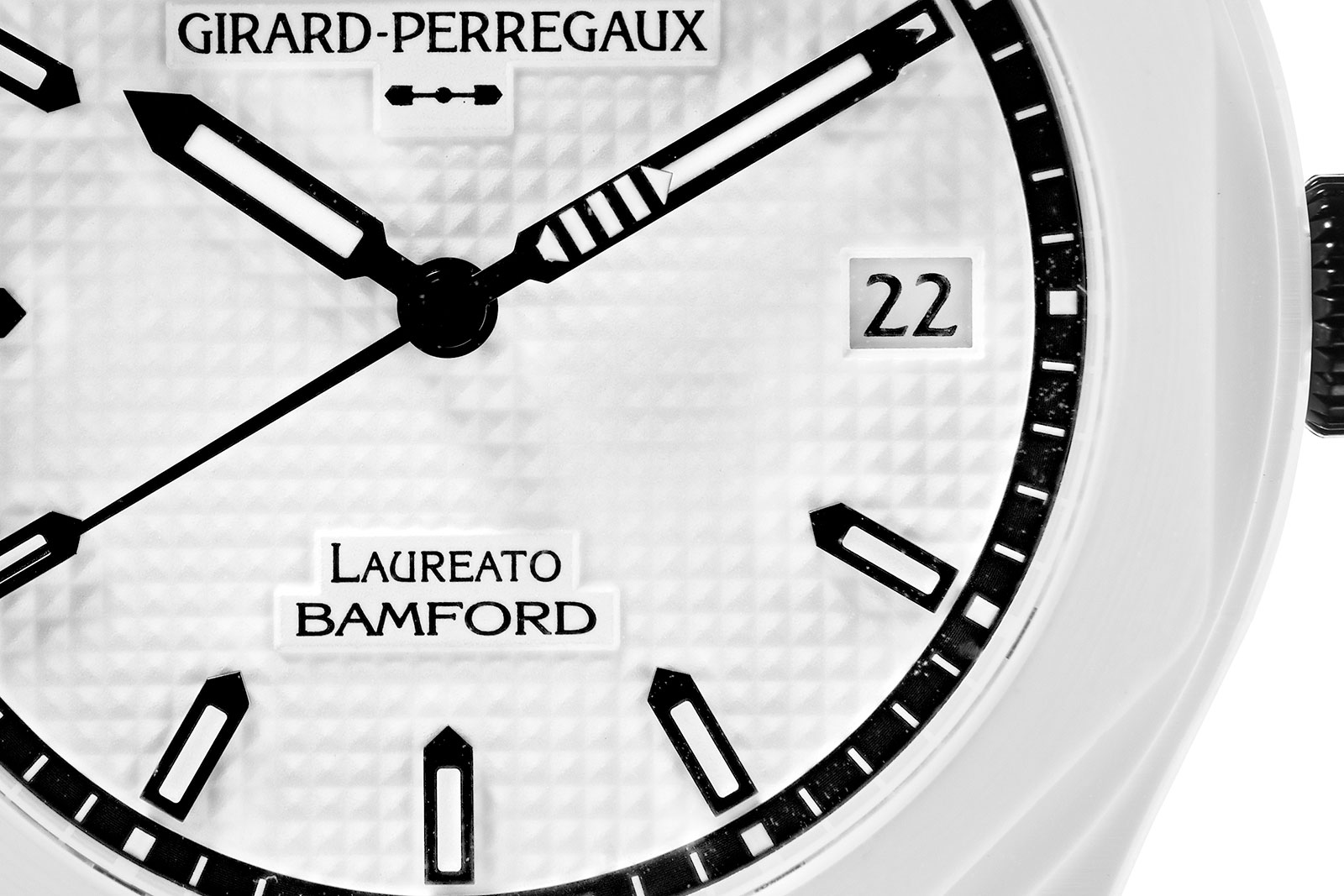 Limited edition: 45 pieces
Availability: From Bamford Watch Department in November, at Girard-Perregaux retailers worldwide after
Price: US$13,900 on strap; US$16,100 on bracelet