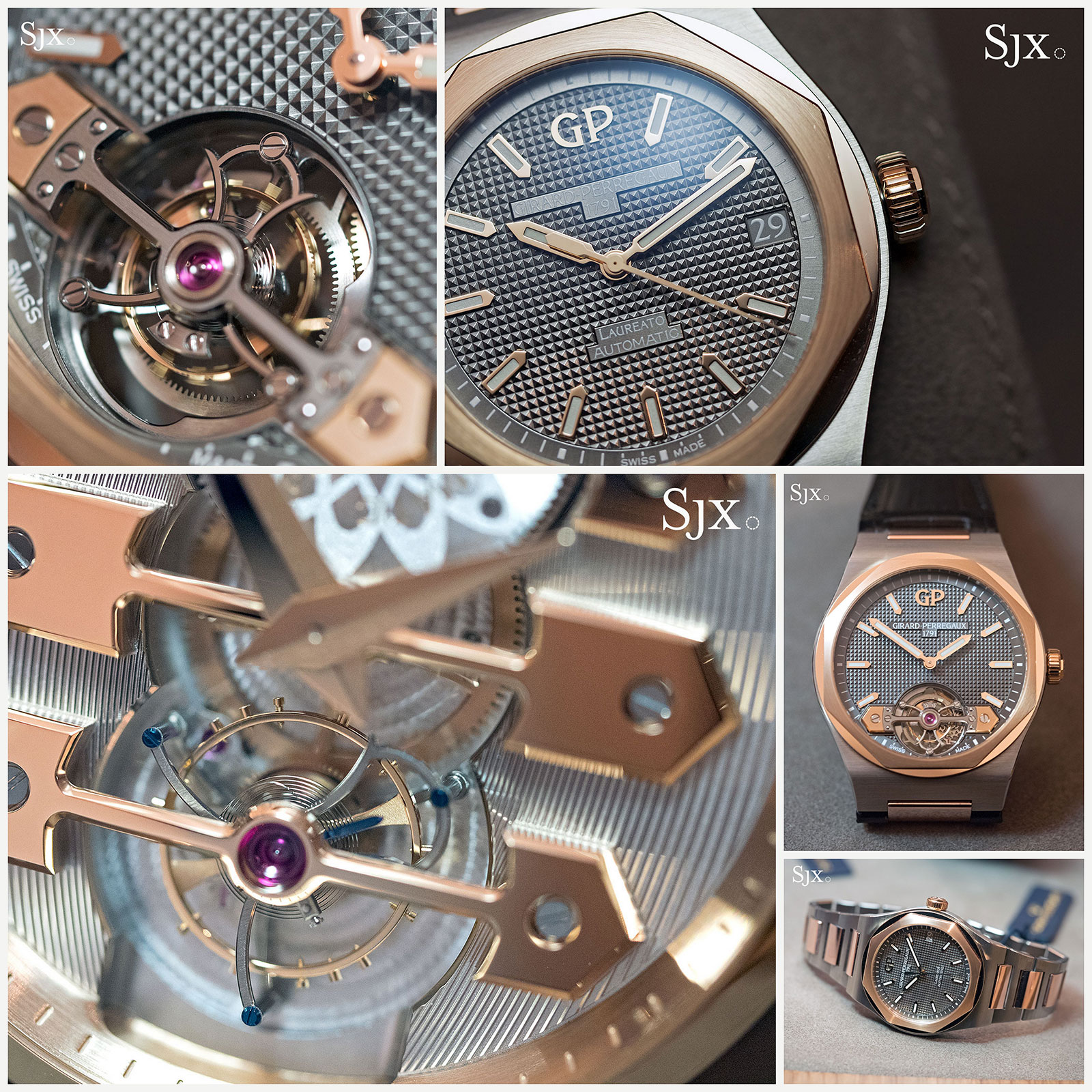 Better known for its impossibly beautiful Tourbillon with Three Gold Bridges, Girard-Perregaux‘s primary launch for SIHH 2017 is the revived Laureato, the luxury sports watch that has been in brand’s line-up on and off for the last 40 years.

Introduced in 1975 as a competitor to the giants in segment, namely the Audemars Piguet Royal Oak and Patek Philippe Nautilus, the Laureato was designed by a Milanese architect. As tends to be the case with luxury sports watches of that vintage, the key feature was its bezel, essentially a circle with an octagon inside. The 2017 Laureato is a remake of the 1990s model (the versions from the 1970s and 1980s being dated-looking for modern tastes), with the same key design elements, including a hobnail pattern dial and baton hands. But it’s larger and more masculine thanks to design tweaks like a wider bezel. The Laureato 42mm is available in steel or a combination of titanium and pink gold. It’s powered by the calibre GP01800, a thin, in-house automatic movement that’s visible through the open back. Available in steel or pink gold, the mid-size Laureato 38mm is a curious beast, being too small for men and too chunky for a ladies’ watch. It is, however, available with a diamond bezel. The smallest 34mm version, which is quartz, is also available with a diamond bezel. Fetching as it is – the 42mm titanium and pink gold version is unusual and appealing – the Laureato is up against stiff competition, putting it in the same situation as the Vacheron Constantin Overseas.

Even if the product is very, very good, the competition is well entrenched, though the Laureato has the advantage of being more affordable, making it relatively good value for money. The Laureato 42mm in steel for instance, costs about half the equivalent from Patek Philippe or Audemars Piguet.

While the new Laureato collection has no chronograph inside yet, it does include a tourbillon. The Laureato Tourbillon is a very large 45mm in diameter, though relatively slim at just under 12mm high. Its size means the tourbillon lacks some of the elegance of the time-only models. Available only in titanium with pink or white gold accents, the Laureato Tourbillon is equipped with the calibre GP09510. It’s a self-winding movement with a micro-rotor visible on the front, with the highlight being the solid gold tourbillon bridge on the front. Shaped like an arrow that’s a GP trademark, the bridge holds in place a one-minute tourbillon that’s also shaped in the traditional GP style. The bridge is in a contrasting colour of gold relative to the case accents, so the titanium and pink gold version has a white gold bridge (pictured here). A twist on the classic Girard-Perregaux tourbillon bridge is the Neo-Bridges. It’s a time-only wristwatch with an open dial that reveals the twin barrels at the top, with the balance wheel exposed at six o’clock. The calibre GP08400-0001 inside is automatic, and similar to the movement inside the similarly spec’ed Place Giradet wristwatch.

The look is modern and appealing, though it is hardly reminiscent of any other GP wristwatch. The case is titanium, 45mm in diameter, with a box-shaped crystal that sits directly on the case, sans bezel, allowing for a better view of the movement. SIHH 2017 Personal Perspectives: Baume & Mercier - The Most Affordable Watches of the Fair