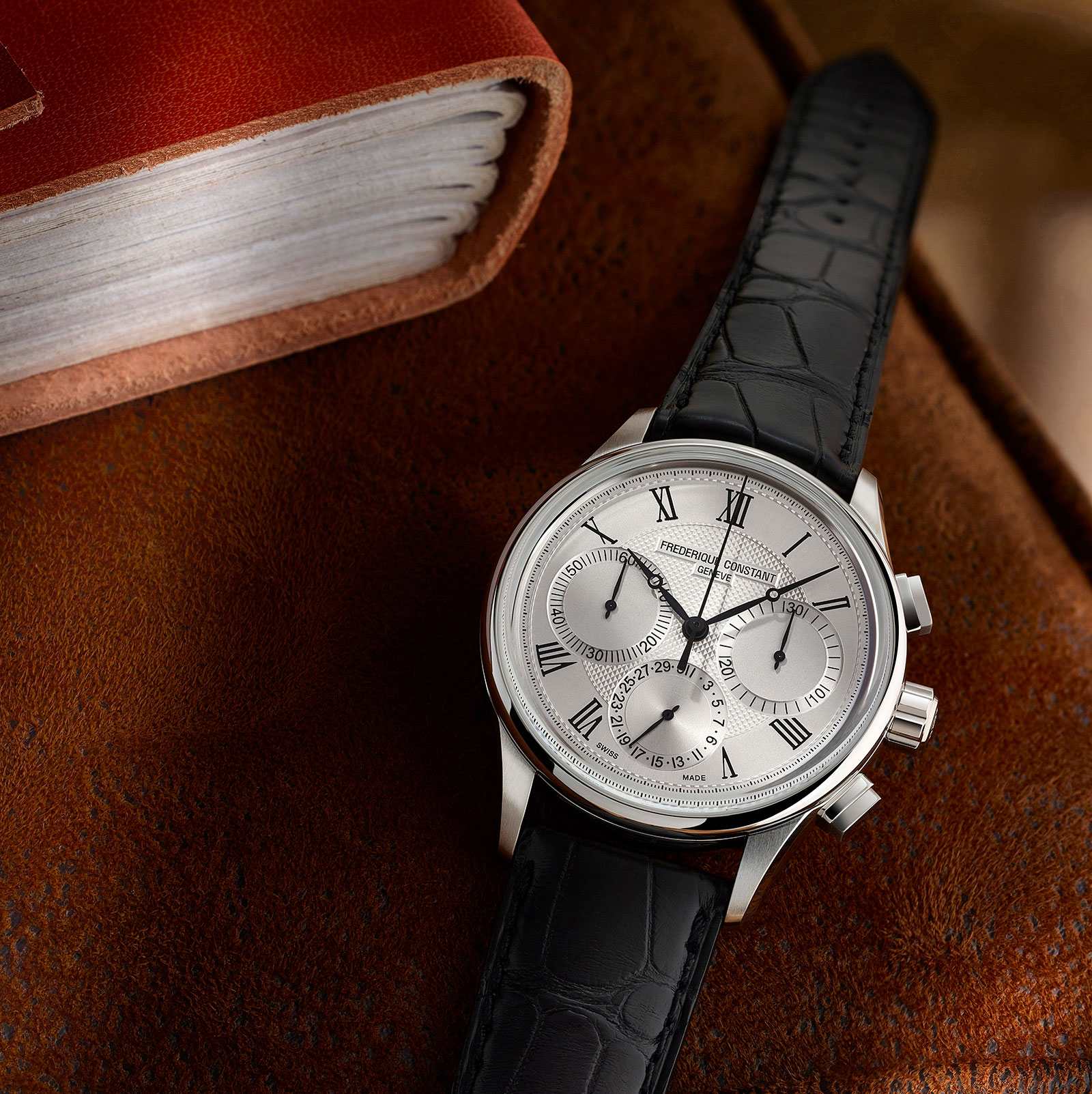 The Flyback Chronograph Manufacture starts at €3695, or about US$3990. For that you get a sedately styled chronograph with a 42mm case in steel or gold-plated steel. It’s a 30-minute chronograph, with a sub-dial at six o’clock for the date. Inside is the FC-760 movement, which is in-house, automatic, and has a flyback feature. The construction and components had to be streamlined to make it this affordable.

The construction is modular, with the chronograph mechanism added to a in-house Frederique Constant calibre that has a shortish 38-hour power reserve. Made up of just 96 parts, the chronograph module has a column wheel, or more specifically a star wheel, to control the stopwatch. While a traditional column, or castle, wheel has to be milled, the star wheel is more simply stamped.

Other condensed elements of the chronograph mechanism include a coupling that operates vertically, as well as a one-piece reset hammer. 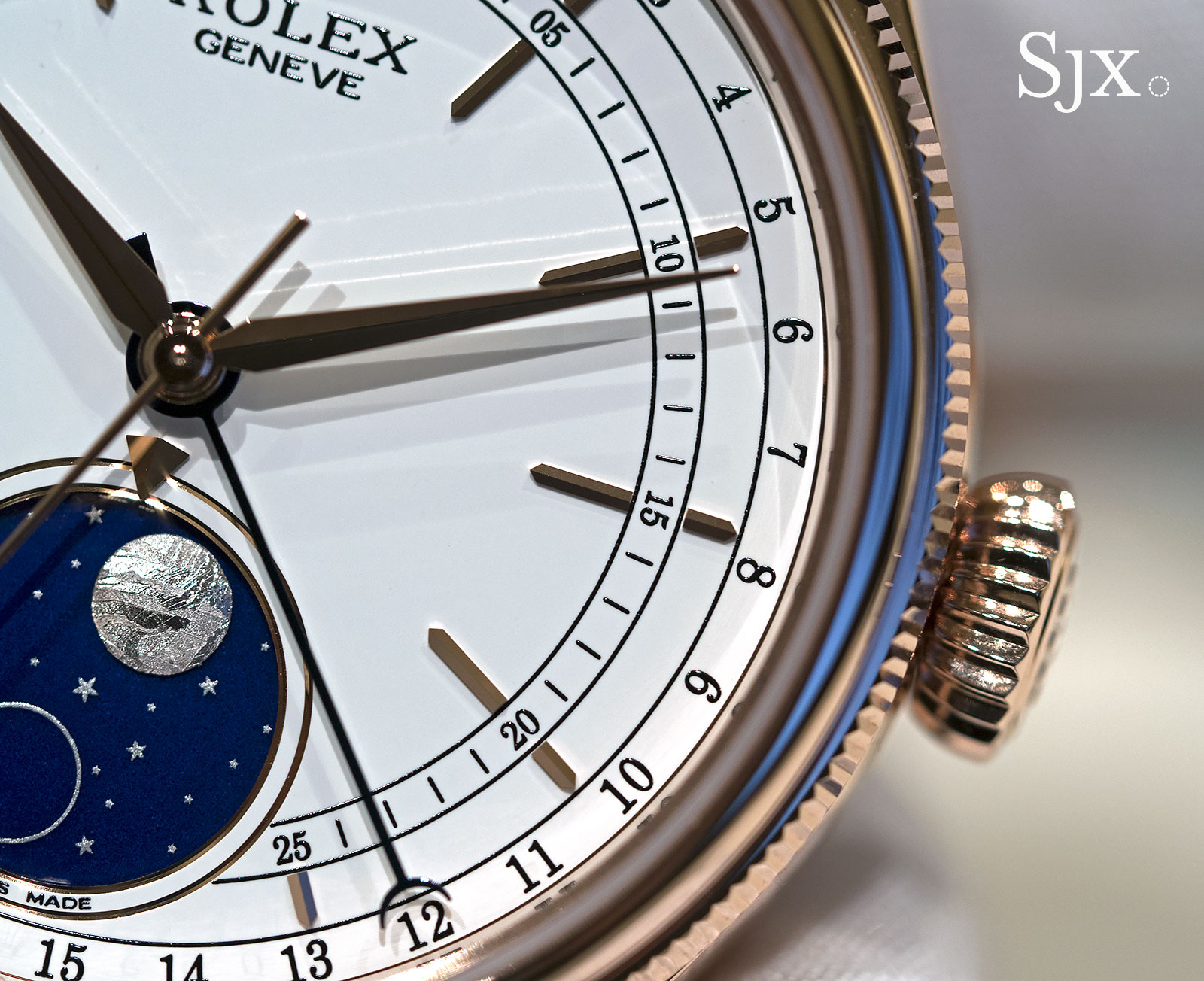 The last time Rolex produced a watch with a moon phase was in the early 1950s, when the references 6062 and 8171 “Padellone” were in production. Now the complication has made a comeback with the Cellini Moonphase, the latest addition to the line that made its debut in 2014.

While the inspiration for the new watch is decades old, the Cellini Moonphase looks and feels like a modern watch, or more specifically, a modern day Rolex, which is to say impeccably and precisely manufactured. Combining a moon phase and date pointer, the Cellini Moonphase is visually contemporary with a tiny bit of classical styling.

The dial is glossy white lacquer with neat black printing and applied gold hour markers. A railway minute track bisects the hour markers, while the date track sits on the edge of the dial. The concentric tracks on the outer edge of the dial give it a somewhat geometric look. Both the hands and hour markers are 18k pink gold

The crescent-tipped date pointer is blued (probably gold rather than steel since the latter oxidises over time and Rolex aims for eternity), matching the moon phase disc. Once in a blue moon

Advanced via a recessed button in the case at eight o’clock, the moon phase is accurate to a day in 122 years, the conventional standard in watchmaking.

Unusually the moon phase disc is fired enamel, an anachronistic finish for a brand that tends to prize technology. At an angle the uneven, slightly pockmarked surface of the moon phase disc indicates it’s vitreous enamel, rather than just lacquer. It’s the only element of the watch that is not flawlessly produced, which conversely makes it compelling. The new moon and stars on the blue enamel are printed in silver lacquer, while the full moon on the disc, however, is a disc of meteorite that’s been rhodium-plated, explaining the bright white finish. The case is typical Oyster – 39mm in diameter with a fluted back and bezel; the bezel is actually stepped, with fluting on the lower edge. And it’s all in 18k Everose gold, Rolex’s patented rose gold alloy that’s fade-resistant. Though not large, the case is large enough, giving it a reassuring weight in the palm. And the strap is attached to an 18k Everose gold Crownclasp, essentially a proprietary Role folding buckle, which further adds to the heft of the watch. Inside is the calibre 3195, a self-winding movement with a 48-hour power reserve and blue Parachrom hairspring. It’s hidden beneath a slightly domed screw-down back that’s typical in shape for the Cellini. A Rolex ref. 6062 from 1950 that’s the closest relative of the modern day moonphase