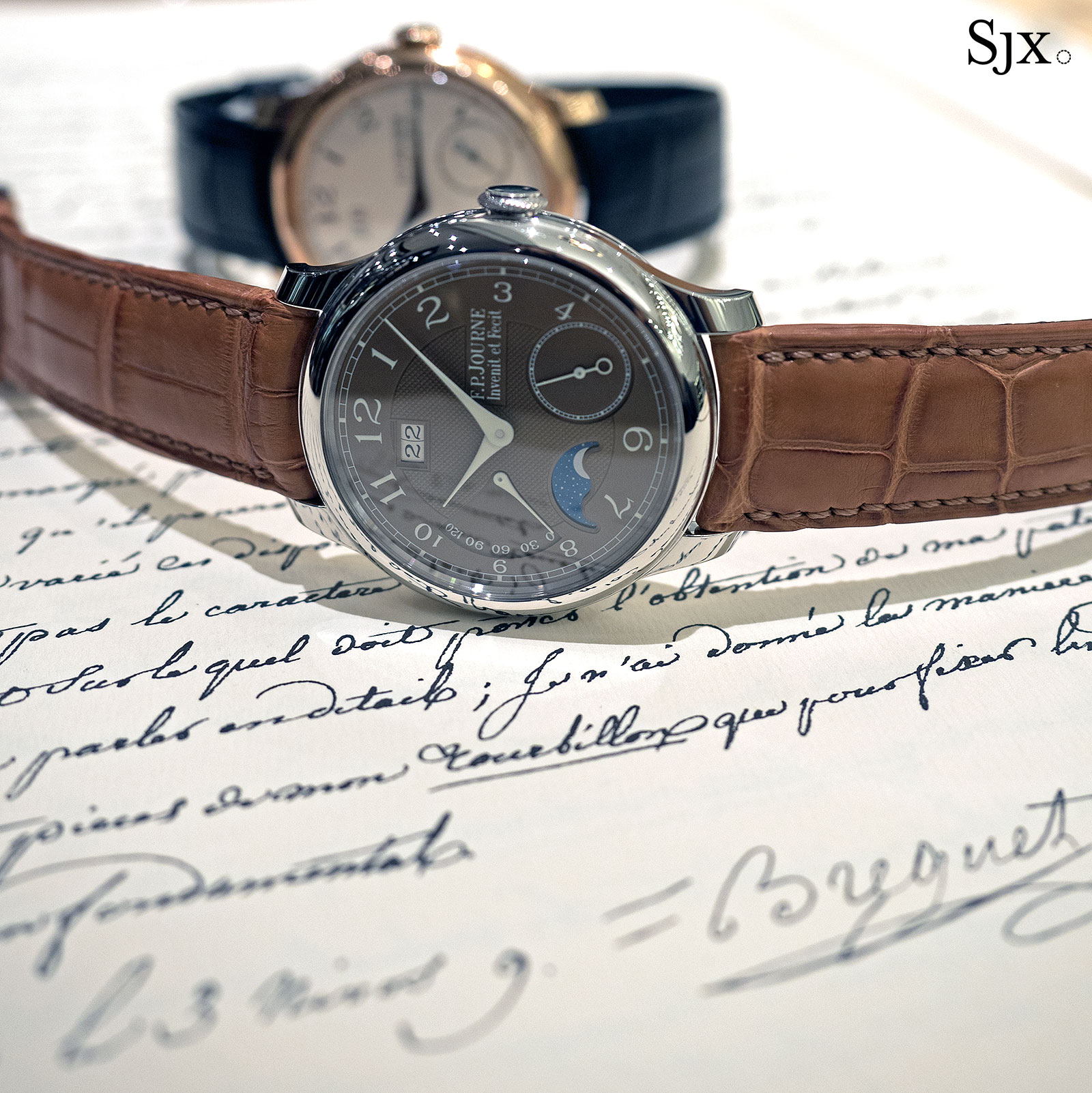 Despite being a small scale watchmaker producing about 800 watches a year, F.P. Journe has its own dial factory with a 50% stake in Les Cadraniers de Genève, while Vacheron Constantin owns the other half. This gives F.P. Journe a great deal of versatility with its watch dials, especially compared to fellow independent watchmakers.

The latest to emerge from the Geneva dial maker is the Havana, a medium brown tone that’s akin to milk chocolate that might be a sly nod to the current fad for faded brown “tropical” dials on vintage timepieces. The colour is the result of plating the dial disc with a combination gold and ruthenium, creating a brown colour with a tiny hint of grey. 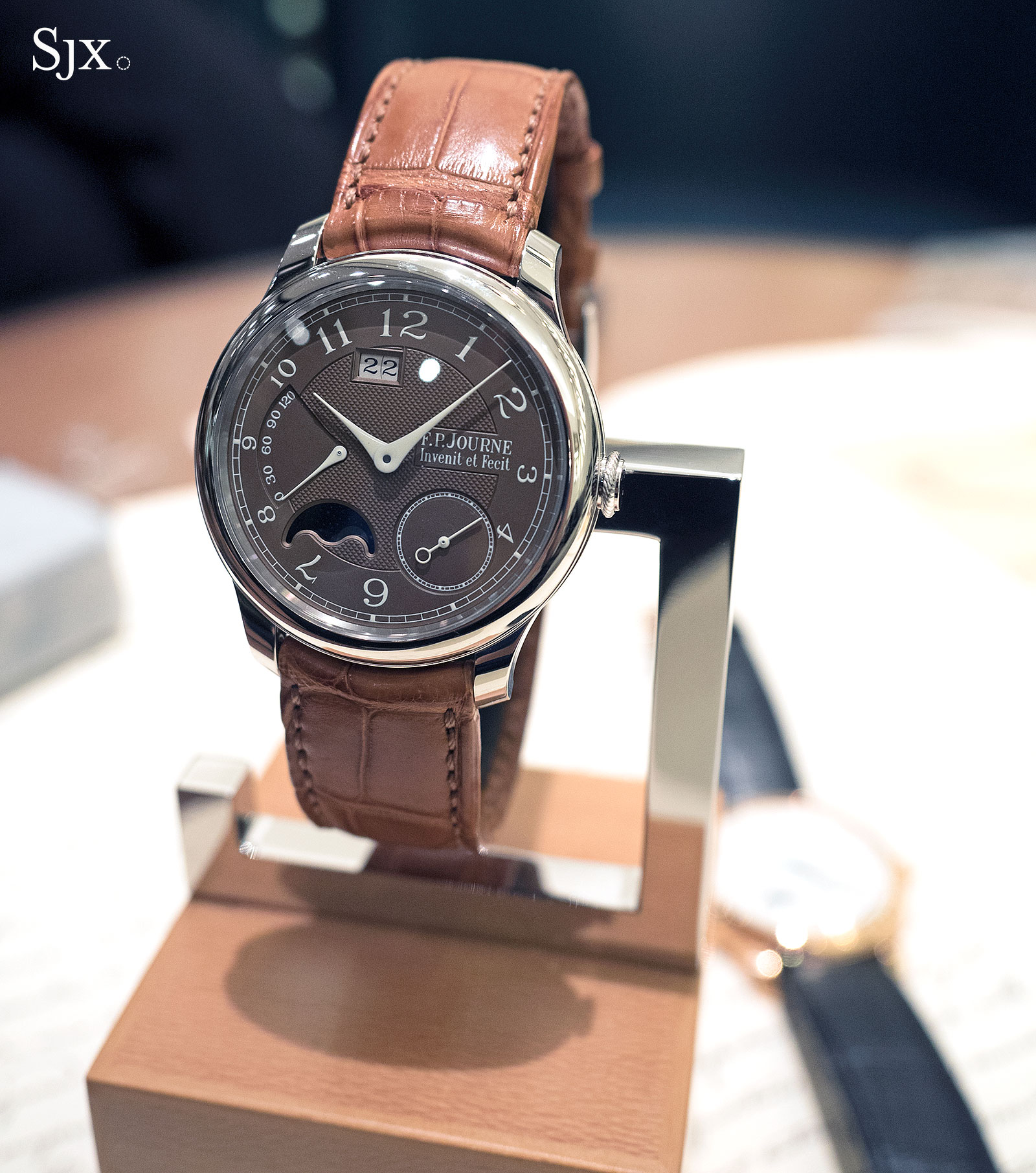 Strikingly different from the typical F.P. Journe dial, which is silver or black, the Havana dial, like many other brown dials, feels seasonal, being an autumn colour. So while more interesting than silver, it is arguably less versatile. While the colour differs, the dial is decorated identically to the standard dials, with a clous de Paris, or hobnail, guilloche in the centre. Design-wise nothing has changed either, with the dial retaining the clever “8” and “9” in smaller fonts to prevent the numerals from overlapping with the power reserve sub-dial. 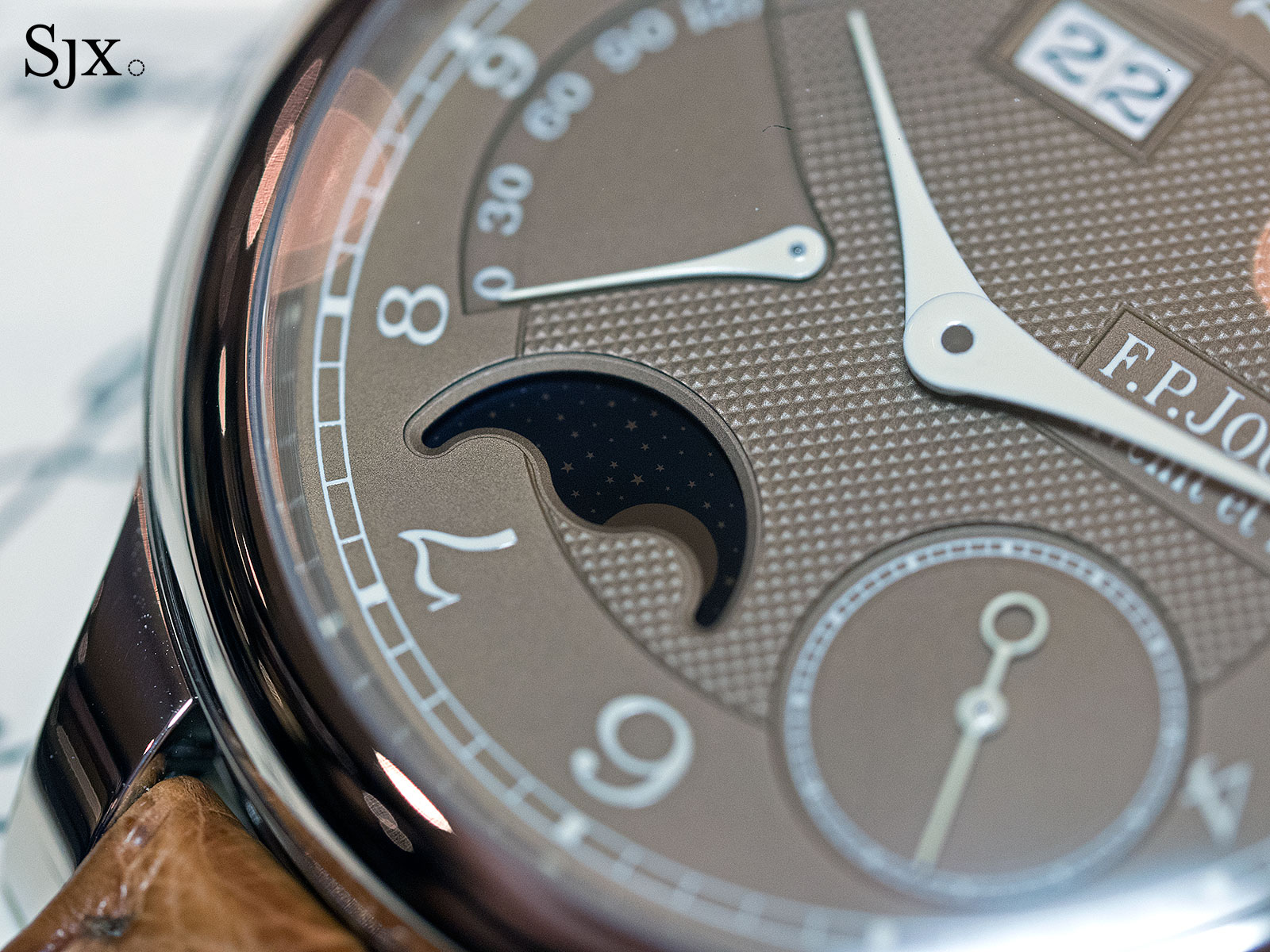 The Havana dials are available on two models for now, the Octa Automatique Réserve and the Octa Automatique Lune (pictured here), though there is talk of a Chronometre Souverain in the same livery. Both are essentially the same watch, with the latter distinguished by the addition of a moon phase display. 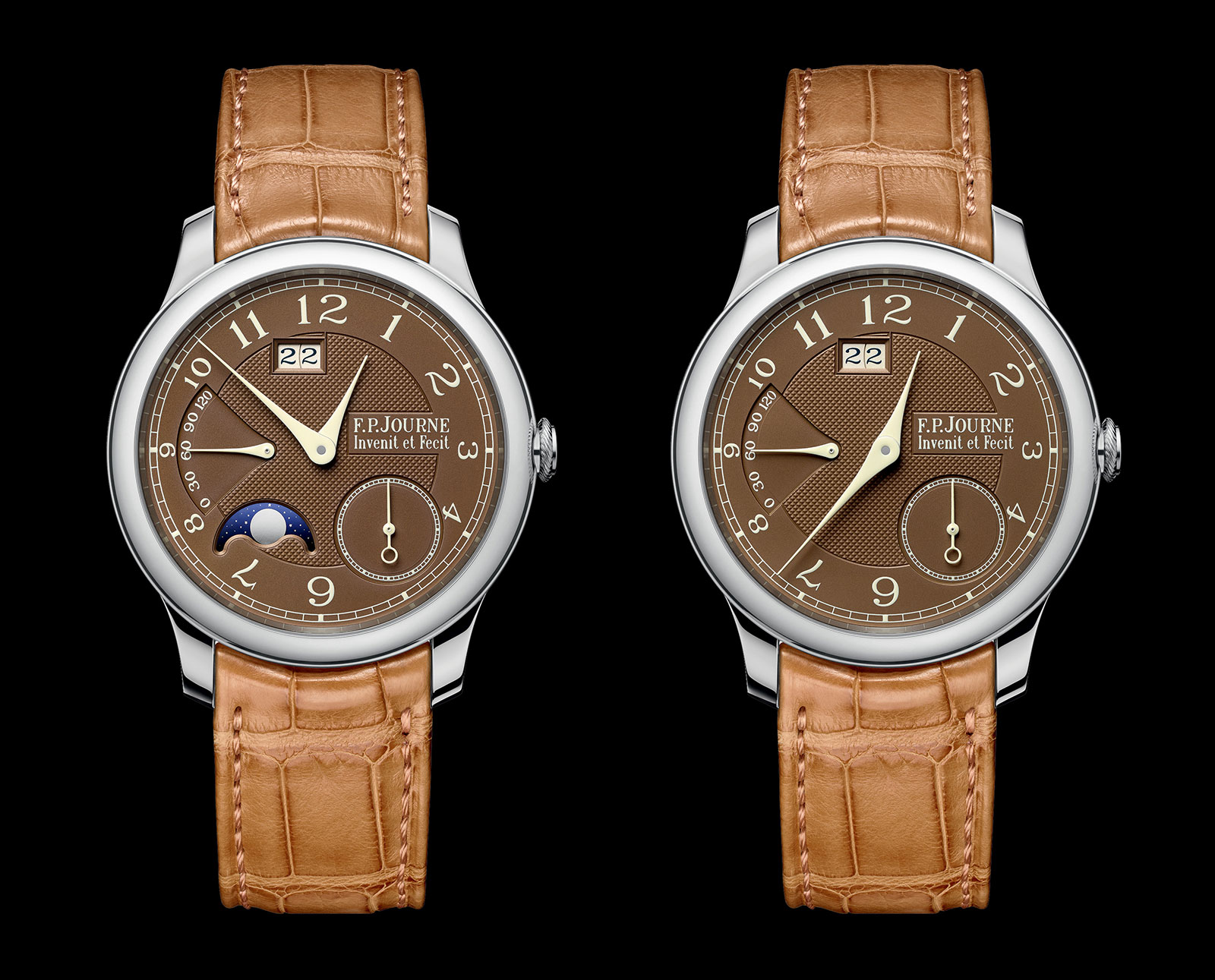 The case is platinum, available in either 40mm or 42mm size, while the movement is the calibre 1300.3. It’s automatic with a five day power reserve, thanks to a very large barrel that’s wider than the radius of the movement. But the movement remains flat, just 5.7mm high, despite the complications on the front, giving the resulting watches elegant profiles. 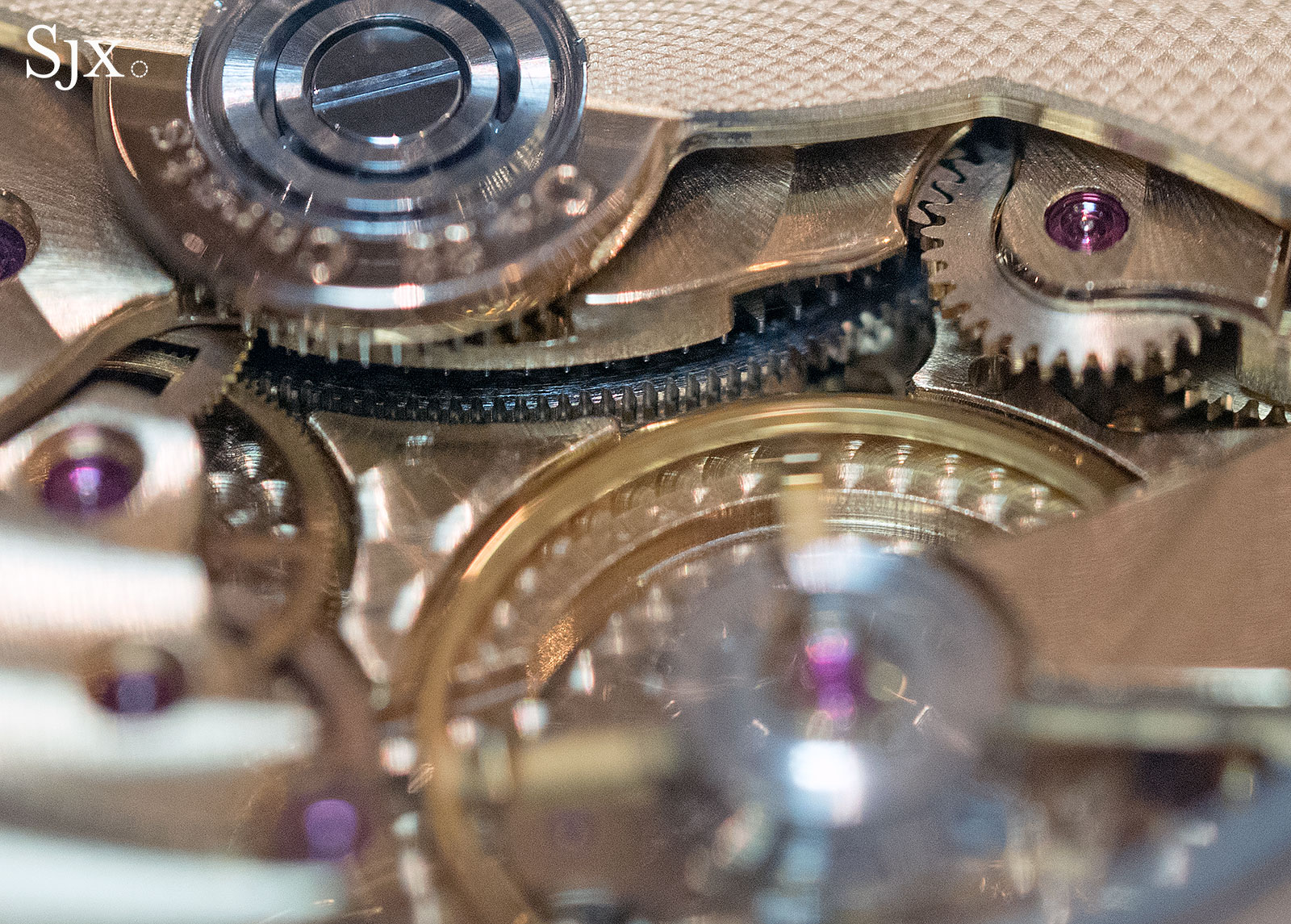 The edge of the steel barrel visible in the centre, almost touching the rim of the balance

Like all F.P. Journe movements the bridges and base plate are made of 18k rose gold, and attractively, if mechanically, decorated.