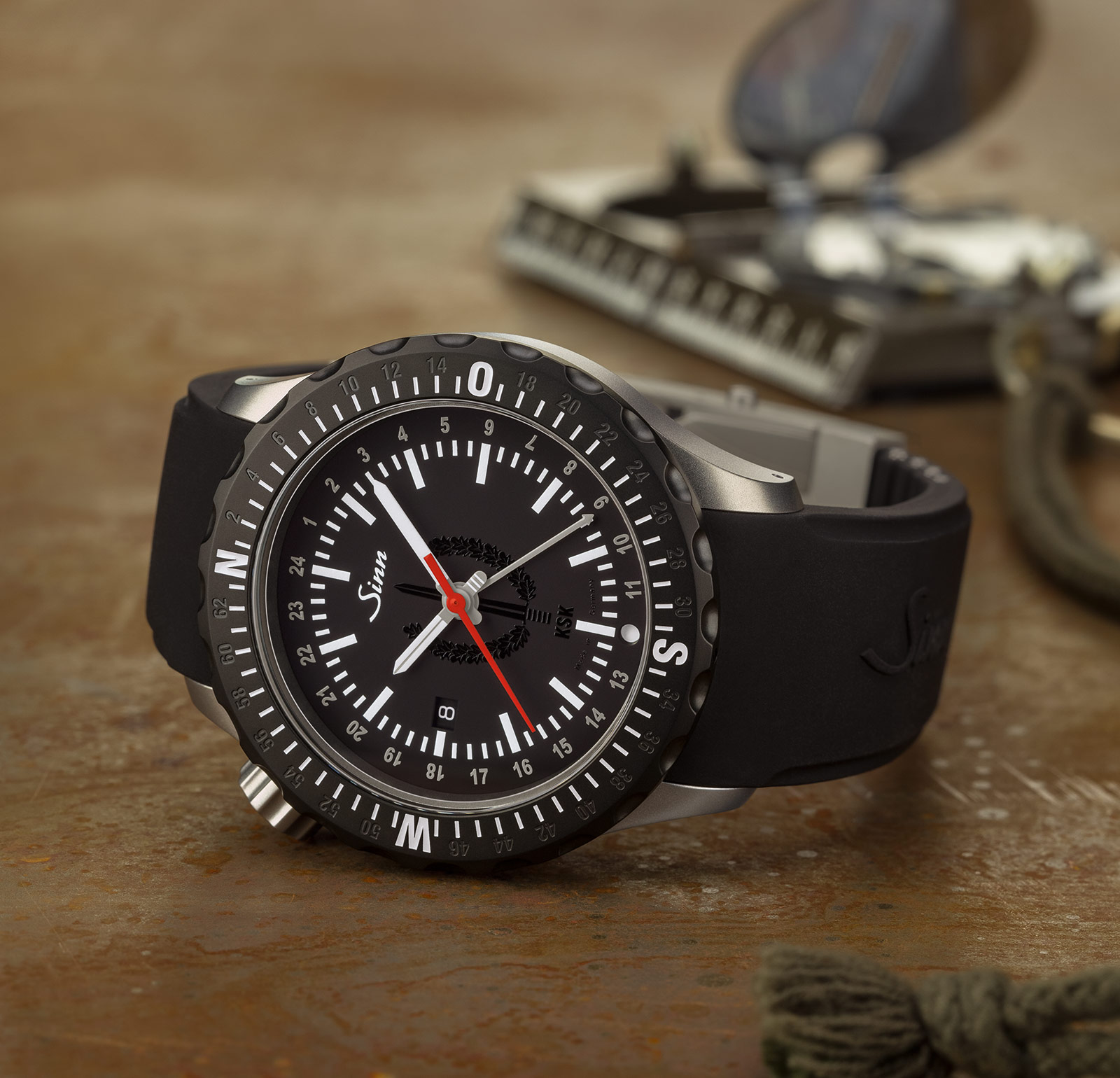 Sinn just revealed a trio of U-series dive watches at Munichtime 2016 (joining the U1 Camouflage from earlier this year), all featuring the key elements that define the line, including submarine steel cases and a no-nonsense military look. One of the three, in fact, is essentially a military watch.

The flagship of the new models introduced at the annual watch fair inside Munich’s Hotel Bayerischer Hof is the 212 KSK.

KSK is short for Kommando Spezialkräfte, the Special Forces Command of the German military, a unit that’s comprised of elite rapid deployment troops.

Already the official supplier of wristwatches to the commando frogmen of the navy’s Kommando Spezialkräfte Marine (KSM), Sinn’s 212 KSK is the civilian version of a wristwatch made to mark the 20th anniversary of the KSK.

The KSK-only edition was a run of 70 watches designed in collaboration with Gemeinschaft Deutscher Kommandosoldaten e.V., the association of German commando soldiers. While these were only available to members of the unit, the 212 KSK is a limited edition of 300 pieces available to civilians. Minor differences separate the civilian and military versions. Both are emblazoned the emblem of the KSK in the centre of the dial and feature an hour hand shaped like a sword, but the military version has a slightly different dial design and a green seconds hand (the civilian model has it in red).

Another unusual military inspired feature is the 64-click bezel, modelled on the 64-mil ratcheting of the German army compass. “Mil” is short for milliradian, a unit of angular measurement often used for mapping and artillery.

The bezel is a manual navigational tool: the twin hour hands can be used in conjunction with the compass bezel to determine direction, by aligning the bezel to north, which is determined via the time and position of the Sun.

The 212 KSK is equipped with a additional arrow-tipped hour hand showing a second time zone on a 24-hour scale. And it’s powered by an ETA 2893 automatic fitted with a GMT mechanism. Featuring the same case as the extra-large U212 dive watch, the KSK edition is 47mm in diameter and fitted with a bezel covered in a hard black coating. Additionally, the bezel is also treated with Tegiment, Sinn’s proprietary surface hardening process, to make it almost scratch-proof.

And the inside of the case is filled with Argon gas to prevent moisture seeping in. Whatever moisture that does get in is absorbed by a capsule containing copper sulphate visible on the dial at six o’clock. Next up are variants of the U1 featuring all-black cases; both are part of the regular collection and not limited editions. The cases are made of Tegiment-treated submarine steel that is then coated with a black ceramic layer. They are the standard 44mm U1 size, rated to 1000m and powered by the Sellita SW200, a clone of the ETA 2824.

The first is the U1 S, essentially the basic U1 in black and red livery, clad in black case. And the second is the U1 SE with ivory-tone Super-Luminova on the dial and hands for a faux vintage look that’s surprisingly similar to the U1-D limited edition made for Singapore retailer The Hour Glass last year. Addition October 29, 2016: Further information on the compass bezel, as well as the price of the U1 S and U1 SE added. 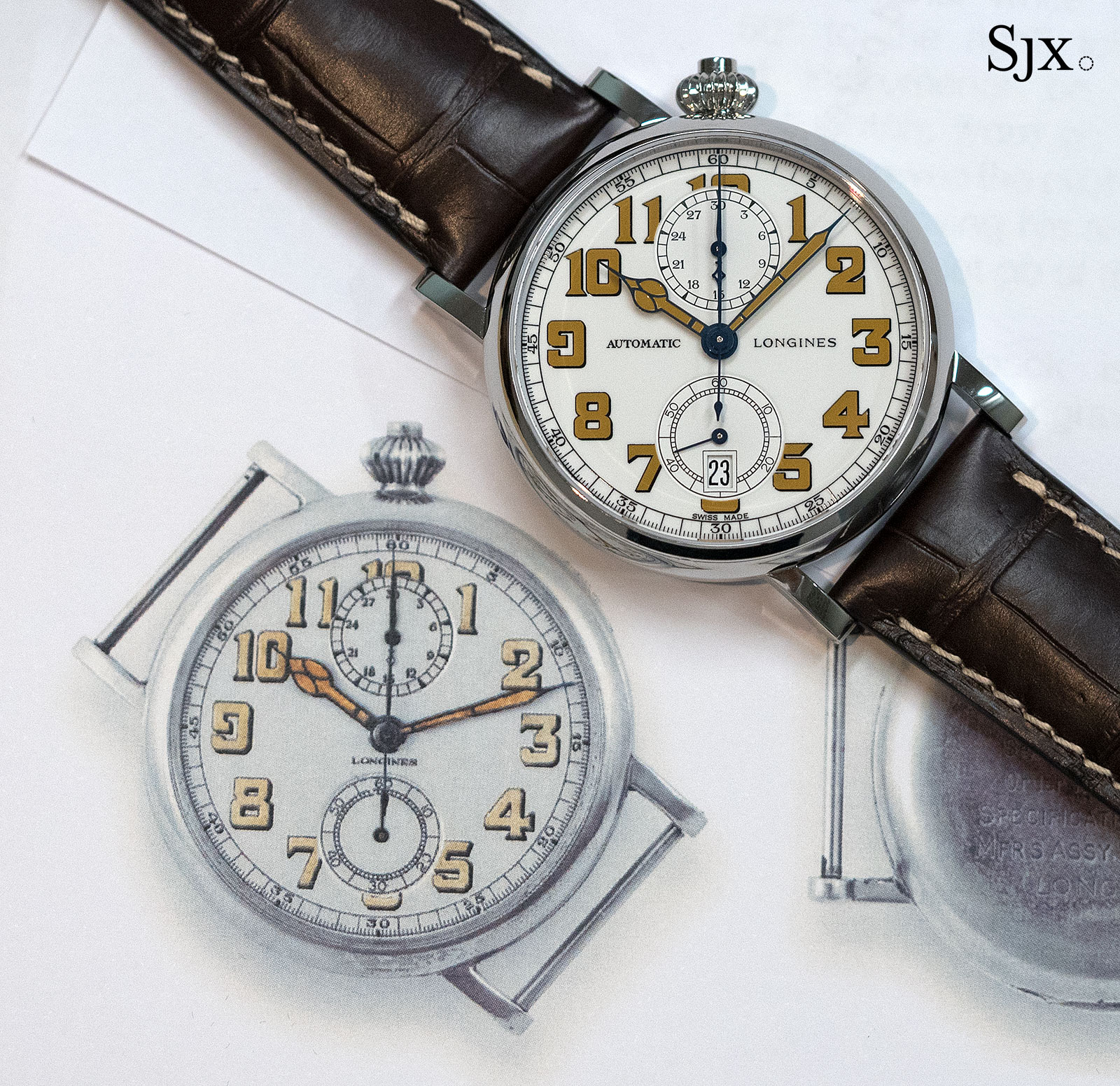 Longines has a winner with the new Avigation Watch Type A-7 1935.

Both unusual and striking, the Avigation Watch Type A-7 1935 is a remake of a remake (the first Type A-7 arrived in 2012). But the latest Type A-7 is an improvement, being markedly smaller and more wearable – and enticingly less expensive by almost a third.

The Avigation Watch Type A-7 1935 is modelled on a mid 1930s chronograph made for the US Army air corps. Named after the military spec for the type of watch, the Type A-7 had the movement and dial offset by 40 degrees from the vertical. This unusual position allowed pilots to read the dial without having to let go of the yoke, the equivalent of a steering wheel on a plane. The new Type A-7 is an eminently wearable 41mm. But despite being significantly smaller, it still has a lot of presence. For one the watch seems larger than it actually is, due to the white dial and narrow bezel. Throw in the off-centre dial alignment and oversized Gothic numerals, and it is hard to miss. Finished in glossy white lacquer to mimic the look of the porcelain dial on the original, the dial has honey-coloured Super-Luminova on the hour numerals and hands. While the pale brown shade is intended to replicate the look of aged radium on vintage watches, it is a bit excessive, though forgivable.

That’s complement by attractive blued steel hands and serif-font numerals on the dial. Like all Longines Heritage remakes the Type A-7 is afflicted with a date window at six o’clock, a modern convenience that looks completely incongruous with the vintage design. That being said, the date is not overly prominent. The Type A-7 is equipped with the calibre L788.2, an automatic with a 54-hour power reserve. Based on the ETA A08.L11, one of the Valgranges series of extra-large movements, the L788.2 is nonetheless heavily upgraded. The airplane motif on the solid case back

It’s a single-button, or monopusher, chronograph, with one button for start, stop and reset of the chronograph. Additionally, the traditional cam to control the stopwatch functions has been replaced by a column wheel, a feature typically found in more expensive chronographs. The single button integrated into the crown

This is the same movement found in the first generation Type A-7 remake, and also in the more recent Column-Wheel Single Push-Piece Chronograph and Pulsometer Single-Button Chronograph.