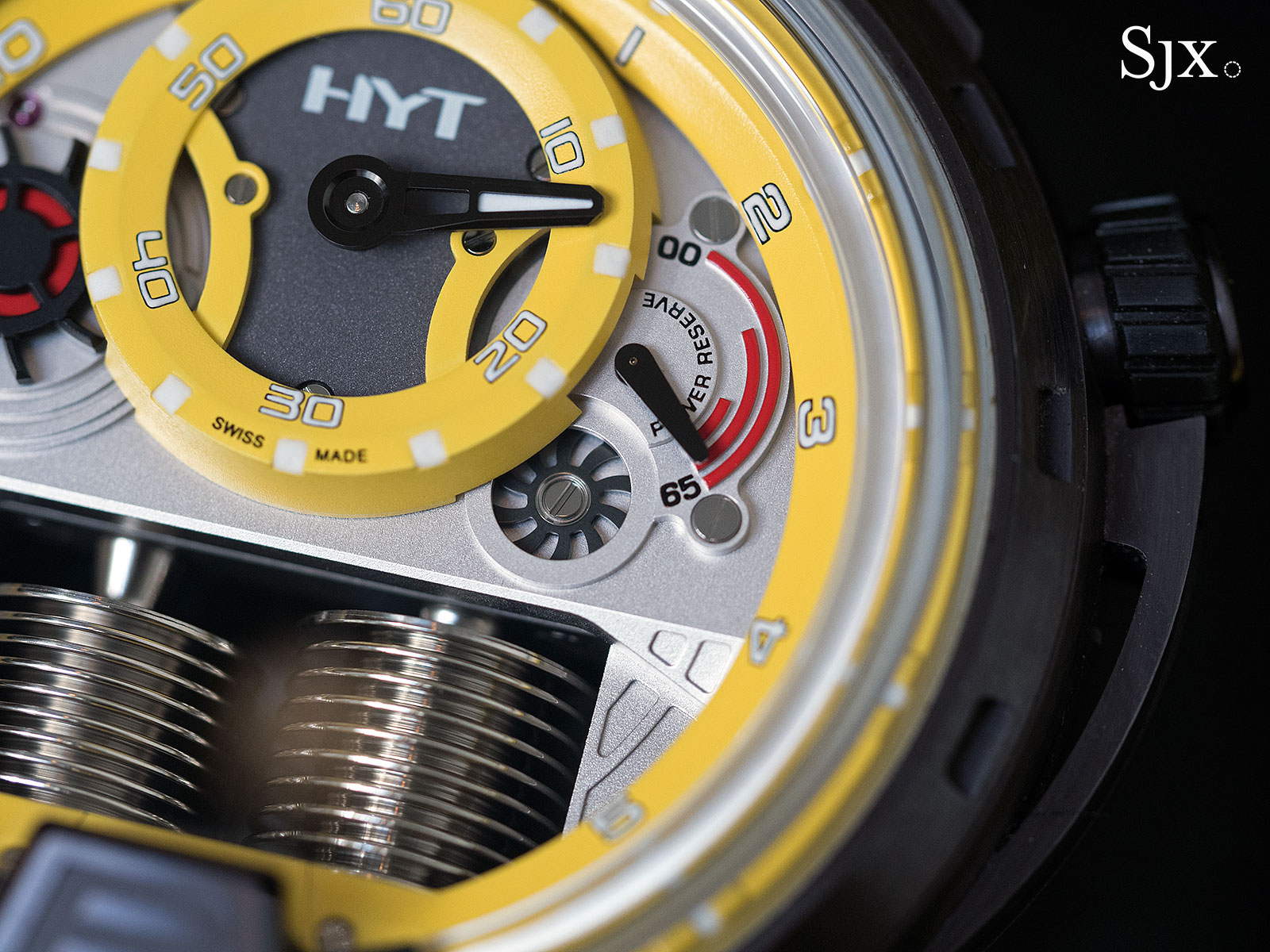 Available in three bright colours, the H1 Colorblock is a limited edition to mark HYT’s third anniversary. It’s a variant of the brand’s first wristwatch and now the entry-level piece in the HYT line-up, priced at SFr39,000, a third less than the next most expensive model.

Both the chapter rings for the minutes and hours on the Colorblock have a semi-glossy, brightly coloured finish, matched by the fabric strap. Of the three, the yellow is the most striking, the red is a muted shade, and the blue is perhaps the most restrained. Mechanically identical to the H1, the Colorblock indicates the minutes on a sub-dial at 12 o’clock, while the hours are shown on a glass capillary filled with two liquids, one clear and the other black.

The meniscus between the two liquids points to the hour, pushed along by the twin bellows visible at six o’clock. At the top of the hour, the meniscus quickly rushes back to zero like a retrograde hand, before starting over. For nighttime legibility, the glass capillary is coated with luminescent Super-Luminova on its underside, which gives it a green glow in the dark. Because the black liquid inside is opaque, the hours are clearly visible against the glow.

Seconds are indicated by the fan-shaped wheel at nine o’clock, while the scale at three o’clock is for the power reserve indicator. Occupying the upper half of the hand-wound movement, the timekeeping portion was developed by Chronode, a complications constructor run by Jean-Francois Mojon, well known for movements made for the likes of MB&F. But the bellows-driven, liquid time display was the work of Preciflex, the sister company of HYT that specialises in fluid delivery via tiny tubes. The case is titanium with a gunmetal (bluish-grey) coating and a brushed finished. It’s 48.8mm in diameter and 17.9mm high, making it a visibly large watch, though the short, downward curved lugs help it sit on the wrist. 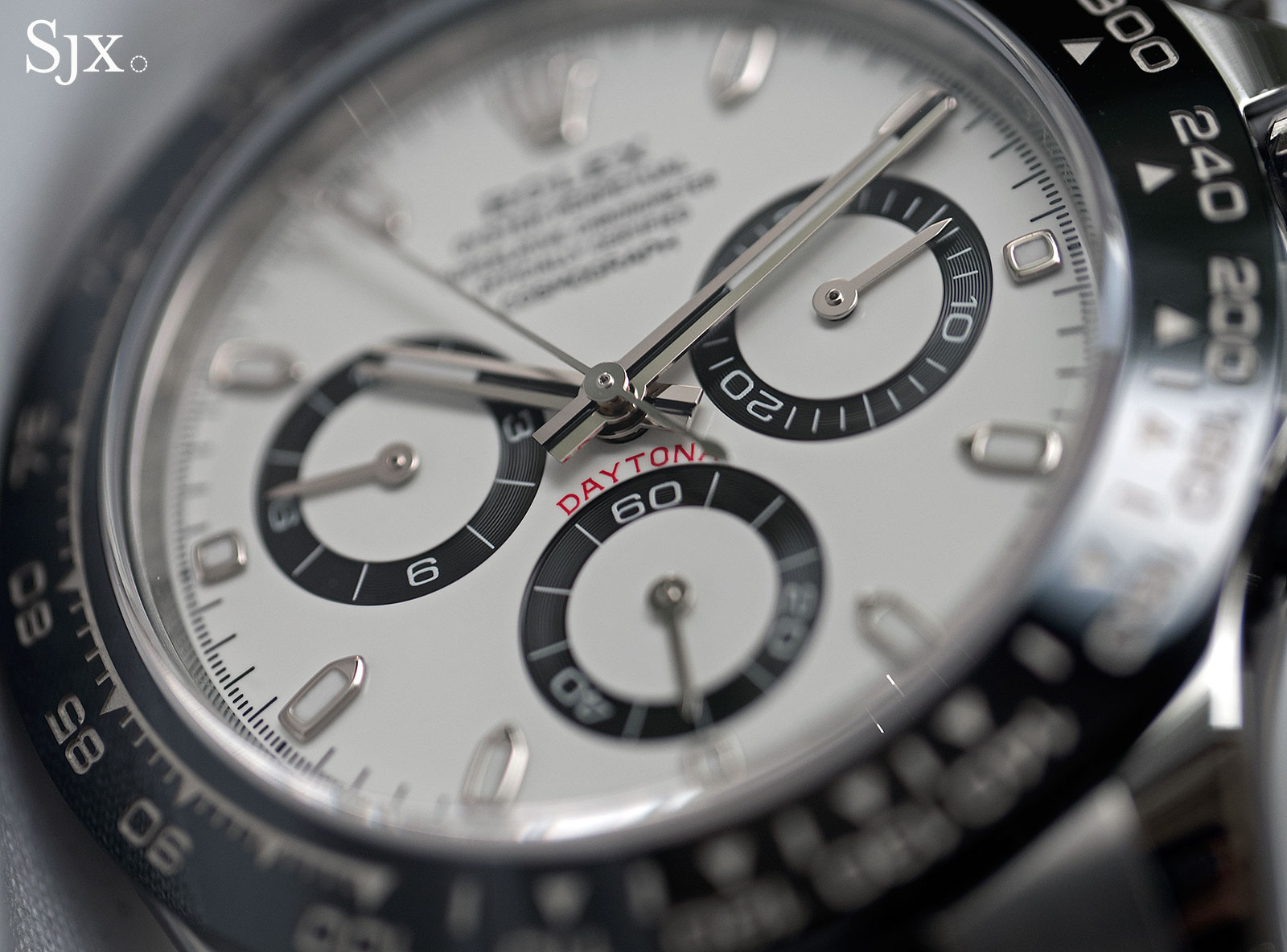 Put up in collaboration with retailer The Hour Glass, the Rolex Daytona exhibition is the first of its kind in Singapore, outlining the history of the Cosmograph Daytona with panels and interactive displays.

Introduced in 1963 and now regarded as one of the most important chronograph wristwatches ever, the Rolex Daytona was named after Daytona Beach, a stretch of hard-packed sand that’s the location of the Daytona International Speedway. Now host to the annual NASCAR Daytona 500, the Daytona racetrack was built in 1959 but already inextricably linked with Rolex and motor racing decades earlier when Sir Malcolm Campbell set the world land speed record there in March 1935 – with a Rolex Oyster on his wrist. The current Rolex Daytona collection will also be on shown, including the latest ceramic Daytona ref. 116500LN.

The Daytona exhibition is open daily from October 4 to 9.

One of the largest Rolex stores in the world is now open in Singapore and even includes a first-of-its-kind exhibition of inventions and achievements.