A weekend dedicated to the very best in life takes place in Singapore September 24 and 25. Conceived as a showcase for some of the finest vintage cars in Singapore – including a Ferrari 250 GTE and Jaguar E-Type – the Classic Car Weekend organised by collectibles marketplace Luxglove also features rare whiskies, timepieces and other collectibles.

Expert talks are a highlight of the two-day event, including a panel session on watch collecting, vintage and modern. Moderated by SJX, the panel comprises watch industry luminaries: Michael Tay, who runs the largest watch retailer in the region; Oliviero Bottinelli, the Chairman of Audemars Piguet Asia; and Nicholas Biebuyck, Christie’s watch expert in Asia.

Space for the talks are limited, so please reserve a seat via email. 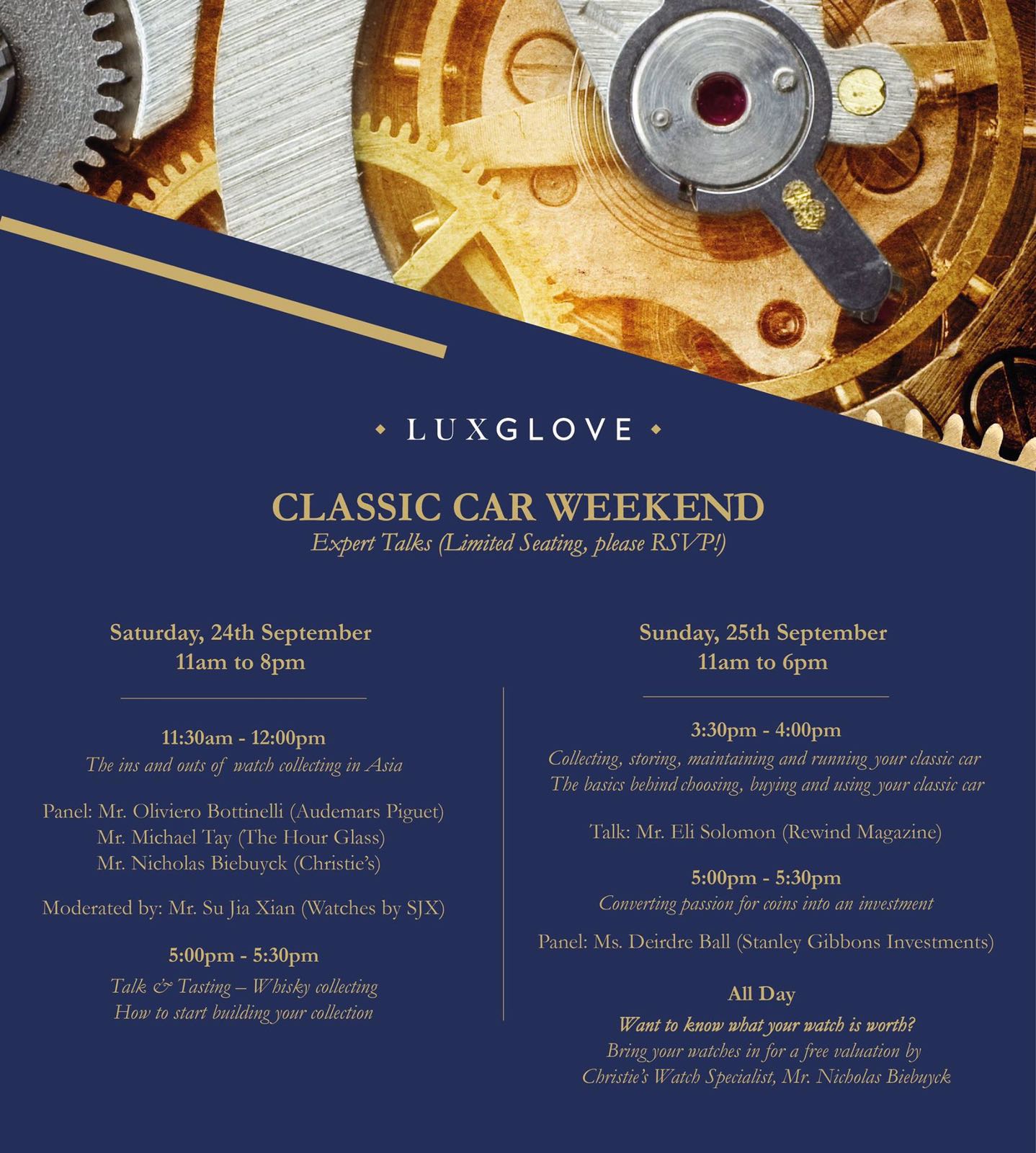 Details the Classic Car Weekend is as follows:

Entry is open to anyone who has the Luxglove app on their smartphone (downloads for iOs and Android). More information can be had from Luxglove.

Correction September 22, 2016: Closing time of event amended to 6pm, and not 8pm as stated previously.

News: Lange at the Concorso d'Eleganza Villa d'Este - a classic watch for a classic car 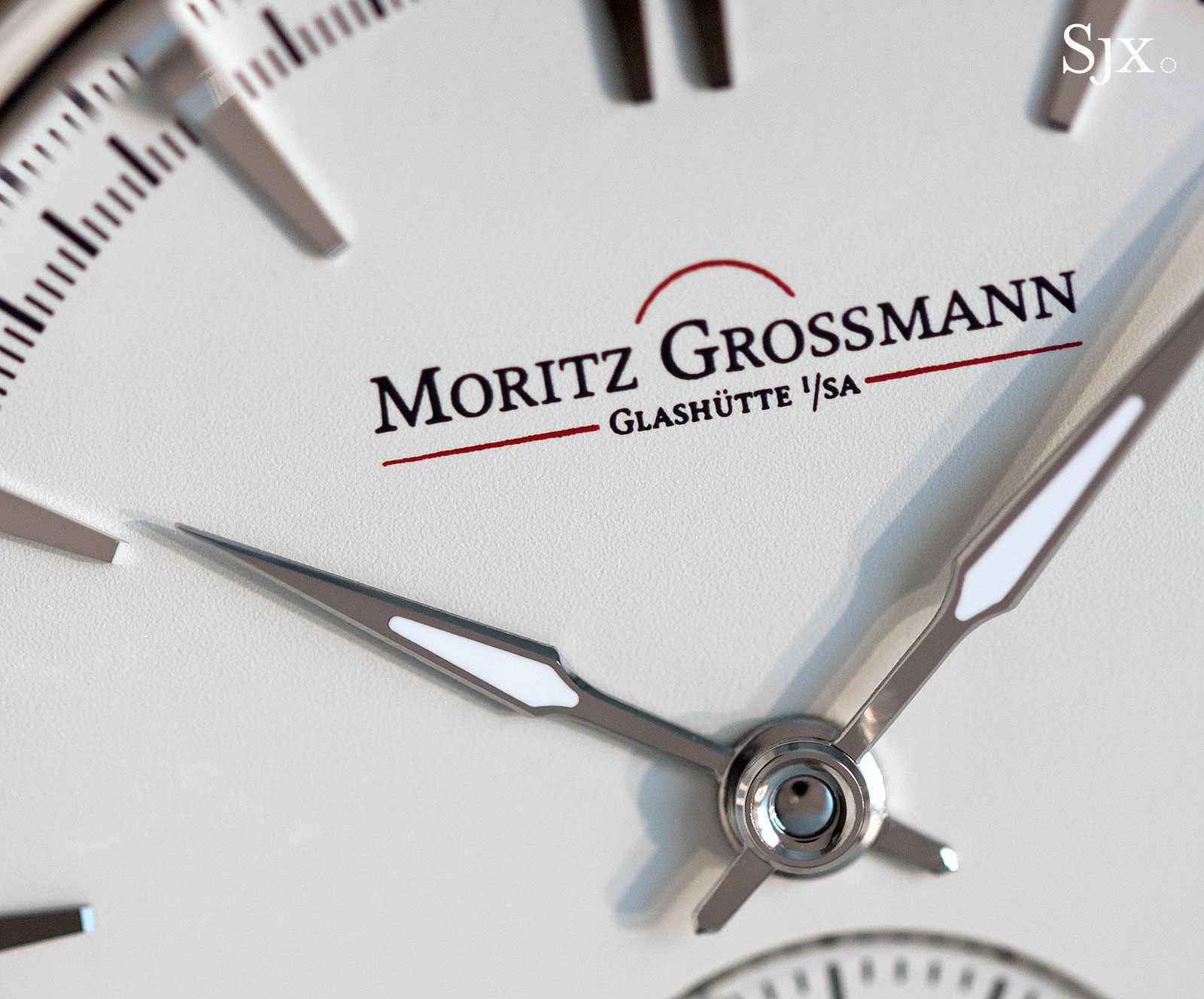 Moritz Grossmann is a newish manufacturer located across the street from A. Lange & Söhne and Glashütte Original, and like many of its compatriots in the same town, is a revival of an old name in German watchmaking. The brand got its start with exceptionally well constructed and finished watches powered by top class movements that, by definition, are relatively pricey.

Consequently Moritz Grossmann has detuned its movements, essentially leaving out the hand-finishing, and put them in stainless steel cases. The result is the classical Atum Pure, and the more modern Atum Pure M – both of which cost about a third of the fully featured models. Both watches are a lesson in how to produce a simplified, entry-level watch that remains high quality.

Functionally, the Atum Pure is identical to the fully featured Atum, which is named after an Egyptian god, like all of the brand’s watches. The Atum is hand-wound with an ingenious and useful stop seconds mechanism that Moritz Grossmann has patented. Pulling the crown to set the time stops the seconds hand, but the seconds hand only resumes moving when the button at four o’clock is pressed. This allows for more exact time setting.

Likewise, the case remains the same 41mm, with thick, longish lugs and sloping case sides. Because the case is a thick 11.35mm in height, the watch has a presence on the wrist. 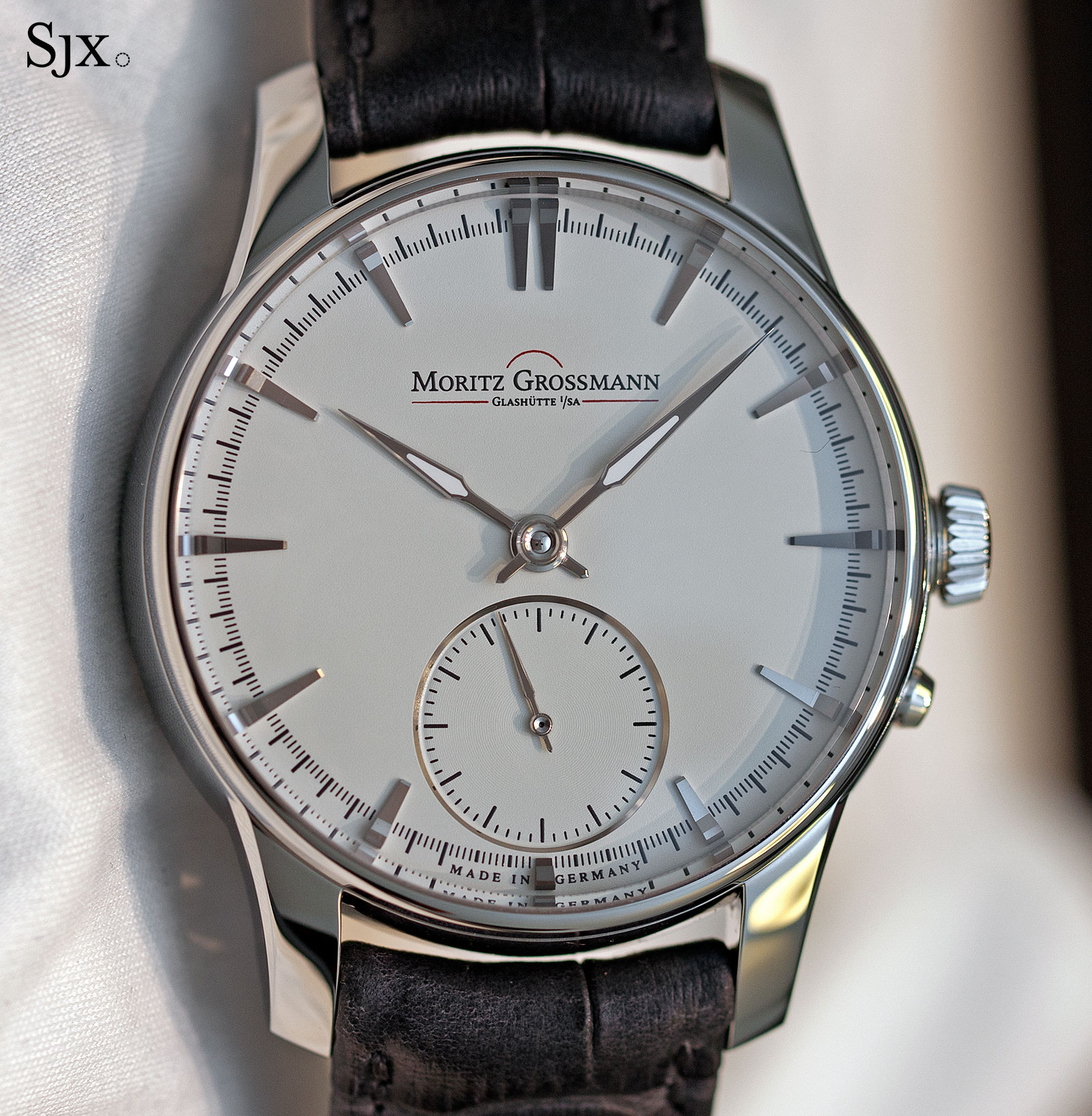 Pure but not proletarian

The difference between the Pure and top of the line is the finishing. Moritz Grossmann labels the decor on the movement “Pure Classic Finish”, with most of the decoration is done by machine instead of by hand. So while the construction and functions of the calibre 201.1 remains the same, as do the materials used, the finishing is heavily simplified.

The three-quarter plate, for instance, remains German silver, but is finished with a fine frosting that’s done via bead-blasting. And the wheels are steel, with a circular graining and no bevelling on the individual teeth. Similarly, the lettering on the three-quarter plate and case back is laser engraved, instead of hand-engraved. 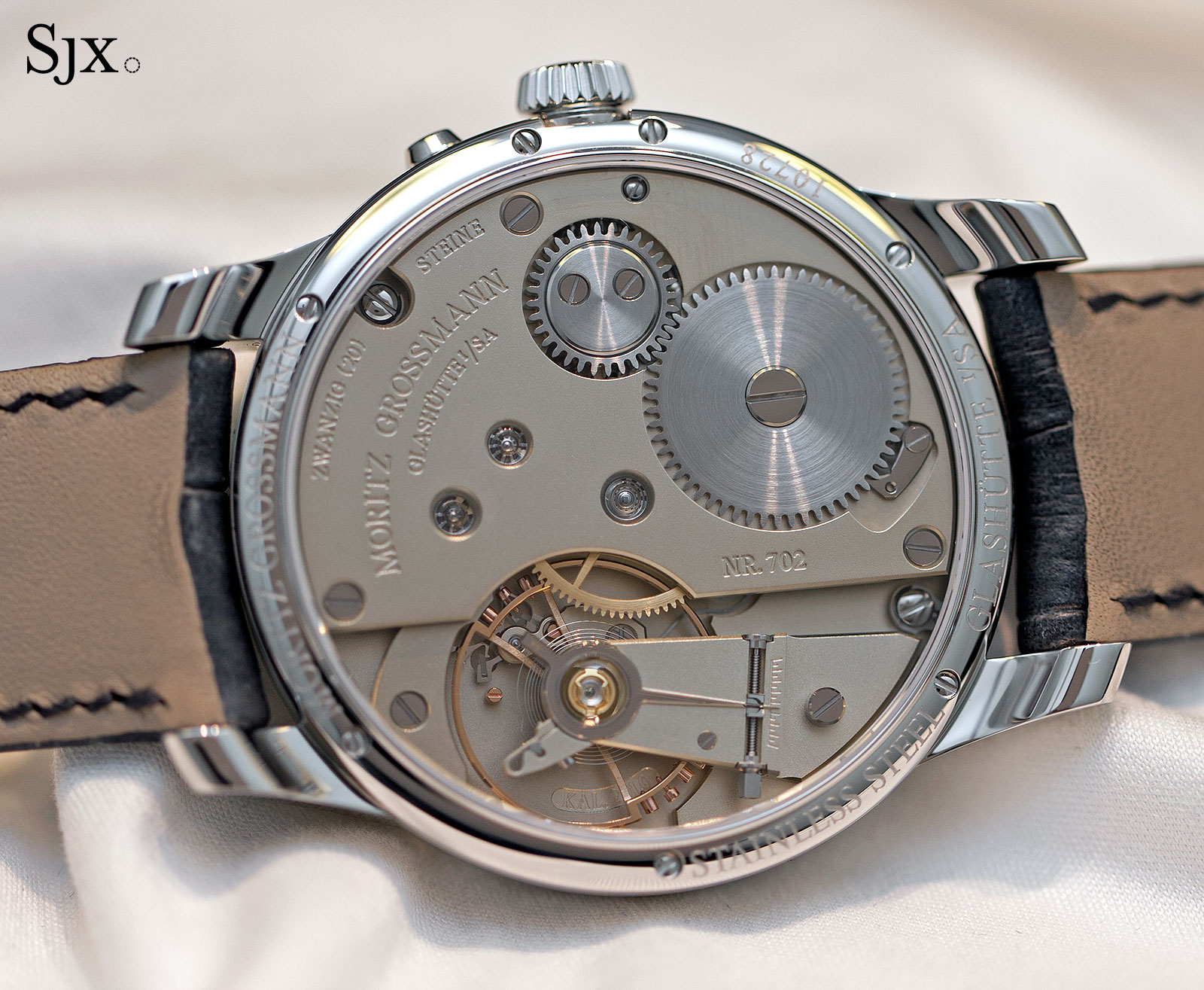 Clear, white sapphires are used for the jewel bearings hence the monochromatic look, while the adjustable mass balance is a proprietary design that maximises the balance diameter by recessing the masses 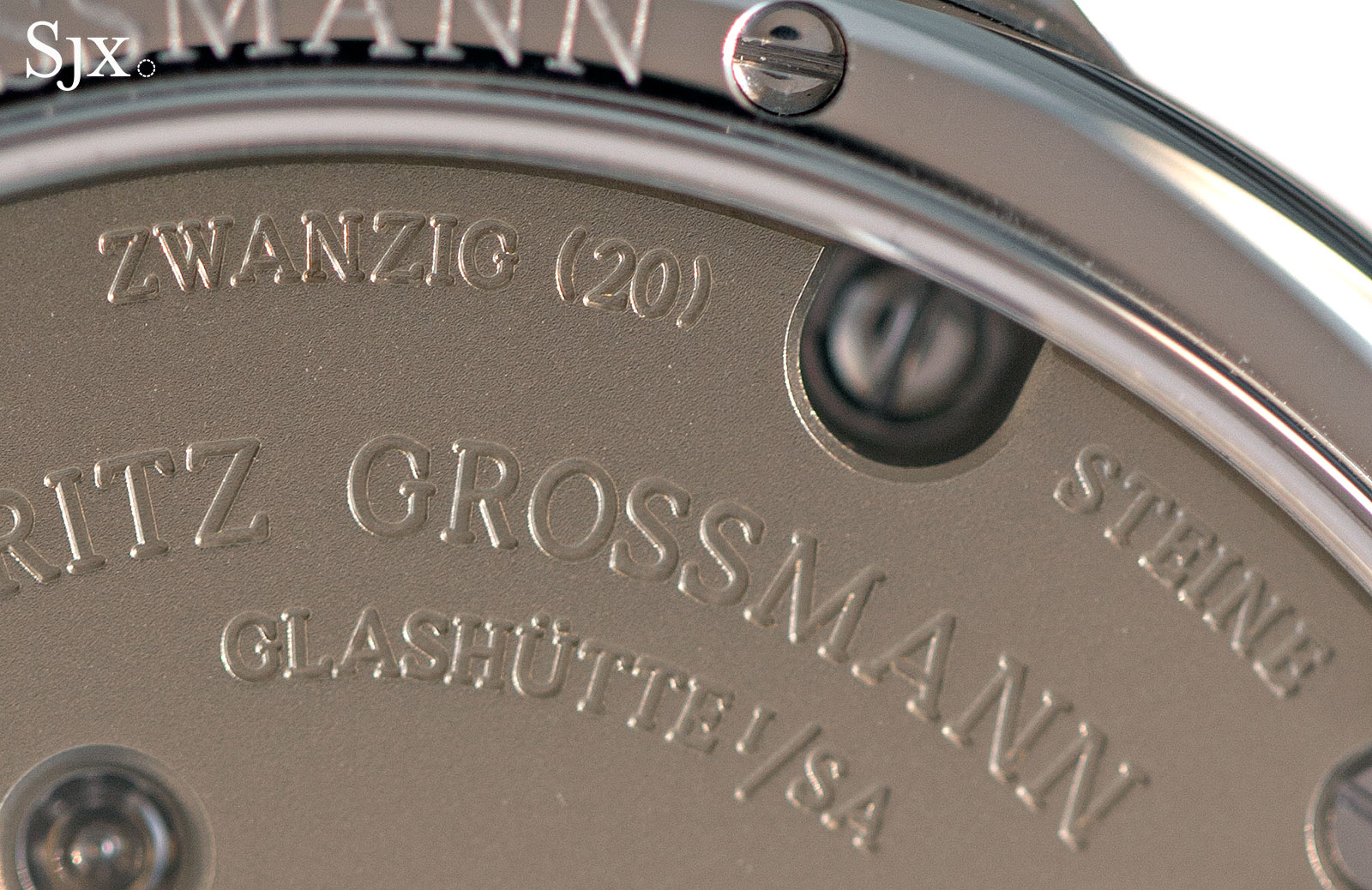 Although the movement decoration is evidently simplified, wonderful details abound. The trademark micrometer regulator for adjustment is still used, with a murderously sharp regulator index that is a masterpiece of micro-machining. Even the screw heads have chamfered edges and slots, albeit not not polished to the degree on the top of the line movements. 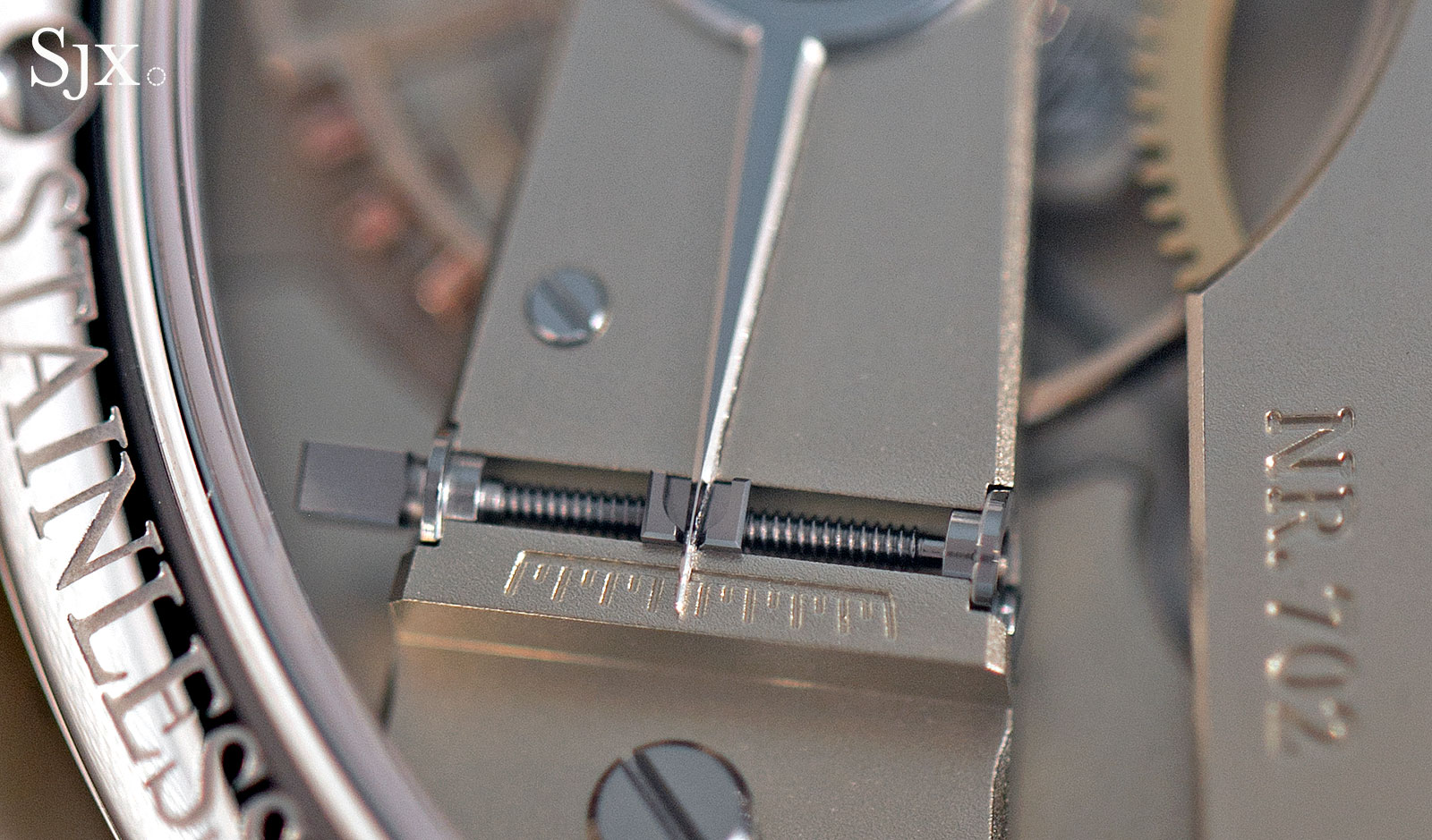 Considered in isolation the movement is attractive, with a slightly modern look despite the vintage styling, and a fine piece of engineering for the money. But compared to the fully finished, no expense spared movements found in Moritz Grossmann’s top of the line watches, the Pure Classic Finish is plain. Nonetheless, it remains one of the best movements in this price bracket.

Design-wise the dial of the Atum Pure sticks closely to the Atum, with the familiar lance-shaped hands Moritz Grossmann uses on all its watches. Though the dial is simpler than that on the top of the line model, it’s is surprisingly elaborate.

The dial is lacquered brass while the hour markers are stainless steel batons that have been cut with a diamond-tipped drill. Each hour marker is remarkably fine, with precise surfaces and sharp edges. Similarly, the hands are steel and notably well finished, with brushed flanks, bevelled edges and a polished top surface. The hands are actually open-worked, with the aperture filled with HyCeram. It’s a ceramic composite paste that applied into the space and then baked in an oven to set. Three dial finishes for the Atum Pure are available, matte white, blue or grey. The latter two colours have a vertical brushed finish on the slightly glossy dial that stands up to scrutiny up close. Interestingly, the Moritz Grossmann logo works best on the Atum Pure. Being a contemporary in form, the logo suits the look of the Atum Pure, while it looks out of place on the traditionally styled models. The Atum Pure M takes the modern look a step further with an unusual dial that Moritz Grossmann produces in-house. Made of stainless steel, the dial is made of six parts with a centre portion in wire mesh. While the look takes some getting used to, the quality of the dial is impeccable. The fine wire mesh reveals some of the movement, particularly the levers that work the stop seconds mechanism. Just as with the Atum Pure, the dial is admirably detailed up close. The hands remain the same, except that the HyCeram filling is available in white, orange, blue or green, with matching accents on the dial. They are available from Moritz Grossmann retailers.