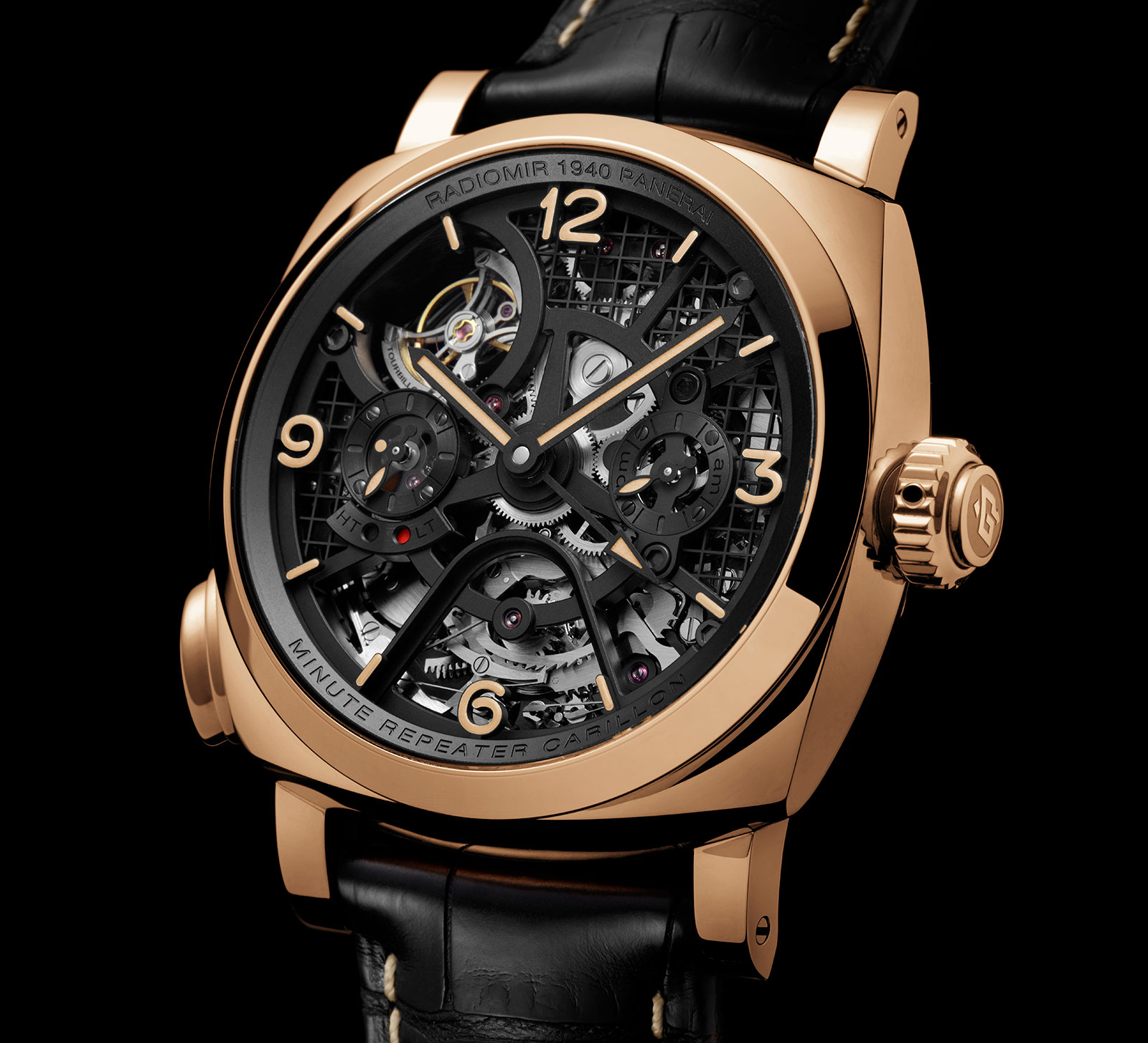 Panerai’s line-up at SIHH 2016 was conventional and modest, with lots of retro-style watches typical of the brand. Now, three months after SIHH comes the sucker punch with the announcement of the Radiomir 1940 Minute Repeater Carillon Tourbillon GMT PAM00600.

This 49 mm monster is the most complicated Panerai watch ever, possessing a decimal repeater with three gongs that can strike two different time zones as well as a tourbillon, all in all a daring and astonishing move given that the luxury watch industry has slowed considerably. Several features differentiate the Radiomir 1940 repeater from conventional repeaters. To start with it has three hammers and three gongs, one more than is typical, hence the “carillon” moniker. A button at eight o’clock activates the chimes, with the first and third gong sounding the traditional high and low notes of a repeater for hours and minutes respectively.

But in between the hours and minutes, the second gong sounds a triple chime, with each triple strike representing a ten minute segment, making this a decimal repeater. This is a more intuitive manner of sounding the time as compared to the traditional chiming of quarters, and found in few other repeaters; the Voutilainen decimal repeaters being amongst them. The other unusual feature of the repeater is the second time zone striking function, a feature that’s found on only one other watch, the Louis Vuitton Escale Worldtime Minute Repeater (which is not a decimal repeater). Two time zones are shown on the hands, local time with a triangle-tipped GMT hand and home time via the main hour hand. The decimal repeater can strike either home or local time, with the crown serving as the chiming selector.

A black dot on the crown on the fluting of the crown indicates it is locked; rotating the crown slightly and then pressing it switches the chiming mechanism from home to local time, and vice versa. The time selected is indicated by a red dot below the nine o’clock sub-dial, with “HT” and “LT” representing each time zone. In order to optimise the sound of the repeater, the red gold case has a hollowed out interior to minimise the mass of the case, improving sound transmission and volume; it is for this reason platinum case minute repeaters tend to sound muffled, as the case material is dense. But as the PAM00600 is made to order and customisable, the case can be in any other metal, including titanium, which should sound better.

Made up of 633 parts – compare that to the 239 components of the simpler Panerai tourbillon calibre – the P.2005/MR movement inside the minute repeater is hand-wound with a four day power reserve. The repeater movement is partially open-worked, revealing the racks and snails of the repeater mechanism at six o’clock on the dial side.

An aperture at 11 o’clock contains the tourbillon regulator that is unusual for both its speed of rotation, 30 seconds instead of the conventional one minute, and its construction. While most tourbillons have the cage rotating parallel to the plane of the dial and balance wheel, the Panerai tourbillon is perpendicular, turning like a spit over a fire. On the back the hammers and gongs of the repeater are visible; the hammers sit at six o’clock while the governor (a device the regulates the speed of the chiming) sits to their right. And the two mainsprings that power the watch are at eight and eleven o’clock, seen through the skeletonised barrels. Intriguingly the layout of the repeater mechanism does have a passing similarity to the Rotonde de Cartier Grand Complication; Cartier is of course a sister company of Panerai in Swiss luxury conglomerate Richemont. The Radiomir 1940 Minute Repeater Carillon Tourbillon GMT PAM600 is made to order, with various options for customisation, including the case material, dial colour and hands. It starts at €359,000, or about US$414,000. 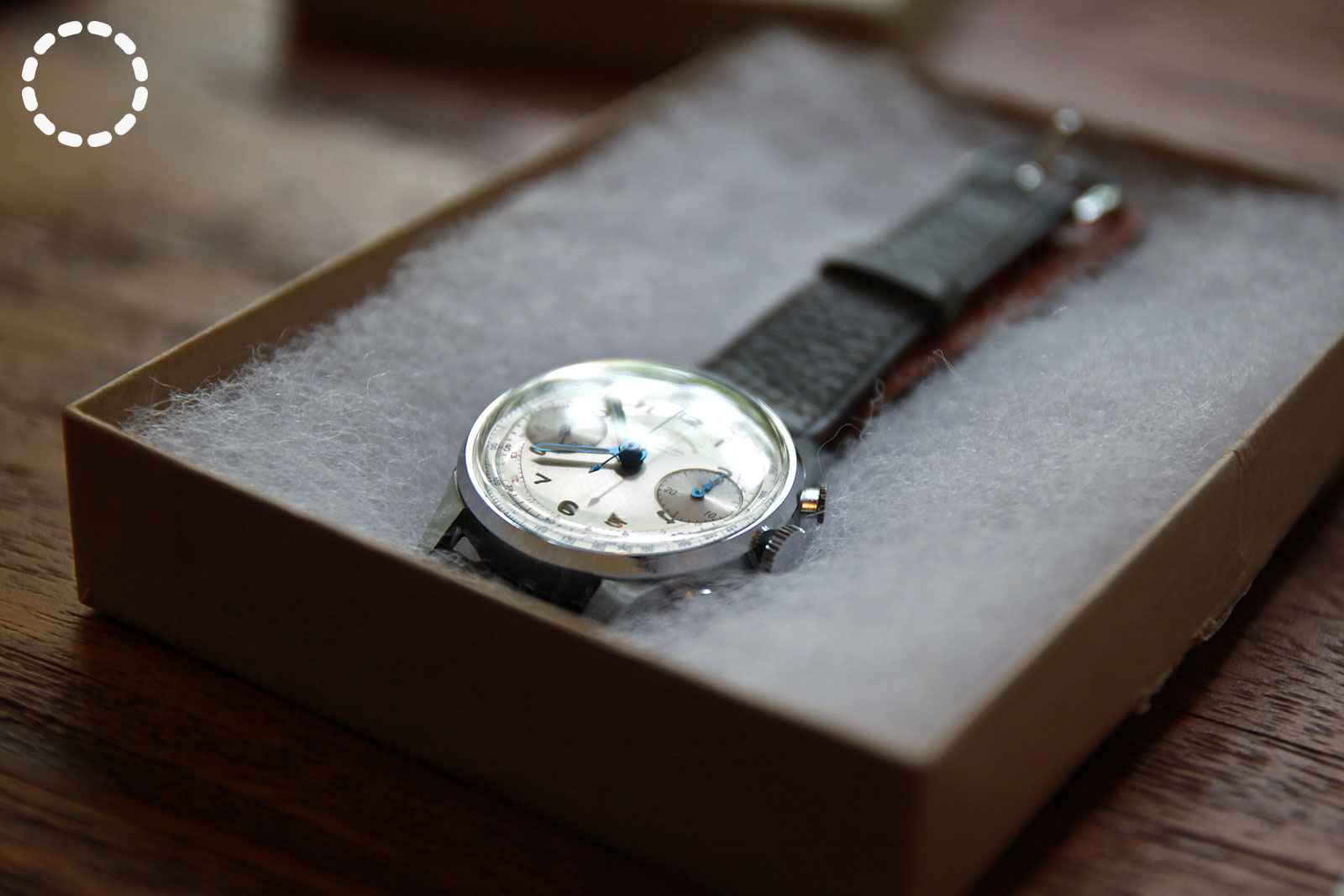 One day I stumbled upon @tbwatches on Instagram, which had for sale a watch I’ve never seen before, a 1940s Bovet Mono-Rattrapante chronograph. It did seem too good to be true: new old stock condition, with all matching lume – meaning the radium on the dial and hands was similar aged – an unpolished case, and what intrigued me the most, the original strap and buckle.

At the time, I didn’t know anything about the watch or its unusual complication. But as I dug deeper, I was amazed as just how rare and how special the Mono-Rattrapante is compared to other watches from the period, especially at its particular price point. As I previously only bought watches new from authorised dealers, buying a vintage watch online seemed a bit odd and also scary. I wasn’t easily convinced that it would be a good idea to buy a watch from halfway round the world and have it shipped to my front porch. But since I’m one for risk taking, I went for it. And sure enough, several weeks later it sits happily on my wrist. What fascinated me most about the Bovet is its complication. I had never come across the Mono-Rattrapante before. Being a “mono-rattaprante”, it naturally has to do with a split-seconds chronograph, which is a common complication. But whereas a conventional rattaprante has two seconds hands to record two elapsed times, a mono-rattrapante has just one. How does that work you ask?

What makes it special is its ability to make the chronograph seconds hand “jump” from one elapsed time to another. Holding down the pusher at four o’clock temporarily halts the elapsed seconds hand, allowing for the elapsed time to be recorded. When this pusher is released the chronograph hand instantly jumps to catch up to the current time and continues recording. The pusher at two o’clock performs the normal functions of start, stop and reset. Today, my preferences in watches has evolved drastically from when my passion for watches started two years ago. Generally, my taste tends to simple vintage chronographs like the Tissot 33.3, Longines 13zn, Universal Compax, and of course, the infamous Rolex Daytona. They are functional and purposeful. Whether they are Speedmasters or Autavias or anything else, vintage chronographs are almost all beautiful in their own respect.

Most collectors have diverse tastes, and so do I. My other passion is military watches. There is something special about military-issue timepieces that excites collectors, whether it’s a Rolex Milsub or a Fuerza Aérea del Perú (FAP) chronograph. They are all beautiful in their own way, the ultimate functional tools. These watches weren’t originally meant for normal people, civilians like me, but for those in high risk, specialised jobs, like mine clearance divers, soldiers or even pilots. It’s wrong but right to wear one. Vintage watches can also be good value. As my budget isn’t astronomical and vintage chronographs are quite costly, I usually look for watches that I feel are undervalued in today’s market.

But what I love most about vintage watches is that we have little or no clue of where they’ve been or where they come from. The wealthiest man in Paris could have bought that Patek Philippe ref. 530 as a 50th birthday present and kept it in a safe for the rest of his life – hence the new old stock condition – or maybe a farmer saved up for years to acquire an Omega and wore it proudly for years. As the owner of a vintage watch, we become a part of its history.

Jason Susantyo is a student in Jakarta, Indonesia. His abiding passion in life is vintage watches. He hopes to become an architect and watch collector.