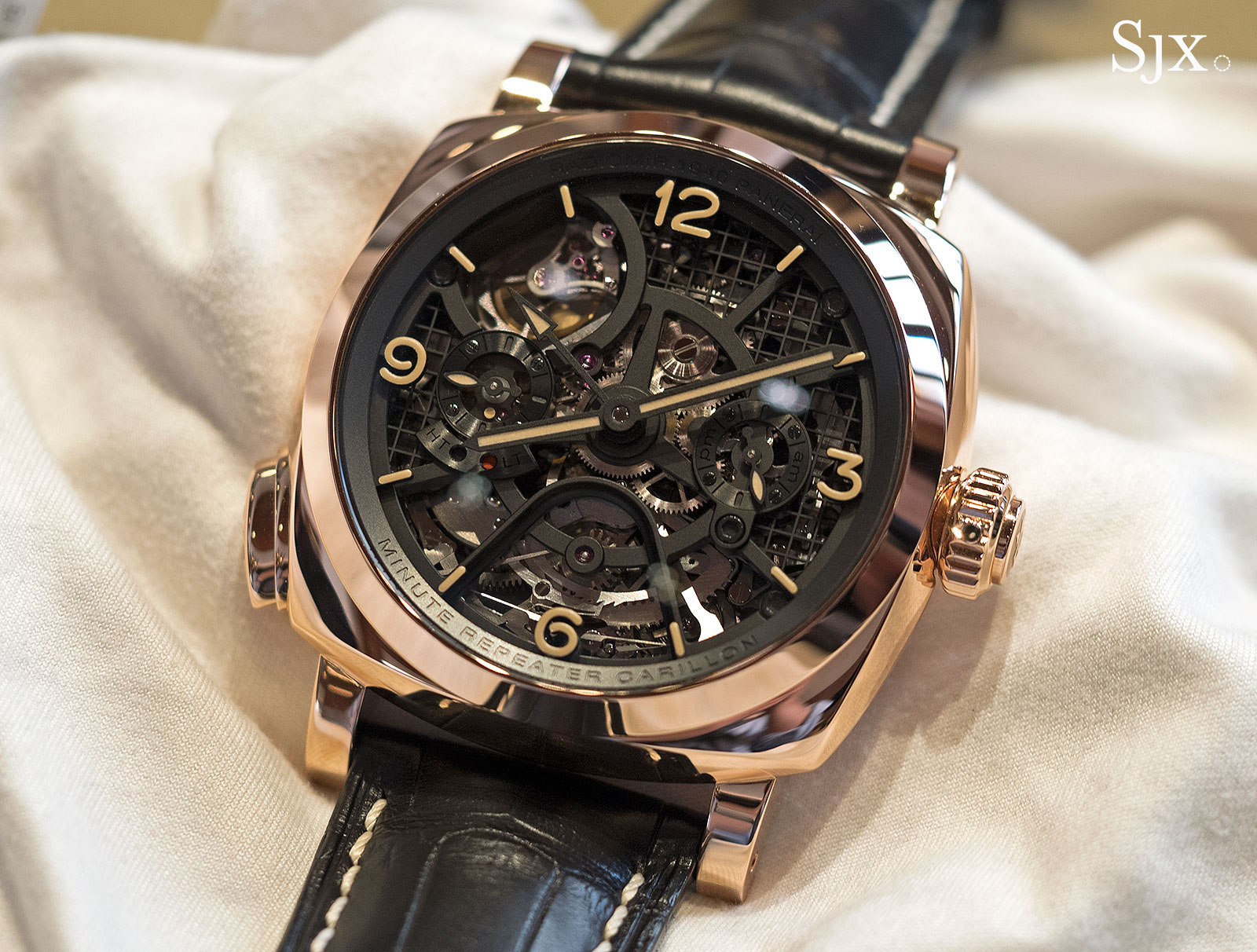 Panerai has been hyperactive in 2016. Though it started gently at SIHH 2016, Panerai quickly followed with a slew of watches in May, including the surprisingly slim Luminor Due. And then just last week the Italian brand unveiled a quartet of blue-dial, boutique-only limited editions. In between that breathless pace of new launches, Panerai also took the covers off the most complicated, and expensive, wristwatch ever to carry the Panerai name – the Radiomir 1940 Minute Repeater Carillon Tourbillon GMT PAM600.

From torpedoes to tycoons

The PAM600 is an impressively complicated, perhaps even clever, timepiece that is at odds with Panerai’s history. The brand began as a supplier of instruments to the Italian navy; Officine Panerai translates as “Panerai workshops”. Panerai instruments included waterproof wristwatches that were first made by Rolex, and then by Panerai itself, with its greatest hit coming in 1950 when the Luminor with its distinctive crown locking mechanism was invented.

Most famous for being standard issue for the commando frogman of the Italian navy who rode astride torpedoes to plant mines on Allied ships, Panerai has built its stout brand on those reliable military foundations. But it’s hard to place a US$400,000 minute repeater in that all-star line-up of action man watches.

Incongruent as it is, the (take a deep breath here) Radiomir 1940 Minute Repeater Carillon Tourbillon GMT PAM00600 is an interesting, managing to make a familiar complication different without crossing the line into pointlessness. It has two important complications, a decimal, carillon repeater as well as a second time zone striking function, along with a less important one, Panerai’s trademark barbecue spit tourbillon. The helpfully labelled button to activate the repeater

While normal repeaters have a pair of hammers and gongs, the Panerai repeater has three sets, explaining the carillon label. The first gong sounds the hours, while the second sounds a triple strike for each ten minute interval. And then the remaining minutes are struck on the third gong. It’s a lengthy sounding process, but a pleasing and intuitive one. The decimal strikes are easier to decipher than on a traditional quarter-striking repeater; while uncommon Panerai is not the only one with such a repeater, Lange offers a Zeitwerk version and Voutilainen is well known for his.

Above: The repeater striking while amplified by a soundboard

Not only is the repeater a decimal striker, it can also sound a second time zone. It’s a gimmick, but an intelligent one. The crown can be used to select the time zone, with “HT” and “LT” at nine o’clock, short for “home time” and “local time”, indicating what time zone is being sounded.

The sub-dial at nine o’clock is the constant seconds, while day and night for home time is shown at three o’clock. A speedier read of the second time zone is available via the arrow-tipped hour hand. To show off all the intricacies of the repeating mechanism, the dial is an open-worked grid over the P.2005/MR movement. It gives the watch a complicated look – perhaps potential buyers need assurance? – that is enhanced by the tourbillon visible at 11 o’clock. Rotating on a plane perpendicular to the dial, the tourbillon is unique to Panerai and possible only because Panerai cases are thick enough to accommodate it. The complicated look continues on the back, with an industrial design-esque skeleton bridge with lots of gears slung across and the hammers for the repeater at six o’clock. Most of the back of the movement, just like the front, carries a matte black coating that has a military flavour. It also means the finishing of the movement is muted, though the steel parts and gears are properly finished. Nonetheless the point of the movement is obviously engineering and complexity rather than artisanal decoration.

In action the repeater is surprisingly loud, despite the colossal 49mm case. The case has been constructed to optimise the sound, first by building it out of two horizontal halves soldered along the middle line of the case, and by hollowing out the interior. That being said, it’s likely that the repeater would sound better, mainly louder, in a lighter or smaller case. Though there are no plans for a titanium case, who knows? The PAM600 decimal repeater is ingenious, intricate and well conceived. But it also makes little sense. Priced at €359,000, that’s about US$400,000, the repeater costs 100 times the average Panerai wristwatch. Being beyond the reach of the typical Panerai buyer, the minute repeater is about extending the brand further up the income scale. But with a lot of high-end timepieces in the world, it is hard to stand out.

Rather than being the herald of a bold and bright future filled with lavish and talented complicated watches, Panerai’s decimal repeater seems more like the last great, Gatsby-esque party before morning dawns on the dominion of the entry-level watch.

Correction August 10, 2016: Contrary to an earlier version of the article, titanium cases are not currently available.

The most complicated Panerai ever, the PAM600 features a three-gong decimal repeater that can chime local or home time, plus Panerai's signature perpendicular tourbillon. Here's all you need to know, including pricing.