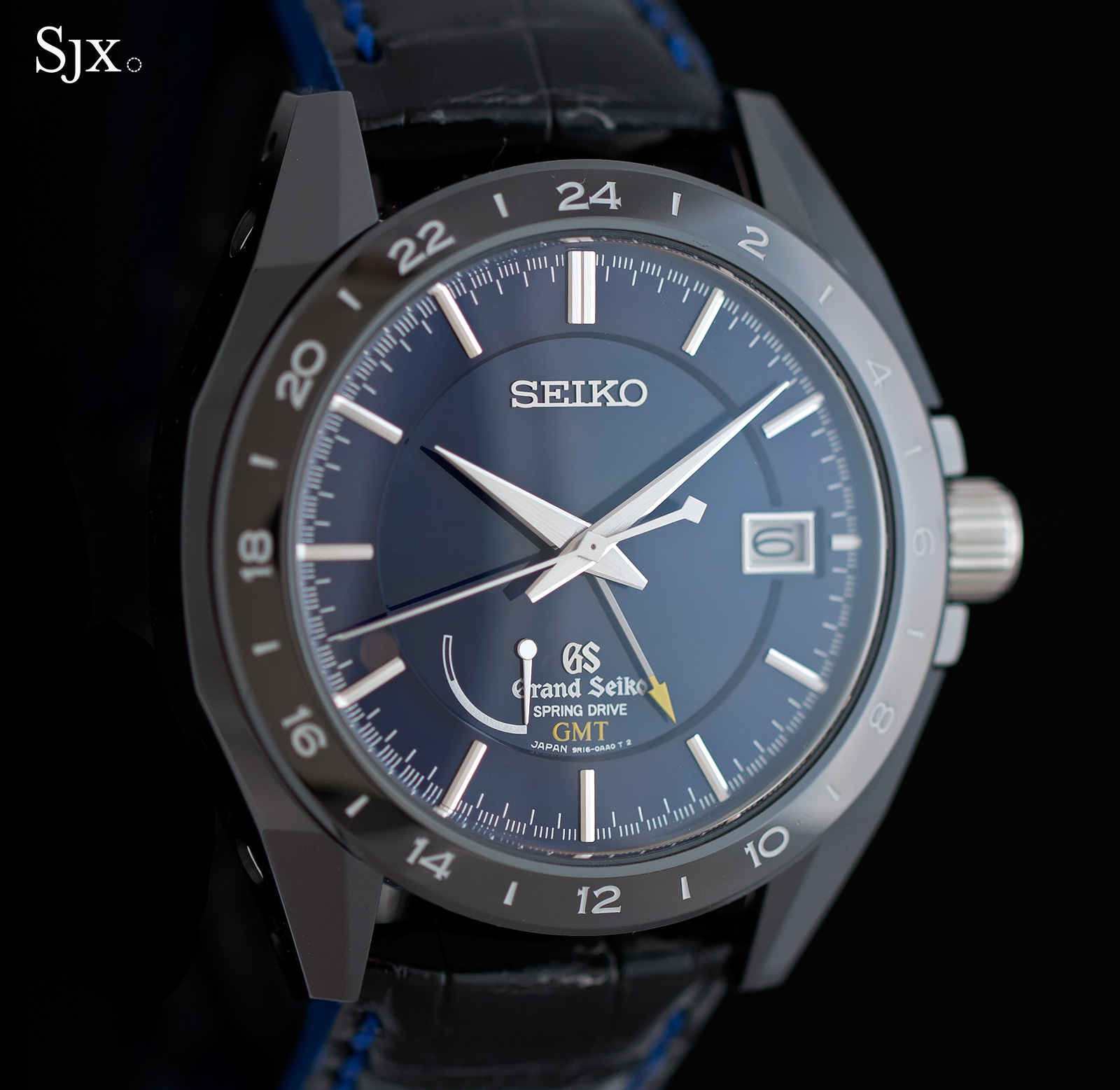 The Black Ceramic collection is made up of a quartet of limited editions, available either as a Spring Drive Chronograph (SBGC015 and SBGC017) or Spring Drive GMT (SBGE037 and SBGE039), the”Avant-Garde” is not merely a facelift. The case construction and materials are significantly more complex than an ordinary Grand Seiko.

Though the case looks entirely ceramic, the zirconia ceramic is actually cladding on an inner case made of Bright Titanium, Seiko’s proprietary alloy that’s about 50 percent harder than ordinary titanium. Two screws on each side of the case hold down the ceramic cladding. A glossy black, or even dark grey, the zirconia ceramic is virtually scratch-proof – with a surface hardness seven times that of stainless steel. The combination of materials makes the “Avant-Garde” a quarter lighter than the equivalent model in steel.

Though the materials has changed, the precisely defined edges of the case that are a Grand Seiko hallmark have been retained. The lugs have a sharply faceted surface with a mirror polish, with visible screws on the sides. Both the GMT and chronograph models are equipped with a specially adjusted Spring Drive movements rated to +/-0.5 seconds a day – to a maximum of +/-10 seconds a month – twice as precise as an ordinary Spring Drive movement. The superior timekeeping is the result of specially selected quartz crystals – remember that the Spring Drive is a mechanical movement with an oscillator regulated by a circuit. A solid gold Grand Seiko lion medallion inset on the rotor indicates the finer tuning of these movements. The movement finishing is typical of Grand Seiko, with precisely defined edges that accomplished by machine.

While the case design is new, the dial hews closely to the quintessential Grand Seiko look. The dauphine hands are impressively finished, with razor sharp, diamond-cut facets and a brushed top surface. Each of the baton hour markers is similar finished, and the old school Gothic font logo is still found on the dial. Long the top of the line Grand Seiko movement until the Spring Drive 8 Day Power Reserve made its debut at Baselworld 2016, the Spring Drive chronograph calibre 9R96 is found inside the flagship “Avant-Garde” watch. It has a three-counter chronograph, power reserve display as well as GMT hand. The column wheel inside the Spring Drive Chronograph

Imposing on the wrist with a diameter of 46.4 mm and thickness of 16.1 mm, the black ceramic Spring Drive Chronograph is hard to miss. That being said, it has smaller, screw-less pushers, unlike the standard Grand Seiko chronographs which have enormous, screw-down buttons. The Spring Drive Chronograph is available in two guises. More unusual is the 600-piece SBGC017, featuring a forest green dial decorated with a tree motif guilloche that’s inspired by Onbashira, a festival that’s over 1000 years old. Held every six years near Lake Suwa in Nagano, the same area where the Seiko workshop producing Grand Seiko Spring Drives is situated, Onbashira starts with the felling of large trees, with the resulting logs being dragged and ridden down the mountain. The second chronograph model SBGC015 is limited to 500 pieces, featuring a dark brown dial similar inspired by the forests around the Seiko Suwa factory.

The Spring Drive GMTs are powered by the calibre 9R16, featuring a power reserve indicator as well as dual time zone function displayed via a GMT hand. Both dual time zone models are also limited to 500 pieces each. Fitted with a dark brown dial similar to that on the Spring Drive Chronograph, the SBGE037 has red accents on the dial. And the SBGE039 has a deep blue dial with gold accents. The Grand Seiko “Avant-Garde” will reach stores in July 2016, with pricing as follows: