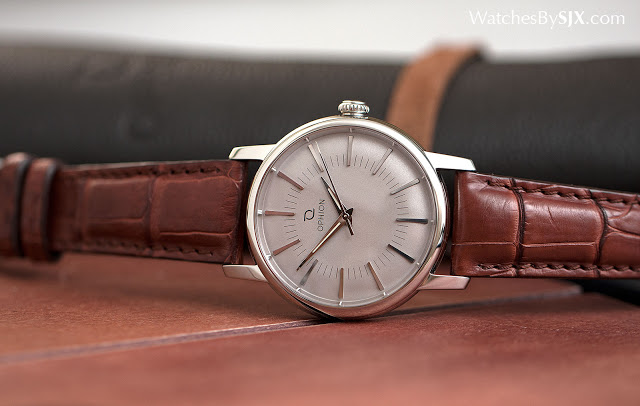 Madrid-based watchmaking startup Ophion made its debt with the OPH 960, an affordable gent’s wristwatch powered by a hand-wound, five day power reserve movement. Priced at €1305 (about US$1430), the OPH 960 is a fuss-free timepiece with an attractively detailed dial.

Ophion is named after the Greek deity who was the father of Kronos, the god of time. Despite the mythological name, the OPH 960 doesn’t try to do a lot, instead focuses on being simple but well executed.

Though based in Spain, Ophion outsources the entire watch to specialists in Germany and Switzerland. German firm Fricker is responsible for the case. while the dial and movement are Swiss made.

The case is a largish 42 mm, a size accentuated by the lengthy lugs. At just under 9 mm thick (not counting the crystal), the case has slim proportions, despite its diameter. A domed sapphire crystal suits the retro look, though a smaller case size would be appropriate given the vintage styling. Offering more detail is the dial, available in dark grey or silver (pictured here). Slightly domed, the dial has a fine grained finish with unusually shaped hour markers. The baton markers curve upwards towards the centre of the dial, a pleasing contrast to the downward curve of the dial. Subtle Super-Luminova strips are painted on the dial flange, the rim between the dial and crystal. They aren’t obvious, but do their job in the dark.

The movement is courtesy of Technotime, a Swiss company that makes affordably priced movements. Instead of the usual ETA or Sellita movements typically found in similarly priced watches, inside the OPH 960 is the TT 718, a manually-wound movement with twin barrels and a five day power reserve.

It’s decorated attractively, albeit entirely mechanically. Blued screws and wide bevels on the bridges give it an appealing look that is not often found in this price segment. Though the movement is covered by a single, large bridge, essentially a three-quarter plate, apertures have been cut into it. They reveal the two barrels and gear train, leaving it looking more interesting than a conventional three-quarter plate movement. The OPH 960 is priced at €1305 before taxes, and is available direct from Ophion Watches.

Introducing The Ophion OPH 960, An Affordable, Classic Wristwatch With 5-Day Power Reserve From Spain (With Prices)

The first timepiece from recently established Spanish watchmaker Ophion is the OPH 960, a gentleman's wristwatch equipped with a hand-wound Technotime movement with a five day power reserve.