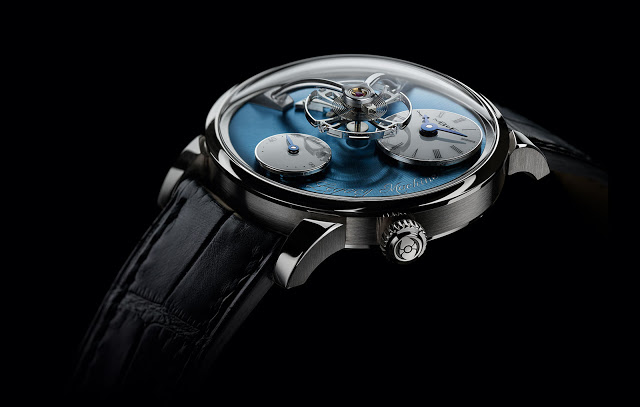 The latest iteration of the entry-level MB&F Legacy Machine has just been revealed: the LM101 in platinum with the trademark pale blue dial, limited to just 33 pieces. You’ll find specs and price below. Originally unveiled as the most affordable MB&F “machine” – a title it has since ceded to the HMX – the LM101 is now available in platinum. And like all other platinum Legacy Machines, the newest LM101 has a striking blue dial. It will be officially unveiled at SIHH 2016, where MB&F will be an exhibitor, along with eight other independent watchmakers, for the very first time. Besides the case metal and dial colour, the new LM101 is identical to its 18k gold siblings. Inside is a hand-wound movement with a classically inspired design featuring undulating bridges and jewels in gold chatons. It was developed in-house by MB&F, but with the help of Kari Voutilainen for the finishing techniques and look. Its most distinctive feature is the oversized balance wheel over the dial, with the sub-dials for the time and power reserve below. The case is a modest 40 mm in diameter, and some 16 mm high, with most of that height due to the large domed crystal to accommodate the arched bridge for the balance wheel. While the 18k gold versions of the LM101 are part of the regular collection, the platinum model is limited to 33 pieces, priced at SFr68,000 before taxes. 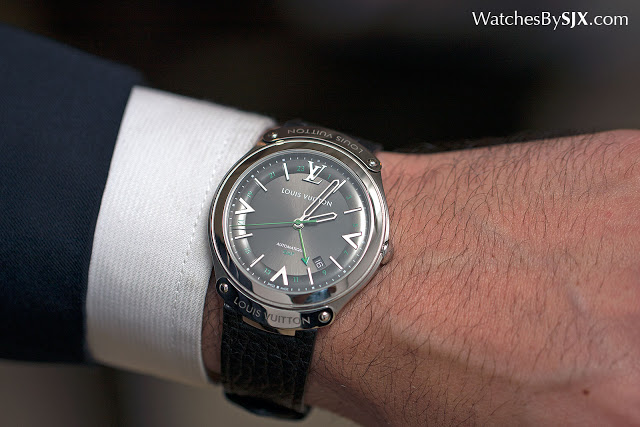 Conceived as its entry-level mechanical wristwatch, the LV Fifty Five has a sleek, thin case  that is almost retro, being inspired by timepieces of the not too distant 1980s and 1990s. Another inspiration are the aluminium trunks made by Louis Vuitton in the 19th century, while its name is a play on the initials “LV”, which mean 55 in Roman numerals.

The slim form of the LV Fifty Five is starkly different from the drum-shaped Tambour or the more recent Escale. Though new, its shape is strangely familiar, being heavily reminiscent of watches like the Ebel Wave, TAG Heuer Kirium or Tiffany Streamerica. Conceived by designers like Hysek and Giugiaro, such watches were emblematic of the late 1980s and early 1990s, the LV Fifty Five leans heavily on them for inspiration. Scattered throughout the design are references to Louis Vuitton, the most obvious being the “V” shaped hour markers and logo at 12 o’clock. Even more obvious are the two metal plates bearing the brand name are affixed to the case at 6 and 12 o’clock, modelled on similar name plates on vintage Vuitton trunks.

Being made in-house at Louis Vuitton’s impressive facility in Geneva, the dials are notably well made, with appealing colours and finishing. The dial is subtly complex, being made up of two parts, a sunburst brushed centre portion and a domed chapter ring for the hours. Each of the hour markers is slightly longer than the chapter ring, making it resemble a frame for the dial. The LV Fifty Five line-up is made up of three models, starting with the GMT Automatic at the top end. It’s 41 mm in diameter, but like all the other watches in the collection, wears smaller than it is. The dial is dark grey with green accents, while the movement is an ETA 2893. The next model is 36 mm wide, with a bright silver dial that resembles aluminium. Intended to be unisex, it’s small size means it’ll more likely be worn by ladies. This is powered by an ETA 2892. And the smallest model is a 31 mm quartz model, also with a silver dial. All three are offered either on an integrated bracelet, or a soft, unpadded leather strap with a folding buckle.