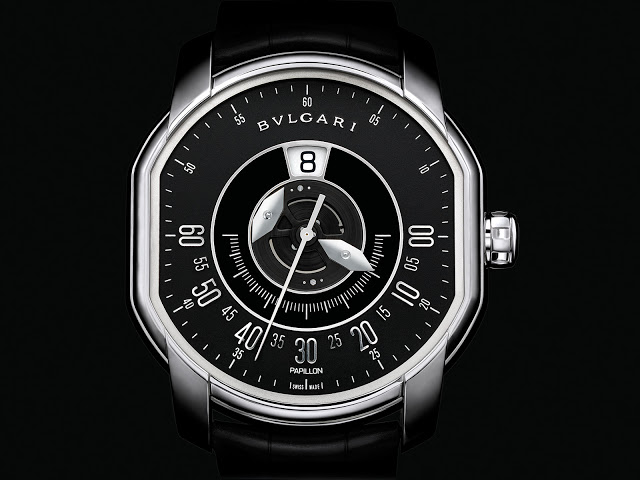 Distinguished by its jumping hours and wandering minutes, the Papillon was the iconic wristwatch of Daniel Roth, the independent watchmaker acquired by Bulgari in the year 2000. Now it’s been facelifted and reintroduced as the Papillon Heure Sautante, preserving the innovative time display mechanism while streamlining the brand’s signature double ellipse case. The Papillon’s novelty lies in its time display: hours are shown in a window at 12 o’clock, while the minutes are indicated by a hand travelling across a semicircular arc running from three to nine o’clock. On the original Papillon the minute hands were covered, revealing only the tip, making it seem like a retrograde display. But instead of jumping back to zero, the display actually comprises a pair of minute hands, with one retracting and the other simultaneously extending at the top of each hour. Each hand is driven by a Maltese cross, similar to what lies behind the Audemars Piguet Star Wheel and Urwerk UR-105 wandering hour displays. The base movement is an automatic calibre made in-house by Bulgari. The case is a large 45mm in diameter, available in pink or white gold. A case shape designed by Daniel Roth (who now makes watches under the Jean Daniel Nicolas name), the double ellipse case features clean lines and a domed crystal (often termed a “box-type” crystal) that sits directly on the case band, without a bezel. 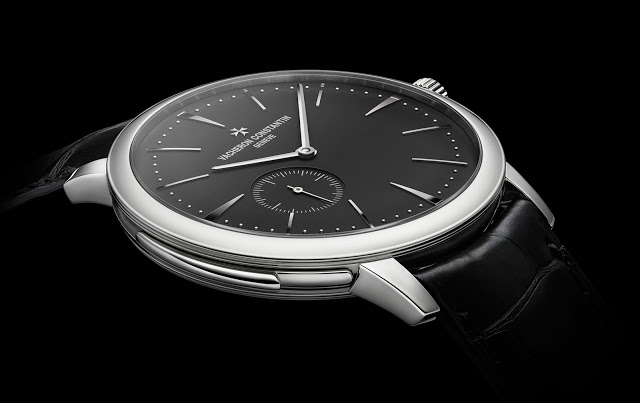 First introduced in 2013 in pink gold, the Patrimony Contemporaine Ultra-Thin Calibre 1731 is equipped with the thinnest minute repeater movement found in a wristwatch. A mere 3.9mm high, the entire watch stands just just 8.1mm. Now Vacheron Constantin has introduced two more variants of the ultra-thin repeater, both in platinum.

Precious but heavy, platinum is not the best material for a minute repeater case, because its density impedes the transmission of sound waves. That being said, platinum is one of the most popular case materials for minute repeaters, because it is the most expensive alloy. Patek Philippe, for example, delivers more repeaters in platinum than in gold, according to former president Philippe Stern. Case material aside, the new Patrimony Contemporaine Ultra-Thin Calibre 1731 is the same as the pink gold model. The movement is hand-wound with a 65-hour power reserve, and like all other mechanical movements by Vacheron Constantin, hallmarked with the Geneva Seal. Administered by the government of Geneva, the seal dictates standards of decorative and functional quality for watches made in Geneva. The  Patrimony Calibre 1731 minute repeater in platinum is offered with a black or silver dial and is priced at S$633,400 including 7% tax in Singapore. That’s equivalent US$451,000.