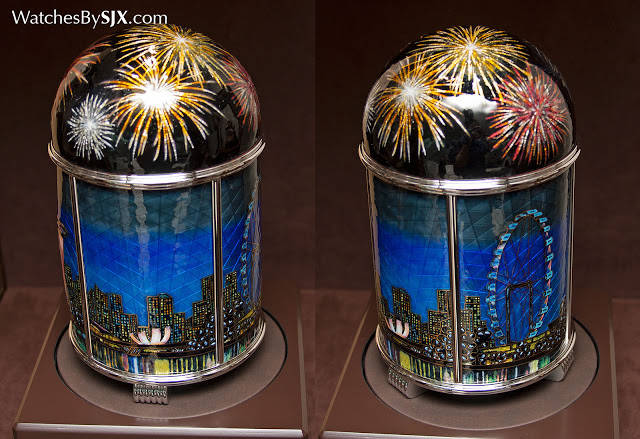 Singapore celebrates its 50th year of independence in 2015, which also happens to be the 50th year since Patek Philippe opened its first office on the island nation. A trio of Dome Clocks to commemorate Singapore’s Golden Jubilee have just been unveiled, each decorated from top to bottom in remarkably rich cloisonné enamel. Each of the three Dome Clocks is a one-off masterpiece featuring motifs inspired by Singapore and its culture, slated to go under the hammer to raise at least S$800,000 for local charities.

Patek Philippe Dome Clocks are rare – only a dozen or so are made a year – and valuable, retailing for at least six figures and selling for as much at auction. Launched in the 1950s and in production ever since, the Dome Clock is not as well known as Patek Philippe’s wristwatches, but still a quintessential Patek Philippe timepiece. Characterised by their cylindrical form and spherical top, Dome Clocks were solar powered until recently, when the switch was made to quartz movements, as found in this trio of clocks.

The “Tribute to Singapore’s Golden Jubilee” clocks are all unique pieces, made for Singapore’s 50th anniversary, an occasion also marked by several other watchmakers. Table clocks measuring 21.35cm high (about 8.4-inches), the clocks are covered in cloisonné enamel depicting motifs draw from Singapore culture and history. Each will be auctioned during a dinner on September 23, with the entirety of the proceeds going to various charity.

The most unusual, and also the most expensive, is Ref. 1677M “The Esplanade – Singapore” clock that depicts Singapore’s skyline as seen from Marina Bay. It stands out for its colours – dark blue and black are rare in enamel – as well as the decoration, a stylised skyline of Singapore on National Day, with fireworks lighting up the night sky. The blue-black of the sky is filled with a repeating triangular pattern that’s modelled on the roof of The Esplanade Theatres, another key feature of the Marina Bay skyline.

Practically the entire clock is enamelled, even the Breguet numerals on the chapter ring are black enamel. The enamel is painted over silver panels that form the body of the clock, with hand-engraving used to create the fireworks and details of the skyline. Silver leaf is found under certain sections of translucent enamel to create sparkle, most notably for the fireworks on the dome. Most of the motif was created with cloisonné enamel, a technique that uses fine gold wire just 0.2mm wide to form cells which are then filled with enamel. Some 6.25 m of gold wire was required for the clock, which called for 20 colours of enamel. Each section of the clock required 11 trips to the oven to complete. This clock was created by the enamel artist with the initials “YL”, as signed on its body. Bidding for the Ref. 1677M “The Esplanade – Singapore” starts at S$300,000. Proceeds from the sale of this clock will go to the Community Chest, a charity that funds social services in Singapore. A compilation of 477 drawings of plants and animals native to Singapore and Malacca, a port city in Malaysia, the Farquhar collection was commissioned by William Farquhar, colonial Singapore’s first Resident, a post equivalent to governor. It was painted by anonymous Chinese artists between 1819 and 1823, during Farquhar’s tenure as Resident. Donated to the Royal Asiatic Society in London after Farquhar left Singapore, the drawings were eventually acquired at auction and returned to Singapore by Goh Geok Khim, a local stockbroker. They were donated to the National Museum of Singapore, the recipient of the proceeds from the sale of this clock. The Ref. 1675M “Farquhar Collection” uses 32.55 m of gold wire and 78 colours of enamel to reproduce the flora and fauna from the Farquhar collection. Between 8 to 14 firings were required for each section of the clock. The signature “JR” is visible on a corner of one of the body panels.

The third Dome Clock of the series is the Ref. 1665M “Peranakan Culture”, named after the descendants of the first Chinese settlers in British Malaya, which included Singapore, many in the 1400s to 1600s. These immigrants assimilated into the local Malay culture, adopting both language and custom; Peranakan in the Malay language meaning “descendant”.

Brightly coloured Peranakan porcelain, much of which was produced in the Chinese porcelain capital of Jingdezhen, provides the inspiration for the “Peranakan Culture” Dome Clock. The clock is finished in blue-green enamel that’s the same shade as found on many Peranakan porcelain objects. Though the colour and motif is recognisably Peranakan, it is not a replica of Peranakan motifs. Instead of the peony that is traditional in Peranakan ware, the Dome Clock is decorated with roses, a flower also found on other Patek Philippe enamelled clocks. Some 28 m of gold wire was used to form the Peranakan motif, depicted with 14 colours of enamel. Each panel of the clock had to be fired seven to eight times to set. Created by the same artisan responsible for the Esplanade Dome Clock, The “Peranakan Culture” Dome Clock starts at S$250,000. Its sale price will be donated to the Peranakan Museum. Each Dome Clock is a one-off creation, delivered in a fitted presentation box along with a large leather folder detailing the clock and its creation.

Their sale will take place on September 23 in Singapore. Rather than accepting bids via phone and fax, only attendees at the dinner are allowed to bid in person, because company President Thierry Stern wants the clocks to go to bidders who are both Singaporeans and Patek Philippe collectors.