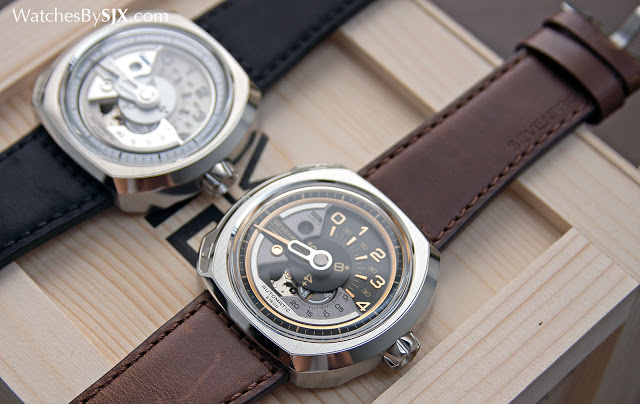 SevenFriday‘s formula for success, and it has been exceptionally successful, has been to combine funky, unconventional design with an elaborate dial, But thanks to low-cost manufacturing, SevenFriday watches are affordable, priced at about US$1000. Put simply, their key appeal is that they don’t look like other watches in the price range.

The V-Series is a wholly new look, but it sticks to the same fundamentals that made the preceding P-Series and M-Series bestsellers. Big and bold, the V-Series has lots of wrist presence, though the time display is unexpectedly confounding. Importantly, most of the expense has gone into the dial, which makes it look more expensive than similarly priced watches. Consequently the satisfaction to price ratio is high.

The basics Available in two guises for now, the V1/01 and V2/01, the V-Series is named after the subtle “V” motif that recurs in the watch design. The twin “ears” on the left of the case and the crown form a “V” on its side. A soothing combination of blue and white, the V1/01 is the the more restrained of the pair, while the V2/01 in black and bronze is more striking. Expect a lot more colours to come in the future.

The V-series watches are large, measuring 49.7mm in diameter and 44.3mm long, with a noticeable heft on the wrist. However, because the V-series lacks lugs that stick out of the case (the strap is attached just under the edge of the case), its effective size is similar to a small conventionally shaped case.

The time display is curious, and initially, difficult to read. Reminiscent of mathematical brain teasers, the hours are indicated by the disc at the centre of the dial. The numerals on the disc have to be added to the numerals on the fan-shaped scale that runs from 11 o’clock to 3 o’clock. The difficulty of reading the time is compounded by the fact that what is normally the 12 o’clock position, or the zero point of an hour scale, is occupied by “1”.

The time shown below, for example is 7:41 am. It’s derived from “4+” and “3”. And the day and night window on the left is white, meaning daytime. Reading the seconds is similarly challenging, also requiring additive skills. Minutes, fortunately, are indicated via a conventional minute hand.

It takes a couple of days to get used to, but then it becomes more intuitive. Another solution is to ignore the numerals on the dial, and use only the numbers on the central disc as the hour hand.

Designed in Zurich and made in China

Much of the watch is made in China, but made very well. The dial is particular deserves praise, and is obviously the most expensive component of the timepiece. It’s comprised of several levels, giving the face depth, along with attractive details like contrasting surfaces finishes. The applied markers on the V2/01 are vertically brushed, while the dial is finished with coarse eggshell texture. While most crowns seem to be an afterthought, the crown is admirably large and well defined. In fact it’s somewhat reminiscent of the crowns found on Urwerk watches, like the UR-210S “Full Metal Jacket” for instance. Like all other SevenFriday watches, the V-series is powered by an automatic Miyota movement. Miyota, a subsidiary of Citizen of Japan, manufactures robust and low-cost automatic movements in China. The calibre in the V-series is the 8S27 that has a 40 hour power reserve. Only a tiny bit of the movement is visible – an aperture on the dial at seven o’clock reveals part of the balance and escapement (below). The origins of the watch are etched on the case back, along with a blue plastic insert depicting a world map that is actually a near field communication (NFC) chip. With a SevenFriday application on a smartphone, the NFC chip can be read and the watch authenticated. The owner of the watch can also register the timepiece, as well as sign up for other after-sales services. Unexpectedly, the most impressive feature of the V-Series is Fast Strap Changer (FSC). Unlike similar concepts from other watch brands that are complex and require proprietary straps or attachments, the FSC uses an ordinary spring bar. Each of the “ears” contain a button for the FSC. The button of the FSC is a spring loaded button that secures the tip spring bar, so pressing the button causes the spring bar to pop out. Putting it back in is equally simple, with a channel milled into the underside of the lug that guides the spring bar back into place. Featuring a completely new case shape and an unusual method of displaying the time., the SevenFriday V-Series is the latest from the quirky-but-cool maker of affordable timepieces.