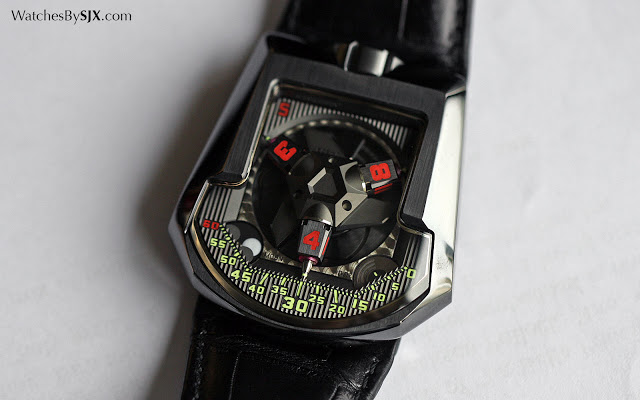 Urwerk only ever made one UR-202S in platinum, and this it it. A perfect example of the ingenious mechanism that displays the time on satellite cubes and a telescopic hand – the complication that put Urwerk on the watchmaking map.

Urwerk‘s best invention to date remains its revolving satellite time display that made its debut not on an Urwerk wristwatch, but on the landmark Harry Winston Opus V, a collaboration between the American jeweller and Urwerk. That evolved into the satellite time display seen here, on this one-off Urwerk UR-202S in black coated platinum. And the same satellite complication is now found on the UR-210. It took a while, however, to get from the Opus V to the current generation. A remarkable and surprising timepiece at the time of its launch, the Opus V was introduced in 2005, but Urwerk only took the covers off the UR-201 two years later. The magic of the UR-201 lay in its revolving satellite time display, something inherited by the subsequent UR-202 and UR-210. The complication is comprised of three cubes, each with four faces and one hour numeral on each face. As the time passes, the cubes travel round the dial, rotating to show the current hour. At the same time, a telescopic minute hand extends to point the minutes, travelling clockwise together with the cube. The first generation of its satellite display was a short lived one, with about 10 watches (the edition was known as the “Black Shark”) made before the UR-201 was discontinued. It was replaced a year later by the UR-202, an example of which you see here. This example of the UR-202 is a special one for several reasons. For one the case is black coated platinum, traditionally the material of choice for Urwerk’s top of the line models.

And it’s a UR-202S, with the “S” suffix standing for “stripe”, a reference to the pinstripe guilloche of the dial. Most unusual is the colour combination, which has the hour numerals on the satellites in red, while the minute track is in a yellowish-green. The main reason the UR-201 was phased out was the hand-wound base movement from La Joux-Perret, which suffered from a lack of spare parts for after-sales service because the movement was no longer produced. So that was replaced with a self-winding movement, first a Girard-Perregaux calibre and now a Zenith Elite. The switch to an automatic movement led to the development of another feature now an Urwerk signature – the turbines on the case back. Linked to the winding mechanism, the turbines are meant to govern the rate at which the movement is wound and can be adjusted via a switch. A sedentary wrist would mean setting the turbines at full spin to increase the rate of winding, while extreme physical activity calls for stopping the turbines altogether.

For diehard Urwerk fans, there was also a UR-203 unveiled in 2003, produced in a limited edition of 20 watches in black platinum. What made it different was the open-worked minute track and carousel, the star-shaped component that carries the satellite cubes.

Now replaced by the UR-210, characterised by its aggressively styled case reminiscent of a Lamborghini, the UR-202 is not old but feels slightly retro. Paradoxically, despite being the flagship wristwatch of the Urwerk line-up, the UR-210 actually functions similarly to the Opus V that started it all. Just like the Opus V, the UR-210 has a retrograde minute hand, proving that horological history does repeat.